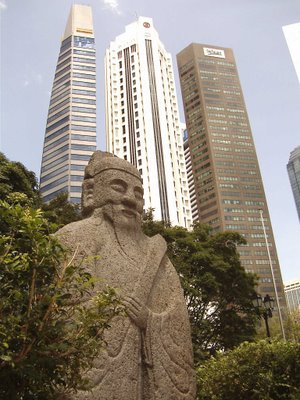 Singapore...the world's marketplace and the west's gateway to Asia 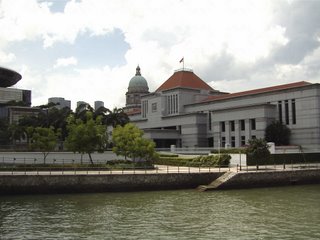 Parliament House with City Hall in the background (dome). It is hard to believe that this is such a small nation. Singapore is the second most densely populated country in the world after Monaco. It's population is 4 million and it is a true city-state. For those of you that do not know, Singapore is a small island at the very bottom of the Thai-Malay peninsula in Southeast Asia. It is also one degree above the equator, making the humidity here outrageous! 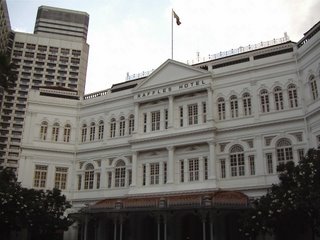 The famous Raffles Hotel. This old building is the temporary home to the most wealthy and luxurious travelers to Singapore...which is very evident by the car park in front: a circular ring of vehicles that all cost more than a large, American home. Raffles is also famous for inventing the Singapore Sling, a refreshing, mixed drink. 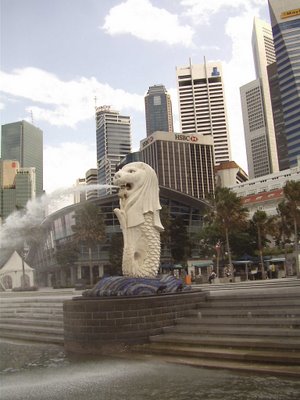 The Merlion...the lion is the symbol of the city. There is a plaque near here with a lovely story explaining how the merlion reresents how so many diferent people can come together on the island and prosper...which they have done quite well. Singapore is an extremely wealthy nation. The government is in control of almost everything, and the whole country is run like a corporation. The people suffer slightly from this in the area of personal freedoms, but from what I have seen so far, they don't mind at all and are quite happy. Last month, for instance, the government did quite well with its investing and was able to give a S$400 cheque to every Singaporean citizen...I wouldn't complain too much about that. Also, for Singapore's brightest minds, they can attend school wherever they want around the world totally cost free thanks to the government...only trick is that they have to work for the government for 6 years when they are done...but from what I heard, if you get this privelege, you are set to go and stick in there. Brilliant ideas like this one are direct results of having the nations most intelligent people working government jobs....how interesting is that?!? Singapore is also highly westernized...English is one of the four national languages and most people speak it fluently. Because of this, Singapore would make a great starting point for anyone that wants to see Asia, but is a little too intimidated by some of the massive cultural and language diferences. 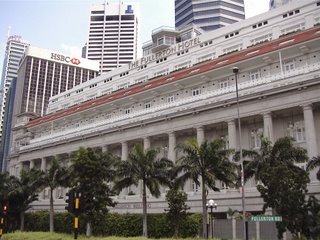 Yet another example of the wealth and amount of money here in Singapore...this massive complex is just one of the many massive hotel complexes in the city, all of which cater to the thousands of international business travelers. Singapore was historically, and still remains a massive international market. Everywhere you go here, there are malls and shops and stores and restaurants and promenades...it is a massive consumer market of both international and domestic buyers and sellers. 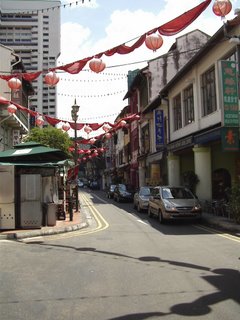 Street in Chinatown. There are four primary districts in Singapore: CBD (central business district), Orchard St. (tons and tons of shopping...I cannot accurately describe just how much shopping there is on this one street...let alone all of the city), Chinatown (famous historically for its gambling, brothels, and opium houses), and Little India. It is possible to walk from area to area, and if it weren't for the oppressive humidity, walking the city would be an absolute joy! 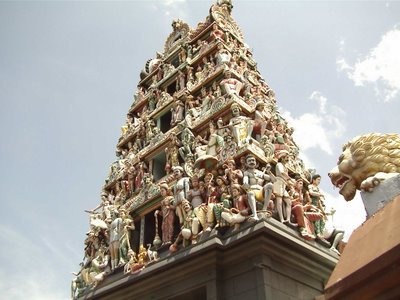 Sri Mariamman Temple in Chinatown. This is the oldest Hindu national monument in Singapore. I love how complex it is with all the incarnations of gods.
Posted by Drew at 11:52 PM

WOW!!!!!!!!!!! Some 'TV travel station' should be paying you for what you're doing!!! Singapore has never appealed to me before this ~ now I feel I must see it one day ~ preferably with you! Thank you for sharing!!!!!!

Susan said...
This comment has been removed by a blog administrator.
4:08 PM

OK, now I feel homesick if that is the right term. Singapore was one of my first Asian destinations 10 years ago and I fell in love with it then...and fortunately got to go a visit a few times in a very short timeframe. I hadn't been back until about 1 month ago and as I had said to you in a note...it had changed, but there was something just so familiar about it that I really felt I hadn't left ... despite the growth around me. you are absolutely right about this being a great place for your first Asian visit, especially if you are intimidated by different lifestyles, languages, customs etc. It truly is a westernized place, but I also think it presents the most diversity I have seen in such a condensed space. And you are right about walking around in the humidity...although I did manage to walk from one end of Orchard Road to the other, and then back down the other side...all for the opportunity to shop :-) I'm glad you are able to stay with someone while you are there. I should ask....so did you have the outrageously priced but oh so famous Singapore Sling at the also famous Long Bar?

This entry brings back a lot of memories. I haven't been to Singapore in years but, as soon as you talked about the humidity, I remember exiting the airport and almost wilting. The way you described everything brought me back to the experience of being there all over again.