Fitzroy and the Melbourne Museum 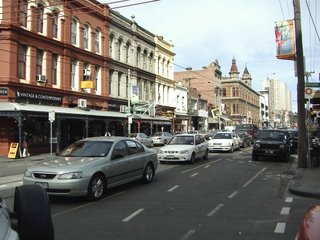 The Melbourne suberb of Fitzroy and its Brunswick St. This is the artistic and bohemian (aka hippy) area of Melbourne, and I loved it! There are tons of book shops, which are supposedly just as popular on a Friday night as the multitude of bars on this street...and all are open late! The street also is home to a great many stores that specialize in weird and unique things. This is also a great place to get some great cheap food! The university is nearby so it is also a prime hang out area for students. Really, really cool street...and the reason it is so cool is because it quite honestly isn't trying to be that way!!! It just is what it is. 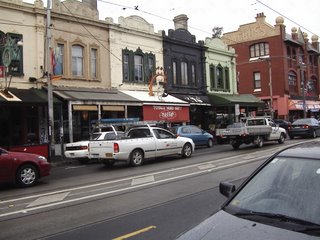 Another pic that needs some zooming in to understand, but that big red banner reads "Totally Weird Shit!"...I thought it was quite funny...almost as funny as the next pics subject... 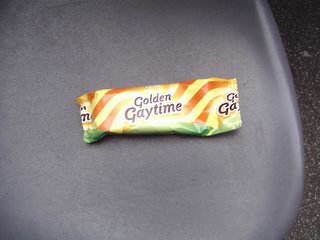 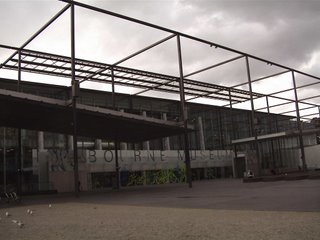 The Melbourne Museum...easily one of the best museums I have ever been to. They had four huge exhibits dealing with Science and Life, Australiana, Aboriginal Peoples and Culture, and The Human Body...there was also a massive forest INSIDE...and a blue whale skeleton...incredible place. 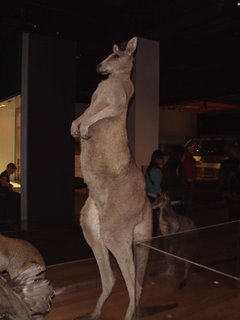 Eastern grey kangaroo shown on its hind legs...this thing was tall...taller than me. Now I know a lot of you are saying...well taller than Drew really isn't saying much...and I say, '[*expletive deleted*]!!!' ;) But honestly, this thing was tall. This is also the type of kangaroo I got to see hopping along by the train on the way to Adelaide from Sydney. 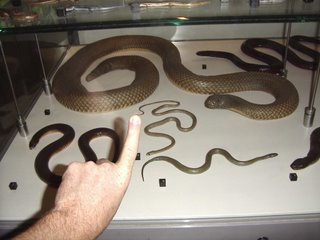 Some of Oz's venemous snakes. Nature didn't mess around when it got to Australia. Of the world's top 25 most deadly snakes, 20 of them call this country home! The biggest one in the picture here (remember that that is about a foot behind glass and perspective is making my finger look a lot, lot bigger than it really is) is the King Brown snake and is quite feared in the outback. Supposedly, if you get bitten by one of these and you are more than a half an hour away from anti-venom then you are just supposed to sit back, relax, and start writing your final goodbye and will...fun eh?!? 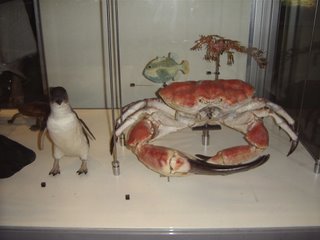 This is no trick of the camera ladies and gentlemen...and those are real dead animals in there too. You are seeing it correctly...that crab is much much larger than that penguin (which stands just under two feet tall). Missy, this is the crab species that I told you about...it is a Tasmanian crab...and it is absolutely massive...I saw one of these alive at the Sydney Aquarium...they really are that big. You could make a great meal from just one of those claws... 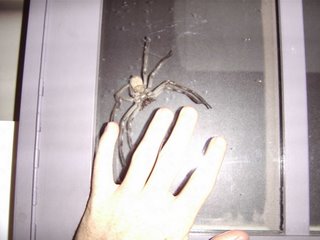 This was their LIVE specimen of the Huntsman spider. This is commonly found crawling around in Aussie households...wouldn't that be a lovely surprise. Good news is that they are harmless to human beings (other than the odd heart attack victim). The spiders to really watch out for are the Redback (a much larger version of the Black Widow) and the stars of the next picture... 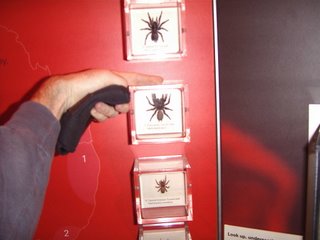 This was one of my favorite parts of the Science and Nature gallery...Australian Funnel Web spiders...arguably the most nasty and deadly form of spider on the planet...and a pretty common beastie in the Sydney area! Their venom is extremely dangerous to humans, and they have two massive fangs that are so long and so powerful that they can pierce a leather boot!!! If you look closely at this picture you can see the fang pouches as the two largest things on the spiders "head". The museum had tons of dead specimens and several live as well!!! I have some demented interest in this particular form of spider so I was just in spider heaven! 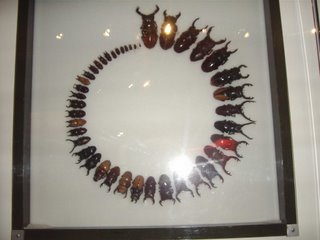 Beetle anybody??? Some of their static insect displays were done up in neat patterns like this...I'm telling you this museum was amazing. They even had one of the very rare giant squid specimens! Another part of the insect world exhibit consisted of entirely live ant colonies. One of them had a big plastic bubble that allowed you to stick your head up and INTO the middle of the colony...another was a colony of Australian bull ants...these nasty creatures are about and inch long, have mandibles that can draw blood with one bite and a stinger with a venom that can cause temporary paralysis in a limb....once again proof that nature meant some serious business when coming up with Australian creatures. 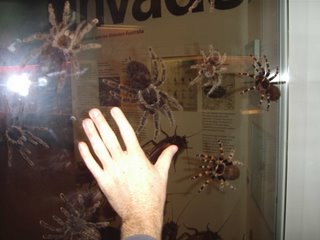 In addition to the native Aussie spiders, the museum also had several large tarantulas...but don't worry folks...these spiders seen here with my hand are really just the shed skins of the live tarantulas. That is actually a bit scarier considering the the live ones were even bigger now. They had tarantula species from all over the world that had been confiscated at the border! Smugglers were trying to get the spiders into the country to sell as pets...and they got caught...and the museum got some live spiders, which are kept in a specially quarantined area since they are not native species. 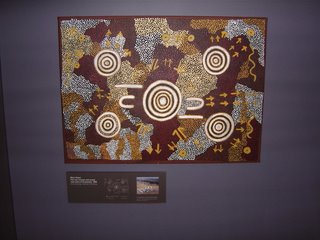 One of the four main exhibits was on Australia's Aboriginal peoples. I love their artwork almost as much as their music. This is just one of the many works I saw on showcase. 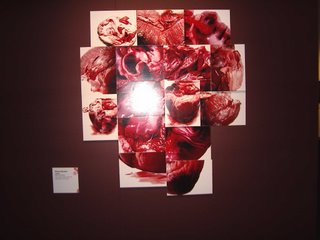 The museum also had a huge exhibit on the human body. This was an interesting work of art showing a bunch of pictures of the human heart put together into the shape of a heart...gory but cool.
Posted by Drew at 2:50 AM

Hello Luv, Sounds like Melbourne will have to be on my list of places to visit before I go on to the next stage of my being! Thanks for the awsome pictures ~ especially great because you used parts of yourself for some real perspective... This sounds like a perfect place for someone who loves to learn but not so great for someone who has a paranoia of spiders and/or snakes! Did Aunt Eloise know about these creepy critters before they visited there ~ I wonder? Please give Aunt Susan a big hug and kiss from me for being so wonderful ~ OK? Love you whole bunches, Mom

Wow, that museum looked REALLY cool. Spiders can give me the heebee geebees but, I find them very interesting. Neal gave me your link--looks like you are having a lot of fun in your travels. Thanks for all the pics.