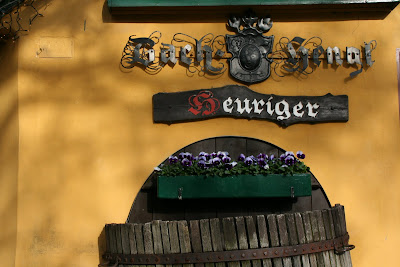 So continuing our Euro-trip 2011, our next stop was in Vienna, Austria, where I had to attend a conference for work. We took the train from Salzburg, which was quite beautiful. It always amazes me how densely packed Europe is yet how they still manage to have such beautiful countryside and general lack of suburbs. I wish the US and Canada would learn to do the same with their rural areas. 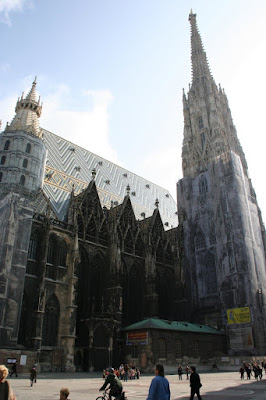 Vienna is a beautiful old city with a rich history. As former capital of the Austrian-Hungarian Empire, it is up there with the other major imperial European cities (Paris and St. Petersburg to name a couple) for post-Renaissance palaces and grandeur. This is the heart of the old city, St. Stephen's Cathedral, which is truly enormous. 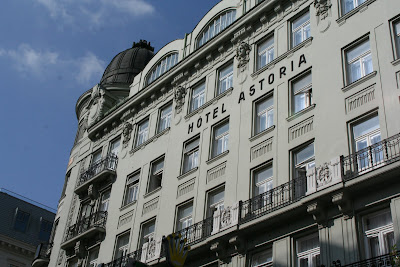 There is much culture and history to be found in Vienna. Plus, the city center, or innertadt, is very easy to wander around on foot. The narrow and winding streets get you lost quickly, but it's so small that you wind up coming back to a familiar place or the outer edge in very little time. 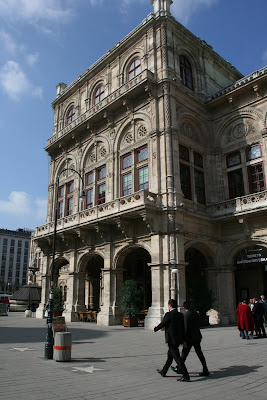 The Vienna Opera House. I'm not a big fan of opera, so I did not attend. However, I've been told that Vienna draws some great international talent, and it's worth a show. 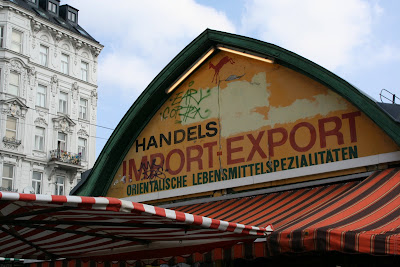 Opera is not my thing; markets and eating, however, are. If you feel the same, the large, outdoor Naschmarkt is a highly-recommended place to visit. 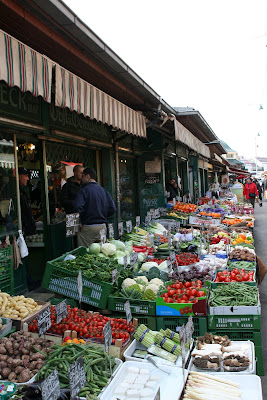 The market consists of fresh fruit, vegetable, fish, meat, dried goods, and spice stalls. Plus, there are plenty of places spanning the cost-spectrum serving up delicious treats and meals. 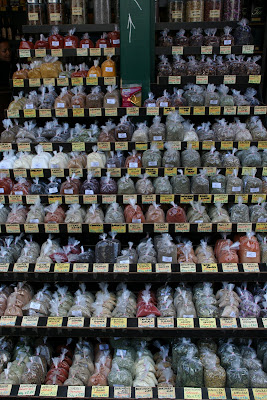 They are apparently very serious about their spices in Vienna. I wish we could find something like this in the States... 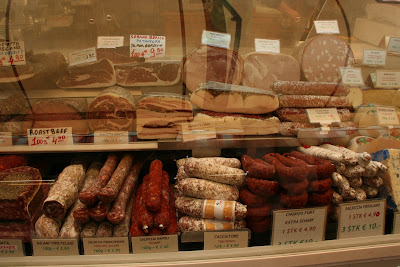 They also had more cured meats than I previously knew existed. 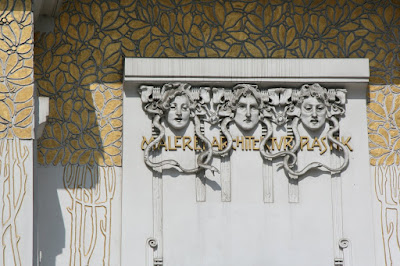 Vienna has some great museums. Missy was able to sample several, though being busy with the conference, I was not. 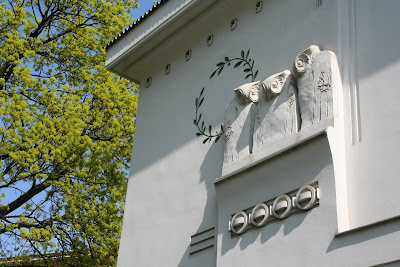 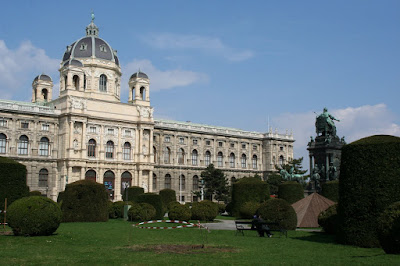 The old, Habsburg palaces have been converted into museums. This is one of two, "twin" palaces just outside of the innerstadt that kick off the Museums Quartier...an entire district of the city devoted to museums! 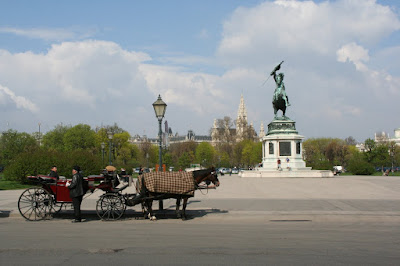 In the backround here, you can make out the Rathaus (Mayor's House). It was at this location that Hitler addressed the Viennese to rally the Austrians to his cause. 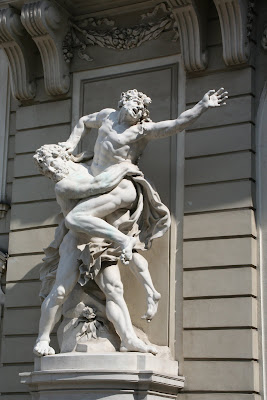 Greek myths capture in marble. Statues like these are all over the Habsburg palaces. 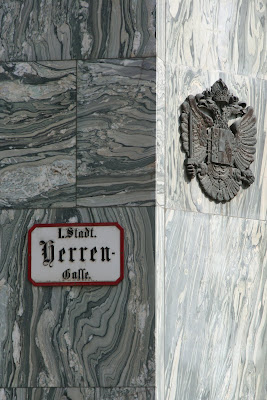 As in Germany, things are very proper in Vienna. 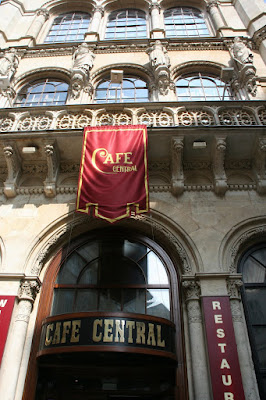 Best cafe ever? Perhaps... especially considering the inexpensive and delicious lunch specials, gorgeous interior, and picture perfect and delectable desserts, for which Vienna is famous. Relaxing inside over a gourmet coffee or sweet treat, you feel like you're some wealthy aristocrat from the turn of the century. I highly recommend seeking this place out! 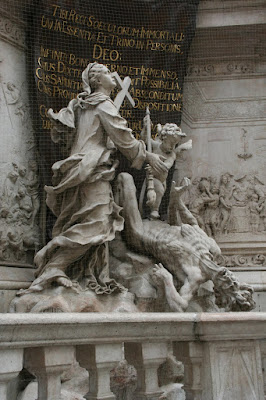 Another public work of art...they are all over the city...this with a cherub plunging a torch into an old hag representing pestilence. 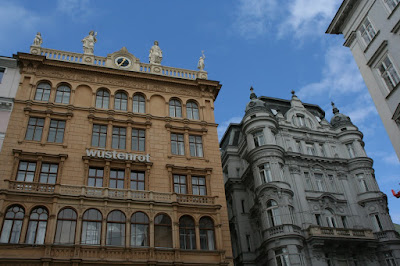 There is an interesting mix of architecture in Vienna... always something to keep you looking up! 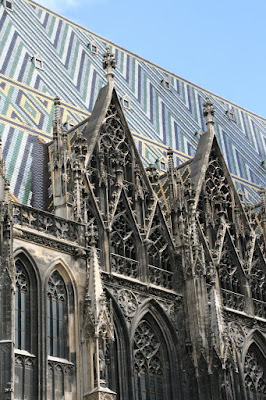 Again at St. Stephen's. Our Austrian friend told us more interesting stories about Vienna. There is a metal stick outside one the churches that was used for fair measure...basically, if you feel the baker or seamstress had shorted you on your baguette or cloth, you could take it down to the fair measure stick and sort it out! Also of interest, O5, the Austrian resistance during World War II used the cathedral as a safe meeting place. Their mark still exists on the cathedral exterior! 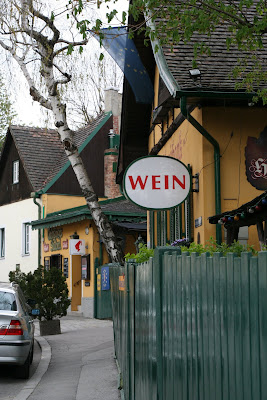 My favorite part of Vienna were the heurigen. On the outskirts of the city, and easily accessible by public transport, is the wine country and a variety of small, locally run wine houses known as heurigen. You can go and relax there over the really good and cheap wine in beautiful countryside settings, some of which even overlook the city! It's great because getting there is fun in itself, as it definitely requires some wandering to find the more inaccessible and less touristy places. Then you just relax and enjoy the food (they have all sorts of great meat, bread, and cheese platters and dishes) and wine in some charming courtyard or fruit orchard. 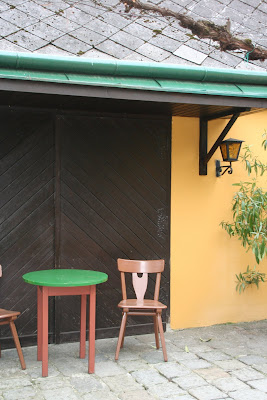