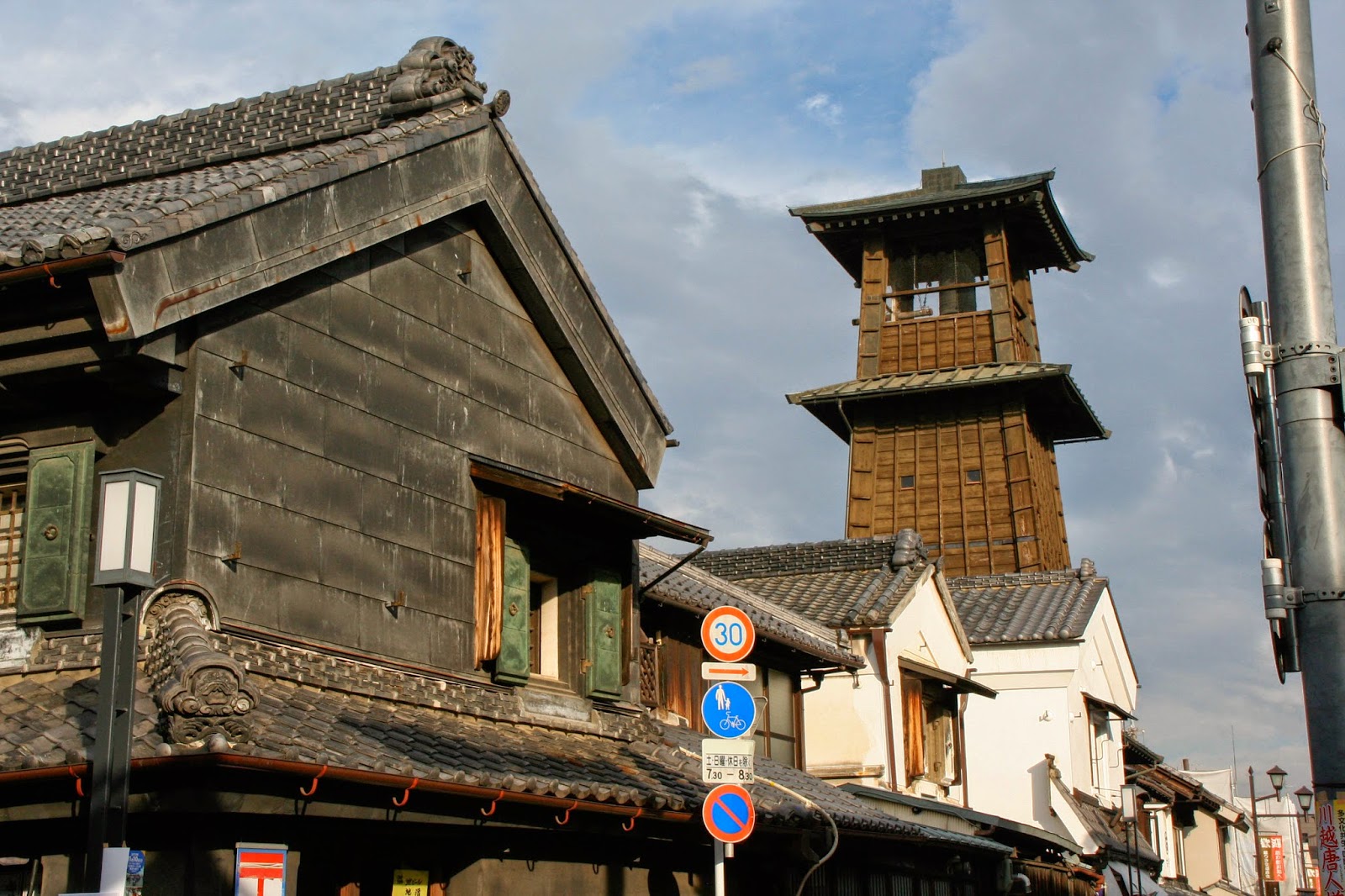 I had one spare day on my last trip to Tokyo, so I asked my good Japanese friend what he would recommend for a day trip in or around the city.  He suggested that I hop on a train and check out the historic city of Kawagoe. 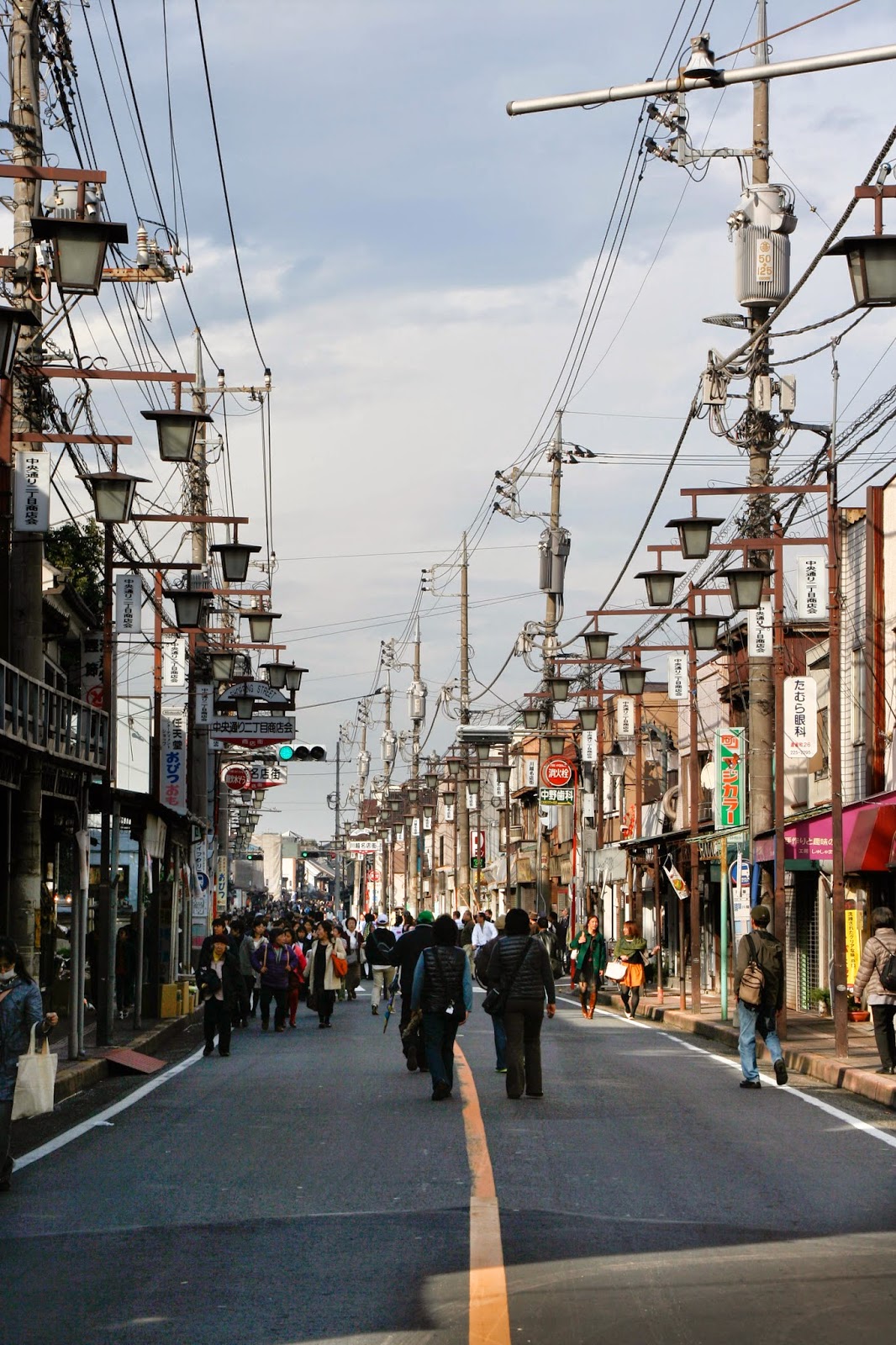 Kawagoe is pretty well part of the Tokyo metro area, though it does lie near the edge.  The train ride from Shibuya is relatively short (less than an hour) and affordable (less than US$10, 1-way).  When you depart the train station though, you don't really feel like you're any place special in particular... as the urban area that greets you is just more low-lying, dense Japanese city.  You may as well be in many of the other satellite cities that make up the Tokyo metropolis, though Kawagoe has a much more noticeably peaceful feel about it.  However, as you make your way towards the city center, you start to notice things aren't quite as dull as they seem. 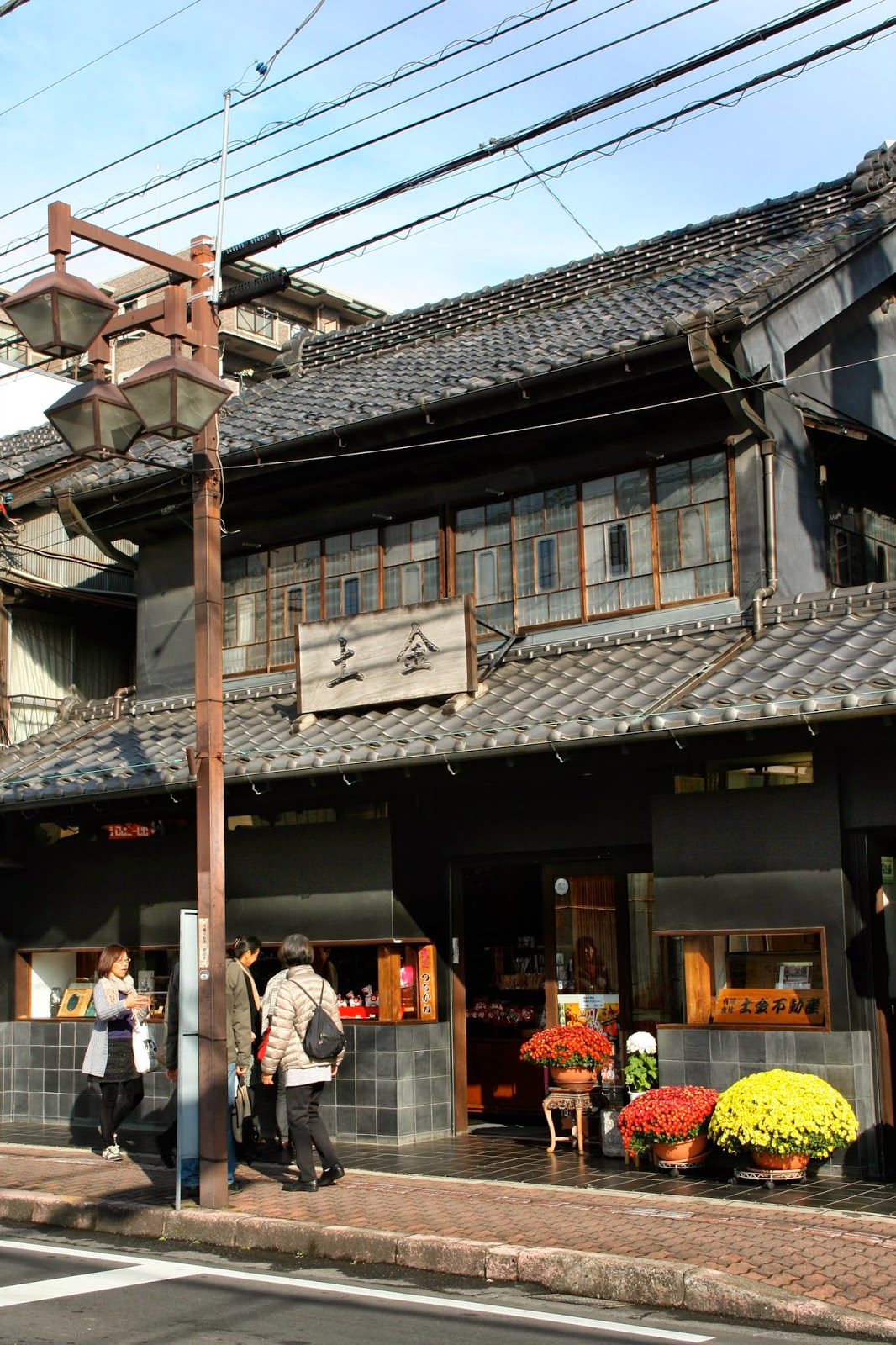 Wandering about with some sense of direction, you start to notice some beautiful old historic buildings, which is something that Tokyo and many other Japanese cities are lacking.  This apparent omission of architectural gems is due in part to the enormity of the destruction from World War II.  Fortunately, Kawagoe survived much of the bombing campaigns in the mid-1940s and now offers a rare opportunity to glimpse into the style of the old Edo era of the 1600-1800s. 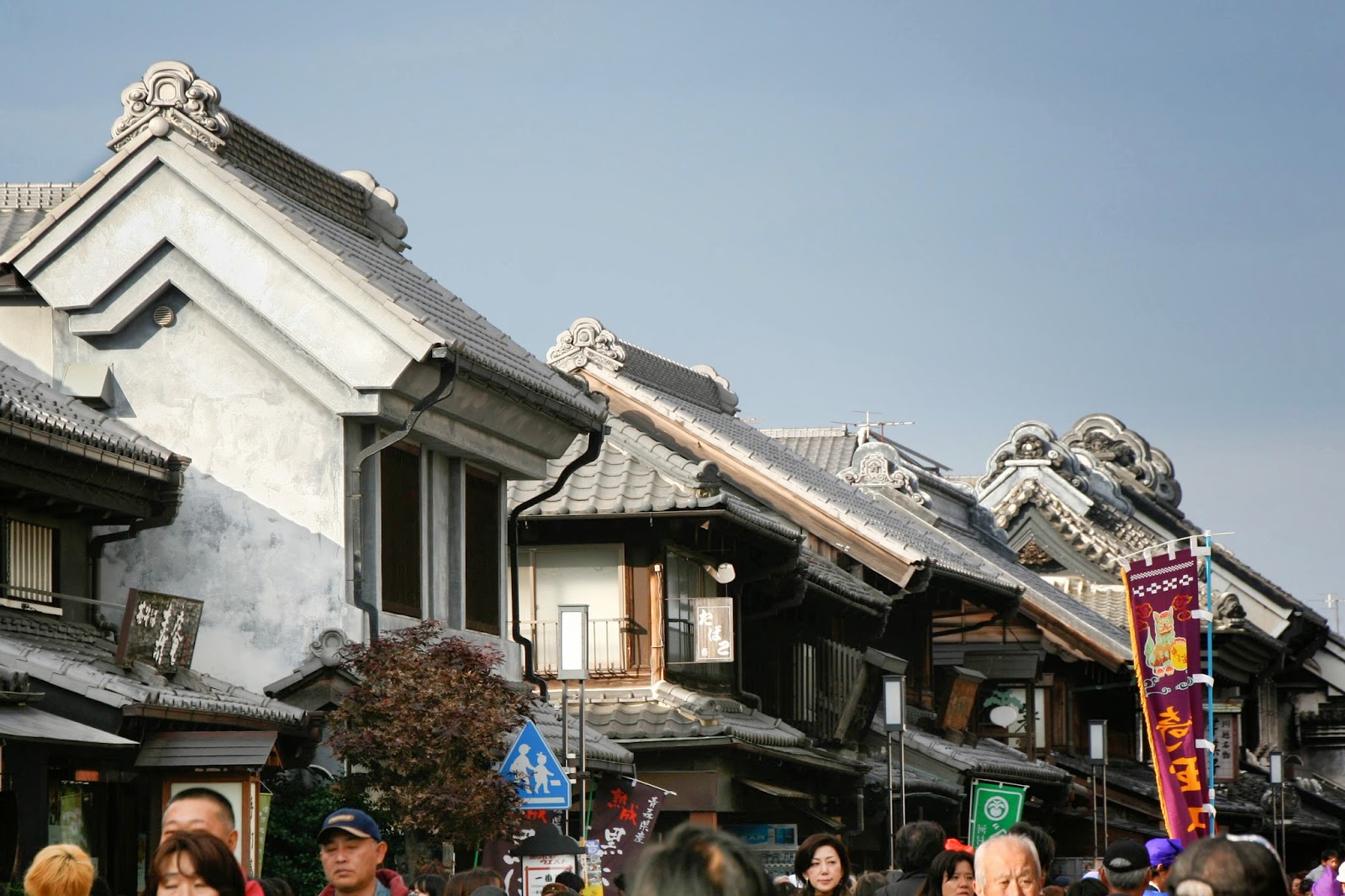 As you approach the historic center, you also start to notice how more and more of the historic buildings have a very heavy, almost fortified look to them.  This architecture is one of Kawagoe's main attractions, and those buildings look so strong for a very good reason... 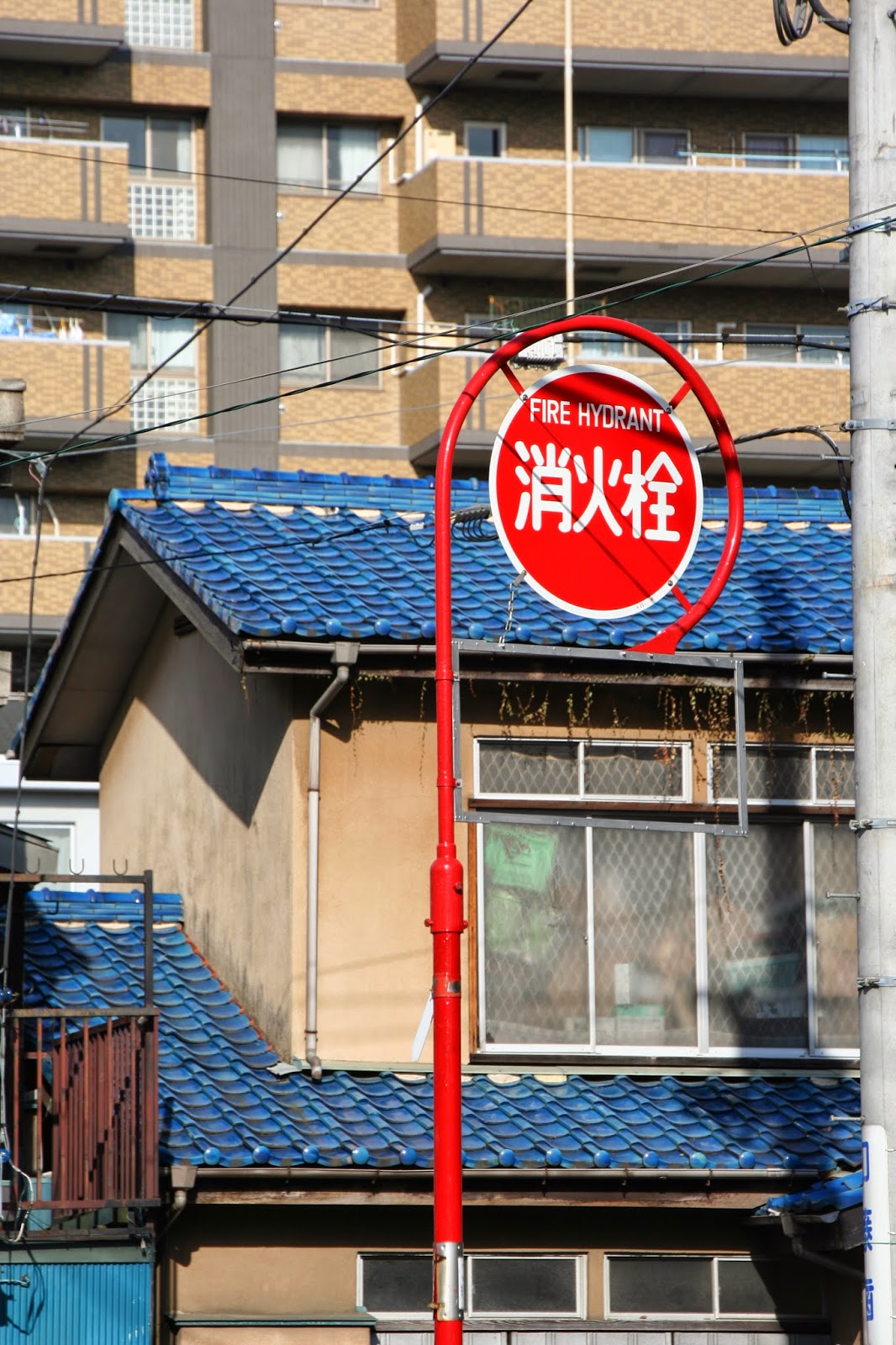 The other thing the observant traveller might notice around town are all these tall, red posts marking fire hydrants. 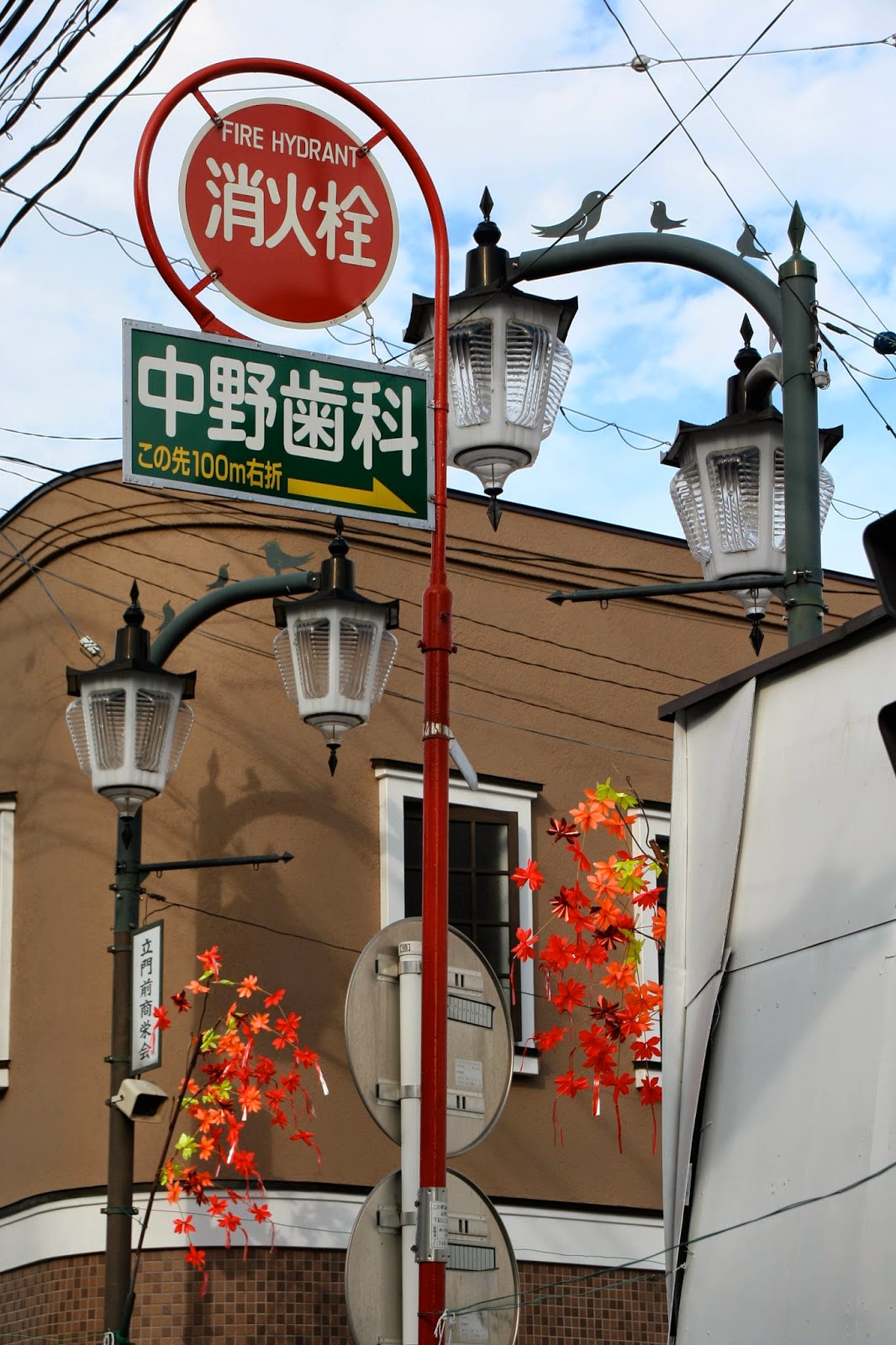 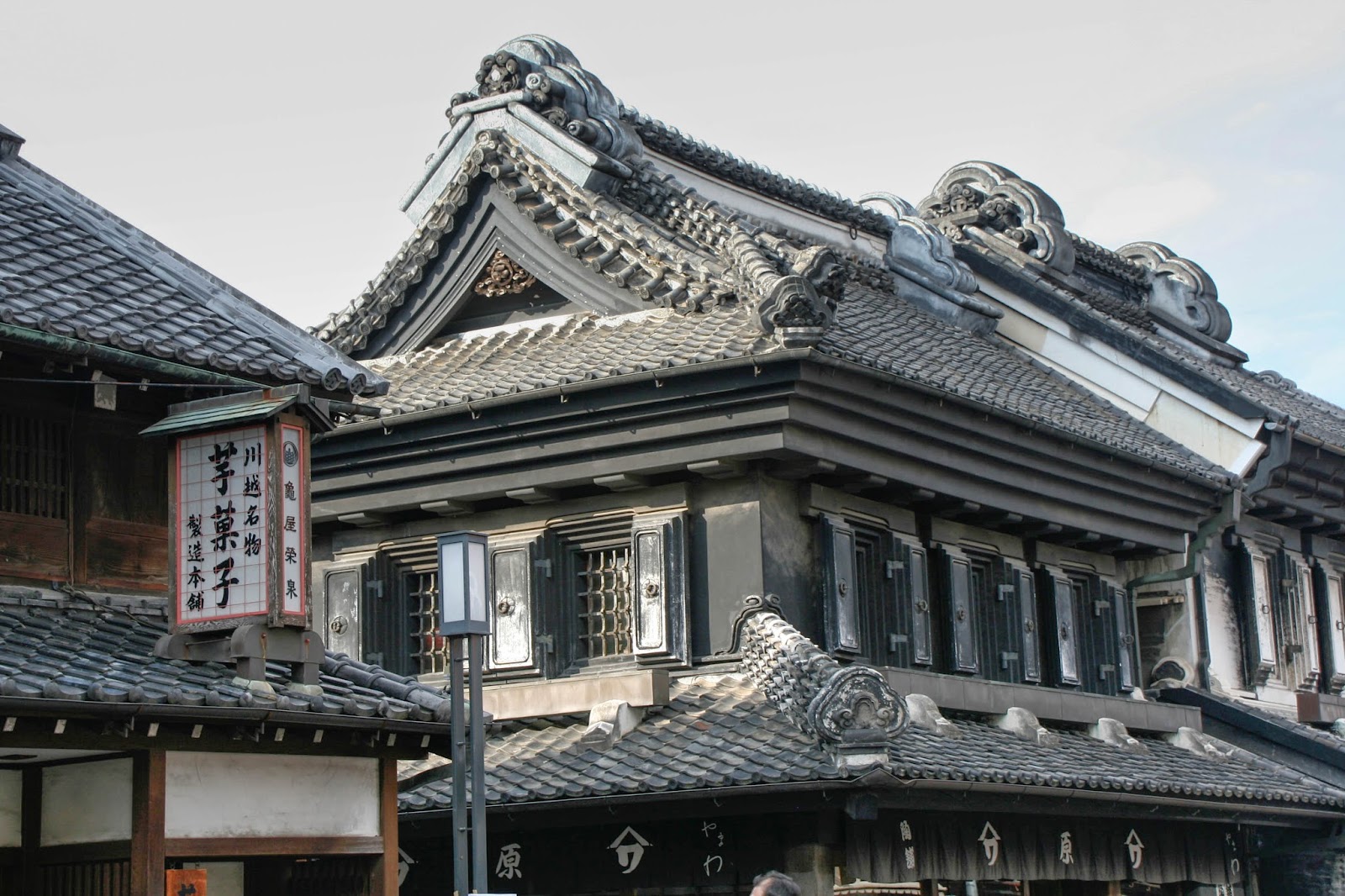 The beautiful old buildings in Old Kawagoe were constructed in the kurazukuri style.  This style was used for Edo-era warehouses and store-houses owned by the wealthy elite, rich merchants, and the ruling class. Old Japanese buildings were typically constructed of wood and paper, which made them ideal for dealing with earthquakes, but were not very effective if you wanted to protect anything you kept inside.  Moreover, wood and paper buildings are particularly hazardous during fires, especially given Japanese dense urban planning, and Kawagoe had a history of devastating city-wide infernos. 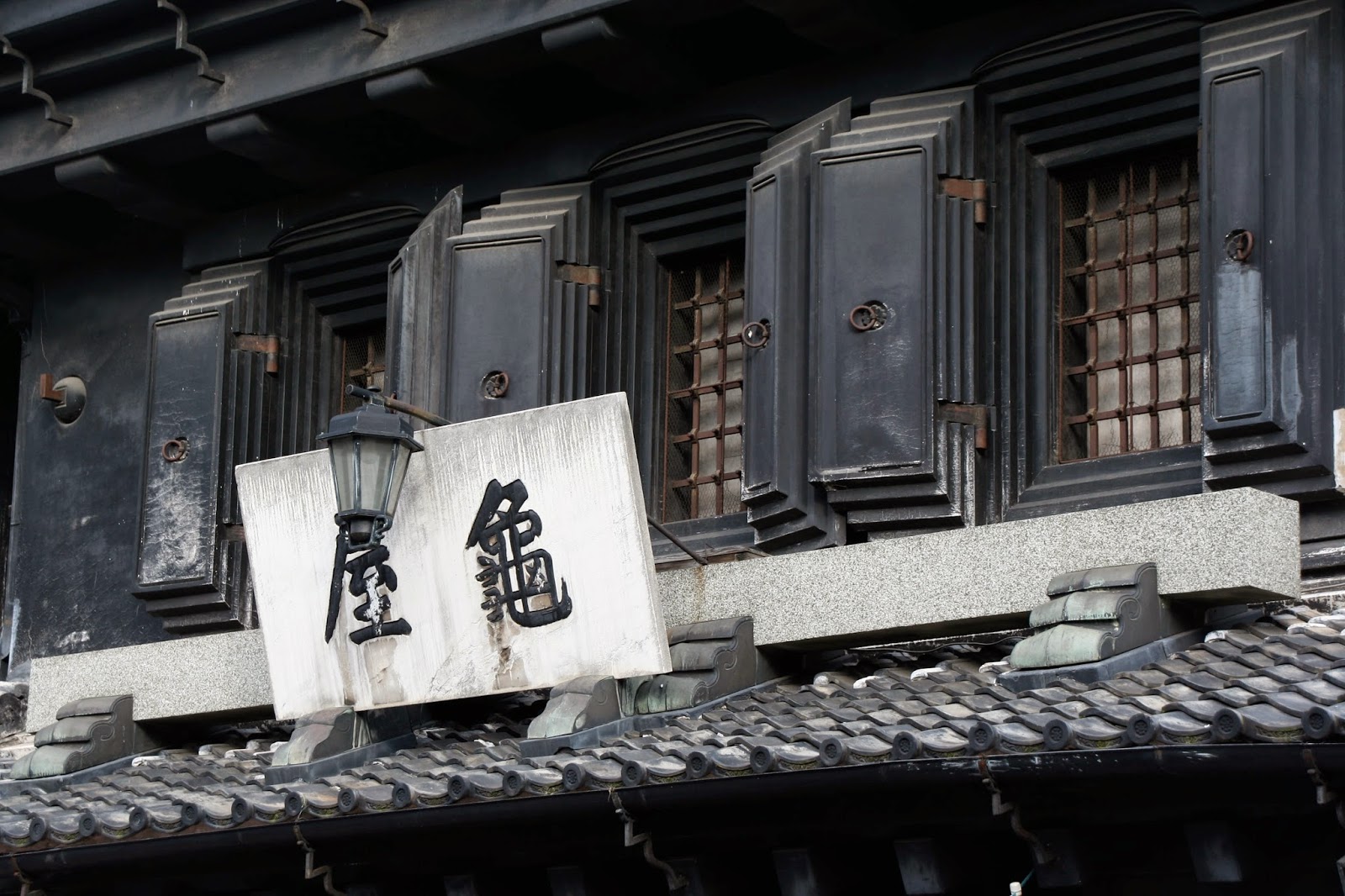 Kawagoe was a wealthy city, due primarily to its proximity to Tokyo and a convenient waterway that was used for commercial transportation.  Kawagoe's kurazukuri-style buildings were designed to be fire proof, with many insulating layers, including one of clay.  The thick, multi-layered walls also made the buildings strongholds that could be locked up to prevent thieves and raiders from stealing the good within. 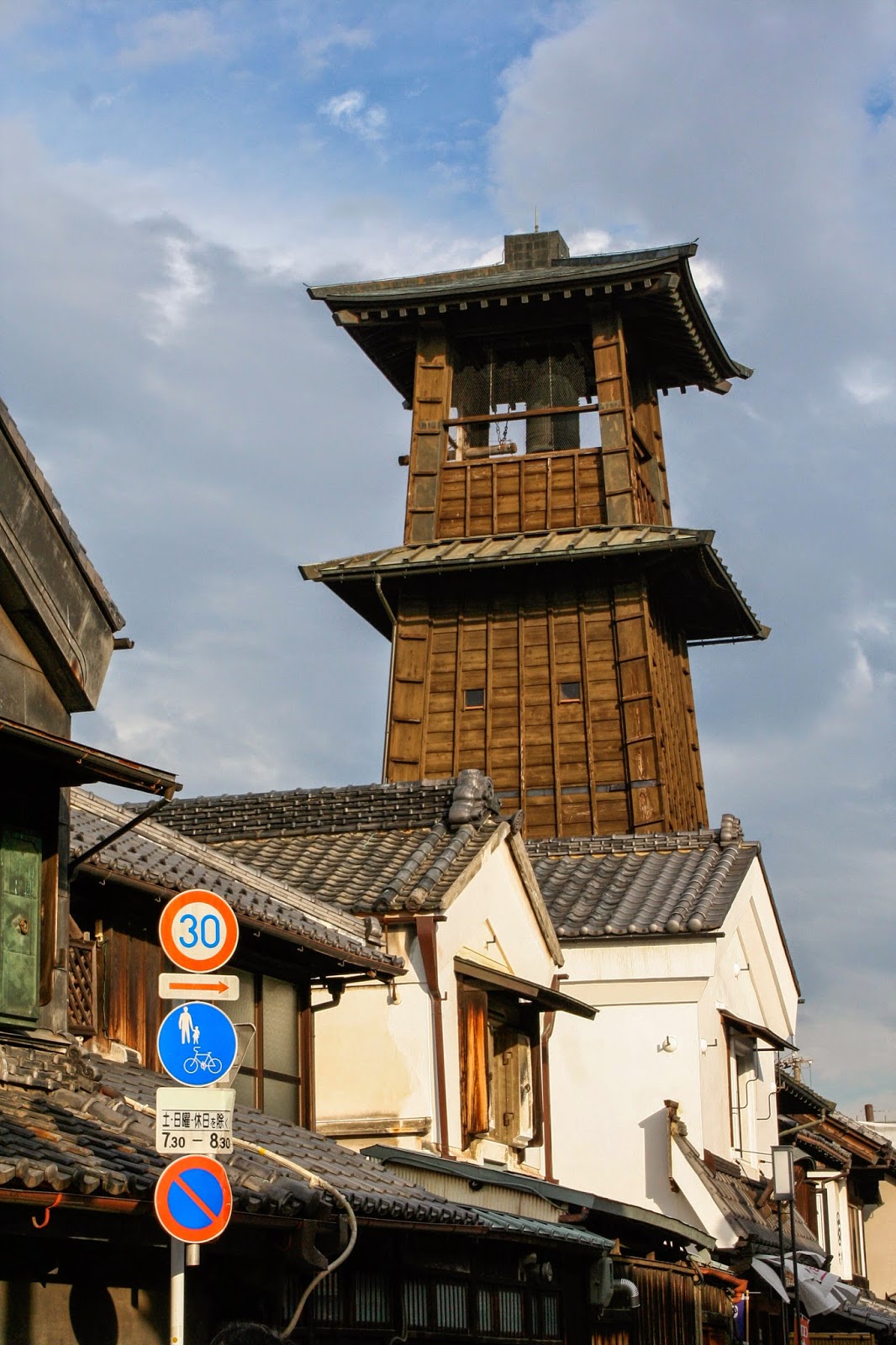 One of the city's most noticeable building houses the Toki No Kane, the Bell of Time.  This old bell tower has marked the time throughout the day since the 17th century, and also served as a fire lookout and warning tower for the city.  The modern version is a replica of the original. 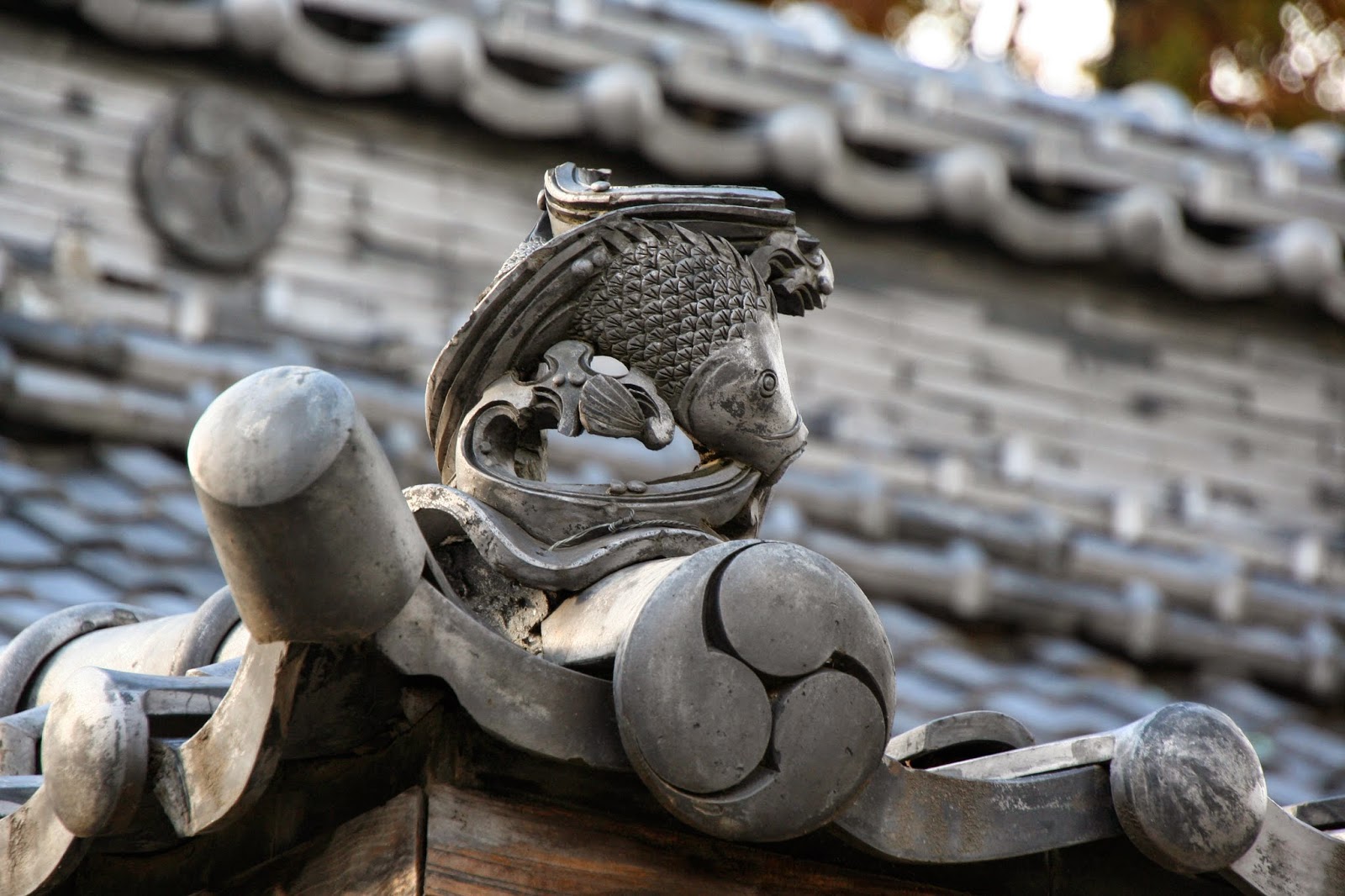 Despite the heavy fortifications, Kawagoe's architects still paid attention to minute yet intricate details and touches of style and beauty.  I was in awe of the detail on this fish sculpture that graced the tiled roofs of one of the old buildings. 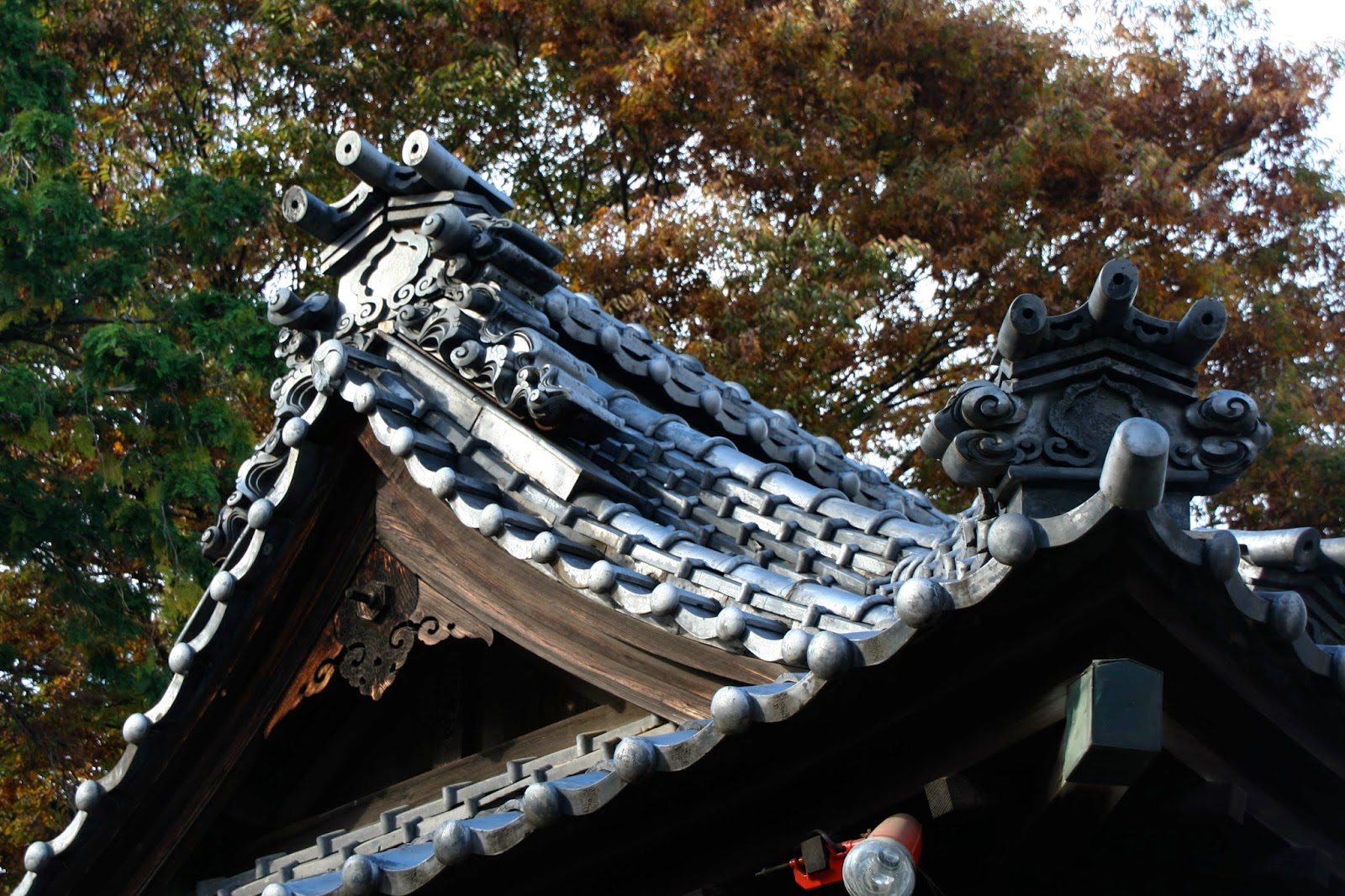 The tiled roofs themselves were also something to behold and appreciate... 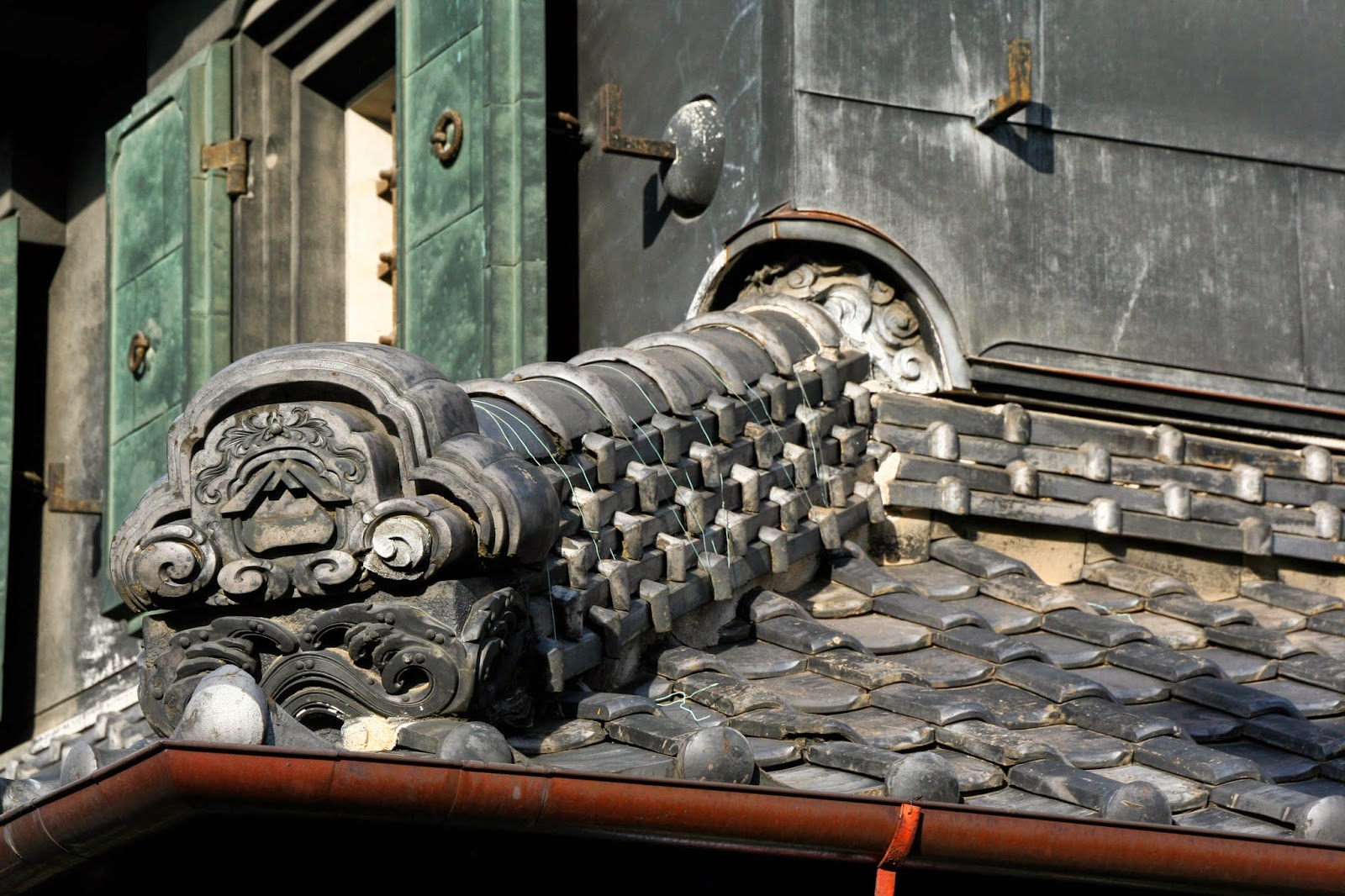 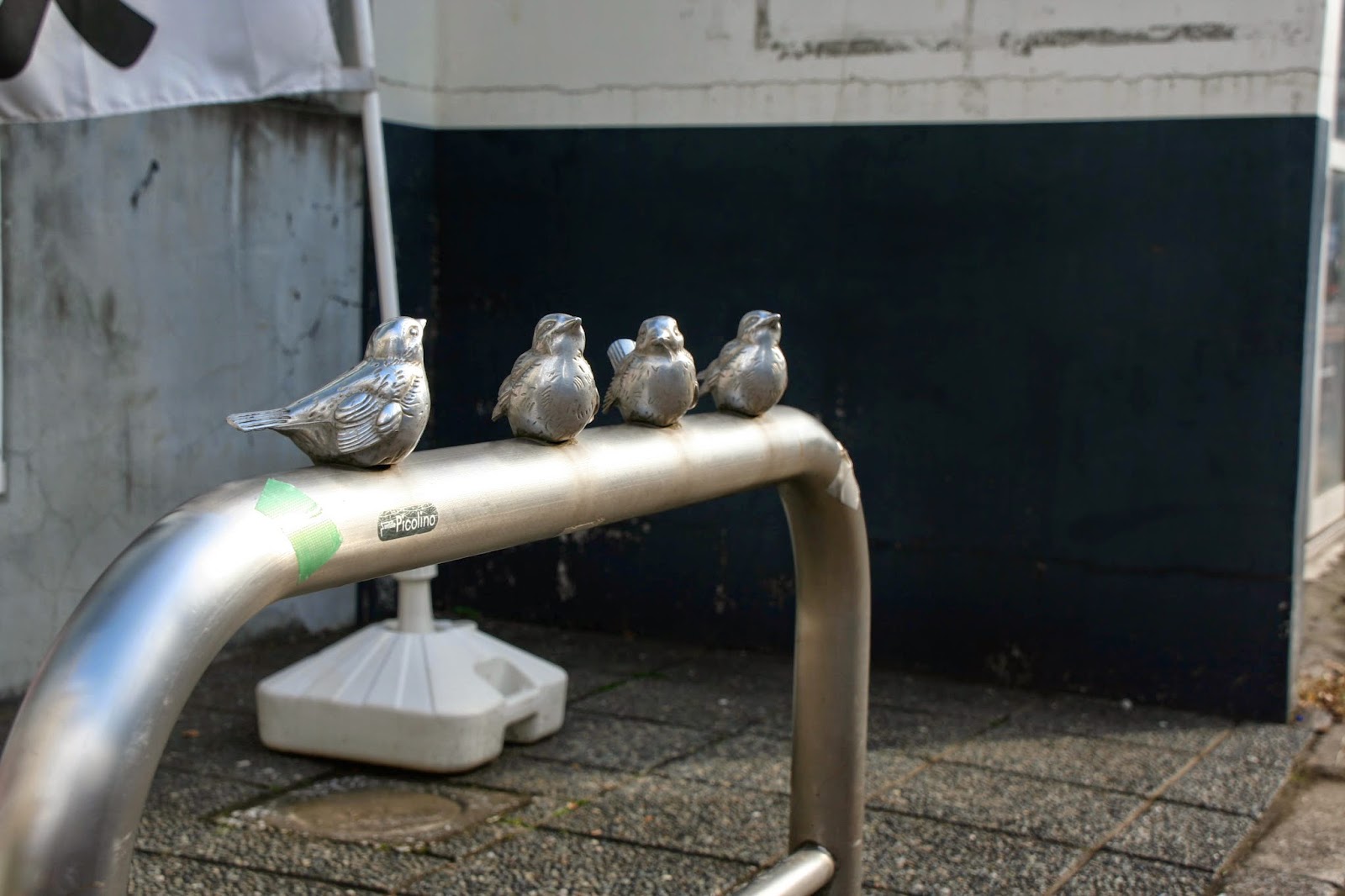 Quite refreshingly, those touches of finer detailed are still applied with modern installations too... like these metal song birds on the top of this bike rack.  Why can't more places go this short but ever-important and -appreciated extra mile too? 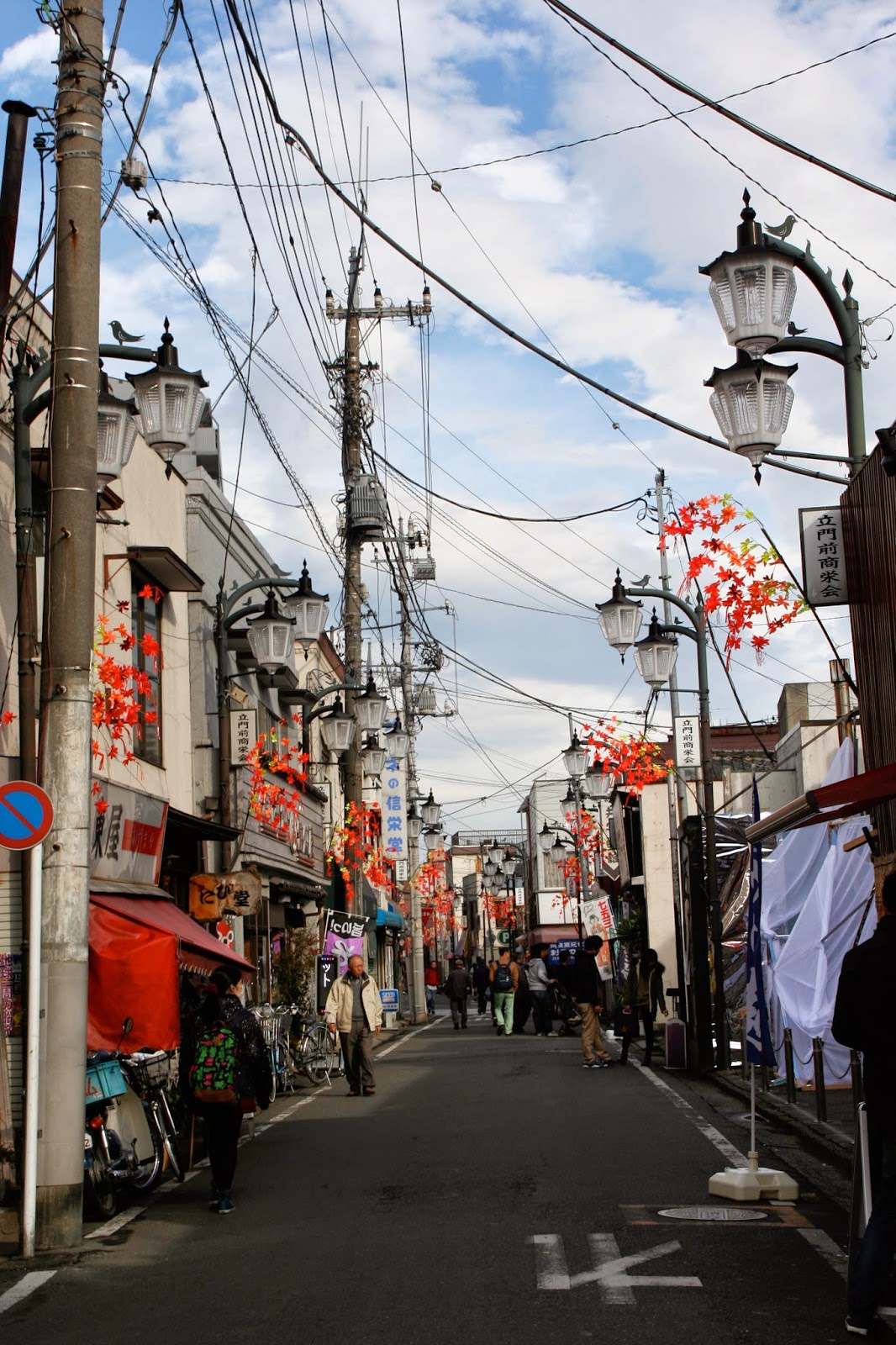 To mark the season (and possibly make up for the general lack of trees around town), the city had also hung these golden-red leaves from lamp posts throughout the center.  The splash of color was a relief from the drab grays used on the buildings and the rats nest of power and telecom lines strung above the streets. 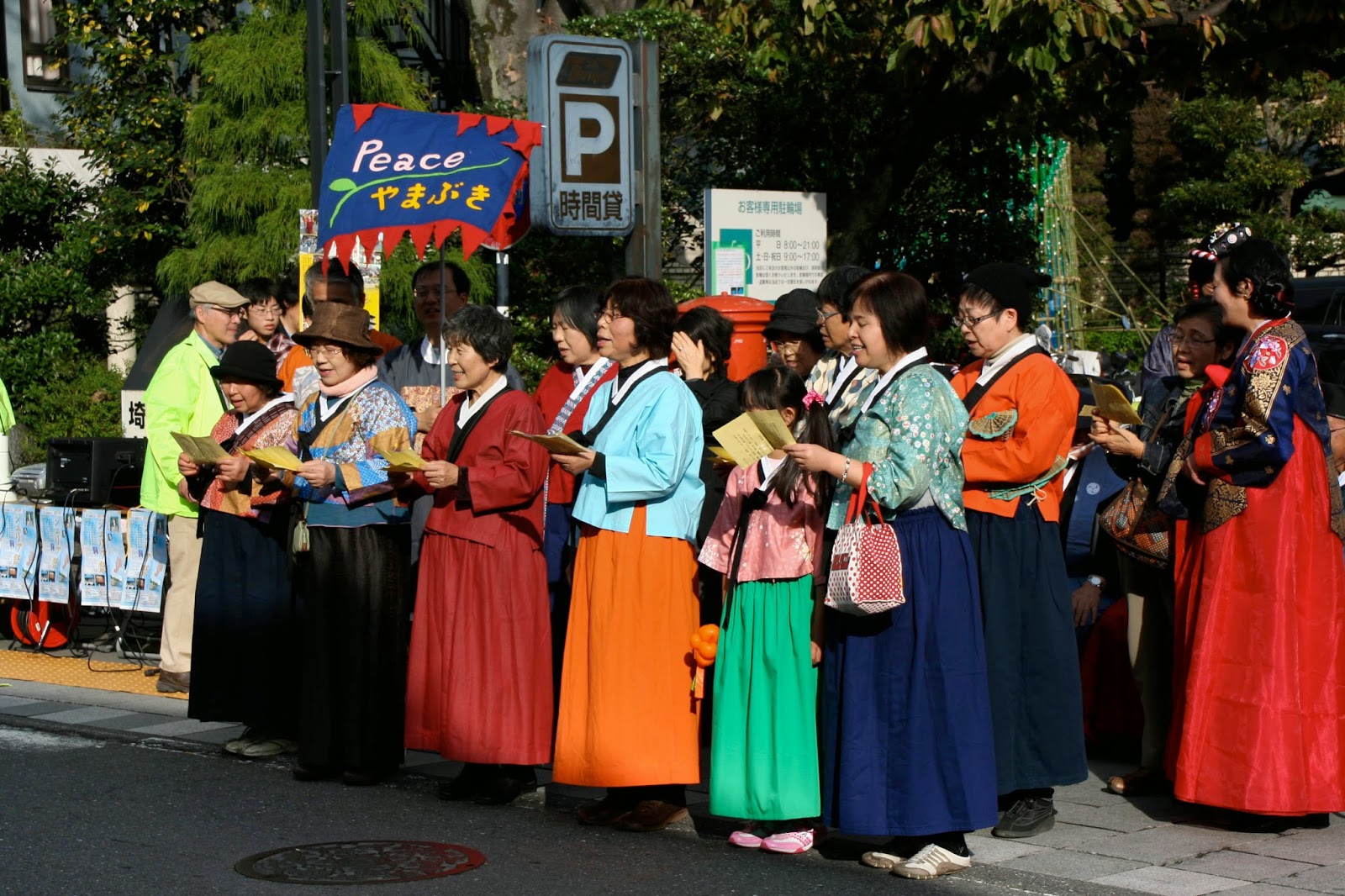 I lucked out and ended up in Kawagoe during some kind of peace festival.  The city's main street was closed to car traffic, there were people dressed in traditional garb from not only Japan but all over the world, and there were lots and lots of people taking in the city's sights.  These colorfully clad ladies were singing in a choir out on the street. 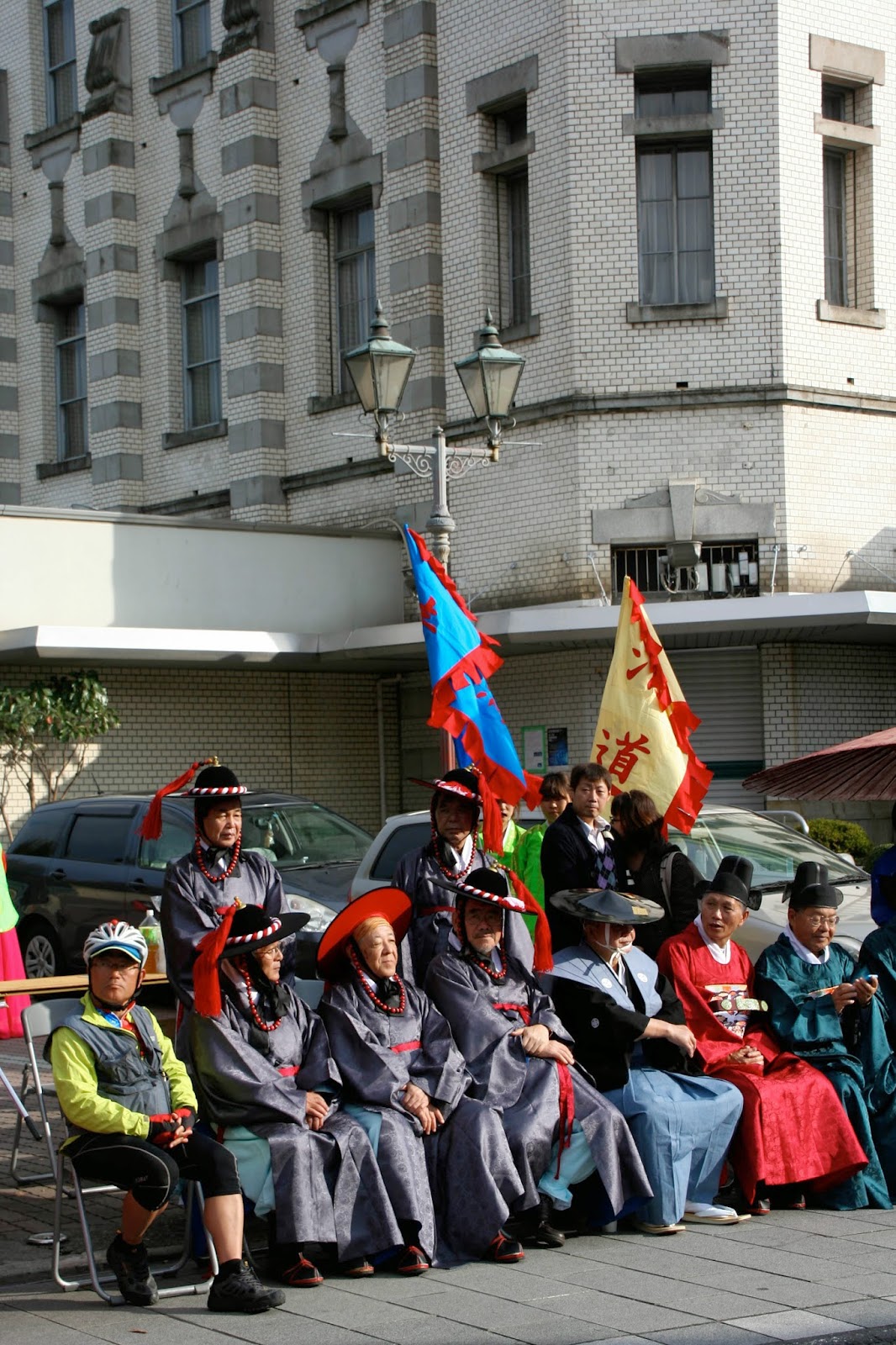 And these old guys were sitting nearby looking on at the choir and the passersby.  I loved this because it is so "one of these things is not like the other."  I guess the guy that rode his bike over forgot to pack his big-boss outfit and tasseled hat. 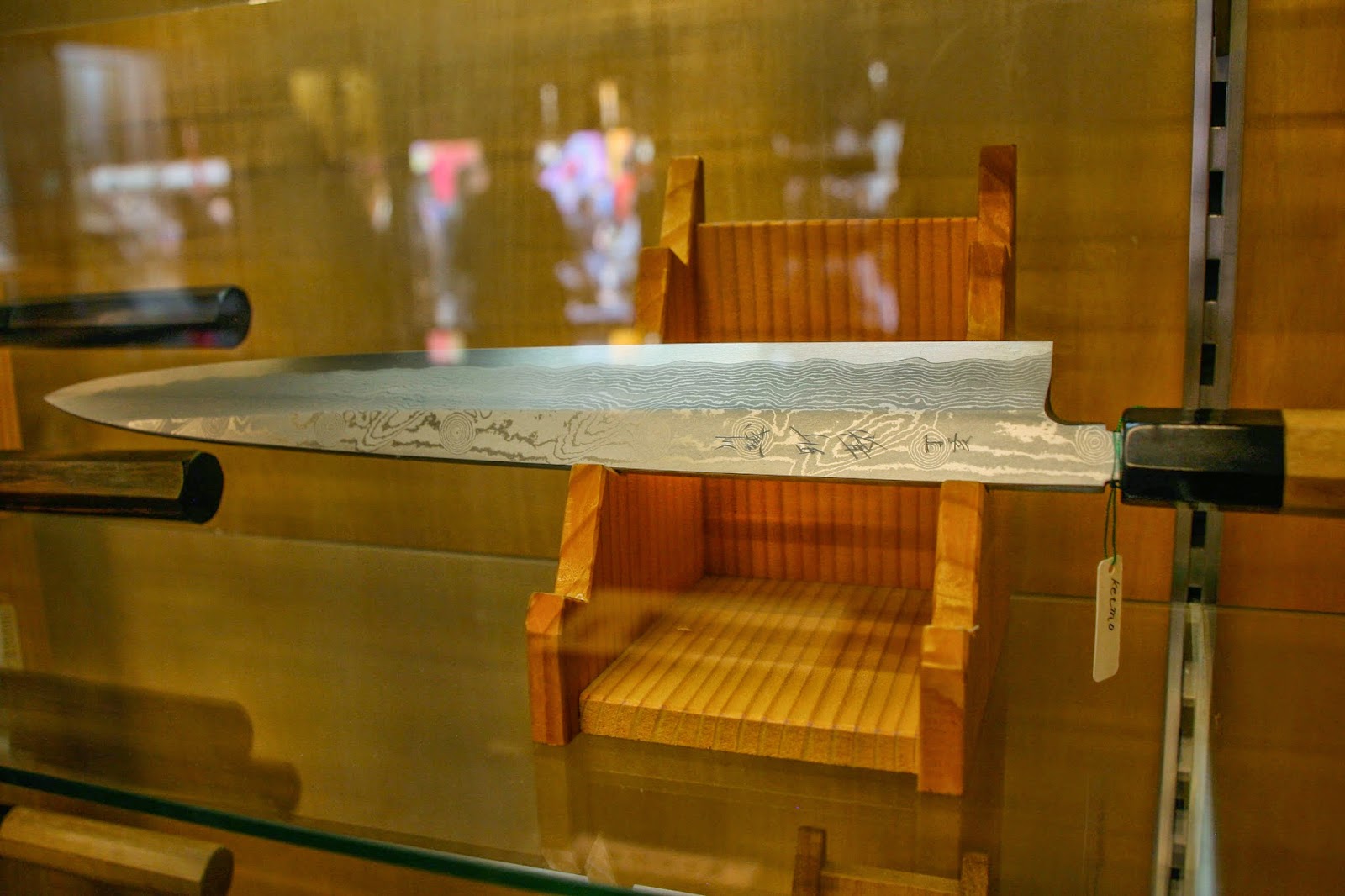 There are some really great shops and restaurants along the main street through the historic center.  The place carried a large collection of beautiful swords and knives, and the blacksmiths and their shop were right on site too!  Japanese knives are famous for their quality, and this place seemed to be the cream of the crop.  Kawagoe's center is also home to some great restaurants, including many that specialize in barbecued fresh-water eel... probably my favorite ingredient in Japanese cuisine. 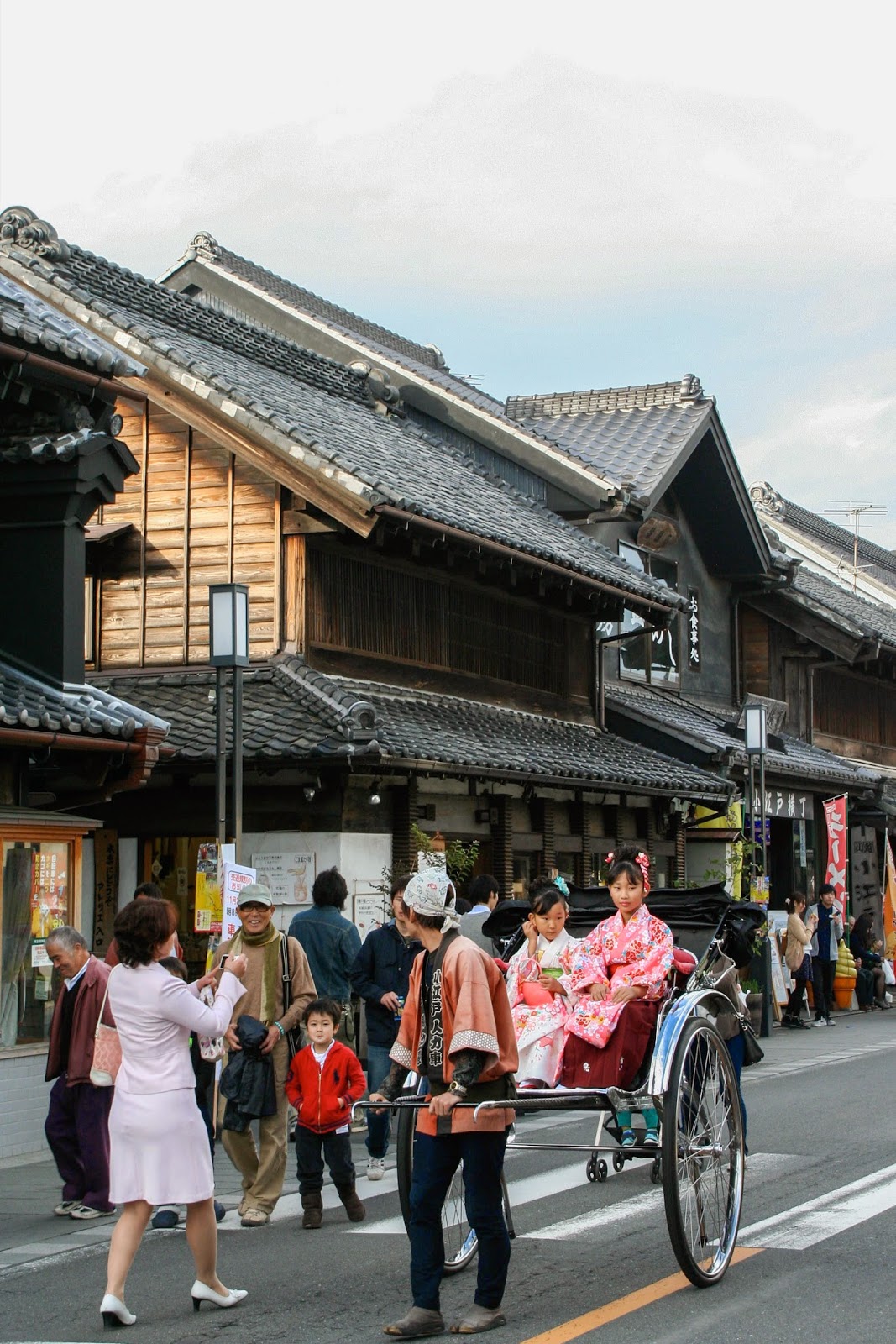 I just loved this picture... in particular how all three children stand out so much in it. 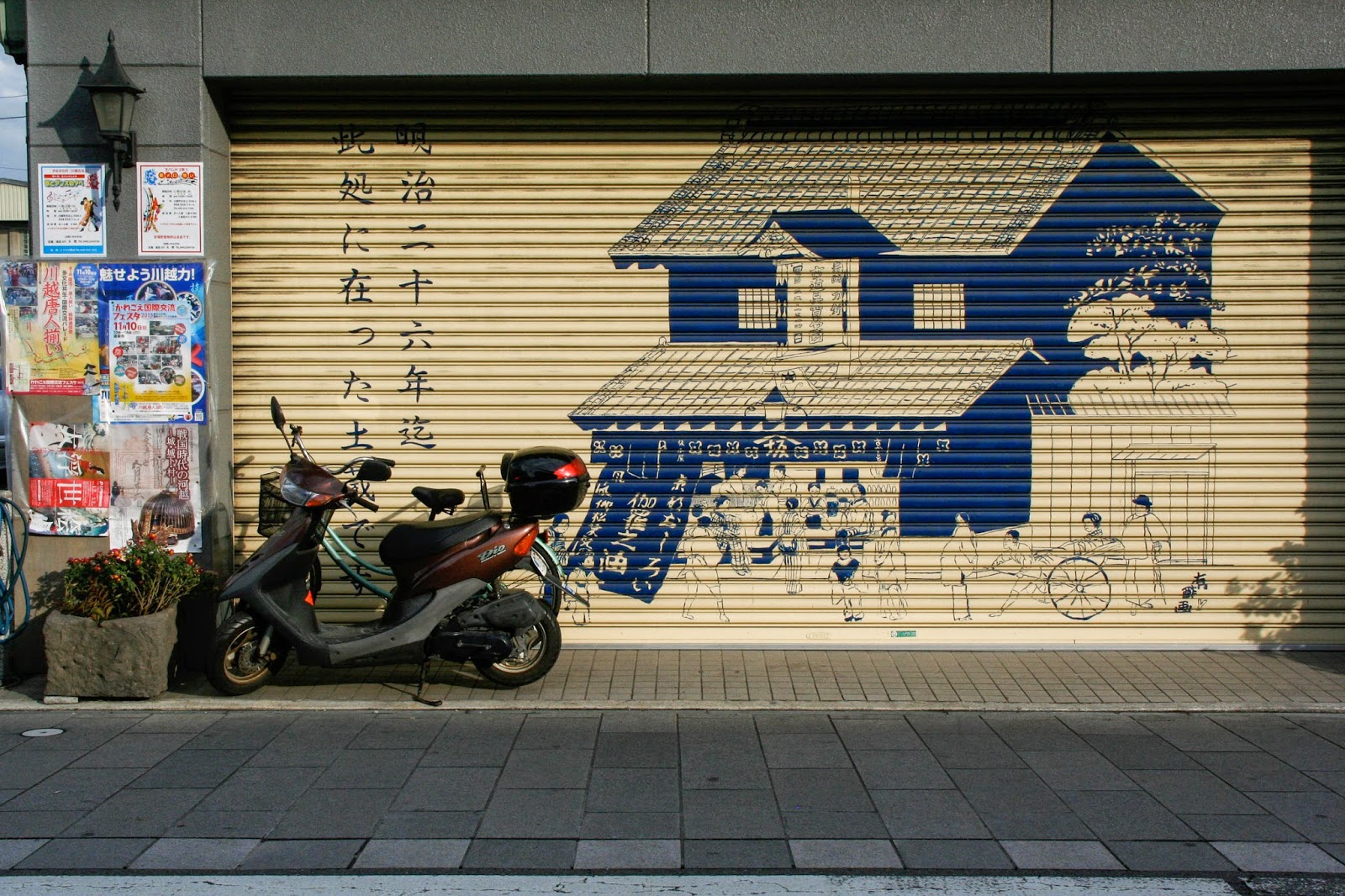 Like in Tokyo, the security gates on the outside of shops were also beautifully decorated. 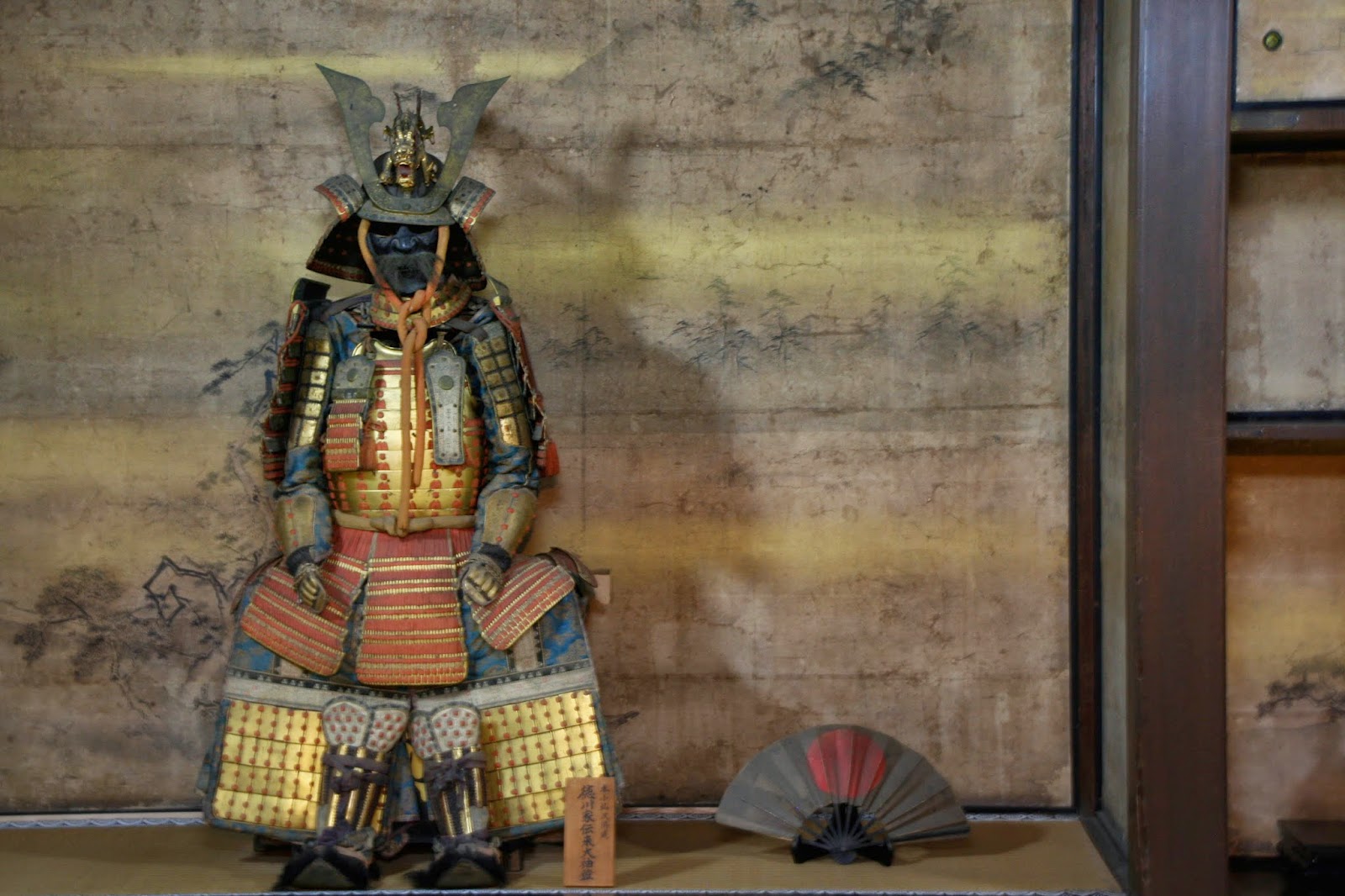 My last stop in Kawagoe was the Semba Toshogu Shrine and Kita-in Temple complex, southeast of the center.  The temple now contains the only remaining buildings from Edo Castle in Tokyo... they were moved there from Tokyo in the 1600s to replace some of those lost to a fire.  You can wander through the temple, which is very simply decorated and has the wood frames, bamboo mats, and paper walls that many think of when they think of Japanese buildings.  There were also some museum pieces inside, like the samurai armor seen above.  The nearby Toshogu Shrine is one of the holiest in Japan... it is definitely worth checking out for its statues and classic architecture.

Overall, Kawagoe was a great way to spend a day away from the adrenaline fueled madness of Tokyo.
Posted by Drew at 10:18 PM No comments: