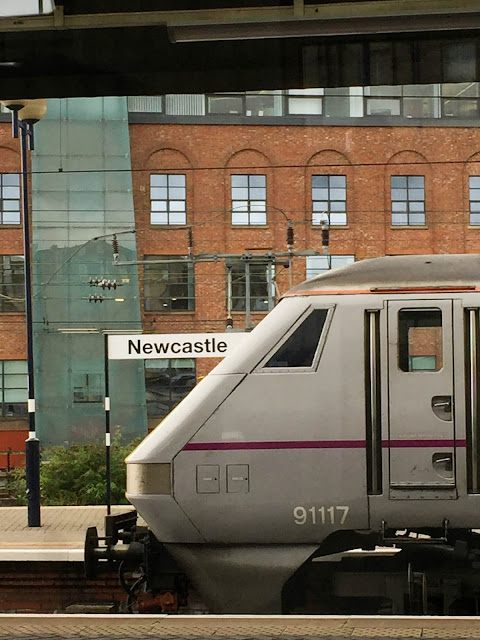 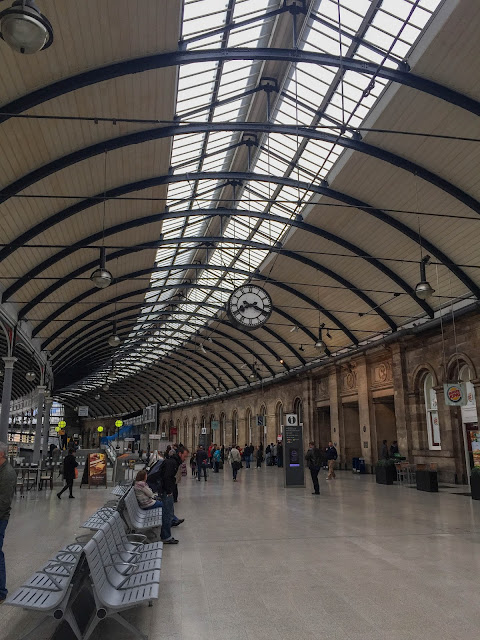 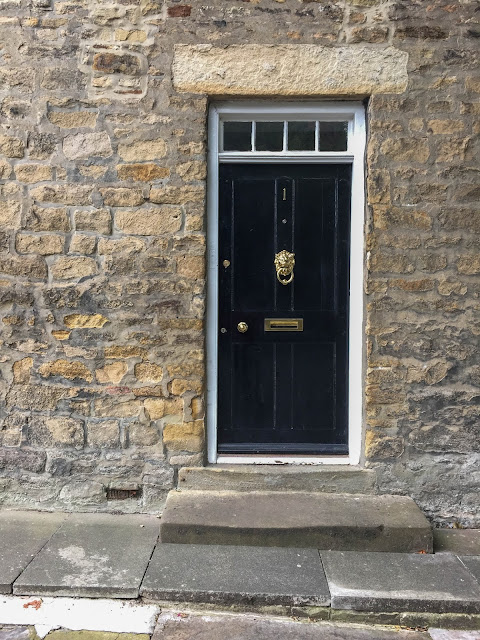 Newcastle, also known as, the limestone city.  There is a lot of limestone.  It's charming actually. 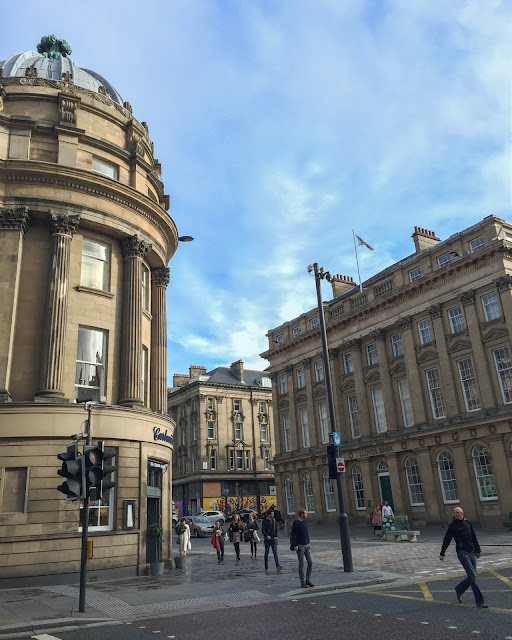 Like I said, charming.  But, very much in the same way as so many places in America, the city exudes power and money. 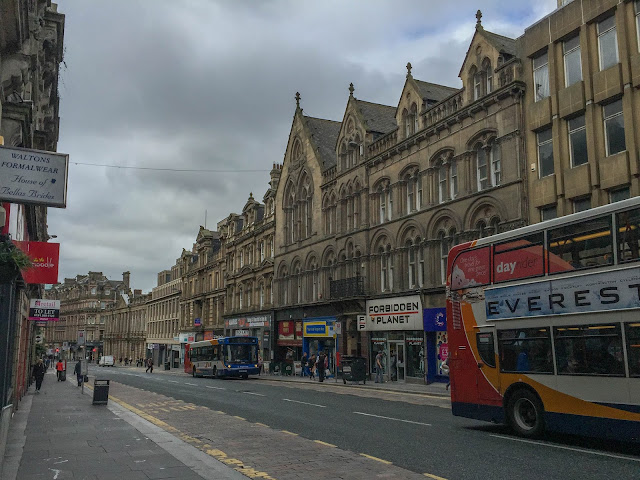 But still charming in that gloomy, far-Northern-European kind of way. 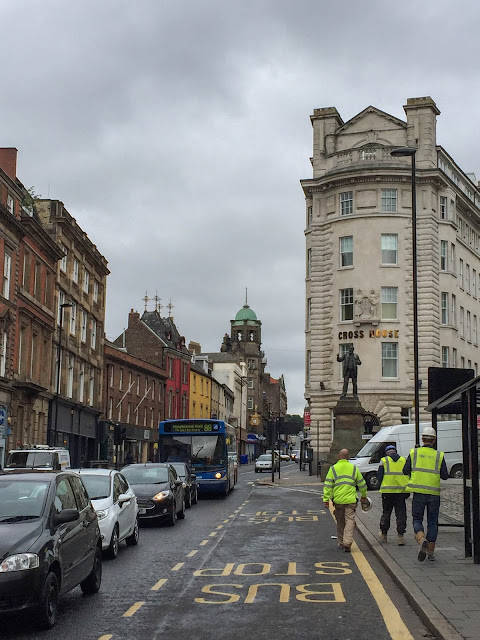 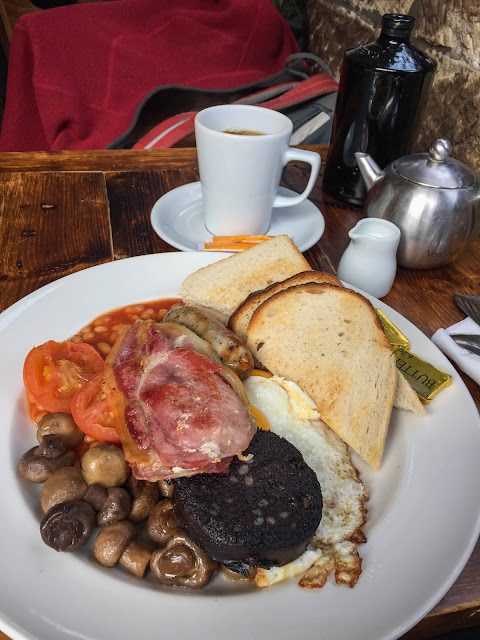 A proper Full English Breakfast.  One of my favorite things in the world. This deserves some discussion. First off, black pudding.  Yes, please. Blood sausage and savory herbs and spices?  There is everything delicious about that and only something wrong if you disagree with the predatory nature of our species (*the philosophy behind which I really do respect). Let's go on. Mushrooms and tomatoes fried up in butter. Delicious, and only wrong if you're a vegan.  Baked beans.  From a can, but so great with that useless toast, its butter, and dried ham.  Properly fried egg: the yolk is the milk of the gods to blend with the rest, and the whites are just extra (salted and fatted) protein fodder for your soul.  Add to it all, a fresh cup of tea and milk. One of the world's great breakfasts, by any account other than anyone vegetarian. 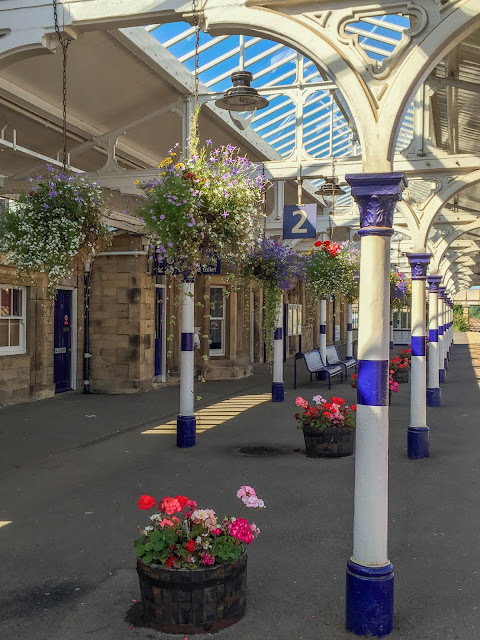 Hexham. The train station is ever-more charming. Those flowers were truly a treat, especially in the cool, crisp air of mid-September. 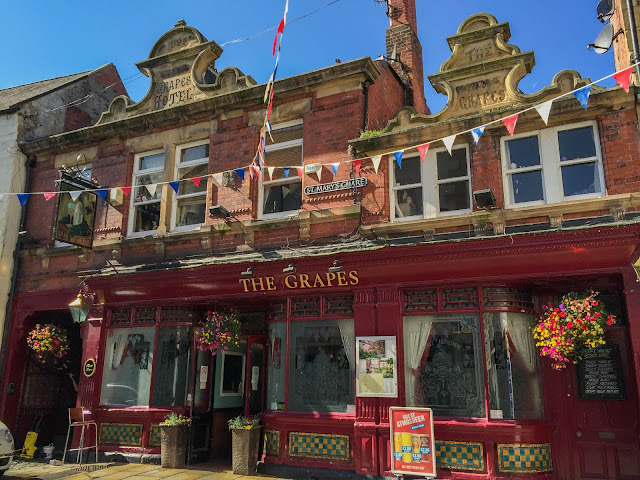 The folks here, in Hexham, were fantastic and so incredibly friendly and warm.  My traveling companion and I serendipitously came upon a birthday party of a pair of local twin gentlemen. Each year, they throw a "fancy dress" party, which in American English translates to "costume party".  It was awesome. How often have you had the chance to drink with an ATAT and an X-wing, or Alice, Tweedle-Dee and -Dum, the Cheshire Cat, and Queen of Hearts, or SpongeBob SquarePants and the bikini-clad girls from Baywatch? I liked Hexham. 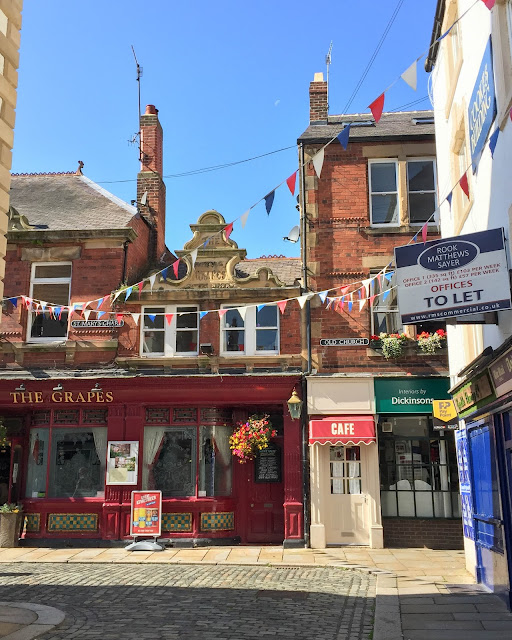 The town is a charming place in what I know of as middle England. People clearly just want a nice life there.  There is nothing wrong with that, and just about everything right. 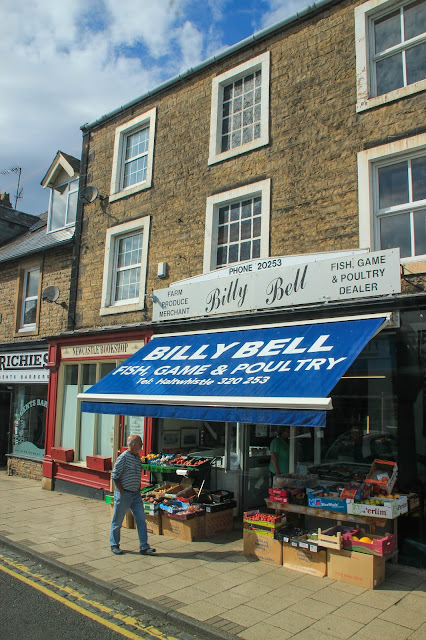 I would have loved to have shopped for food here. Time permitting... it didn't happen.  Though I did have one of the best game dinners I've ever eaten at a small inn along The Wall.  More on that in the next post. 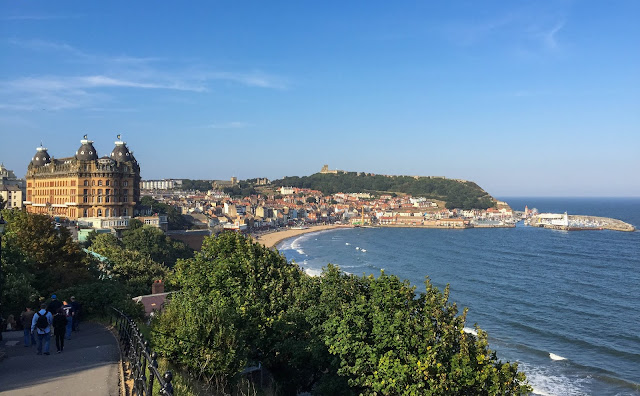 Scarborough... the train station obviously wasn't as charming there.  But, look at that set coming in... 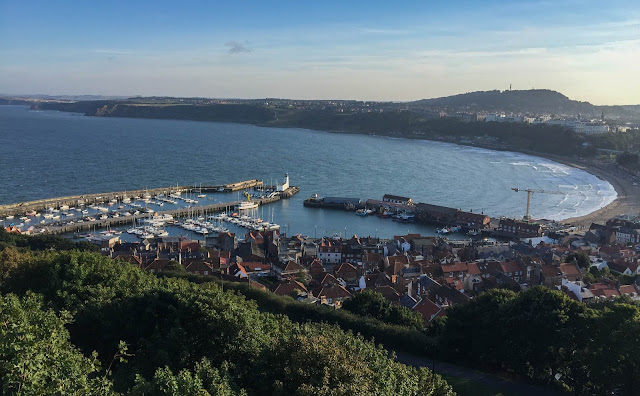 Scarborough is famous for its fair, and now, for its surf and beautiful coastline.

The town is somewhat small, and the old harbor has been well preserved. 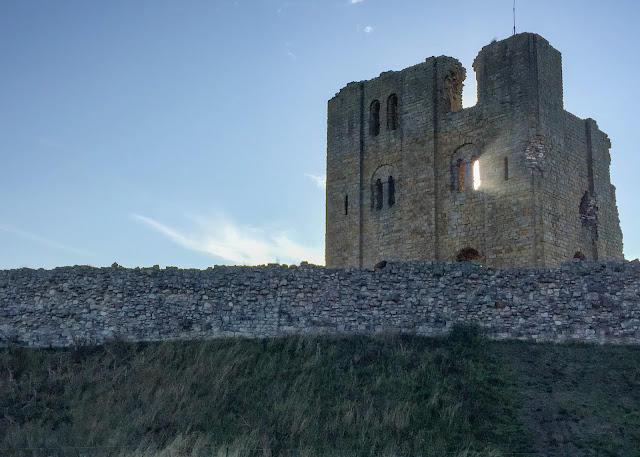 The even-older castle is still there too. 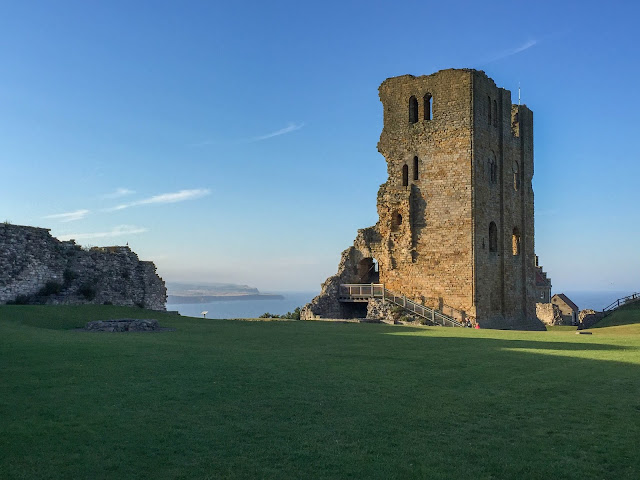 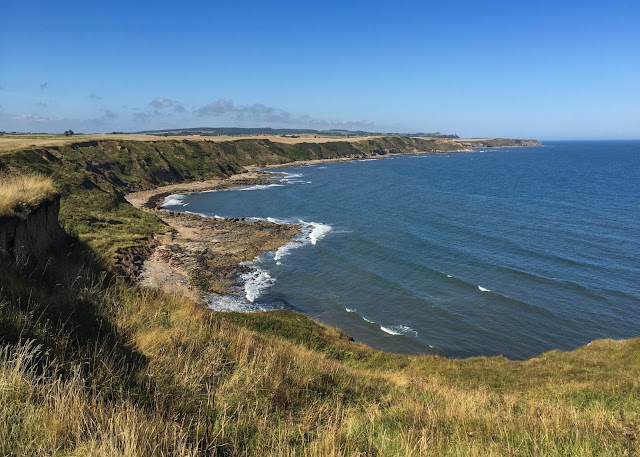 I mentioned that coastline... there are walking trails all along it.  I don't know if we can thank wealthy landowners for that, but if we can, thank you. If this was America, these cliffs would be full of McMansions by now. Forget that; places as beautiful as this should be preserved and accessible to all that will go and respect them. 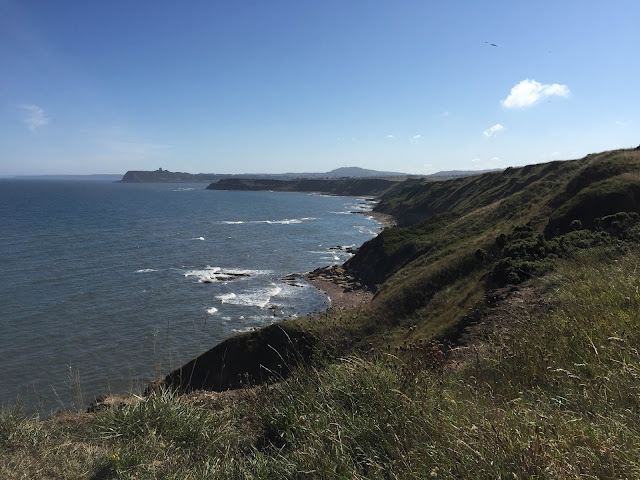 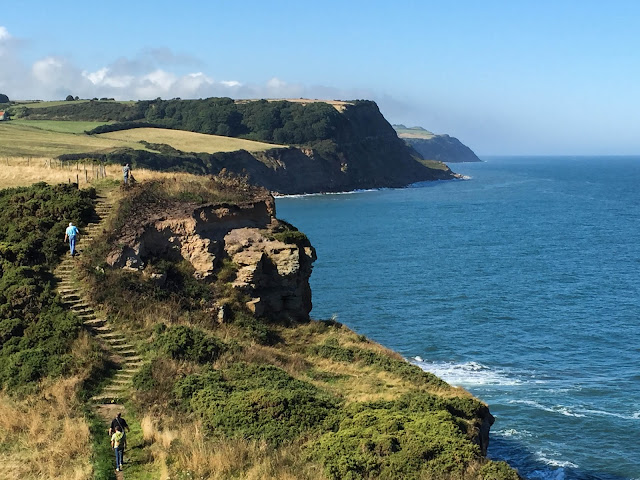 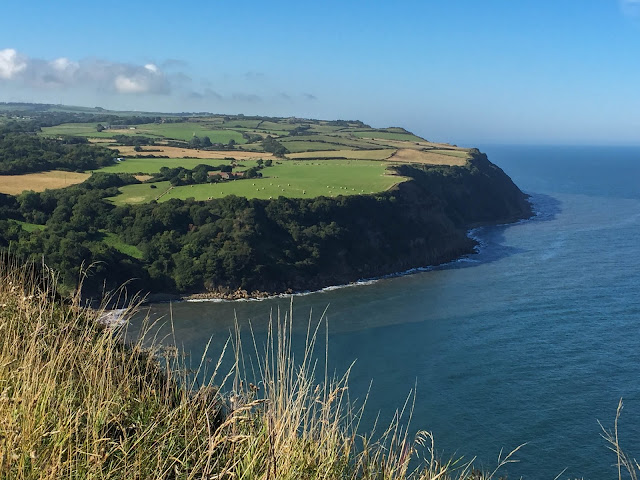 I'm not kidding.  You can walk for miles along these trails.  Even better, you can walk to an old, old country inn with fantastic ales and food. England has fairy-tale land in its own way. 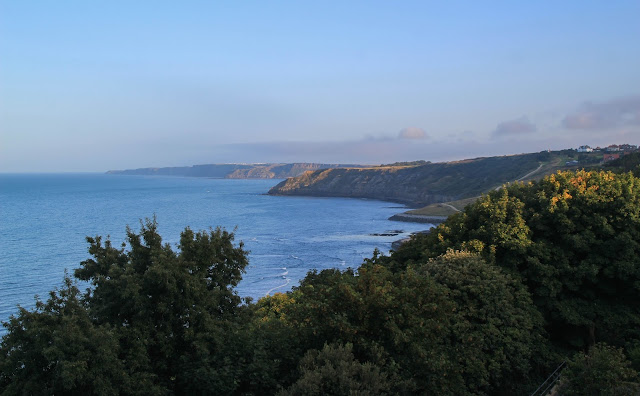 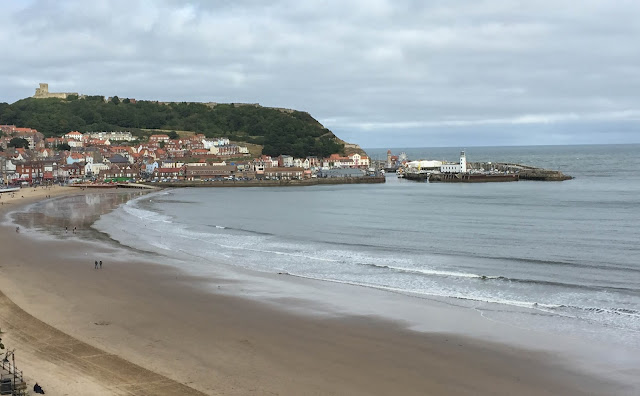 Surf.  I have now surfed the North Sea.  It's bitterly cold, even in September, but it's quite good surf when the conditions are right.  The swell when I came in was peaking at over 12 feet. Not bad.  The beautiful, long bay and beach along the south side of Scarborough provide a perfect break for longboarders. Just make sure you pack (or rent) a thick wetsuit.

If you're an active surf-traveler and find yourself along the North Sea English Coast, head to the nearest shop and just be friendly and chat... there are many, many good breaks of all types along the complex coastline 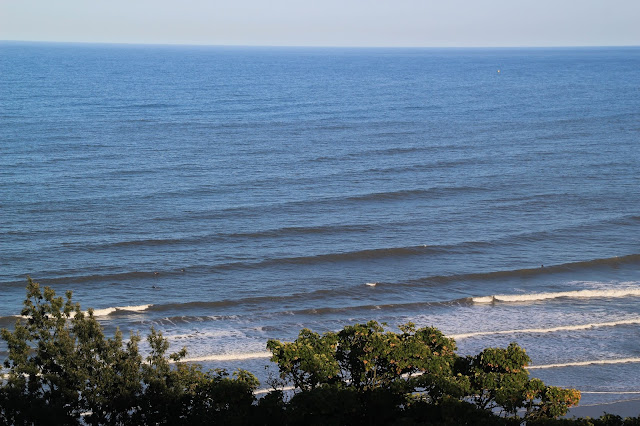 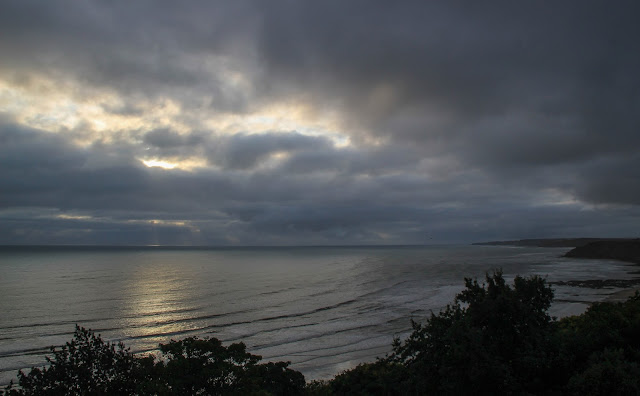 England. You are still naturally stunning in places, despite your human inhabitants having completely altered your facade.
Posted by Drew at 1:26 AM