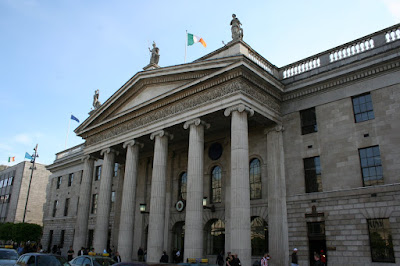 The Dublin Post Office. This was one of the first landmarks we saw when we got off of the airport bus on O'Connell St., but Missy and I had very little idea how important it was to Irish history at the time. 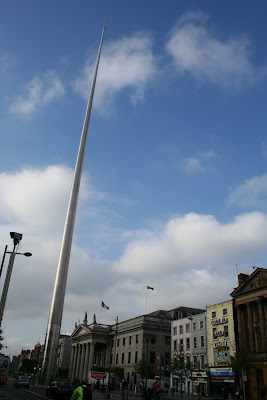 The Spike and the Post Office...the Spike being the other major landmark along O'Connell St. that we first noticed when getting to the city center. 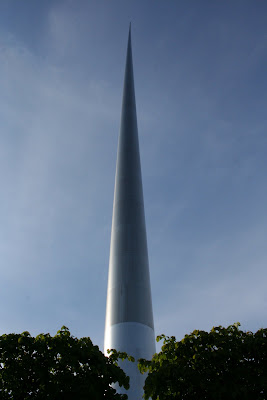 The Dublin Spire, aka: the Spike or the "Stiffy by the Liffey", was the winner of an architectural competition to replace the old Nelson's Column, which was mysteriously blown up in the middle of a 1966 night. The original column was erected in 1808, but apparently someone in Dublin wasn't too happy about its English origin or meaning. In true form of all things phallic, this newer structure was taller than the original and was proudly erected between 2002 and 2003; this new spire, at 120 m, would tower over the old column, which measured up at a mere 41 m. 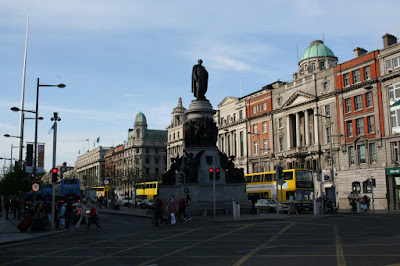 The South end of O'Connell St. and Daniel O'Connell's statue. O'Connell St. is the main street of the North-side of Dublin, and it is one of the widest streets in Europe. Looking at the street today, it is very difficult to picture what the street looked like after the 1916 Easter Rising, when the British used heavy artillery on the city center, killing around 450 and leveling almost all of the structures that stood where you now see buildings standing in this picture. 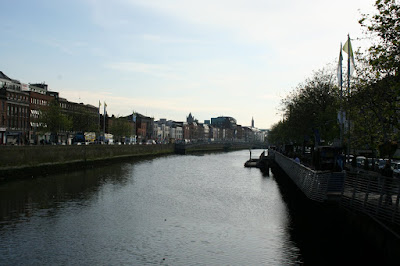 The River Liffey...the heart and sole of Dublin...literally: the river runs through the heart of the city, but is a tidal river and absolutely filthy. This river is the reason the city is here today. Dublin was founded in the 800's as a Viking "settlement", and by "settlement", I mean a staging point for all that good, old-fashioned, Viking-style raping and pillaging throughout the Irish countryside. 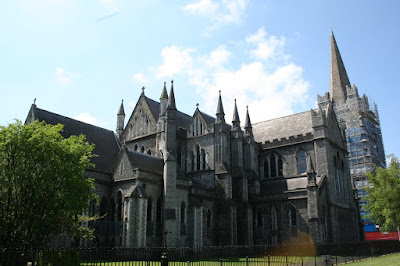 St. Patrick's Cathedral...of course, under renovations. This old beauty was founded in 1191, and has seen everything from Archbishops to horseshit, as it was used by the English, namelyThomas Cromwell, as a stable for his cavalry. Thankfully, it was restored by Benjamin Guinness (yes the son of Arthur Guinness, the brewer of...well...you know) in the 1860's. 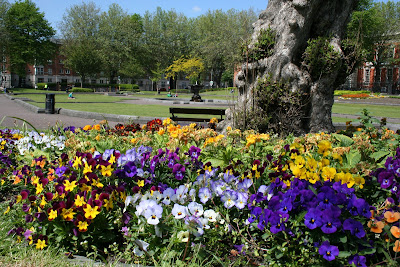 Just some flowers in the afternoon sun at the park outside of St. Patrick's. Missy and I basked in the sun here for an hour or so to take a bit of the edge off of our jet-lag. 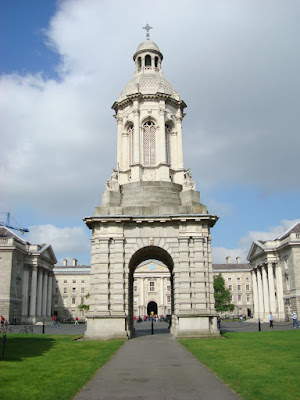 Trinity College. Amazingly beautiful and right in the city center, though you could never be able to tell standing in its central lawns, which are totally cut off from the rest of the city by the college's main buildings. 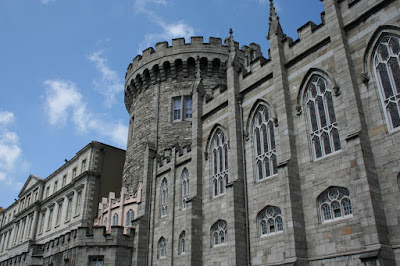 Dublin Castle...the English "governed" Ireland from here until 1922, when the Irish Free State was established. The round tower is all that remains of the original castle that was built in the 13th century. 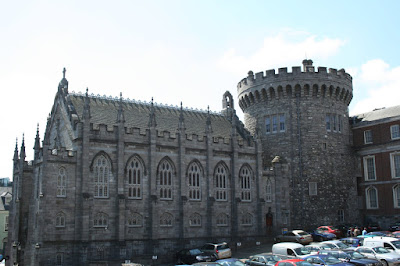 Chapel Royal, the old Anglican chapel, which became a Roman Catholic church in 1943, but it is no longer in use. 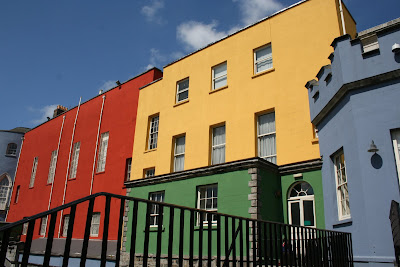 Some of the bright colors on the modern castle exterior. I absolutely loved how the Irish painted their buildings all sorts of vibrant, and random, shades. 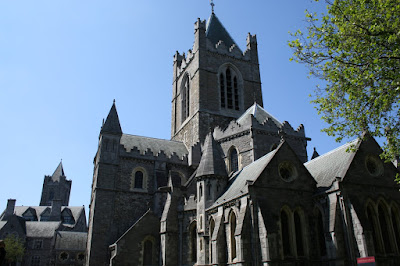 Christ Church Cathedral. This is the older of the two famous Dublin cathedrals (the other being St. Patrick's), as it's construction was started in 1038. Missy and I went inside here, and we were absolutely floored by its beauty...I especially so by its, well, floors. The flooring was a massive geometric mosaic of small, brightly colored tiles. I loved it. The crypt was quite impressive as well...the largest cathedral crypt in Britain and Ireland. The cathedral also displays some pretty interesting artifacts, tombs, and random collectibles. Most notable amongst these are the tomb of Strongbow, which isn't the actual tomb that was destroyed in an old structural collapse (ironic that they still boast this tomb considering Strongbow was one of the first British warlords to establish English rule over Ireland), and the mummified remains of a cat and a rat that were found inside one of the organ's massive pipes. 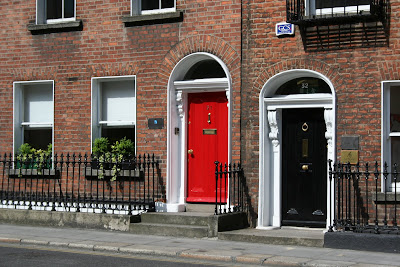 Some of Dublin's famous Georgian doors. Reading about Georgian architecture as the "height of Irish architecture", I was really looking forward to something impressive. Instead, I found bright doors with intricate door frames stuck onto disturbingly bland, brick boxes. Oh well, the doors were pretty cool. 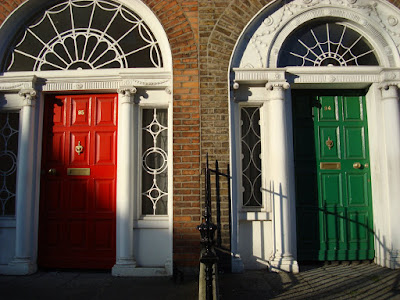 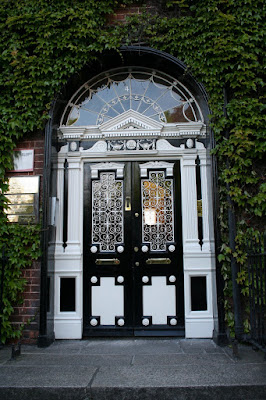 This was by far the most intricate one we found. 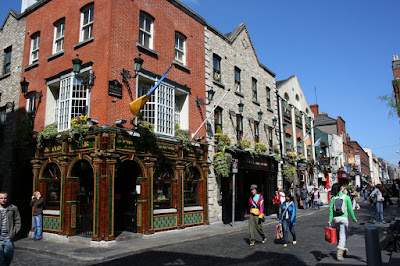 Temple Bar: Dublin's place for tourists to go drinking (for 5 to 7 Euro, US$7.50 - 11.00, a pint). Missy and I split one at The Temple Bar (see below) before hitting up a Dublin Pub that actually had real Dubliners in it on the north side of the Liffey. The pub was called the Cobblestone, and it is locally quite well known for its great traditional music sessions...which are especially good on Thursday night. All I can say is that we met real Irish people there...which I can almost guarantee could not be said for the hundreds of tourists cramming into the various Temple Bar establishments. 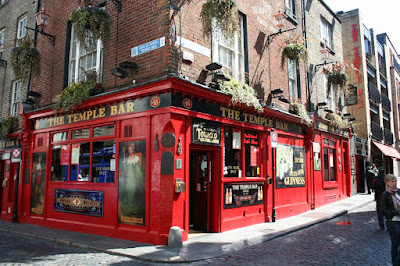 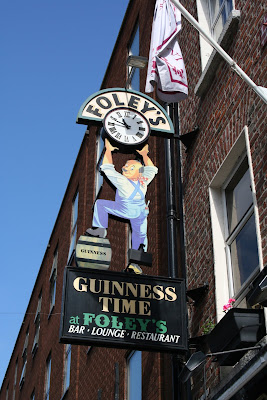 We saw some great Guinness signs. 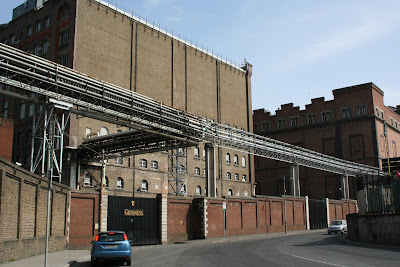 At US$22 per person to get in, unfortunately we had to skip the Guinness Storehouse tour. I already know quite well how beer is made, and we could get a pint for a lot cheaper elsewhere. I must admit though, the rumors are true: the Guinness, Murphy's, Kilkenny, and other Irish draughts are much, much better there in Ireland than anywhere else. 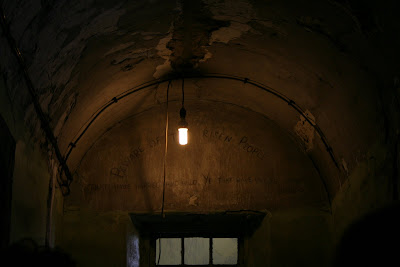 Prison graffiti inside Kilmainham Gaol. For only US$4.00, this was well worth the tour. This gaol (jail by our spelling) is another hotspot of Irish Republican history. 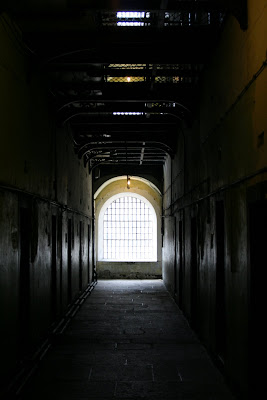 One of the corridors in the old wing of the gaol. Kilmainham was built to replace an older form of prison, in which men, women, and children inmates were all housed in one big locked room....and knowing the stories coming out of the prisons nowadays, you can imagine how terrible that must have been (mostly for the women and children). This wing of Kilmainham was designed under the philosophy that prisoners could not be rehabilitated, only punished. Thus, the corridors and cells were not lit or heated, and there was no glass or coverings on any of the corridors barred windows (none of the cells had windows, only small holes in the doors for guards to look into). These cells would have been living hell. 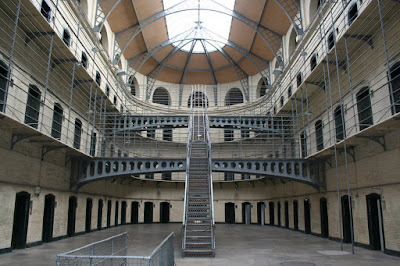 And enter the Victorian wing, built under the philosophy that prisoners could be rehabilitated through exposure to natural light and complete silence. The main staircase and walkways you see in the center was for guards only. All food was cooked in the kitchens underneath this area, which would have been warm. Being imprisoned here would be like staying at a 4 star resort compared to the old wing. 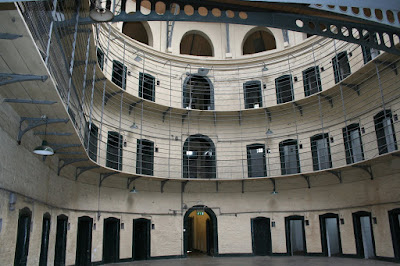 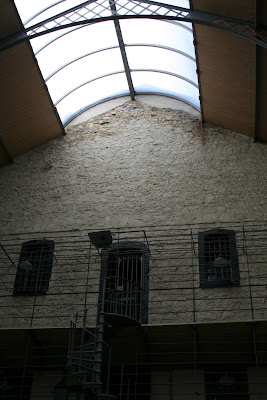 The circular stair seen here is the staircase that the prisoners had to use when they were allowed to move about. A circular staircase is very difficult to maneuver in case any of them had any desire to make a break for it. 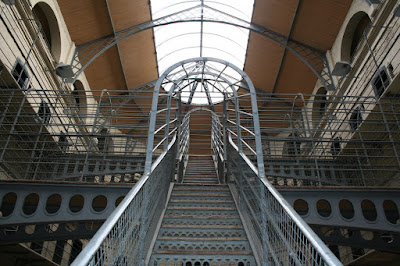 Guard's staircase again: straight and easy to maneuver to get about quickly in case of trouble (i.e. one of the prisoners tumbling down the circular staircase because they decided to make a break for it). 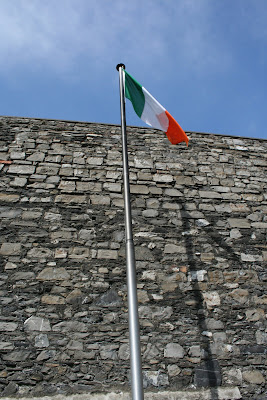 In the courtyard/stone cutting area. This Republic of Ireland flag and a plaque stand to honor the leaders of the 1916 Easter Rising, all of whom were imprisoned here at Kilmainham (most of them in the old wings) before being executed in this very courtyard. These executions are one of the most important in a chain of events that led up the the Irish Free State of 1922. The Easter Rising took place from April 24 - 30, 1916 in Dublin. The leaders established their headquarters in the General Post Office (seen in the first picture on this post), and it was from there that the Proclamation of the Republic, which was a declaration of independence from British rule, was read by Patrick Pearse. I've already mentioned that the British quickly resorted to using heavy artillery against the Republicans, as well as Dublin civilians, and the Rising was put down after six days of fighting, both in and out of Dublin. 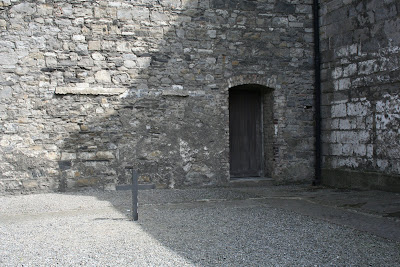 One of two crosses set in the courtyard on the place where the Easter Rising leaders were executed. One of them, James Connolly, was so badly injured by his British interrogators, that he had to be brought to the gaol in a military ambulance, carried to the courtyard in a stretcher, and then tied to a chair to be shot. These executions made quick martyrs of the Rising leaders, and Connolly's execution especially, in the fact that he was so badly beaten that he was unable to even stand and face his doom, outraged the Irish people. It would be very interesting, if they were alive to see Ireland today, to hear what they have to say about its burgeoning economy, full independence, position in the EU, and the fact that Northern Ireland is still a part of the United Kingdom...
Posted by Drew at 7:43 AM No comments: