It has been called the greatest show on Earth... the seemingly endless Serengeti plains filled horizon to horizon with a seething sea of large mammals wandering chaotically, ever-driven by some unseen primordial force.   This is The Great Migration. 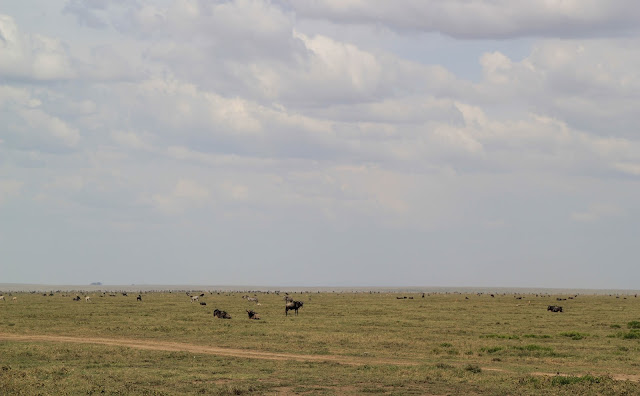 We were strategic in our travel planning.  We were in Tanzania in February, which is one of two times during the year when you are ensured to get a good show in Serengeti.  We had pretty high hopes, and we were simply blown away by what we ended up seeing.  Signs of the Migration teased us along the horizon as we approached the park; it was hard to comprehend that each of those dots was a large mammal. 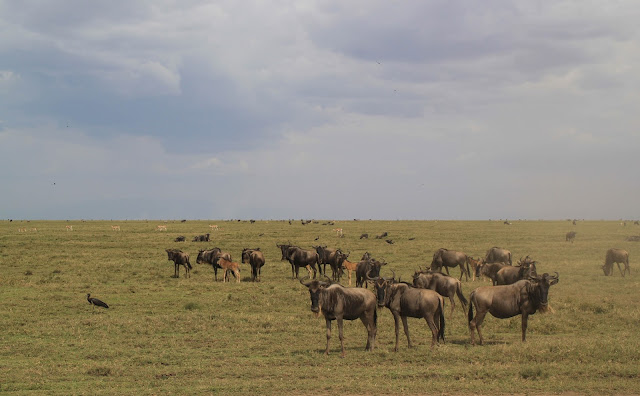 The migration is made up primarily of two species: wildebeest... 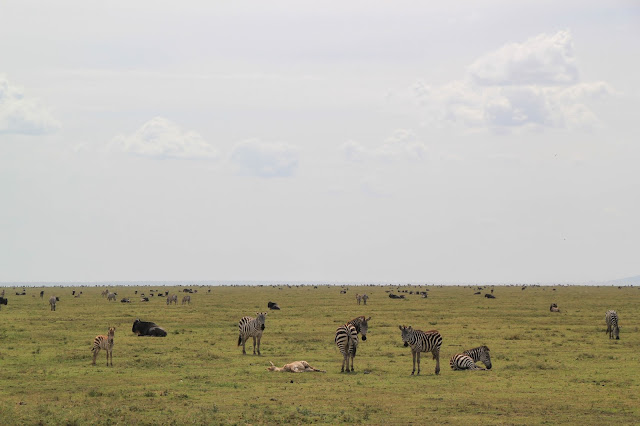 In addition to all those adults, there were also plenty of babies... from both of these species plus many more.  Here, a baby zebra is lounging in the warm sun.  But the Serengeti is a deadly place - as my last post clearly demonstrated - and the young must stick with the herd or else face certain death on the plains. 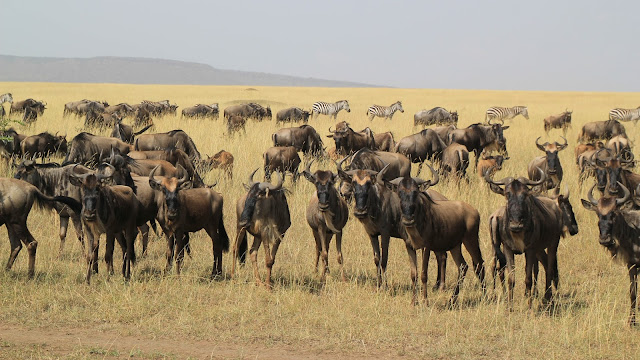 The wildebeest were especially vigilant, and the males regularly formed a wall like this between us and the rest of the herd.  Meanwhile, the zebras seemed more skittish and wary of us in general. 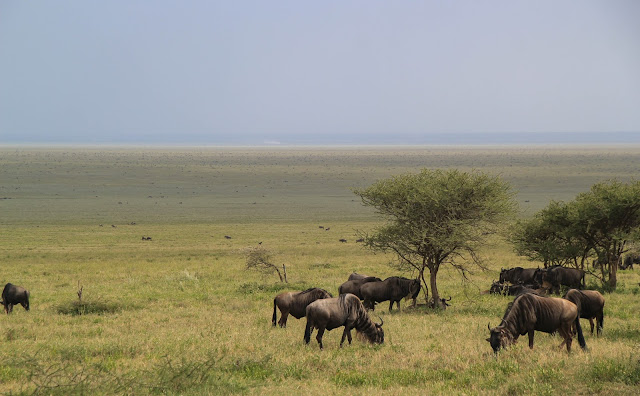 The high ground around the park entrance offered our first incomprehensible glimpse of what we'd been driving through, and the sheer magnitude of what was in store for us in the days ahead. 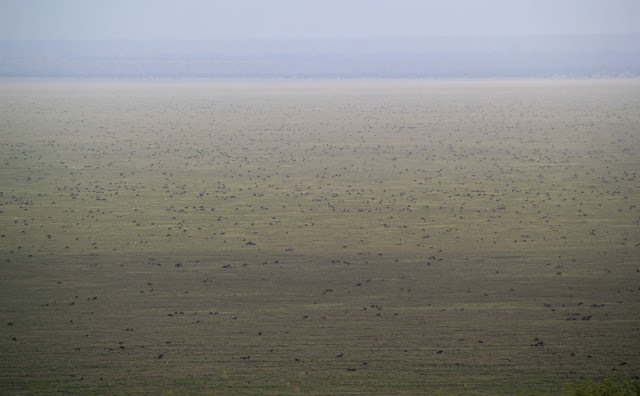 Yes, each of those spots is an animal.  The migration consists of upwards of 1.5 million wildebeest and hundreds of thousands of zebras making an annual circuitous route in constant pursuit of water and food.  Along the way, they serve as a roving buffet supporting a range of predators and scavengers. 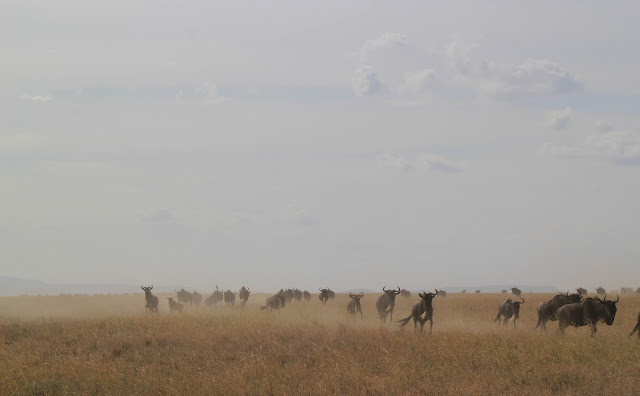 The horizon was often dusty with their passage. 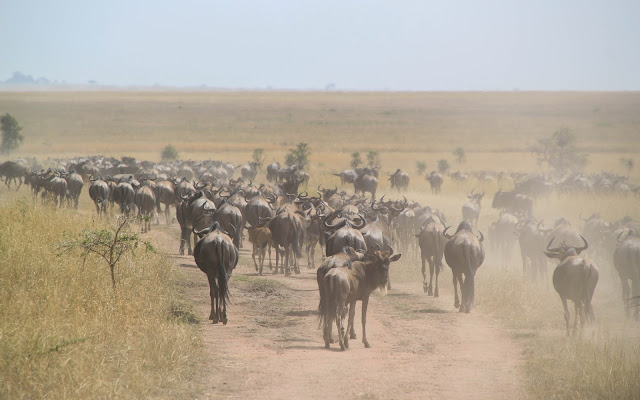 These photos don't do justice for the shear scale of this.  Being there in person really let one grasp the magnitude of a column of large mammals stretching from horizon to horizon, let alone the added impact from the motions, sounds, and smells of so many animals.

At times, the herds form up to stretch from horizon to horizon in mostly a single line. 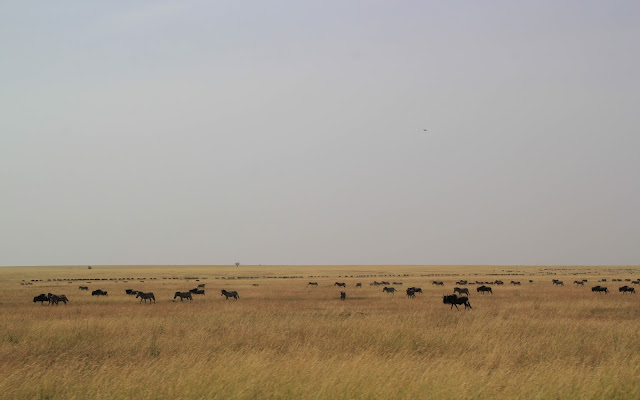 In other places, they spread out and fill huge areas.

The annual route of the Migration covers approximately 800 km (500 mi)... these animals cover a lot of distance. 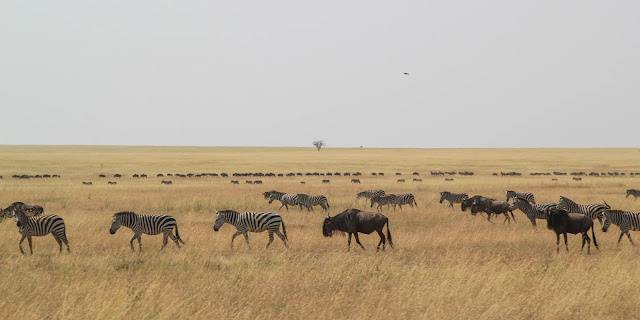 I loved this shot, with the column of animals snaking into the distance.  In addition to predation by lions, hyenas, leopards, wild dogs, and crocodiles, many of these animals also end up dying of starvation or thirst. 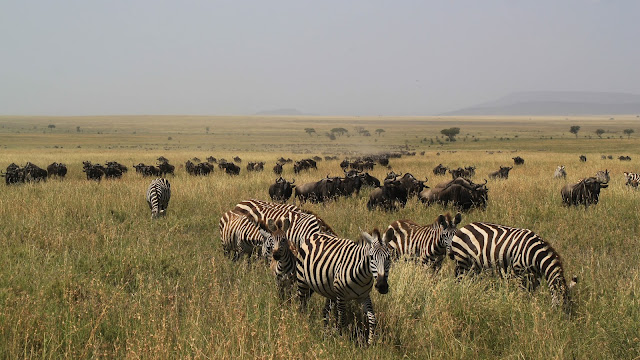 However, we were there in the little dry season, lasting ~2 months between periods of heavy rains, so there was plenty of water and lush grass to be had. 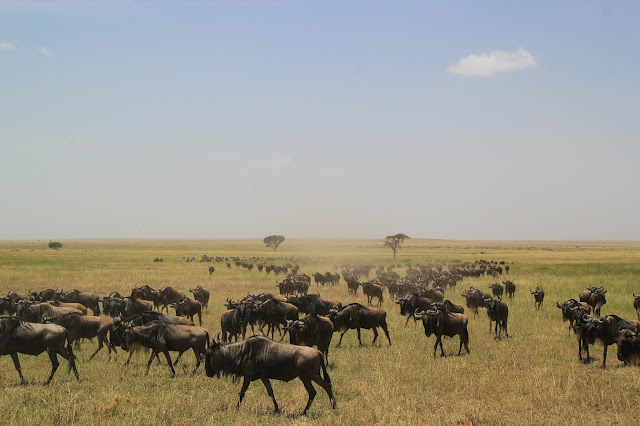 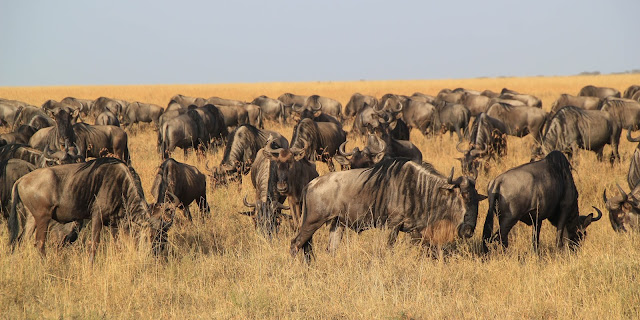 Zooming in, wildebeest are really quite beautiful and unique animals.  Like zebras, they too have stripes across their necks and shoulders. 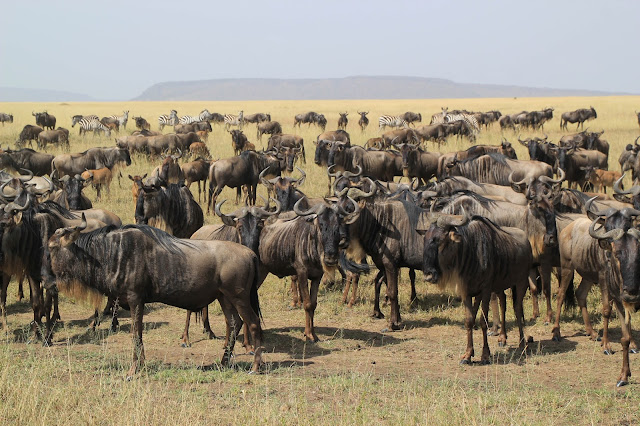 The wildebeest were wary of us, clearly acknowledging our presence and keeping an eye on us as we passed amongst them, but they didn't seem to be afraid of us. 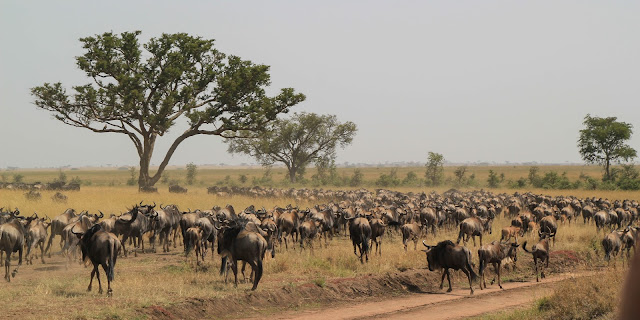 There are few great migrations like this remaining on the great plains of planet Earth thanks to the spread of humanity and our ever more demanding need for farmland and ranch land.  It's sad that the Great Plains of North America used to be the domain of a migration of similar magnitude but with millions of even larger animals than these, the American bison.  It's also devastating that rhinos used to number in the millions and share the Serengeti with the migrating wildebeest and zebras.  Now rhinos are critically endangered; we saw none during our three days in the Serengeti.

We saw lots of wildebeest and zebras though. 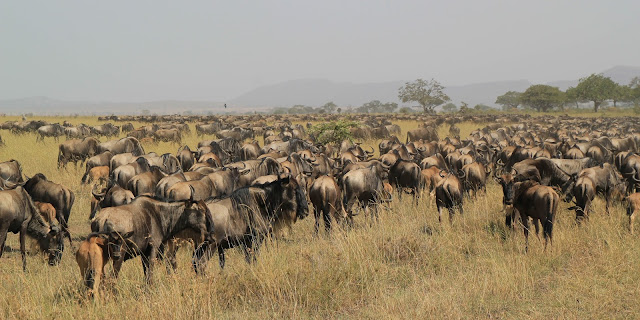 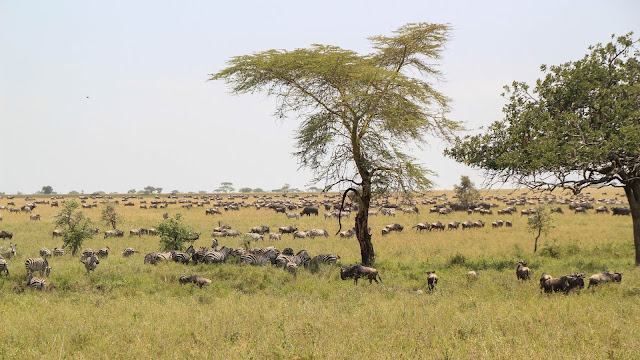 As the other Serengeti posts have shown, there were plenty of other animals as well., like these gazelles.

My favorites were the enormous elephants.  Often, they were on their own, separate from the other herd animals, but every once in a while we saw them moving through the herds of wildebeest and zebra.

As my last two posts highlighted.  These animals face a number of threats from an array of predators that share the Serengeti with them.  One example is the threat of lions.  Whenever we saw the herds near kopjes like this, I wondered if there were lions hiding amongst those rocks.  Often, there probably were lions closer than we knew, but the lions typically wait until night to hunt.  Night must be an awful time for these animals on the Serengeti. 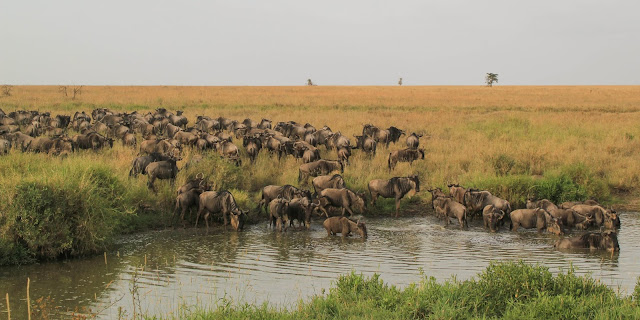 Another threat to the Migration is that of crocodiles.  These poor animals can't even take a drink without dreading what might be lurking just beneath the surface, waiting to pull them in and eat them.

These herds rely on strength in numbers and statistics.  The overwhelming numbers are more than the predators could ever take, and the species openly sacrifice individuals to ensure the survival of the herd.  The weak and infirm and uncared-for young are almost certain to be taken by predators, but that actually leaves the herd stronger since only the strongest, fastest, smartest animals will live to reproduce. 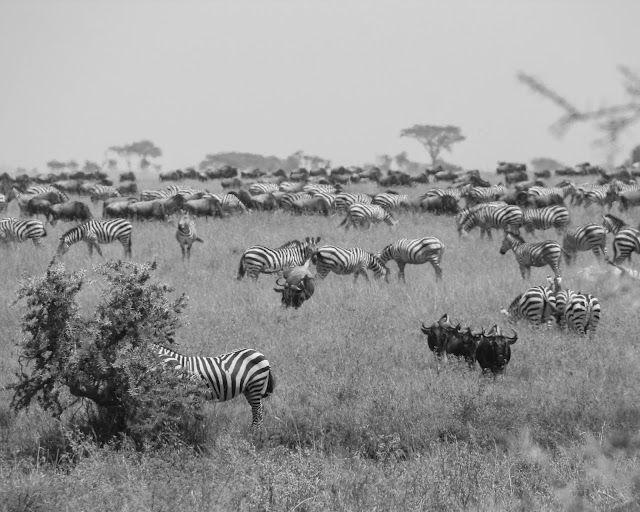 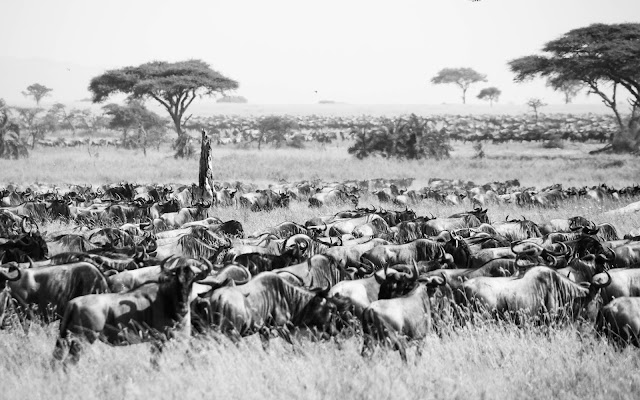 The Great Migration is something than any wildlife and nature enthusiast should see.  As cliche as it may be, the migration is well deserving of its title: The Greatest Show on Earth.