One of my favorite things to do with a long weekend in California is to pack the camping gear in the car and head out for a road trip, taking in the state's variety of spectacular natural landscapes along the way.  Last May, we did exactly that: heading off for a long weekend of travel up and down both sides of the Sierra Nevada mountains. 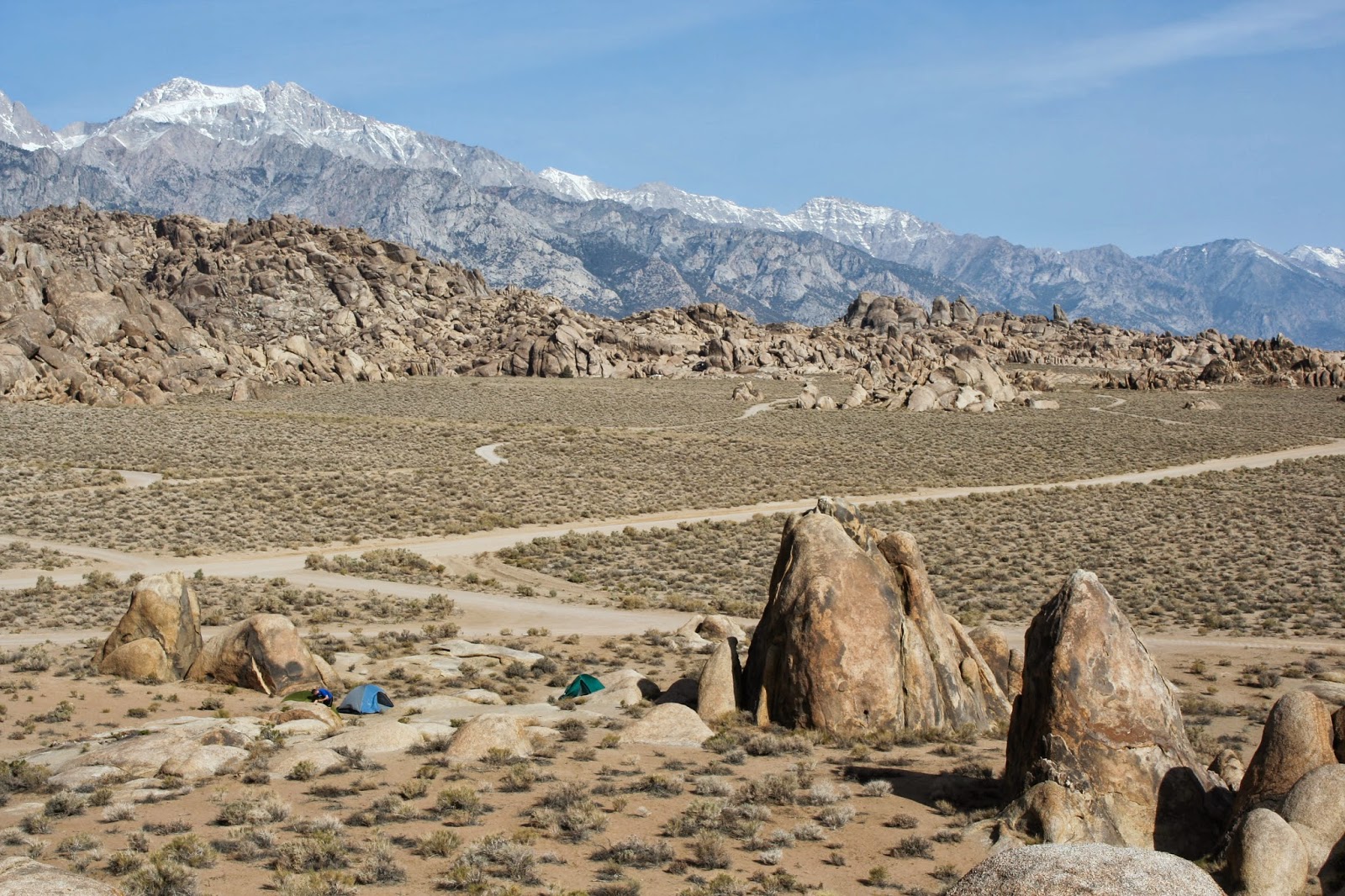 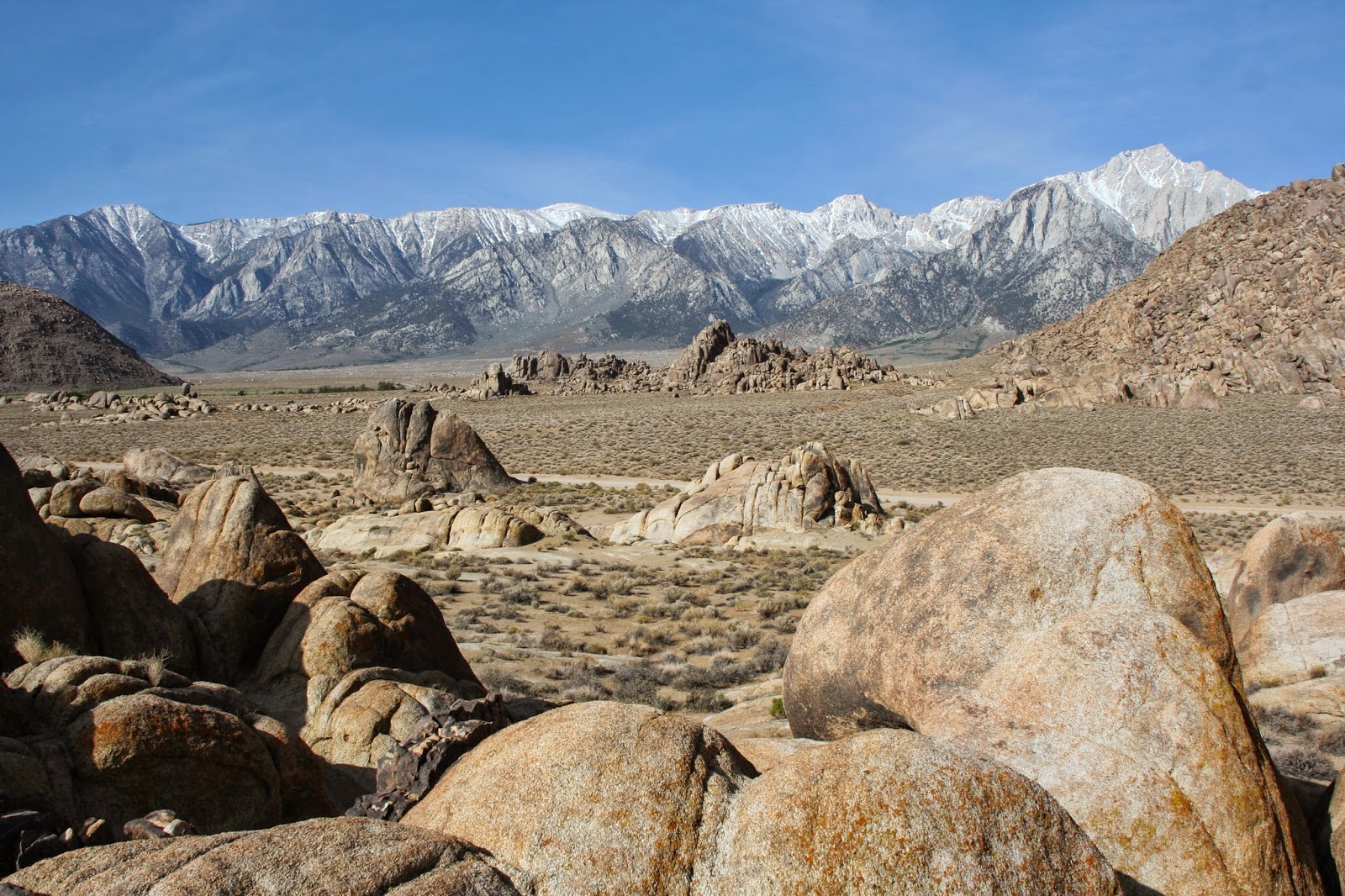 As usual when we head up U.S. highway 395, we stopped for our first night to camp in the Alabama Hills BLM zone.  California's Bureau of Land Management (BLM) manages an enormous amount of acreage of uninhabited desert land around the state.  This land is open to the public, and you can set up camp freely.  I certainly hope that people continue to respect BLM land as much as they should any protected wilderness or park land, so that such spaces remain open and unrestricted as they are currently.

There is a network of dirt roads and 4x4 trails through Alabama Hills, which sit at the foot of the imposing wall of mountains that makes up the High Sierra.  The contrast of landscapes, from empty rock-strewn desert to forest flanked alpine peaks, is stunning and the sharp gradient plus the rugged look of mountains themselves command respect.  It is no wonder that this landscape has so often served Hollywood when filming Western movies.  Taking a short hike away from your campsite and looking back at your tiny tent in the middle of that huge open space (top picture; yep, those are our tents) is something to truly appreciate.  The boulders themselves are quite organic too... bubbling up out of the earth somewhat randomly.   The giant rocks are quite textured, so they are relatively easy to scramble all over, offering plenty of great vantage points.   The thing I love most about Alabama Hills though is the night sky from there.  During the summer half of the year, the Milky Way takes center stage in a huge dark sky full of stars; the horizon is not very affected by the glow of big cities nearby... better than most places in the contiguous US at least.  On this trip, we were lucky to be treated to a meteor shower too. 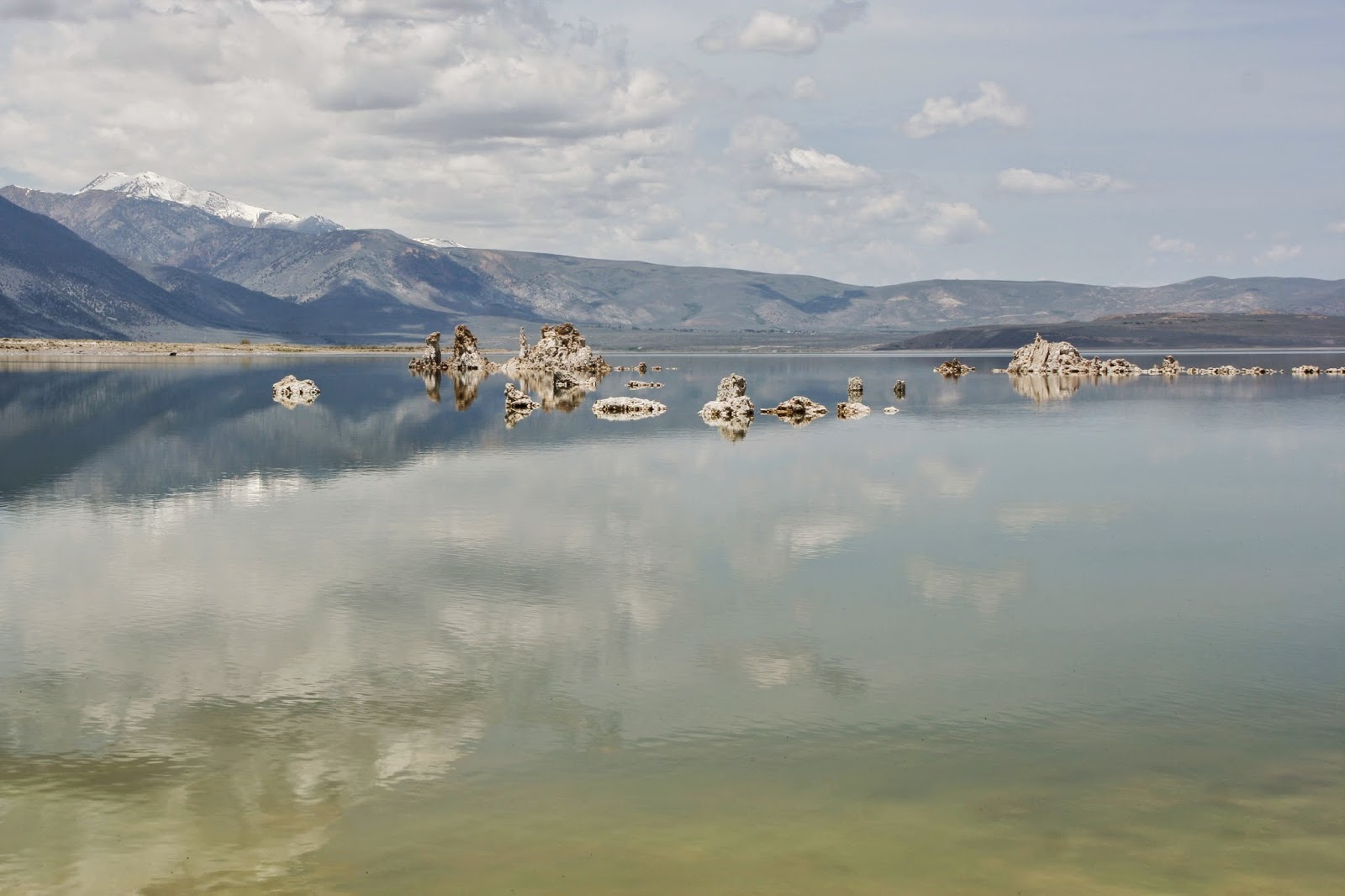 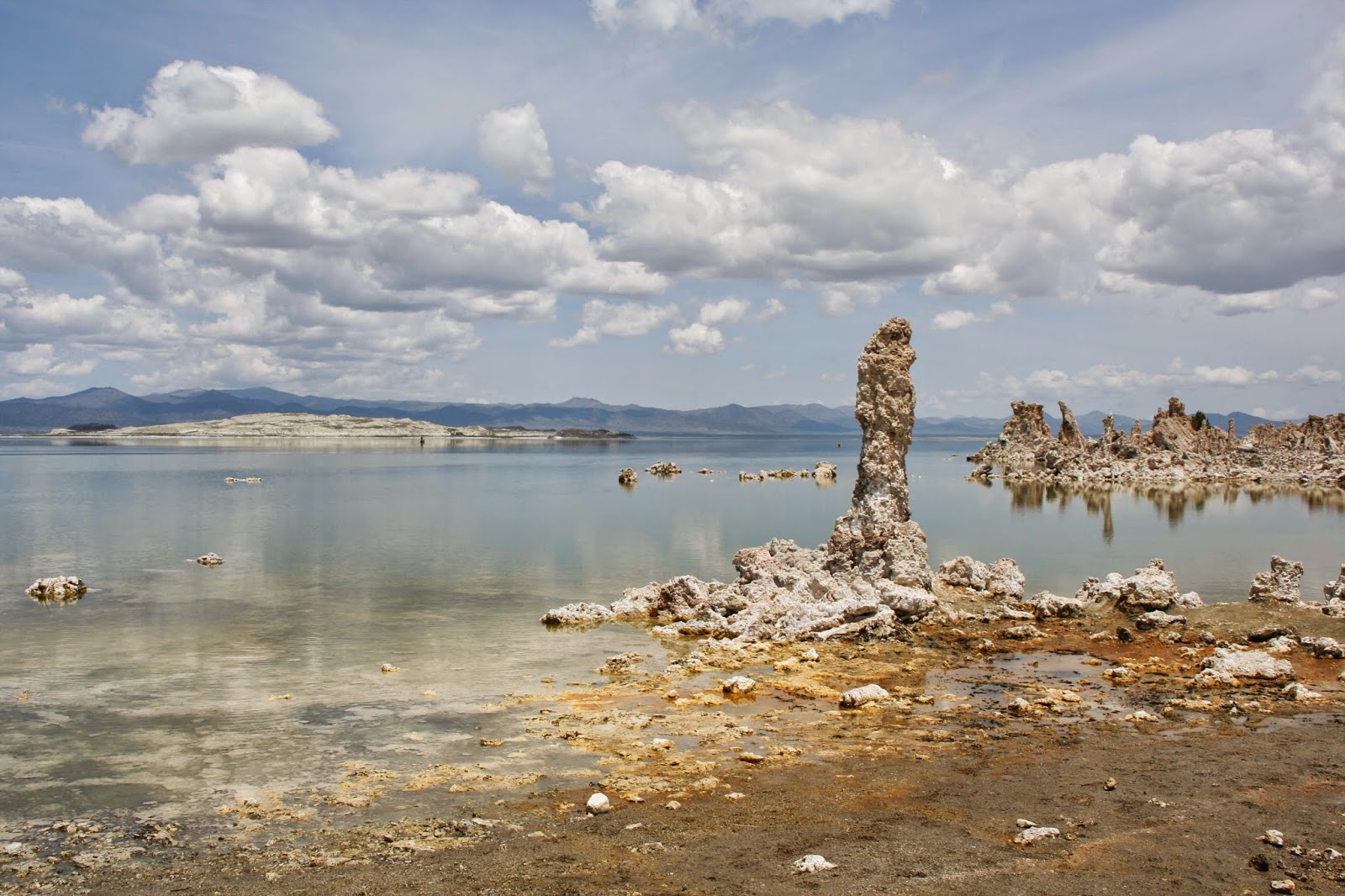 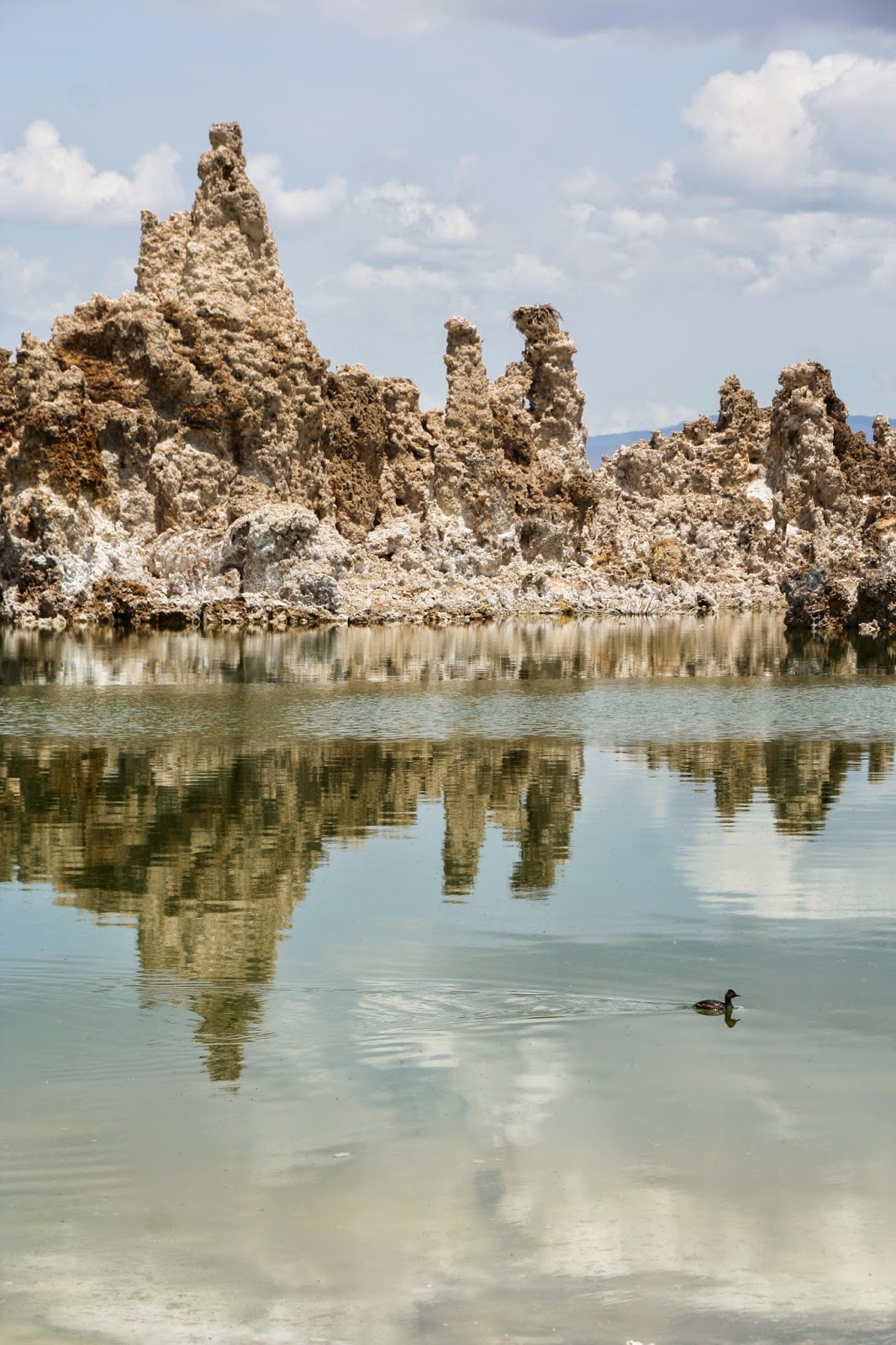 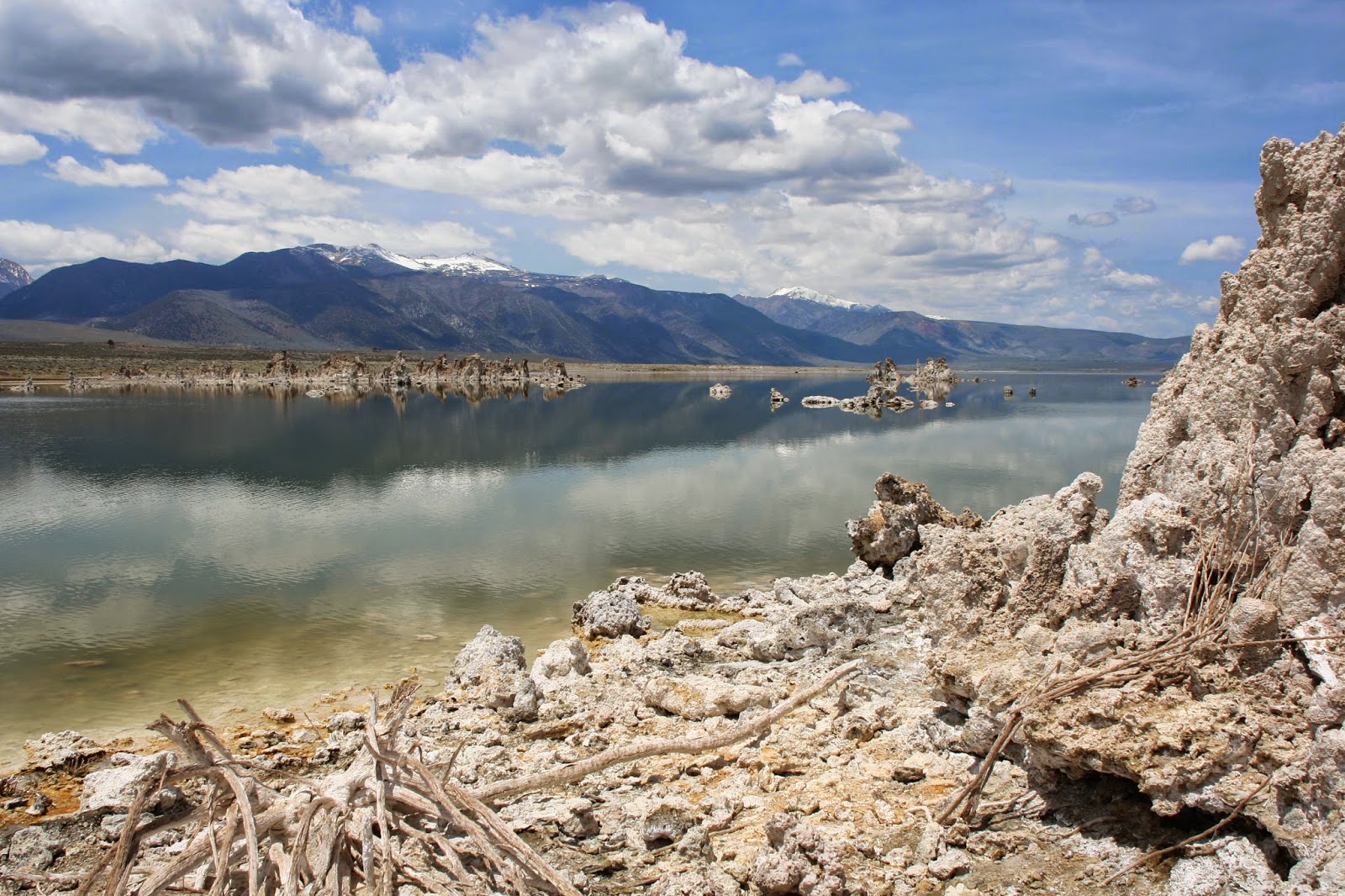 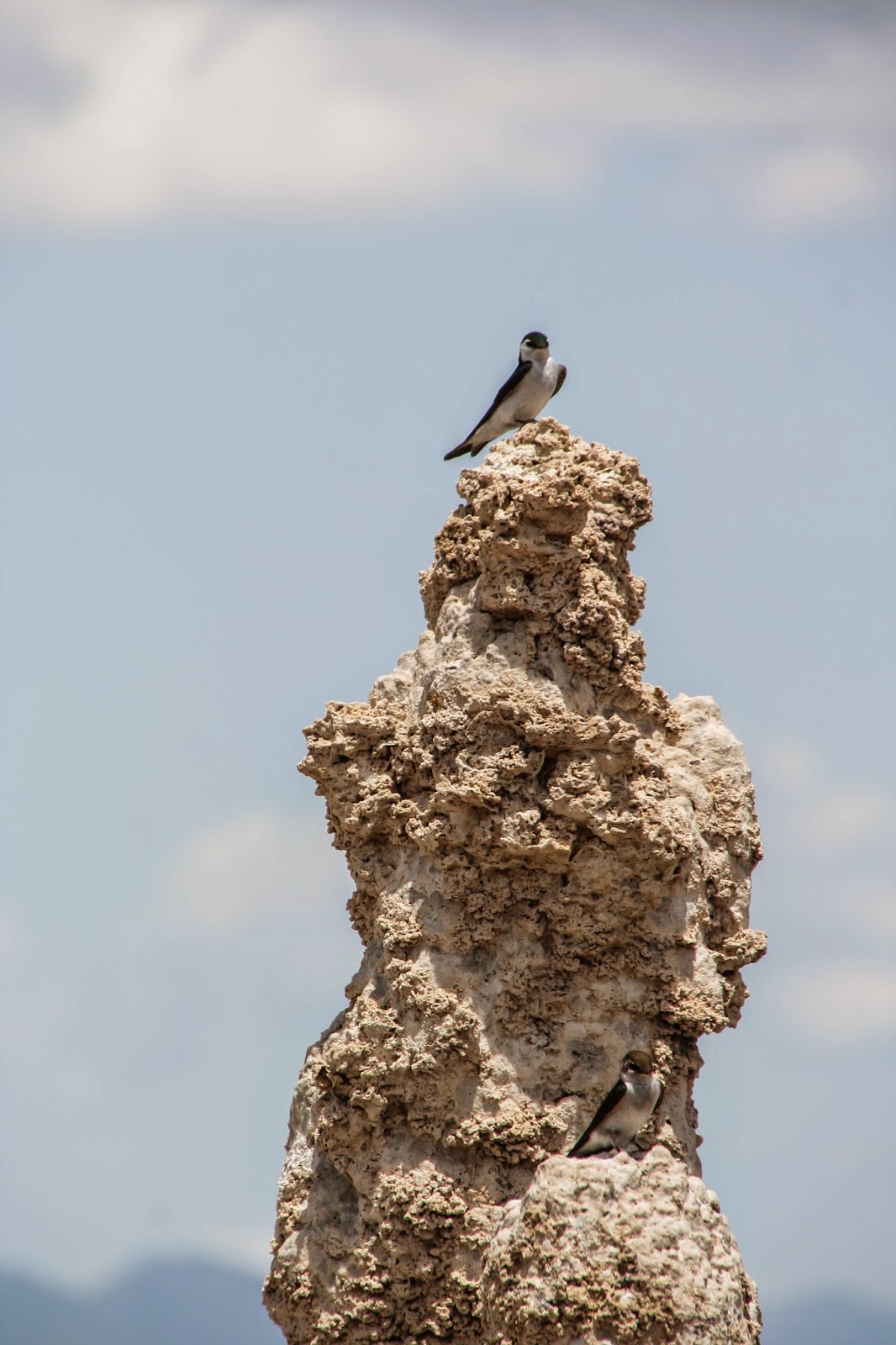 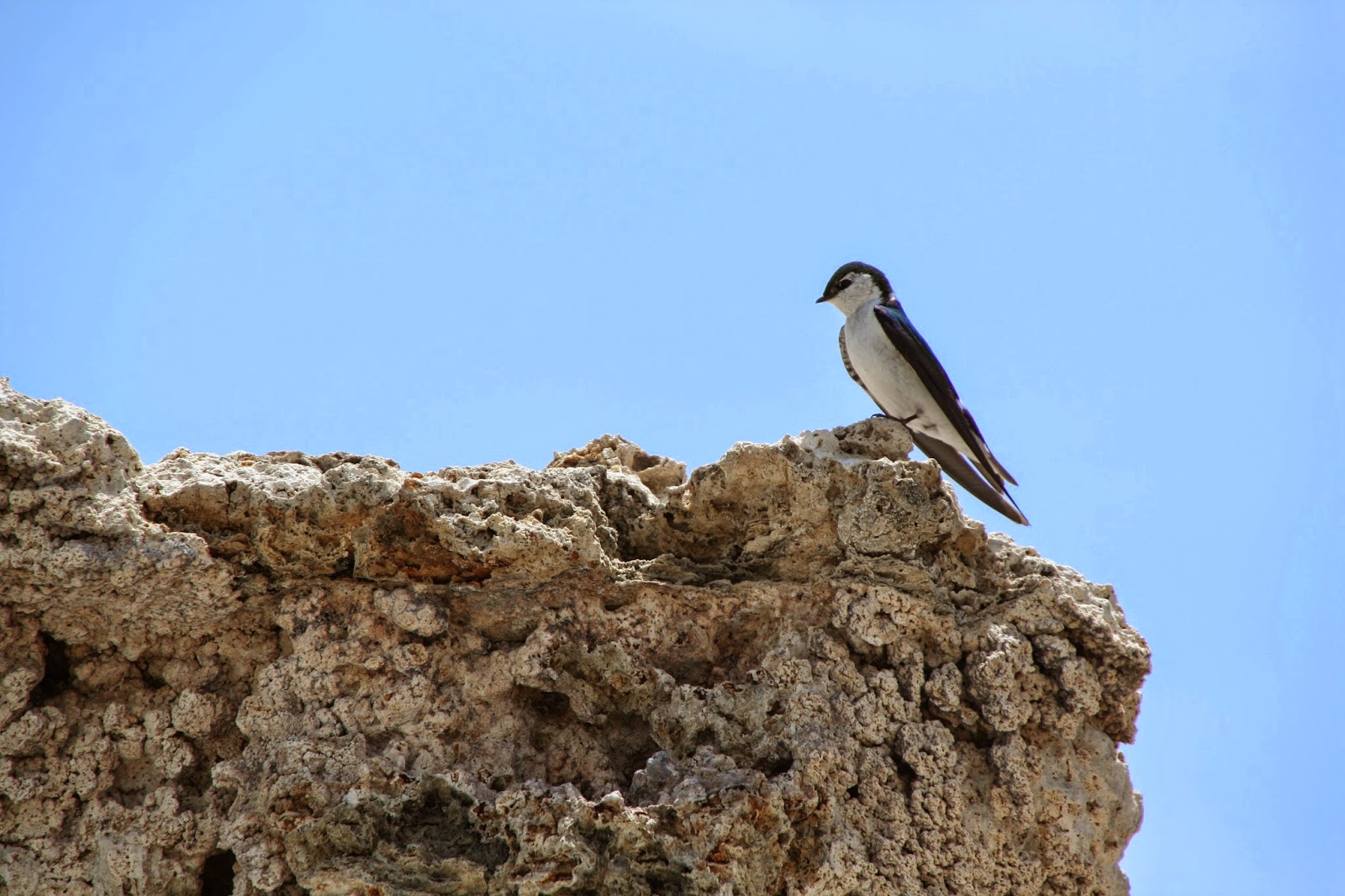 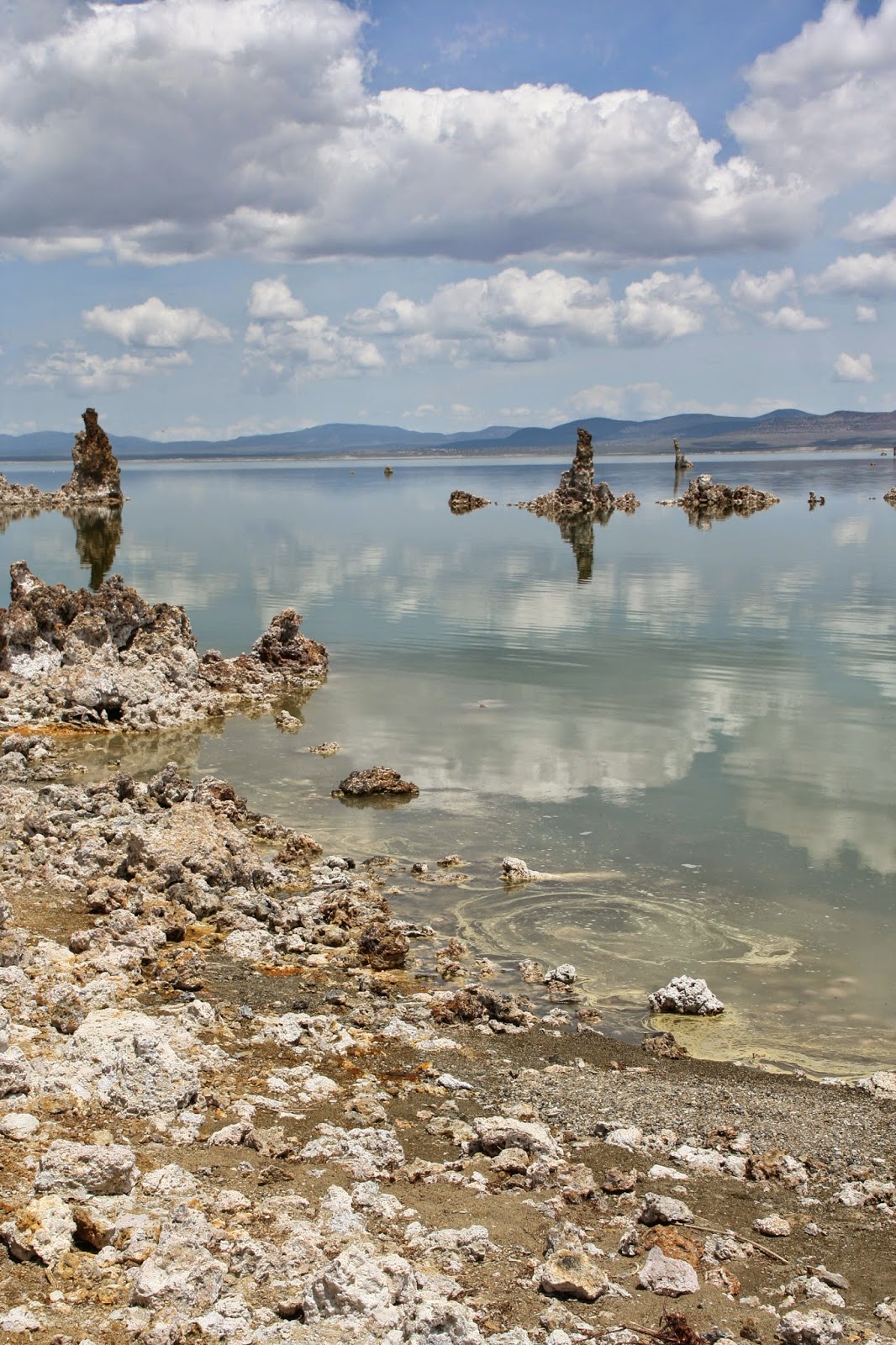 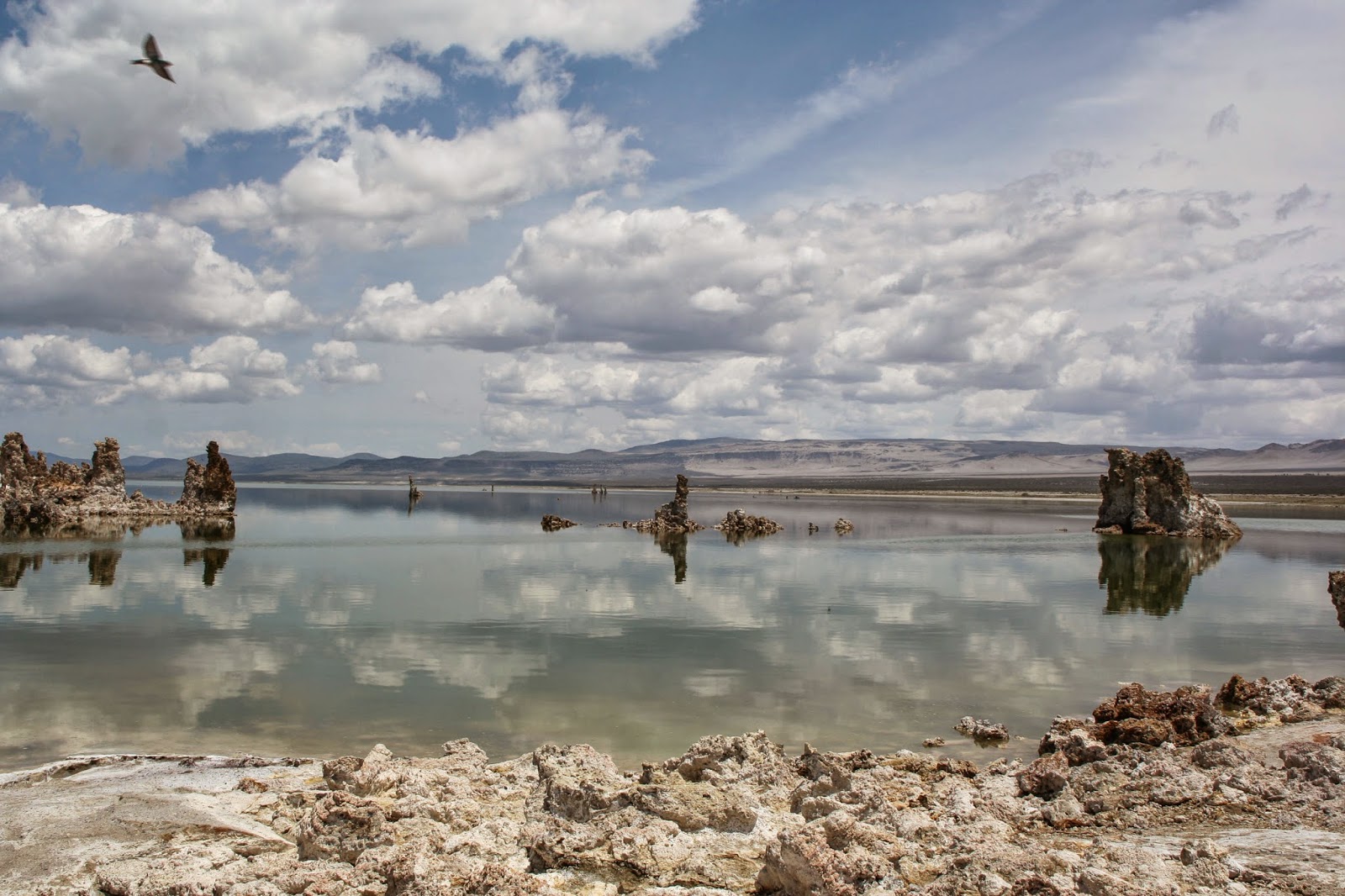 Day 2 and next stop: Mono Lake.  This place is more like something from an alien planet... with its tufa towers shooting up out of the cloudy, highly reflective surface of the lake.  Mono Lake is a saline soda lake, with alkaline water that is rich in salts.  The lake's chemistry makes for a somewhat unique ecosystem: the water is ideal for "sea monkeys" (brine shrimp), which in turn provide an abundant source of food for alkali flies and plenty of species of water and shore birds.  Then there are all the sparrows... they buzz around like so many little stunt planes, gorging themselves on an endless buffet of alkali flies.

Sadly, the lake isn't really the natural paradise that it looks to be to all those tourists that visit each year.  Those tufa towers, which took hundreds of thousands of years to form, aren't supposed to be above the water... Mono Lake has suffered from Southern California's insatiable demand for water.  The lake and its tributaries have been protected since 1994, which spared it from becoming a dry lake basin like its neighbor to the south, Owens Lake, is during dry years.

Anyway, Mono Lake is a beautiful and bizarre place to visit.  Looking closely at the water, you notice the sheen to it... almost as if it is soapy.  It is slick to the touch, salty to taste, and looks quite hazy and iridescent.  Its optical qualities make the lake a nice reflective surface, giving you so many mirror images of the tufa towers and surrounding mountains and terrain.  Then there is the wildlife... I was intrigued by the swallows and water fowl.  I'm no avid birdwatcher, but I could have sat and watched them go about their business for hours.  On the surface, the lake seems like somewhat of a desolate place, but it is actually teeming with life.  Hopefully, we haven't already caused irreparable damage to this wonderful ecosystem and our protection efforts aren't in vain. Back on the road, of course with a few stops to take in some of the spectacular beauty that is common along the way... every time I venture into the Sierra Nevada, I'm blown away by the sheer size of this mountain range.  It is vast and full of so many beautiful little nooks and crannies. 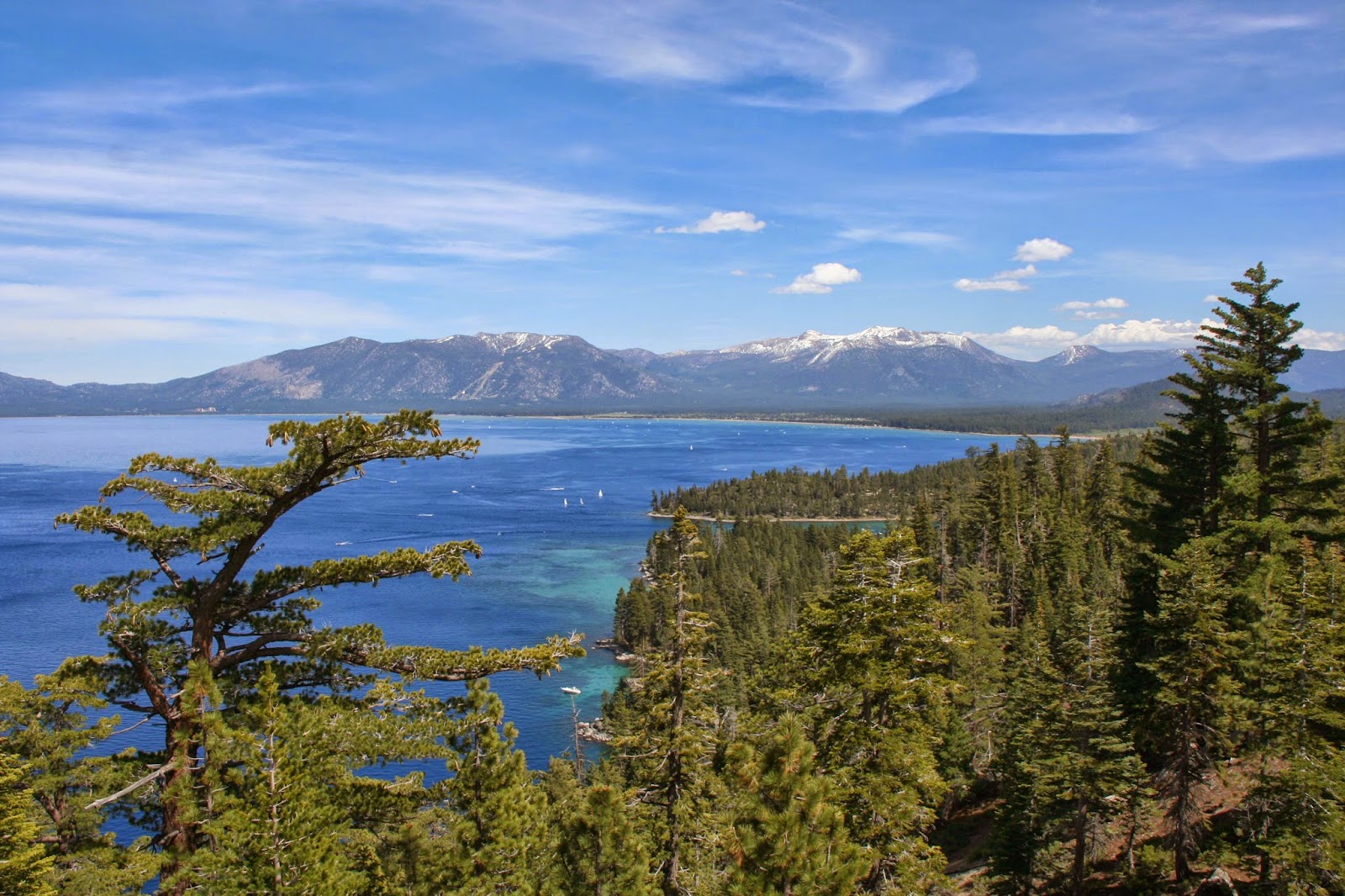 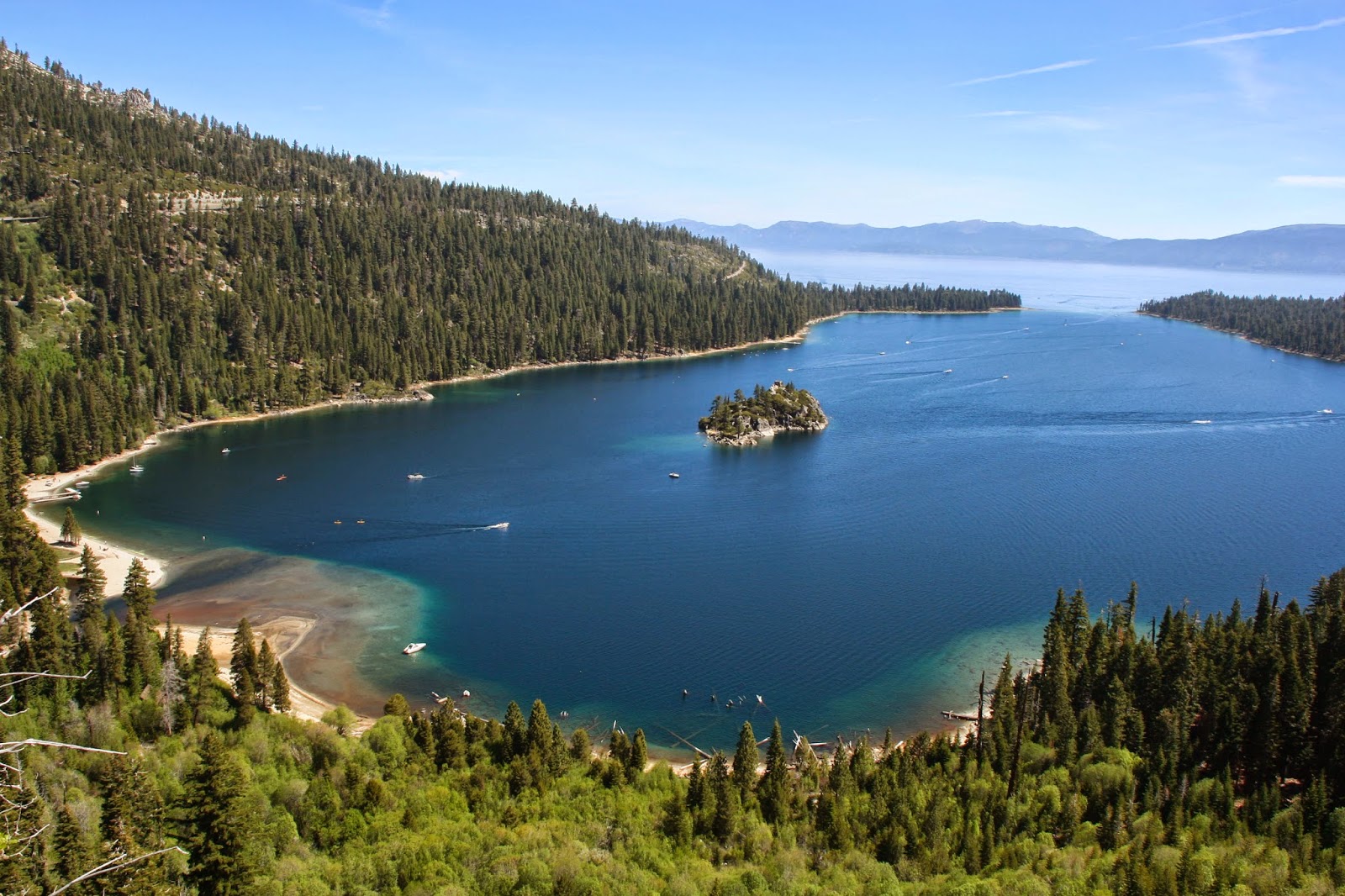 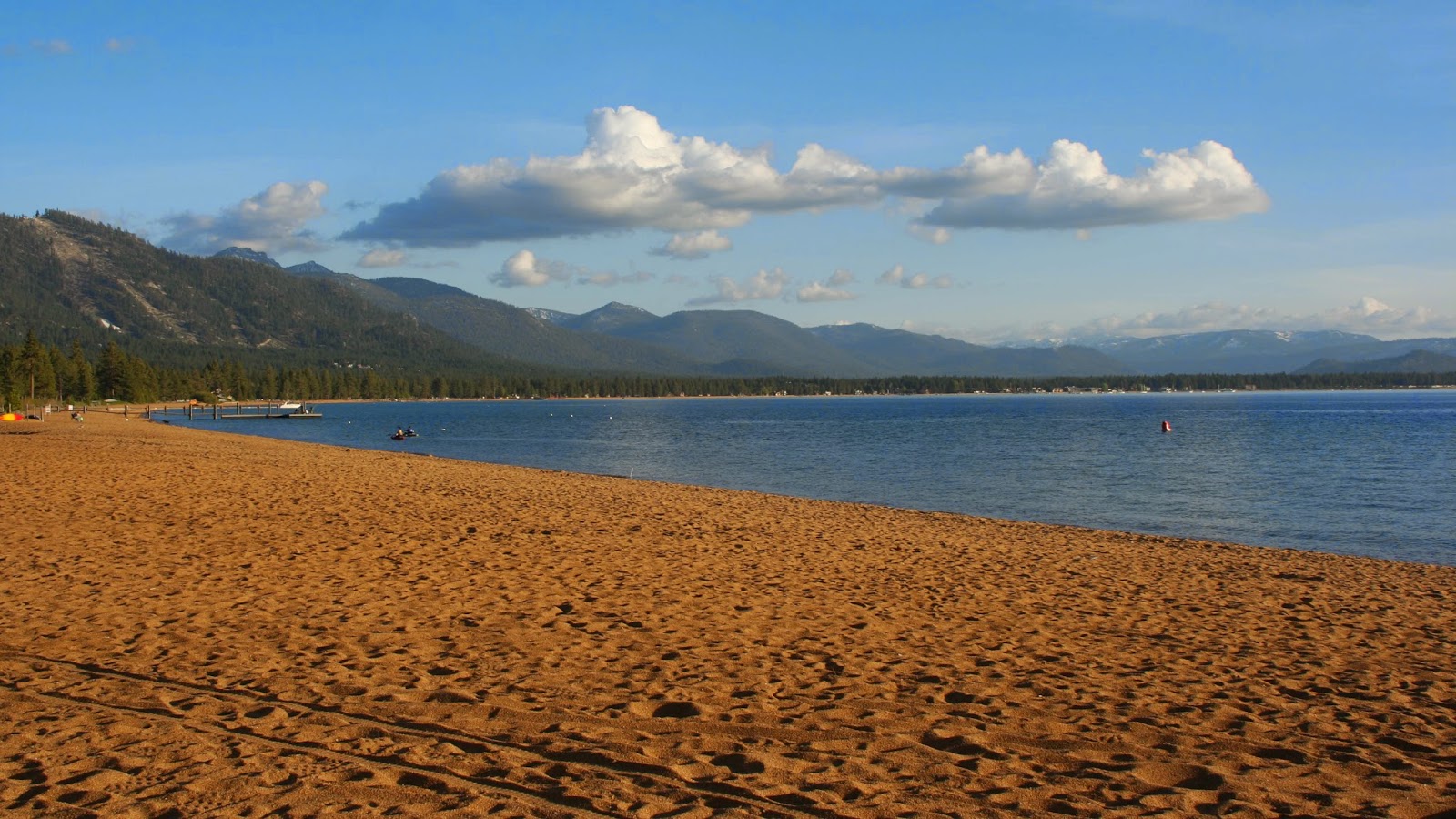 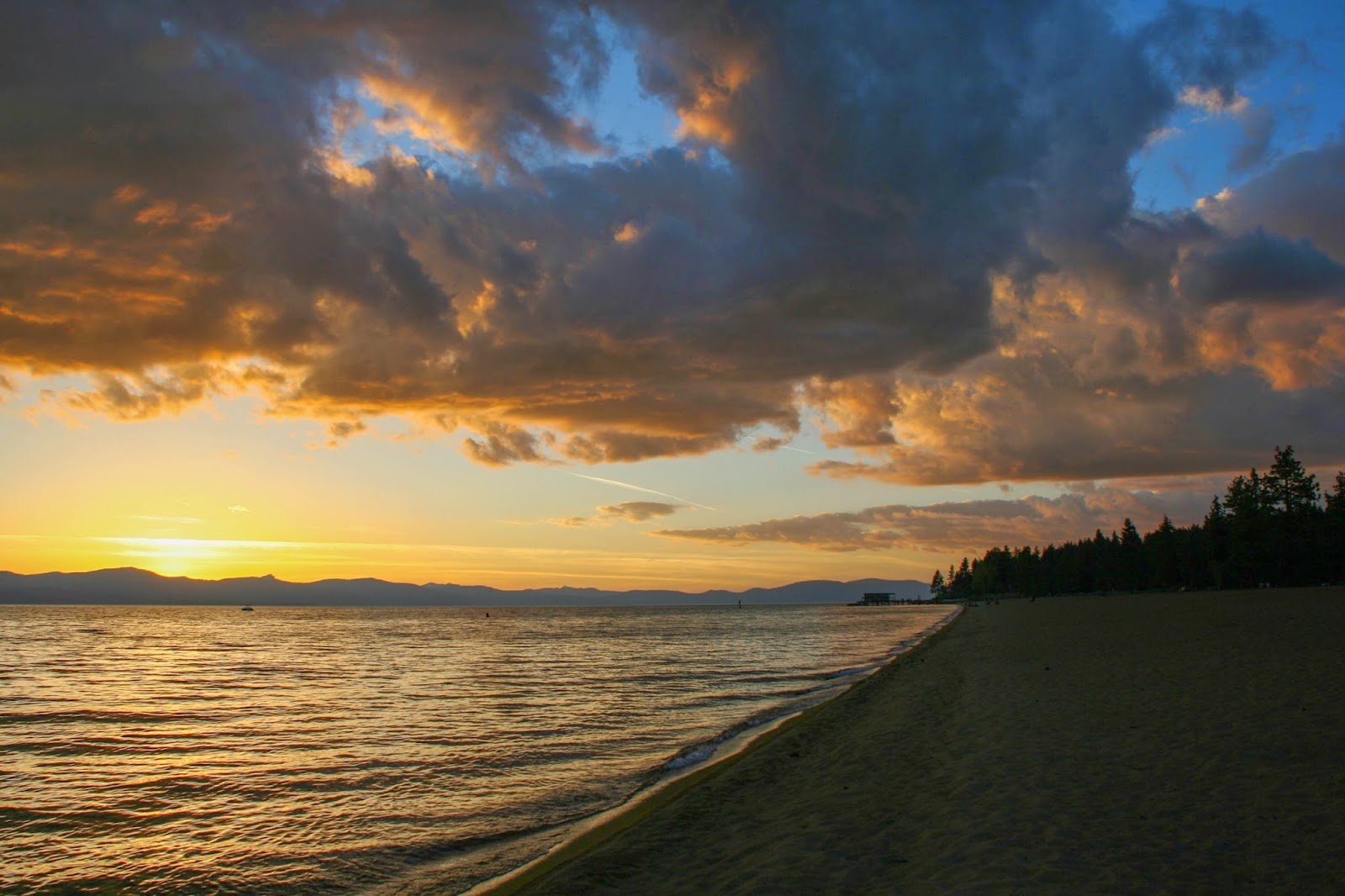 Our main goal on this road trip was one of the Sierra's biggest gems, Lake Tahoe.  If you live in LA, Tahoe is pretty far out there... may as well be in Utah for all practical purposes.  But Tahoe isn't in Utah, it's in California... well mostly.  Lake Tahoe straddles the California-Nevada border. It is the 2nd deepest lake in the United States, which I was quite surprised to find out (the deepest is actually Crater Lake in Oregon), and Tahoe is the 6th largest by volume in the States, after only the Great Lakes!  Check it out on a map... those are both pretty amazing facts when you see how small it is in surface area compared to many other lakes in this country.

Tahoe sits in an enormous, high walled bowl of a valley in the middle of the Sierra Nevada mountains, which is why the lake boasts such volume.  Around the lake is a mix of small resort towns on the southern and western shores (California side), catering to outdoor enthusiasts and people who like to slide down snow-covered slopes with smooth boards attached to their feet.  The northern shore is much less populated and more like its natural self.  Then there is the Nevada side.  Seriously, screw Nevada.  As soon as you cross the border from California, it is just like you've entered into some awkwardly rustic version of Las Vegas.  It's tacky, and it's hideous.  Not only that, but most of the beaches on the Nevada side are private and closed to normal people.  What the hell is that?  The lake is a natural wonder that should be open to and shared by everyone, not closed off and restricted to wealthy landowners or idiots staying at the hotel-casinos along the shoreline.  Nevada should learn to respect its natural places and keep Vegas in Vegas... well, and whatever the hell Reno is.

OK, enough of that rant.  If you're smart and stick to the California side (the only redeeming quality we found on the Nevada side was its sunsets), you can actually appreciate the natural beauty of Tahoe.  For one example, check out Emerald Bay.  The only bad thing is this place is crazy swamped by tourists, who descend upon it like so many locusts, if locusts traveled by personal vehicle, tour bus, boat, and kayak that is.  They come for good reason though; Emerald Bay is spectacular.  The best thing too is just take a hike, either down by the waterfall towards the bay or up into the mountains across the road.  Either way, you very, very quickly get away from the vast majority of those other tourists.   Driving further north along the western shore, you can find more and more patches of forest with hiking and beautiful views over the lake.  There are also plenty of free beaches.

Anyway, Tahoe is beautiful, that is no doubt... but we should all do our part to try to keep it as wild and natural as possible.  In my opinion, it has already been way too far over-developed.  If you go, try to get away from crowds; don't stay in a hotel, camp instead; and whatever you do, don't support those monstrosities in Nevada. 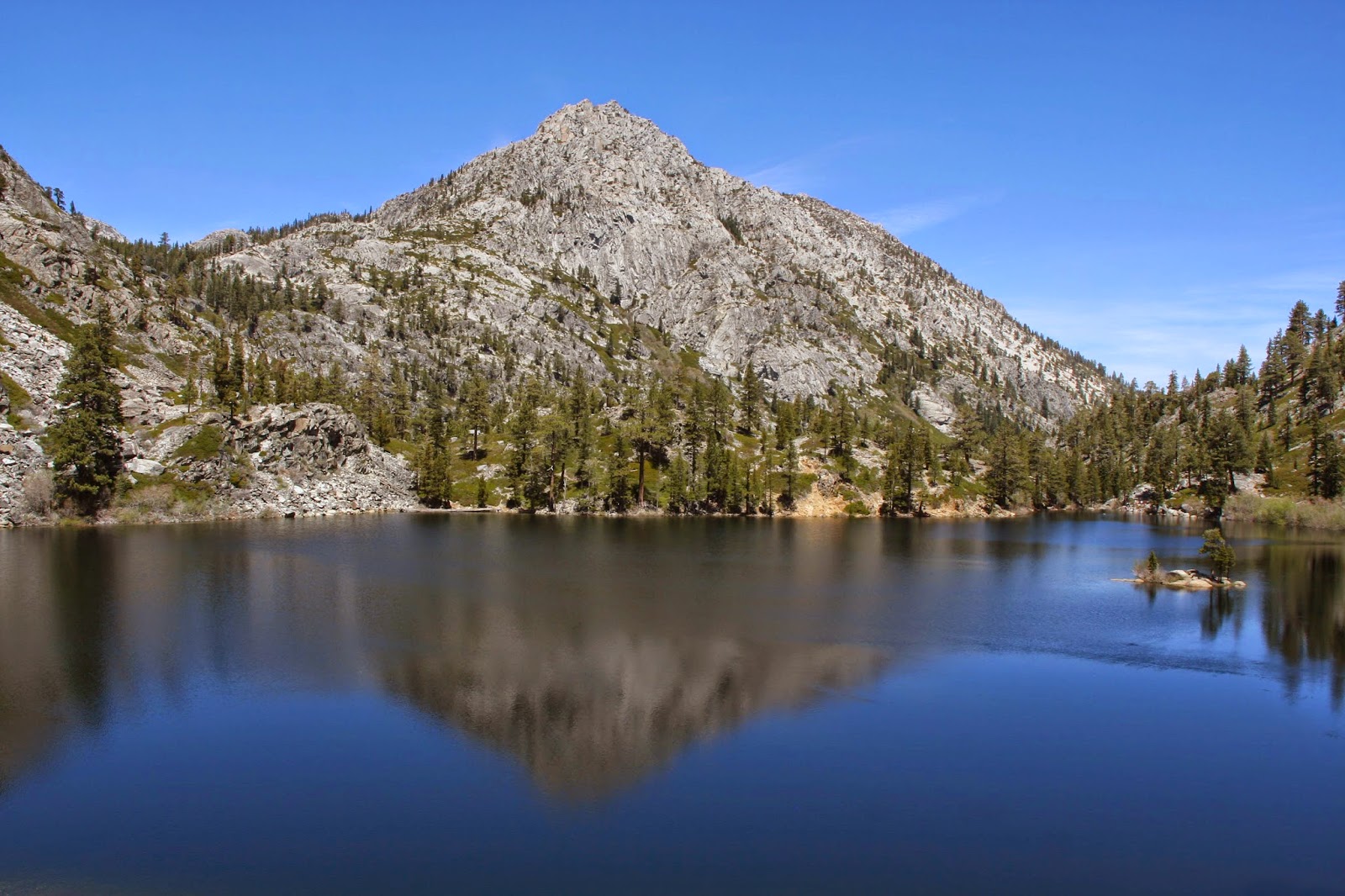 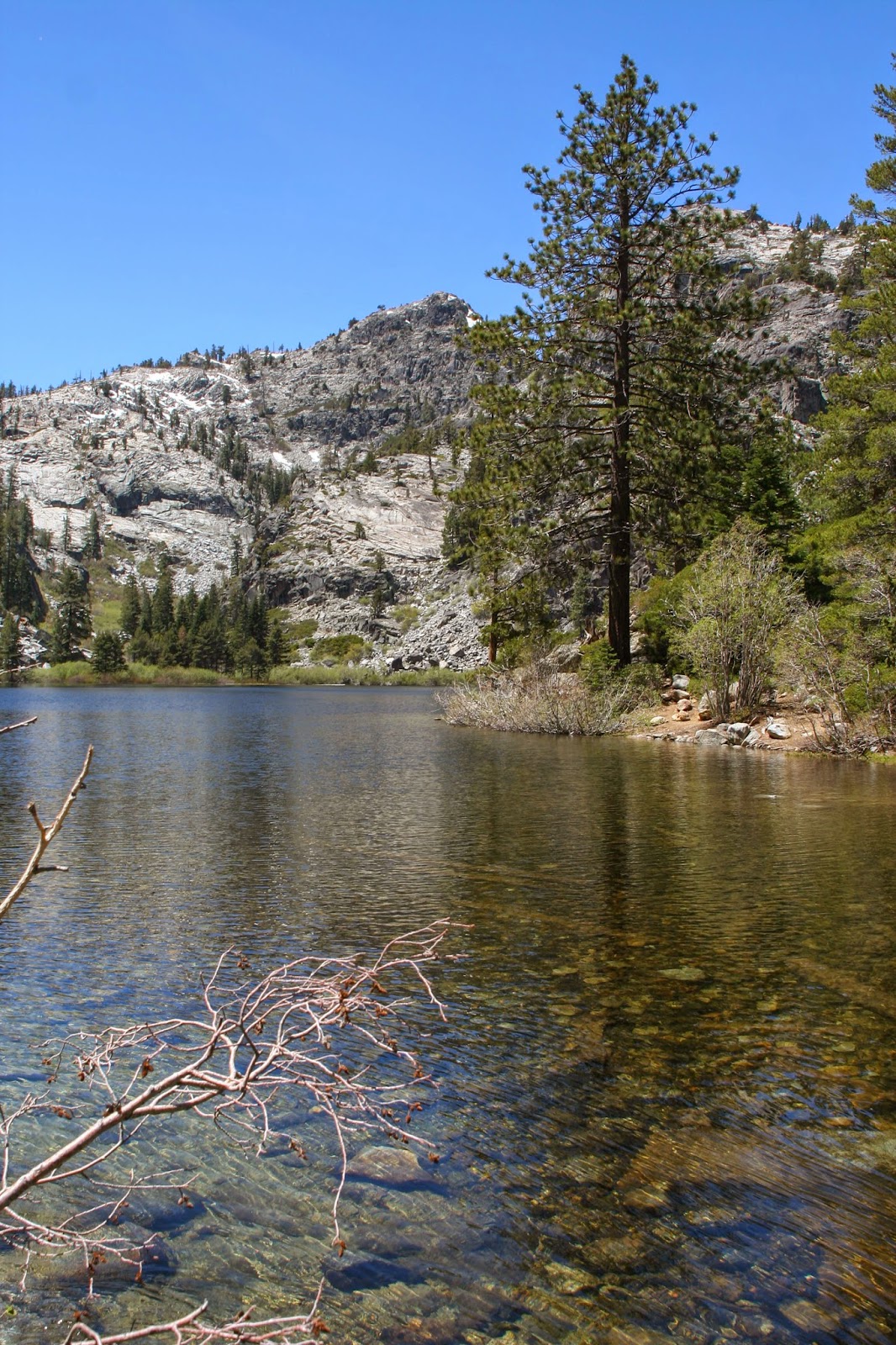 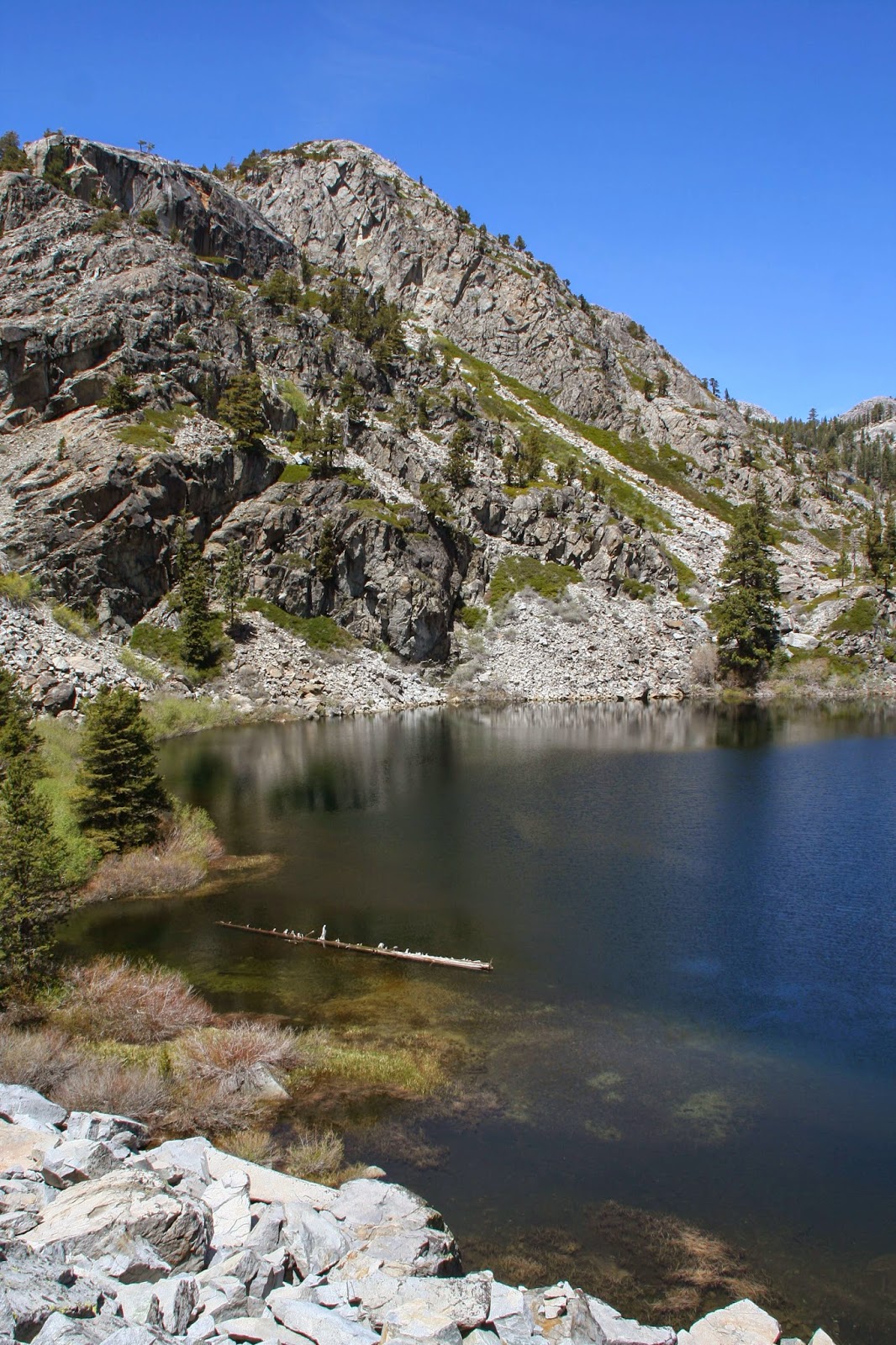 I mentioned above how you can take a hike from the trailhead at one of the Emerald Lake view points.  We took ~3/4 day to do just that.  Desolation Wilderness occupies a huge amount of territory south and west of Lake Tahoe.  It is US wilderness land, so it is open to any who want to hike, camp, horseback ride, and explore the mountainous wonderland.  However, due to it's proximity to tourist infested Tahoe, Desolation is supposedly the highest use wilderness area in the country.  Most people probably appreciate the wilderness in the same way we did (so I admit that I'm a bit of a hypocrite), via the Eagle Falls Trailhead.  The place is beautiful though and well worth it.  Just do everyone a favor and respect the place.  Get your permit, pack everything out that you pack in, and practice leave no trace.  I personally hope to get back up there and do a multi-day trip backpacking around the area. 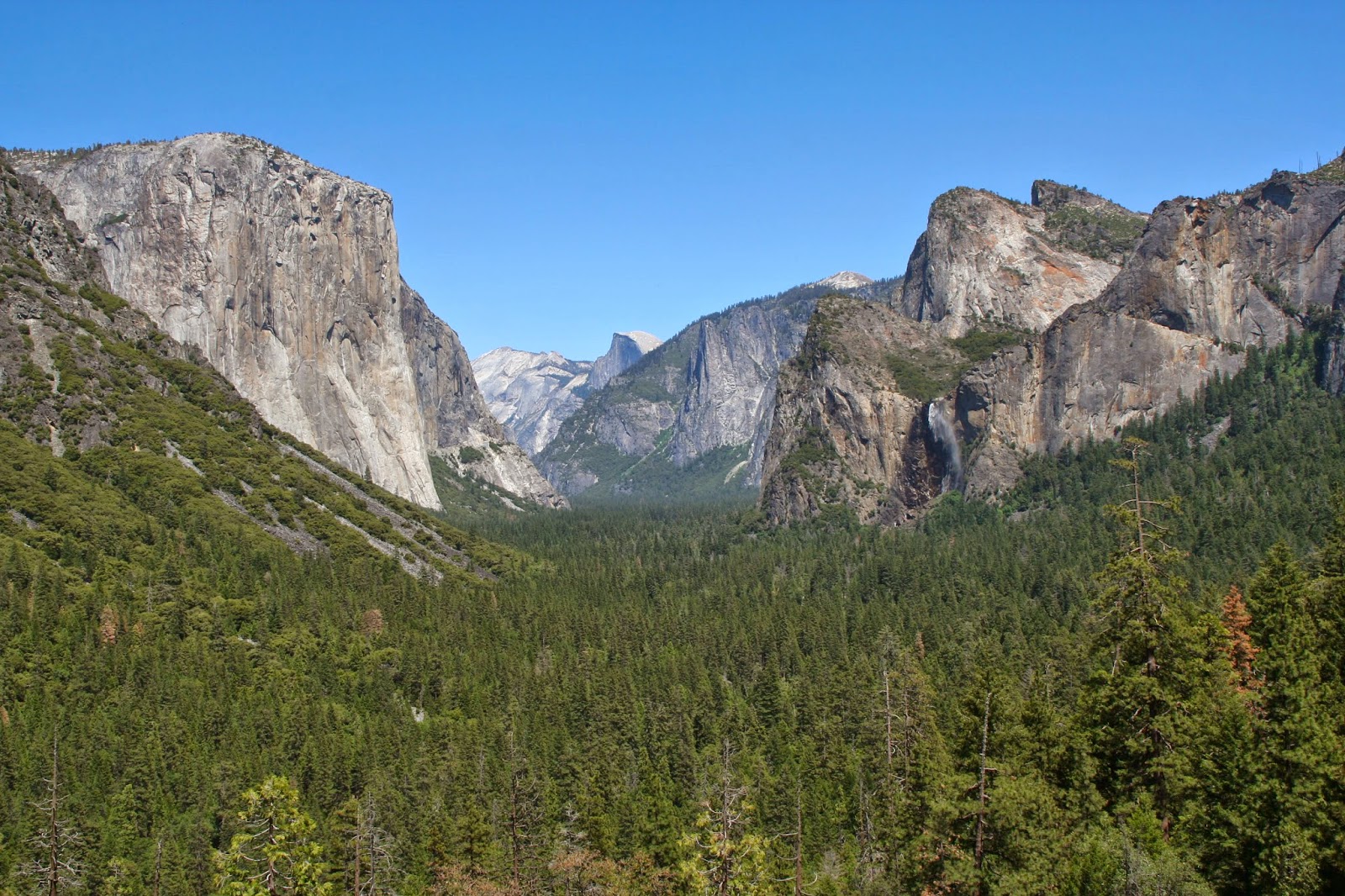 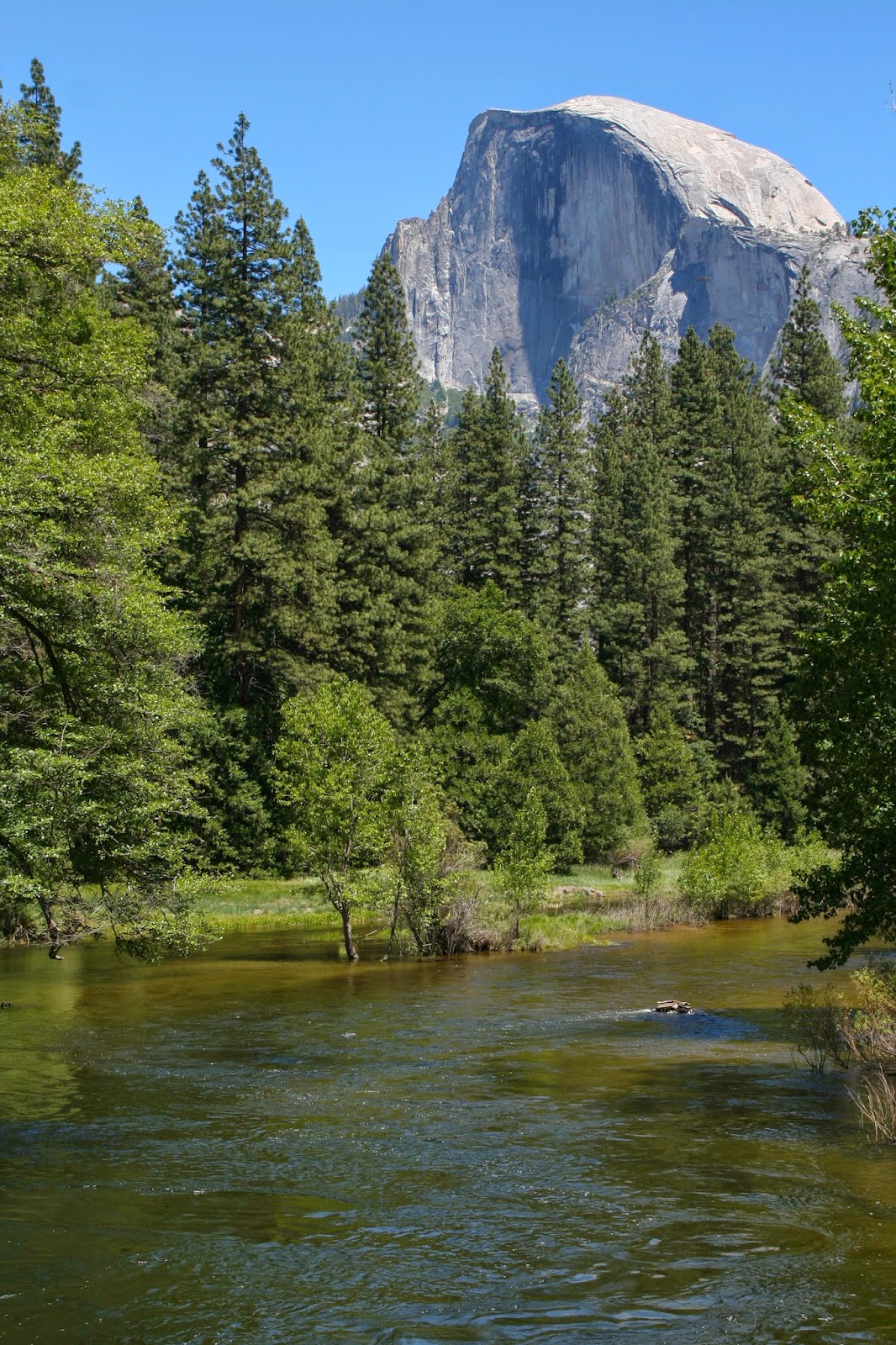 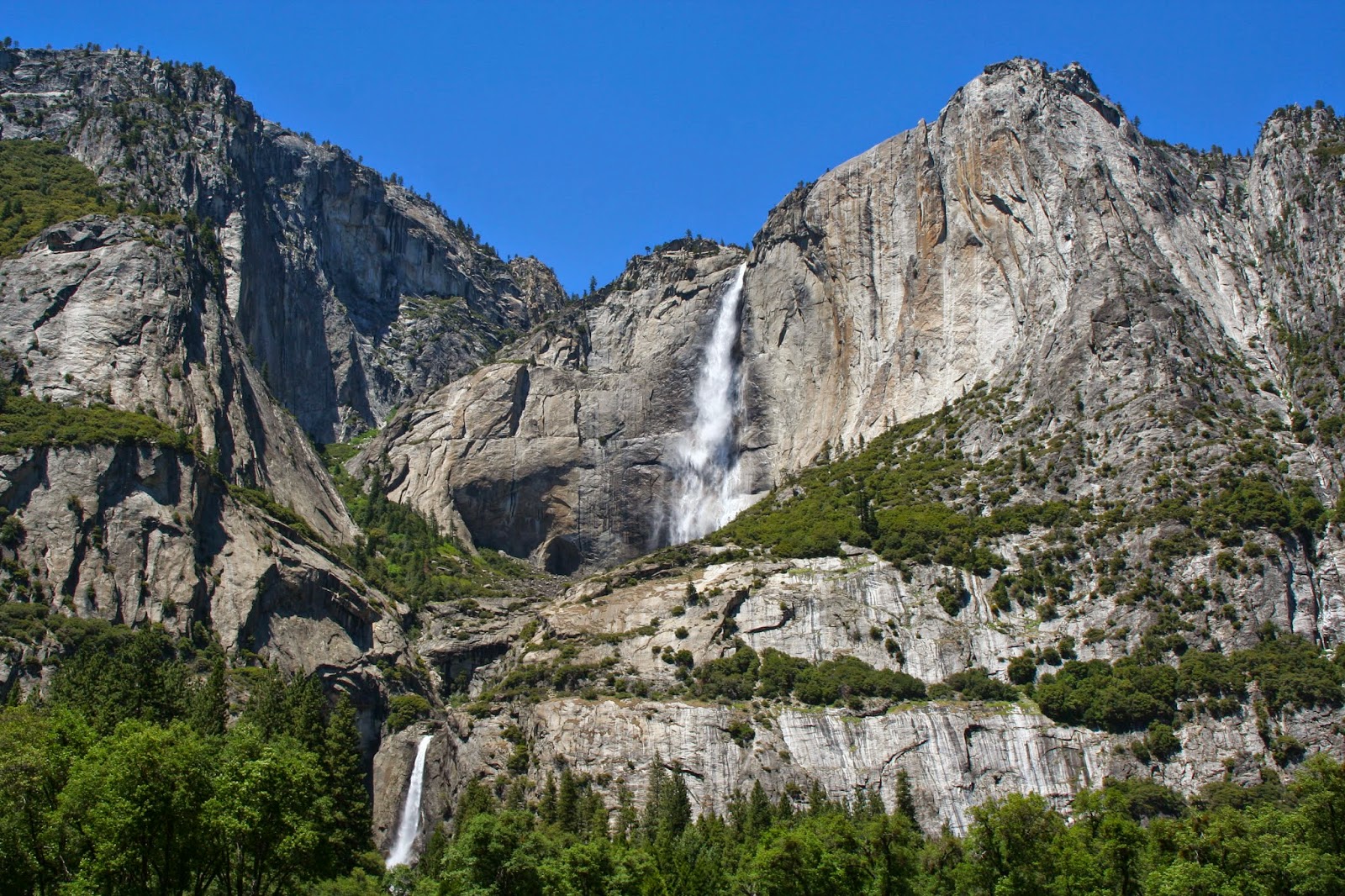 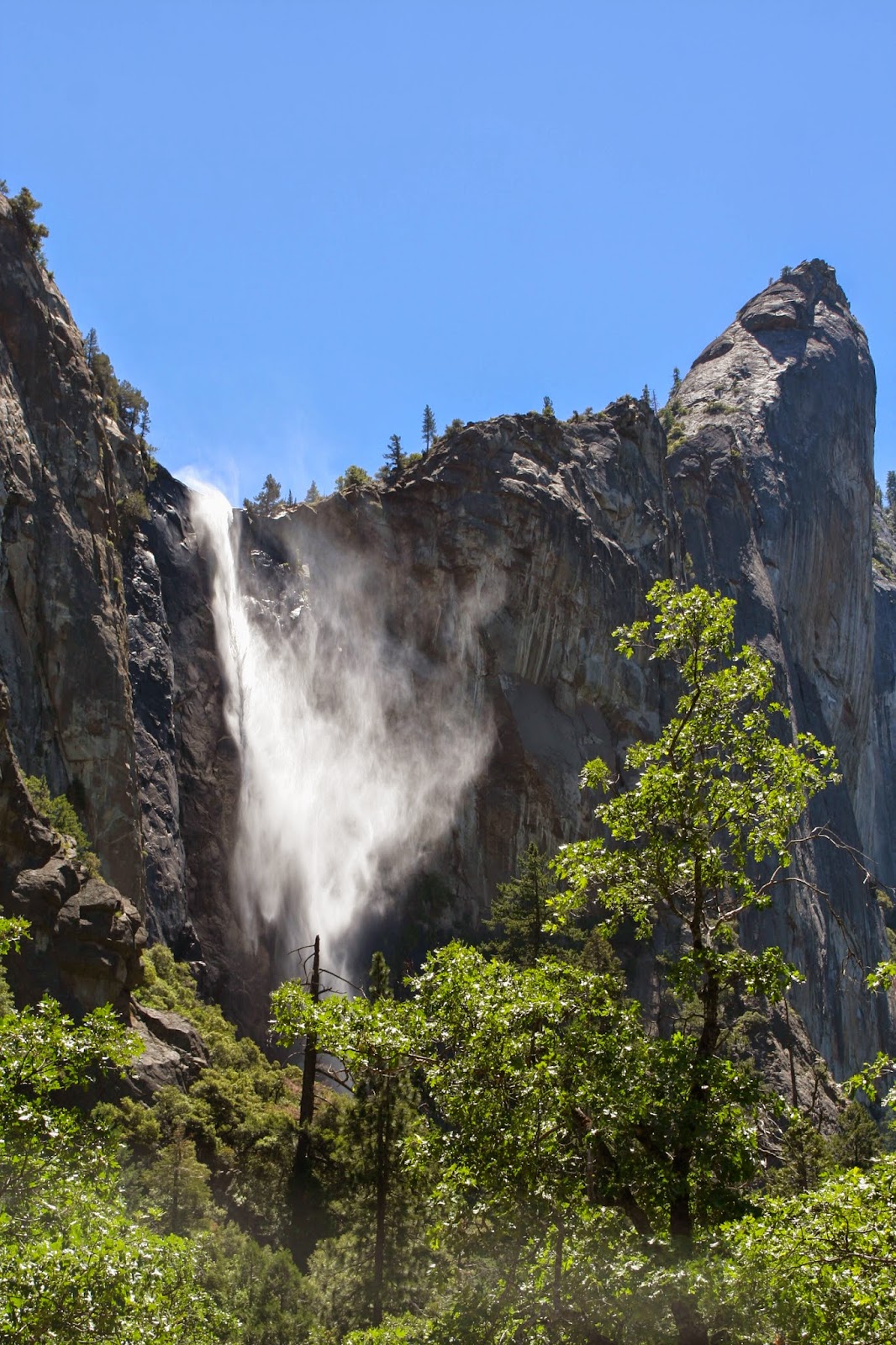 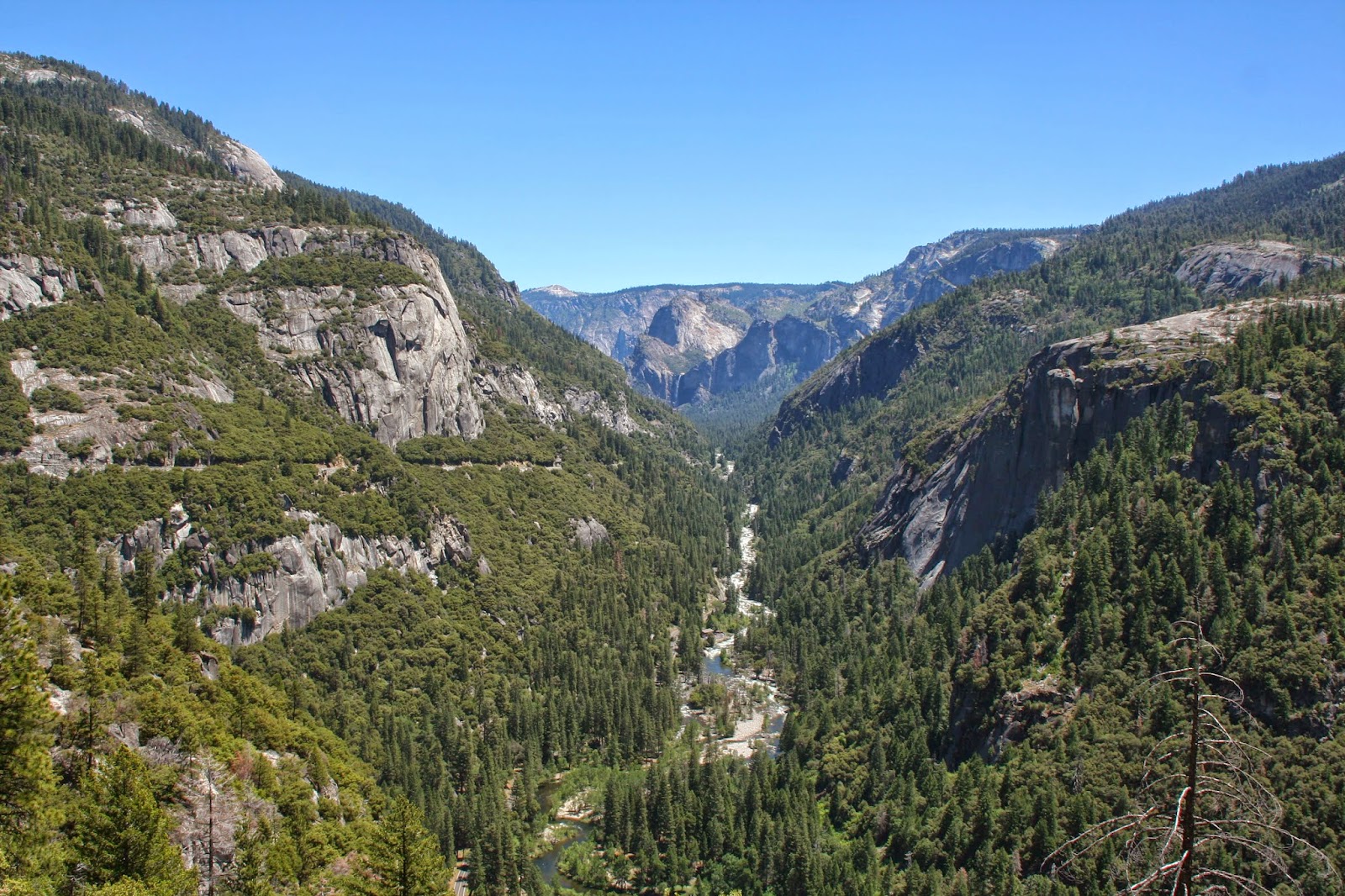 On the way home, we made one last big stop to see the world-famous Yosemite Valley.  I'd only seen the valley in winter before, so it was a new experience for me to see it in its full summer glory.  If there is some sentient creator of the Universe, then surely, Yosemite is a place it spent a bit more effort on.   This place is spectacular beyond words and pictures simply cannot do it justice.  The combination of giant trees, incomprehensibly high rock walls, ever-changing giant but wispy cascades, and crystal clear rivers burbling through it all are just like a place I hope to find myself in after death.

So, that's a little taste of a state that I now call home, and like I said, this road trip is a prime example of exactly why I love living here.  California is simply awesome.