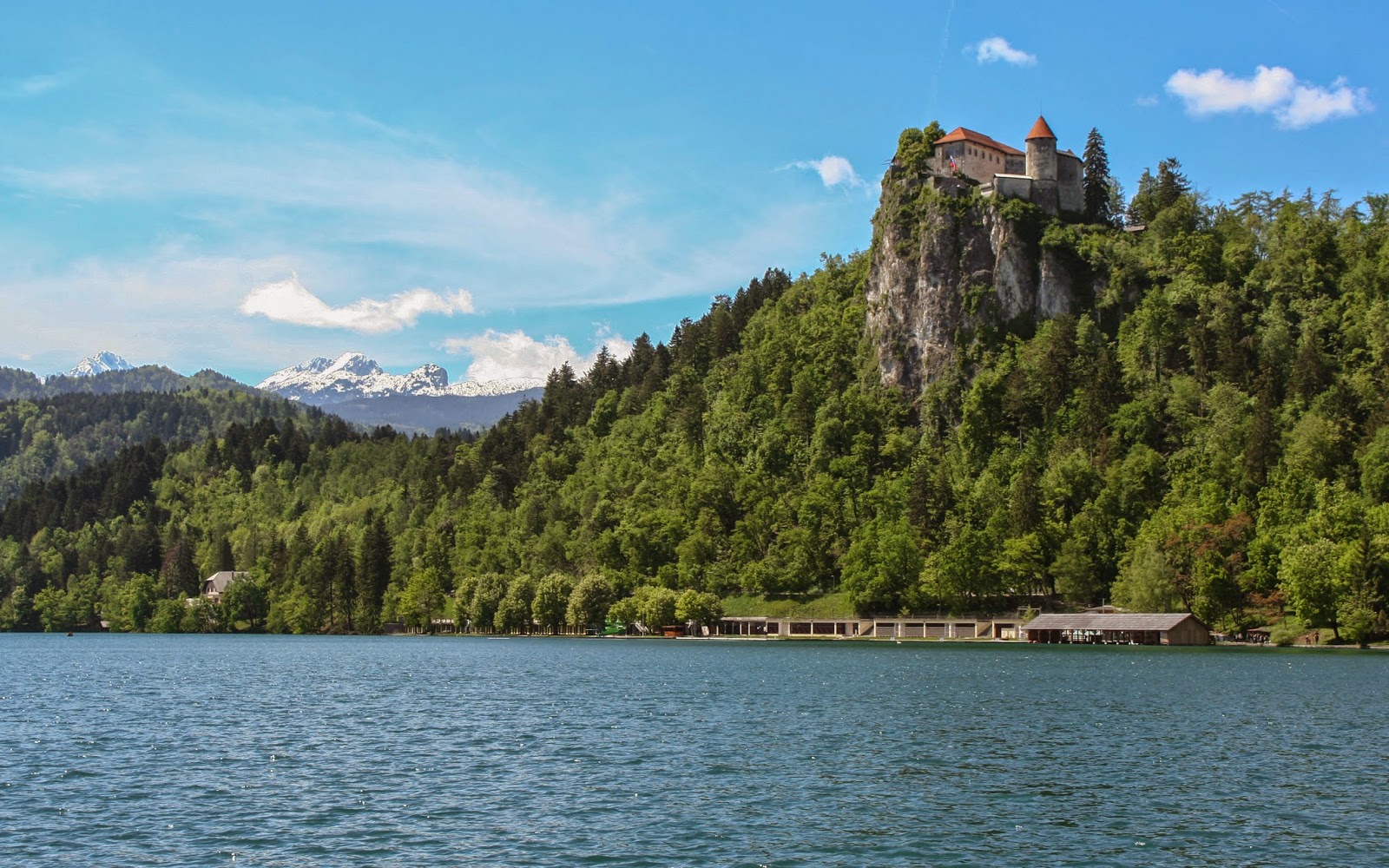 Now, into the mountains... like I said before, Slovenia is a land blessed with both sea and mountains.  Anyone who visits should do their best to experience both. 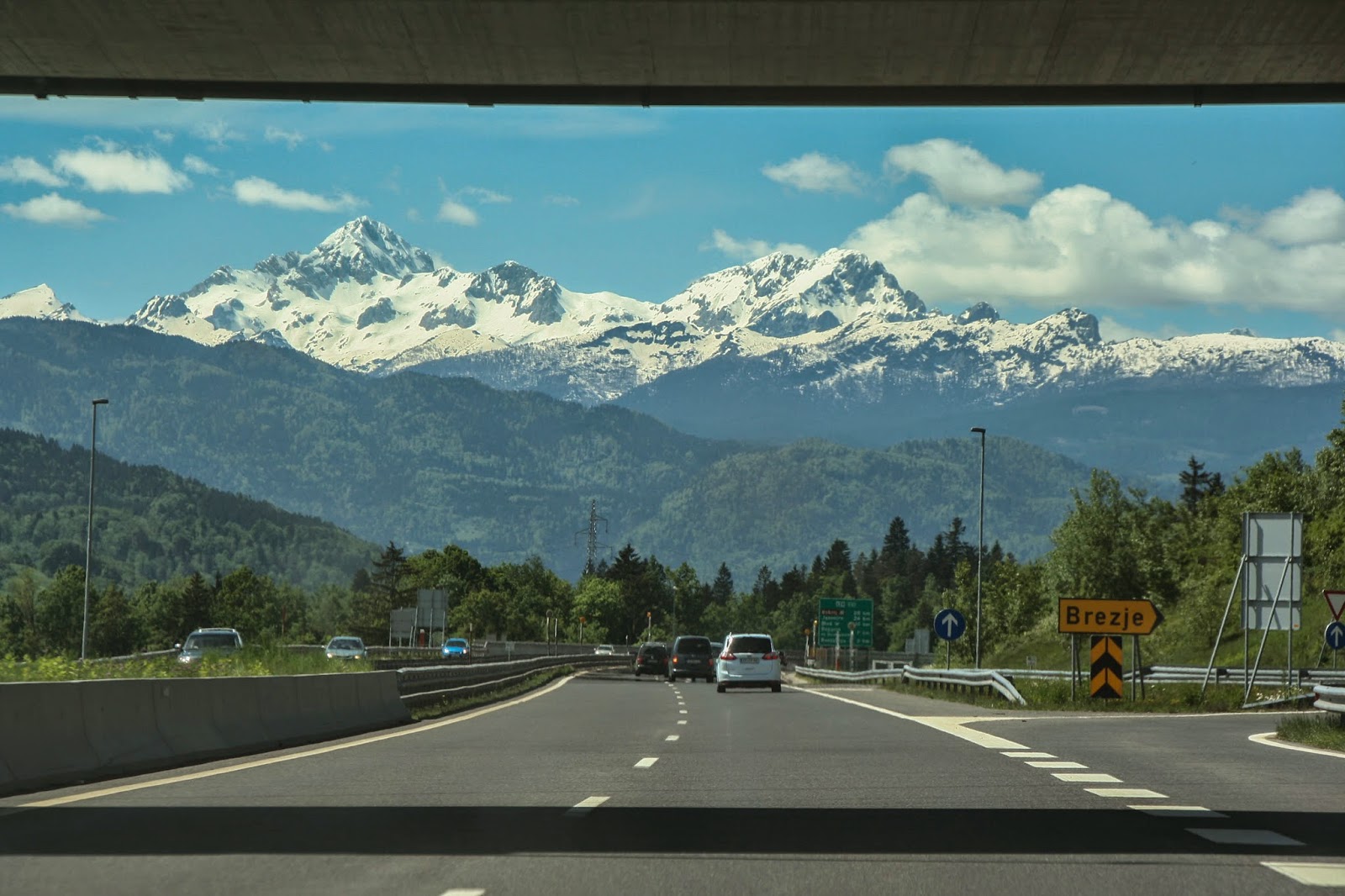 We made the drive from Piran to Lake Bled in only a few hours, and let me tell you, driving around Slovenia is rewarding... even on its major highways!  Just outside of Piran, you are treated to spectacular views down on the Adriatic, with the Alps in all their glory standing proudly against the horizon behind it.  Then, as you keep heading further north, the mountains come more and more into full detail, showcasing their grandeur unabashedly. 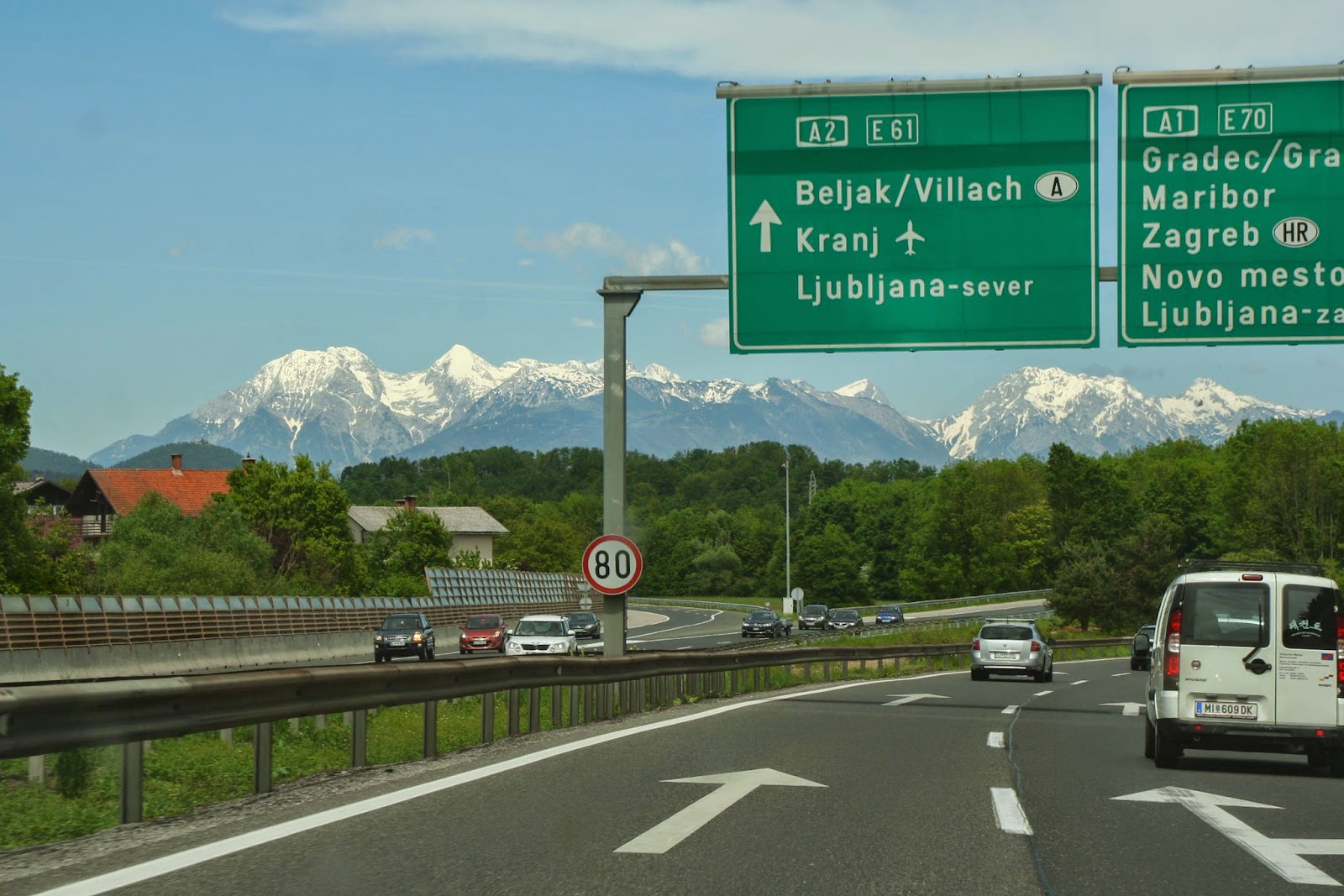 Passing by the capital, Ljubljana, the highway still has a glorious backdrop, and you'd never know the country's biggest city was anywhere nearby. 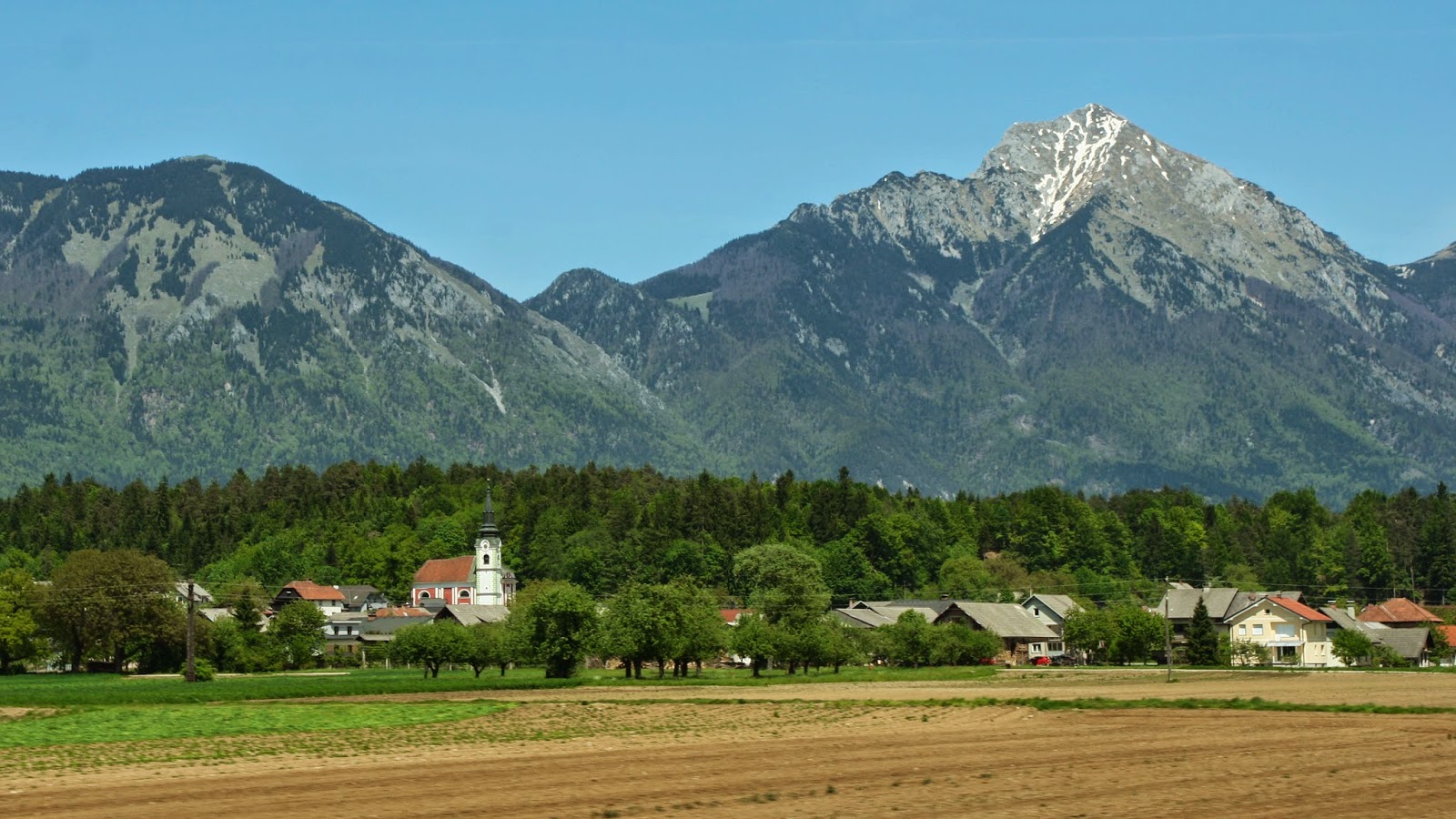 This is definition "fairytale land", as I describe so many parts of Europe so very often.  These perfect little churches and villages, in their pristine fielded and forested valleys, pass by under those spectacularly sculpted peaks. 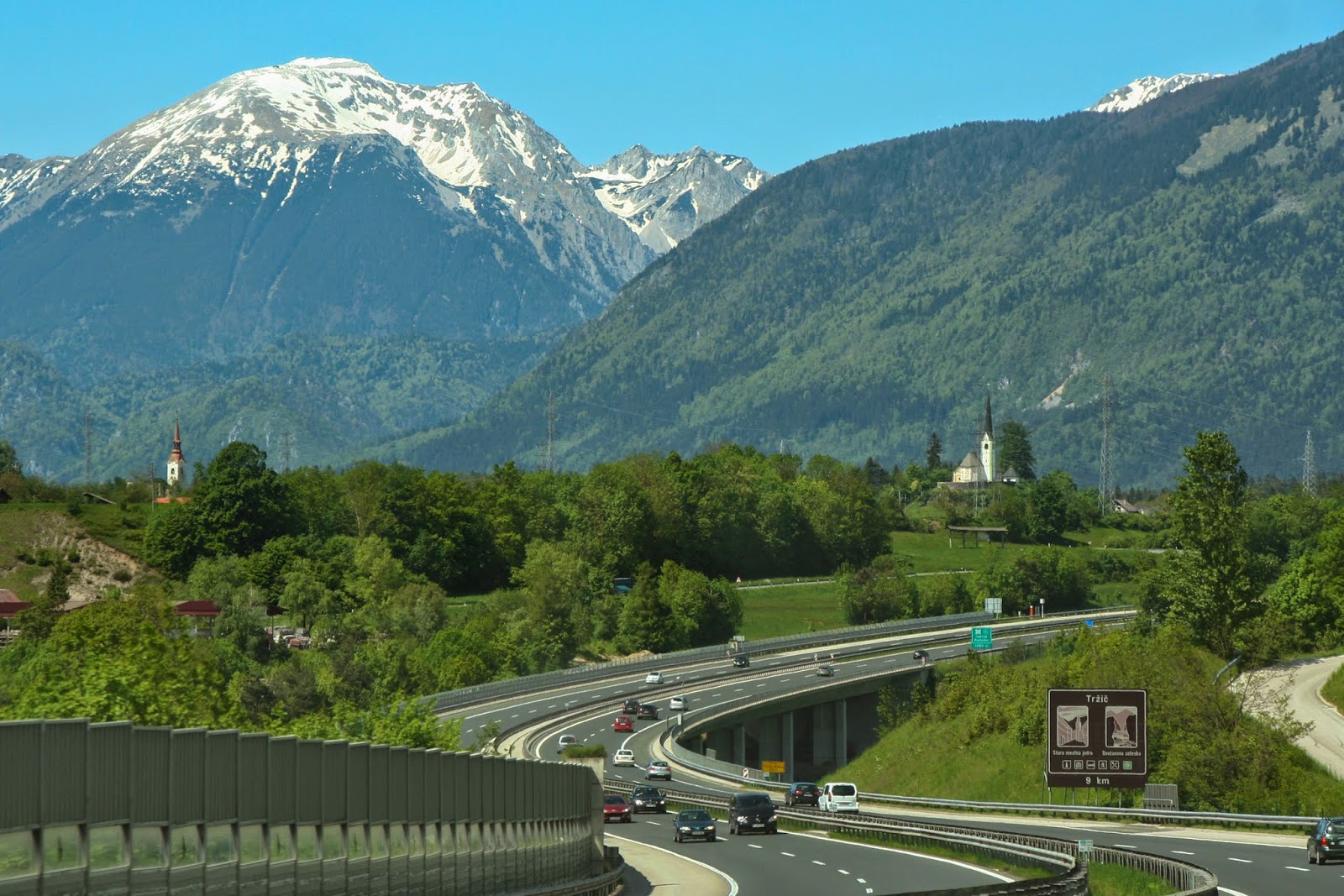 I can only imagine what this place is like in winter... it must be glorious.   It also must be a backcountry skiers snowy dream. 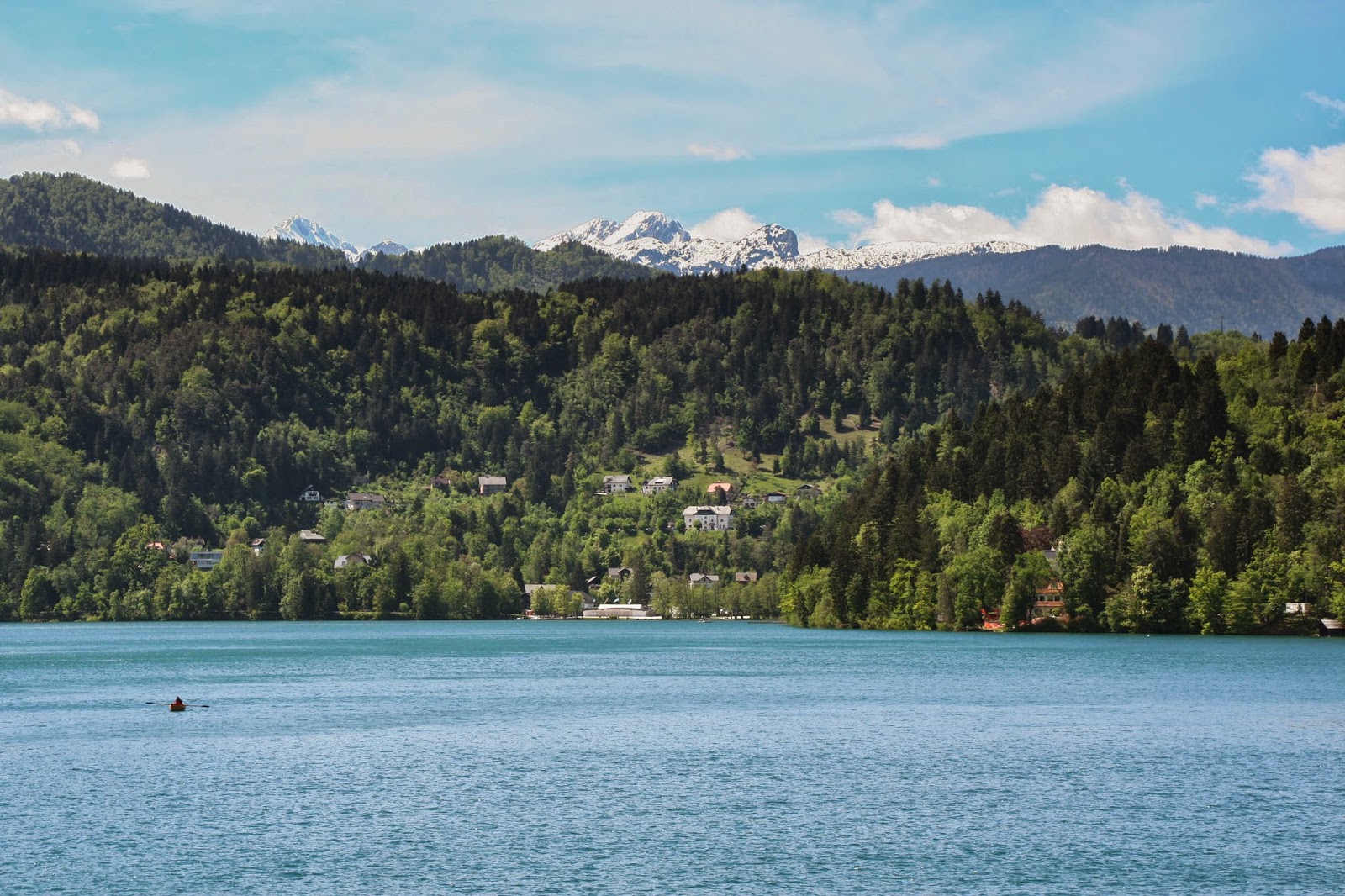 Just when you start to think you're about saturated with natural beauty, then you get to this place... and your whole baseline shifts.  Lake Bled is famous.  Tucked away in the Julian Alps, Bled has been a resort destination for a couple hundred years now.  During Soviet rule, it blew up and there has been much graceless tourist development along the shore around Bled town since.  Despite the hordes of (mostly Russian) tourists, and their infernal tour buses, the lake is still spectacular. 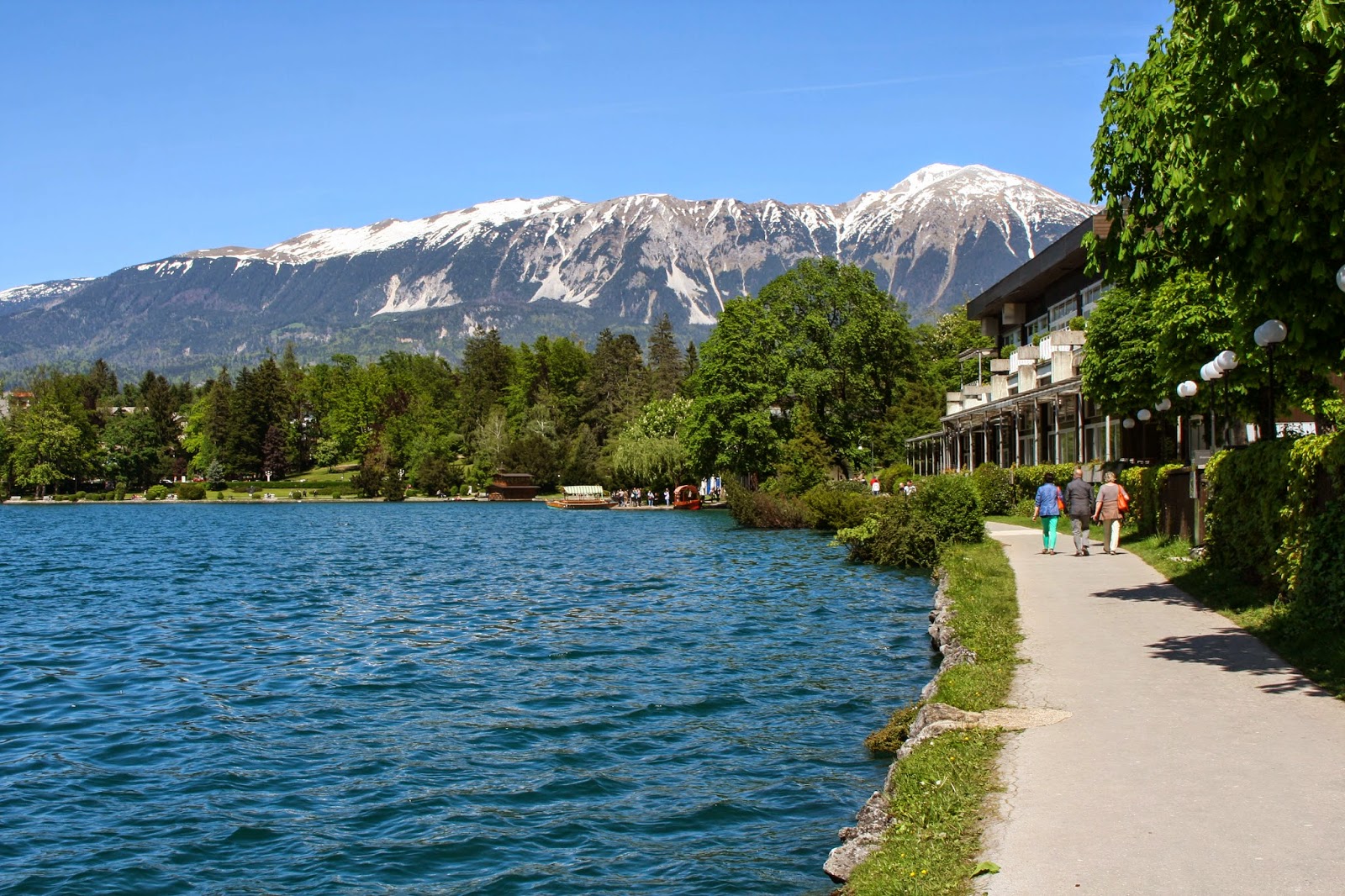 First of all, there is 360 degrees of mountainous backdrop.  There is also this pathway that circumnavigates the lake, letting you take in the views on a nice long stroll, walk, jog, or bike ride around it.  The lake is really only very developed at its eastern edge, where the resort town of Bled lies. 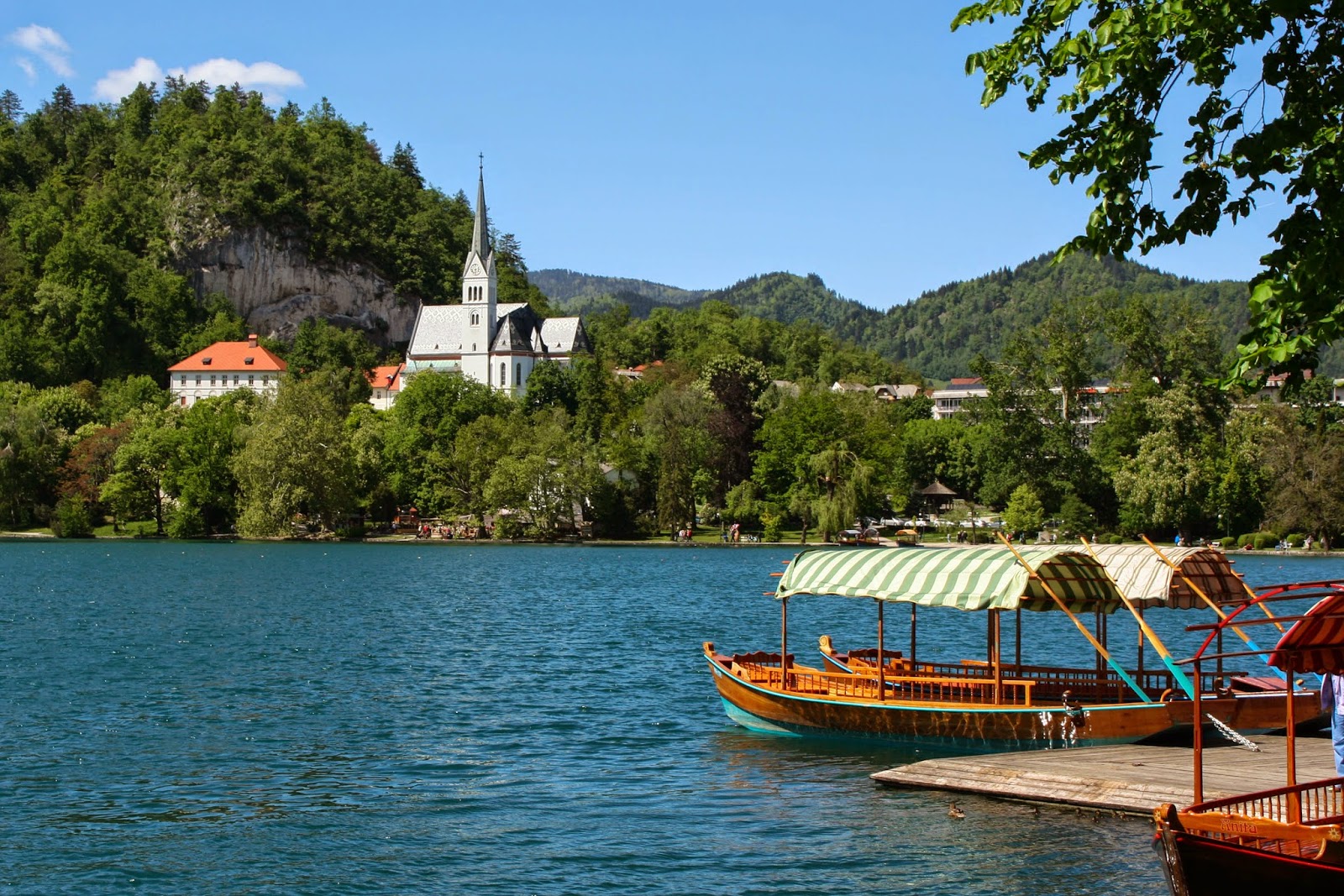 Oh look, and there is this lovely church adding to the scenery... 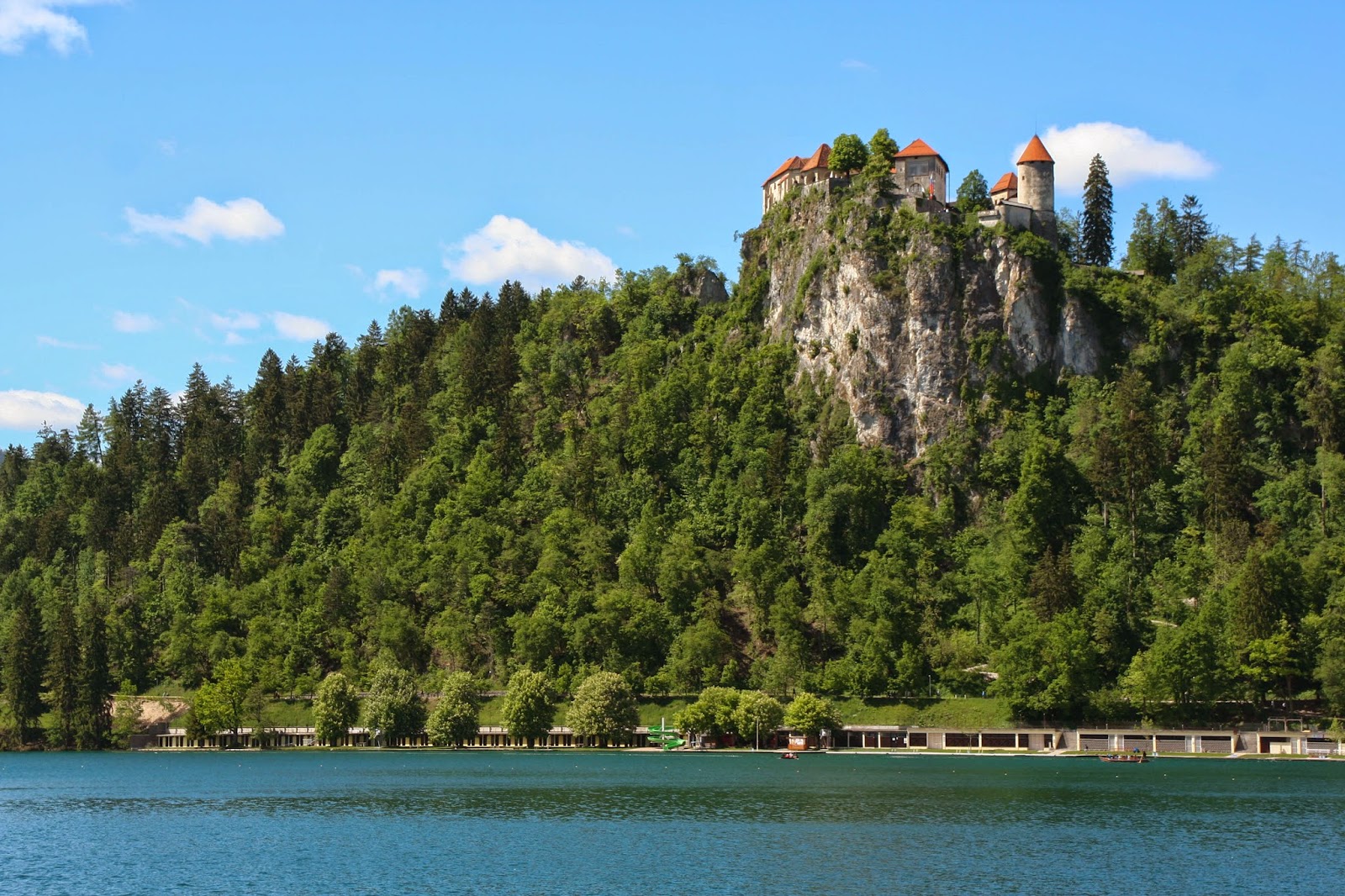 Oh, and then there is that picture perfect castle on the rocky outcrop on the hill overlooking the lake.  Seriously... can you say "fairytale land?" 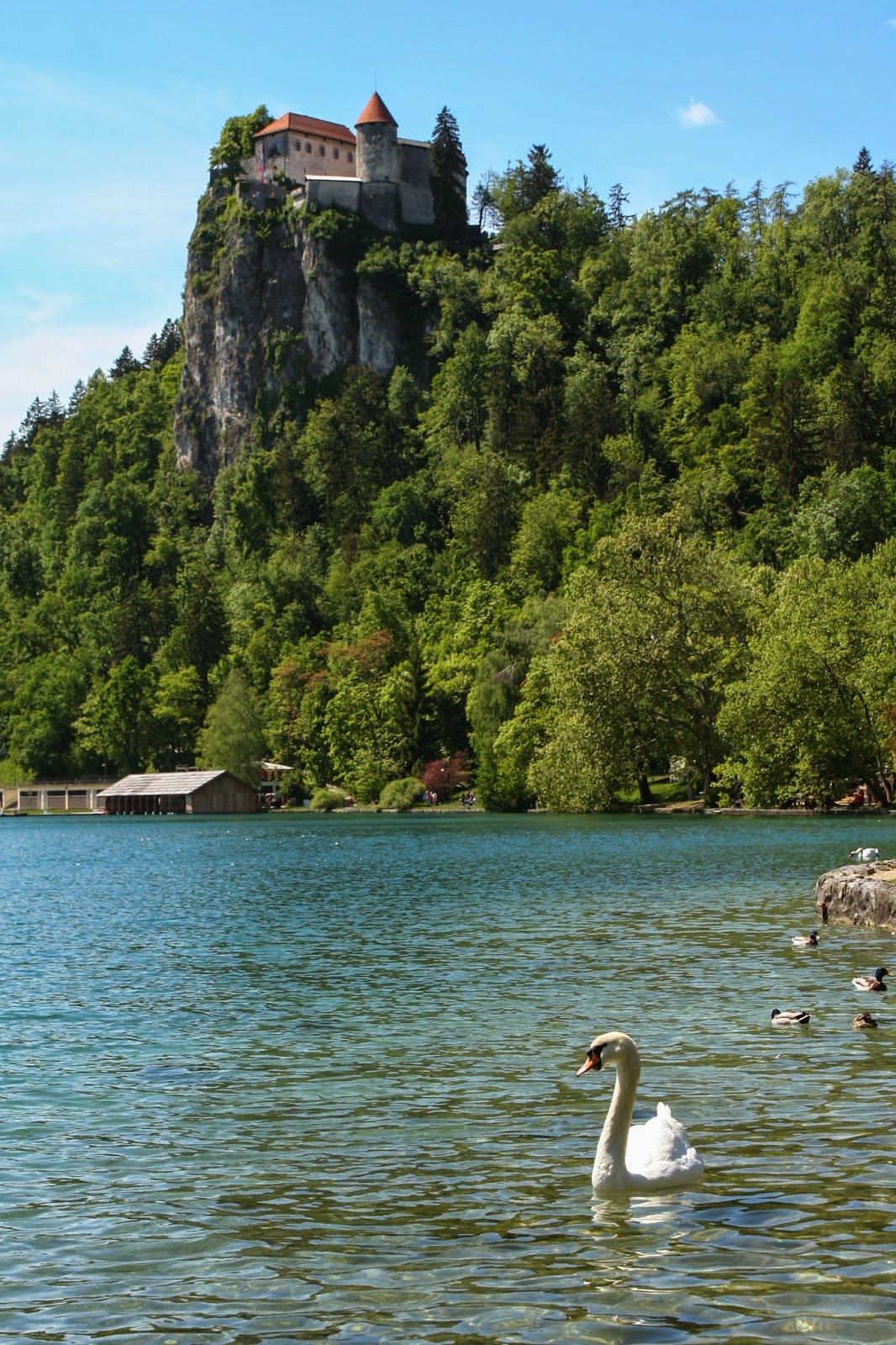 Add to that the swans and pretty little ducks swimming in the lake... 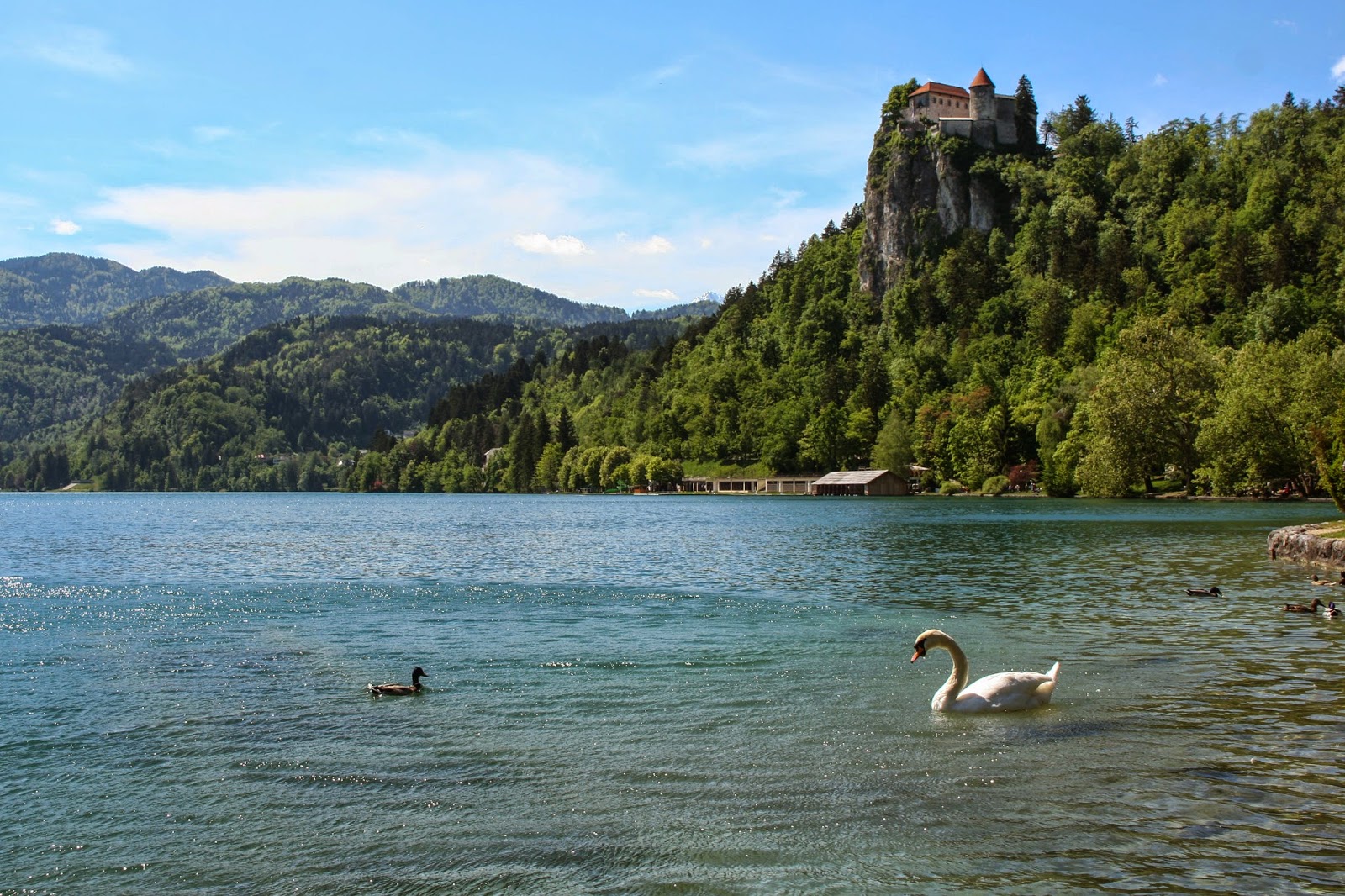 And more glorious mountain backdrops with the castle, a swan, and ducks... ducks! 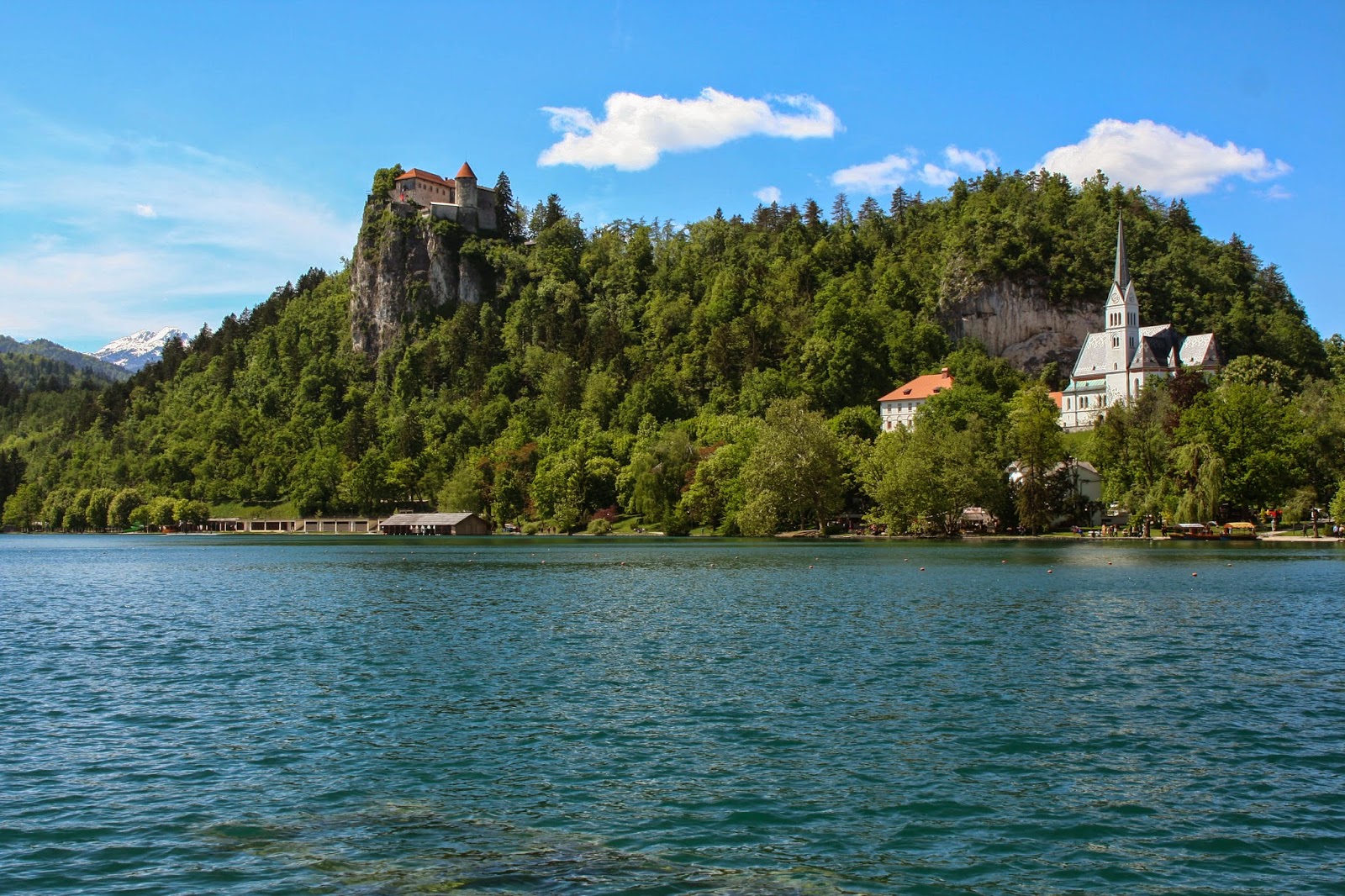 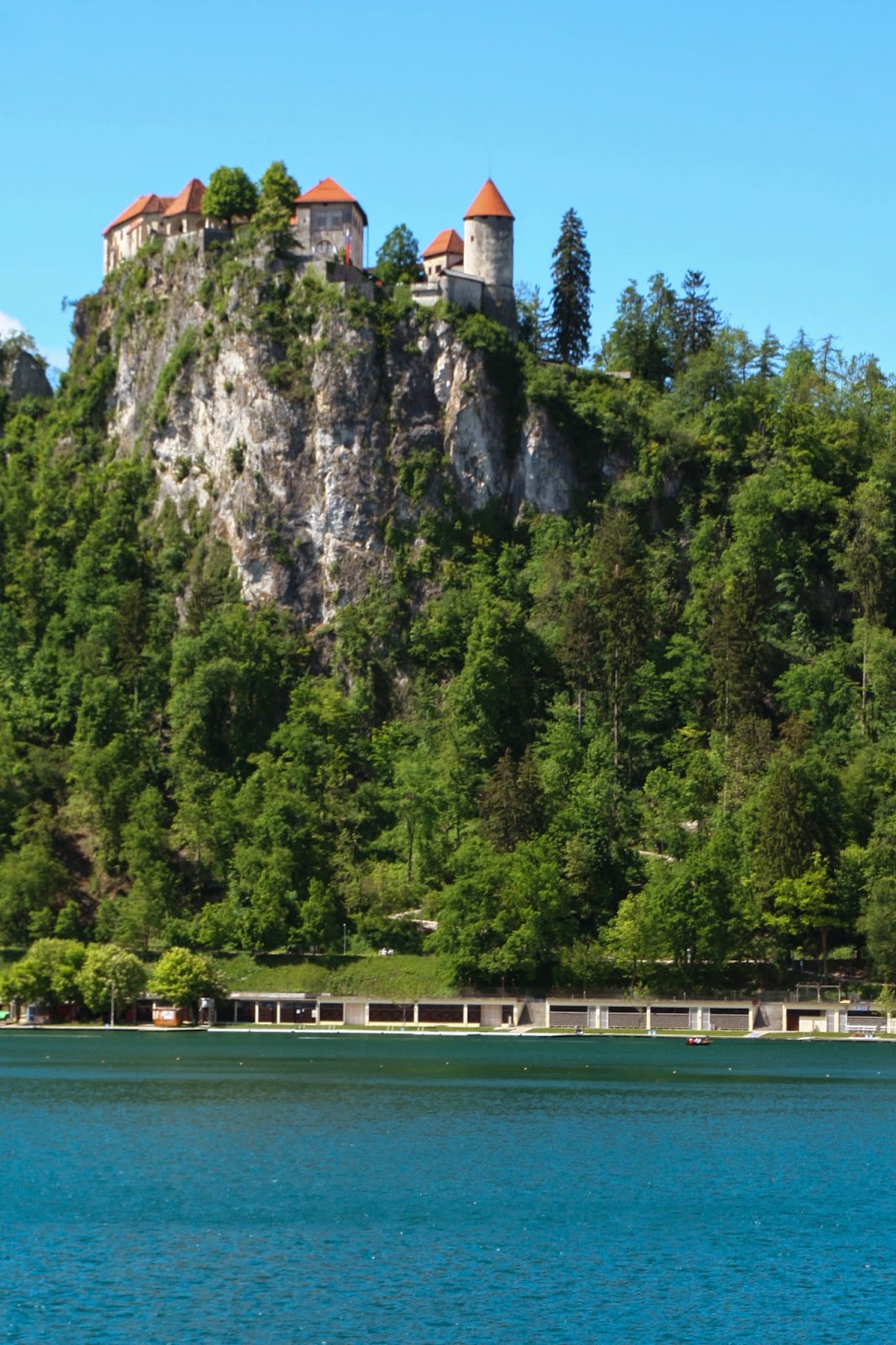 Despite the hordes of rude tourists, this isn't Disneyland.  Bled Castle is legitimate... it is a classic medieval castle, and the oldest part has been there for more than 1000 years.   Now the castle is a major tourist destination, one of the most popular in the entire country, and one of Lake Bled's star showpieces. 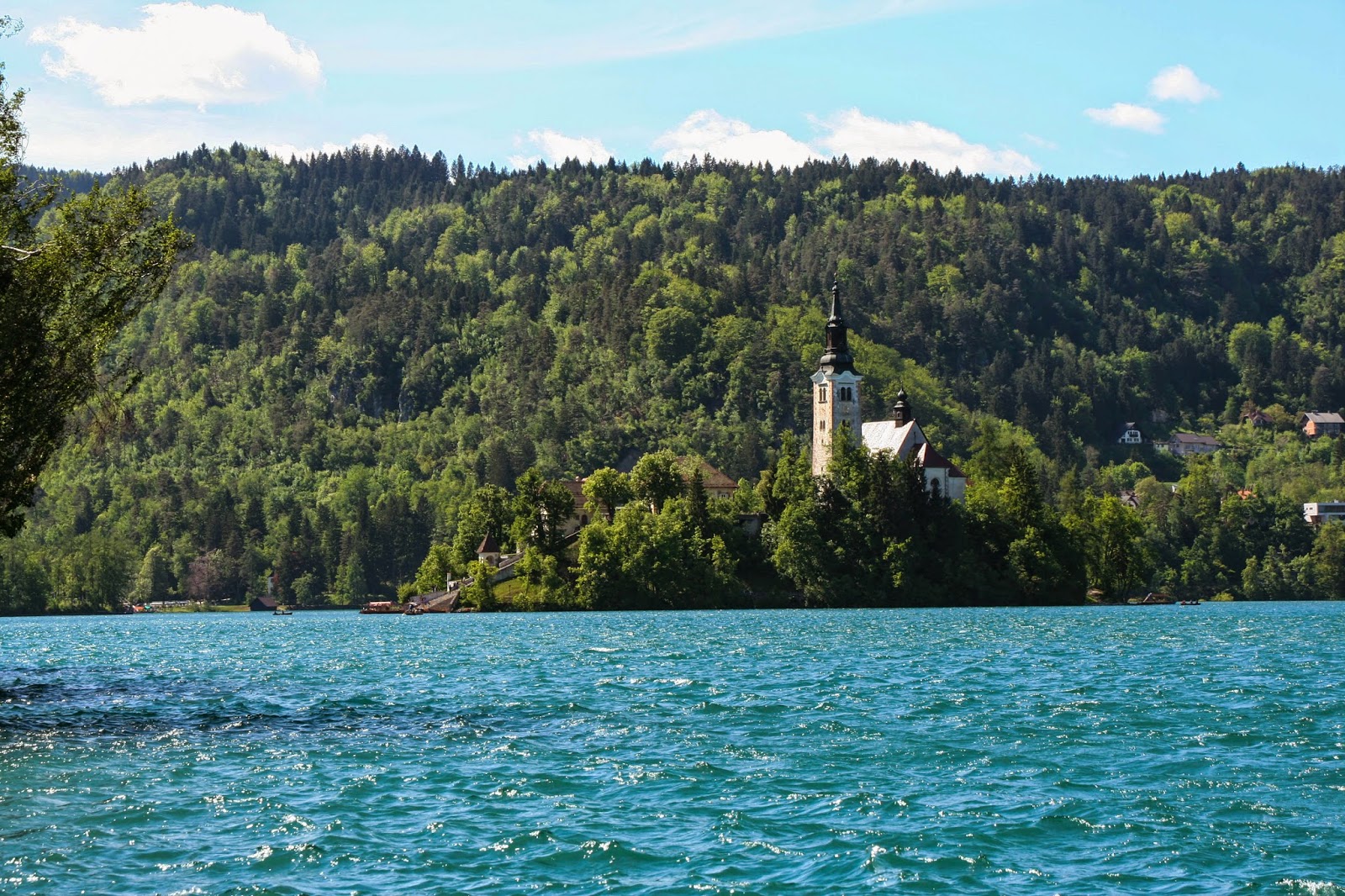 Lake Bled's other main draw is this nice little island out on the lake with its pilgrimage church.  Unfortunately, I was never in a good spot to get a picture showcasing the island surrounded by water... it always blended into the hills along the shore behind it.  However, it is indeed an island, and there are some great places to view it on the western side of the lake, as any google image search will confirm.  Another popular tourist activity is to take a boat out to the island and visit the church and other buildings on the tiny dot of land. 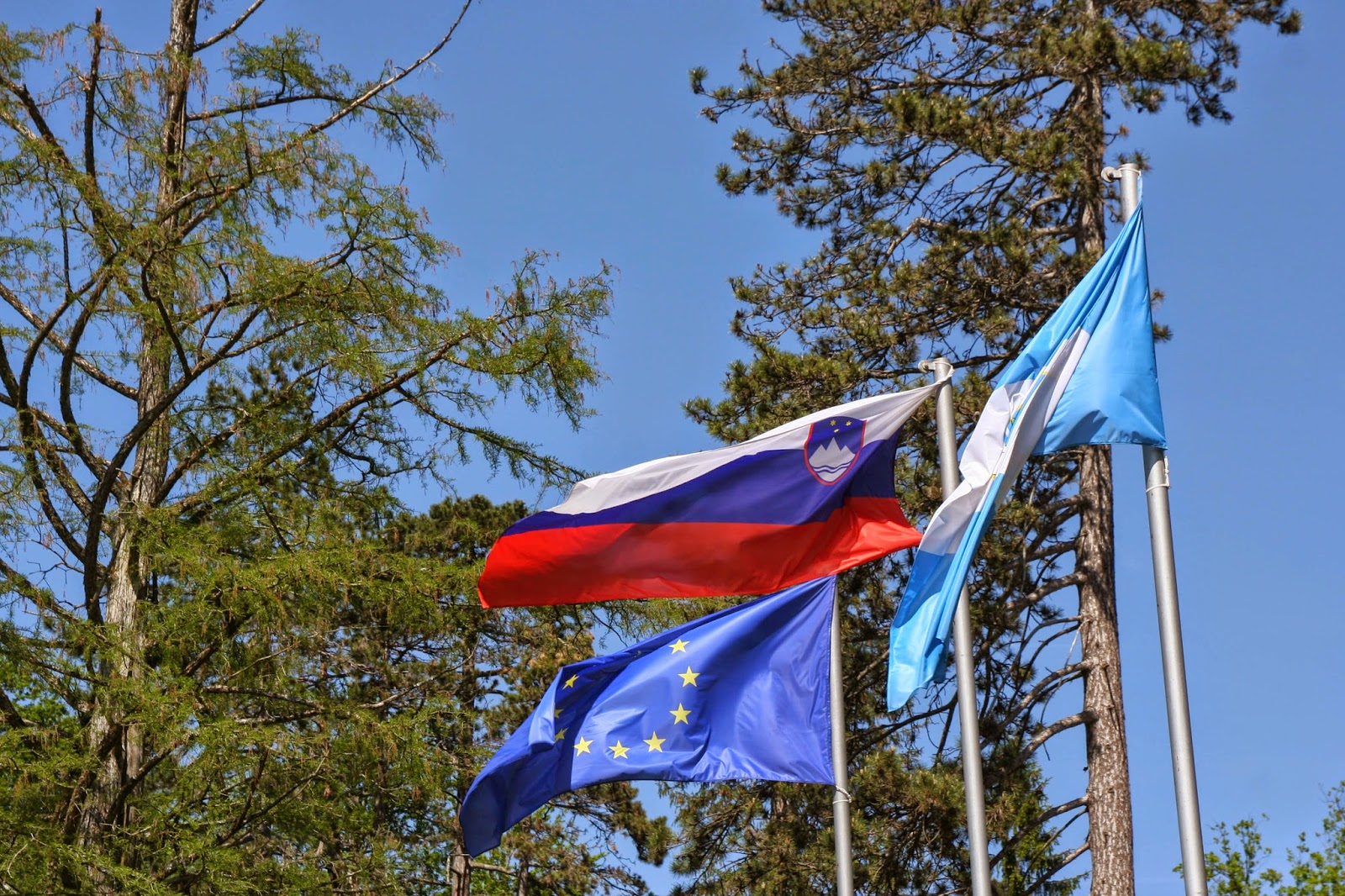 Slovenians are proud of their mountains and water... just take a look at the crest on the national flag.  Mount Triglav stands in the center, representing strength and masculinity.  The wavy lines below represent Slovenia's lakes, rivers, and sea for fluidity and femininity.  The stars supposedly represent democracy.  The red, blue, and white on the flag are the pan-Slavic tricolor, popular in one form or another on many Slavic national flags, such as Croatia, Serbia, Russia, Slovakia, and the Czech Republic.  Slovenia is a member of both the European Union and NATO.  It is a shining example of the benefits of the EU for productive but small member states, and my friends and I were all tremendously impressed by the excellent level of infrastructure and general quality throughout Slovenia.  The country is apparently just as politically and socially rich as it is naturally. 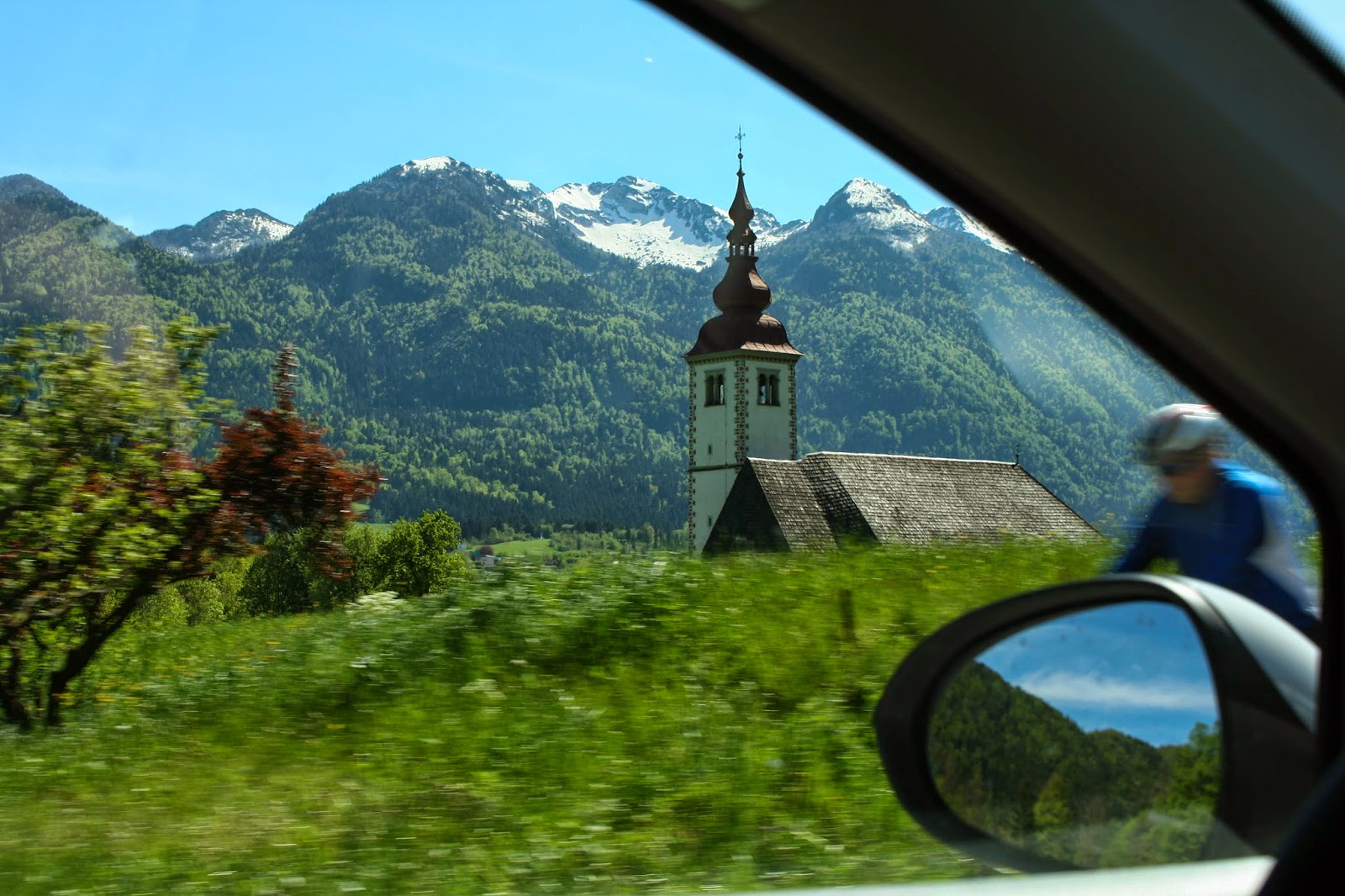 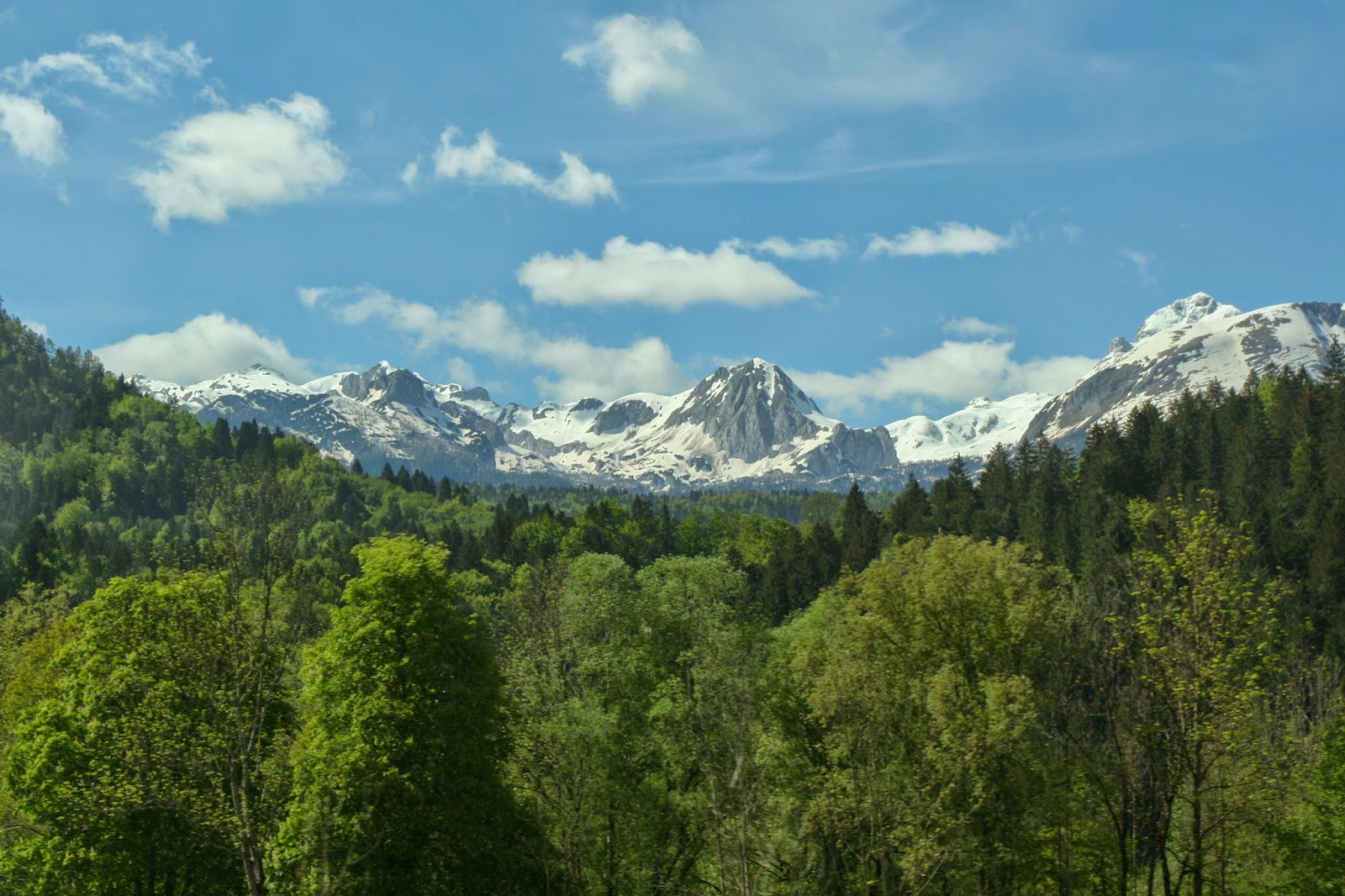 As you climb higher, the mountain scenery manages to get even more magnificent.  The high Julian Alps here are the highest mountains in the country.  This area, Triglavski, is protected as Slovenia's only national park.  I hope to return there again to do some hiking in those mountains... 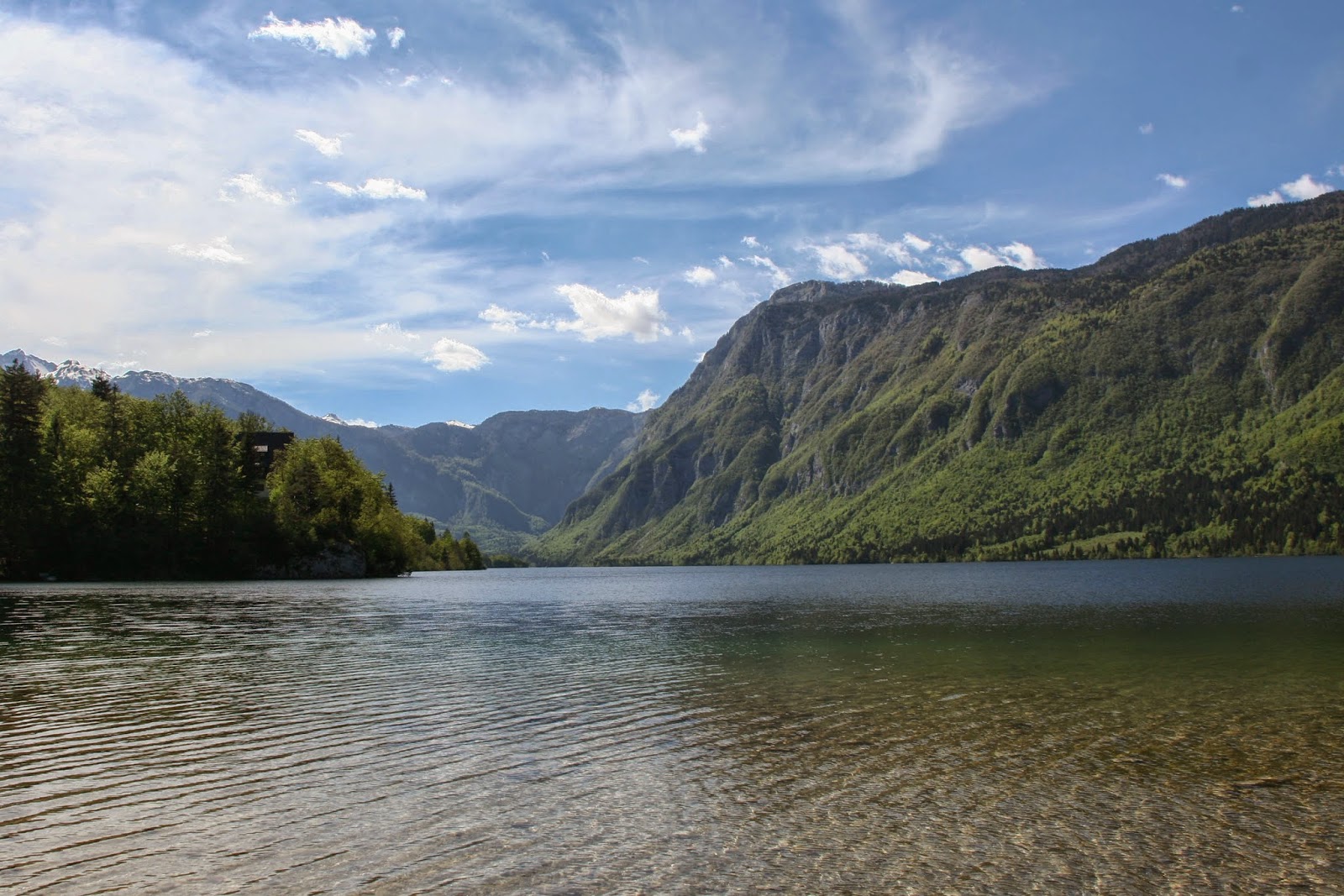 And then you get here... Lake Bohinj: deep, secluded, and serene; this is my kind of lake.  Bohinj stands in stark contrast to Lake Bled.  Where Bled feels bright, small, and approachable, Bohinj feels shrouded, large, and mysterious.  I loved it instantly. 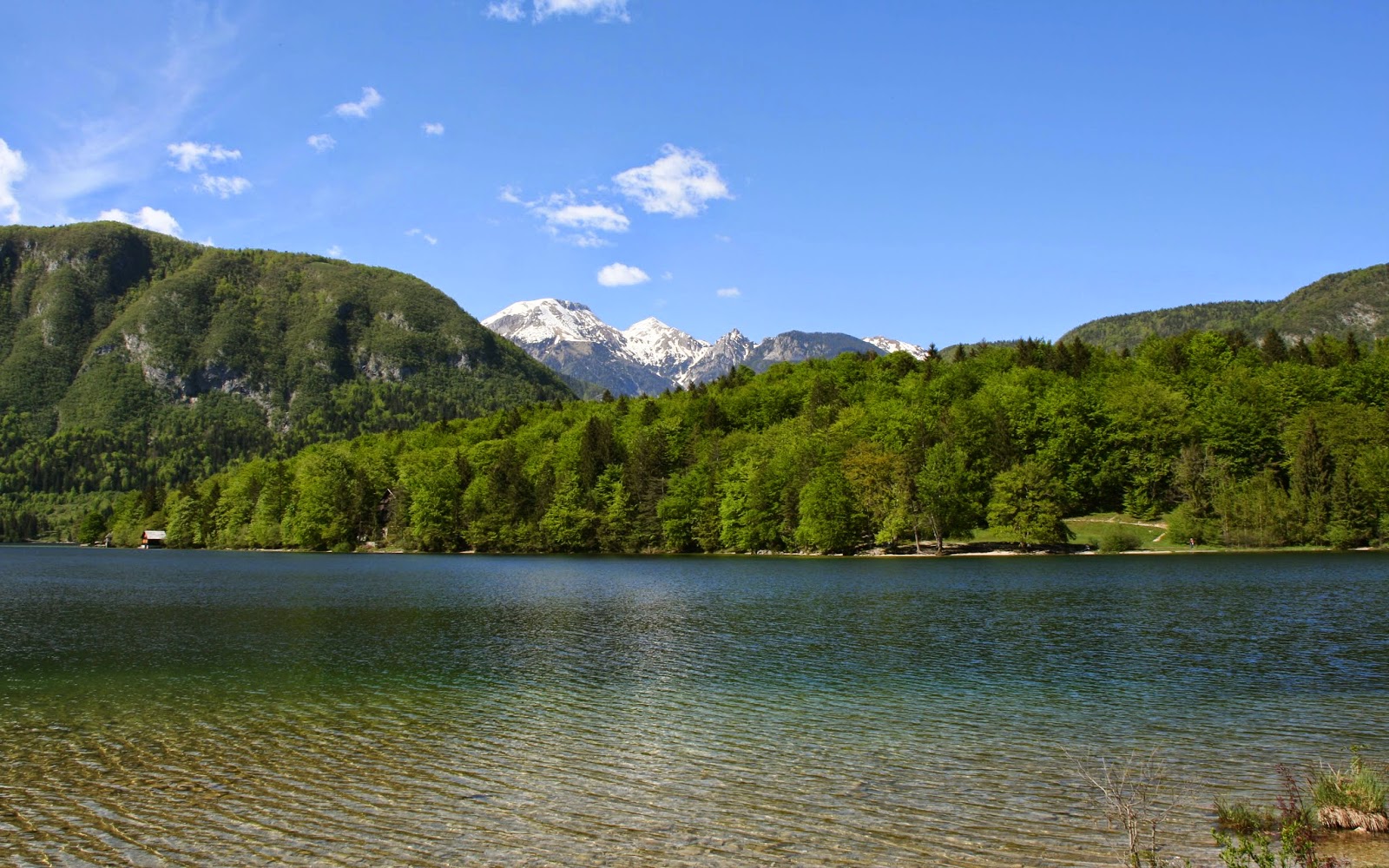 The fresh, cold mountain water is perfectly crisp and clear. 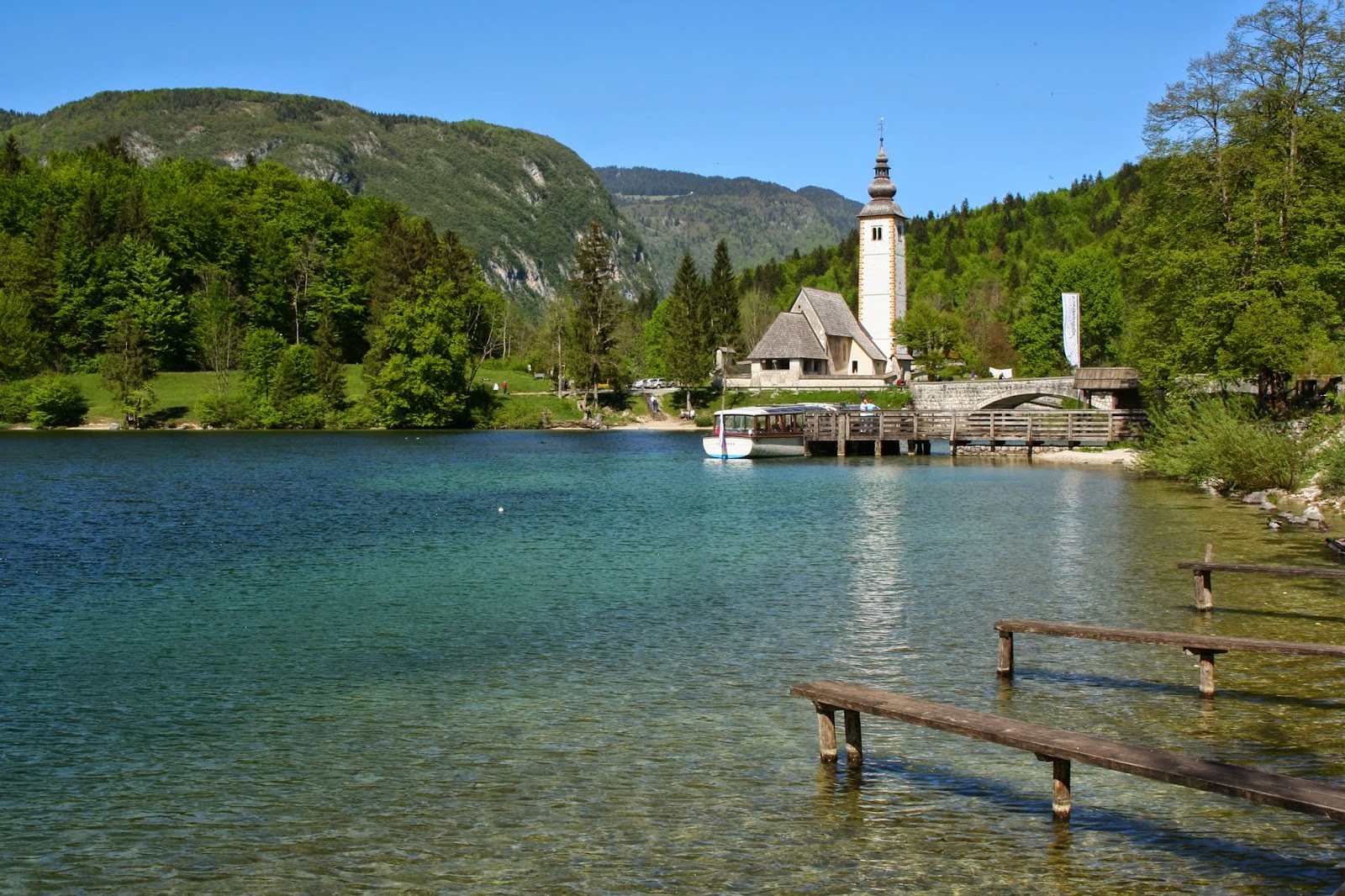 Fortunately, the lake sits within the national park boundary and has thus been spared from most human development along its shores.  It also has its own beautiful old church though and a few small buildings along the shore.  Compared to Bled though, its shoreline is very natural. 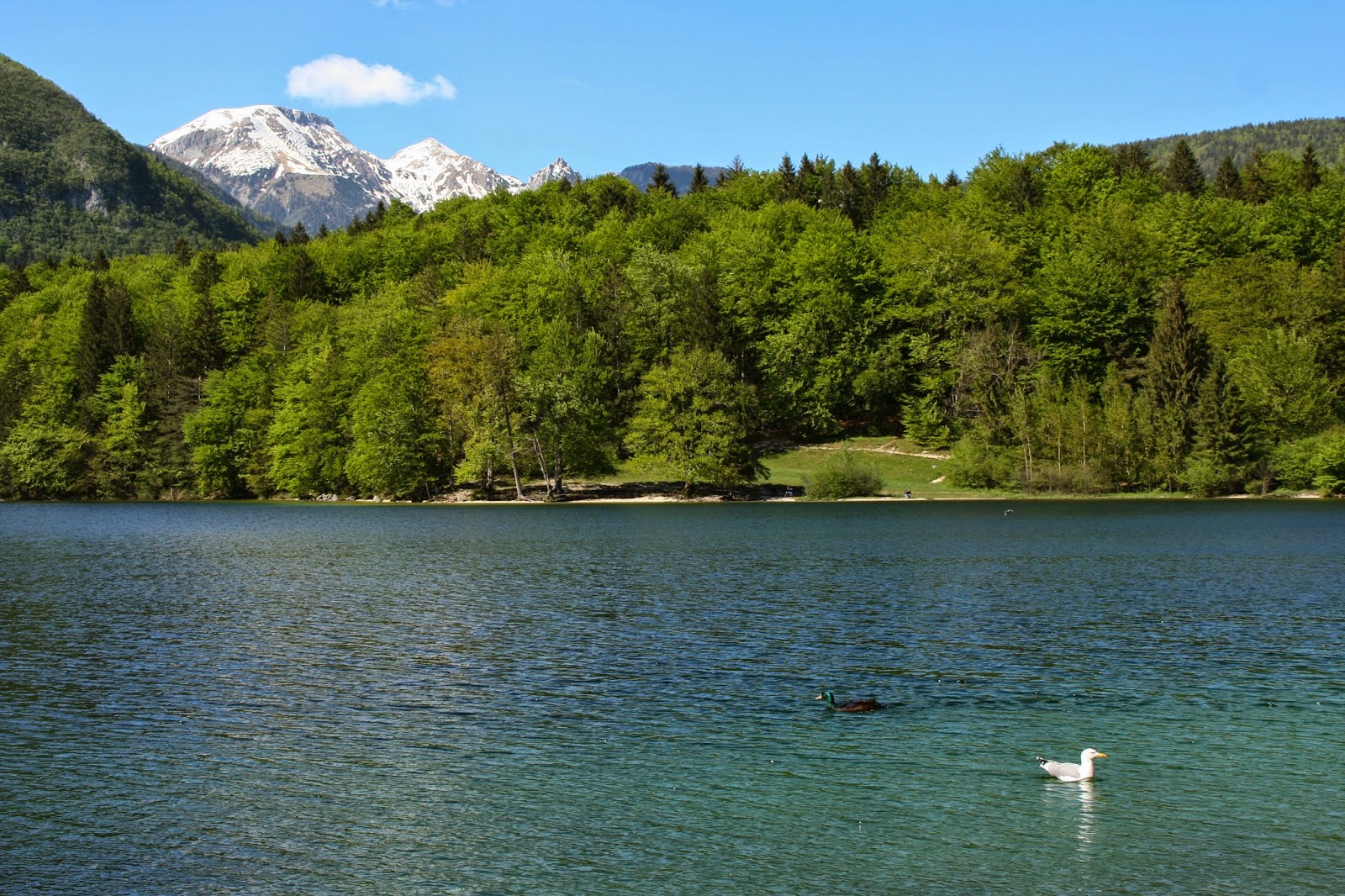 When I return to Slovenia - and like the Terminator, I will be back - I'm planning on staying up there near Lake Bohinj and the Triglav National Park for a few days... or weeks.  By my preferences, it is about as picture-perfect fairytale-land as a place can get, and I want to explore it more!
Posted by Drew at 10:42 AM 1 comment: