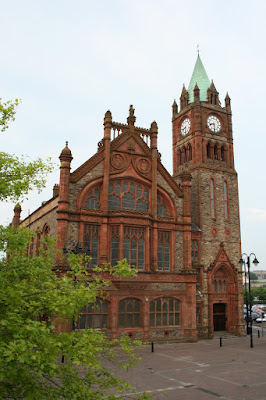 Derry city, Northern Ireland. I was personally expecting some kind of border crossing after our day of driving through Galway, Sligo, and Donegal. Yet, when we got into N. Ireland, the only thing that gave it away were the license plates and traffic signs. It took me a couple minutes to realize that the speed had switched from kph to mph, which meant the people behind me weren't too thrilled. Anyway, Derry city, also known as Londonderry, has long been an English stronghold in the country (since the 1500's). It is an interesting and lively city with an even more interesting history. Its city center is still surrounded by its medieval city walls. Still fully encircling their original perimeter, these represent some of the best preserved city defenses in Europe. Missy and I walked around on top of half the circumference, but had to get down since they access points are locked up at sunset. 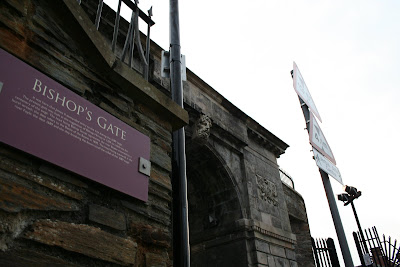 One of the 4 gates along the wall. The wall has plenty of placards discussing the history. Bishop's Gate is seen here with its placard and a few tidbits. 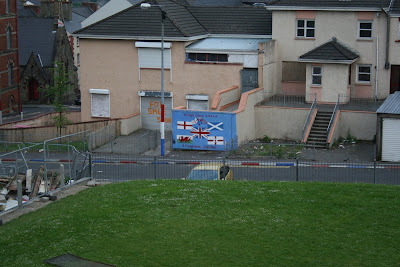 Derry has plenty of murals. Many are republican, but this is a unionist one. Derry was one of the hottest of hotspots during "the troubles." Bloody Sunday occurred here, and for a time, there were sections of the city, called Free Derry, which were essentially run by the IRA and definitely not places where English or Unionist citizens were welcome. Derry City Independent hostel...by far the comfiest, welcoming, and clean hostels I have ever stayed in. I don't even know if you can call this a hostel....it was more like staying at a good friends lovely townhouse. It was decked out in various Asian art, furniture, and Buddha statues and had amazing washrooms. 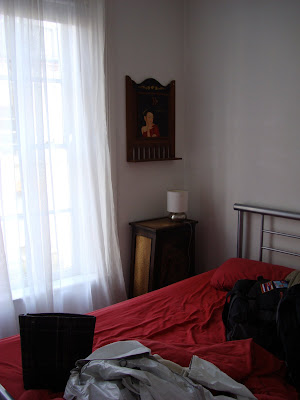 Our double bed room. I wish we could have stayed here for a while...it was a great hostel and a cool city to explore, but we were nearing the end of our trip and still had plenty to see! 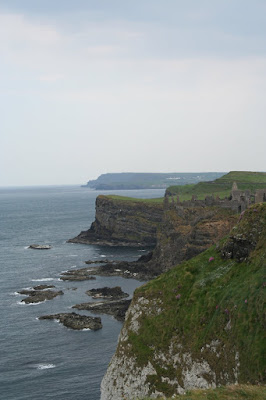 The Antrim Coast....a must see stretch and a must do drive. The Antrim Coast road runs around the northeastern coast past picturesque coastline and many amusing attractions, both natural and man made. 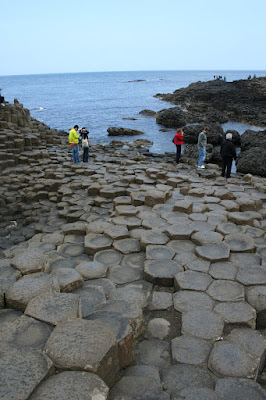 The Giant's Causeway...remarkable to see despite having to share it with way too many tourists. 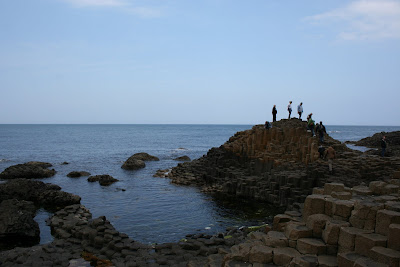 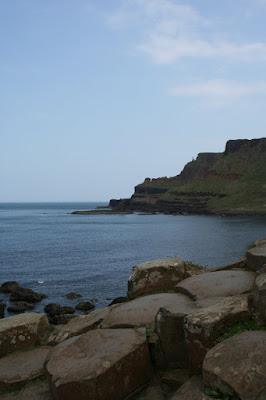 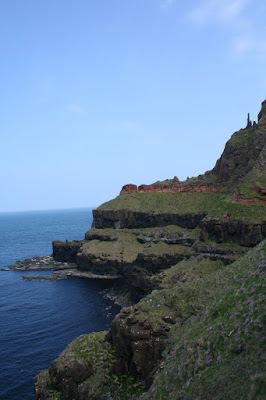 Walk around while at the causeway, especially if the weather is as nice as we had when we were there. 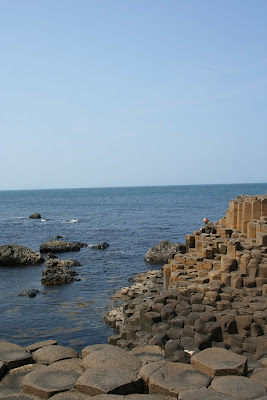 These polygonal basalt columns are the Giant's Causeway. There are an estimated 37,000 of them ranging in height from a few inches to 10's of feet. Hexagons are the most common shape, but they can have as many as 10 sides. Irish legend has it that Finn McCool (actually Fionn Mac Cumhaill in Irish), a warrior from Ulster, fell for a woman giant from Scotland and built the causeway to cross the sea to get to her (the fault line along which the formation lies does indeed resurface on a Scottish island), and another legend tells of Finn building it to go to Scotland to fight another giant. The legend goes on to say that when Finn got to Scotland, he was surprised by the superior size of his Scottish foe. He fled back to Ireland and was pursued by the other giant, but Finn cunningly had his wife build a giant crib in which he hid cuddled up in blankets. When the Scottish giant showed up to fight, he in turn was frightened by the sheer size of Finn's "baby" and fled back to Scotland...good moral to that one eh?!? 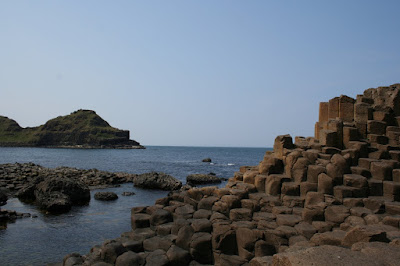 According to geologists, the causeway actually formed by a massive subterranean explosion that shot molten basalt up to the surface where it cooled and basically crystallized into these shapes. 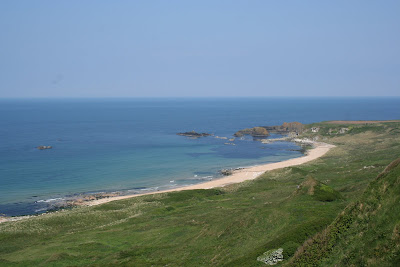 We had a beautiful day while we were driving the coast road. It started out overcast, but the sun cleared the clouds away, leaving perfect blue skies and this amazing ocean of turquoise. 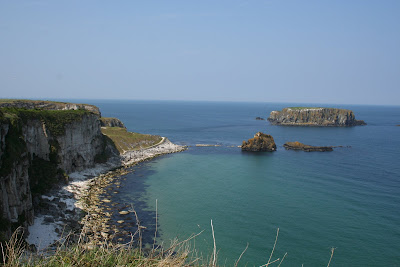 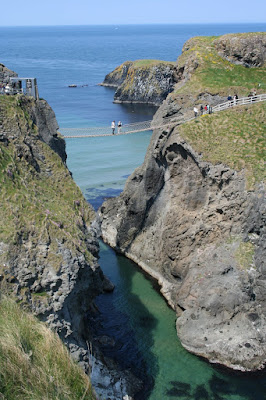 The Carrick-a-rede rope bridge...definitely worth checking out. The island is connected to the mainland by an old rope bridge (which is now reinforced by steel cables), which was originally built by fishermen. It was hilarious to see how frightened some people got when it was their turn to cross, I loved it! 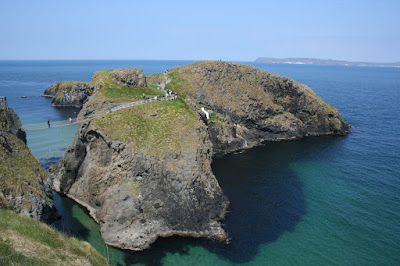 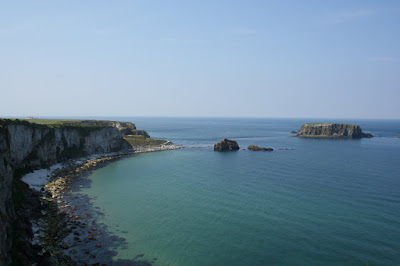 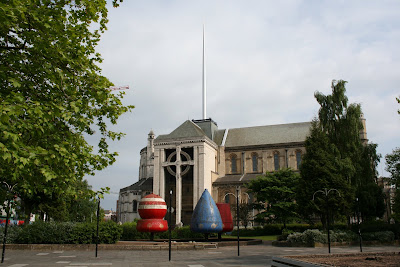 Belfast, the capital of N. Ireland. Belfast is a very large city, and Missy and I only spent a few hours here. Overall, I found the cities of Northern Ireland to be much too big and industrialized compared to their equivalents in the Republic. Both Derry and Belfast seemed like they had lots to offer though, and I hope that if I ever get back to either, I will be able to spend a bit more time enjoying them. 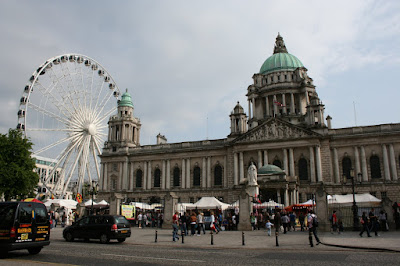 There was a continental food fest going on outside of City Hall, seen here. There was plenty of food from all over Europe here, which was really cool. Missy and I ended up going for a bit of French (a potato and cream with ham dish...and absolutely delicious) and a bit of German (bratwurst). This will end my Irish post. Our last full day, Missy and I drove back from Belfast to Dublin via Dundalk and the Bru na Boinne site, with its prehistoric tomb-mounds and passage graves. Overall, I absolutely loved Ireland, and will do my best to return again sometime in the future.
Posted by Drew at 6:42 PM No comments: 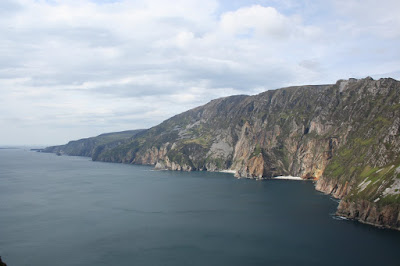 This picture is totally out of place, but I wanted to start out with a good one. So on this day, we drove from Galway city to Derry in N. Ireland, but we decided to take a little bit of a roundabout route (see map in previous post) to explore a bit of County Donegal, which is famous for its beauty. At this point though, we were well aware that practically the whole island is famous for its beauty, but we just didn't want to miss out on this, especially since Donegal is the birthplace of my now infamous patchwork cap. 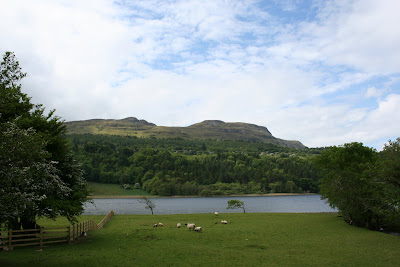 This was actually taken in county Sligo. We pulled off to see a waterfall shortly after the town of Drumcliffe. The body of water is Glencar Lough, which sits beautifully between the tree-lined slopes of the Dartry Mountains. It was a beautiful setting. The waterfall was nice too! 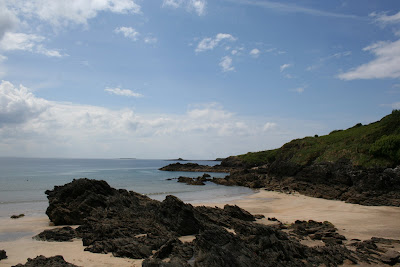 We zipped pretty quickly through County Sligo and up into Donegal. When we got into Donegal town, we were expecting to stop for lunch, but were met by some heavily armed military personnel (and I do mean heavily armed...these guys had fully automatic assault rifles) in the town-square, which seemed lovely. We were quite intimidated and figured there must be something special or dangerous going on and just passed through. It seemed like a nice town though! Anyway, we ended up stopping at this beach slightly west of town to picnic. 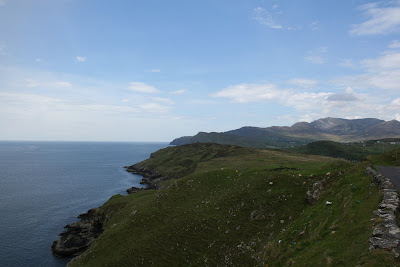 Looking west along the Donegal coastline. 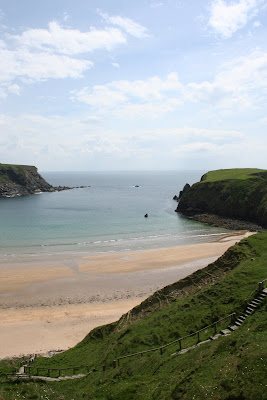 After our disappointing day at the Cliffs of Moher and our unfortunate bit of luck with the cliffs in County Kerry, we really wanted to see some of Ireland's famous west-coast cliffs in full sun. Donegal happens to have reputedly the highest cliffs in Europe! It just turns out they were hard to find...we knew where they were, but couldn't find the road (turnoff really) to get to them! Anyway, these cliffs lie on the southernmost peninsula in the county, almost at the very tip. We ended up driving around their backside, which were still scenic, but not what we wanted, through a very country-side setting with a lot, and I mean a lot, of peat extraction by the locals. We drove out to the very tip, to a small community called Malinbeg, and found this little gem. This beach was boxed in on three sides by these cliffs...and though the pictures do little justice, this beach is one of the most beautiful I've seen thanks to this setting. 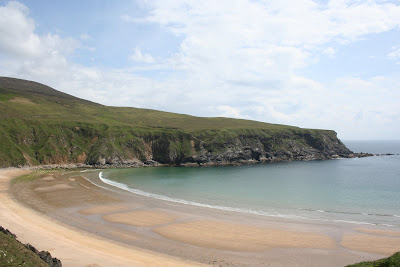 A steep staircase takes visitors down to the sand. It's a huge strip and walking around you are surrounded on three sides by steep, emerald green cliffsides with the odd crags sticking out here and there, and on the remaining side by the beautifully blue (when fully sunlit) North Atlantic Ocean. There is even a waterfall! Truly amazing setting. 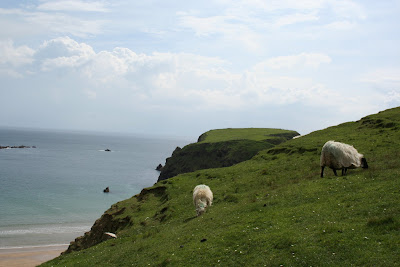 And don't forget the sheep...they were all over the cliff-tops too. 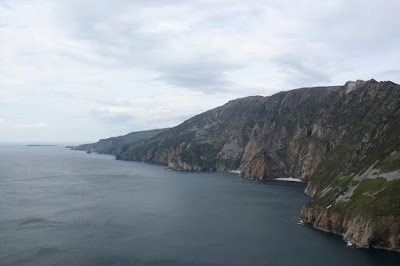 Anyway, we finally found the turnout (on the other side of the cliffs from where we started), and here they are. The Bunglass Cliffs shoot up over 600 meters from the ocean below...3 times the height of the Cliffs of Moher. From up there, the ocean below seems unbelievably distant and leaves one with the false sense that you are too high and too far separated from the waves below for anything to go wrong...weird feeling. Anyway, once again, these pictures don't do justice to the real setting...but they will have to do until you see them yourselves. 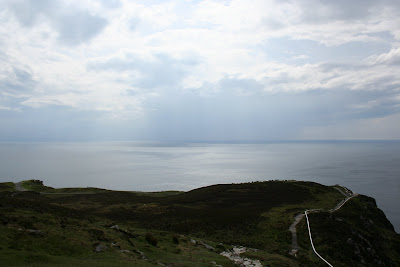 A "road" brings you quite a ways up the cliffs. It was pretty sketchy at times since they apparently don't believe in guardrails...or two lanes...or warning signs. 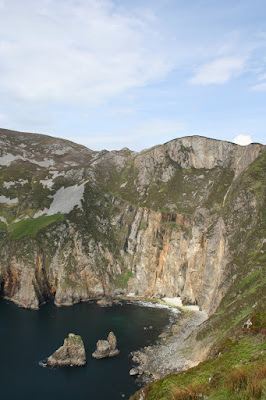 Visitors can hike all the way around to the top of the cliffs....actually they can go all the way around to Malinbeg if they really want (we saw a couple returning from such a hike while we were lounging on the beach). Missy and I hiked part of the way up, but were forced to turn back due to time. At least we finally got to see some cliffs in pleasant weather though!
Posted by Drew at 6:43 AM No comments: