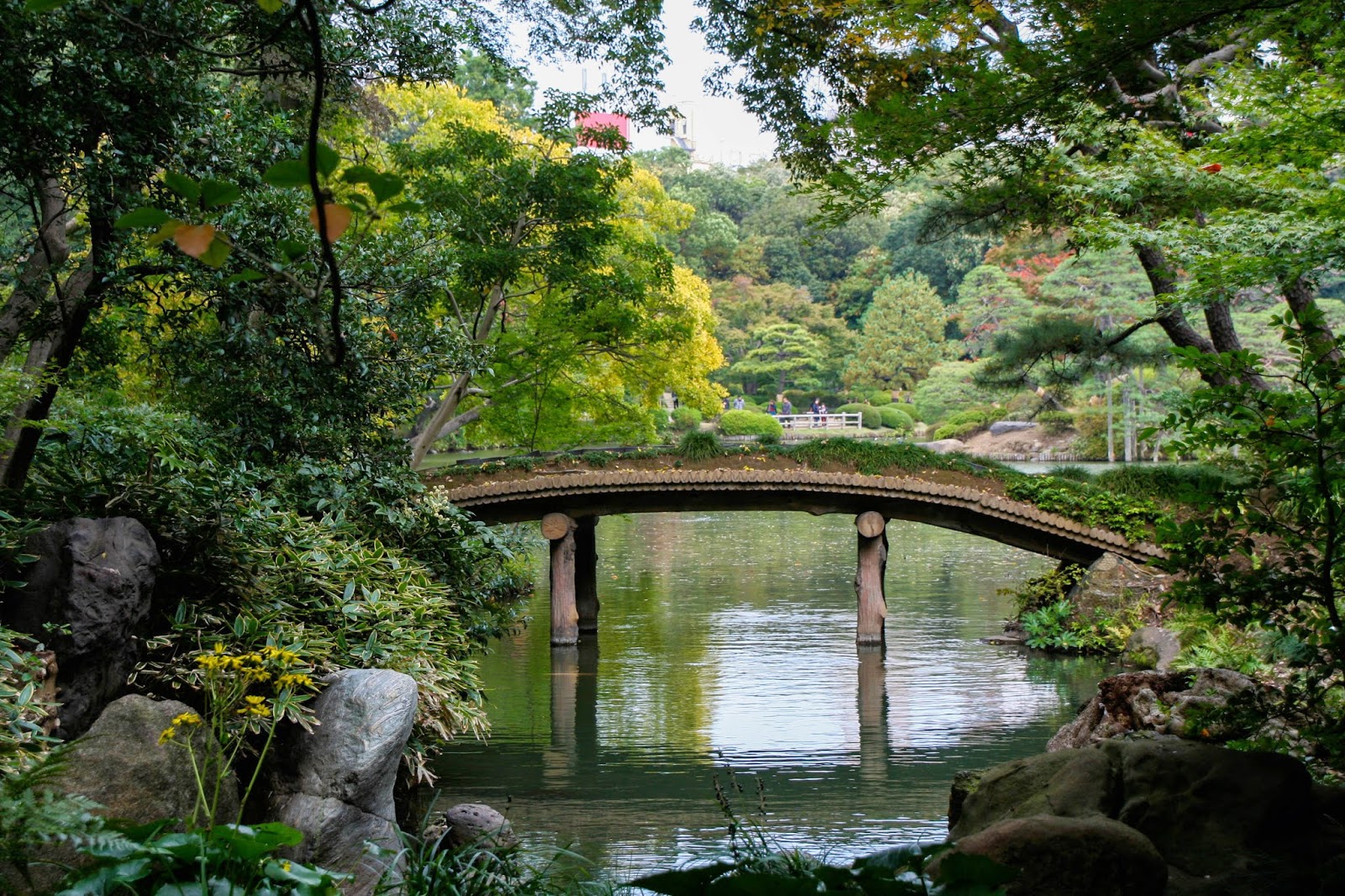 Return to Tokyo
to explore afresh, that huge
and tireless city 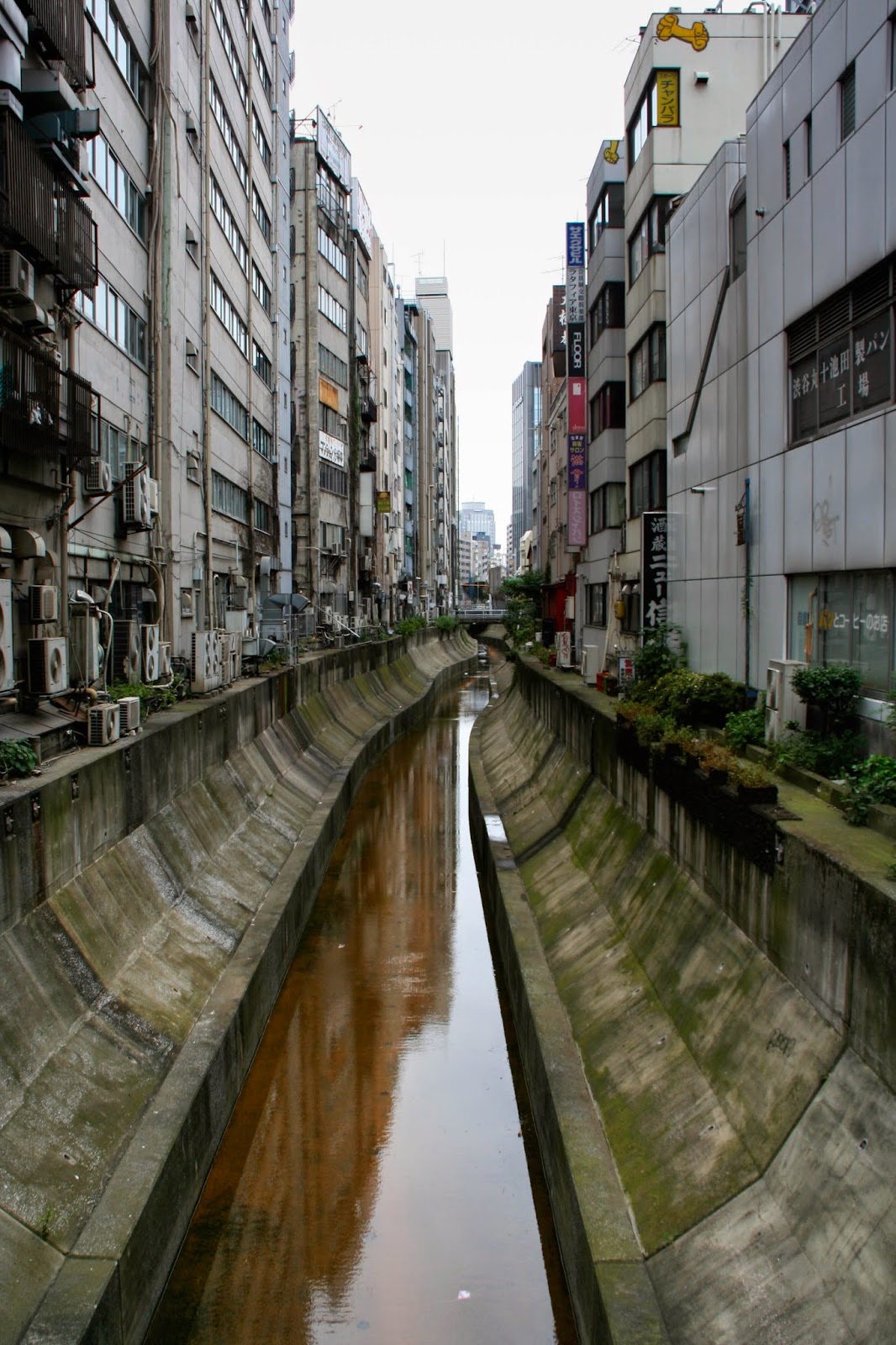 My second trip to Tokyo.  I explored some new places as well as familiar spots with a new perspective.  The density of the megalopolis was less intimidating this time, but nowhere near less impressive.  This urbanized creek running through an alley caught my eye as I wondered on foot one day there.  I loved the reflections in the water and the dreary atmosphere.  This scene made me wonder: could this be a glimpse of the future of our planet?  If humanity is able to sustain its exponential population growth, will all creeks, rivers, and lakes end up cement lined and pressed in by multi-story dwellings like this one?  I certainly hope not, and if the Japanese are any indicator, then we should be fine.  Despite one of the densest populations on the planet, Japan has still done very, very well preserving some beautiful natural landscapes, like forests, mountains, and lakes.  To do so, they have embraced high density and close quarters in their cities and towns, and Tokyo is the biggest and densest of them all. 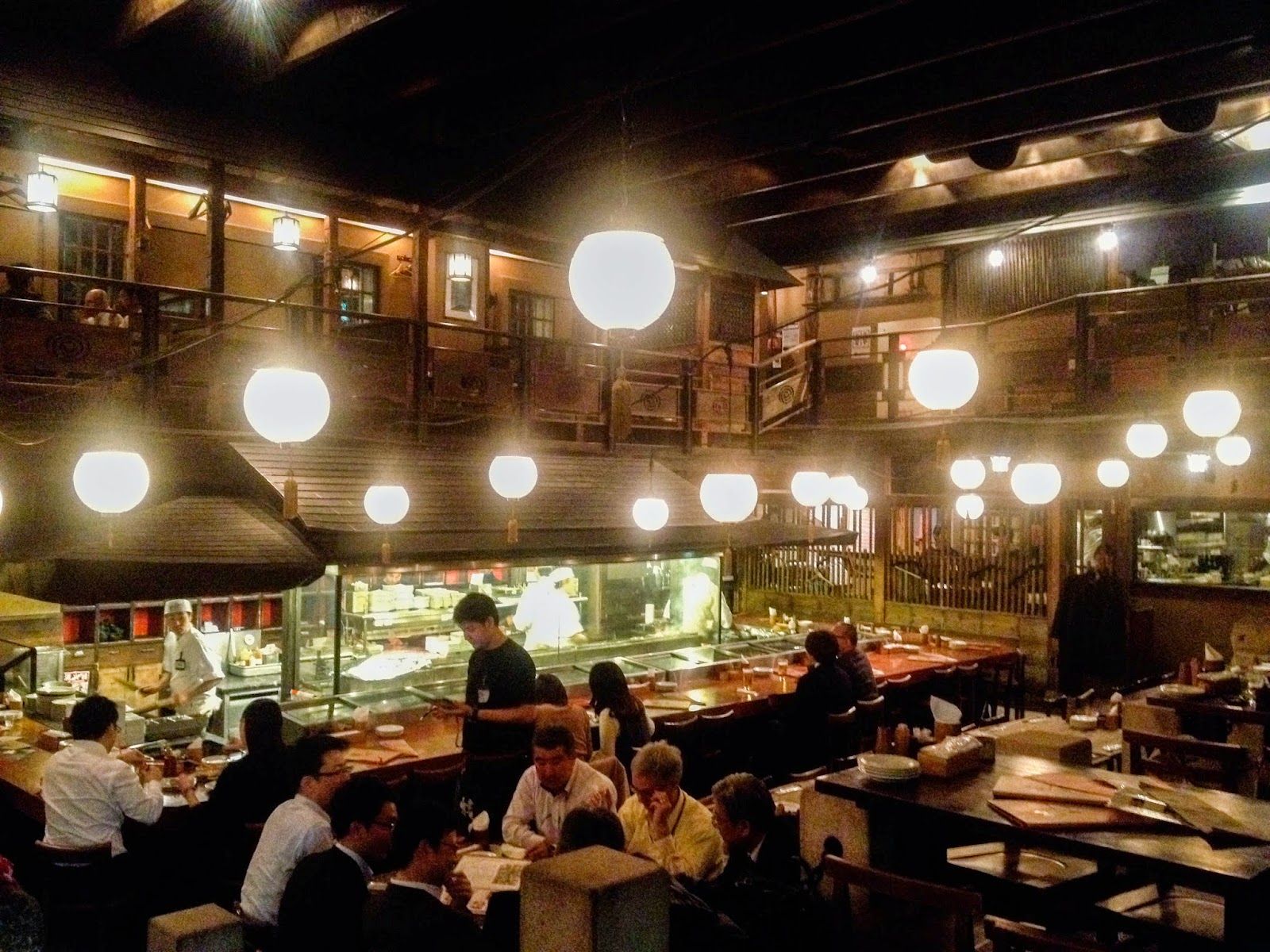 Tokyo has one of the richest and highest-quality dining scenes in the world.  The majority of the options are Japanese cuisine, which is highly varied, sometimes tremendously complex and other times elegantly simple, but always extremely delicious.  As in most metropolitan big cities though, you can find food options from all over the world too.  And, thanks to the Japanese traits of attention to detail and demand for quality, the food in general tends to be really, really good, regardless of whether you're going for sushi or spaghetti or tacos!  The picture above was taken at a Japanese restaurant with some great food that is apparently frequented by Quentin Tarantino.... look around the picture, does it seem familiar?  If you're a fan of Tarantino films, it might... supposedly this place gave the director inspiration for the set of the Crazy-88s fight scene in Kill Bill Vol. 1. 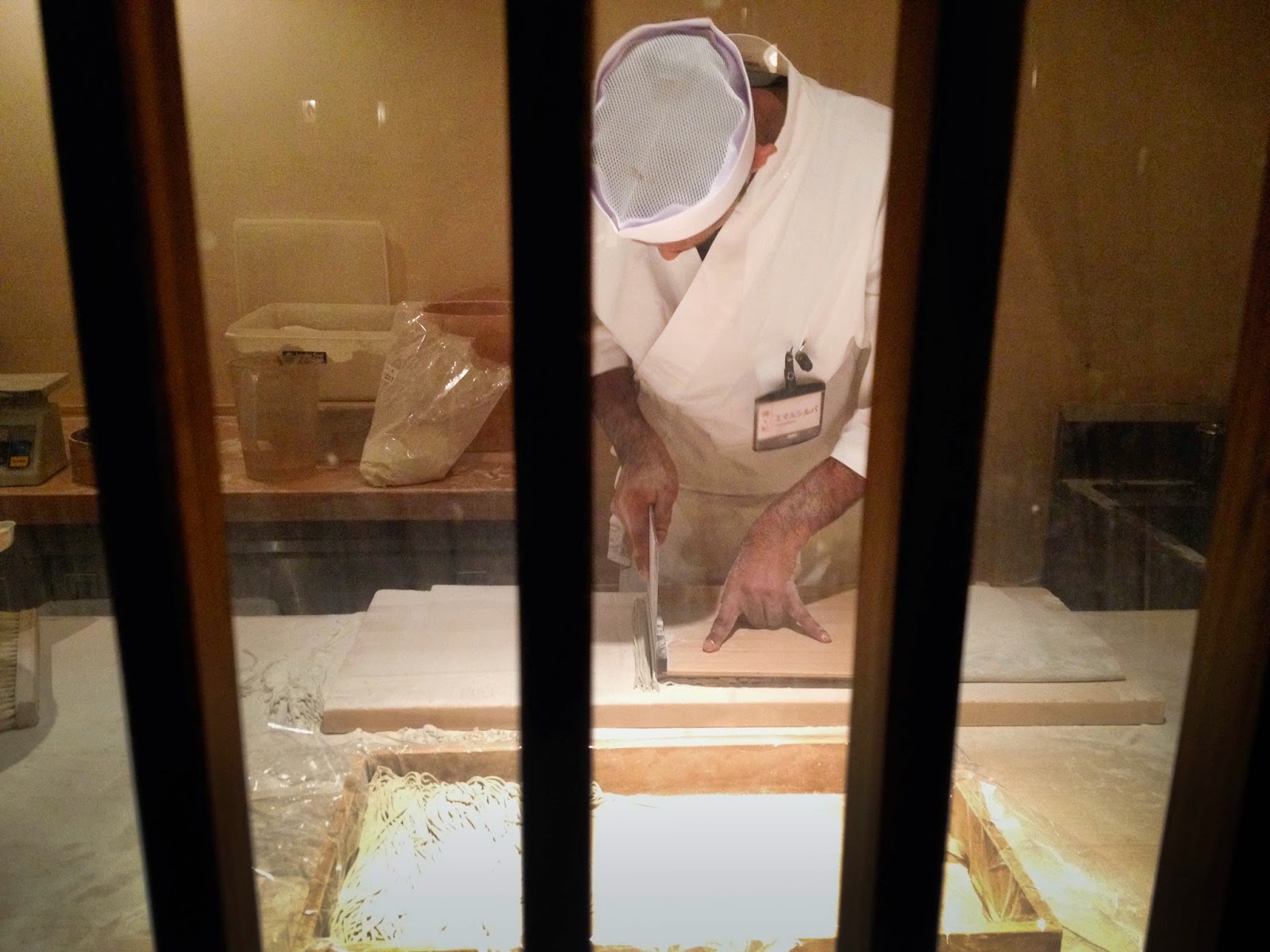 Handcutting soba noodles.  The preparation of these noodles is an art, taken very seriously by Japanese soba chefs.  Soba is Japanese for buckwheat, but it is also synonymous with these noodles made from buckwheat flower.  Soba dishes are one of the more popular in Japanese cuisine, with the noodles served either hot or cold depending on the dish.  They are quite tasty, especially when combined with the special sauces and garnishes that the chefs so carefully pair with them, and pleasantly filling too. 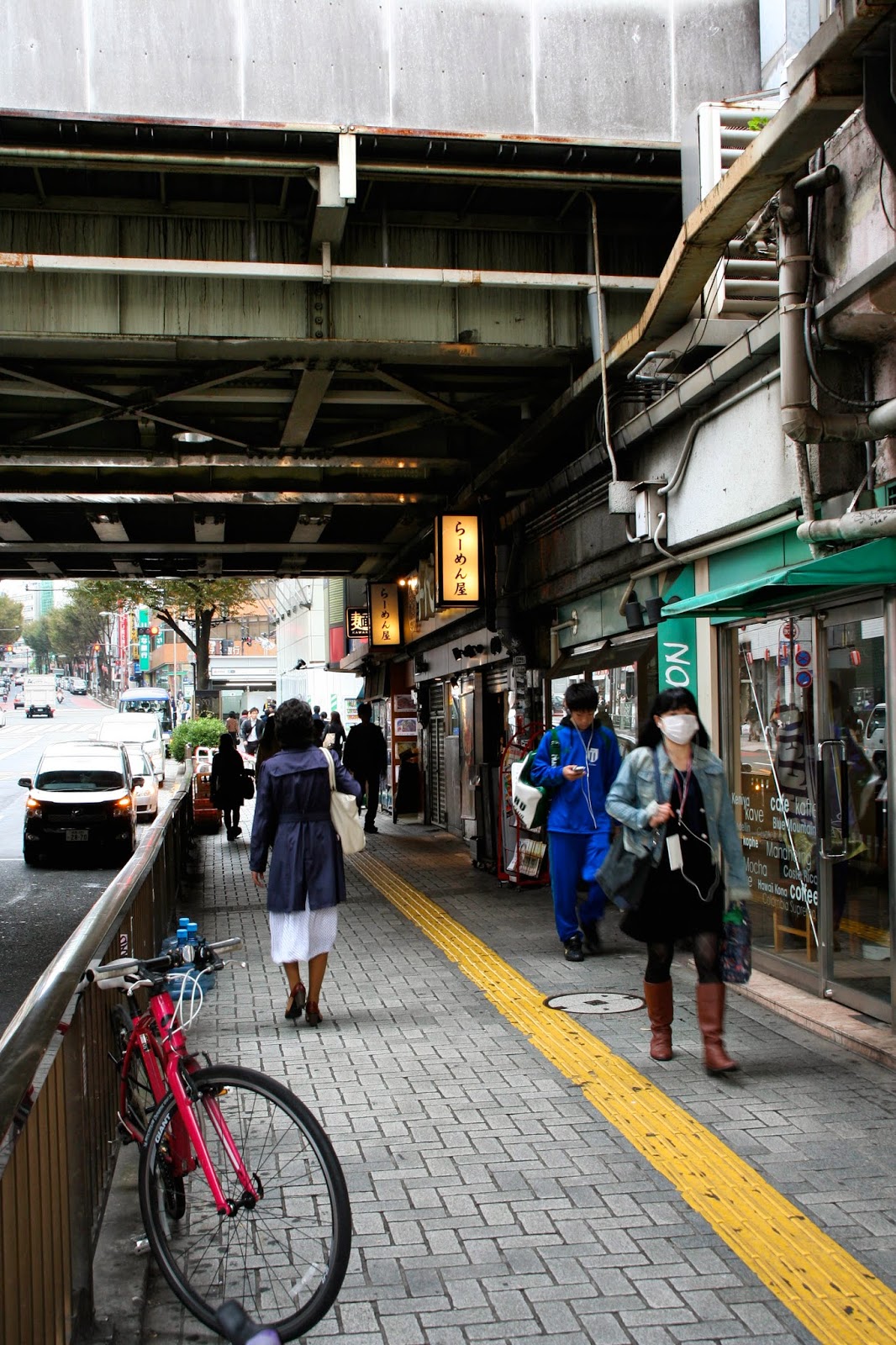 Down on the street.  Tokyo is a seemingly never-ending, multi-layered maze of streets and alleys and overpasses and underpasses and tunnels.  Many of the streets are lined with shops and businesses but there are also residential districts and buildings scattered here and there (particularly above businesses on the first few floors).  The majority of people seem to get around via foot and metro, using the city's extensive network of rail options operated by multiple companies (which can be terribly confusing to the first time, gaijin traveler).  Many, many others use bicycles too, and the city seems pretty bike friendly overall.  They even allow bikes on the sidewalks in places where there are no lanes on the streets! 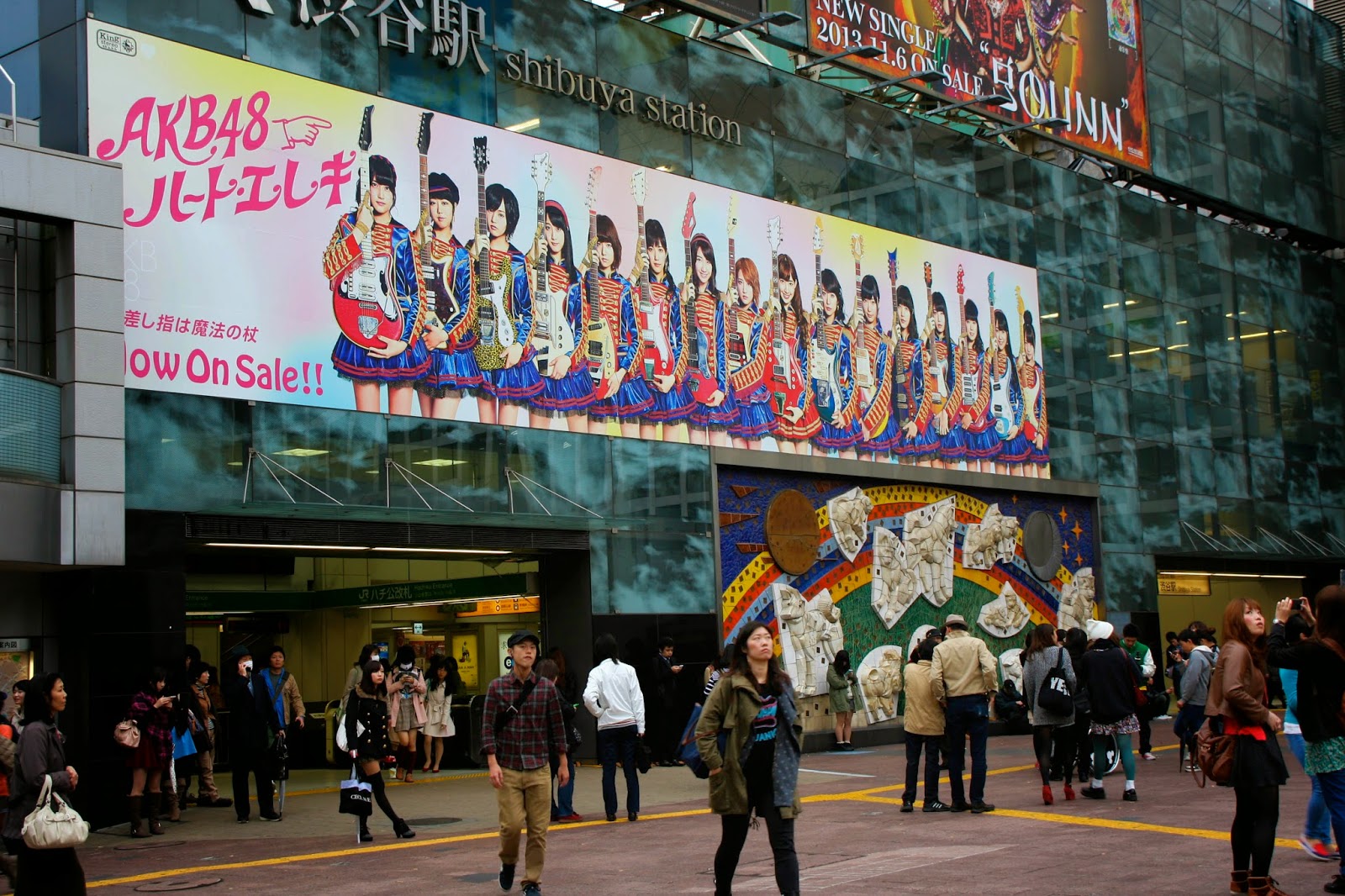 Shibuya Station and the AKB48.  Shibuya is one of the main metro and rail stations near the central part of Tokyo.  It is huge, thanks to it being a transfer point between multiple lines.  Outside the station is also typically packed with people heading to work or shopping or to go eat.  Shibuya is one of the busiest and liveliest areas in the city.  In the lower-right-center of this picture is the mosaic monument to Hachiko, a dog whose statue also stands outside the station.  Hachiko has been immortalized for his undying devotion and commitment to his owner (see my Tokyo: Chaos post from last year).  Above the mosaic, is an enormous banner advertisement for the latest product from AKB48, a teenie-pop girl band that is confoundingly popular in Japan.  The group is put together of more than 80 girls from their mid-teens to mid-20s.  They are dolled up (or perhaps "down" be more appropriate here?) to look much younger than they really are... playing on the disturbing school-girl fetish that seems to thrive in Japan.  These girls sign a contract that forbid their having any contact with men while they are active members of the band.  This rule is heavily enforced too; just last year, one of the members appeared with a freshly shaven head in a YouTube video confessing her shame (hence the shaven head) in having spent the night with a boyfriend, which was in breach of her contract; she was demoted to trainee status after the public confession.  The girls are also often depicted in sexually intimating videos and photos (think lingerie pillow fights and bikini car washes or group baths with plenty of bubbles and playful splashing), which when combined with their obvious depiction as young teen girls (like 13 young) is really upsetting in my personal opinion.  Freedom of the media is a wonderful thing though, and obviously they are popular amongst enough people to make their franchise extremely successful... I only hope the girls are well-paid and at least satisfied with their work. 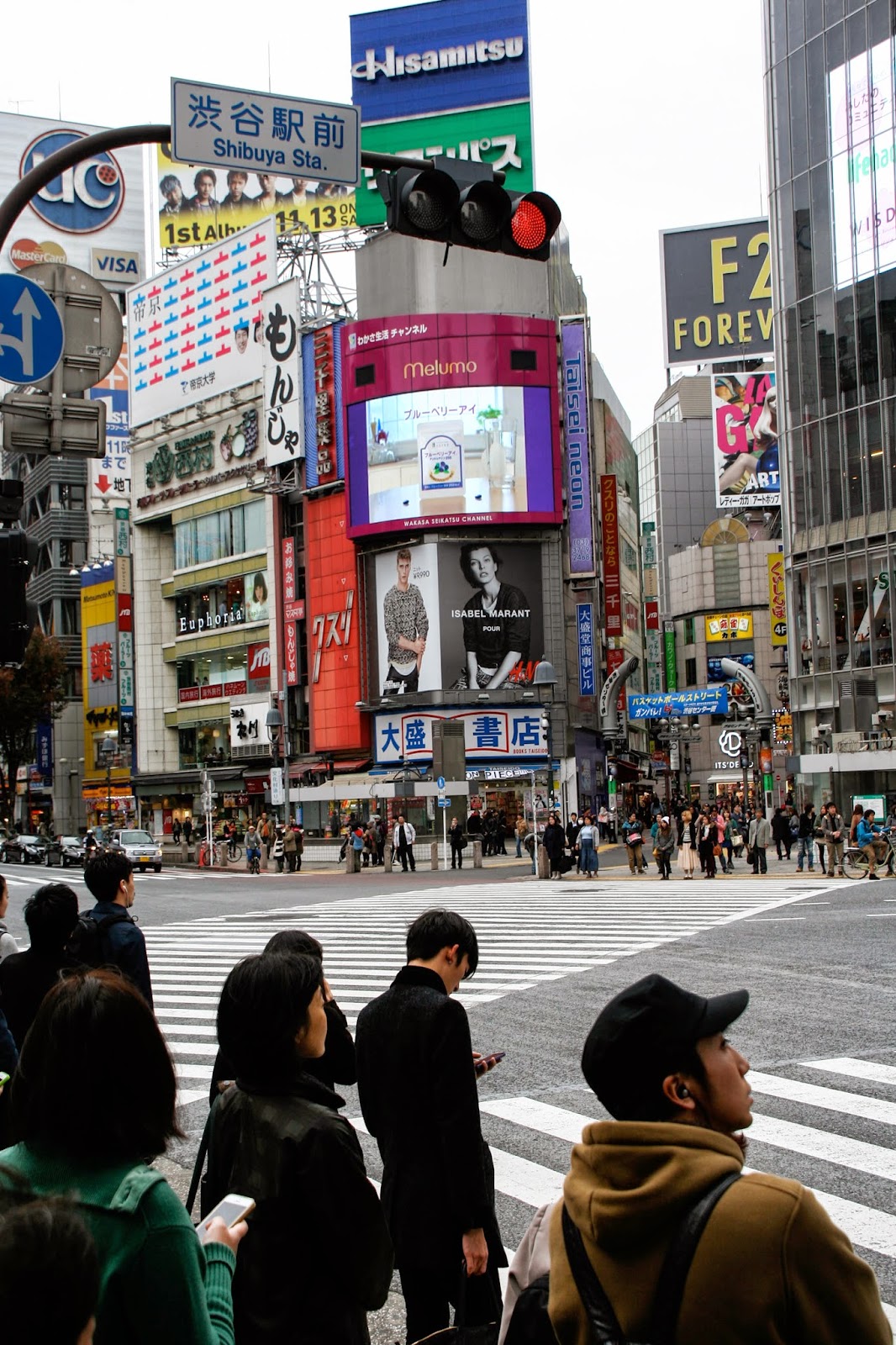 Just outside the Shibuya station is the intersection crossing of the same name.  As I covered in my last post, his crossing is crazy.  Here are a couple more pictures to demonstrate that.  Being one of the busiest (if not the busiest) pedestrian crossing in the world, billboard space is a premium here.  It reminds me a bit of Times Square in New York.  And of course, there are more pop band billboards (look at the boy band just under the street sign at the top of the pics).  Across the crossing from this view is a cool little area with plenty of shopping, restaurants, and bars, which is quite fun to explore by foot.  Just remember to not limit yourself to street level only... there is plenty more to see on the first several floors (and basement levels too!), which are indicated on numbered signs outside of buildings on the ground floor. 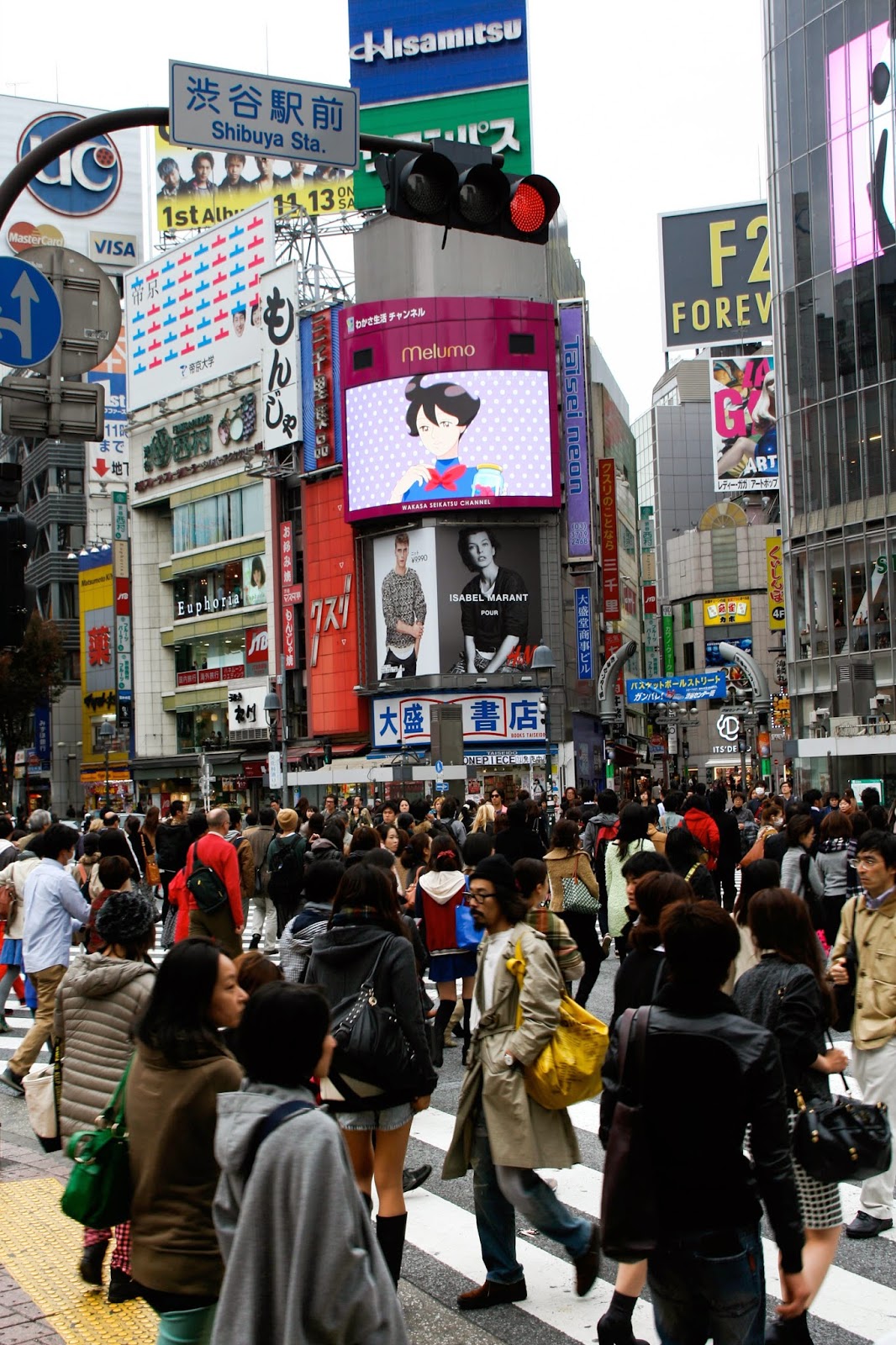 The crossing fills like this every ~45 seconds or so... seriously. 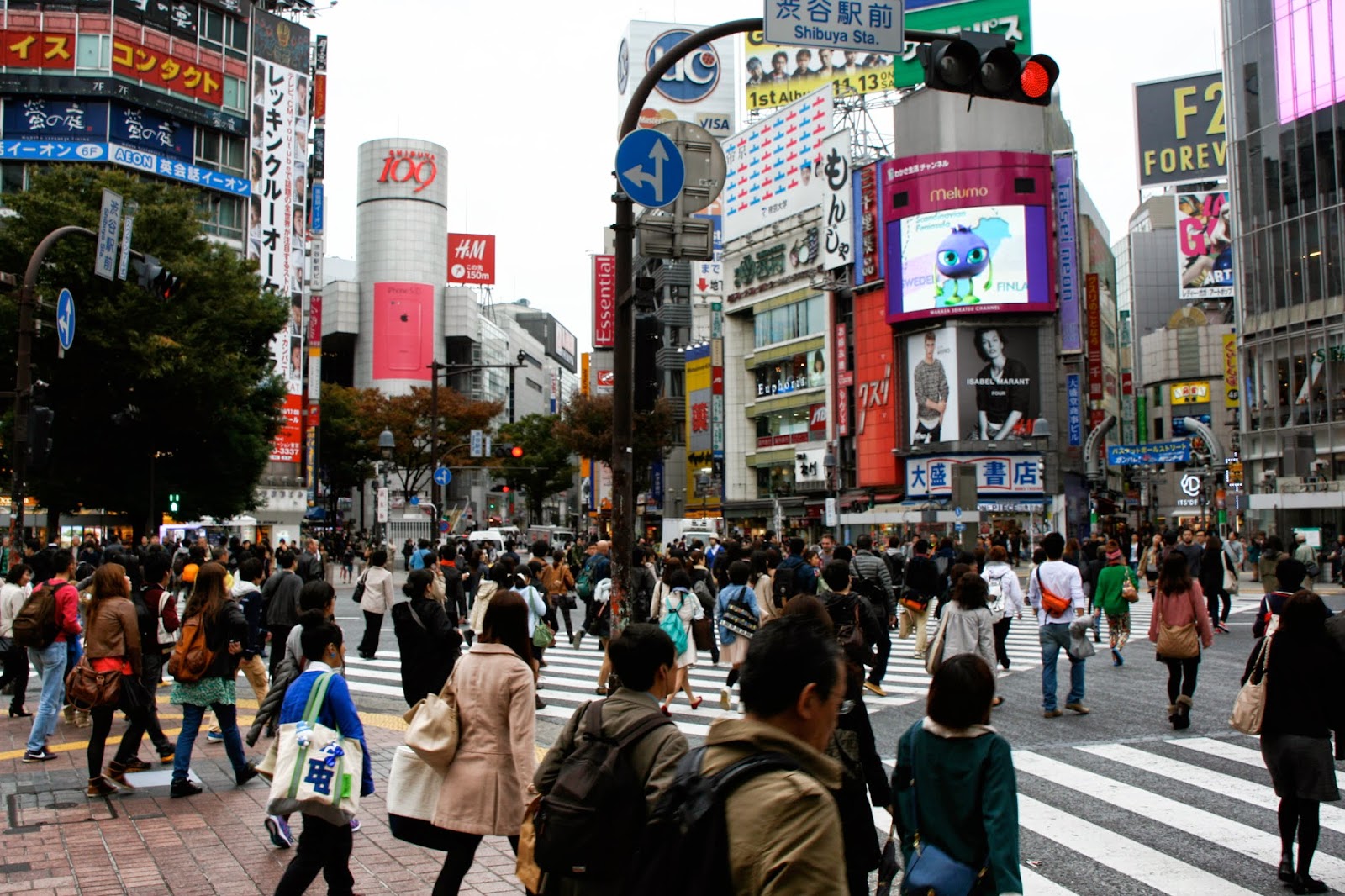 Views like this make the crossing look chaotic, but it is actually really, really well organized.  People only cross when the pedestrian signal says they should and even in heavy traffic, I never saw cars filling the intersection.  Crowds on the sidewalks of Tokyo tend to be pretty polite and respectful overall too, at least for a gaijin male like me.  It's quite impressive. 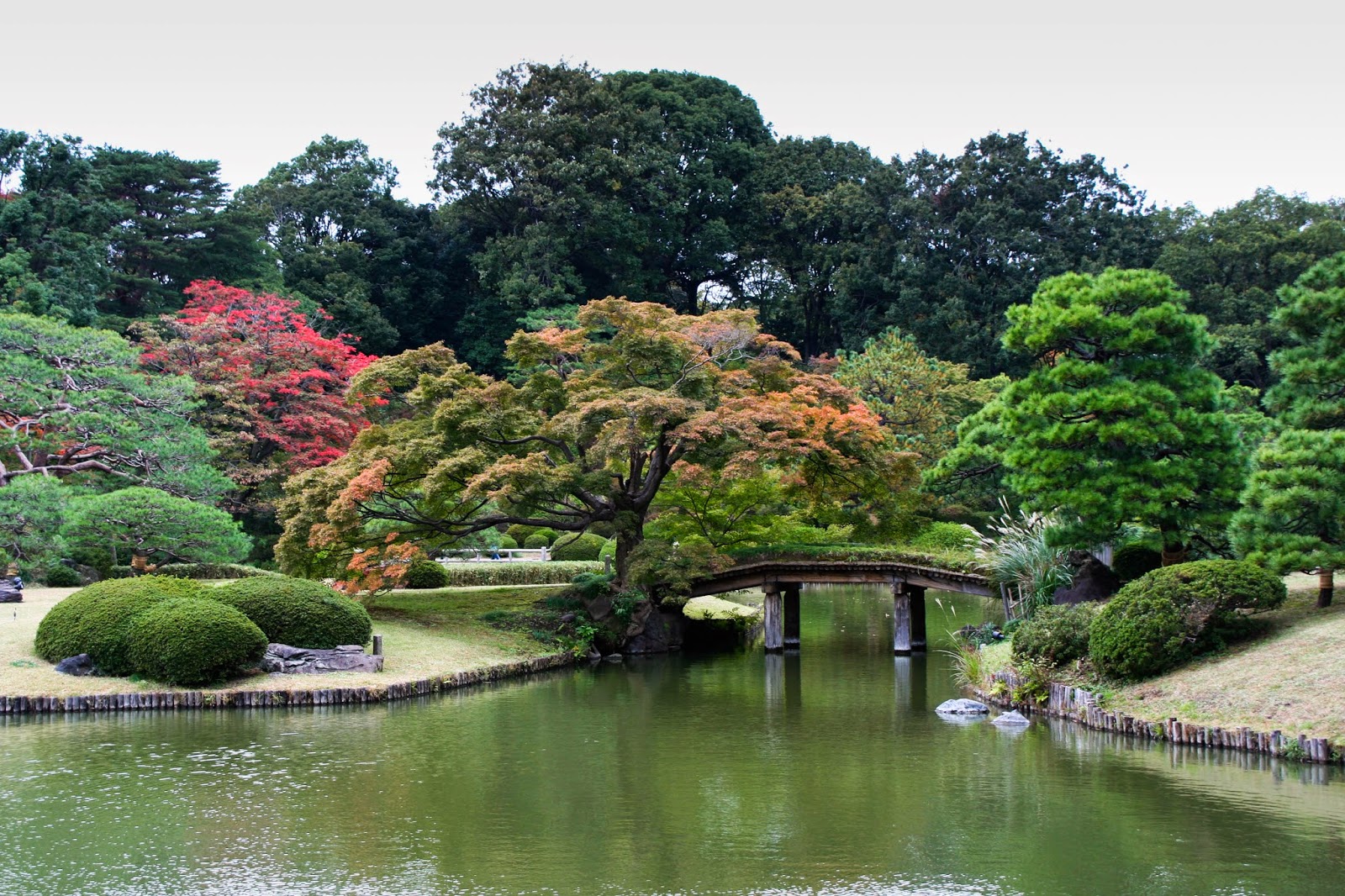 One of the things I made sure to do this trip was to check a few more sights off of my list that I hadn't managed to get to last year.  The top of that list was the Rikugi-en park and gardens.  Created around the turn of the 18th century, the gardens were donated to the city and turned into a public place in 1938.  The gardens were specially designed to depict famous scenes from Japanese poetry.  There are 88 different "spots" in the garden that have literary significance, and the place is set up with a network of meandering trails that work their way around a large, central pond.  It is quite beautiful, and a nice escape from the frantic streets and urban-scape of the city outside the garden walls. 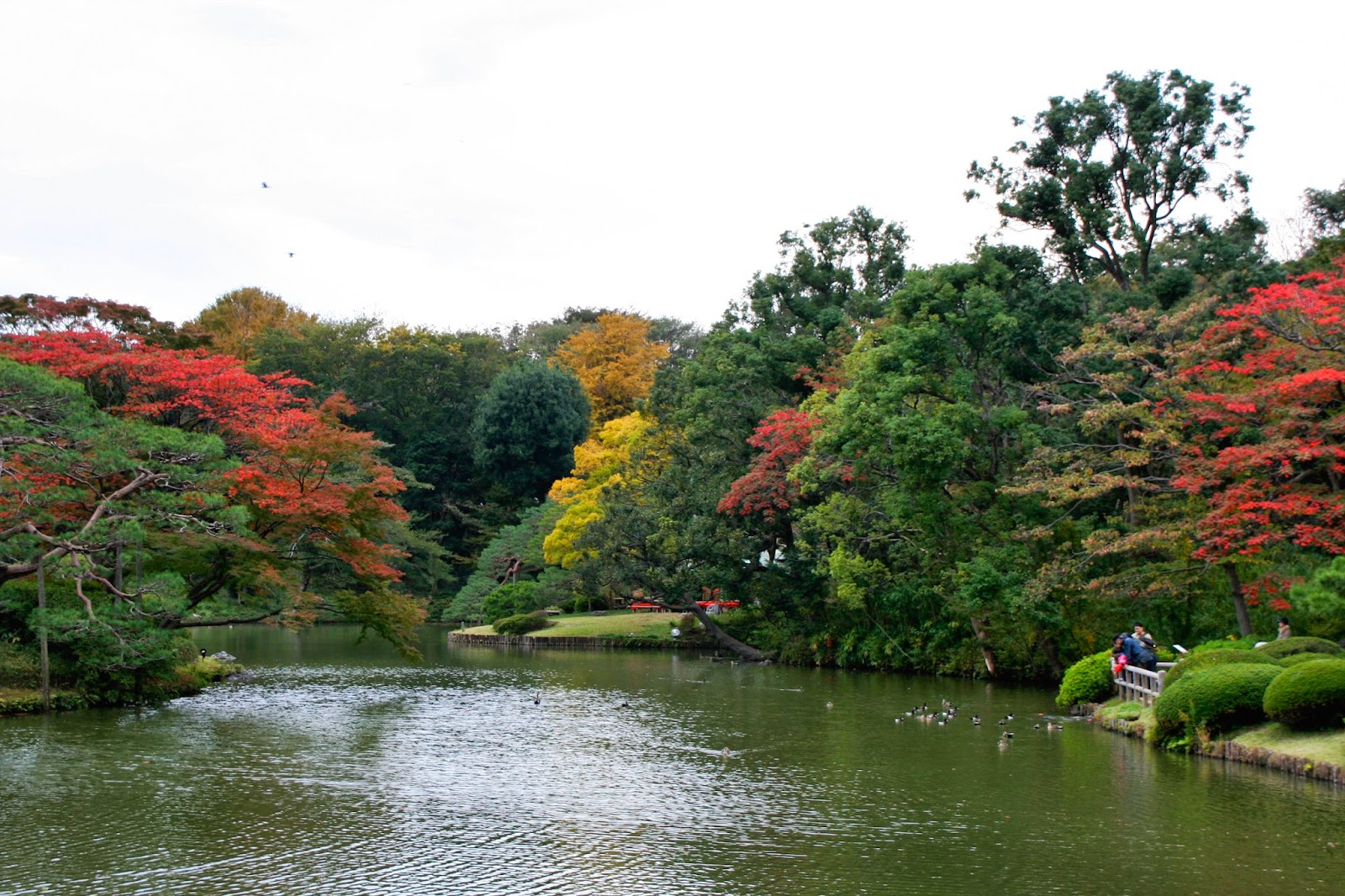 Being there in fall, I was lucky to see some autumn foliage.  Around the city there were these vibrant bursts of red, orange, and yellow, and Rikugi-en offered all three at once. 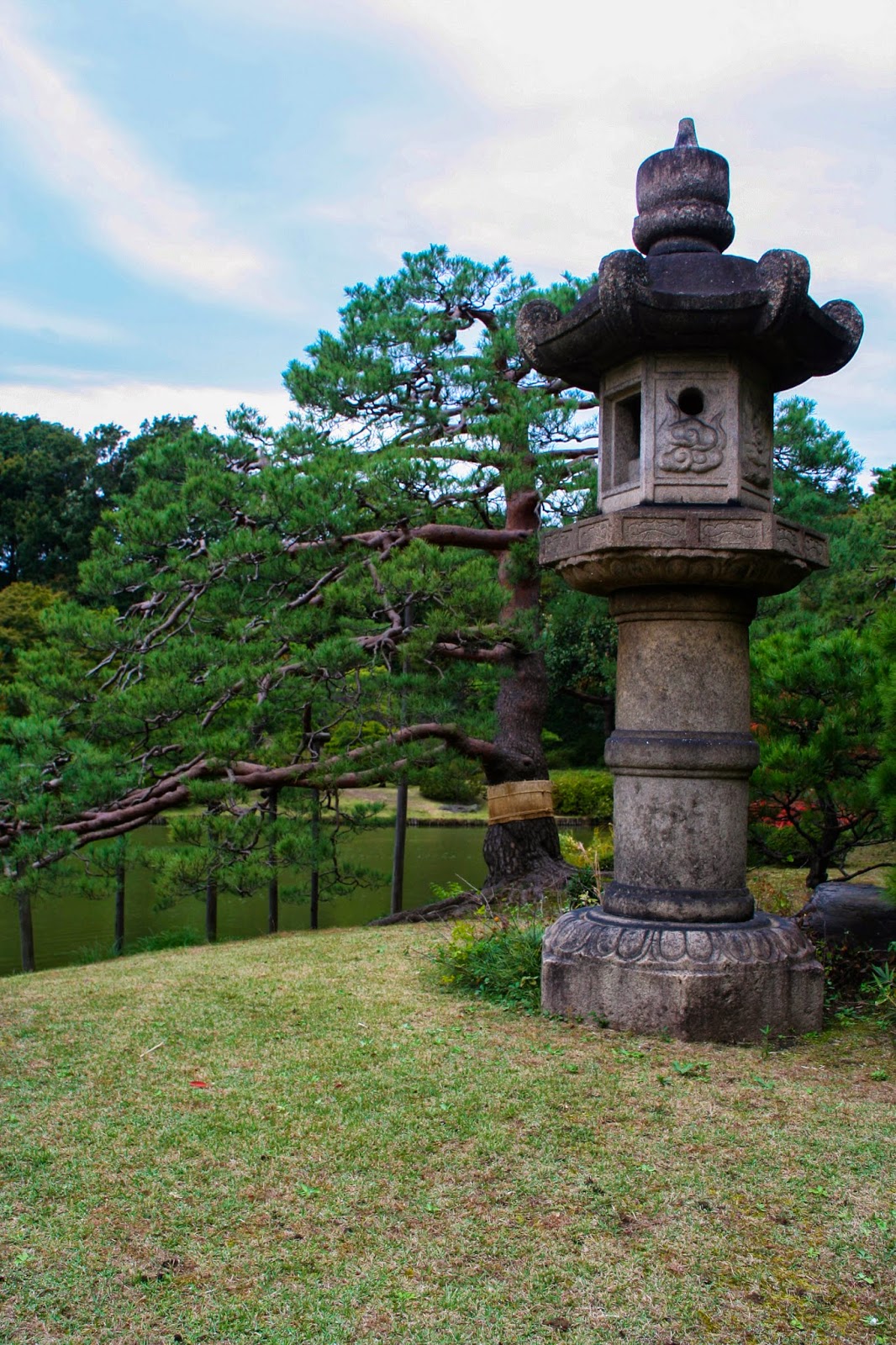 Like classic Japanese style in general, the park was simple, elegant, and well-proportioned. 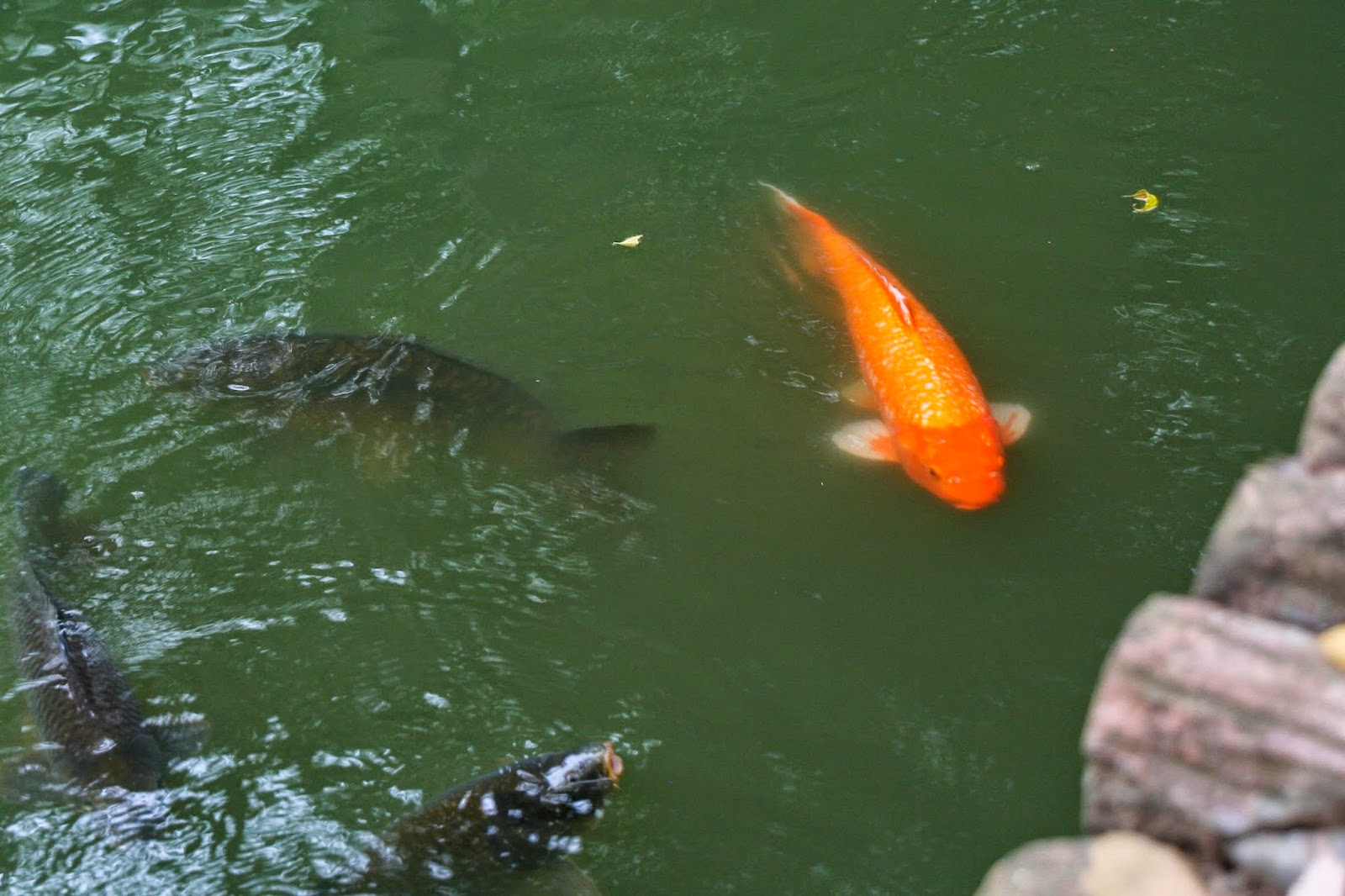 Of course, there was also a koi pond. 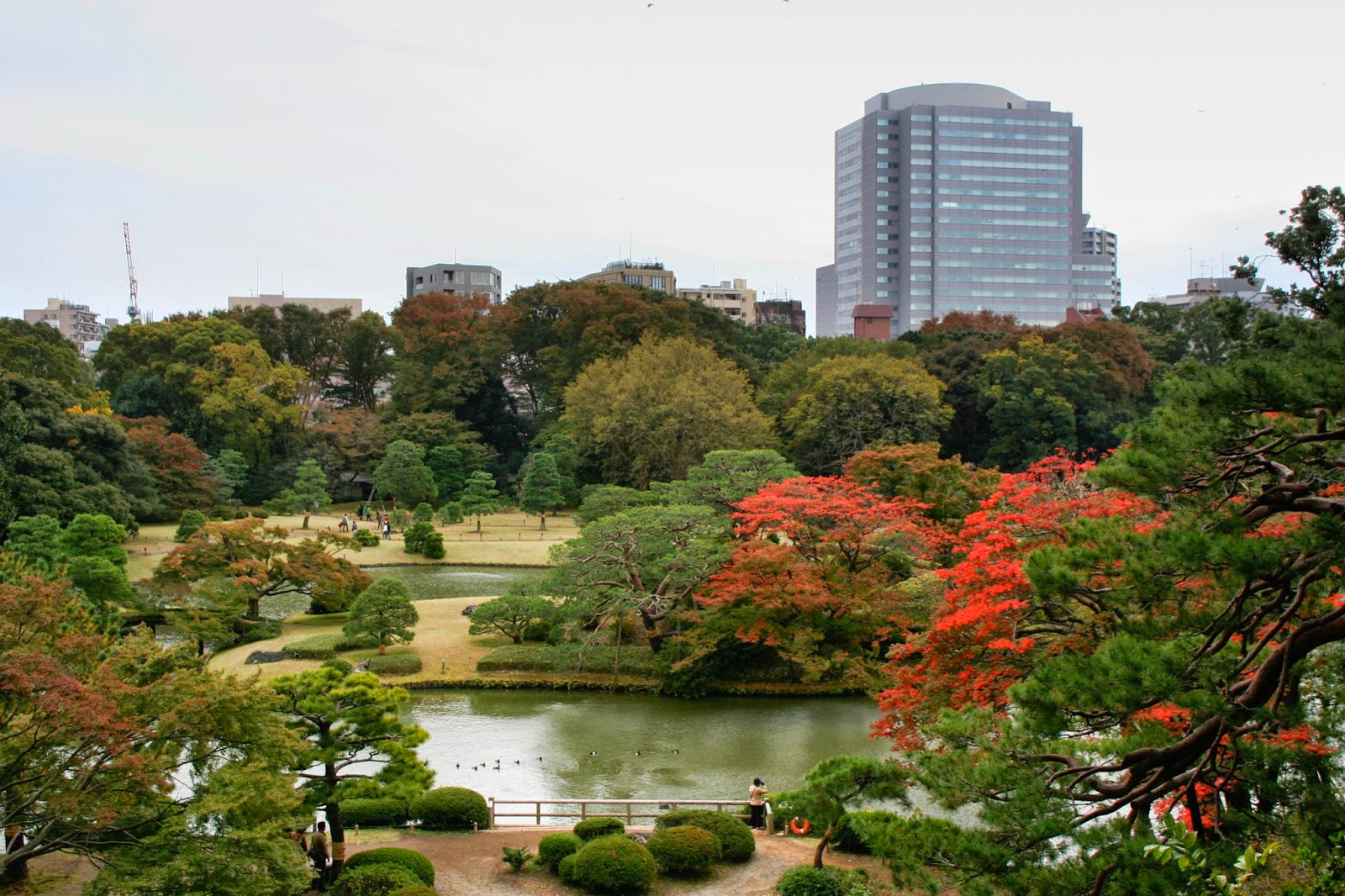 The hill on the far side from the entrance is definitely worth the climb for the views down over much of the rest of the park. 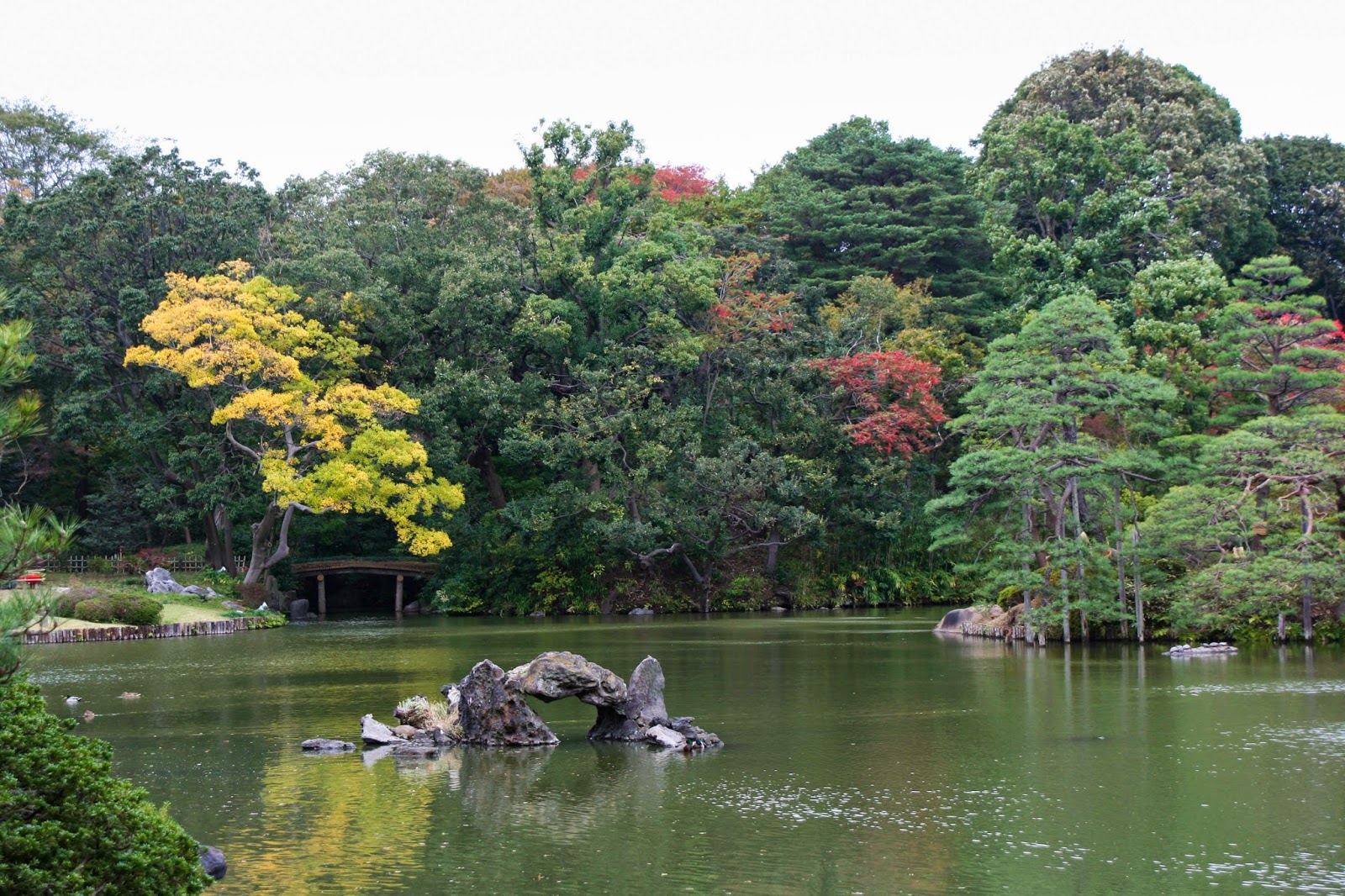 The park was carefully designed and maintained to give it a very natural look and feel.  It's really crazy to think that this lies in the middle of the world's biggest city.  Inside the park, you don't hear any traffic and can find plenty of views like this, where no buildings are visible. 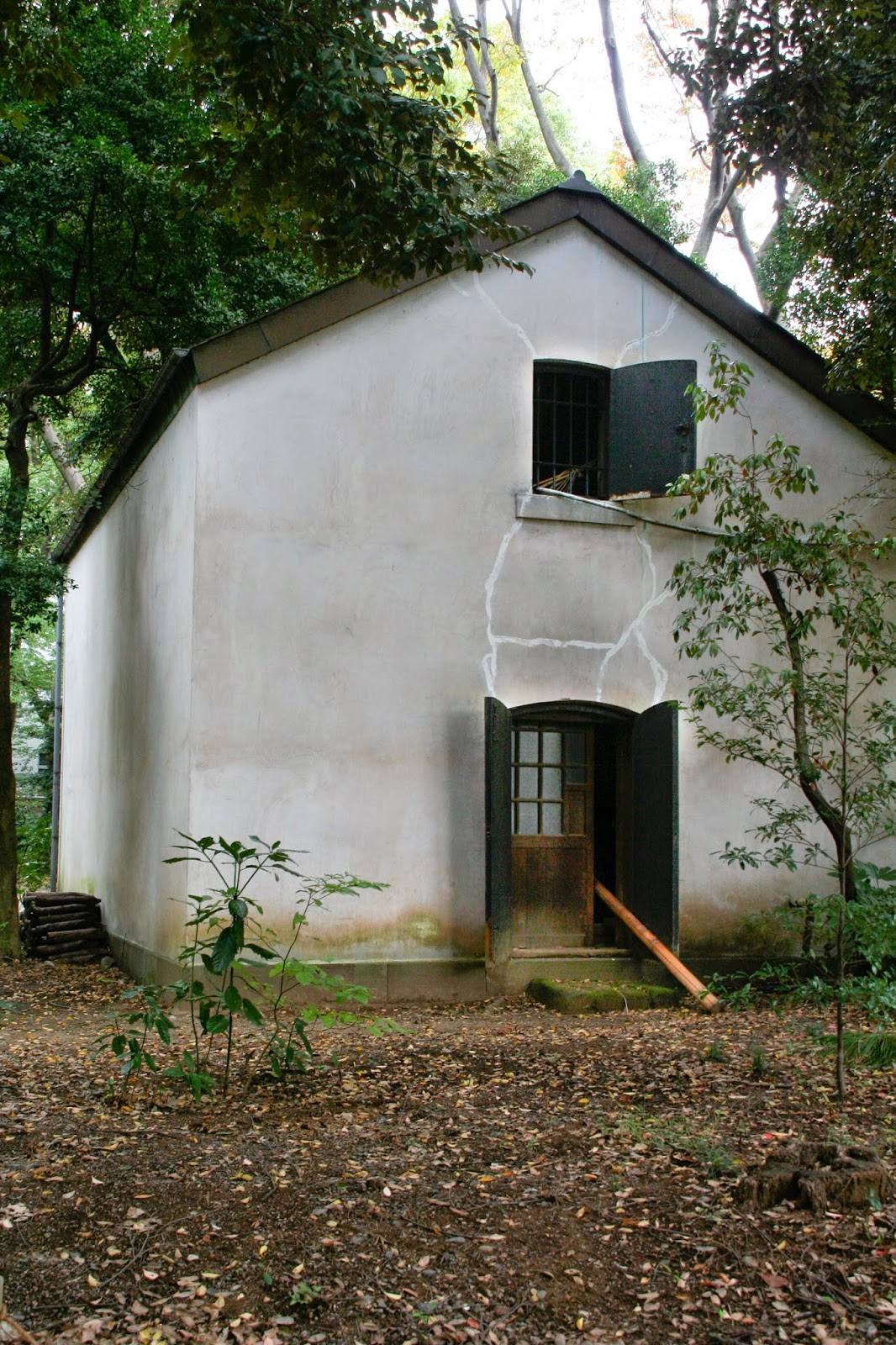 I don't know what exactly this old building was for, but it was quite interesting.  It was quite weird that it had no windows; it seemed to be more like a barn or shed than a house. 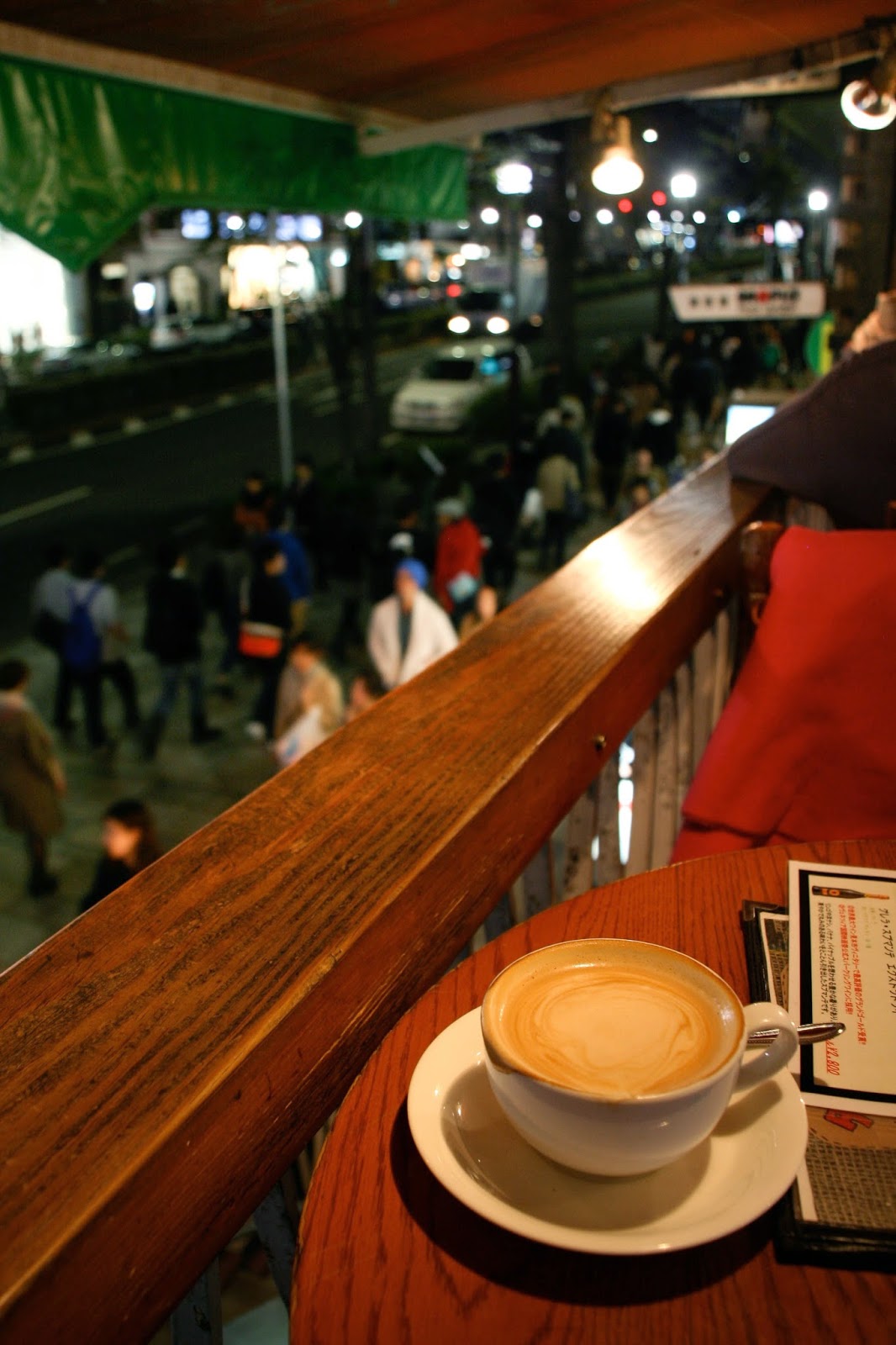 Back to the city... first stop, Harajuku for some coffee and people watching.  This place was called Double Tall and had a great terrace overlooking the very busy street below.  Street level can be quite chaotic and somewhat stressful at times, but dip into a little cafe or up onto a second floor balcony, and all the sudden, it is easy to relax and find a little peace, particularly if you enjoy watching the various folks going about their business out on the street. 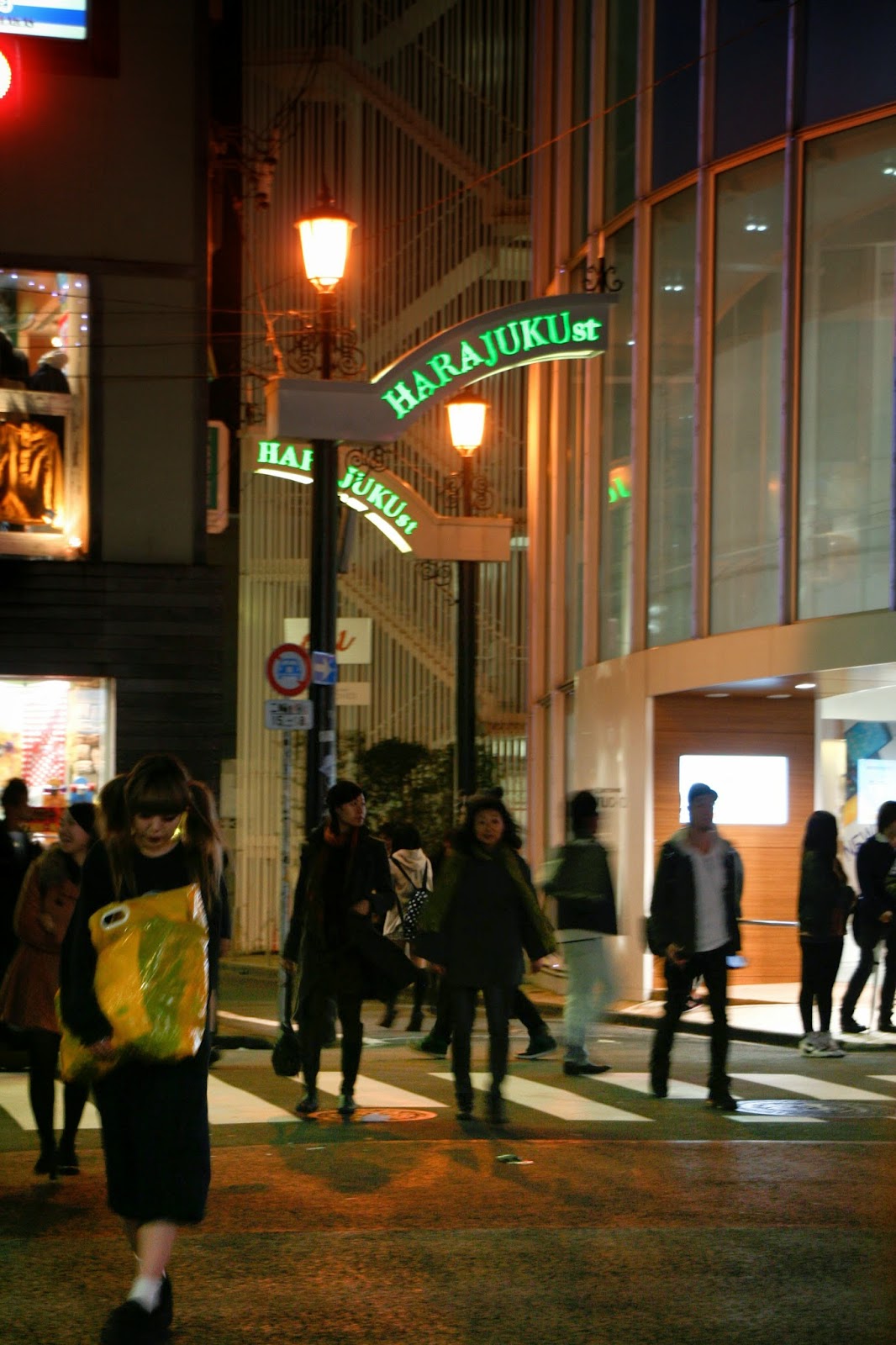 Harajuku is a hip part of town known for its adventurous and eccentric merchandise and customers.  It is a youthful district, with plenty of energy, and it is a great place to shop for some unique
Tokyo souvenirs.  It is also a great place for people watching... being sometimes more like an avant-garde fashion show than a retail area. 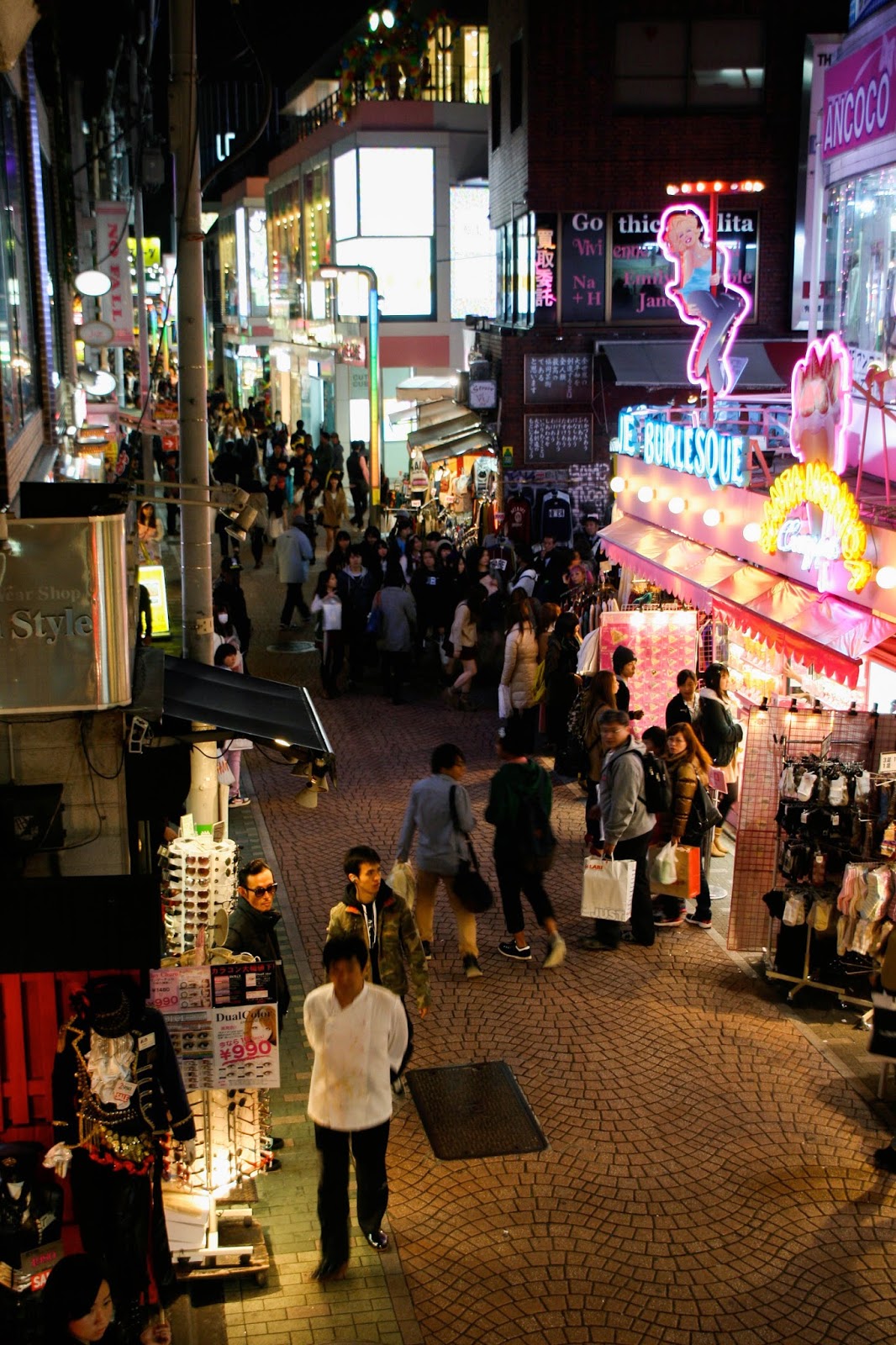 I mentioned the place is energetic... this was just a normal weeknight, but it is even busier on the weekend. 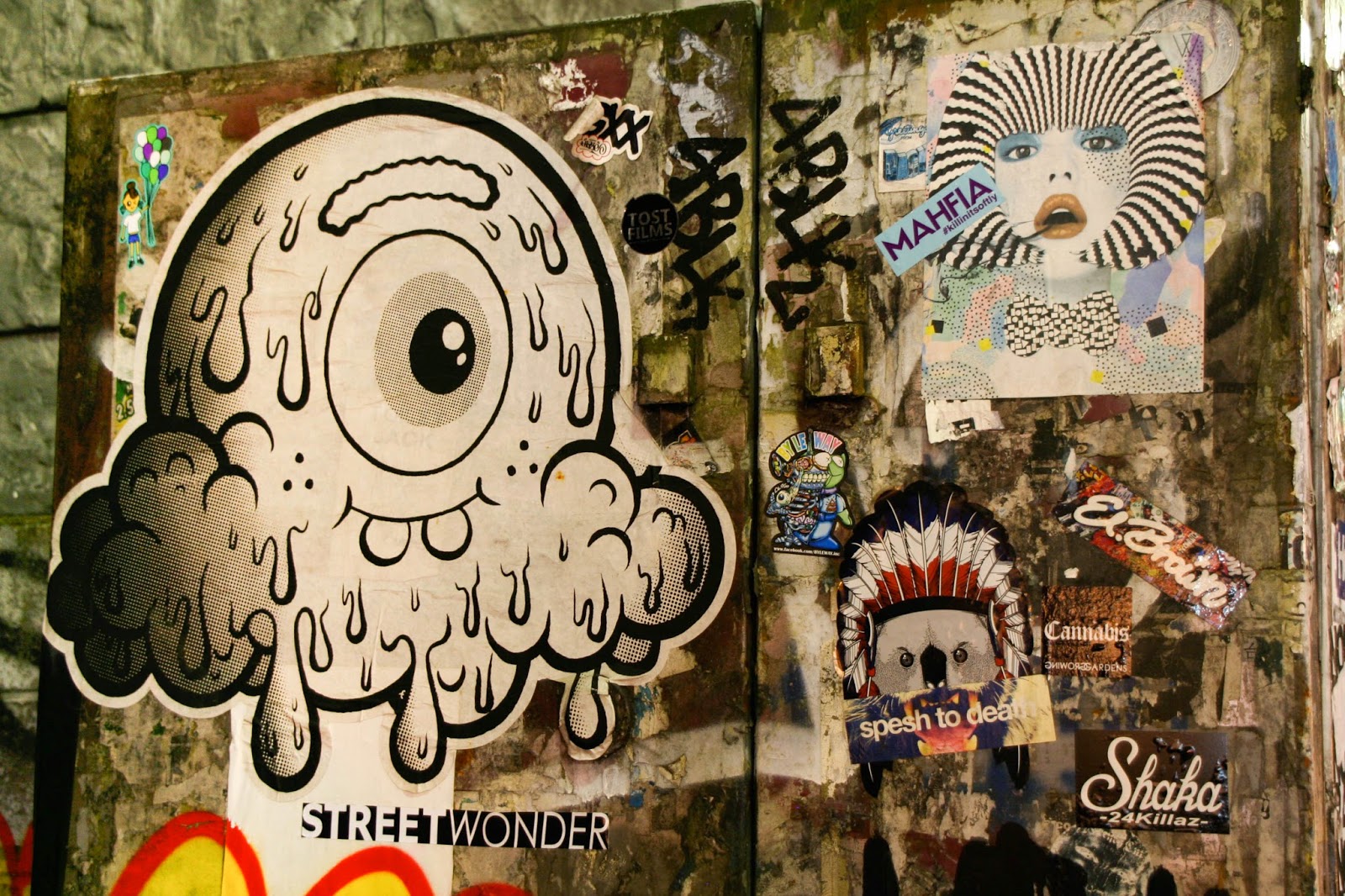 I took a picture of this same patch of street art last year... the koala is still there at least. 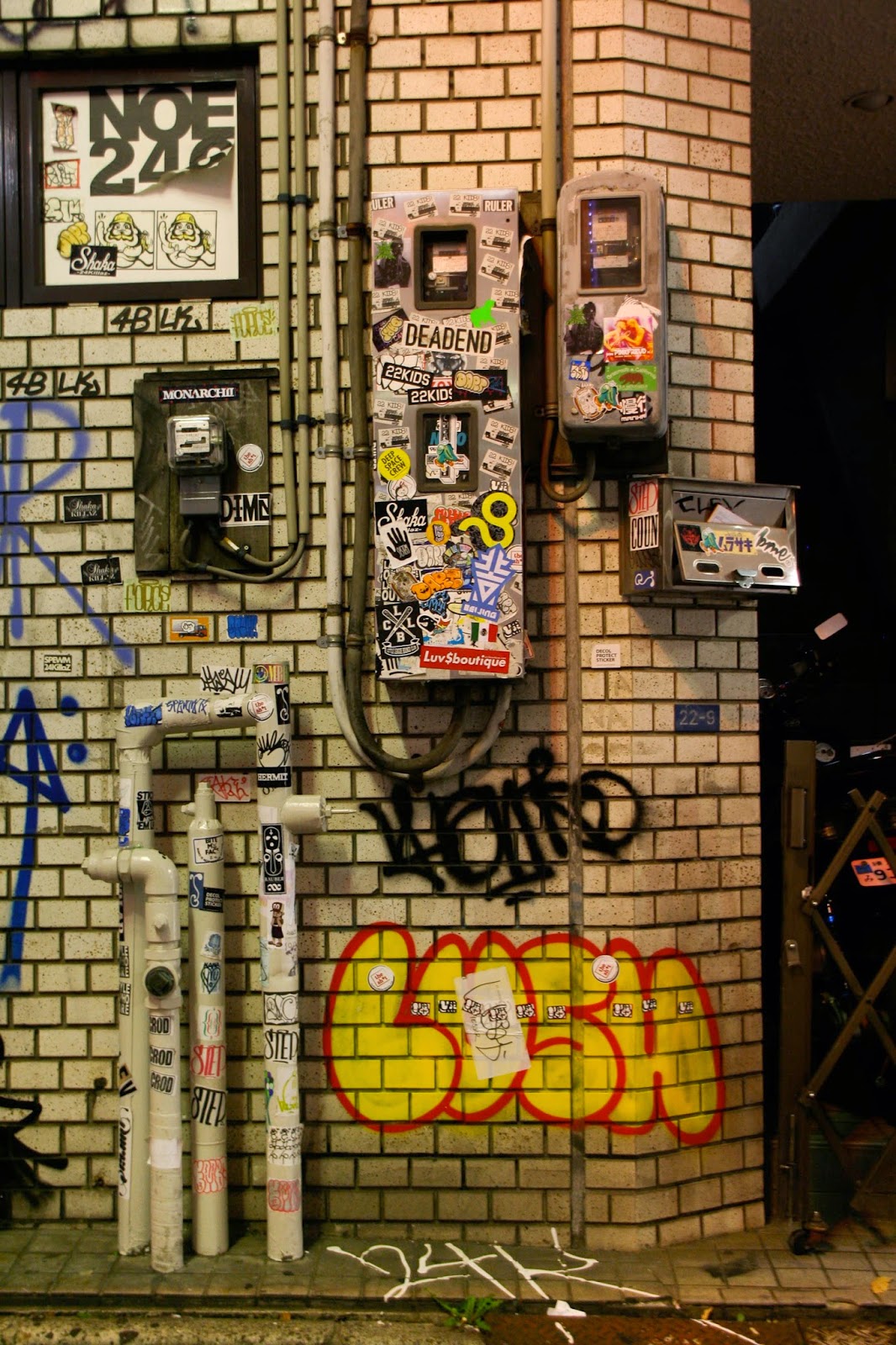 The street art is pretty well confined to these little, high density pockets. 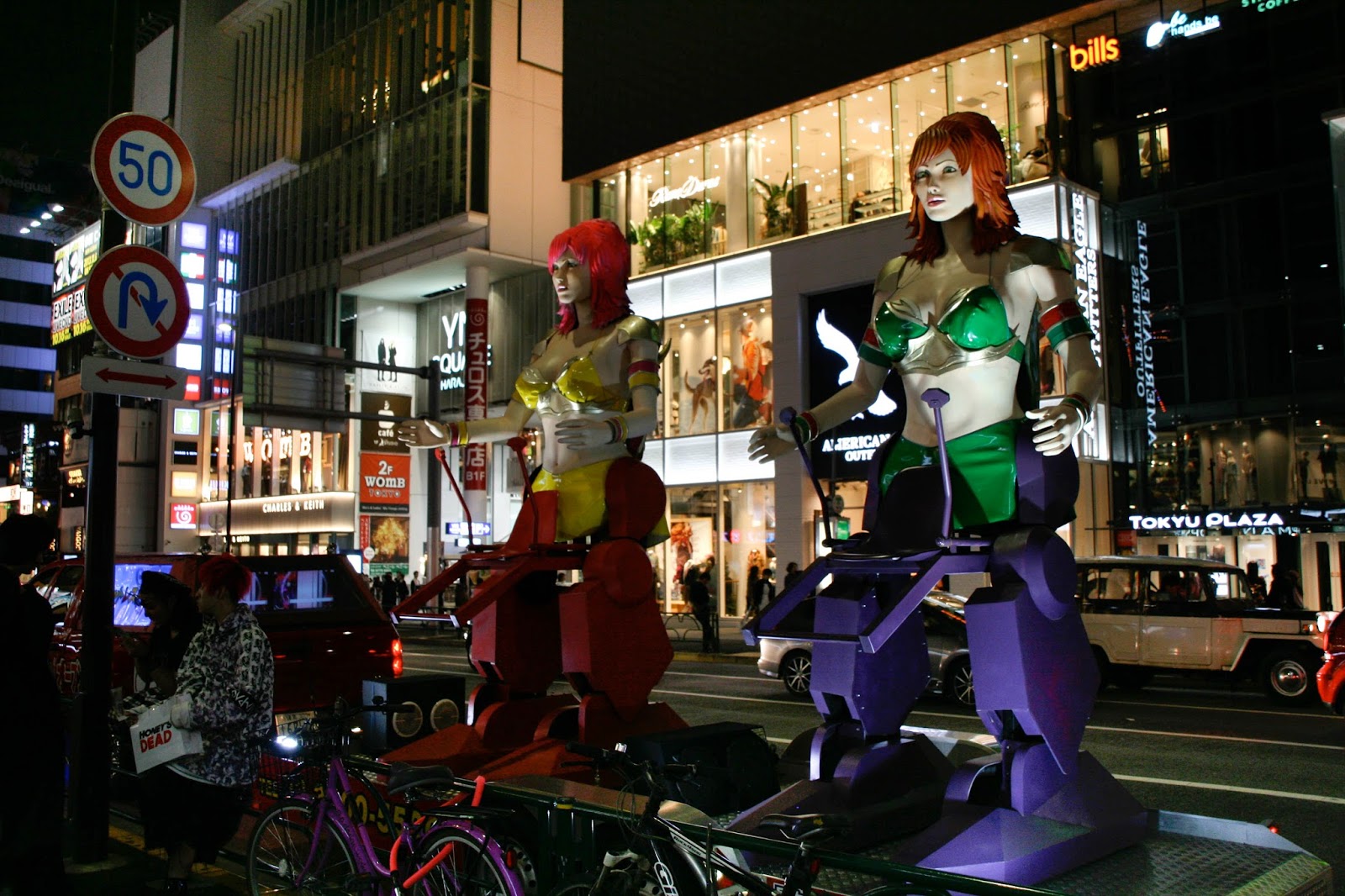 I have no idea what the hell was going on here.... oh Tokyo. 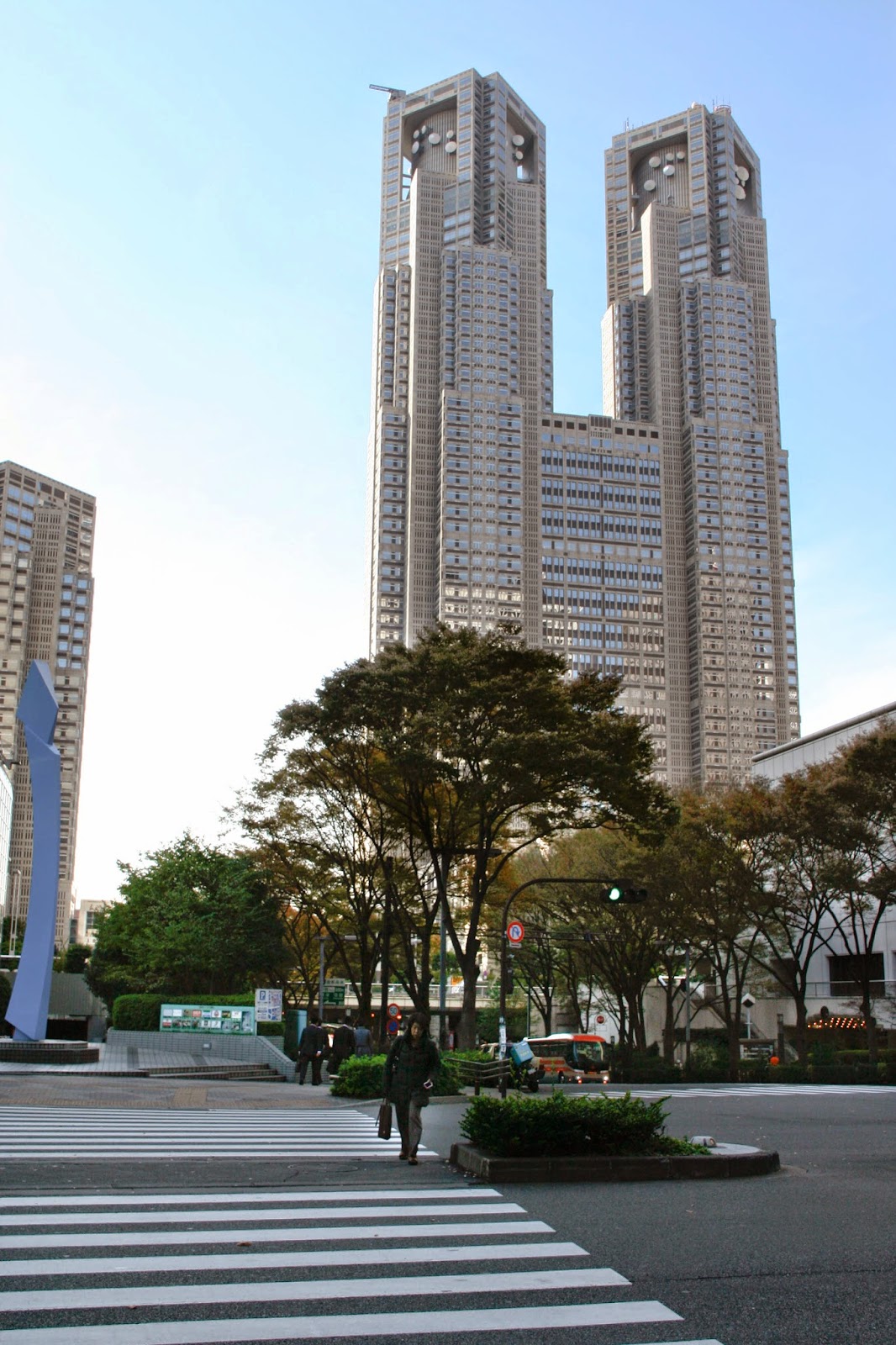 Last stop of the trip was the Tokyo Metropolitan Government Building... city hall.  The building, really a complex, is huge and quite futuristic looking, and I also found out that it also has a great (and free!) observation deck on one of the highest floors. 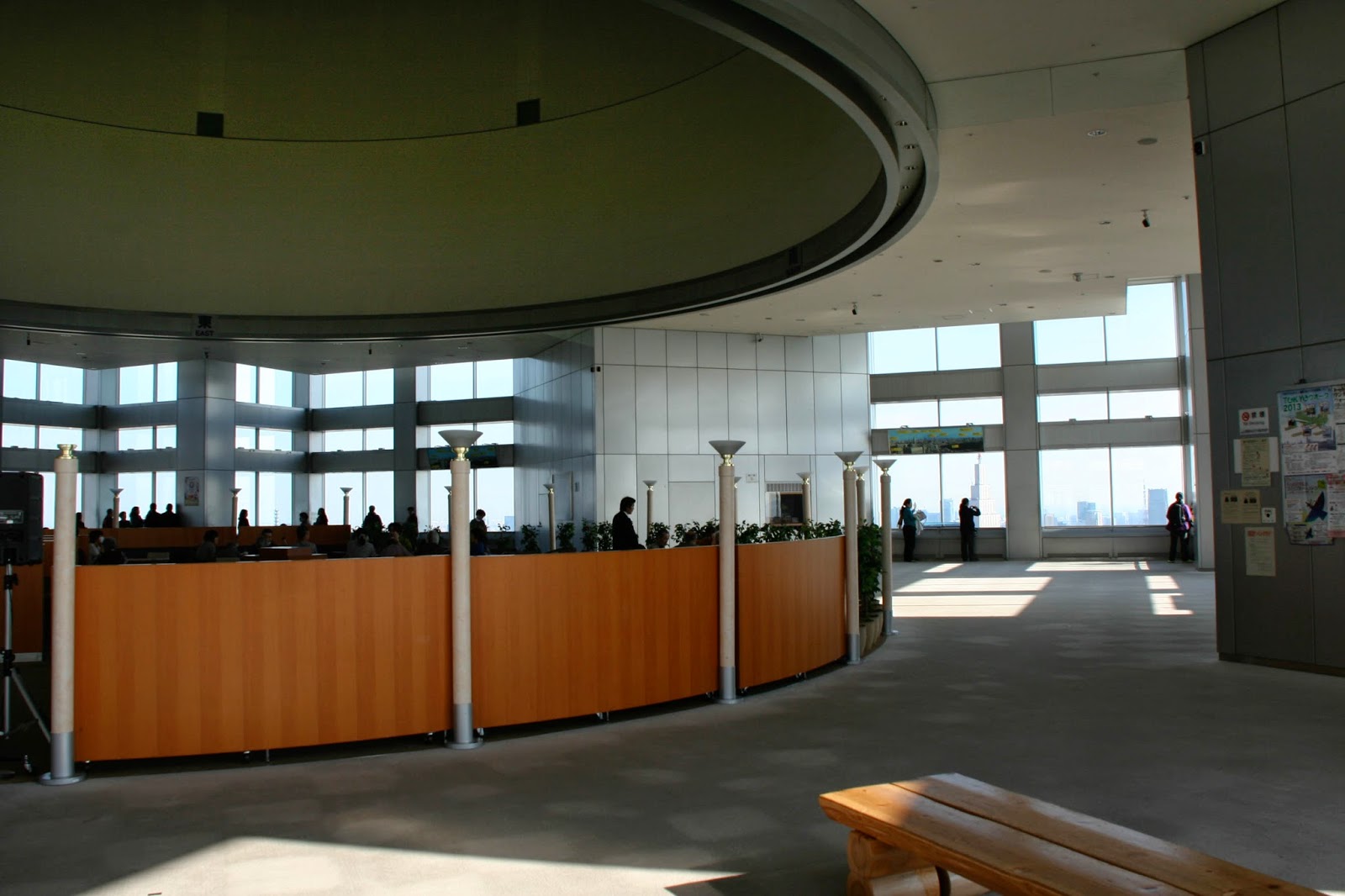 Up in the Tocho (nickname for Tokyo's city hall) observation deck.  After an ear-popping elevator ride, you come out into this swanky area... you can even get a drink or snack at the little cafe in the middle. 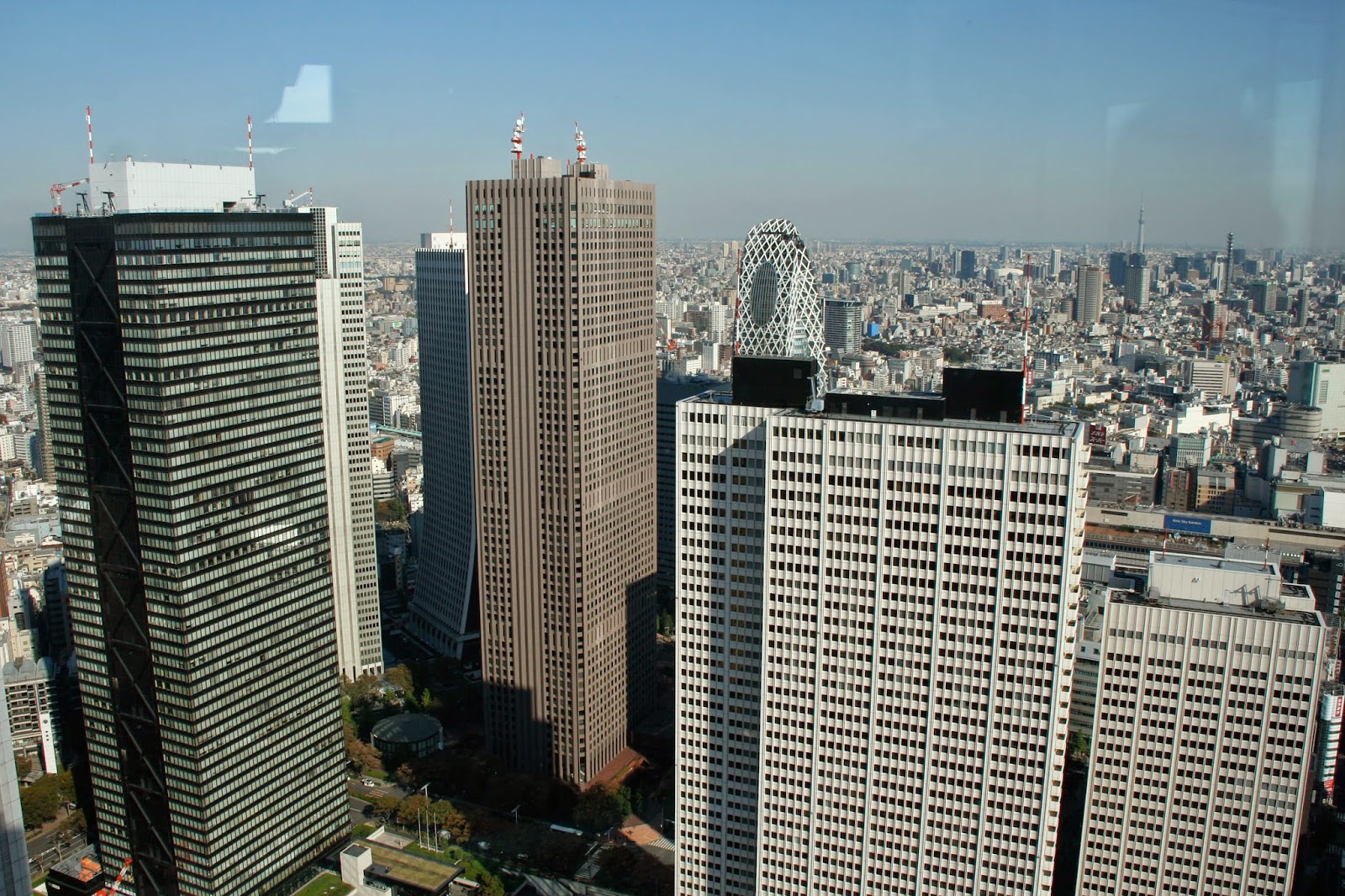 The great thing though are the 360-degree views around the city.  Tokyo stretches as far as you can see in every direction.  In the distance here, the Tokyo SkyTree is visible (back right). 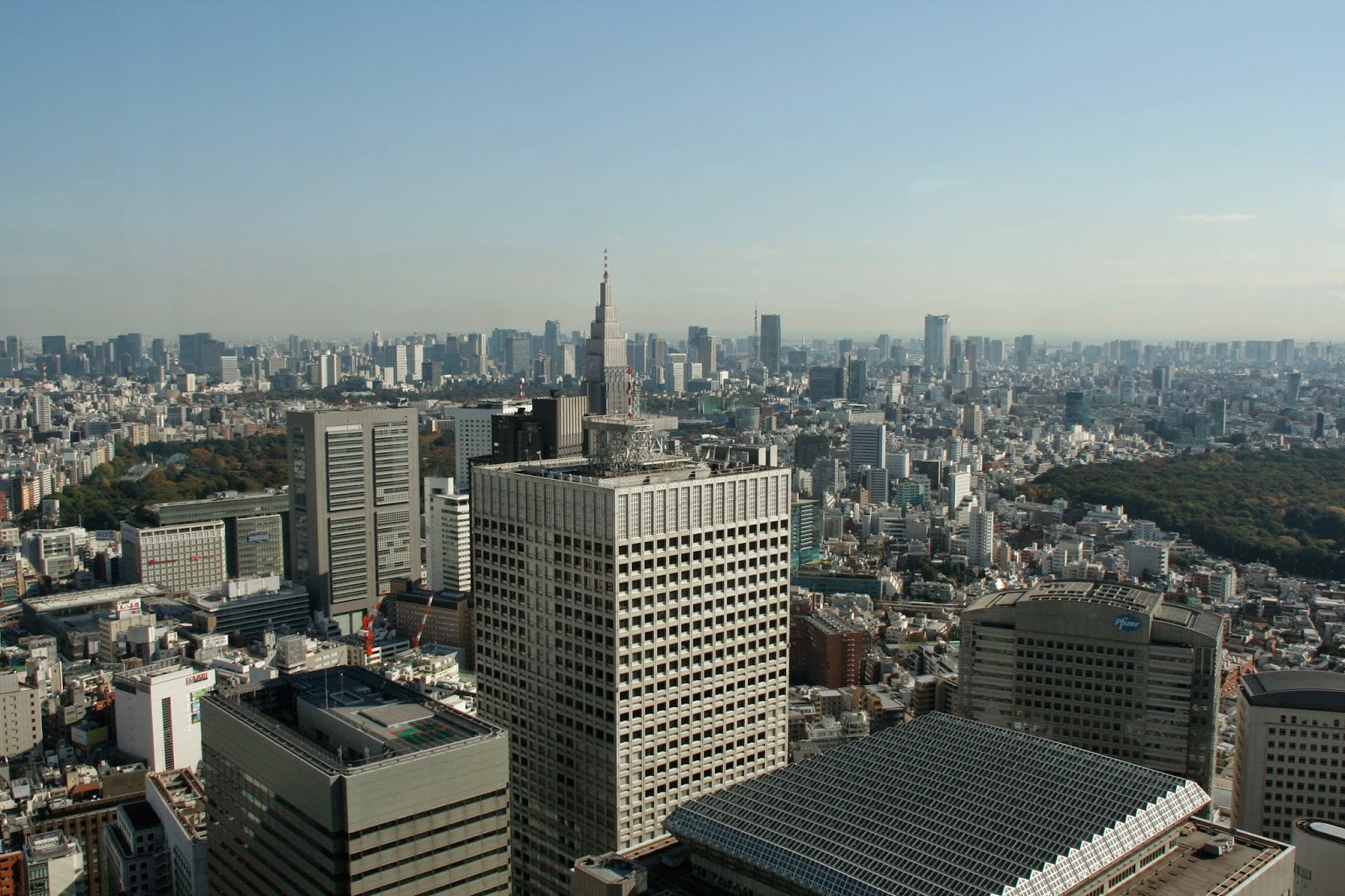 Here is Tokyo's imitation of the Empire State Building: the NTT Docomo Yoyogi building, which also features an enormous clock face.  Also visible in this picture is the Tokyo Tower (center distance) and the Meiji-Jingu park. 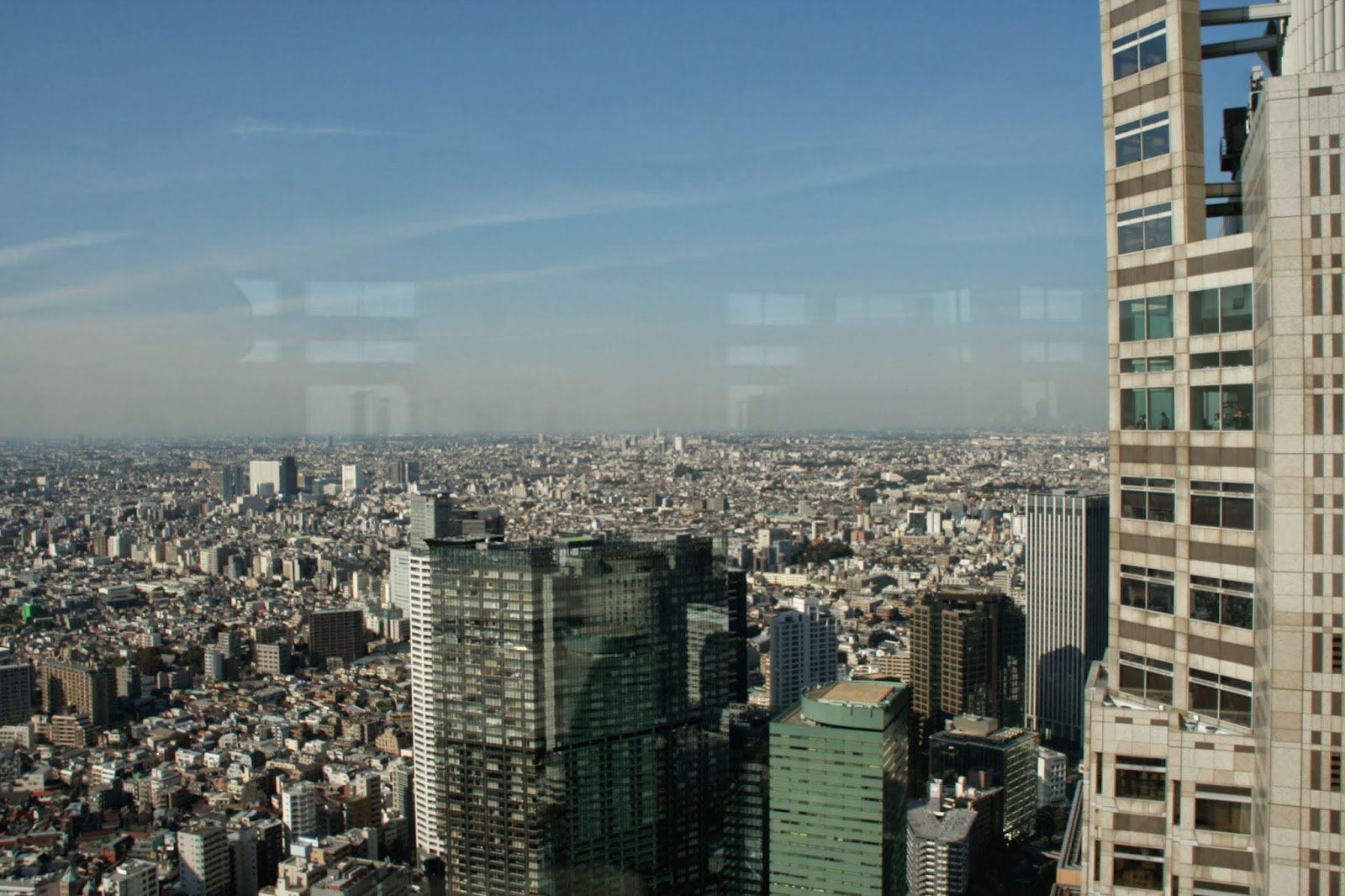 Looking towards Mt. Fuji... it was a smoggy day, so the giant volcano wasn't visible unfortunately.  Ironically, the smoke stacks from the power plant in the distance were though. 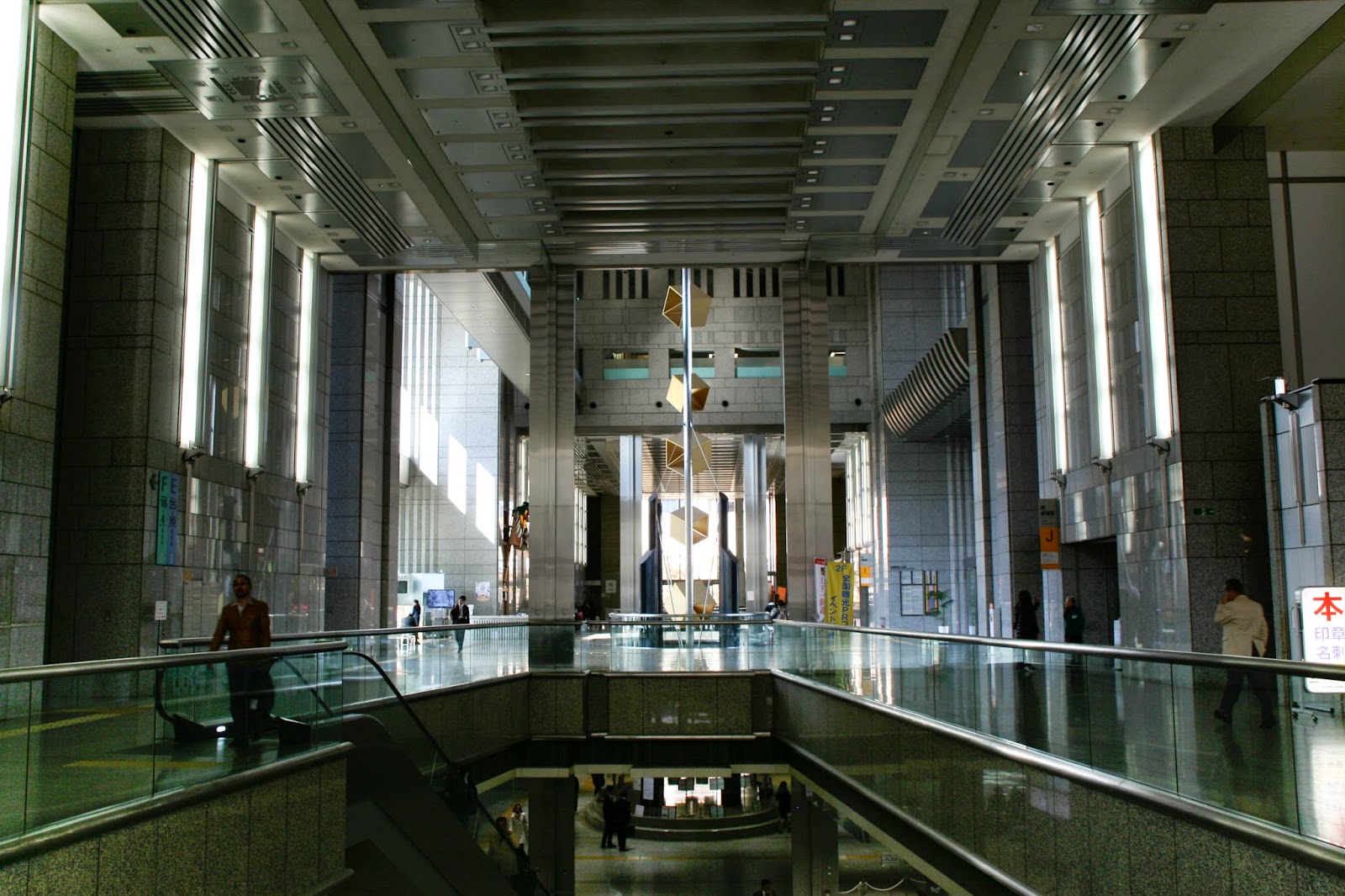 Tocho's futuristic looking lobby.  I felt like I was in a Borg cube or something... 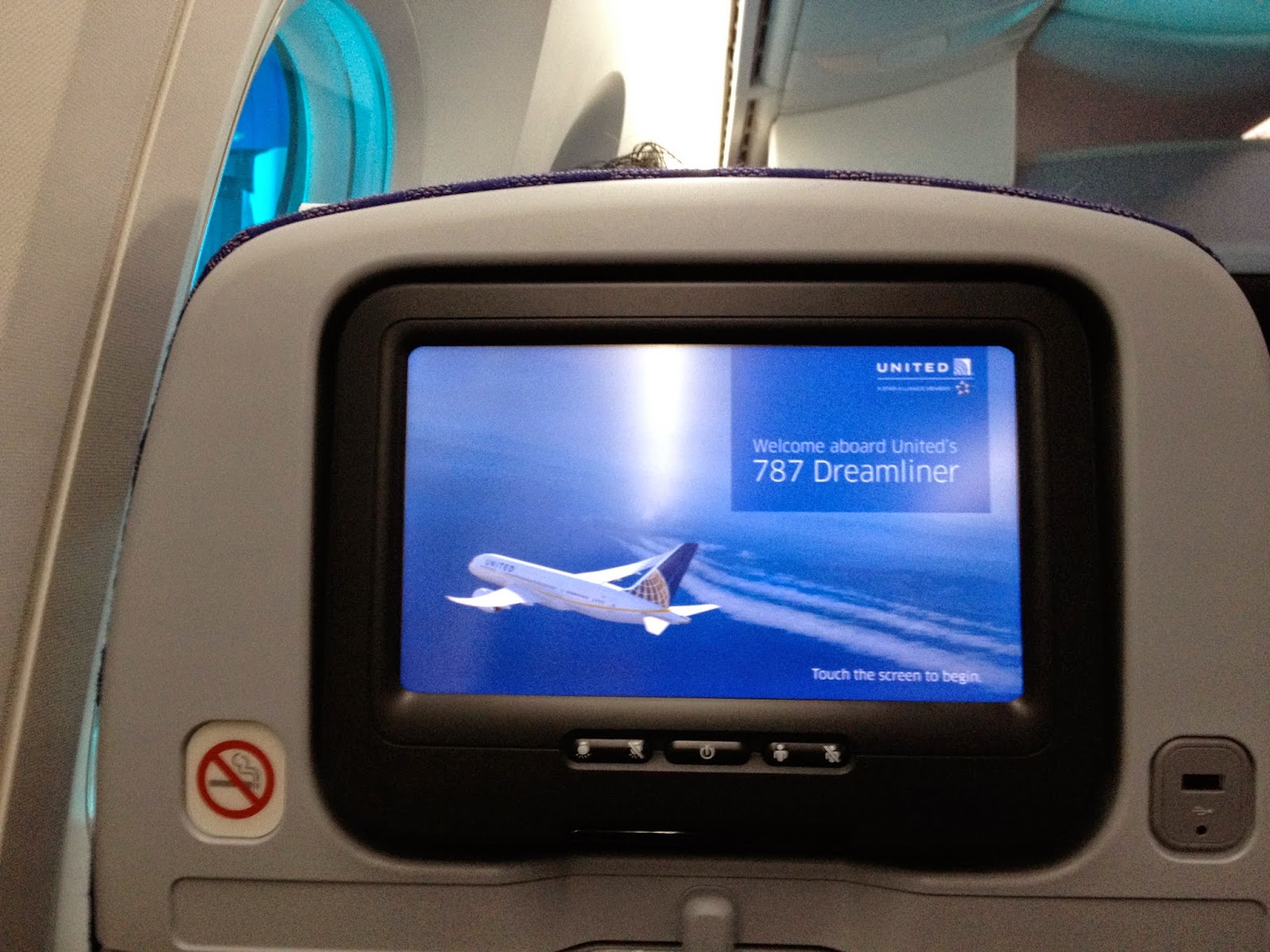 I was lucky to fly in the 787 both to and from Japan... it was an awesome airplane, very comfortable and quieter than most, and the increased humidity in the cabin was noticeable.  I particularly enjoyed the electronic window shades too...  good times.
Posted by Drew at 10:24 PM No comments: