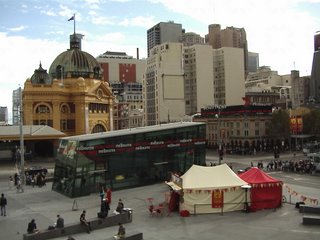 This one needs some blowing up too to really appreciate that I was trying to get the building in the middle (with Melbourne written all over it) as the intro to this next post. anyway, here I am in Melbourne. I have met up with my Aunt Susan, who is here on business. She has been incredibly nice enough to let me stay with her in the Grand Hyatt Hotel. After hopping from dorm to dorm for the last month and a half, this is a HUGE relief and has totally recharged my batteries! That may be one of the reasons why I have taken such a keen liking to this city after my first day of walking around...but who knows! The city has really appealed ot my taste and I really like it so far! Anyway, hopefully my excitement comes out in this post...Melbourne seems to be an amazingly beautiful and truly unique city! And thanks again Aunt Susan for letting me stay with you and everything else...meeting up with you and being here in Melbourne has already become one of the highlights of my trip!!! 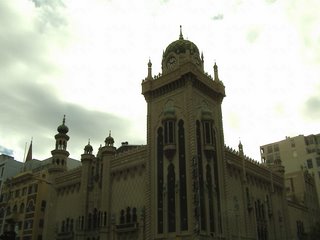 One of the many amazing buildings in Melbourne. The city has combined very old, European- style buildings with those that are very modern and unique as well. The city designers have done it in a flawless way though that appears so natural. Its really hard to describe, but it is such a cool feeling to have such incredibly different styles together everywhere you look. 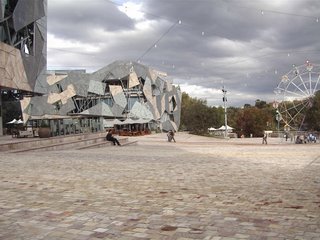 This was in this beautiful (and much bigger; it is the upper level to the square seen in the first picture of this post) square down from city center, close the river. The bricks on the ground had an incredible pattern to their colors (which of course didnt turn up in the pic) and the crazy looking building in the background is just a small part of an even bigger and crazier looking building out of picture to the left. There was also a park behind the square (see ferris wheel and trees), a huge video screen showing live views of the square itself (the kids just loved dancing around and watching themselves in it), and a massive underground information center (with amazingly helpful and resourceful staff). This city is really amazing...its uniqueness, individuality, daring, and inginuity have defined a whole new standard for what I will now hope to find in other cities. 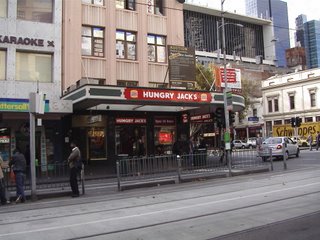 Ok, this is another one that takes some zooming in...or you can just take my word for it. So Burger King....first off, I'd like to point out that it is an English company (from England that is), not American...which was news to me. Secondly, I have so far seen them in England (of course), Fiji (yes...and McDonalds too...so sad), and New Zealand. Strange thing is, that when I get here to Australia, I see the ever familiar Burger King "burger sign," but instead of reading Burger King, it reads Hungry Jacks. Why Hungry Jacks and not Burger King?? I do not know, but supposedly it only goes by that name here in Aus...weird, but true. So yea...just wanted to throw that random bit in there. 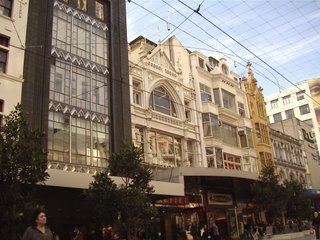 Some of the awesome architecture lining the Bourke St. Mall. Bourke St. has some of Melbournes best shopping and is a pedestrian and trolley only street...kinda cool I must say. Any shopaholics beware...Melbourne is a dangerous city for people like you, for your bank accounts that is. 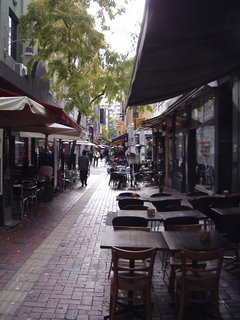 A little pedestrian-only side street (just off of the mall) with a ton of cafes and quirky shops...these yet another reason why Melbourne is such an awesome city. Melbourne is famous for its cafe lifestyle. People watching here over a cup of coffee is practically a way of life. So after the market (see further down), I decided I needed a... 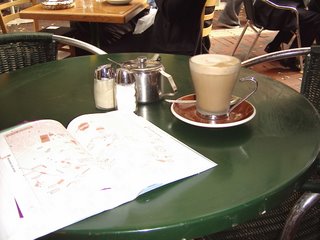 coffee break: some time to reorient and plan for the rest of the day using the Rough Guide.
Oh and the coffee was really, really good too. 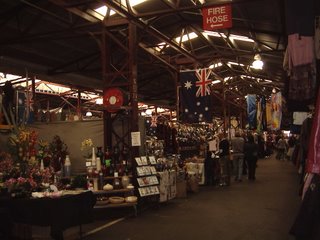 Inside the Queen Victoria Marketplace. I spent the first half of my day wandering the endless rows of merchant's stalls in this massive market. It is only open Tues, Thurs, and weekends, but easily holds some of the best bargains I have found in Oz (Australia) yet. It is part flea market, part food market, part clothing outlet, part art show. The place is huge and the prices are great! It is a bargain hunters form of heaven for sure. Even I got into the shopping mood, which for me is quite rare! 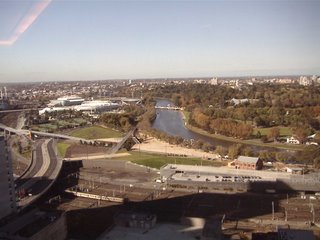 View from the Hyatt (Aunt Susan thank you soooooooooo much again...you are amazing). That is Melbourne's Yatta River with some of the sporting arenas to the left. On the far left, you can just make out the lights of the MCG (Melbourne Cricket Grounds), which is the local stadium for major sporting events such as cricket, Aussie rules football, and my favorite, rugby. I'm hoping to possibly catch an Aussie rules game there Friday night...no guarantees yet, but we shall see. 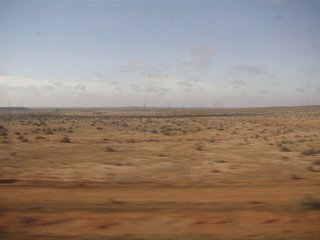 Ok, so hopefully at this point you are saying to yourself, right I don't quite think that is in Melbourne. If you are (please, please I hope you are), then you are very correct. These were some pictures taken from my 37+ hours of train rides between Sydney and Melbourne. This was taken between Sydney and Broken Hill (an Outback town)...please see a map for location as I am too lazy at the moment to put one up. Anyway, so this just shows the vast, surreal, and very dreamlike state of the Australian Outback. And supposedly, this is nothing yet. My trip to Alice Springs, dead smack in the middle of Oz, will reveal even more of this vast, flat, dry landscape to me. The only real way to describe it is like something out of some amazingly surreal dream. What really does it are the ways that the blue of the sky contrasts with the reds and reddish browns of the earth and also, how the clouds are at such low altitudes. You really must see it to understand; as always, pictures = no justice to the real thing. High note, I also saw my first wild kangaroos and emu...about a dozen, hopping (as opposed to the lazily lounging, zoo form) kangaroos and one lone emu from the train! It was awesome, but I couldn't snap a shot as they were in the distance and we went by too quickly. 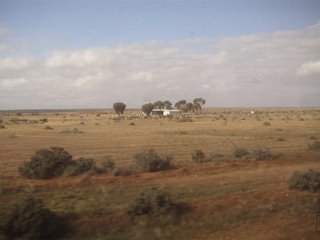 One of the few...but surprisingly there were quite a few... houses in the middle of knowhere in the Outback. What, other than extreme isolation in the middle of a desert, these people are looking for by living here...I cannot say. It is so wild; there are these lonely dirt roads leading off beyond the horizon to who knows what kind of Outback town, which must serve as the only lifelink to these people for food, water, gas (because without a vehicle of some sort, there is no way these people could survive, and we all know vehicles need gas), and lets not forget medical assistance. I would LOVE to meet someone that lives out in one of these places to ask a few important questions such as: what do you do for a living? do you get very lonely? what do you do for social interaction? what do you eat? what do you do for entertainment? My mind has already come up with several answers to each question (I mean come on, with thousands and millions of acres of desert, it's easy to think of some things to do right?!?), but I would love to hear some real answers from someone who really lives out there...as I said, wild.
Posted by Drew at 10:39 PM

How are you doing all of this? Do you have one of those "time-turner" things from Harry Potter? And you are managing to write cards, emails and this Blog on top of everything else!!! The rest of us can barely keep up!!!
Thank you ~ for all of this ~ and for being you. Loads of love, Mom

If any traveller has not yet visited Melbourne, then he must plan to visit this great city in Australia.
meet and greet at stansted