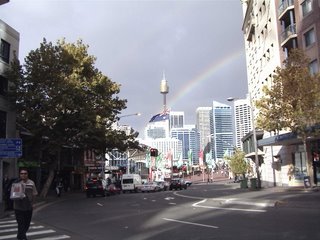 Hard to make out...but this was just too beautiful and perfect of a shot to keep out. That is a rainbow with Sydney's sky tower inbehind and a massive Aussie flag over Darling Harbour (I'd recommend copying and pasting into a photo editor to zoom in). 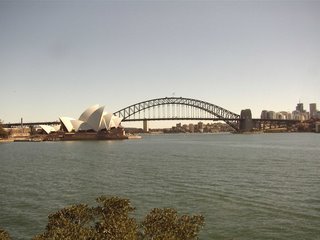 Here is your stereotypical shot of Sydney...the Opera House and Harbour Bridge from a place in the Botanical Gardens called Mrs. Macquarie's chair. Mrs. Macquarie was a wife of one of the governors of the then penal colony of Australia. The Botanical Gardens (which are MASSIVE) were used as their private garden, and Mrs. Macquarie enjoyed going out to a bench cut into the rock at this point jutting out on the harbour. I must admit, she had great taste...the views of the harbour from there were absolutely stunning. The water is a deep and vibrant blue and the city (which wasn't really there then) is still quite green...beautiful. 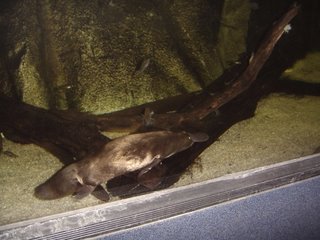 My new second most favorite animal: the platipus. Dolphins would still be first. 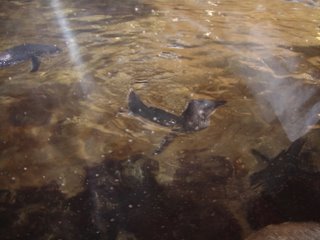 For Missy and Shona, Little Penguins...the smallest (and cutest) type of penguin in the world!!! They were awesome and quite active in the water. The Sydney Aquarium was a great experience overall...definately a must do in Sydney. 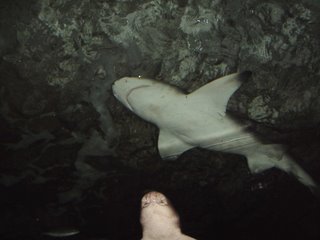 Sharks at the Aquarium...oooo scary! 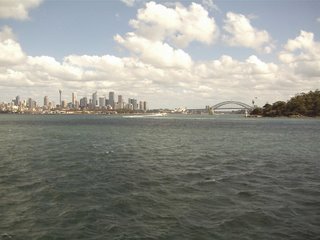 One of the many spectacular views from the ferry ride out to Manly Beach. These views alone were worth the Aus$12 for the trip...the amazing beach and chill town at the end of the ride are just added bonus! 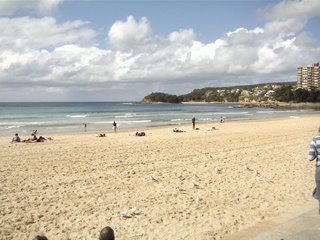 Manly Beach. This place is my kind of place...beautiful beach, clear and warm blue waters, and great surf, which is why I am returning there tomorrow actually. Manly Beach was named by some early explorers when they saw some very masculine looking Aboriginees on the shore there. Weird eh? Anyway, the beach is spectacular and the town is really cool too. Lots of surf shops and tons of souvenir places but also many cafes and diners too...all with that relaxed surfer atmosphere...very cool. I even got to see a genuine didgeridoo-off in one of the stores! These two guys were taking turns rocking out on the amazing instruments, both trying to outdo each other with the deep, harmonic sounds...sooo cool. 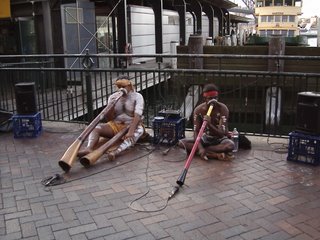 Here were two guys jamming out on their didgeridoos at Circular Quay. They were playing the traditional sounds on the doos, but in the background was a very modern drum and synthesizer beat...it was an awesome combination. I sat and enjoyed them for quite sometime...hard to believe that such an amazing sound can come out of a piece of eucalyptus tree that has been hollowed out naturally! I will definately have to buy one of the many Aboriginal music cds before I leave here...I love the trance like feel to the music (the good relaxed kind of trance, not the drug induced, epileptic kind). 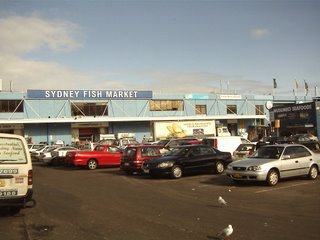 Today I wandered down to the Sydney Fish Market, which is the second biggest in the world after Tokyo's. It was unreal how many fish and other sea creatures were on display inside...all diferent colors and shapes and sizes! I also had some amazing sushi here...so fresh and sooooo good.
Posted by Drew at 11:22 PM

Oh man, I'd do back flips for sushi right about now.

I would imagine that would be the freshest Sushi one could have. I hear the weather is a bit cool there but who cares ! These are amazing stories Drew...thank you for taking the time to share them with all of us!

I can hear you saying what I read. Sounds like lots of fun. Keep taking pictures. Are you going to stop in Canberra? If so, take some pictures of the 70m there. Bon voyage.

Great pictures, Drew. Glad you are getting some sun, surf and relaxation in on this trip! We are always thinking of you and rooting for you... With love!