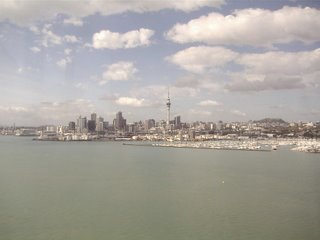 So have I ever mentioned that I love New Zealand???
Today was an awesome day. I woke up and the sun was shining, which was nice after the rain all day yesterady, and even better considering I had signed up for a free city tour.
So this company called Stray is pretty new and they are trying to get their name around. They are a bus company that takes visitors around NZ and Aus, stopping at the major hot spots. Since they are new, they are trying to get their name out there and they provide a free Auckland city tour...I must say, I am impressed.
Auckland reminds me a lot of Toronto and New York in that it has the feel of the biggest city in the country going for it. Everyone is tres chic and running around at high speeds, but NZ still has passed its pleasant feeling to it in subtler ways. First off, it is possible to cross the main drag, Queen Street at places other than crosswalks. Try to do that on the main streets of TO or NYC...I dont think so. Just little things like that.
The above picture is from the tour when we crossed the harbour bridge. The tour guide loved to chat about the various marine wild life that they get in Auckland harbour...from whales to dolphins to great white sharks...yes they come to the waters here to give birth! Craziness. 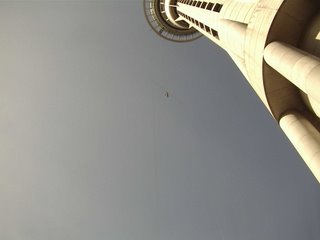 First stop on the tour was the Sky City needle (this isnt even one of the reasons it reminds me of TO though). These crazy Kiwis have places to do pretty much any extreme sport you can name, and more. The tiny blip in this picture is a person jumping off of the tower...but no need to fear ladies and gents, they are safely supported and controlled in their 170+ meter descent by a system of cables... I'm saving my money for the bungy jumping personally. 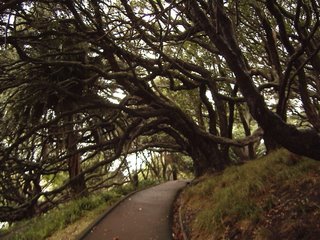 This pic was taken in Albert Park. It wasnt on the tour, I found this one on my own wanderings yesterday. It was really cool with the trees...felt right out of Lord of the Rings. 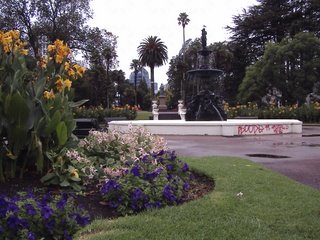 Garden at the top of the hill in Albert Park. 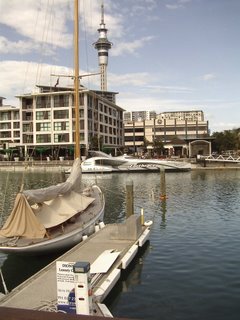 400,000 Auckalanders sail...thats almost half the cities population and nearly 1/8th of Kiwis total in NZ. 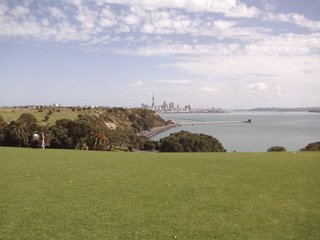 This was one of the Maori lands in and around the city. It was called Whenua Rangitira, and was much more beautiful that the picture can convey. There was also a monument up here for the first Labor Party Prime Minister, who, much to the discomfort of the Kiwis, was an Aussie. 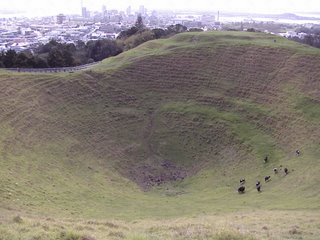 This is the crater of one of the volcanos in and around Auckland (as you can see it is quite dormant). Notice the cows down inside...I thought that was hillarious. 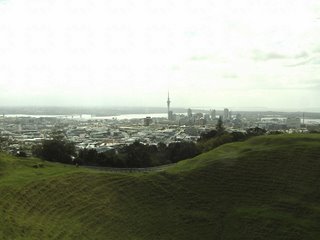 View from the peak of the volcano, Mount Eden. 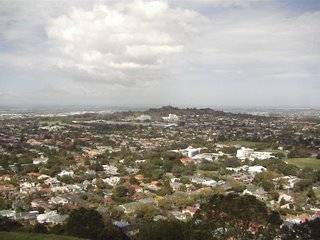 Another view (looking away from city center) from Mt. Eden. Once again, this tour was awesome!