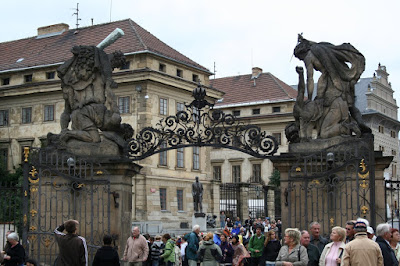 The Czech Republic, our next stop on our trip. These are the gates going into the old royal palace complex. Interesting statues, eh? So at this point on the trip, we were 4 for 4 on countries royal palaces: Buckinham Palace in the London, the Royal Palace in Stockholm, Wawel in Krakow, and now Prague. 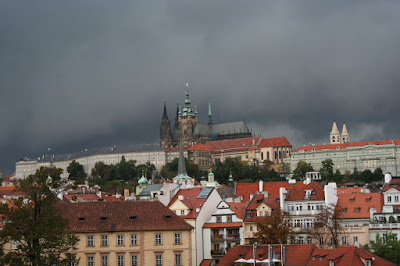 Storm rolling in over the Palace Cathedral that overlooks all of Prague. 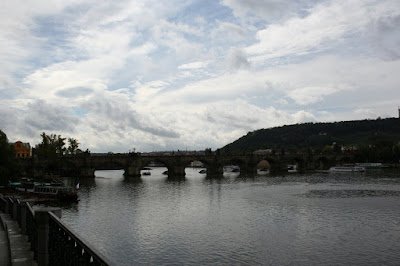 The famous Charles Bridge. A pedestrian only, statue lined crossing that is immensely popular with the throngs of tourists in Prague. It was an amazingly beautiful city, but there were far too many tourists. Most of the locals seemed quite rude and uninviting as well, but I'm going to blame that one on too many tourists also! 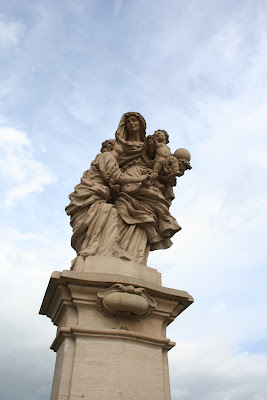 One of the few white stone statues on the bridge. Most of the stone around Prague has turned black from oxidation effects, which really add to the creepy Gothic feel of the city. 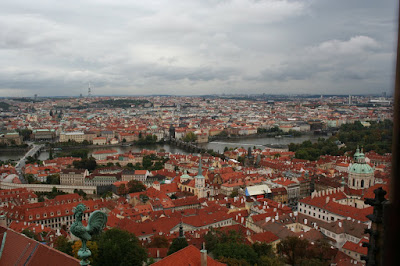 View down over the city from the Palace Cathedral. The Charles Bridge is the one in the middle. You can see Prague's market square's main structures with the black roofs in the center left of the picture. Also, in the far distance stands the media tower covered with alien babies. I'm not joking, they have these creepy little baby statues crawling all over the tower. Really, really weird. Mattias first told us about these, and until we actually saw it, we just figured he had drank way too much absinthe (or just the right amount) the last time he was in Prague! 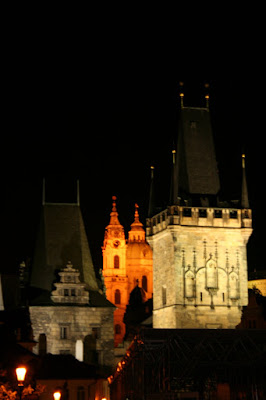 They light the buildings at night...absolutely beautiful. 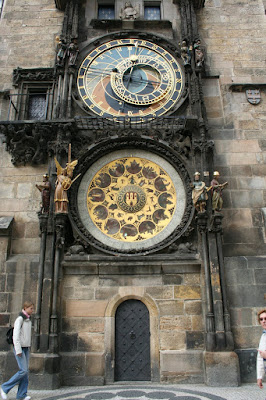 The astronomical clock on the old city hall tower. This is one of the most popular tourist spots in the city...there is ALWAYS a crowd around this. I had to stand with this in frame for at least five minutes to reduce the number of people in the shot to 1.3 (seen here). Now, no trip to Prague is complete without seeing the clock show at the turning of each hour! Just watch out, the tourists flock here in droves, speaking what seems like an infinite amount of languages and being as rude as humanly possible to you since you are just as annoying to them as they are to you! Also, try to avoid getting stuck behind the tour guided groups. These are easily distinguishable by their tour guide who almost always walks around holding up a brightly colored umbrella, even if there isn't a cloud in the sky. These groups move at inhumanely slow rates and somehow, once they are in front of you, they always manage to stay that way (aided greatly by the small, narrow streets of Prague). 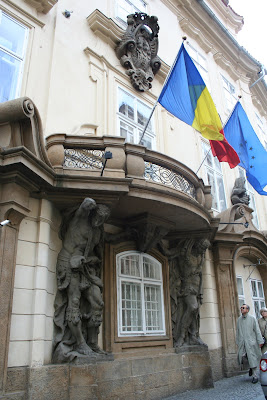 One of the many embassies on the way up the hill to the Palace. This one is Romania's. Note again the lovely statues framing the window. Interesting, these Czech architects... 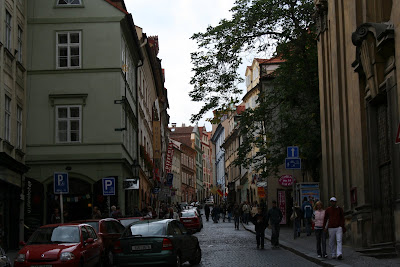 A typical street in Prague. The buildings are beautiful EVERYWHERE in the central city...it is unreal really to think about it while you are there. They have done an amazing job preserving everything the way they have. But I suppose with all of the tourist money pouring in to see block after block after block of beautiful old buildings, it is quite important to keep them beautiful. 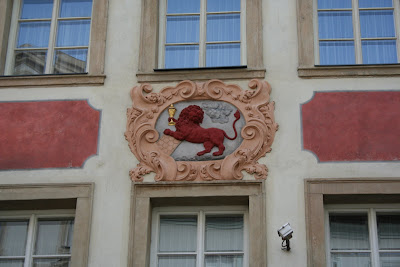 Some of the houses and buildings have these little decorative signs on the second floor above the door. Each is different and supposedly they were used back in the day to signify what kind of business was operated within the building. This one was for the Red Lion Bar....hence the red lion holding a goblet and resting his arm on what appears to me to be a bar! 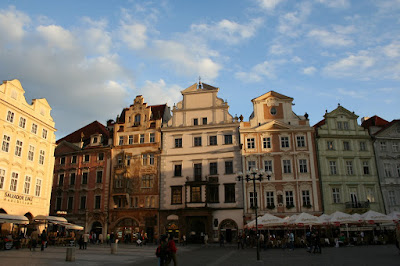 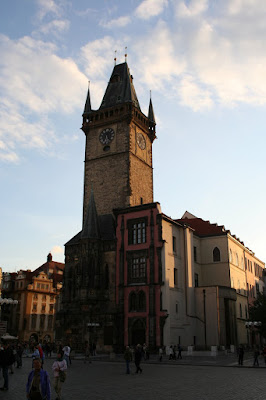 The old city hall tower. Notice how the right side of the structure looks as though it used to have more attached to it that was simply ripped off? It wasn't ripped off, it was blown off...by an Allied bomber suffering from a bit of mistaken city identity in WWII. Sad, but cool story. At least he didn't take out the astronomical clock...I don't know what the world would do without it! 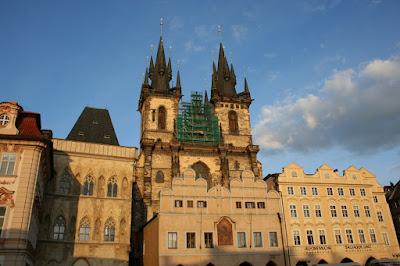 The Cathedral at the market square...AKA: Dracula's Castle. No seriously...look at the thing! It's especially terrifying at night when they light it with small orange lights in each of the towers' turrets. Unfortunately they were renovating while there...which took a little of the terror out of the structure, but not too much. Now, why the Czechs built those buildings directly in front of the cathedral, I do not know...perhaps as an additional barrier between them and the vampires. 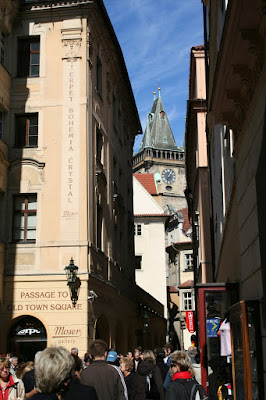 Prague is a literal maze of small back streets, corridors, alleys, and buildings standing directly in the way in which you would like to go. We were there three days and I think the only one of us that had any idea how to get from point A to point B without a lot of time wandering aimlessly, trying to stick to one general direction while saying "We are in the approximate vicinity....aren't we?" was Mattias. It was his 3rd or 4th time to Prague. 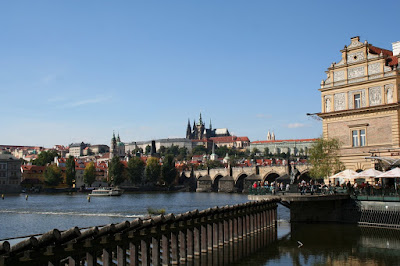 View across the river at the Charles Bridge and the Palace Cathedral. 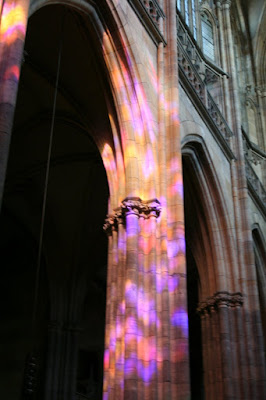 Light patterns from the stained glass inside the Palace Cathedral. 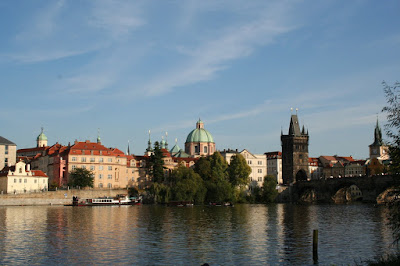 View looking back across the river (from the Palace side) at the Charles Bridge and riverside skyline.

I loved Praha, I was there for Christmas a year ago. It's one of my favorite cities.

Over 600 years old, Charles Bridge is the oldest bridge in the city. Thirty statues of saints line the bridge. It seems like all roads lead to Charles Bridge, meaning all tourists seem to end up here at the same time each afternoon, making the bridge at times the place NOT to be if you have an aversion to crowds not to mention a dream to pickpockets. But early morning or in the evening the bridge can be a magical place to visit. We spent a couple of hours standing near the bridge one evening, waiting for the sun to set to try and take that elusive night shot of the bridge. Restaurants and Prague hotels which are situated close to this bridge is the most expensive in the city. Day & night, from far away or on top of it this bridge looks great and is car free. Yet best to cross it as early as possible unless you want to warm up in a tourist crowd. Do you recognize the scenes of Mission Impossible shot here?