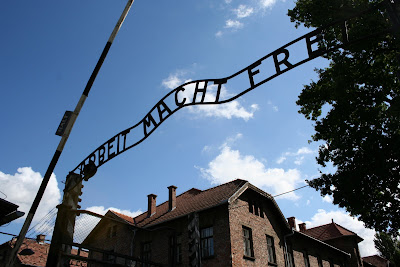 "Arbeit Macht Frei" translates from German to "Work makes (one) free". What ironic, Nazi bastard coined this slogan, I know not. These are the words on the entrance gates going into the camp known as Auschwitz I. Auschwitz is the German version of the name of the nearby Polish town, Oswiecim. We took a day trip to Oswiecim to see these camps, made so famous by the atrocities of the Nazi holocaust during World War II. This place shook me to my soul and brought me to tears several times. It also brought to mind a flood of questions. How could humans do this to other humans? How can one be so brainwashed to commit such horrors? How could one ever live with oneself after? How would it feel to be a prisoner here... 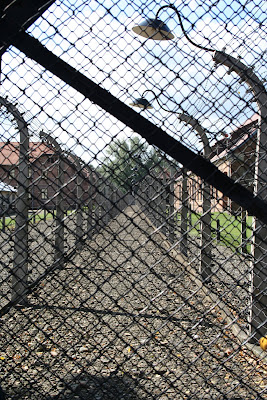 Fences surrounding the complex. They were electrified of course...and doubly reinforced with this death zone between. 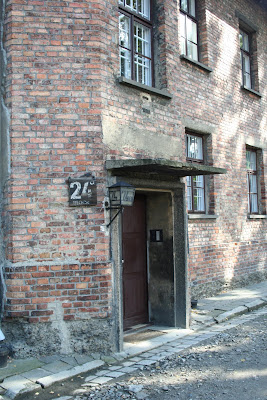 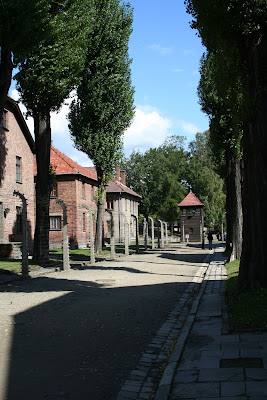 The camp is set up as a series of blocks, with guard towers at either end of the straight streets. These towers had machine guns at the top to handle any form of trouble in the streets they overlooked. 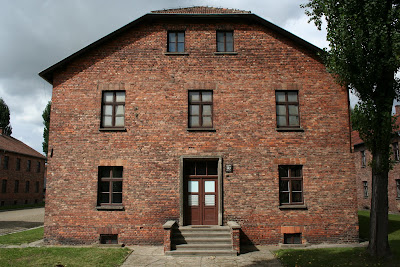 One of the buildings at Auschwitz I. All of the buildings looked like this. We were not allowed to take pictures inside the few buildings we were allowed inside of...this is for good reason. There are some remarkably chilling and horrible things to witness inside. I will not talk about them here...they are better seen in person. However, if anyone I know reads this, and knows they will probably never make it to Oswiecim to see inside the buildings first hand, you can ask me about what is inside. 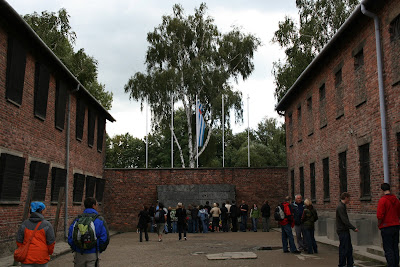 People gather around the shooting wall. Mostly women were lined up and executed here. There wasn't really a firing squad however, the prisoners, as well as the soldiers firing, were not given that "luxury". The SS soldiers obviously had no care for the life of the prisoners, so being responsible for their deaths must not have put much guilt on their souls, making a firing squad unnecessary, and grossly inefficient. The Nazi's actually came up with quite efficient forms of execution at these camps. For the shooting deaths, they learned exactly how many people lined up could be penetrated and killed by one shot from a Nazi rifle. This maximized the amount they could kill per bullet. These camps represented German efficiency at its utter worst. 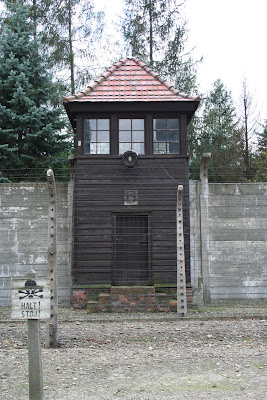 Guard tower "D". These signs were seen all over the camp near the fences, warning the prisoners not to get close enough to the towers to start any problems. Auschwitz I became the administration camp after Auschwitz II went into operation. It was here that the Nazi's first learned to use lethal gas chambers and crematories to exterminate prisoners and dispose of the bodies. However, the gas chamber and crematorium at Auschwitz I is nothing compared to the complexes at camp II. It must have been utterly hopeless to be a prisoner here, even though most had no idea of the mass extermination conducted all around them. Most prisoners thought that those being sent away were being transfered to other camps. This must be one of the major reasons why there weren't more major uprisings. Prisoners did their jobs, or they were executed as a display. It was only those the Nazi's deemed useless that were "transfered" to the gas chambers. An interesting bit of information here: one of the best places a prisoner could be sent was to the sorting buildings, where peoples personal possessions were sorted and sent out for various, monetary and efficiency reasons. These sorting buildings were known throughout the camps as "Kanada" and were so called by the prisoners because they knew that working here was one of the safest jobs in the camp (the work was indoors and relatively easy to do). They related this to what they knew of working in Canada; it was safe. So the name stuck and was even used by the Nazis themselves! 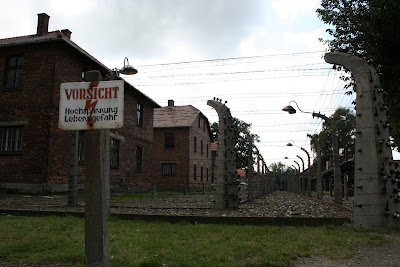 This electric fence warning was on the outside of the fences...warning Nazis of the extra-lethal nature of those barbed wire lines. The prisoners were given no such signs inside...just the skull and cross-bone ones near the towers, which I must add are quite unnecessary. As a prisoner it would be quite obvious that the Nazi guard tower, equipped with SS soldiers wielding machine guns and no qualms about firing them, behind the barbed wire fences were quite deadly. 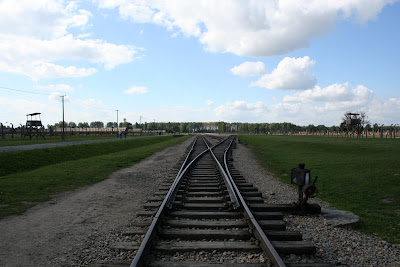 Auschwitz II: Birkenau. The execution camp. On either side of this railway are where the prisoners not yet ready for execution were kept. These prisoners were used for labor until they could no longer do so, then they were sent to the other end of the tracks. Those prisoners, mostly women, children, and the elderly, that were judged unfit for work were kept on board the death trains and sent directly to the end of the tracks upon arrival. At the time, they had no idea where they were being sent to, they probably thought that they were meant to be used at another camp. Those prisoners doomed to work behind the gates however knew that that track didn't go to far before it quite literally dead ended... 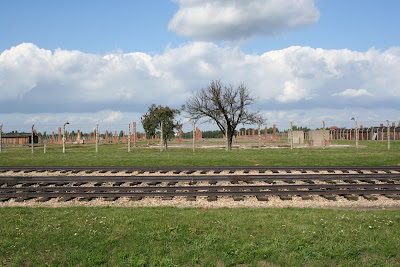 Most of the buildings in the complex are gone, with only their chimneys still standing. However, there are a lot of chimneys...this camp was massive. 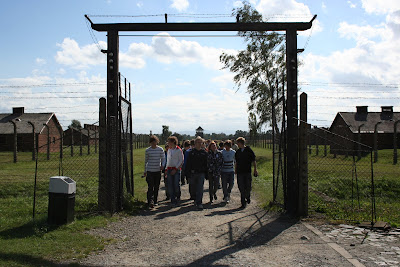 A group of Polish school children walks so freely out of the once electrified gates... 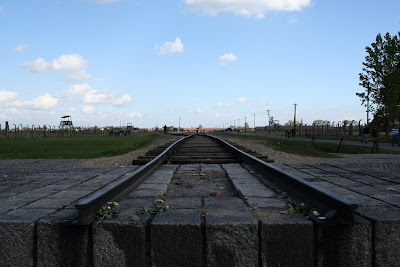 The end of the train tracks...looking back at the camp and the "Death Gate" through which the trains would come. This was the end of the line, and the end of life for over a million people who were unfortunate enough to be doomed to Birkenau by the Nazis. It was here that the Nazis had built two massive execution complexes, consisting of a deadly dis-assembly line of sorts. This is where the gas showers and fiery cremation furnaces were. Even more disgusting, the Nazis didn't even kill these people themselves. The Nazi SS forced other prisoners to work the showers and crematories. These prisoners were made to eat and sleep above the death chambers so that they could not speak to any others of the atrocious jobs they were forced to work. I was not there as a prisoner, and I have not the slightest idea what it would have been like...but I hope to God that if I were ever put into that situation, I would take death over doing such a thing. I simply cannot understand how these people could have chosen to do such things over death by Nazi gunfire. Like I said though...I was not put into their situation, and i don't think any of us can say what we would have done if we were in their horrible place. 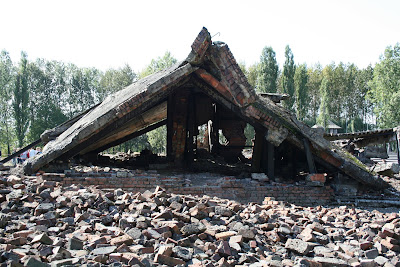 When the Nazis knew they would have to retreat from the advancing Red Army, they destroyed the gas chamber/crematory complexes of death to try and hide the evidence of the horrors committed there. They could not however hide the ashes of over a million cremated bodies that were mostly buried in a massive pit beside the buildings. Nor could they silence the truth spoken by those prisoners that were fortunate enough to have survived... 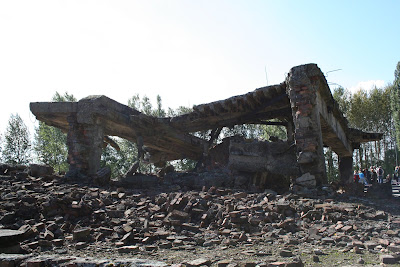 It is disgusting to think that many of the Nazis that worked at these camps and were responsible for the acts of attempted genocide committed here got away, totally unpunished for their roles at the Nazi death camps of World War II. Many of them escaped to South America where they lived out the remainder of their lives and even had families. Life is not fair; this is direct proof of this. I hope to God that some form of eternal damnation exists, if only so that these bastards can endure for all time the same horrors that they forced on so many others. 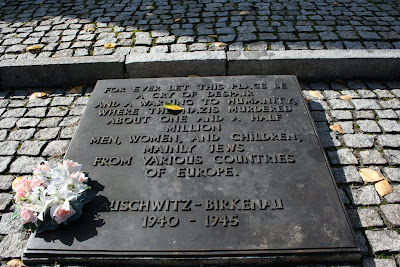 This plaque is replicated here in over a dozen different languages to remind all visitors of exactly where they are and why.

For a good account of the camp's history, check out: http://en.wikipedia.org/wiki/Auschwitz_concentration_camp
Posted by Drew at 10:05 AM