There were four of us that started the trip together in London: myself, Maciej, Matt, and Brady. We met up with various friends and family members on our way from England to Sweden, Poland, the Czech Republic, and Germany. Many of these friends joined us for several countries...it was an amazing trip and lots of fun to have a large group of friends at all times! We also saved A TON on hostel expenses! 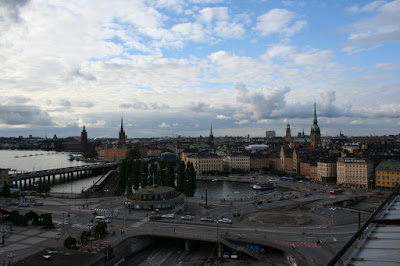 Stockholm, Sweden...a city put together on 14 islands. Maciej, Matt, Brady, and I met up with some of our Swedish friends who had studied at Univ. of Colorado with us and had recently moved back to Sweden. They have an incredible country chock full of beautiful old cities and towns, moose paraphernalia, Ikea's, and yes...lots of blond people. 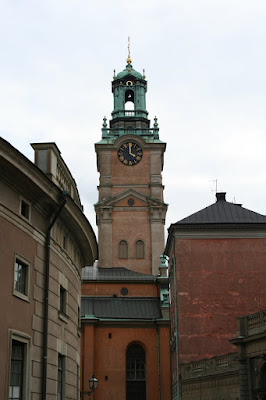 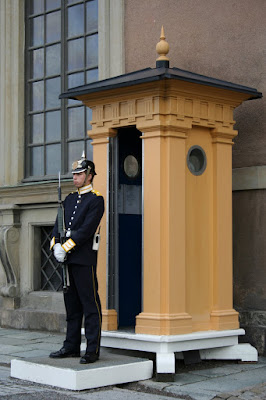 One of the Royal Guards outside of the Swedish Royal Palace...where the King, Queen, and Princesses live. The royal family is quite popular in Sweden....they even appear on the postcards there! 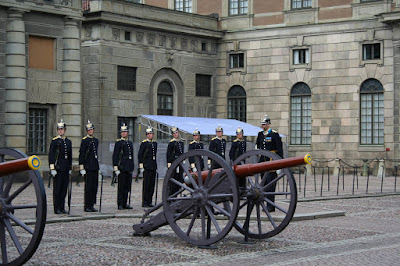 Changing of the Royal Guard. Our timing was impeccable... we were just trying to figure out when the next change was when it started! 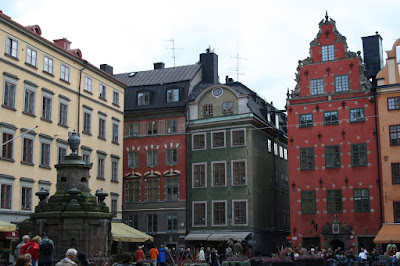 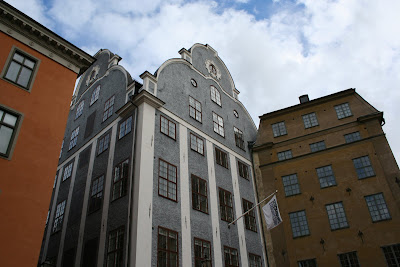 The Swedish architecture is quite interesting...very blocky with lots of warm colors. This building in the middle was one of the few that was not painted red, orange, yellow, or some combination of the three. 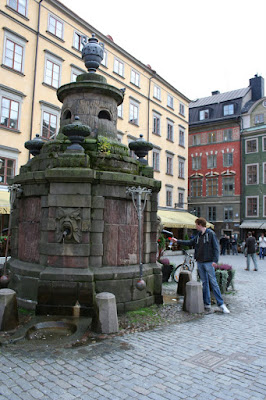 Mattias getting refilling his water bottle at the fountain...he didn't get sick so it was apparently fine to drink! 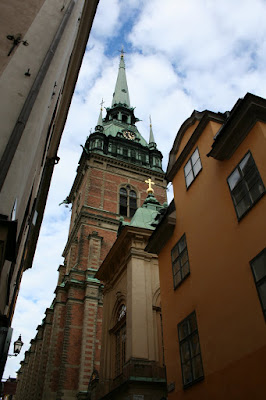 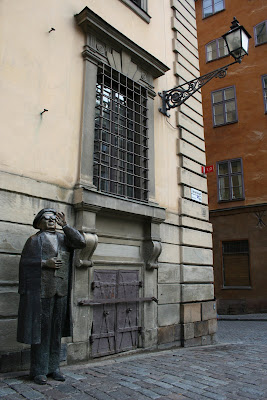 I couldn't figure out what he was looking at... 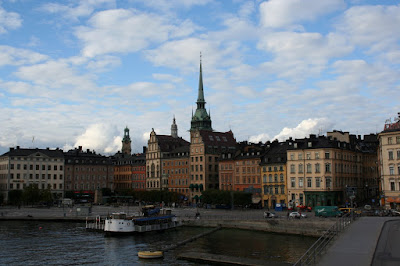 Gamla Stan, Stockholm's "Old Town"....an island's worth of small streets, cool and unique shops, and really old buildings. All of the pictures taken above were taken in Gamla Stan. 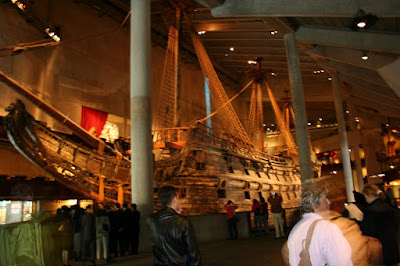 The Wasa (pronounced "Vasa") museum in Stockholm. Definitely worth checking out if you are interested in imperial naval history...or really funny stories. So the Wasa was a massive war ship built in the 1600's to aid Sweden in its efforts during Europe's 30-Years War. It was one of the biggest ships of its kind ever manufactured....and here is where the comedy comes in. On its maiden voyage, it set sail from Stockholm and traveled an amazing 2 kilometers before rocking over and sinking to the bottom of the frigid waters surrounding the city. Turns out that the ship was extraordinarily top heavy because of its enormous amount of cannons and was insufficiently ballasted. Several sailors did die when the ship sank...so I suppose we shouldn't laugh too hard. Anyway, the Swedes ended up finding the ship and pulling it up out of the depths in the 1960's (at the expense of the Swedish king himself nonetheless). It was dry-docked and underwent extensive repairs and renovation. The crafty Swedes then decided to build a museum around the ship! So now anyone can wander in and check out this marvelous blunder of naval history, which I would definitely recommend! 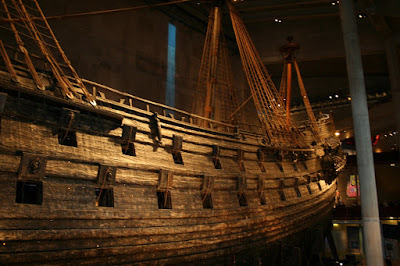 This ship was really, really big...from the bottom of the hull to the top of the upper deck (at the aft) is four stories worth of observation platforms for visitors to view the ship...really, really big! 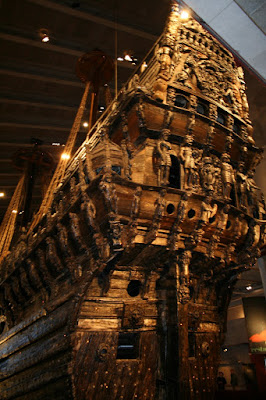 The Wasa has some amazing carved figures all over it's structure. From historical records, they know that these figures were fully originally painted with bright colors. The museum has some mock up figures that are fully painted...from these, it is easy to use your imagination to see just how colorful the ship would have been when it first set sail. 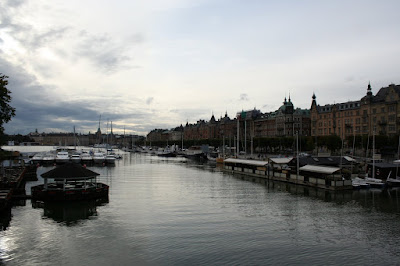 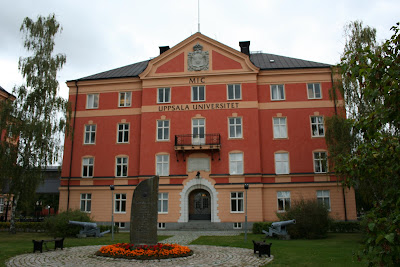 We spent a couple of days visiting friends in Uppsala, which is a university town (really the fourth largest city in Sweden, but with a population of ~130,000, it is not at all like a city at all!). Anyway, being a good European university town, it was AWESOME! My kind of place; the town is very well preserved and easily walkable. It also has some of the cheapest bars in Sweden...but there is a trick to them: you need to be a student to qualify for entrance. These bars are associated with "nations" which are groups of students...kind of like co-ed fraternities in a way...but slightly different. The nations are named after the historical regions of Sweden. Some students sign up for the nation representing their home region or just for the one that best meets their particular lifestyle. Awesome time though...if you are a student visiting Uppsala, definitely register with the nations for access to these nation bars...lots of fun and quite literally the cheapest (good too!) beer in the country! 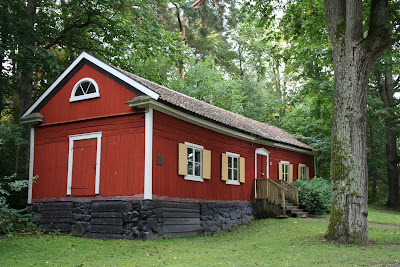 This style of red building is quite popular in Sweden supposedly...and this is a fine example in one of Uppsala's central parks. 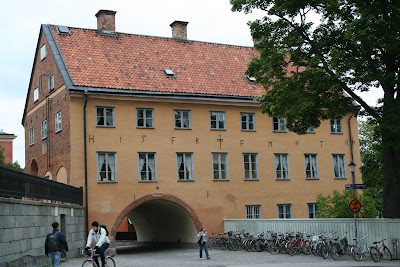 I love the tunnel under the building... 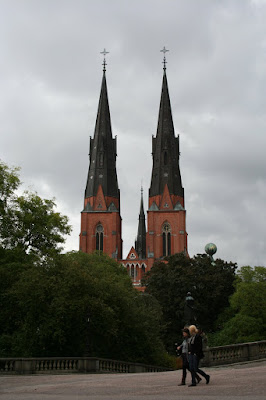 Uppsala's twin towered cathedral...quite visible from most of town. We also wandered around inside there...beautiful inside and chock full of famous dead Swedes.
Posted by Drew at 11:42 PM