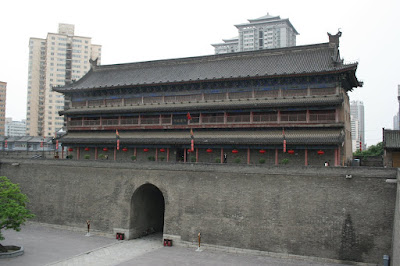 Xian is another city graced by a full ring of ancient city walls, but that is about as much as it has in common with Pingyao. Xian is a much, much larger city. It was another important city along the old silk road, and it was one of the ancient capitals of China. We spent three days here on our trip, which wasn't nearly enough to take in all that the city and the surrounding area have to offer. Unfortunately, the wet weather came with us here, but it still worked out well. Overall, we had a really good time in Xian. 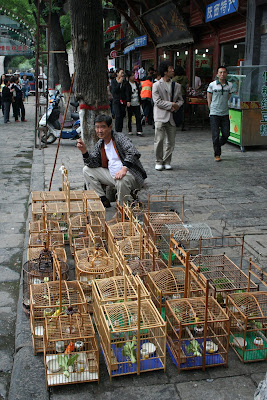 Songbirds are popular pets in China. People keep the birds caged, but they also take them for walks and to parks to socialize with other people's pet birds. 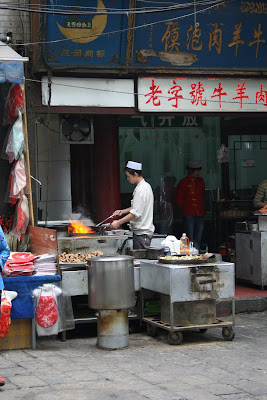 Xian is well known throughout China for its great food. There is a strong Muslim population in the city, with an entire quarter of the walled portion named after this fact. The Muslim Quarter is a great place to wander, and the central Asian influence on the food is amazing. They thouroughly enjoy their barbequed meats, which are always done out in front of the restaurants...so you can just imagine all the amazing smells you encounter as you wander around. Having such a great love of barbequed meats, the Quarter is also home to a great deal of butchers shops, which are almost all open to the street so that passersby can see all the raw, butchered animals and parts (which I really enjoyed honestly). My favorite meals here were all in the Muslim Quarter. The barbequed leg of lamb was incredible. They use this amazing mix of spices for the bbq'd meats...so spicy and so good. Also, late at night vendors with carts come out to make fried meat and vegetable sandwiches, which were literally life-changingly good. 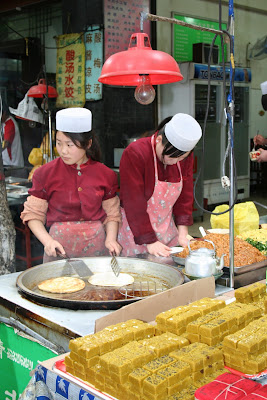 In the mornings, breads and soups are popular. We had a great meal of meatball soup, gelatinous chicken soup, bread, rice, and salad at a tiny little place in the Muslim Quarter. The place was obviously family owned (the Mom ran the show, Dad cooked the soups, and the kids just enjoyed us foreigners stumbling in and loving the food....the family obviously lived upstairs), and despite them speaking no English and my Chinese being absolutely terrible, we managed just fine. The best is that the whole meal came out to $0.80 each! Can't beat that. 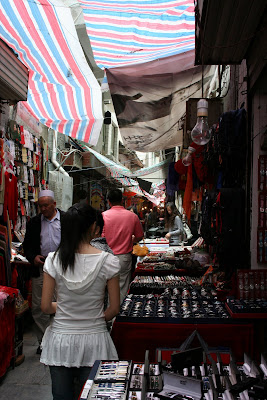 A tiny alley lined with market goods. Bargaining is a must in Chinese markets (just not in official, government stores and most official food markets or quick-stops), and I had a great time doing it there. 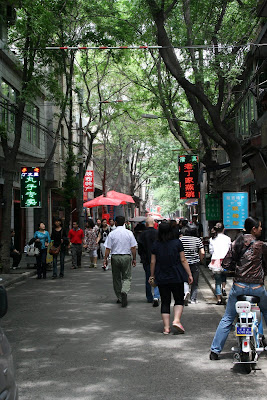 A normal backstreet scene in Xian. 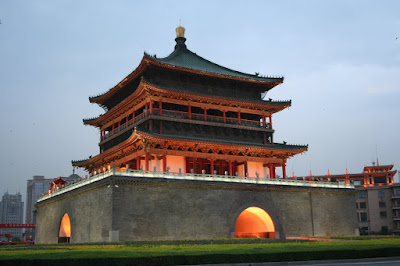 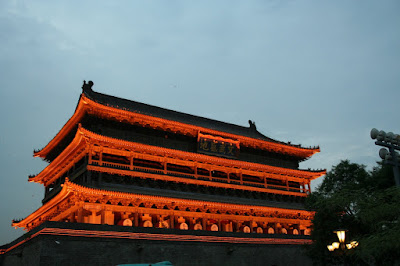 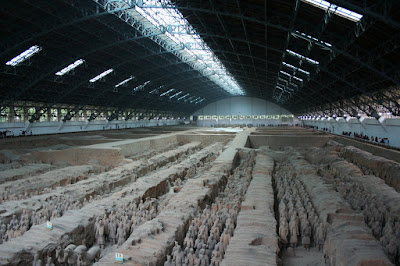 About an hour bus ride from Xian is the Terracotta Army sites. Missy and I were going to skip this to go check out Hua Shan, a holy mountain, instead, but due to the rain, we changed plans. 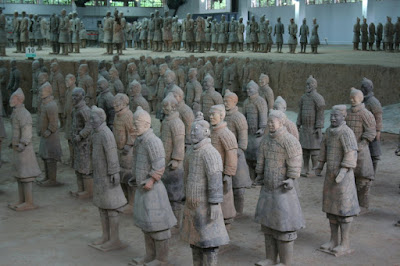 This site is truly amazing, despite the throngs of tourists. The army is split up over three "pits". The largest is the first (shown in these pics), and I would recommend, should you ever go, doing the pits in reverse. Start with the third and then work back down to the first. This is what we did, and each pit gets more and more impressive this way. I'm not going to give too many details here, if you are interested, just look it up. 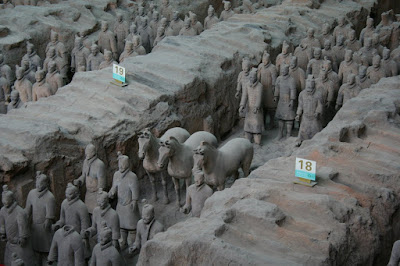 There are just row after row of soldiers, horses, and charriots. The army was built by Qin Shi Huang, the first Emperor of China, to guard his tomb. It was never supposed to be seen by living people, though since his death, it has been raided by enemy armies and most recently discovered by a peasant in the 1970's and excavated to the state it is in today. I wonder what the Emperor would think if he knew that thousands and thousands of people visit his "secret army" every week? 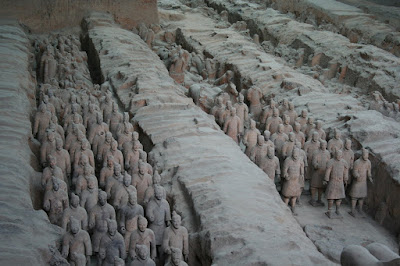 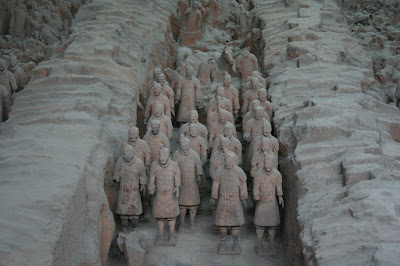 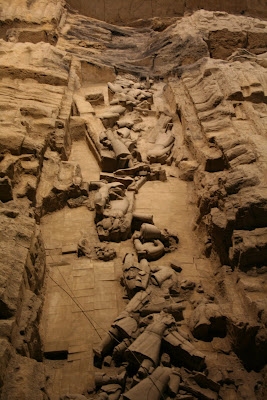 This is the second pit, which is also huge...though not fully excavated. Also, a lot of the figures here are broken. 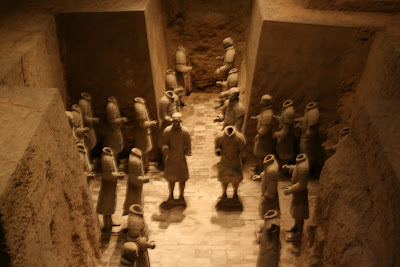 The small, but important, third pit. 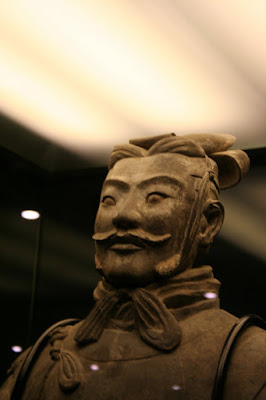 Each figure's face is different! 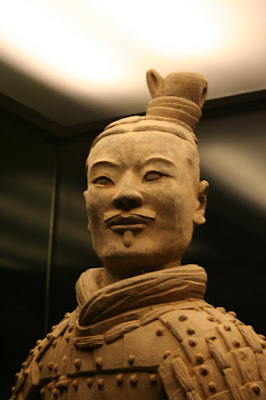 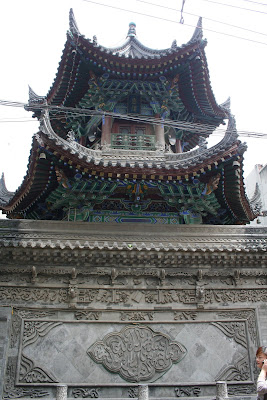 Back in Xian, at the Great Mosque, the largest of its kind in China. It was absolutely amazing to see the mix of Arabic and Chinese architectures and written language. 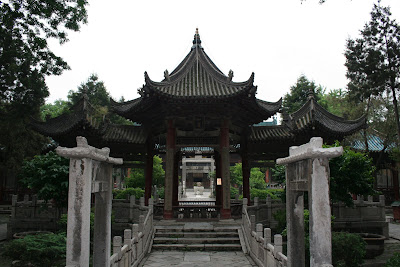 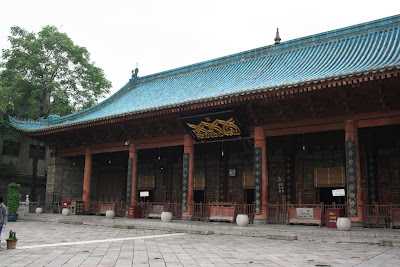 The roofs were tiled in blue...pretty cool. The complex is huge and well worth taking the time to wander and just relax, it is a very peaceful place. Also, the staff is very friendly and welcoming. The old Chinese guy that took our tickets spoke excellent English and French and I believe we also heard him greeting a couple in Spanish! 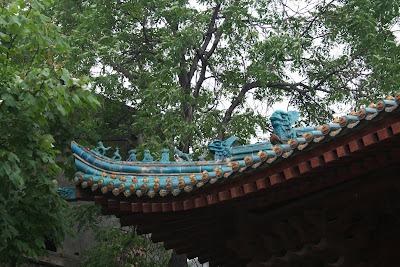