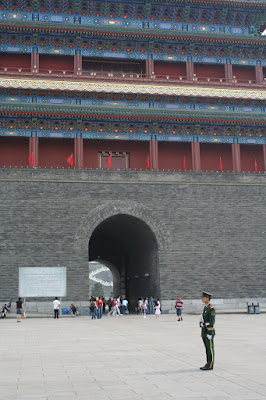 China, where to start? This country is huge in pretty much every way. It is the fourth largest country in the world by way of land area and the first by way of population. It is one of the strongest nations in the world in terms of military and economy. The Yin and the Yang are fundamental concepts in Chinese philosophy, and these opposite yet interconnected and interdependent forces are seen throughout China. The country is home to some of the wealthiest individuals in the world, yet it also claims some of the poorest. It has several of the worlds most densely populated cities while at the same time, some of the most remote regions, which are practically devoid of human life. It is home to the world's highest piece of land yet its coastline stretches for thousands of kilometers. Its cities are infamous for their polluted air and waters, yet its less known national parks and preserved areas are pristine and beautiful. It is a massive country of contrasts with an incredible and very, very long history. Where to start? I will start where Missy's and my trip started, Tiananmen Square, at the center of Beijing and the heart of the country. Here, I will do my best to relay the incredible three weeks we spent traveling through this country. We did our best to see a lot, but we barely scratched the surface in China.

The picture above is of a guard at attention in Tiananmen Square with the southern gate in the background. 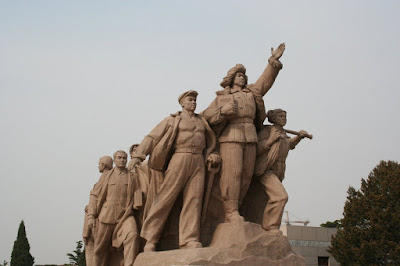 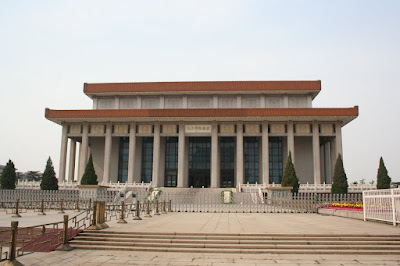 The Mausoleum of Chairman Mao Zedong. As with other Communist leaders of the past, like Lenin and Ho Chi Minh, Chairman Mao was embalmed (against his wishes; he wanted to be cremated) and entombed in a crystal coffin so the masses could look at his body long after his death. 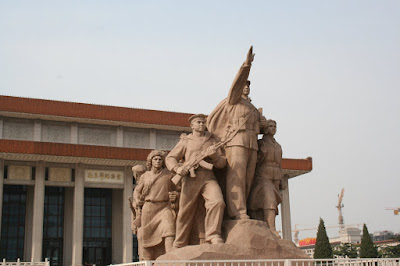 The other flanking statue. I particularly like the SKS (assault rifle) in hand, but it is fitting as Communist China was founded by revolution. 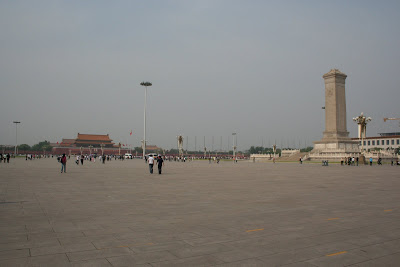 Tiananmen Square is the largest open-air city square in the world... and it is absolutely massive! The square itself covers 100 acres and it is named after the Tiananmen, which translates to Gate of Heavenly Peace and is the famous red gate featuring the enormous portrait of Mao. Missy and I walked through here...taking our time to take in the enormity of the place as well as the incredible history it has seen. 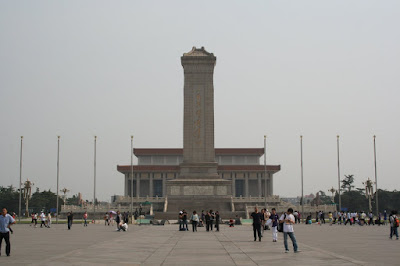 Looking south down the main axis of the square, and also of Beijing itself. Feng shui is very important to Chinese architecture and civil engineering, and a good North-South axis through the city's center (i.e. where the leader lives...the Emperors Palace in the Forbidden City for Beijing) is vital. 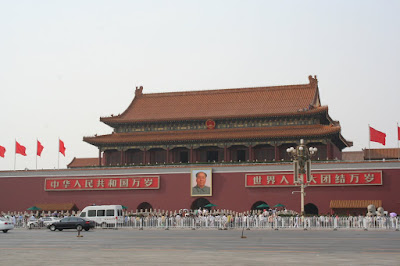 Tiananmen, Tianan Gate, the Gate of Heavenly Peace. This is of course one of the most photographed places in China, and thus, there are plenty of people around it...even more so when you consider that it is one of the few ways to get access into the Forbidden City, which lies directly North (along the main axis) through the gate. It was near here that Missy and I first had the feeling of how few Westerners get to China. We had a couple groups of students ask to have their pictures taken with us as well as plenty of stares from some of the Chinese tourists. Overall, the people were very friendly though, and they got a kick out of my terrible attempts at Chinese. They particularly liked when Missy and I would smile and thank them in Chinese, xie xie. 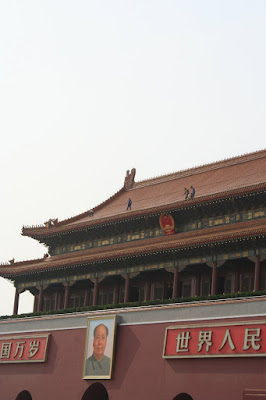 They must have been repairing some of the tiles on the roof...gives you a good idea of how big that portrait is though. 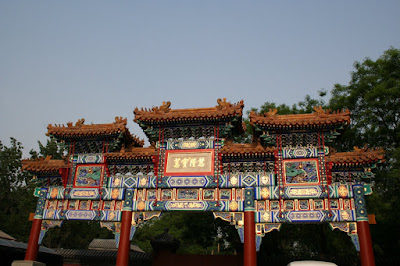 A traditional gate outside of the Yonghegong Buddhist Temple near sunset. Beijing has a brand new subway system thanks to the Olympics, and Missy and I found it most useful (and extremely affordable) to travel around using it. We hopped on at Tiananmen and got off right outside the temple...unfortunately it was already closed by the time we go there though. 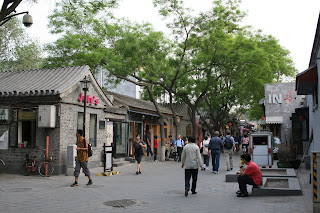 With the temple closed, we decided to go check out a cool little hutong we had read about. Hutongs are the old neighborhoods in Beijing...the old Beijing that is. They are networks of alleys and lanes with old houses, shops, and restaurants. It is in the hutongs, and there are many of them, that you will find some of the best food in Beijing...you just have to be willing to dive in, and probably get lost once or twice, to find it. We ended up going down into this one, North of the Forbidden City and West of Yonghegong, where we found an awesome little cafe with a rooftop patio to enjoy a snack, some Tsingdao beers, and the hazy sunset. 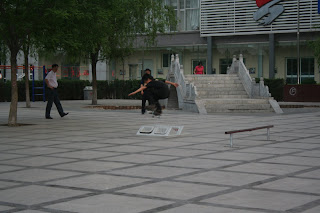 I don't know what it was, but I loved the fact that there was an active skate culture in China. I think it is because it goes so much against the strict, rigid and overwhelmingly studious stereotype of the Chinese youth. 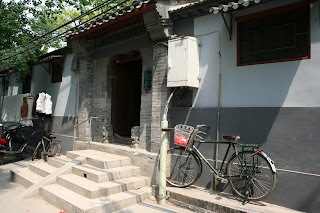 A typical house entrance in a hutong West of Yonghegong Street. Missy and I wandered down here looking for a cafe. We didn't find the one we were looking for, but we stumbled onto the beautiful, tree-lined and historical Guozijian Street and a cafe that was just perfect. 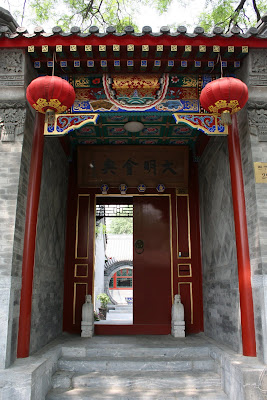 One of the entrances to the Confucian Temple along Guozijian Street. 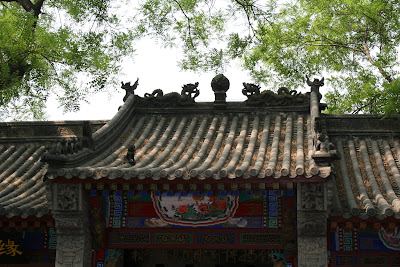 Guozijian Street is a very well preserved historical street in Beijing. It, as well as the area around it, is well worth a stroll down if you are ever there. 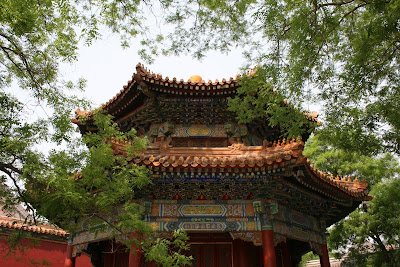 Pagoda inside the Yonghegong Temple grounds. The colors of the paint and the intricacy of the architecture are just absolutely stunning. 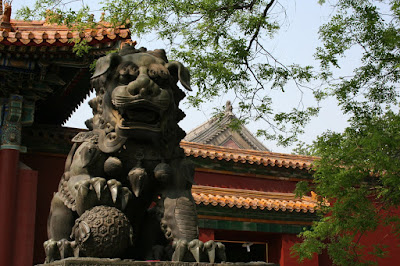 There are lots of lion statues in China...this is because lions are believed to protect humans from evil spirits. 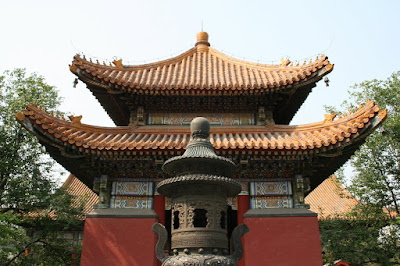 Symmetry is very important to Feng Shui and Chinese architecture and planning. 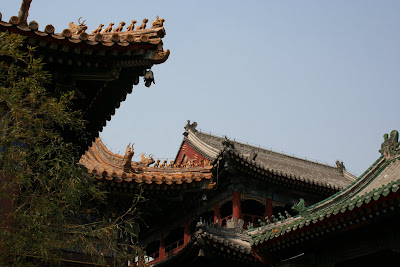 We were blown away by the roofs in China. This is still in the temple, so we expected the intricate rooftops here, but this style is seen on so many buildings, including the some of the average homes and shops, not just the large palaces and temples! 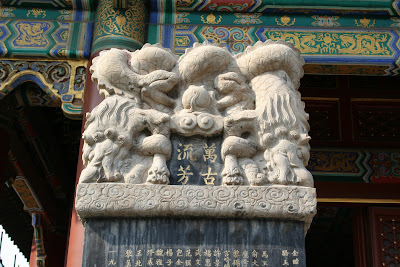 One of the statues flanking the masterpiece of the Yonghegong Temple...an enormous statue of Buddha inside the last building, which you can see some of the intricate painting on here in the background. Despite literal tour busses full of tourists, it was great to see that the temple was still run by monks and used by the devout as well. 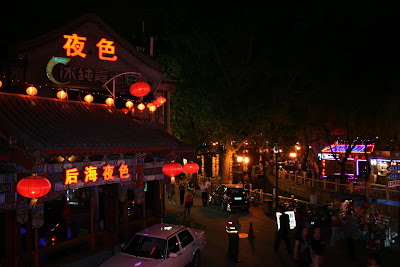 For a bit of nightlife, check out the area around Houhai and Beihai (lakes North of the Forbidden City)...though I must admit, the price for a beer is outrageous for China (~35 yuan = $5.00...like prices back home!). There is a cool little, but touristy, night market street near here when coming in from the Drum Tower and some awesome restaurants around the area between the Drum Tower and the lakes.
Posted by Drew at 2:18 PM