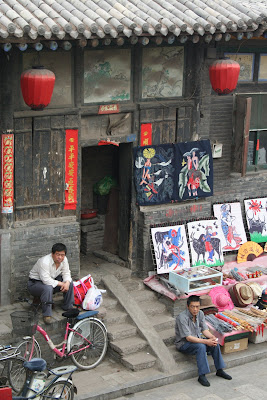 Pingyao, it is a small town to the southwest of Beijing, about halfway between Beijing and Xian. It's historical city center is a nearly perfectly preserved Ming Dynasty walled city. Thanks to this, it is very, very popular with Chinese tourists as well as the odd Western one. 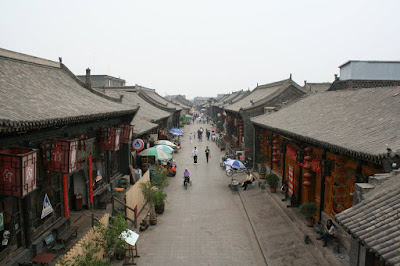 As I said, the city center is well preserved, and we can now benefit from the recently repaved streets, which are beautiful. We had quite a bit of rain for the couple days we spent here, and I was very thankful for those paved streets. Many of them used to be dirt, and with the amount of rain we had (quite unusual for the normally dry Shanxi Province), they would have been very, very muddy if they were still in their old form. Anyway, our hostel was the first building here on the left (look for the Hosteling International triangular sign), and like many of the "Western Hostels" here in Pingyao, it is an old Ming-era mansion. Ours was specifically built as a residence for the Emperor when he came on trips to Pingyao (though he never got to stay there unfortunately). 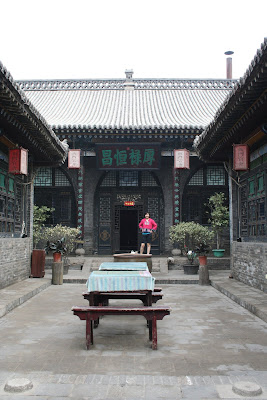 The courtyard at our hostel. It was beautiful, though unfortunately, it wasn't well maintained. We even had an issue with bedbugs in our first room, but fortunately I caught the little buggers before we went to sleep, so neither Missy nor I were bitten. When we moved rooms (across the courtyard), we had no problem. 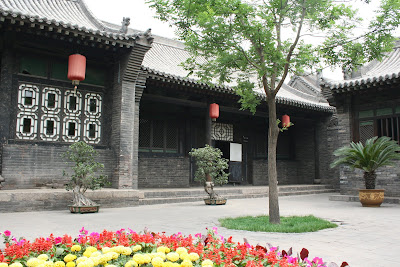 Pingyao was an important city along the old silk road. Because of it's key location along this important trade route, it sprung up as the financial center during the late Qing era in China (the Qing Dynasty, aka Manchu Dynasty, was from ~1644-1912 AD and came after the Ming Dynasty). The city now has many, many museums and historical sites (other than the city ITSELF which is one big historical site). This is inside the old county capital complex. 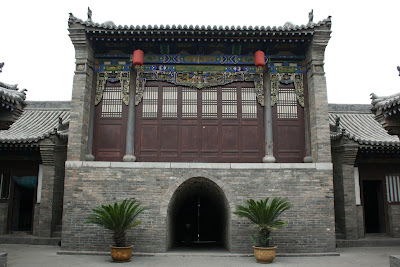 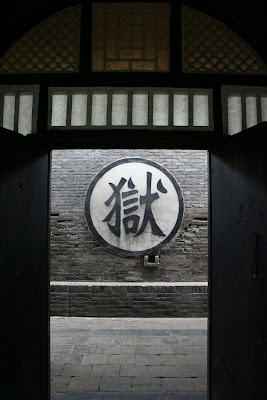 This is the old county prison. The character translates to "prison". 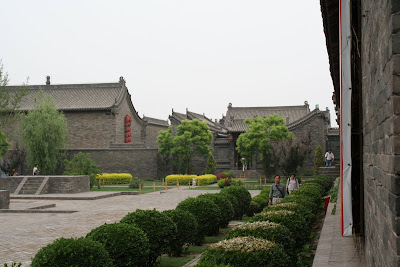 Courtyard at the county seat. 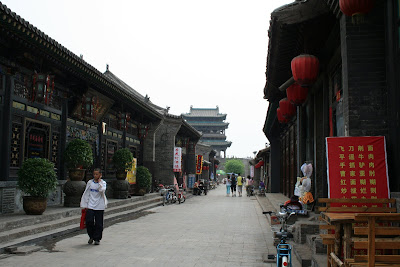 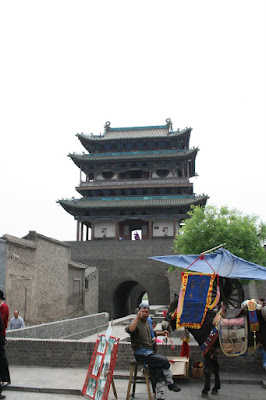 One of the few gates through the old city walls. 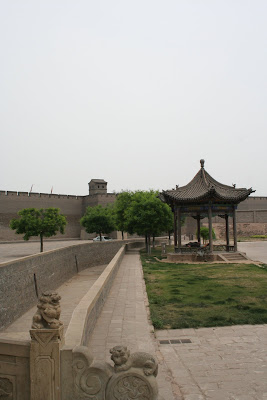 Outside the old city walls. A fun thing to do in nice weather is rent a bike and go around the full circumference on top of the wall. 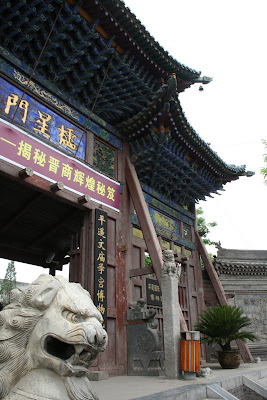 Entrance to the Confucian Temple. The fact that so much here survived the Cultural Revolution is a miracle. 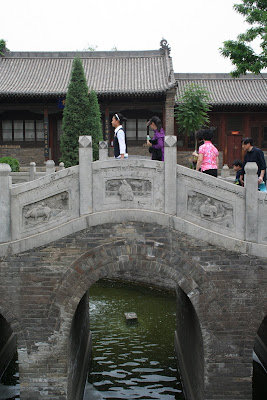 Bridge inside the Confucian Temple. 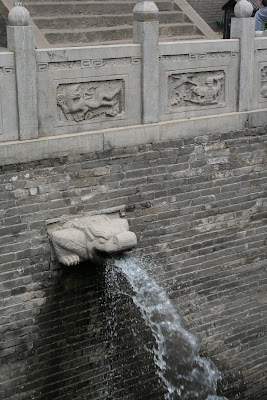 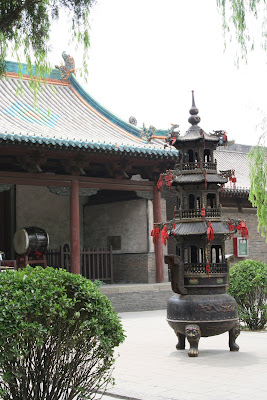 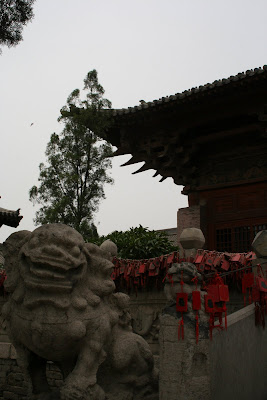 The little red things hanging everywhere are apparently people's prayers, written down and then hung up in the temple. 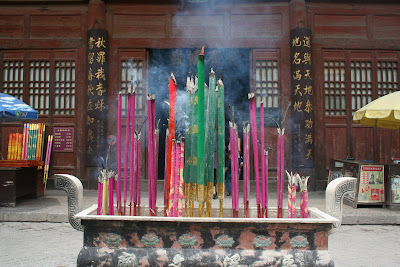 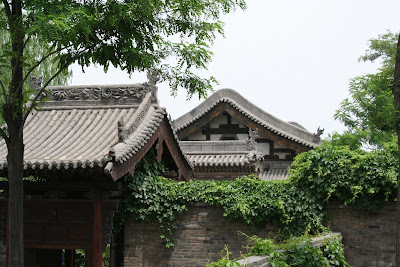 There was plenty of greenery in the temple grounds, which was nice. 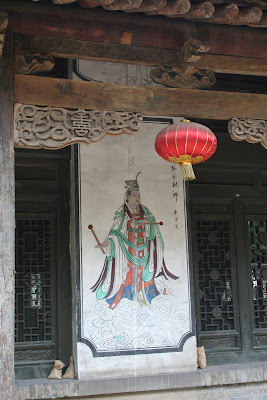 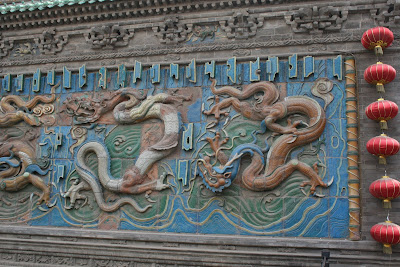 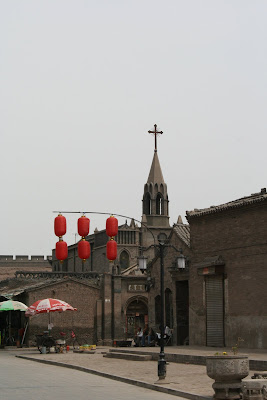 A Christian Church...this was unique, though Christianity is a somewhat popular religion in China. 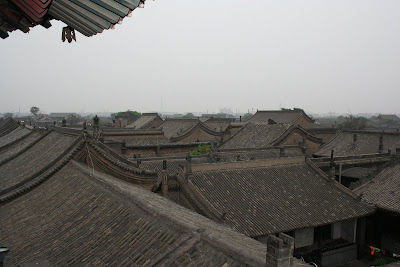 Pingyao rooftops from the central tower. 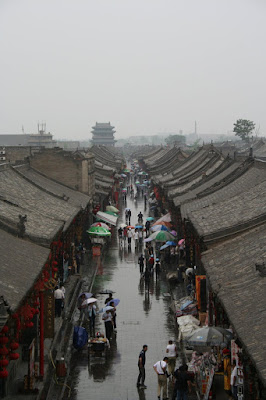 Pingyao street in the rain. 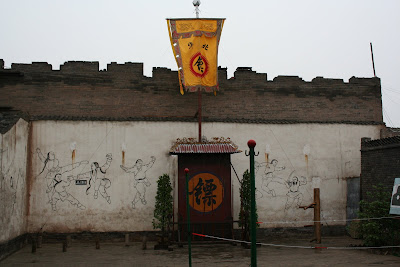 This was in the old guard training complex. Since Pingyao was a financial center with plenty of banks and large markets, lots of money, wealthy people, and goods came through here. Thus, body guards and armored carrier services were necessary. This old complex is one of the many museums in town and it is one of the places used to train and house the mercenaries used to protect wealth while in transit between cities. It is an interesting little complex, though I must say the highlight is being able to shoot real bows and arrows in the back courtyard (pictured here) for only 10 yuan for 5 arrows! Fun, even in the rain! 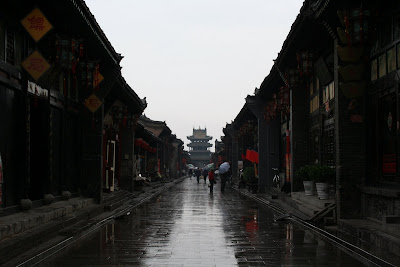 Like I said, lots of rain...I would have loved to see this town with bright blue skies, but oh well. It was still incredible. 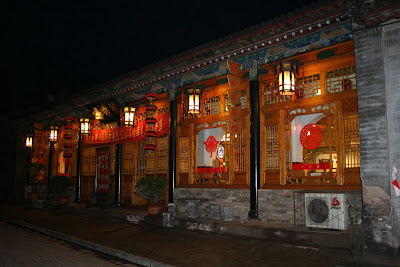 Our hostel from the outside at night. I'll say some stuff about the food now. Shanxi is famous throughout China for it's various noodle and sauce dishes. While Missy and I were in Beijing, we ate at a Shanxi noodle joint called the Noodle Loft (Mian Ku), which I would highly, highly recommend. You can get a massive bowl of noodles (all different types, shapes and sizes too) for 12 Yuan (~$1.75) and then help yourself to a plethora of different, and delicious sauces. The food uses a lot of dark vinegar and tomatoes, though the sauces ranged from a very beef-gravy like thing to a very-marinara like tomato sauce. Anyway, the famous noodles are the cat's ear noodles (triangular and somewhat flat) and the very long (several meters) green noodles. In addition, Pingyao is famous for it's beef. Needless to say, while we were here, we sampled a lot of the local style dishes in the smaller cafes and restaurants sprinkled around town. This particular style of Chinese food was one of my favorites! 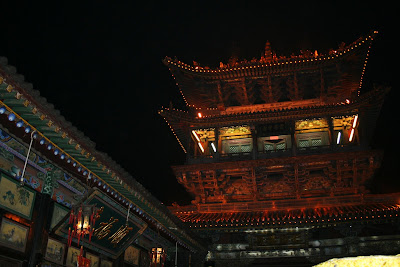 The city tower by night. 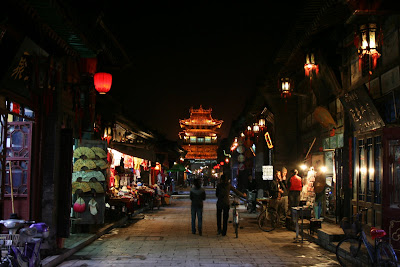 Many of the shops stayed open late. Notice the dry streets too; it was incredible how fast everything dried up after a day and a half of nearly constant rain! This is testament to how dry the area normally is. Overall, I would highly recommend a short stop over in Pingyao. It is a beautiful old city, and though we didn't get the chance thanks to the weather, there are supposedly many beautiful things to see in the countryside around the city. Pingyao is definitely worth about a day or two stopover.