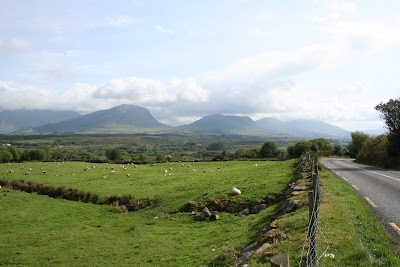 As we left Killarney National Park and made our way down R568 towards the Ring of Kerry, the scenery started looking more and more like the Irish scenery most people probably think of when they think Ireland: rolling green fields with distant mountains and plenty of sheep. 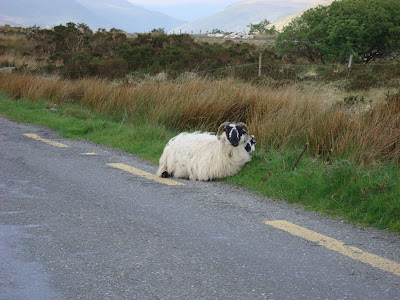 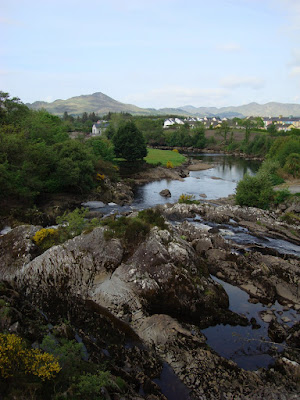 We stopped in a small town along the Ring of Kerry called Sneem. We were really hungry and decided to try some good full Irish breakfasts. We were quite pleasantly surprised to find such a pleasant and peaceful town with some additional rugged beauty. 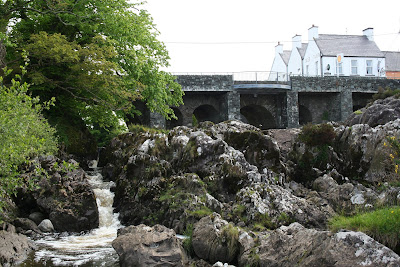 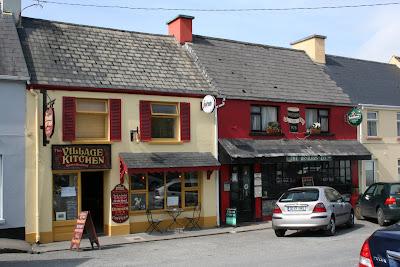 Missy and I got our full Irish breakfasts here at the Village Kitchen in Sneem. I had by far the best smoked salmon I have ever tasted served up with a large plate of scrambled eggs, tea, toast (with black current jam of course), baked beans, and a tomato. Missy had the legit full breakfast consisting of tea, toast, two sausages, rashers (back, or Canadian cut, bacon), two fried eggs, baked beans, a tomato, and of course, black and white pudding. Irish pudding is similar to a sausage but consists of a combination of grains, spices, and pig meat, and black pudding has the additional ingredient of congealed pigs blood. Missy is slightly squeamish about such things, and I really wanted to try them. So I ended up eating both and absolutely loving it! They reminded me a lot of Thanksgiving stuffing..the real stuff that has been cooked inside the bird...especially the black pudding. Anyway, I loved the food. As with Poland, the food in Ireland, particularly these lovely breakfasts, reminded me so much of eating with my grandparents and family whenever I visit Welland, which is always a warm memory. 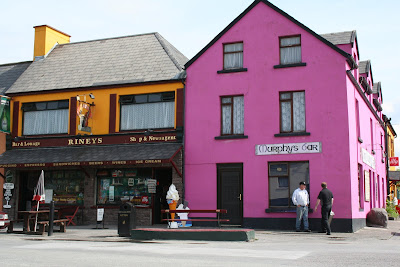 My experience along the Rings of Kerry and Skellig was the Ireland I was hoping to find. It was all so stereotypically Irish, but so absolutely genuine nonetheless. 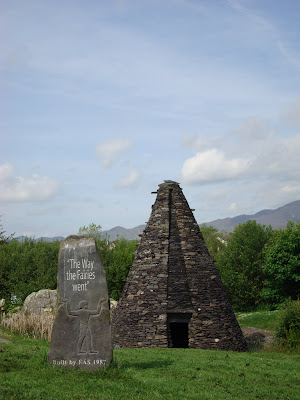 Ok...so much for the genuine thing. Sneem is another Tidy Town winner, and they have this weird Way of the Fairies thing set up. The stone huts may look old, but they were erected quite recently (I mean in the past decade, not century or millennium like the other stone huts in the area) and contain colored glass windows to make pretty colors inside when the light shines through. There are several of these set up in a little grassy patch beside one of Sneem's old stone churches. Just a weird thing we found along the way...had to mention it. 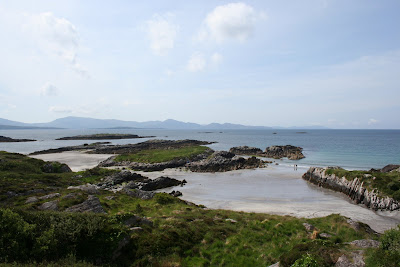 Back to beautiful Ireland. This little patch of heaven is called White Strand and can be found on the Ring of Kerry in the southwest corner of the Iveragh Peninsula. This was definitely one of Missy's favorite spots we found along the way. The water was crystal clear, and we were blessed with an equally clear blue sky. The land in the distance is the Beara Peninsula. 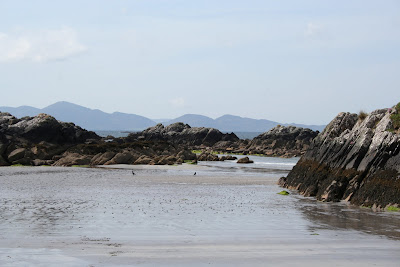 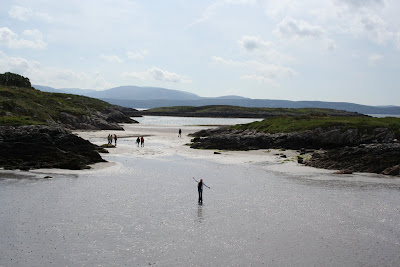 Missy being happy to be back in her natural habitat, the beach. 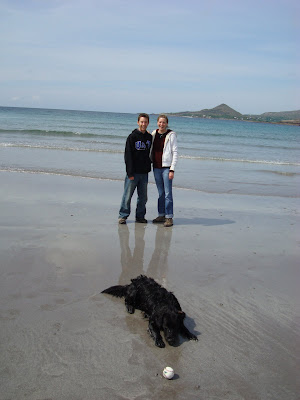 Another kind local showing off his dogs tricks, and he was even kind enough to get us in the picture too! 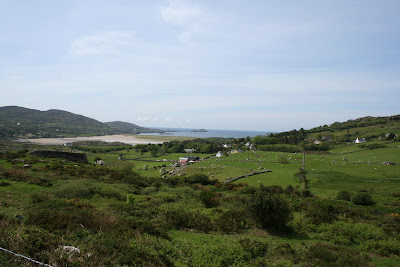 If someone asked me what my favorite viewpoint from the entire trip was, this would be it. This scene contained so much of what I loved about Ireland. Unfortunately, this picture does terrible justice to how grand it was in reality. All I can say is that I could easily see myself retiring to one of those farmhouses. 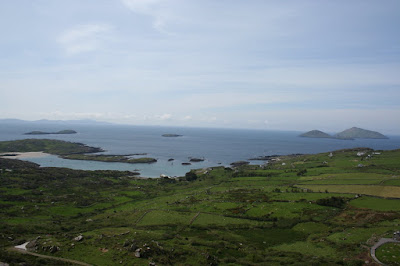 The road continued to wind its way up to the Coomakista Pass at the southwestern tip of the peninsula, and all along it, there were these incredible views. It made driving quite difficult, and slow. 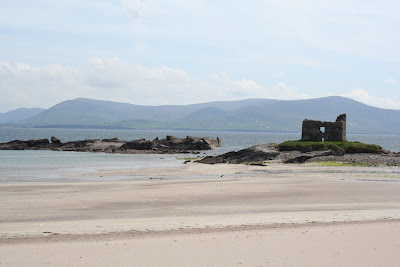 Ruins on the beach near Ballinskelligs along the Ring of Skellig. This beautiful drive is seen by much fewer tourists and travelers as it is inaccessible to tour buses due to its often one lane, steep, twisty roads (with your usual 80 kph limit of course). This peninsula on the peninsula is also a Gaeltacht area, meaning that most of the locals speak Irish (Irish Gaelic) as their first language and English as a second. It also means that the signs are all in Irish only, which was fine by me. 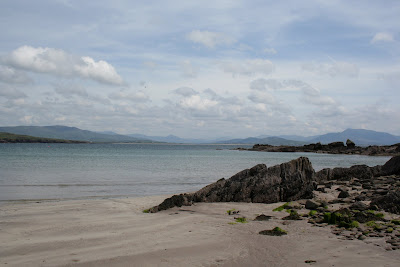 More from the Ring of Skellig... 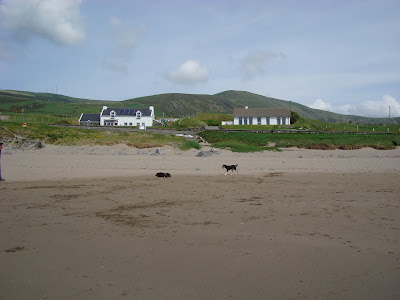 We found 3 very friendly and playful dogs on this beach along the Ring of Skellig. Nearby was the Skellig Chocolate Factory, which had some of the best tasting chocolate treats I've ever found. It is all hand made at this factory in what seems to be such a sleepy little village by the sea. Their truffles were particularly delicious; we got to try strawberry and champaign, hazelnut praline, and orange to name a few. You can check them out (and order chocolates, which I would highly recommend) online at http://www.skelligschocolate.com/ 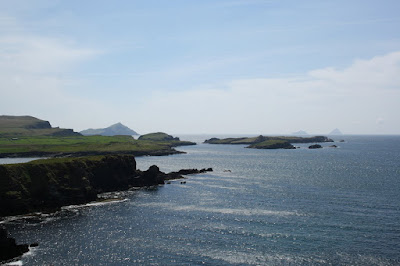 Looking back at the Inveragh Peninsula's western shore from Valentia Island. The two islands in the distance on the right are the Skellig islands...two rocky lumps jutting out of the ocean. Michael Skellig is the larger of the two and is famous for its old Christian monastic ruins. The cliffs you see in the distance at the leftmost of the picture are supposedly the most spectacular in County Kerry and are accessible from the Ring of Skellig (according to the signs), but when Missy and I got to the walkway out to them, apparently the owners were out of town as the place was gated up and there was a sign saying they were closed. This bothered Missy and I quite a bit as we were really pumped up by the previous signs boasting the cliffs beauty. We stuck around a while hoping for someone to return and even debated just hopping the fence, but decided not to in the end. We had mostly bad luck with cliffs on our trip...up until the County Donegal, but that will come later on. 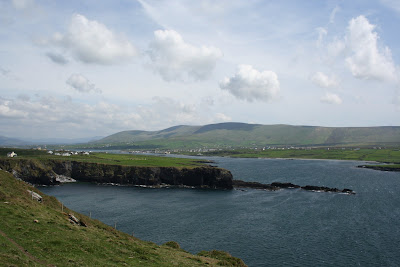 Looking southeast at the Inveragh Peninsula from Valentia Island. This was by far the best weather we had on the trip, and I'm so glad we had it for this day. 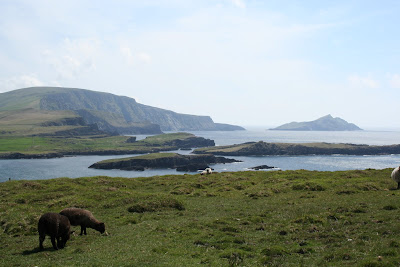 Baa, baa black sheep, have you any wool? 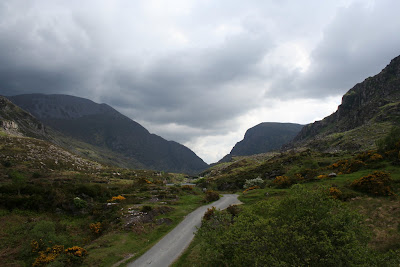 We ended our day with a short hike up the Gap of Dunloe, east of Killarney. This gap cuts through the mountains that run down the middle of the peninsula, and it is in a lake up there where St. Patrick supposedly trapped the last snake in Ireland, a great serpent who still remains locked up in a chest at the bottom. 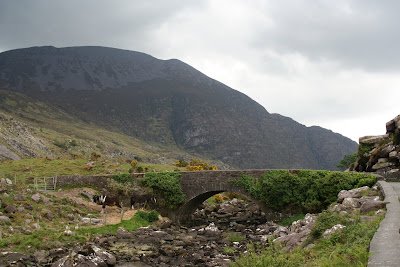 It was quite beautiful up there as well, and the main path was paved most of the way despite rumor that it was closed to cars. We saw several people on horseback as well as some cars that were going up it. I'm still not sure if it is through to traffic now, but I do know for sure that one can definitely hike from one side to the other. Missy and I didn't have the time to do this, but I'm quite sure it would be an incredible hike. 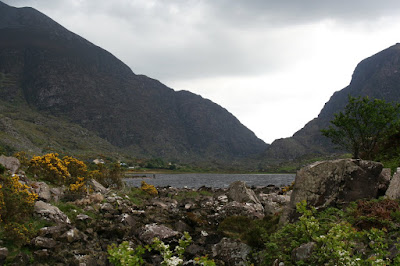 There is also some great rock climbing around the Killarney area. Apparently Missy and I look like climbers too, as the guy that checked us in a Neptunes in Killarney asked us immediately if we where here to do climbing. We saw a few climbers on our hike up the Gap. The pic below was taken by Missy...she's just got to show me up now doesn't she. 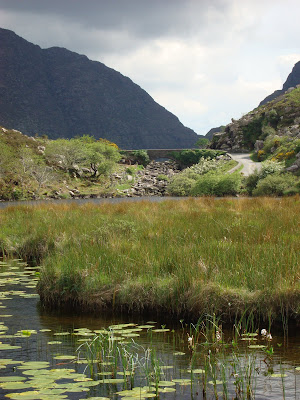