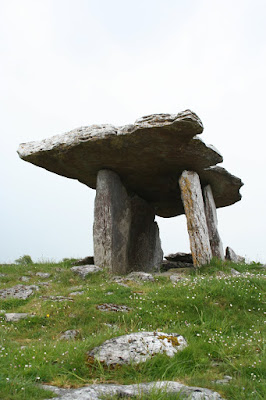 Poulnabrone Dolmen, the Burren, County Clare. Missy and I woke up fairly late for our drive up to Galway from Killarney. This was mostly due to the weather, which was extremely wet and dreary. After eating breakfast at the hostel, which included some lovely black and white pudding for me, we zipped our way north through County Kerry to the Tarbert-Kilrush car ferry. Our timing was impeccable and we were able to pretty much drive right on with no wait. Fortunately, we could stay in our car for the ride, which was exceptionally windy and rainy...but still with some beautiful views up and down the River Shannon. When we hit the north shore, we booked it again north aiming for our goals of the day: The Burren and The Cliffs of Moher. 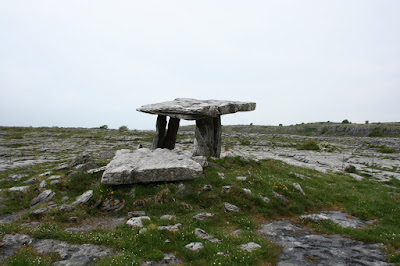 As mentioned above, this is the Poulnabrone Dolmen, a massive megalithic tomb that served as the resting place of over 30 people dating from around 2500 B.C. (yea...that is old). As with other prehistoric megalithic sites, it is absolutely mind-bending to think how people moved these massive stones around, let alone how they stacked them. Anyway, as you can see from the surrounding area, the Burren is an awesome landscape of limestone riddled (and often dominated) hills and plateaus. 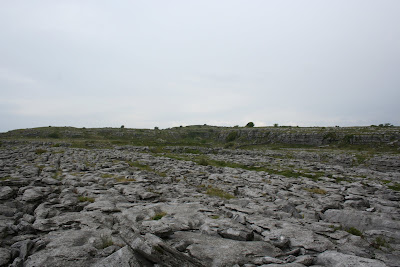 The Burren is home to more than 70 megalithic tombs and countless other wedge tombs, ring forts, and rock circles. As we drove through this breathtaking and other worldly landscape, we saw plenty of these prehistoric human sites just from the road. I found the landscape itself to be the most awe inspiring, however. The amount of rock is just staggering, and the usually green and rolling Irish country is turned gray and craggy as far as the eye can see. 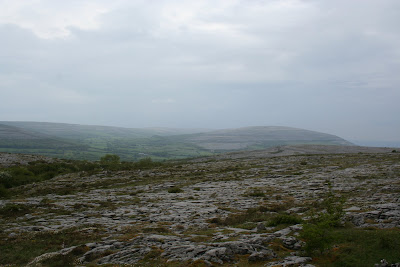 When we first arrived in the Burren, we stopped at the tiny village of Kilfenora, which is apparently well-known for its traditional music. Missy and I stopped at a local pub around one or so to have a tea (we wanted scones too to help lighten the mood of this dreary day, but unfortunately we couldn't find any cafe's open). Anyway, the tea was great and the pub was even better. The interior screamed of character and history, with a plethora of pictures covering every bit of wall space and all containing images of musicians and musical groups with their instruments. The best were the pictures behind the bar: a journey into the obviously very musical past of the old bartender (and likely owner). It was an interesting place, and I wish we had more time to spend a couple days in Kilfenora to learn some of the stories, but more importantly hear some of the music, of the people in those pictures. 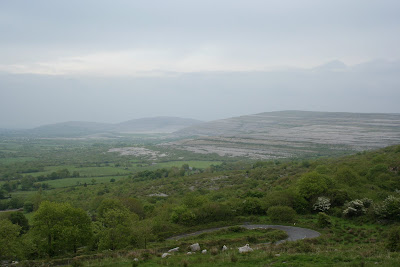 Look at the hills in the distance in this picture, the stone just permeates the region. 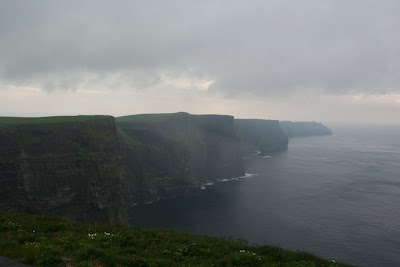 The Cliffs of Moher. This is one of the sights I was most looking forward to on this trip, and of course when we got there, we were faced with what seemed like gale force winds and painful rain. The cliffs were still extremely spectacular...beyond anything these pictures can show. Imagine the Atlantic Ocean, 600 feet below you and just beating at the base of the cliffs you are standing on top of. There were plenty of seabirds braving the storm too, and their aerial acrobatics really helped give a sense of the true scale of these cliffs. They were incredible, even in a gale. 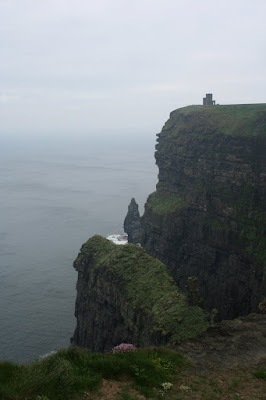 An awesome feature of the cliffs is O'Brien's Tower, which was built in 1835. I would recommend doing a google image search of the cliffs and this tower. You should come up with many a picture exactly like this one but taken on a sunny day, when the sky has some scattered white clouds, the sun is bringing out the amazing shades of green in the grass, and the sea is a beautiful shade of deep blue. That was what I was hoping to see, but I guess I'll have to wait until I return to Ireland sometime in the future. 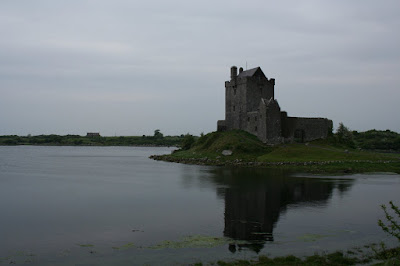 Dunguaire Castle, just another roadside view along the road to Galway. This is just outside of the town of Kinvarra, which itself is a beautiful little seaside town at the end of an inlet on the southeastern end of Galway Bay. 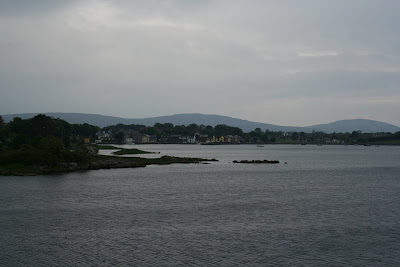 A view across from the castle at the town of Kinvarra.
Posted by Drew at 10:38 AM