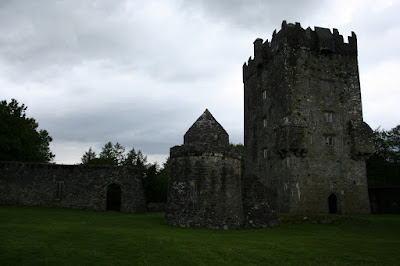 On our second day in Galway, we woke up to more rain and decided to get some much needed sleep. By about ten, the rain had stopped, but it was still quite overcast. We started wandering Galway city some more and by about noon, the sky had cleared and the air had warmed. We decided to go for yet another drive. Connemara is the region of lakes, mountains, and rugged coastline west of Galway. Our first stop was the old tower house seen above, Aughnanure Castle. This castle has been remarkably preserved. It still has most of its outer defensive walls, and for a small entrance fee, guests are free to wander the grounds as well as inside the tower itself. 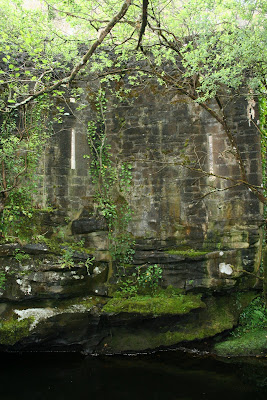 The tower house is built right beside a creek, which definitely acted as part of the castle's defenses. 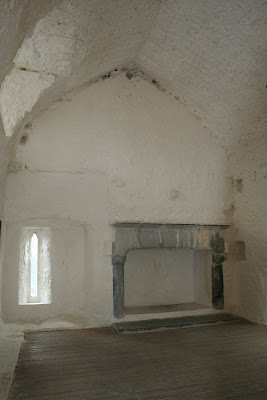 Inside the Great Hall. Standing in the room, it was so easy to imagine a medieval, wealthy family sitting down to a feast with a massive fire roaring in that equally massive fireplace. The tower also housed some more impressive defenses including a trap door, arrow slits aimed along the main staircase, and a murder hole (a grate above the small area between the two main entrance gates through which boiling oil, arrows and other nasty surprises can be rained down upon intruders). 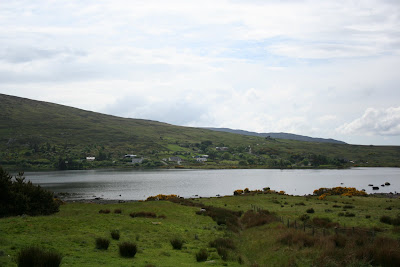 Connemara countryside...this was right up there with the Iveragh Peninsula for me. The landscapes were so beautiful and welcoming, yet another little corner of Ireland I could easily see myself retiring to. 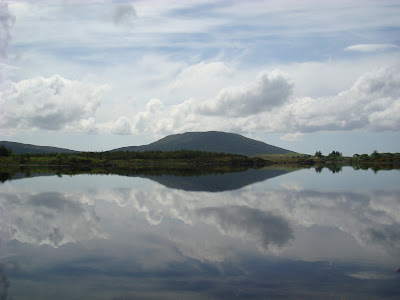 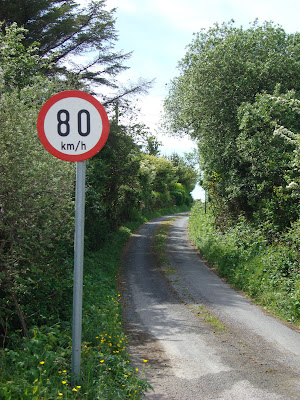 I honestly wasn't exaggerating about those roads...MLK 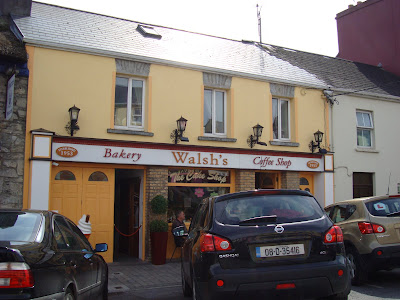 Clifden is a relatively large town at the heart of Connemara. The streets are lined with little shops and pubs, restaurants and cafes, all of which are filled with that Irish charm. Missy and I stopped here for a cup of tea and a snack. 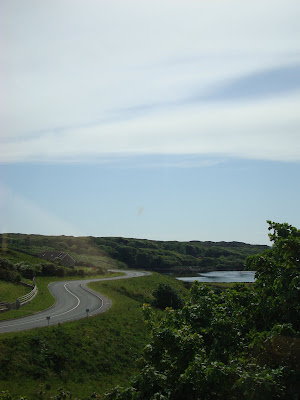 The view out the window at the cafe. The day had become perfectly pleasant, and with the delicious tea and fresh scones (with black current and raspberry jam and fresh butter and cream), it was a surreal little stop that made us linger much longer than we first planned. Clifden is yet another little gem that I will try to stay in the next time I'm traveling around Ireland. 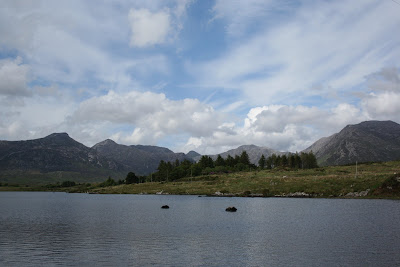 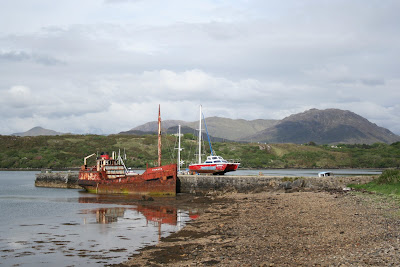 After our break in Clifden, we continued along the road, planning to make a big loop of Connemara before returning to Galway for the evening. These are just some of the scenes we came across during the drive. 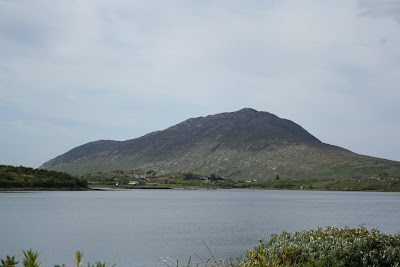 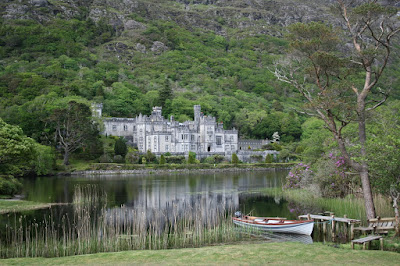 We made a stop at Kylemore Abbey. This picturesque old manor house is now a girls boarding school, but the nuns that run it keep a few choice rooms open to tourists (for a fee of 12 Euro). Needless to say, Missy and I were fine enough just lounging about the grounds for a while and taking in the scenery. 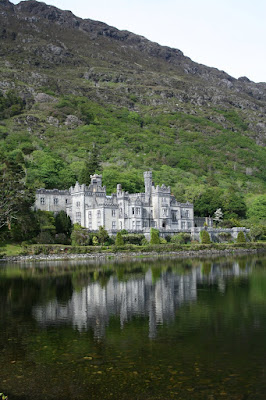 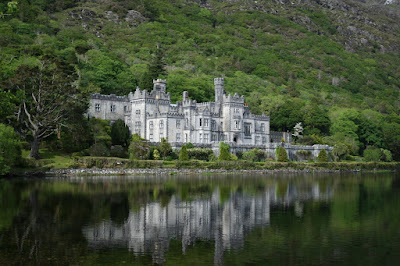 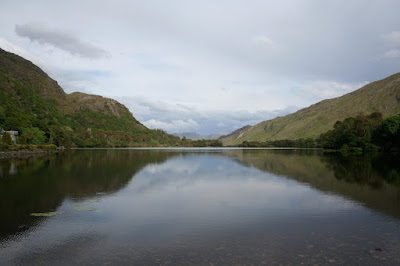 Looking down the lake at Kylemore Abbey. While we were there, we saw some plans for the future at the site. They are working on expanding the walled gardens, which are just a short drive from the Abbey, into a massive garden complex. 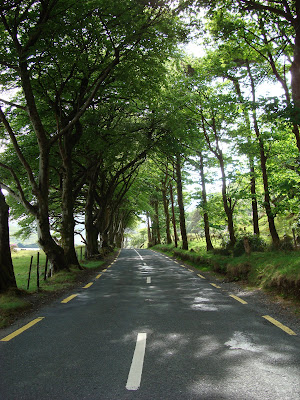 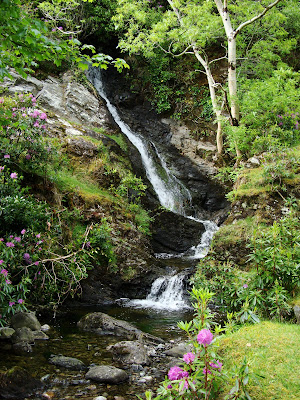 Just a little waterfall at the side of the road... MLK 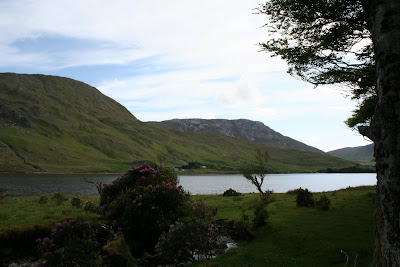 And just the view across the road from the little waterfall. 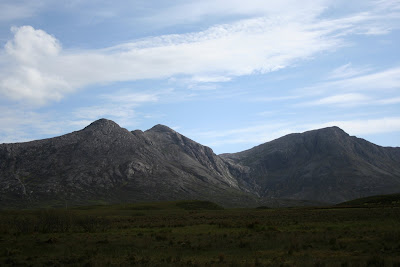 And some more mountain majesty along R336 on our way back to Galway city. 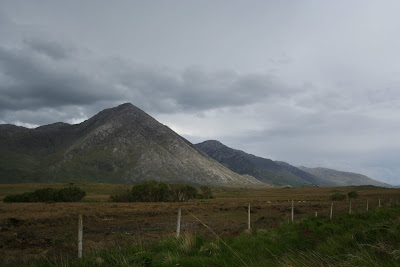