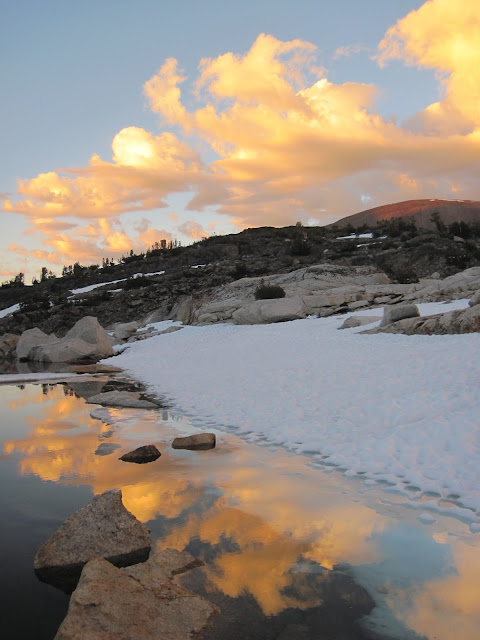 It's sad that I've been living in California for almost three years now, but until June of this year, I hadn't been up into the High Sierra.  One of the things I loved most about Colorado was getting up into the mountains for backcountry camping, hiking, and climbing.  California has plenty to offer there too, but when you live in L.A., it's just a little less accessible compared to Boulder, Colorado.  Still, it is there.  The Sierra Nevada is a huge mountain range, and massive swaths of it are protected land or wilderness areas.  It's an interesting mountain range too... the foothills are stretched out very far to the west.  As you head east from the central valley, the land of fruit and nuts that runs down the center of the state, you enter the mountains and start climbing, slowly and steadily.  The Sierras reach their apex at their far eastern edge, a spine running north-south known as the High Sierra.  After that, there is a several thousand foot plummet to the arid Owens Valley, just one range away from Death Valley, the lowest place in North America.  The High Sierra are high too... Mount Whitney, the highest peak in the lower 48 states is found there, as are several other 14ers.  I was far overdue in getting in to explore those mountains, so I planned a trip with some friends and made it happen. 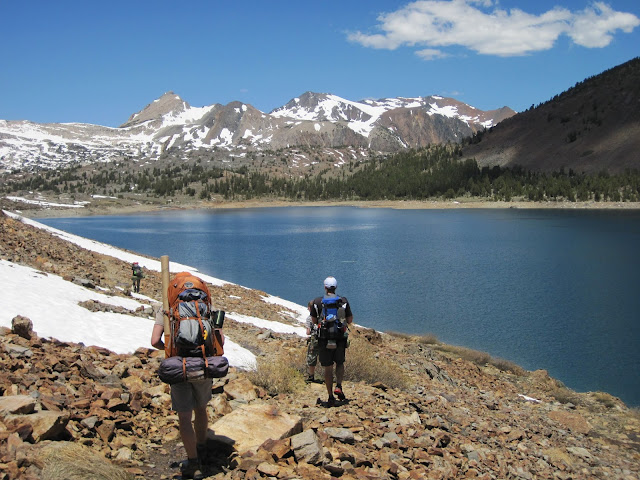 We decided on the Hoover Wilderness area west of Lake Mono and east of Yosemite National Park.  There is a gem up there known as 20 Lakes Basin, and our goal was some early season backcountry up there.  It was early June, and there was still plenty of snow above 10,000 feet, but the weather was near perfect... not too hot during the day and not too cold overnight.  The hike in was only a few miles from the trailhead too, with very gradual elevation gain. 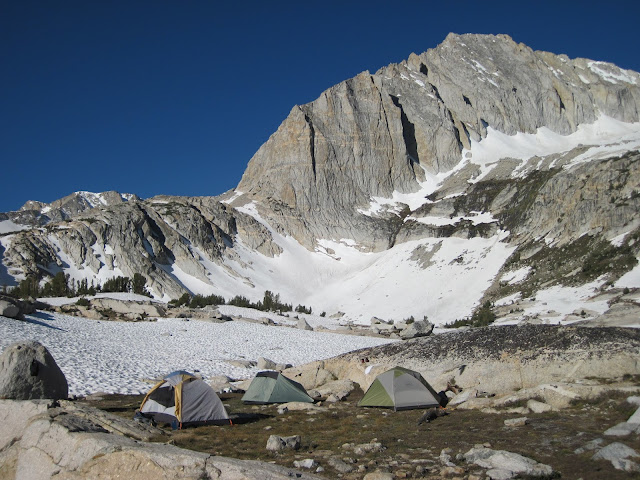 This is where we settled... not too shabby.  The mountain seen here is North Peak.  At 12,242 feet, I wasn't really expecting much, but I obviously hadn't looked at a topo map in too much detail before judging it.  That is a mean looking mountain with those cliffs all around it.  North Peak is one of the dominant features in the area, and it made for a spectacular background for our campsite. 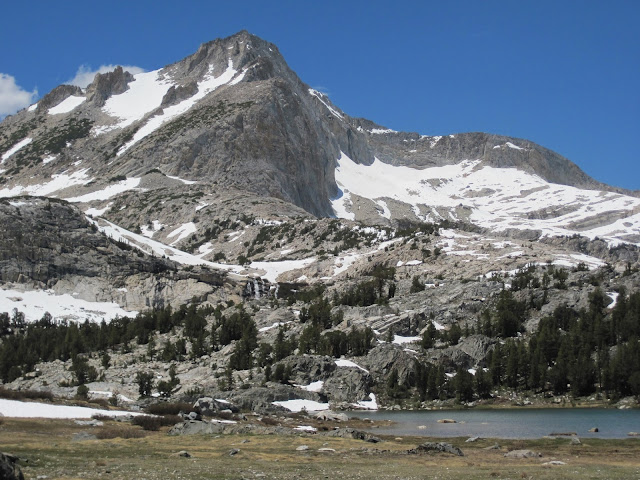 North Peak from a different angle.  They aren't lying about the 20 Lakes in the basin... there are lakes all over the place up there... its really quite beautiful.  The water was cold though and still partially frozen up at the top by our site. 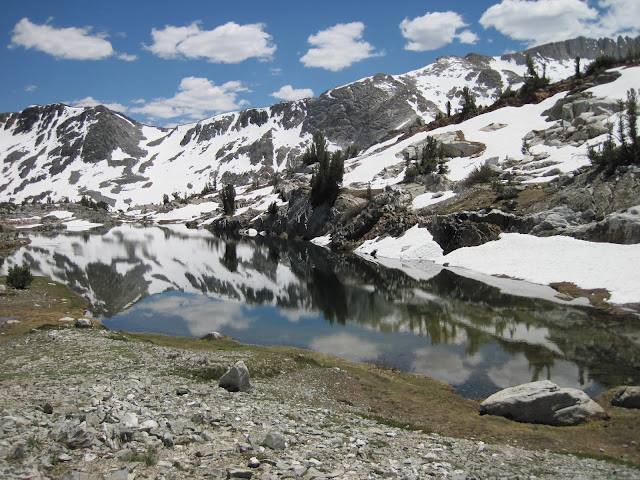 Like I said though, the weather was just beautiful and the sun was warm.  The lakes offer plenty of opportunities for reflection shots too. 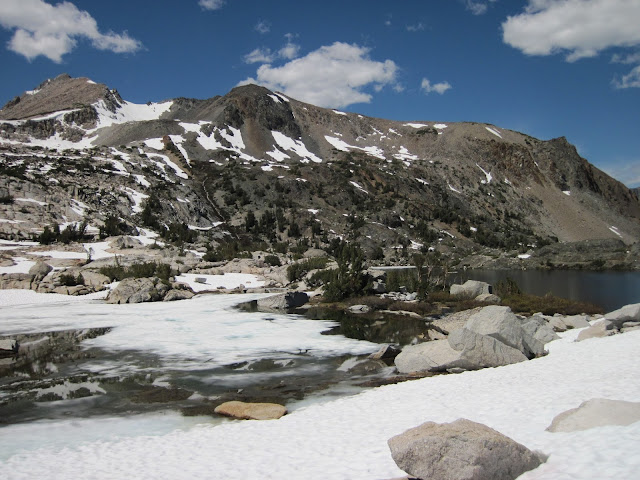 We ended up climbing up to the small peak seen in the left-center of this picture.  It is more of a high shoulder really from the true peak to the left of it seen here.  It was a fun climb for the most part, but the scree at the top was just that... scree. 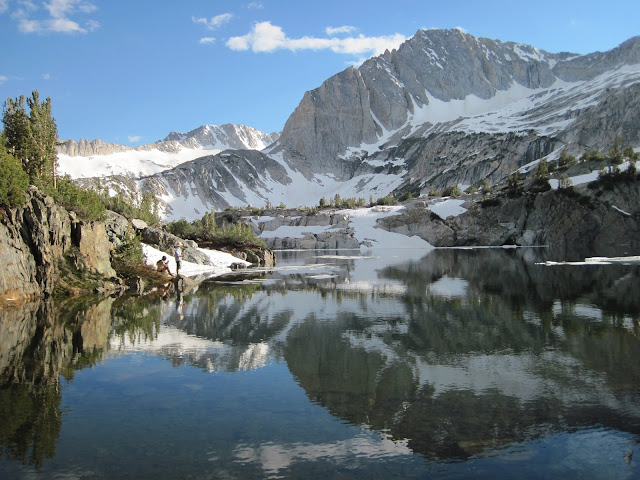 Another view of North Peak from Steelhead Lake.  The few people that we saw up there were mostly fishermen.  Two of the guys I was with gave fishing a shot, but to no real success.  All the trout they pulled in were very, very small.  They were probably the fresh stock. 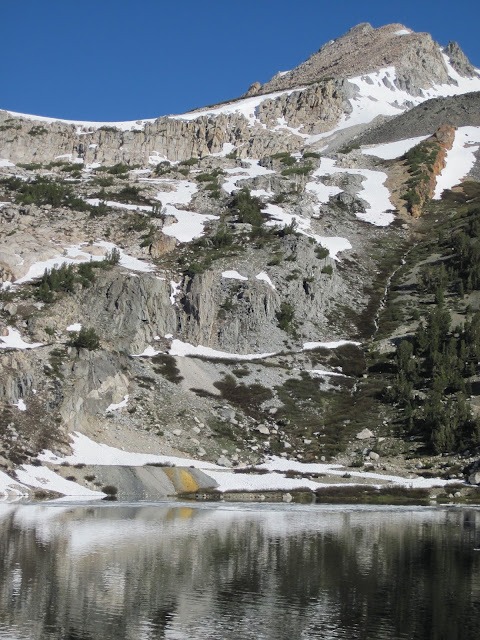 The main trail in is an old mining road.  You can see the bright patch of yellow down by the lake marking one of the old mining spots.  Being spring, there were plenty of waterfalls around too.  This one on the right here was one of my favorites... just a long, slow cascade that has turned its little chute bright green. 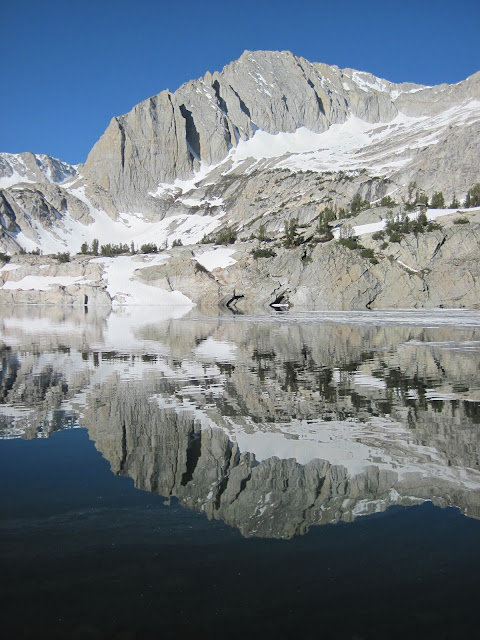 This view doesn't really seem to get old... here you can start to make out the epic couloirs that run up through those cliffs on North Peak... more on this to come. 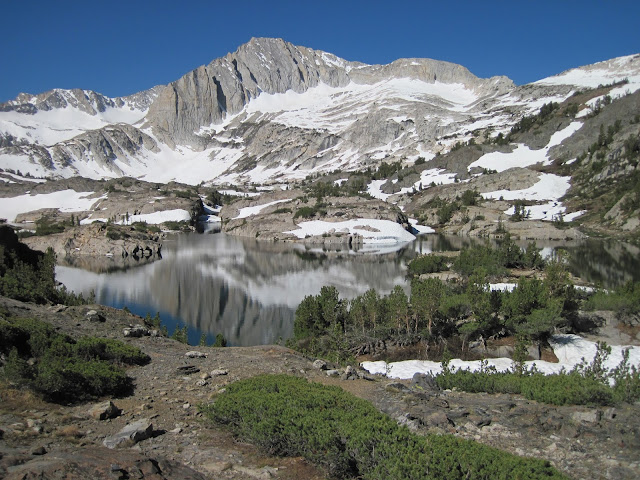 Taking a hike over to Shamrock Lake and the other side of the basin offers a rocky high point with this view back into the basin.  Not too bad.  The thing I loved most was just how empty it was up there... we only saw about a half dozen people in the wilderness in 3 full days. 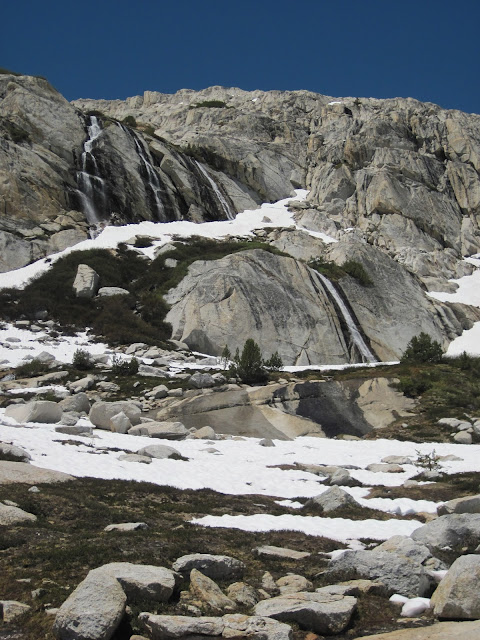 Another set of waterfalls.  I doubt these go all summer, probably just in the spring and early summer when the snow is still there.  So we were lucky to be there when we were. 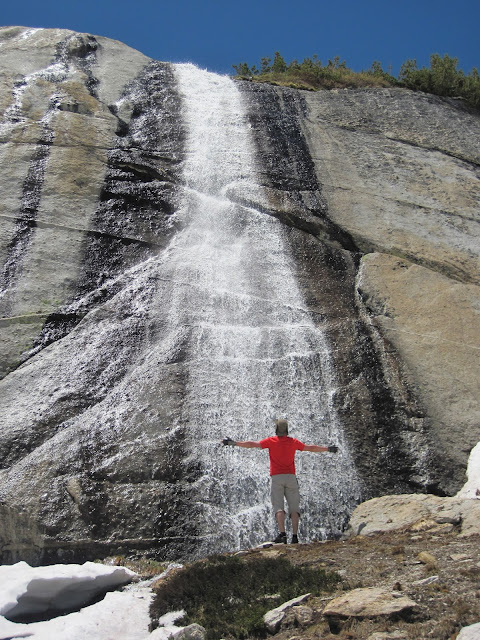 One of my friends at the base...they were a lot bigger then they looked from further away! 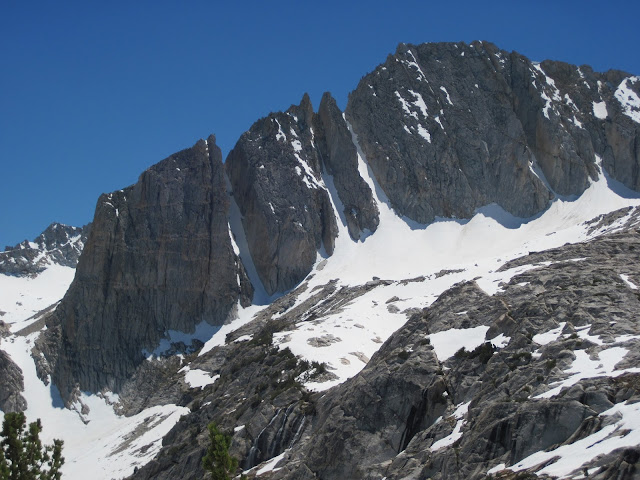 And here are those North Peak couloirs seen face on.  People climb those on their way to the summit.  Very, very impressive. 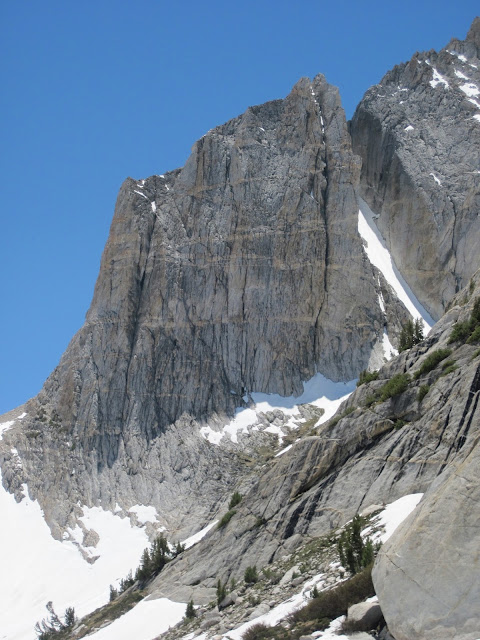 The couloirs are steep, but nowhere near as steep as those cliffs.  The best time to climb them is early morning, when the ice is hardest.  After they've had sunlight on them, the surface gets unstable and might give way, leading to an avalanche.  There were plenty of signs of recent slides, leaving nice long tracks down the couloir and big fans of ice and snow at the base.  There were also some skier tracks from what must have been pretty adrenaline pumping, efficient descents. 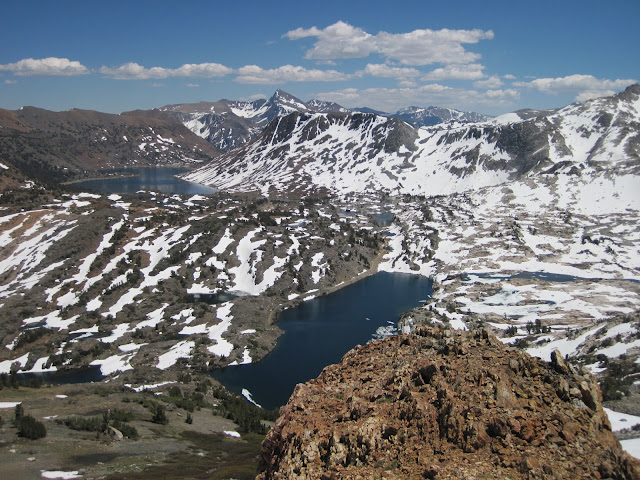 The view down from the way up the shoulder.  This is looking down at Steelhead Lake and Saddlebag Lake in the back left.  I was blown away by the variety of colors in the rock throughout the High Sierra.  It is a much more varied range geologically compared to the Colorado rockies. 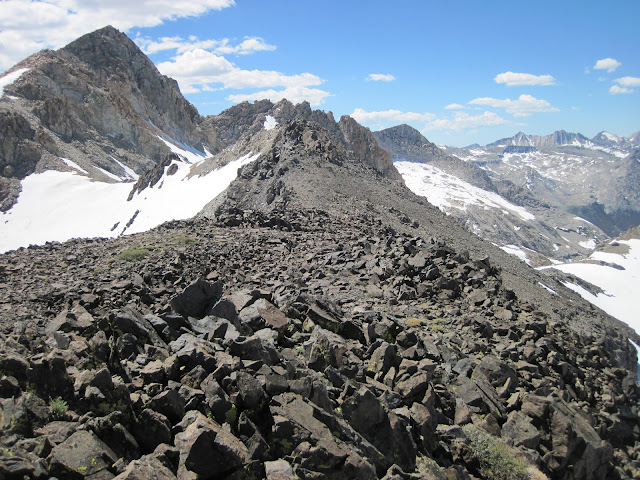 And here are those rocks I was mentioning at the top... definitely not very friendly to weak ankles.  The views were spectacular from up there though... there was barely any sign of humanity in any direction. 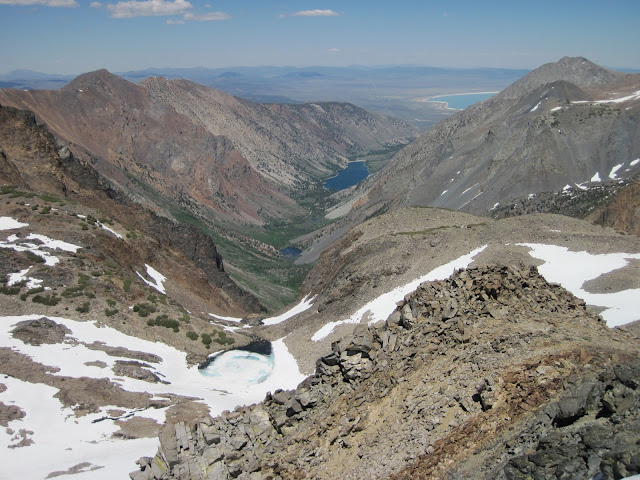 Looking down the other side to the drainage valley and all the way to Lake Mono way down below... the gradient is really extreme there.  I was standing at over 11,000 feet, while Lake Mono sits  at 6,400 feet, almost a vertical mile below. 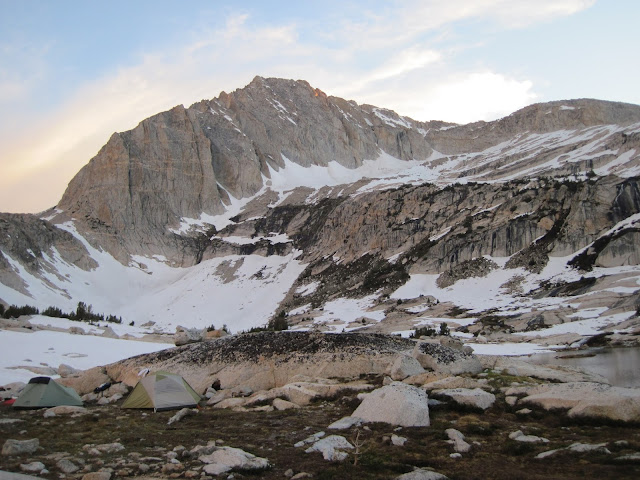 Back at camp for sunset. 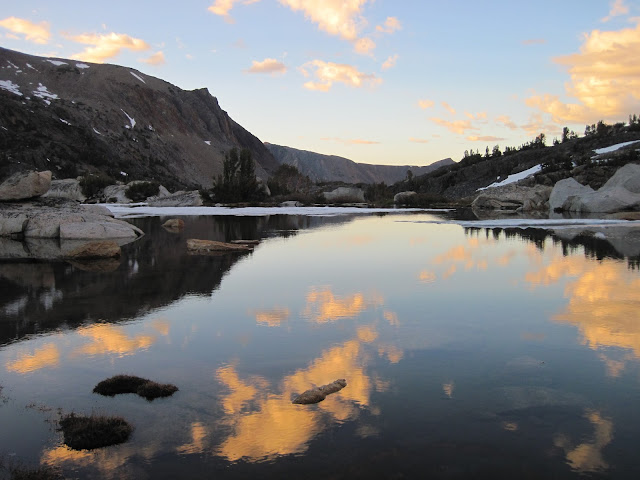 We were treated to a beautiful sunset after a few very ominous looking clouds broke up.  Again, the reflections in the waters were just stunning. 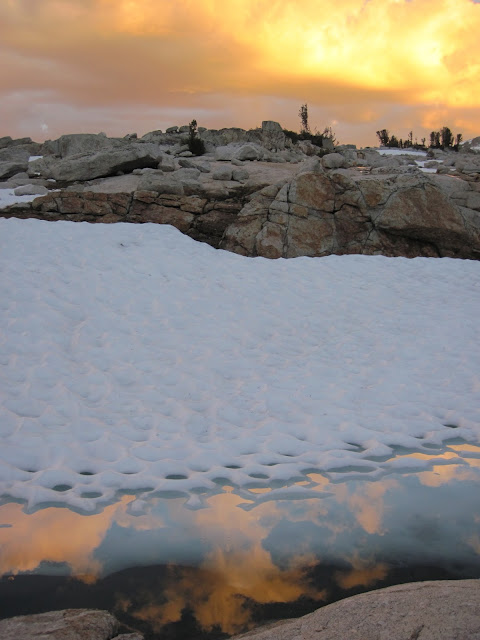 It was a good first trip to the High Sierra overall.  I will definitely be back for more exploring there.
Posted by Drew at 8:21 AM