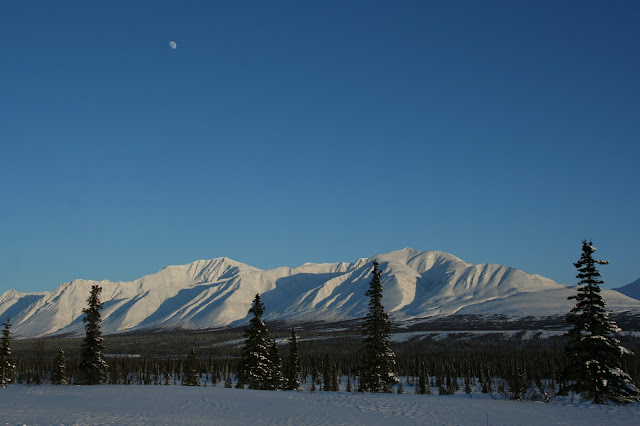 Alaska is well known for its mountains, and being a big fan of the big piles of rock, I couldn't pass up an opportunity to get out into them, despite the guarantee of lots of cold and snow.  My goal was Denali.  I had no ambition of climbing North America's highest peak, but I definitely wanted to at least see it.  We were lucky and got a couple days of clear skies the weekend before the meeting started, so we decided to rent a car and take off for the mountains. 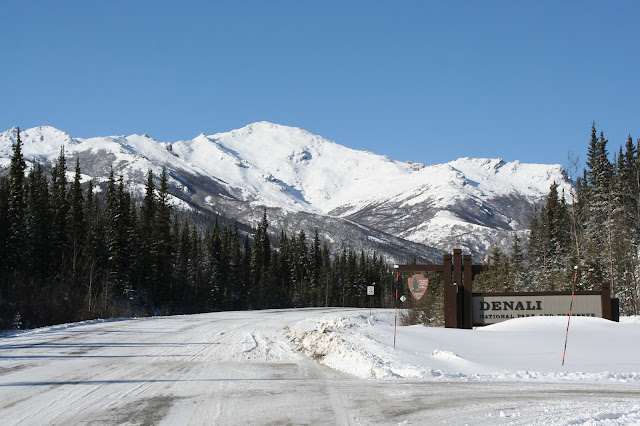 Over 100 miles and 2 hours driving to the south of Fairbanks is the access road for Denali National Park.  This park is huge; when combined with the adjoining wilderness and preserve areas, it covers more acreage (around 6 million acres) than some states in New England!  It is a wonderland for nature enthusiasts, with plenty of healthy groups of native Alaskan animals in a natural wilderness environment that has been largely untouched by people.  The park road is the only road in the park, stretching 92 miles east to west, bisecting only around half of the park.  The road is closed only a couple miles in during the winter and much of the "shoulder seasons" in the spring and fall. 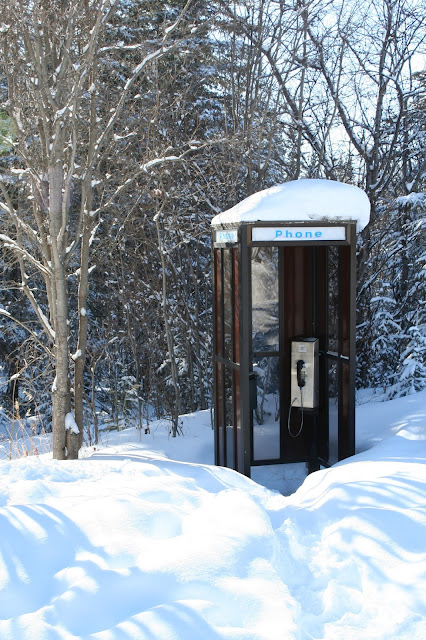 Considering the amount of snow on just about everything, it is no wonder that the park road was still closed at mile 2.  So, we decided to do some snowshoeing around the park entrance and ranger station (which was open). 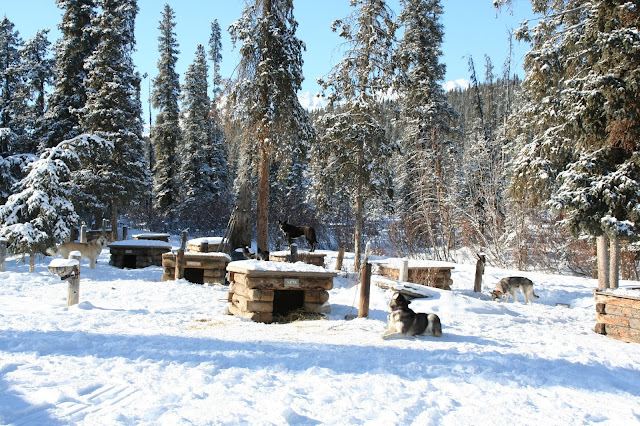 One attraction that is open year round is the sled dog kennels.  If you're a fan of dogs, then you can't miss this stop.  These guys and girls make up the park's official sled team, pulling rangers around the park for patrols during half of each year when the road is closed and snow covers the park grounds. 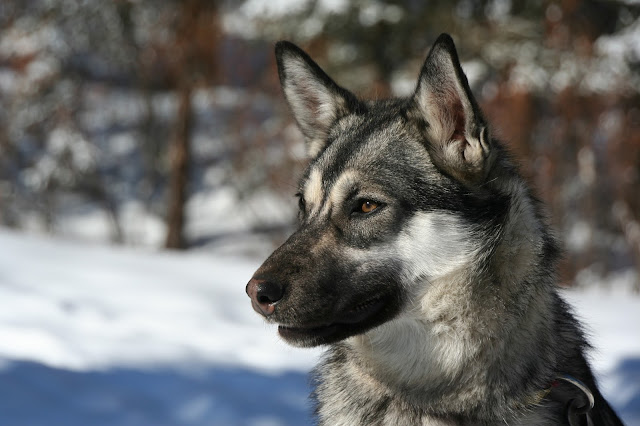 When they're not out pulling the sled on patrol, the dogs are at the kennels, which are open to visitors.  You can meet all of the dogs, who are very used to human contact and seem immensely patient and well trained.  The ranger was telling us that winter is their real break season, since during the summer months they are continually surrounded by the thousands of tourists that visit the park.  We had the dogs all to ourselves though, which was just awesome.  They are beautiful creatures.   This girls name is Tephra. 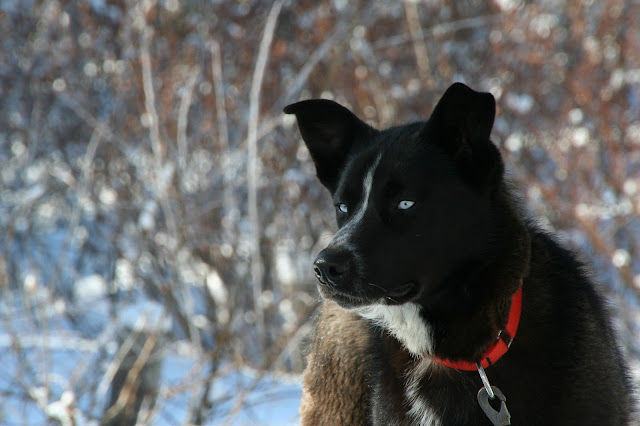 This is Arc.  I had no idea huskies could look like this.  His eyes were a piercingly cold ice blue, and they contrasted incredibly with his nearly all black fur.  It was so nice to be able to pet and interact with the dogs.  I was very surprised that they do this, but the ranger full on promoted it.  She said they need to be used to it to manage all the attention from tourists over the summer. 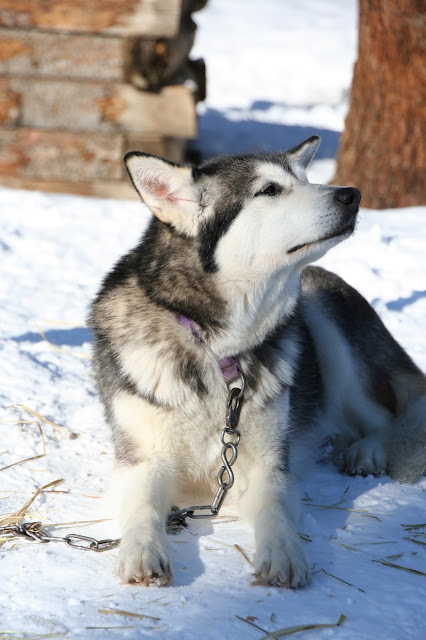 And this is Keta.  It never ceases to amaze me how some animals have adapted to survive in such extreme environments.  I mean, it was cold outside... around -15 degC during the day and much colder overnight, and the dogs were right at home.  Literally... those kennels are where they live, year round.  It's incredible how just that little shelter  is all they need to survive -40 deg and worse winter cold.  It's also amazing how their paws don't freeze.  They know to chew the ice out from between their toes and not to let it accumulate on their paws.  They will curl up and cover their nose with their tails to keep warm.  These actions keep frostbite and hypothermia at bay (when combined with a very effective coat of fur and circulatory system and what must be antifreeze in their blood!).  It really makes you wonder just how miserable some huskies, malamutes, and other cold weather breeds get when they are kept as pets in hot climates... 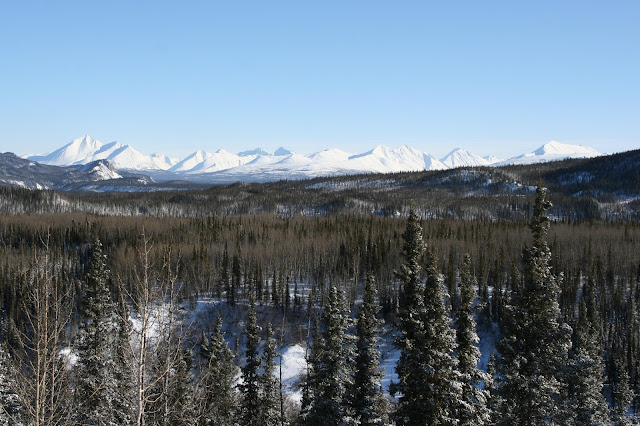 Our first snowshoeing trek took us up Mt. Healy trail.  This offered us some spectacular views of the surrounding wilderness and the Alaska Range of mountains.  It was views like this that I had come for. Even so close to the main road (and the sizable, seasonal community that has established itself at the park entrance), the views were mostly like this... with barely any evidence of humanity blemishing the landscape.  It was spectacular and so refreshing. 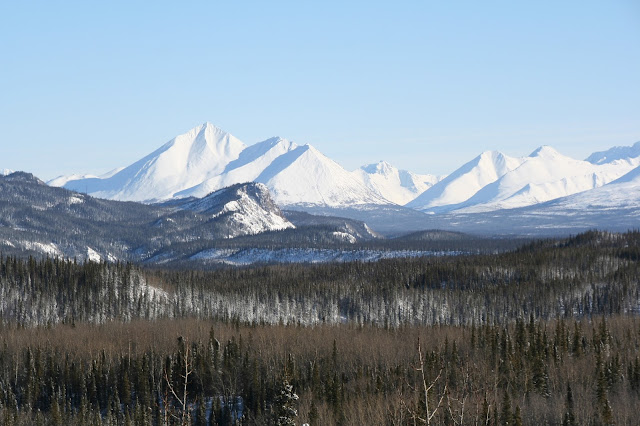 Those mountains were incredibly impressive too.  I'd never seen such a low tree line.  The highway (and the valley seen here) is only at ~1500 feet elevation, and these mountains topped out at only around 6000 feet (still very prominent, but low altitude overall).  It's a clear demonstration of just how cold it gets there in the winter... and how enormous Denali (the mountain) is...shooting up to its summit of 20,320 feet.  This epic height from such a low lying base plane makes Denali the third most prominent peak in the world. 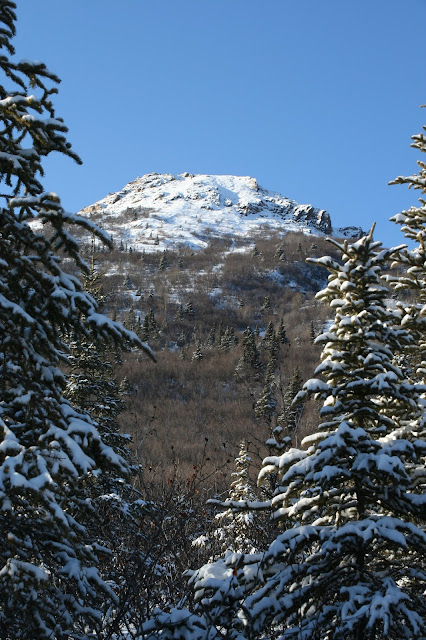 Funny enough, you can't see Denali from the park entrance because of the surrounding peaks.  We were making for Mt. Healy, but we had spent too much time with the dogs.  We were forced to turn around considering sunset.  We only made it ~1/2 way up. 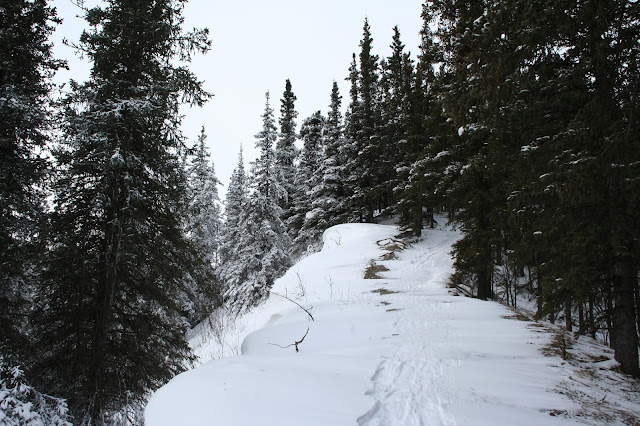 The next day, we woke up to overcast weather and reports and evidence of a heavy overnight snowfall.  Considering the drive back to Fairbanks, on which we did not want to get stuck in a snowstorm, we decided to just do a quick snowshoe down to Horseshoe Lake, very near the park entrance and adjacent to the highway. 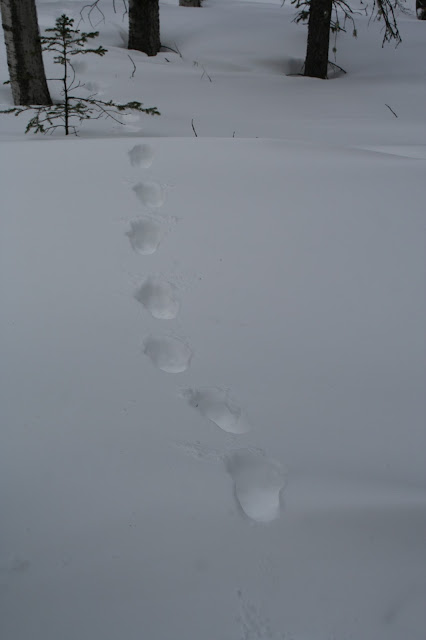 On the way back up from the lake (which was completely frozen over under about 4 feet of snow), we came upon some fresh tracks that had not been there before.  We figured they were from a lone wolf that we must have flushed out of the area when we hiked in.  The reason why we figured they were a wolf's was because of the size (too big for a dog) and the imprints from the claws.  If they'd been from a bobcat, there shouldn't be claw marks, since cats have retractable claws.  The pad only had one lobe too, unlike the two that cats have.  This got me really, really excited.  I have a great appreciation for wolves, and to have been so close to one in the wild was just incredible.  We tracked it for a little over a mile or so, which was pretty easy considering it zig-zagged up along a different trail that went off back towards Mt. Healy.  We didn't see it in the end, but it was still a great experience. 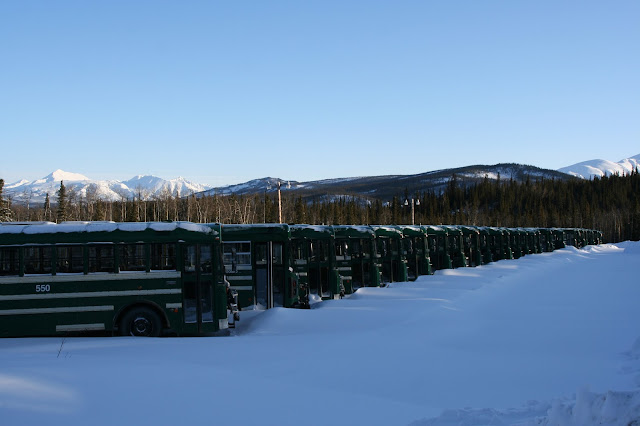 The fleet of buses used for bringing tourists into the park in summer.  When open during the summer months, the road is limited access only past mile 15.  To get any further, you need to take a ride on the bus.  I am looking forward to coming back to Denali in the warmer months to do some backpacking, and I'll be taking one of these buses in to do so. 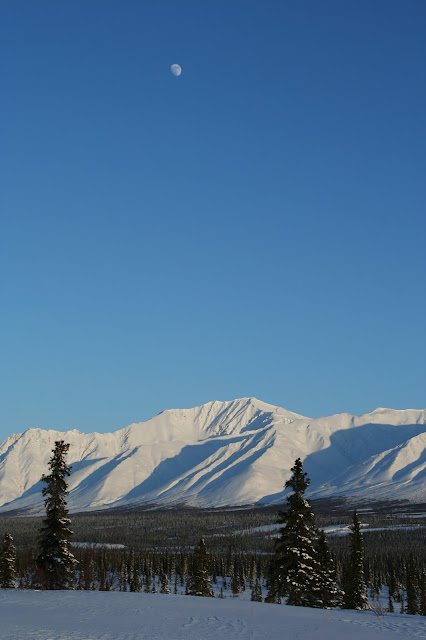 Back on the road on the first day, we had a lovely sunset as we drove south of the park to try and catch a glimpse of The Mountain. 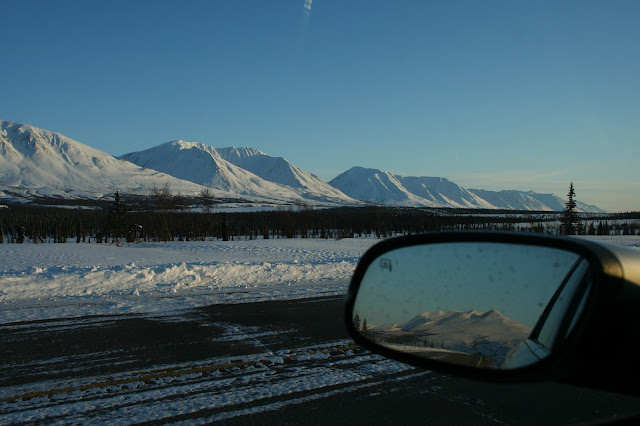 The combination of the brilliantly white snow, the cold clear blue sky, and the setting sun just put on such a beautiful show. 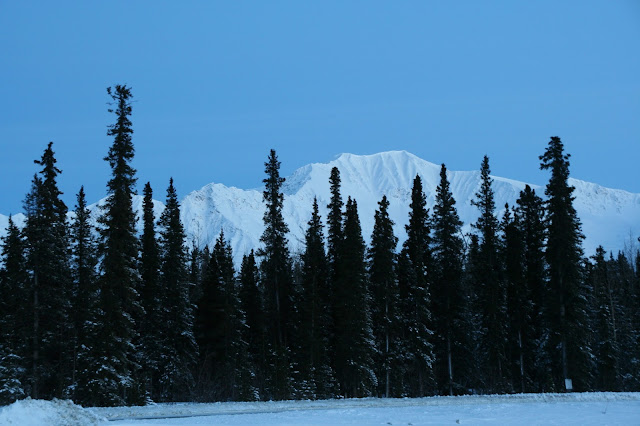 As the sun set and went below the horizon, the mountains just kept changing.  This lighting at twilight was eerie... it was brightly cold, contrasting so much with the warmer hues from when the sun was still above the horizon. 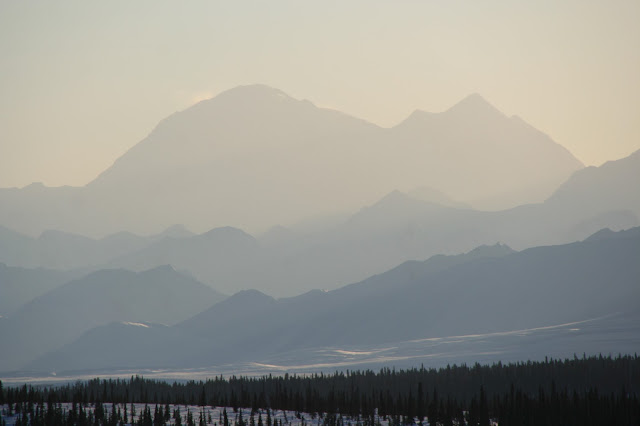 At last, the granddaddy itself, and the very thing I had come to see: Denali.  It was huge, even at close to 80 miles away.  The mountain dwarfs everything around it, making 12,000 to 14,000 ft, highly prominent peaks look like foothills (because that's exactly what they are around Denali).  We only saw it twice, once in this lighting, with the sun setting behind it, and once the day before on the drive from Fairbanks, when we had a spot on the road where it loomed before us, over 100 miles away, like a ghostly behemoth on the horizon, deceptively large.  This is the highest mountain in North America, and it was terribly impressive, even from so far away.  It is permanently glaciated and a very technical climb, for those brave and/or crazy enough to attempt it.  Like I said, I have no ambition of climbing it, but I can definitely appreciate its grandeur, and that of the epic wilderness surrounding it.  The Alaskan wilderness cast a spell on me... I will return to spend more time in it... one of the perfect escapes from the stress and distractions of human life. 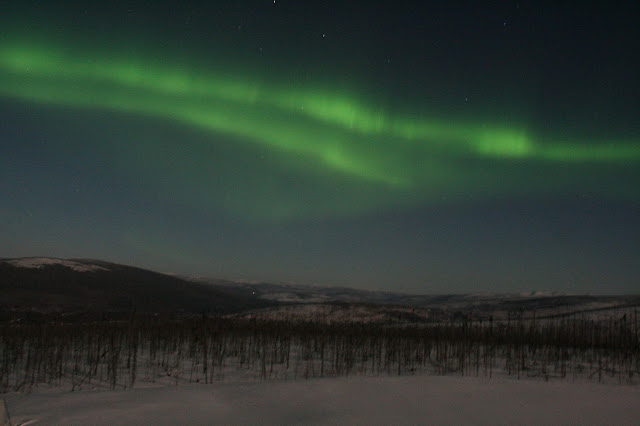 I figured I'd end this post with some more aurora shots... this was a couple clean arcs with bright spots that formed and persisted for quite some time. 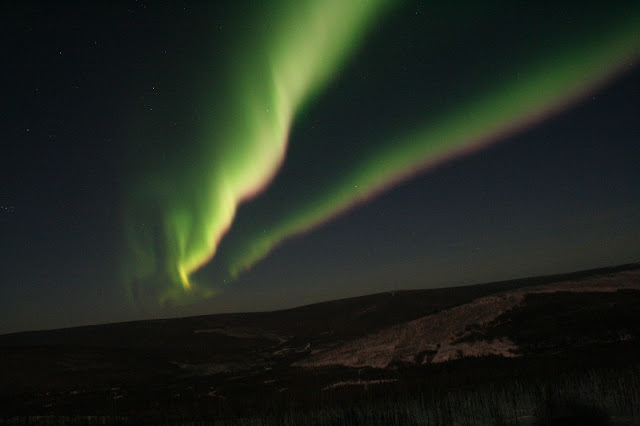 At one point the southernmost of the two arcs brightened and appeared to twist... it was quite spectacular. 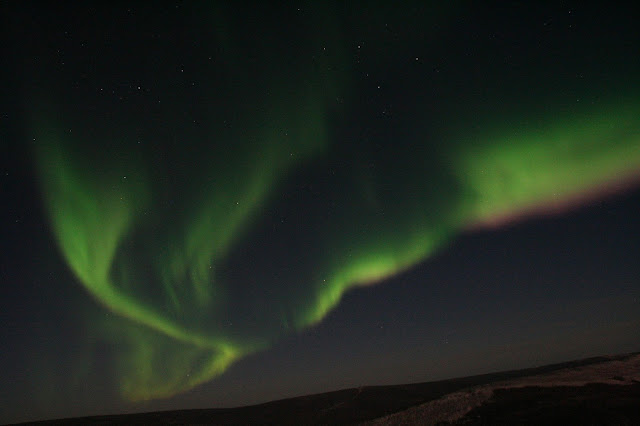 Eventually the two arcs broke up, as they normally tend to do. 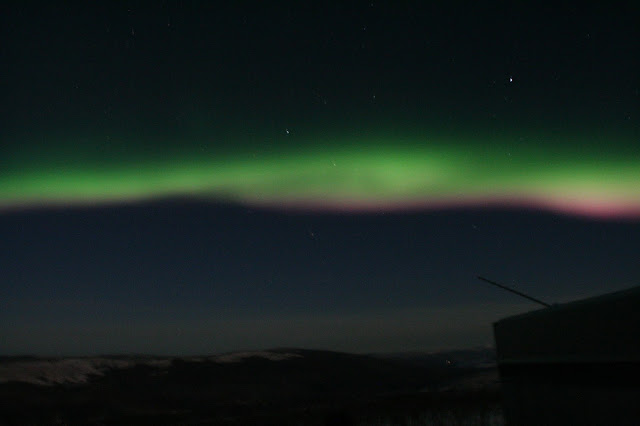 We had some lovely reds along with the greens in some of these too.  This arc was very bright and incredibly stable.  So, whoever may call you crazy for planning a trip to Alaska in winter is just wrong.  There are plenty of things to do and the state is just as spectacular and beautiful in the winter as it must be in the summer, just in a different way.   I'll try and make my next trip to Alaska in the summer and test that theory for myself.
Posted by Drew at 9:59 PM


Therefore glad I found your website searching for shoes.
This is great information at any given time when the internet is full
of falsehoods. Keep up the task in "Link to another good article from Allen Wright" and that i can
come back often. Looking for large dog breeds for families Wondering what large dog breeds are good with kids or would be good for apartments Find out here A complete list of large dog breeds

Your article is very interesting. And you have decorated your art beautifully. It inspires people a lot. If the subject is good, then it is also fun to read and this is what people want nowadays, your post is really interesting. Inspired by you, I too think I should write an article on a fun subject.
Call Girls Palam Vihar
CAll Girls Huda Metro
Call Girls Phase 1
Call Girls phase 2
Call Girls phase 3
Call Girls In manesar
Imt Manesar Escorts Service