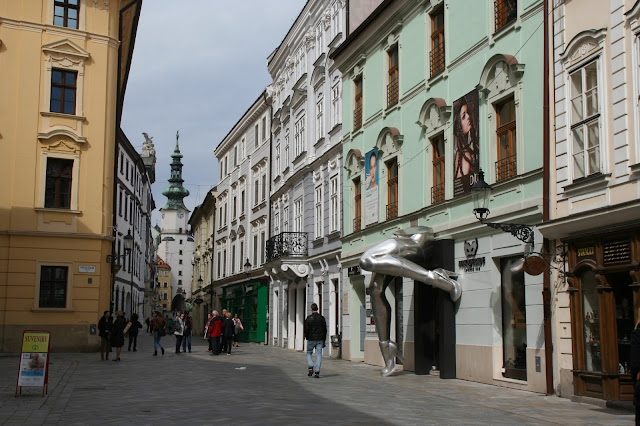 I'm quite lucky that I get to travel so much for work.  I'm even luckier that my employer and line of work is so open to personal travel before or after work trips.  Since I have been privileged to spend a week each of the past three years in Vienna, Austria, I figured this year that I would take advantage of that to get out to one of the neighboring countries.  I had grand schemes of taking a road trip to Slovenia for a few days, which fell apart thanks to that awfully steady and inevitable ticking of time, but instead I managed to steal a day to visit that similar sounding neighboring country of Austria: Slovakia.  Bratislava, the capital of Slovakia, and Vienna (the capital of Austria) are nearly twin cities, and the Eastern European capital makes for a very enjoyable day trip (or longer, I'm sure) from Vienna! 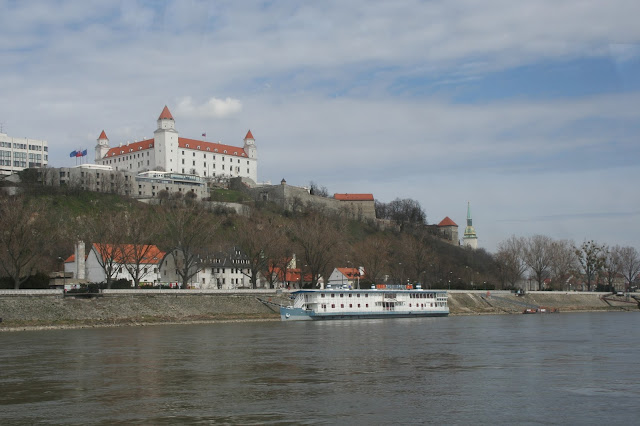 Only ~60 km of Danube River separates Bratislava from Vienna.  You can take a high speed ferry between the two in only an hour.  That is pretty awesome considering the noticeably different cultures and obviously different histories of the two cities (and countries).  When traveling to Bratislava by ferry from Vienna, you know you've arrived when you see Bratislava Castle perched in white perfection up on the hill beside the Danube.  This was one of my first views of this interesting city. 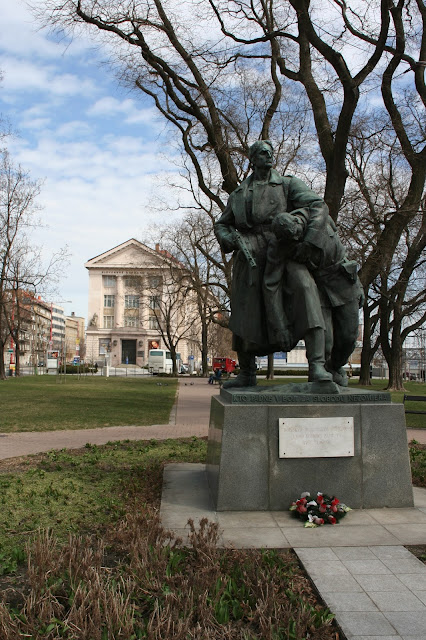 Fresh off the docks, and I noticed this statue.  It was remarkably Soviet-like... reminding me a lot of similar statues I'd seen in Russia. 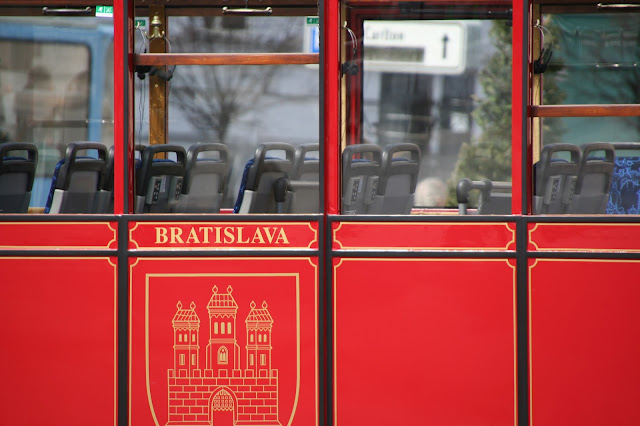 Slovakia is not Russia though, and it was not Soviet.  It was Soviet-occupied during the Cold War era after WWII though, and for even longer it was lumped together with the Czech Republic to form Czechoslovakia.  Slovakia gained its independence as the Slovak Republic in 1993, though.  The country is thriving now, with one of the fastest economic growth rates in the European Union, of which it is also a member state. 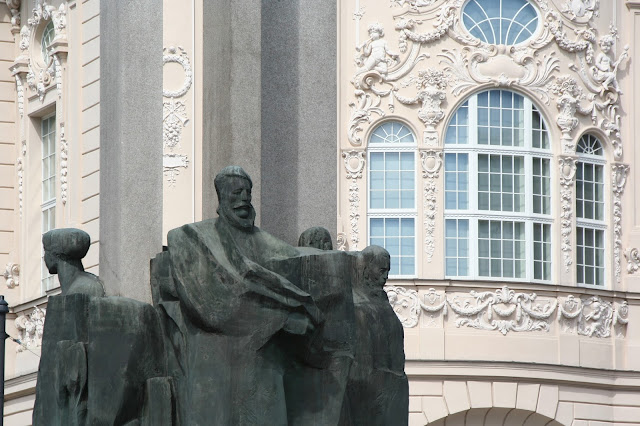 Like most of Eastern Europe, Slovakians are primarily a slavic people (as the name of the country might suggest).  I was immediately pleased by how pleasant and beautiful Bratislava's center was.  It helped too that it was a near perfect spring day. 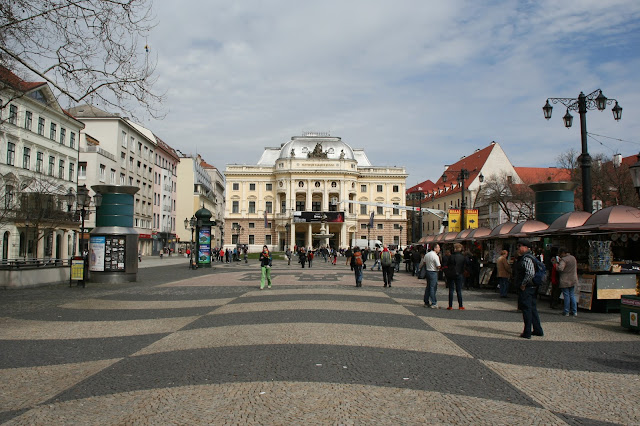 I did my tourist shopping at the little stalls here.  I always have to get a flag patch for my backpack if I can find one, and I did find one here.  This interaction left me with a positive first impression of Slovakians...they seemed very friendly, which was confirmed again and again throughout the day. 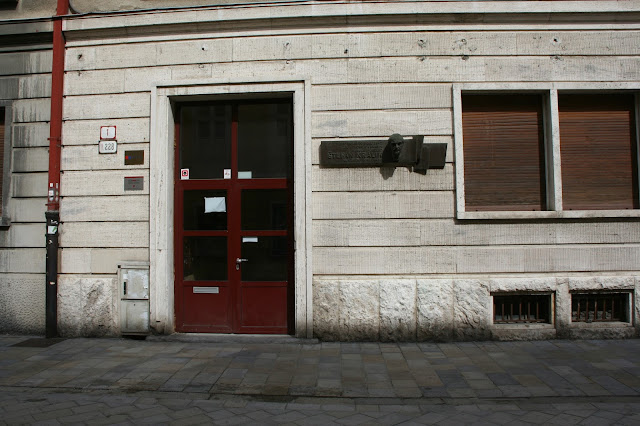 I was shocked by Bratislava's beauty.  Not only are there some architectural gems, but there are interesting statues and plaques all over the old city center.  It is a great place to just wander around and get lost, taking in all the neat and odd little details.  That will be the main focus of this post. 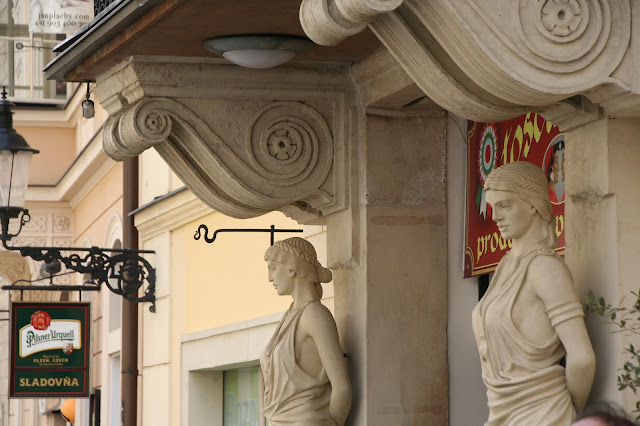 It seemed like most of the beer advertised there was Czech, which is not at all something I'm complaining about!  I love Czech beer.  The prices were incredibly cheap for Europe too, both for food and drink. 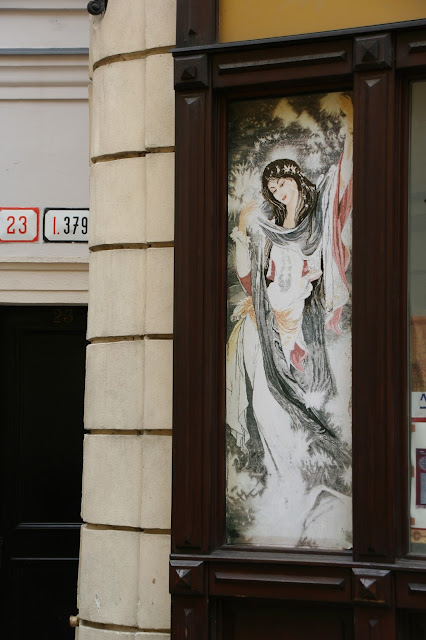 This reminds me a lot of a picture I took in Nikko, Japan... 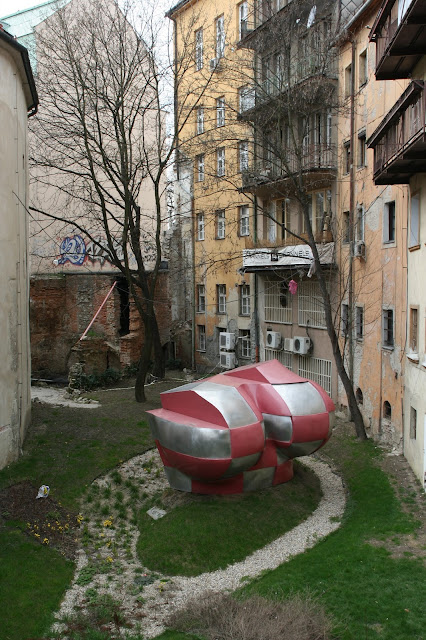 And, we start with the bizarre.  I definitely did a double take when I saw this massive statue down in this courtyard below a beautiful old pedestrian bridge.  Can you say random?  Hilarious too... just a great big pair of tits.  Awesome. 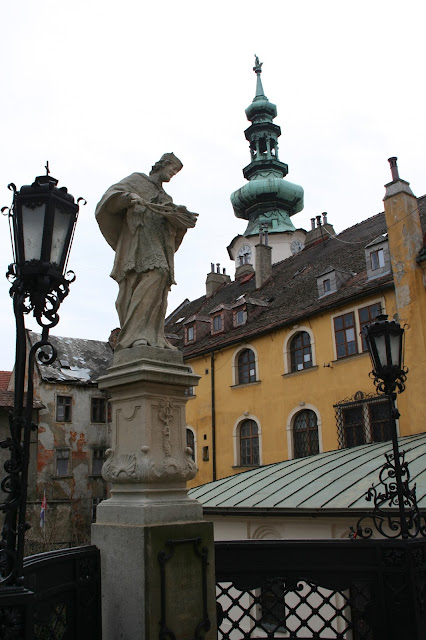 From the view down on the tits, turn around 180 degrees to see this view... like night and day. 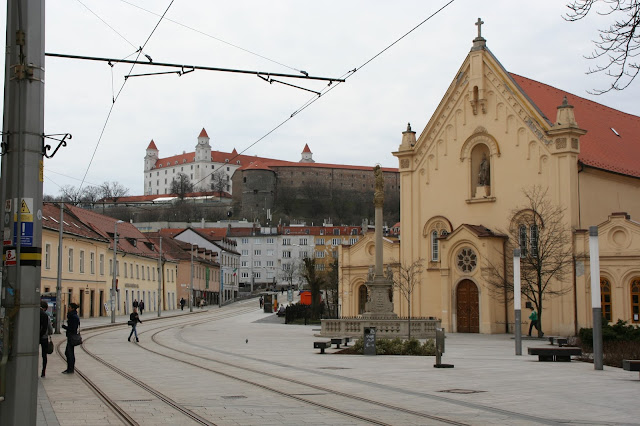 I was there in Bratislava on a Wednesday, but the city was very, very quiet.  Eerily so at times... it was as if there was some notice about a zombie apocalypse or something that I just hadn't received yet.  It was a neat feeling that just added to the overall quirkiness of the city. 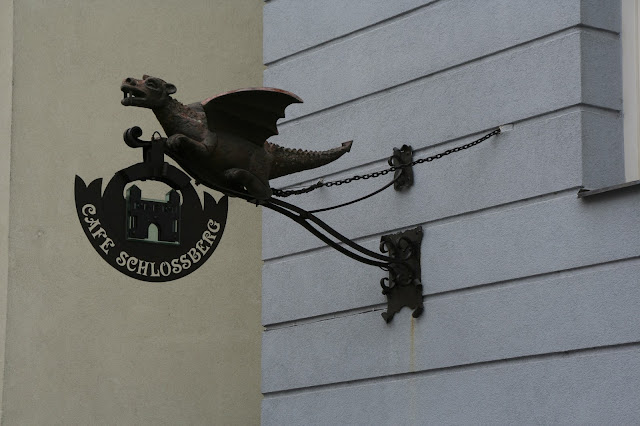 Another great example of those little touches that just add so much character.  There were lots of these dragon signs around, which reminded me quite a bit of Sopron, Hungary.  Apparently, it was a popular thing to do in the region.  All I can say is, I like it. 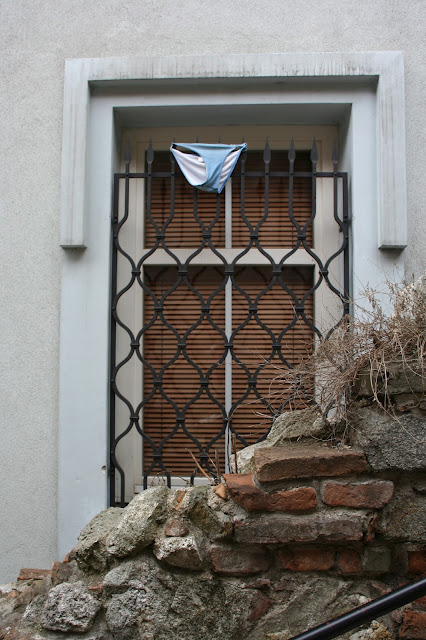 Back to bizarre... seriously random things like this were all over the place. 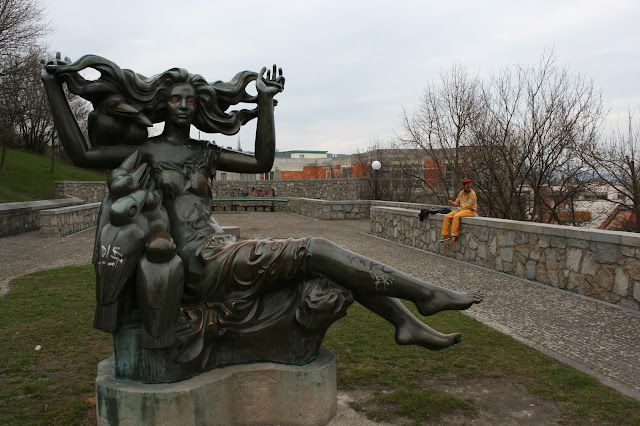 And then there was this statue (and the guy in the background... interesting outfit, eh?).  Seriously, what is going on here?  And why are her eyes red?  Creepy. 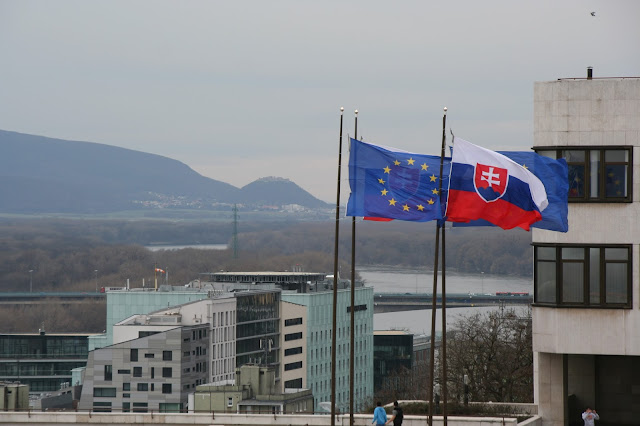 Up at the castle, you can get some nice views of the river, city, and surrounding area. 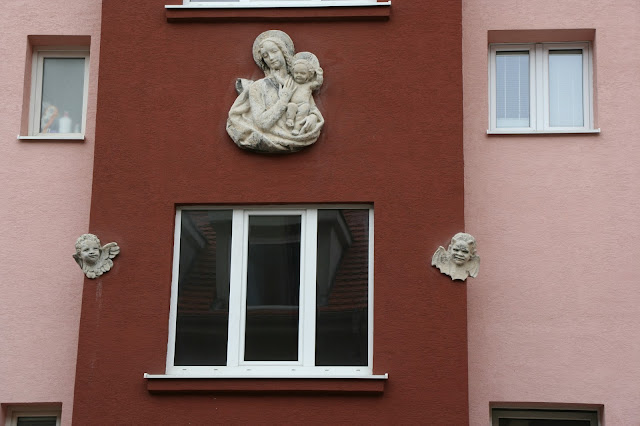 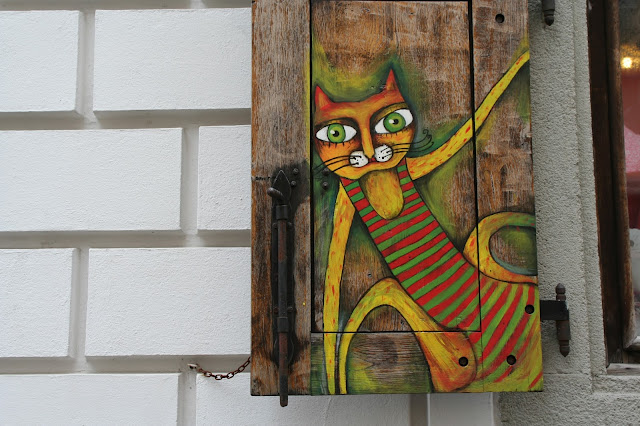 I swear I've seen very similar shutter paintings in Toulouse, France and Milos, Greece... regardless, just another example of those little touches of character that really liven up a place. 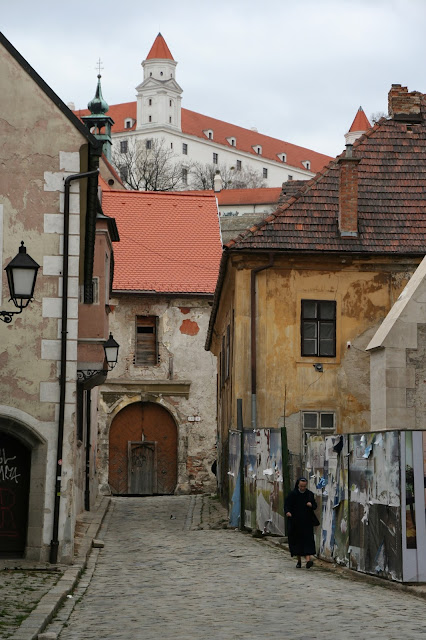 This lane just oozed character... with the peeling paint and crumbling plaster, the boarded up window, graffiti, and the perfect, white castle up above it all. 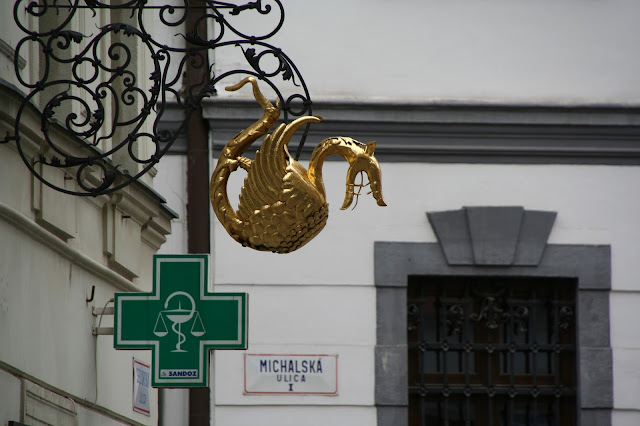 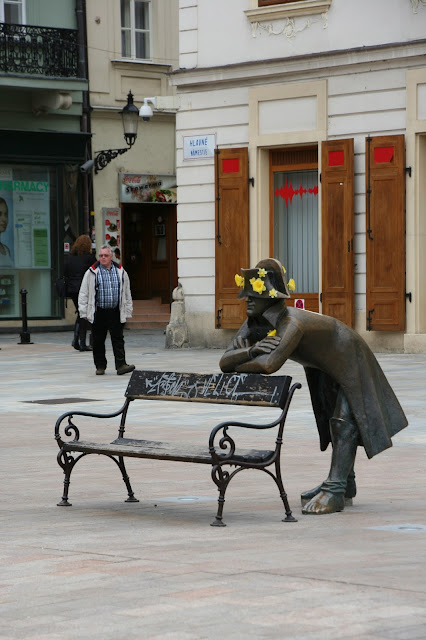 This was one of a series of statues... random characters posed around the city.  I don't know if the flowers are a permanent fixture, but they add such a nice burst of color and seem to bring the statues to life. 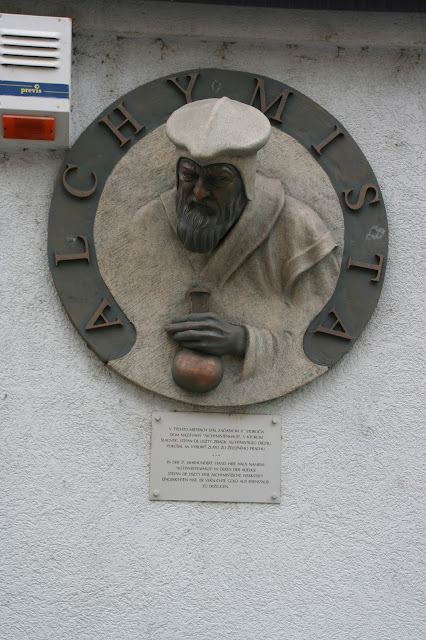 If you come across this place, check out the little cafe/bar there (also called the Alchemist)... it's awesome.  The building itself, supposedly an old alchemy shop, is beautiful inside, and the cafe is well done, with a very fun and interesting menu (good, homemade, natural foods) and great drinks (both alcoholic and non). 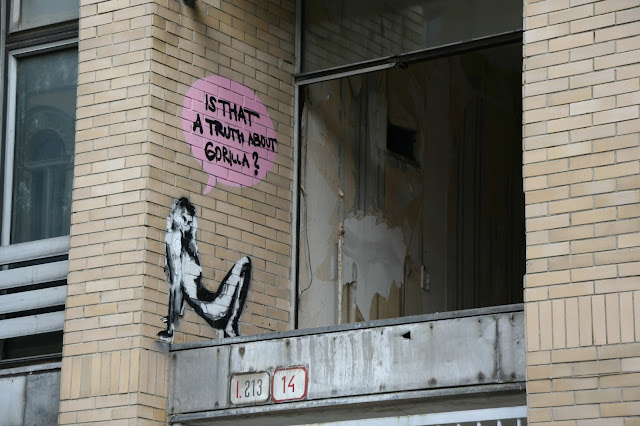 Soooo random... just loved it.  This is street art well done.  It makes you stop and think and maybe even chuckle. 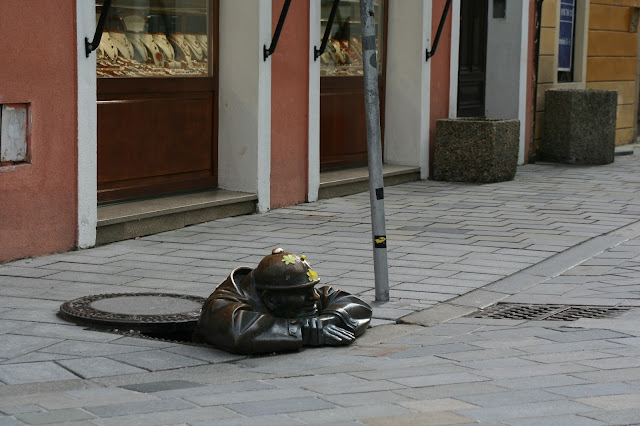 Another statue in the series... this one particularly creative.  Obviously, others really appreciate it too as it is featured on many postcards. 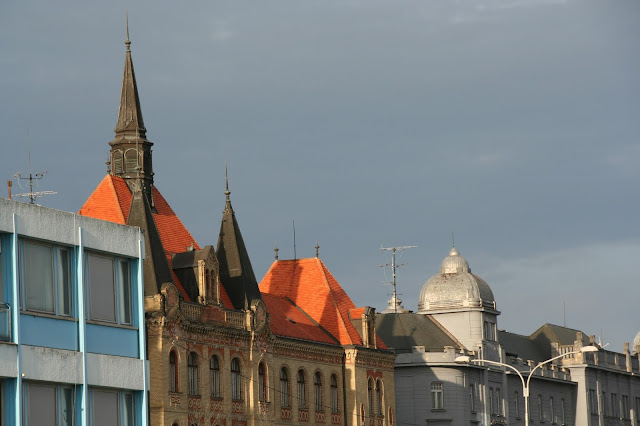 Setting sunlight from the boat back to Vienna.  I definitely want to return to Bratislava and spend more time... it is a lovely city with an incredibly fun and quirky character.   I'd also love to get out into the Slovakian countryside, particularly up into the Tatra mountains along the border with Poland.  It looks like a beautiful country and I thought the people were just great.
Posted by Drew at 12:11 AM

Buletin Doa said...
This comment has been removed by the author.
7:53 PM