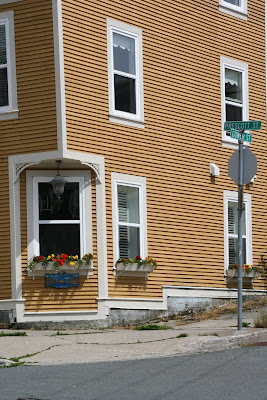 I had three days between when I returned from Moscow and when I had to take back off again for a conference in St. John's, Newfoundland in Canada. I must admit, I was very excited to see a different part of my native country, and I had heard good things about Newfoundland, despite all the silly jokes. I wasn't let down. 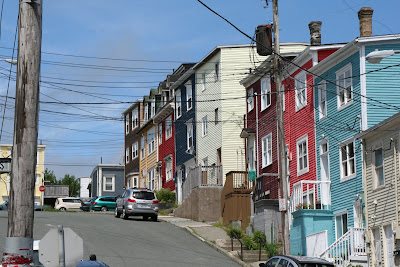 If two countries were able to reproduce, then Newfoundland would surely be the love child of Canada and Ireland. I was absolutely floored by how similar Newfoundland was to Ireland, in literally everything from its geography, climate, architecture, accents, and culture. The first thing to reveal this to me were the technicolor houses. All shades of color seemed to have been used throughout town...and as with Ireland, I suspect this is just a little something to keep spirits a bit higher when foul weather sets in. 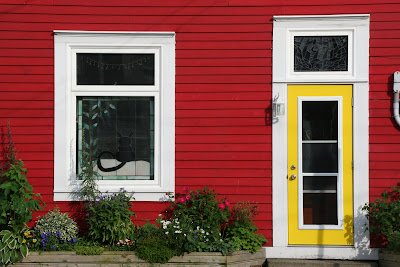 My next wave of realization came when I stumbled upon George Street, a pedestrian only affair consisting of over 50 bars and pubs. I got in on a Friday night, and needless to say, the place was rowdy. The majority of the pubs are in the true Irish style, traditional music sets and all! I found a great place with modern Canadian folk though (think Great Big Sea or Spirit of the West), which was just what I wanted from live music in Newfoundland. 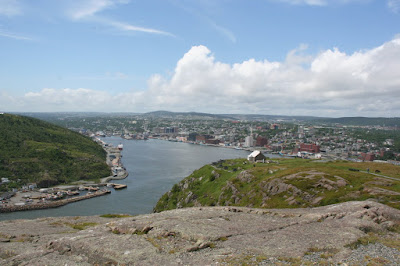 St John's sits on a harbor on the Eastern tip of Newfoundland Island. The island itself is truly massive, another fact I had not at all appreciated before getting there. I was floored talking to some Canadian tourists in the bar when they told me it took about 7 hours to drive across it on the Trans-Canada Highway, which is by far the fastest way across the island! Looking in more detail at a map however, this is not surprising; Newfoundland Island is as big or bigger than many Eastern US states. So, I resigned to the fact that I would only see the Province of Newfoundland and Labrador's capital (St. John's) as well as a little sample of the small area around it. I'm hoping to get back to Newfoundland at some point though, as it truly is a beautiful and fun place (in the summer). 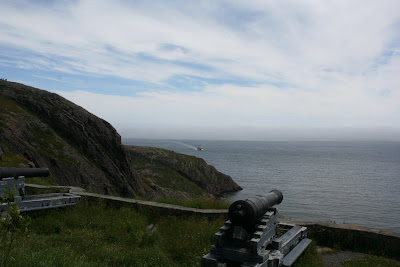 On the walk up to Cabot Tower. The mouth of the harbor was heavily fortified up through WWII, being such an important point on the trans-Atlantic journey, both by air and sea. It was quite interesting to find out that St. John's had one of the busiest airports in the world for some time since most flights had to stop there for refueling between the Eastern North American coast and Europe. 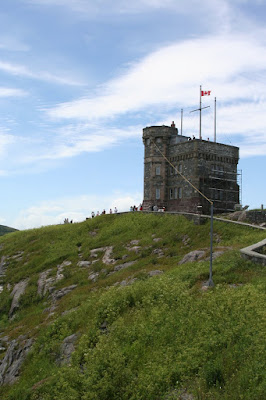 Cabot Tower, one of St. John's key landmarks. It sits atop Signal Hill on the northern edge of the harbor's mouth. It's named after John Cabot (Giovanni Caboto), and was built to commemorate the 400th anniversary of Cabot's "discovery" of Newfoundland. Truly, First Nations people had discovered Newfoundland more than a millennium earlier, and then it was "rediscovered" by Norse (Viking) explorers in the Dark Ages. I was interested to hear that Newfoundland is still a very popular destination for modern Nordic people, some of which even make the journey by sailing ship from Scandinavia! Apparently, the Norwegians are big fans of this trip...I met several at the bars. 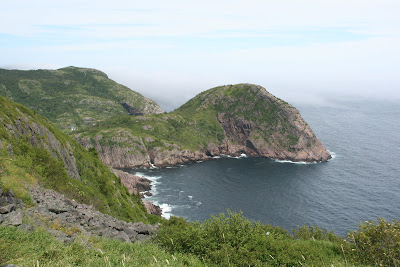 I mentioned the geography of Newfoundland reminded me a lot of Ireland. By "reminded me", I mean it was damned near identical! A lot of the photos here are coastal landscapes...I won't say a lot about them, but everything from the ruggedness of the coast to the colors of the rock and flora are just like Ireland. Someone even remarked that they look so close because it really is the same rock that makes up both places. Whatever it is, the resemblance is remarkable and definitely explains why so many Irish decided to settle there (explaining the incredible similarities between cultures). 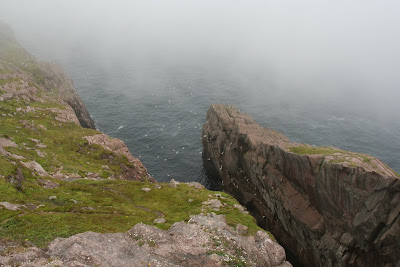 Looking down at seabirds on the cliffs. 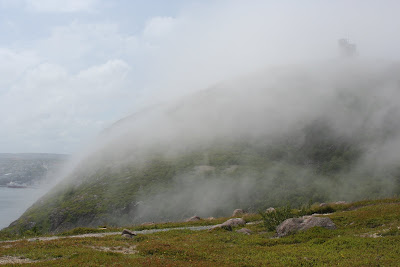 This amazing sea fog rolled over me while I was walking back down from Cabot Tower... 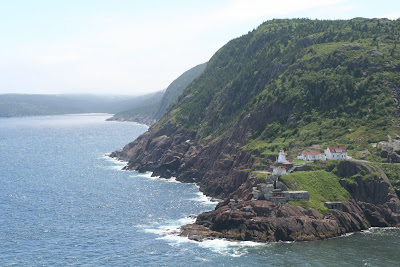 Looking across the mouth of the harbor to the lighthouse on the southern side. With mist like I just showed, it's no doubt how important lighthouses are to sailors around such rocky and jagged coast. 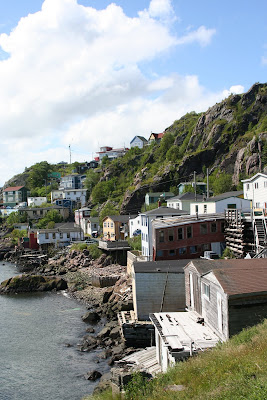 On the walk up or back from Cabot Tower, you go through this delightful little part of town: the Battery. Named after the guns that used to defend the harbor, it is now a sleepy little fishermans community of shanty houses clinging to the cliffs. 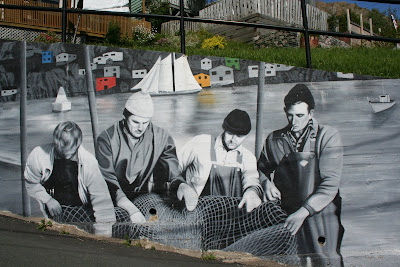 Newfoundland has a long and proud fishing heritage. The Great Banks just off the coast were once the most fertile seas in the world. As with most seas though, they have been overfished and fish populations are now devastated. Seafood is still the major ingredient on all menus in town though, with cod being a local favorite. One of my favorite things to try was the cod tongues. They are exactly as the name describes, the tongues cut out of cod, battered, and fried up in oil. They taste a bit like calamari, with a slight cod/fish flavor (no kidding) and less-rubbery consistency. Another great one was cod au gratin...cod baked up with mashed potatoes smothered in cheese...mmmm. Apparently, seal fin pie is also a popular one, though I couldn't find that anywhere. 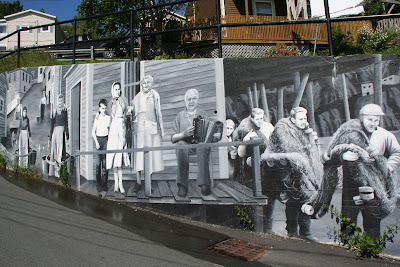 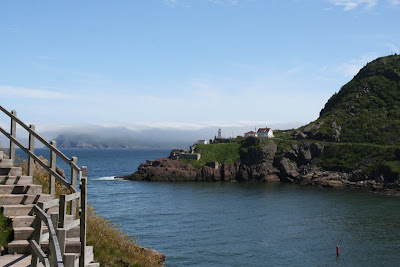 In the distance on the left of this shot (looking back out of the harbor mouth) is Cape Spear...the easternmost point in North America (funny since it's on an island, but whatever...Key West claims the southernmost point in the contiguous USA). Some friends from the meeting and I ended up renting bikes and taking off both north and south from St. John's, including all the way out to Cape Spear, which was a bit of a haul, but beautiful. 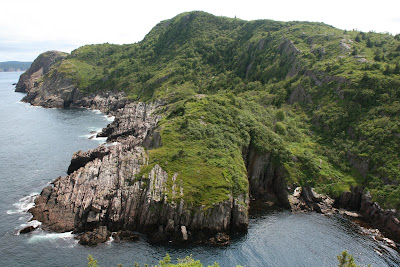 Another example of the beautiful and complex coast... 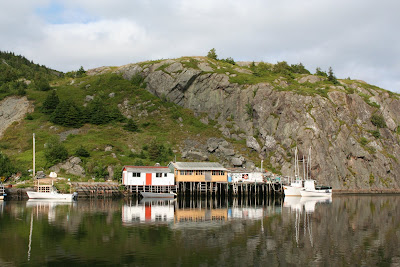 The fishing village of Quidi Vidi...just outside of town 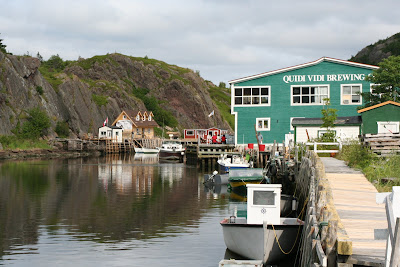 Yes, they have a brewery, and the beer is GOOD! 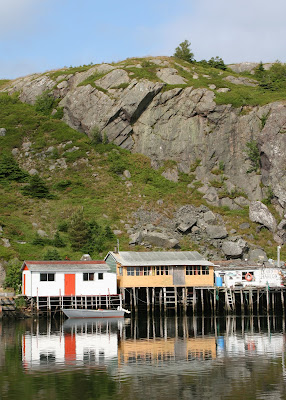 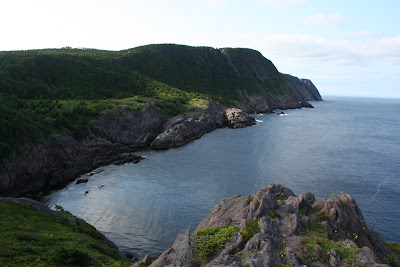 Further up the coast along Marine Lab drive 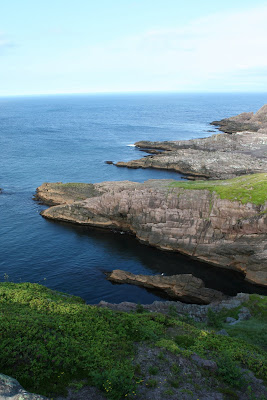 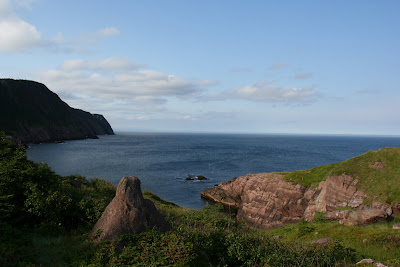 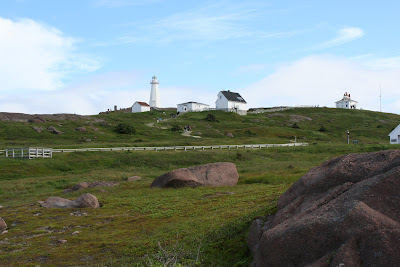 And Cape Spear...we were treated with some extra special sights here in the form of whales! There was a pod of humpbacks off the coast, and they treated us to a hell of a show. We even saw two of them fully breach out of the water! It was amazing! 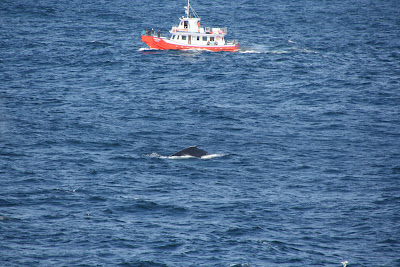 It's funny, I had expected to see puffins, hoped to see iceburgs, and planned on not being lucky enough to see the whales. As it turned out: I saw whales practically every time I was in viewing distance of the Atlantic; I found out that I was there in totally the wrong time of year to see ice burgs at St. John's (though there were some truly unbelievable pictures of the towering behemoths making micro-machines out of tanker ships and molehills out of coastal cliffs and hills); and didn't see a single puffin (they live on islands off the coast supposedly). The whales were such a great surprise though! I've loved these animals since I was a child, and to see them obviously doing quite well off the coast here was spectacular. 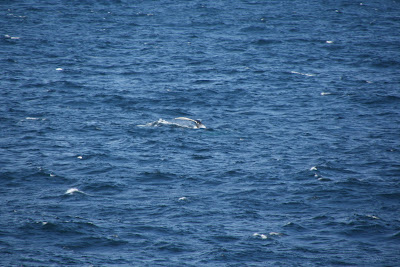 Newfoundland is amazing. It's as simple as that. The people are great. The food and culture are awesome. The painted colors of St. John's row houses are warm and inviting, and the geography is breathtaking. It is a true gem of a place.
Posted by Drew at 9:45 AM