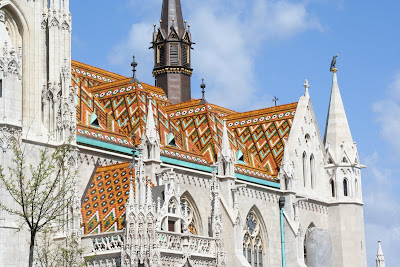 We were in Budapest for 4 days. Being the capital city of such a proud and unique country as Hungary, the city has much to boast. Above and beyond the Hungarian side of things, which is great on its own, you also have all the positive influences leftover from Hungary's many previous occupiers, which affect everything from the architecture to the food and luxury. 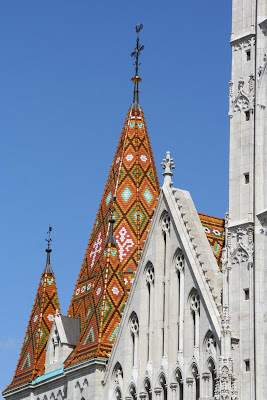 This lovely piece of religious architecture is the Matthias Church, built in the 14th century! Most interestingly, during the Turkish occupation of Hungary in the 16th century, the church was spared and converted into Buda's main mosque! It's obviously returned to its original status as a Christian holy place, however. 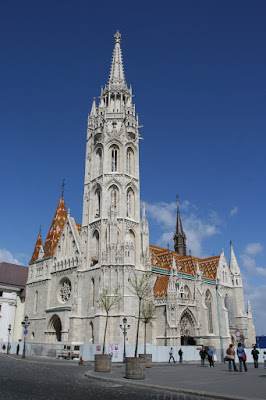 The city is actually split into two, very distinct parts by the Danube river. On the hilly Buda side are the castle complex, with the Matthias Church and Fisherman's Point, Gellert Hill, and some upscale neighborhoods, while on the flat Pest side is Parliament, plenty of shopping (including the great market halls) and restaurants, and some sprawling districts and suburbs. We stayed on the Pest side and spent most of our time there. 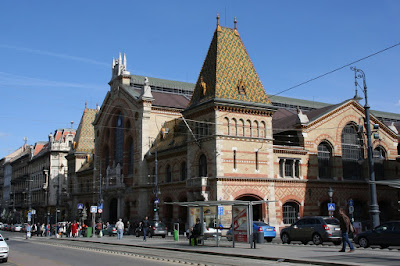 Literally our first stop in Budapest: one of the Great Market Halls. This place was everything a market lover can ask for. Delicious food stands, fresh produce, butchers shops, delicatessens, and local handicrafts, all under the same (big) roof! 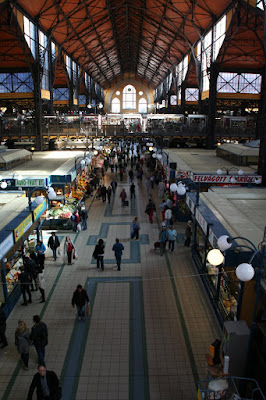 The hall itself is quite lovely. Built a couple hundred years ago to bring the growing market scene all into the same building. 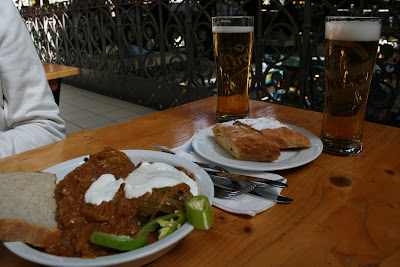 Did I mention delicious food at the market? Missy and I had these amazing cabbage rolls with sour cream and peppers, local beer, and these delectable apple filled pastries. Amazing lunch, and we were sitting up on the second floor with a nice birds-eye view down on the hustle and bustle of the market! 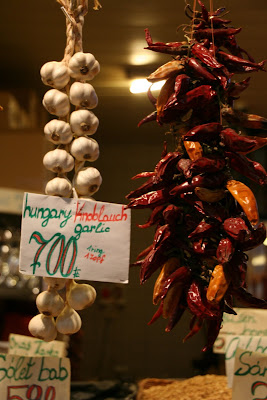 Garlic and dried peppers. From these little peppers comes a major staple of Hungarian cuisine: paprika...Hungary is famous for the ground pepper spice. Its everywhere and in everything too. 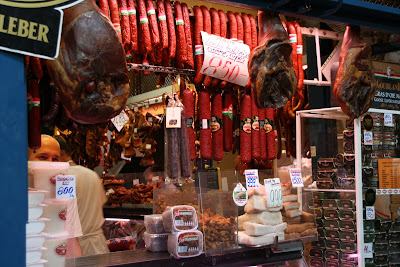 They are very big on salamis, pepperonis, and other cured meats, which I loved! We found out that Hungary is a very popular destination for Italian tourists. Now that I've been there, I understand why, given the foreign feel (Hungarian is quite a unique language and TOTALLY different from any Latin-based or Germanic or Slavic ones!) but delicious food and wine. 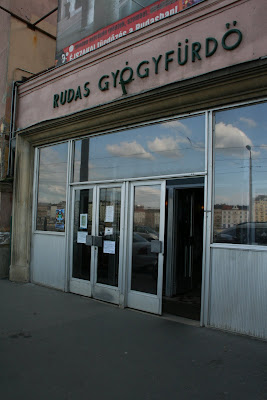 The Rudas Baths. Hungary is famous for its spas, a leftover from the Ottoman period, when Hungary was under Turkish rule. Unfortunately, I couldn't take any pictures inside, but if you ever go to Budapest (or elsewhere in Hungary), you MUST go to one of the historic Turkish-style baths. The main baths building is very old...hundreds of years. You walk into the main bathing hall and its like stepping into another time. Imagine an old stone-walled and cavernous room with 5 pools, all at different temperatures; it is domed with these colored glass tubes providing the main light, which comes through in colorful beams. It's an incredible experience! Very peaceful and relaxing. There are also side rooms for showers and massages. We went on an open day, when both sexes are allowed to bathe simultaneously, but normally they only allow either men or women during specific bathing hours. So, be careful to look up the times before you go as most of the baths are operated this way. 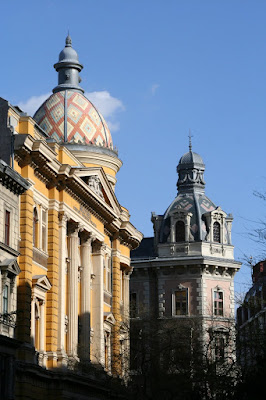 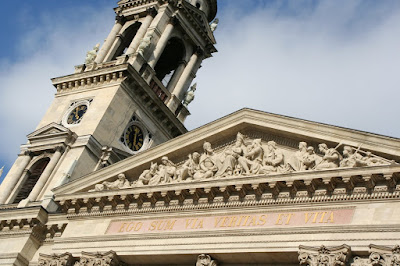 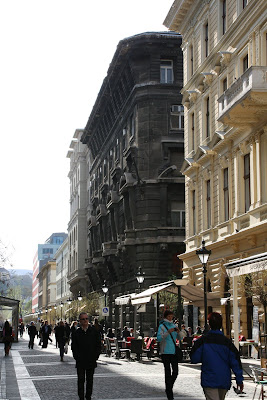 One of several pedestrian-only shopping streets. There are a few of these; they are quite a bit over-the-top touristy though... 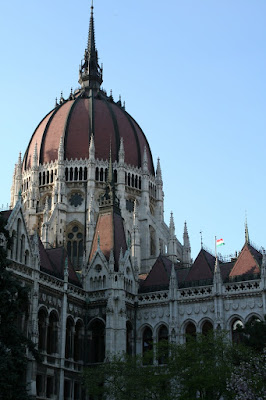 Hungary's beautiful Parliament Building. This place is right along the Danube, across the river from Buda Castle. 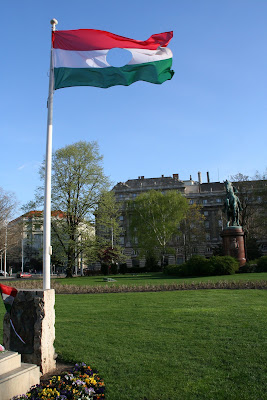 A monument outside of Parliament...testament to how strongly opposed Hungary was to Communist occupation by the Soviet Union. This is the plaque describing the flag seen above. 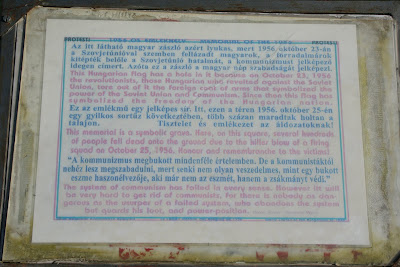 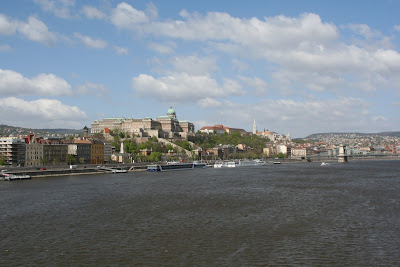 Looking across the Danube to Buda, the most prominent features on the skyline are the various buildings around Buda Castle on Castle Hill. 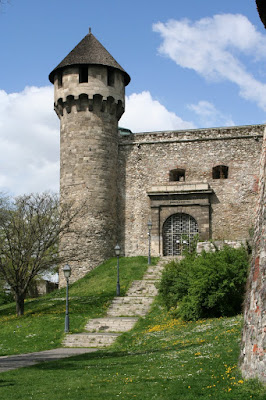 Heading up the hill to the castle complex. 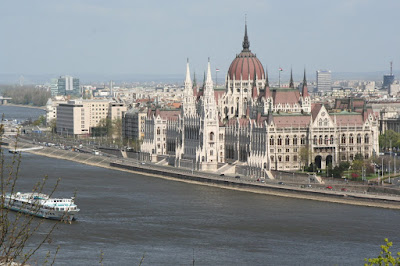 Did I mention this Parliament building is beautiful? It's huge too! Also, one of the river cruisers is seen here. Cruising the Danube is apparently VERY popular. I guess it makes sense since the river winds its way through much of Eastern Europe, with plenty of beautiful old world cities and towns lining it's shores. Starting in Germany, it dumps out into the Black Sea, also not a bad place to visit I'm told. A Danube river cruise would probably be a great trip for an older retired couple (in my personal opinion). 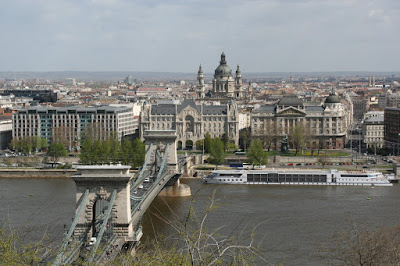 Looking across the Danube towards Pest. You can see the difference immediately between the two sides: Buda is hilly, Pest is flat. Much of Hungary consists of a broad flat plane, which makes it ideal for agriculture. It also made it relatively easy to invade, unfortunately for Hungarians historically. Though I think their long history of invasions has brought them together and strengthened their Magyar identity! 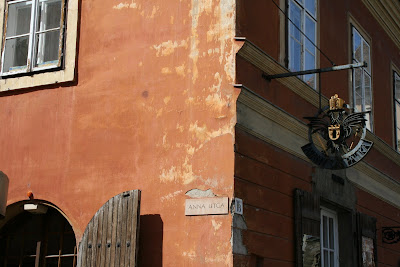 Wandering the old city around Buda Castle... very well preserved and well worth a wander. 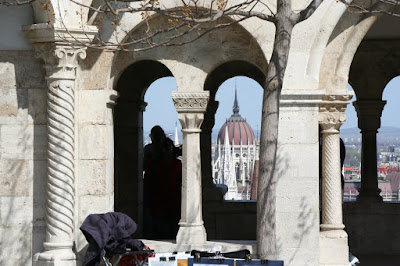 Parliament through the battlements at Fisherman's Point. This is a popular tourist stop, for good reason. The white stone and statue of King Stephen (see below), the first King of Hungary, are reason in themselves; add in the adjacent lot to Matthias Church and the phenomenal views out over the river and Pest, and you've got yourself a winner. 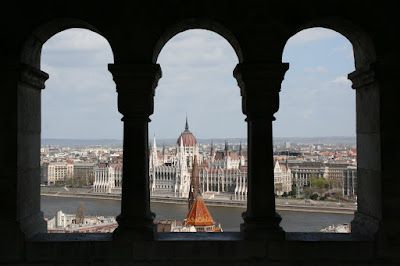 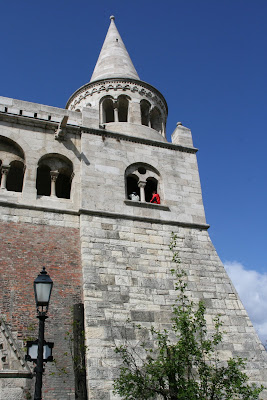 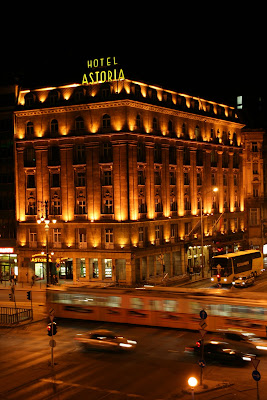 This was the view out our hostel window...not bad. Apparently, the Hotel Astoria was used as Nazi Headquarters during the occupation in WWII. 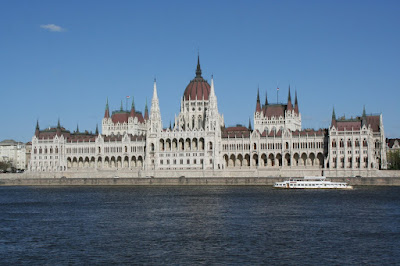 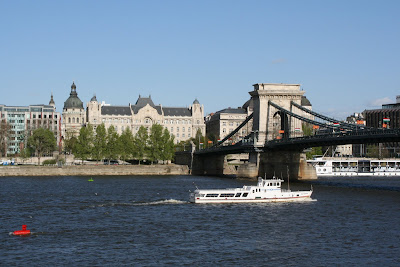 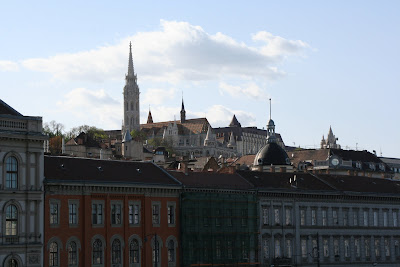 Budapest: beautiful city and recommended...highlights were definitely the food (cabbage rolls, goulash, dumplings...) and wine (and wine cellars), the Great Market Hall, and the baths. People were great as well...they particularly appreciated that Missy and I learned a little bit about the alphabet (so we could pronounce words at least half right) and some basic words and phrases in Hungarian...it's amazing how far those little things go when visiting somewhere.
Posted by Drew at 8:00 PM

Hey Drew! I just discovered your blog, and I absolutely love it--you seem to have mastered the art of both description and of knowing when to let your pictures stand for themselves. Wonderful work!

Thanks! I'm glad you are enjoying it!

Great post with amazing trip places for tourists that really attract international tourists to visit them at least once.
Heathrow airport cheap parking