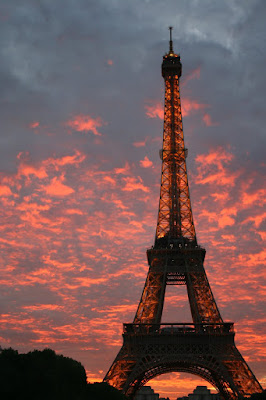 Paris: I was here in July for 10 days to attend the ISSS9 conference. I really liked this city a lot more than I was expecting! It's beautiful, and despite their reputation, the people are just fine. 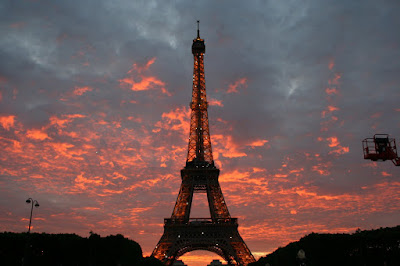 We were treated to this incredible sunset the night we (a few of the guys from the conference and myself) decided to go hang out at the Parc du Champ du Mars. Needless to say, we had a great view. The random lights on there were sparkling for a little while the glorious sunset painted the clouds. 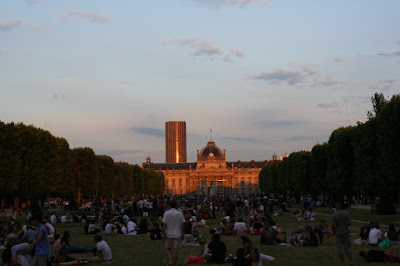 Looking behind us at the park. This is one of the things I loved about France: the people really know how to relax and enjoy life. I loved it! They get together with their friends and just hang out and have a good time...most often in incredibly beautiful places! 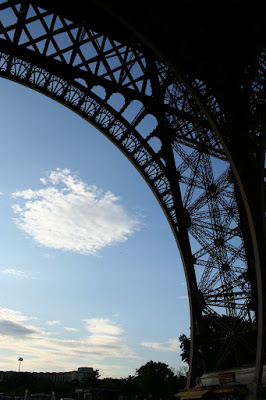 Attention to detail....the Eiffel Tower is huge, an intricate tower of trusses. But they even made the steel-work fancy...impressive. 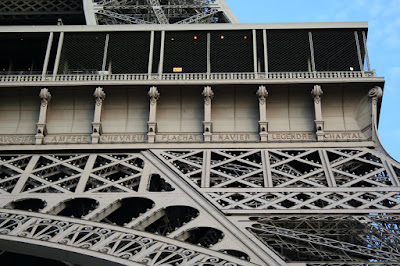 The tower is also graced with the names of some of France's most famous individuals...including many a physicist and mathematician! 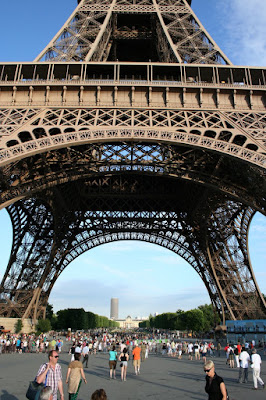 It's quite a bit bigger than I was expecting really...and quite phallic too. One of our French friends kindly pointed that out to us. 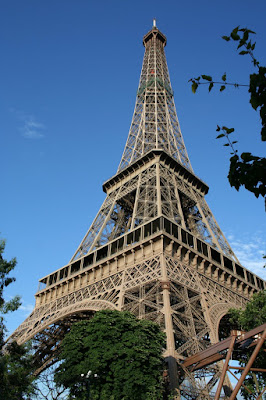 Like the Parliament Building Tower in London....I couldn't take enough pictures of this iconic structure. 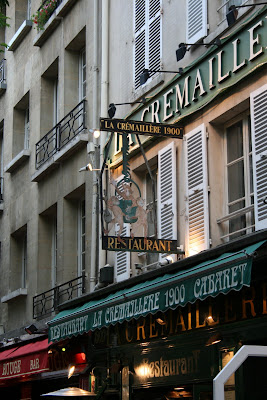 And moving on...cafes, bistros, and restaurants. Of course Paris has some amazing food. Our French friend Hugo took us to a little place for a traditional French meal, which was delicious. I was also a big fan of the Southeast Asian and African influences. I had Togoan cuisine for the first time in my life...and it too was delicious! People watching here is incredible too, but I preferred to be wandering while doing so...some of the cafes (which all have tables outside on the sidewalk) in the more people-scenic (or scenic-people?) areas were packed...I'm sure you probably had to sacrifice a small animal or profess your home country's inferiority to France in order to get a seat. 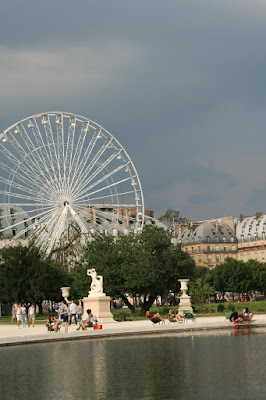 More relaxing in beautiful places...seriously, I love the French. This is in the Jardin des Tuileries, which used to be a palace facing the Louvre. It was destroyed during the Paris Commune in 1871 however. Now it is a very pleasant garden/park with lots and lots of monuments and statues. 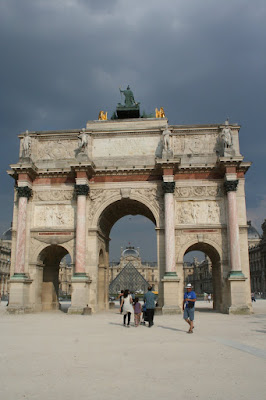 One of the off-axis arch's...looking through to the Louvre, another old palace that is now the most famous museum in the world. 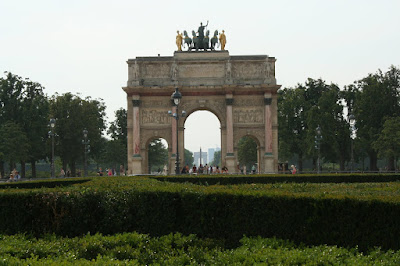 This is the same arch (Arc du triomphe du Carrousel), but now we are looking through the other way. The Louvre and this arch line up along the Jardin des Tuileries and further down along the Champs-Elysee. Here you can see Cleopatra's Obilysk and the Arc du Triomphe (both along the Champs-Elysee) in the distance. As with other history rich places, it was incredible to be wandering around this area. 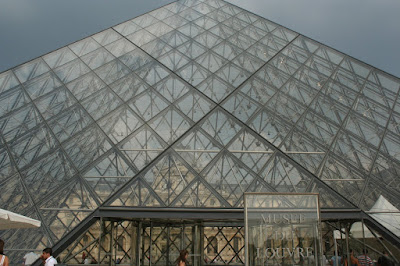 The Louvre. I actually did NOT go inside on this trip....I'm saving it for when I come back in a couple years with Missy. 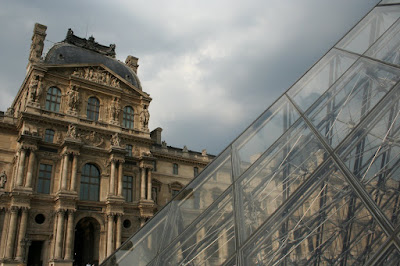 I like the pyramid. I think the blend of old and new is awesome, so long as it's done with taste (as is the case here in my opinion). 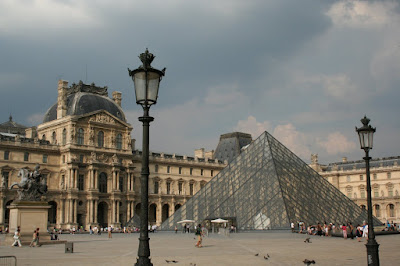 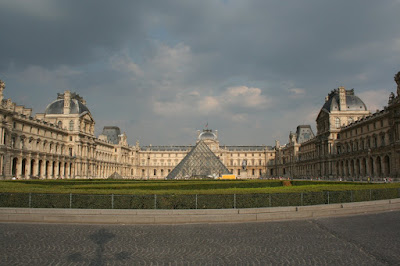 The Louvre is huge. Most people only think it's an art gallery thanks to it's most famous painting, but it is so much more than that....I did go to the Musee d'Orsay, which is also massive, but nowhere near the size of the Louvre. I spent a good 3-4 hours wandering and only saw one floor worth of paintings (which was incredible by the way). I will have to devote at least one full day just for the Louvre. 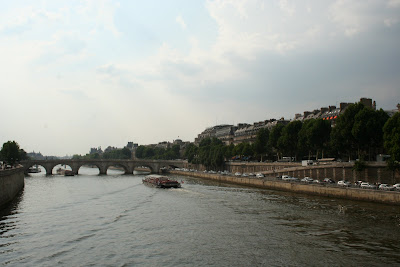 The River Seine. As part of the conference, we got to go on a river cruise on one of those glass ceiling boats (like the one seen here). It was pretty classy enjoying French cuisine while the beautiful city seemingly floats by. 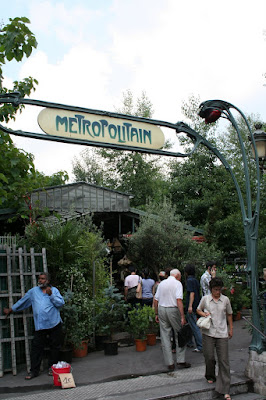 The Metro. Paris' underground network is extensive, with stops so close together that you can sometimes see from one platform to the next underground! It's a great system, but it has a major problem. The vast majority of Paris' public transportation shuts down between midnight and one, which really puts a damper on any good, fun, late nights out on the town if you are staying outside of walking distance from the center. There are night buses, but they only run once an hour and have terribly confusing routes. Oh, and if you want to get a cab, you better speak perfect French WITH a Parisian accent or you can just forget about this service. Seriously, one of our French friends (not from Paris) had to haggle with a Parisian cabbie for a good 10 minutes or so to convince him NOT to rip us off and that he could indeed drive us to where we needed to go. Crazy...I just wish the Metro ran late. 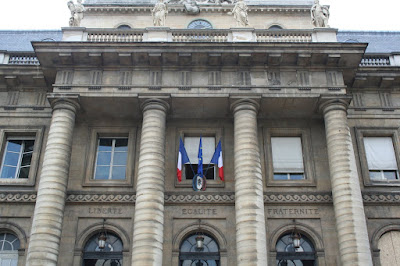 Liberte. Egalite. Fraternite (put accents on all the e's except the one in the middle of Fraternite-->fraternit-ay). Anyway, this translates to "Liberty. Equality. Fraternity." if you don't speak French and couldn't already figure that out. This is the national motto of the Republic of France. This motto graces the Palais de justice de (Palace of Justice of) Paris on the Ile de la Cite. The Ile de la Cite is one of the oldest parts of the city. It is a small island on the river and is home to some beautiful old buildings, including Notre Dame. 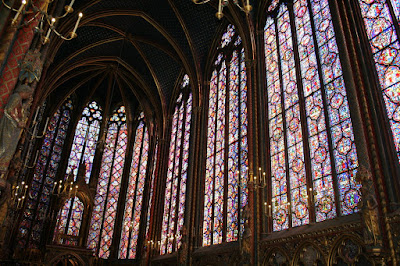 It is also home to Sainte Chapelle, with its walls, yes...walls, of stained glass. If you are ever in Paris, you must go see this from inside. It is incredibly beautiful. 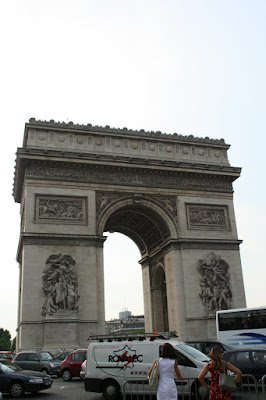 L'Arc du Triomphe and traffic in the cirque. There is always traffic in the cirque. It was still incredible to see this arch though....the details on it are incredible, and every time I see it, I think of those old WWII videos of Hitler and his Nazi army marching down the Champs-Elysee and through this very arch. I have heard, and have no idea if this is true, that Hitler originally planned to destroy the arch when he first conquered France. However, somewhere along the way, he changed his mind, and instead, he decided to build a much, much larger one in Berlin upon his utter victory in the war. Fortunately for the world, Hitler lost and the Arc du Triomphe still stands. 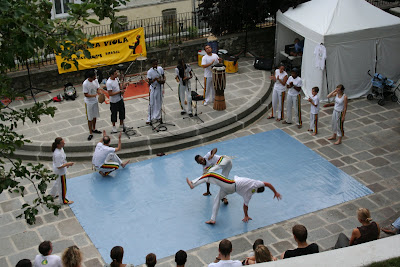 A capoeira demonstration near Montmartre. 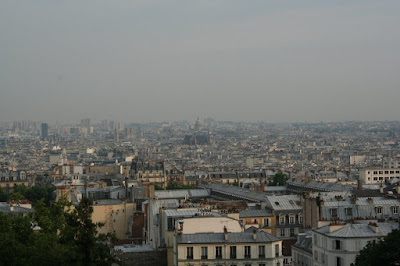 View of the city center from Montmartre and the park at the base of the Basilique du Sacre Coeur (Basilica seen below...the park is another popular spot to bring some wine, cheese, and bread and enjoy a good sunset with friends). Paris was immensely more of an all-around beautiful city than I was expecting, and it is massive. It would take several lifetimes to uncover even half of it's secret places. I really enjoyed it here. I spent a lot of time wandering at night too, but I didn't take many pictures. There are countless little neighborhoods, each with their own feel...everything from the tres chic Champs Elysee to the flashy neon and working ladies of Pigalle, the red-light district (and home to the Moulin Rouge) to the notorious suburbs (we stayed in the suburbs, and yes, there are some hooligans...be wary walking around at night, but for the most part they are just teenagers looking to hang out and get drunk with their friends...and just remember: Je ne fume pas. Je n'ai pas une cigarette.) . The pictures here do nothing...absolutely nothing for a taste of the city. To see Paris is to wander aimlessly in it's labyrinth of streets and stumble from beautiful sight to sight, whether it be an incredible work of architecture, a quaint little winding street lined with restaurants, cafes, and artists' studios, or a vast green garden. Paris is an incredible city, and I look forward to coming back. 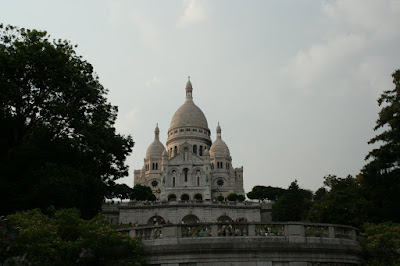 Paris is one of my favourite cities and I'm already planning to fly to Paris for my next holiday trip.
airport parking heathrow