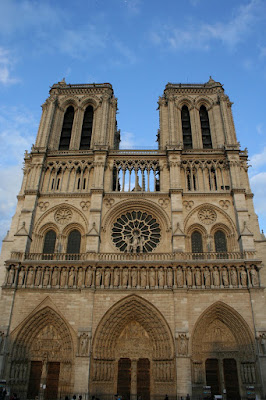 Notre Dame de Paris Cathedral, quite literally the heart of Paris and France too. It's not the biggest cathedral in the world. It doesn't have the highest towers or the largest crypt, and it surely doesn't dominate it's city's skyline. However, this is one of the originals. A marvel of architecture, and it is graced with details that just get better and better and better as you get closer to this ancient place of worship. 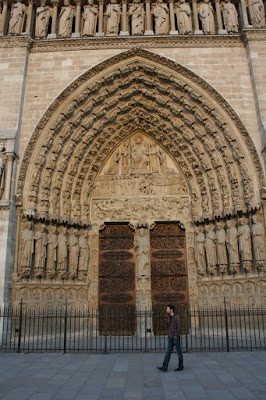 Construction started on this cathedral in 1163...yes...that's right it's going to be coming up on its 9th centennial in only a few decades. People, just like this guy here, have been walking by these doors for over 800 years. THAT is mind-bending for someone from North America! Even more amazing, this building doesn't stand in ruins; it's been renovated and repaired and is still a functioning cathedral. Paris, and France are proud of this building, and they should be. 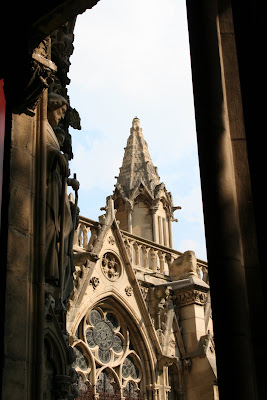 Notre Dame IS Gothic architecture. Many of the techniques and designs used for this building were imitated throughout Europe's many, many other (newer) cathedrals. Architects hired to design and build a cathedral would travel to Paris from throughout France and neighboring countries to study this incredible feat of architecture and engineering. 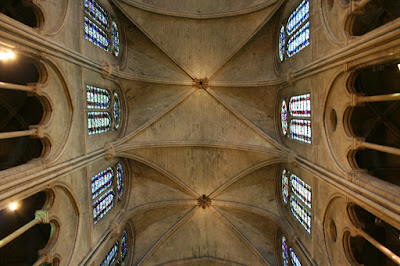 The vaulted ceilings are high, thanks to the flying buttresses on the outside of the structure. It's amazing and utterly terrifying that those stones, weighing I have no idea how many tons, hold each other in place, distributing their collective mass down into the load-bearing columns. As an engineer looking at this, and even better, standing underneath them, I was simply in awe. 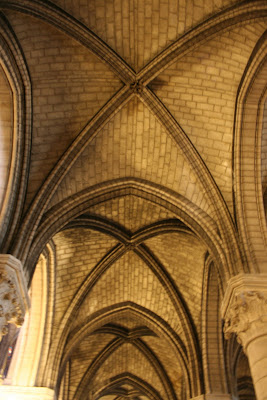 More vaulted ceilings in a side-passage of the main hall. 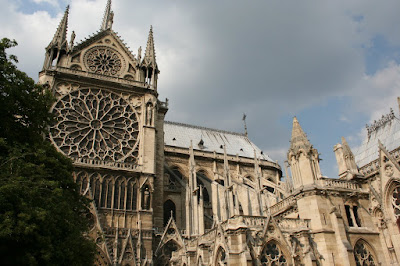 One of the massive round stained-glass windows and the famous flying buttresses (the arching stone beams connected to the main walls along the portion of the structure in the middle of this picture). Notre Dame was one of the first buildings to use these additional support structures, which allowed them to build higher walls than what was thought possible at the time. 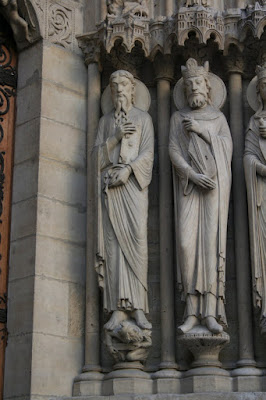 Notre Dame's facade is intricate. One of the many, many small details: I'd love to know who this guy is, and why he is standing on a person instead of a pedestal. I'm betting he was not a nice guy. 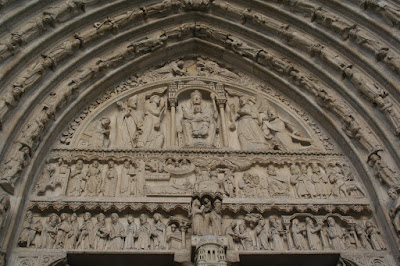 Above the central doors...this is huge by the way. 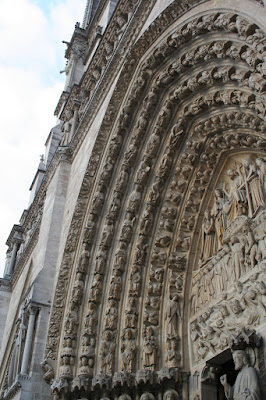 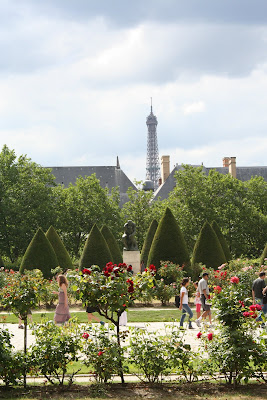 At the Musee Rodin. The Thinker sculpture, which is world famous, is found here along (center in this picture) with many, many other works by Auguste Rodin. 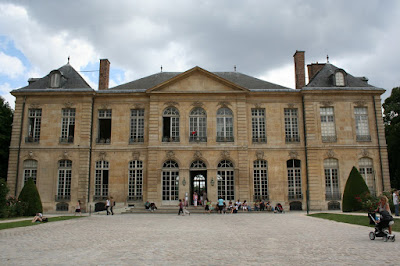 The Musee Rodin consists of the old Hotel Biron and the surrounding grounds (which are now a beautiful garden populated with Rodin's works). The Hotel Biron was one of Rodin's favorite haunts...he even lived here for a time. When he died, he donated his works to the Republic of France under the condition that they turned the Hotel into a museum for the art. 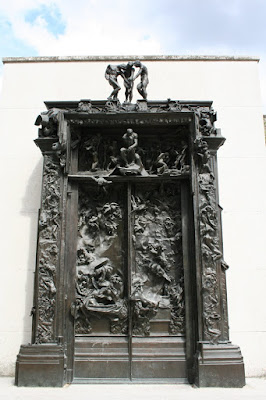 La Porte de l'Enfer: The Gates of Hell. This was by far my favorite sculpture at the museum. Rodin died before completing this masterpiece, yet it looks incredible, with its maze of details and horde of figures. It's massive too, standing at nearly 20 feet high and more than 13 feet wide! 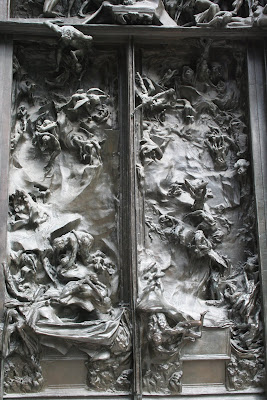 The inspiration for the work was Dante's Inferno, the first part of the Divine Comedy. You find yourself mesmerized by the details and the damned figures, who appear to be writhing and tempting from the fluid-like backdrop. 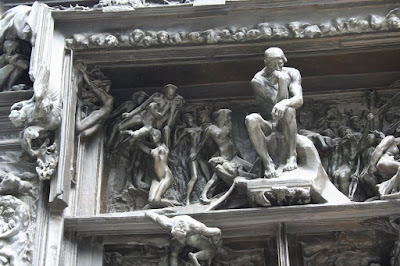 The Thinker makes a key appearance at the top center of the Gates. He is surrounded by naked female figures, who are engaged in a series of erotic and provocative poses, yet he seems too deep in thought to worry about that. Could this Thinker represent Satan, contemplating his eternal predicament? Or perhaps it is the lost soul focusing on how he ended up damned to Hell. According to Wikipedia, some people think it represents Dante, looking down on his characters...others think it represents Rodin or Adam (biblical Adam...the original man) concentrating on the original sin. Whoever it is, the figure is intriguing considering the chaos and temptation surrounding him. I particularly like the one figure with the skull for a head amidst the naked women. Can you find it in here? 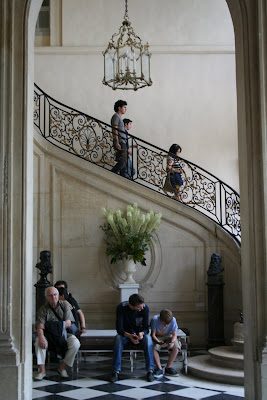 Inside the Musee Rodin. 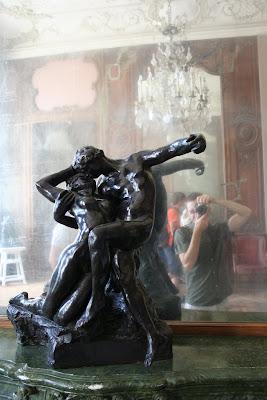 Rodin was a very famous sculptor. It really is true that sex sells. 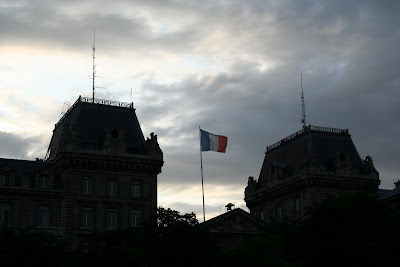 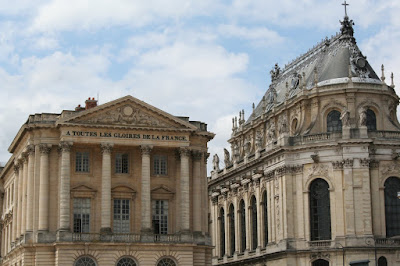 Versailles: the old imperial palace expanded to its present form under Louis the XIV, the Sun King. This is only a small part of the complex by the way. This place is huge. It's really no wonder that when the King and court were living in palaces like this (and the Louvre in Paris), the normal people revolted so fiercely. "A TOUTES LES GLOIRES DE LA FRANCE" seen in this picture translates to: "To all the glory of France". I don't think that was really the case though; it was more like: To all the glory of the absolute monarchy, we construct this haven and sanctuary to ignore our people and escape from reality. 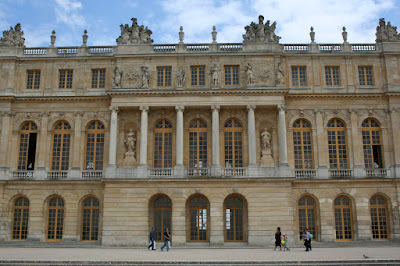 Fortunately, the revolutionaries did a great job with the monarchs and managed to spare the buildings at Versailles, which is now a suburb of Paris (it was originally chosen for its location in the country, well away from Paris). While there, we only had the chance to tour the grounds, as we were on a tight schedule and there was a long line to see the extravagances inside. I've been told that Versailles takes multiple days worth of visits to fully explore. I barely scratched the surface in the gardens, and I look forward to spending a full day here when I return to France. 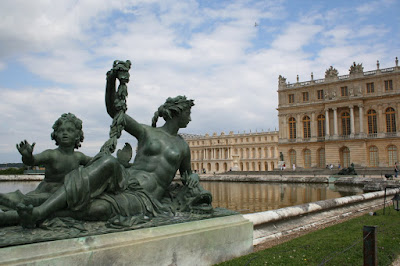 As with anywhere steeped in history, I loved Versailles, even with the hundreds and hundreds of tourists swarming the grounds. Louis the XIV was one of the greatest statesmen to ever live. He was immensely powerful. His court is famous for it's grandeur and intrigue, and this palace was where much of it all went down. 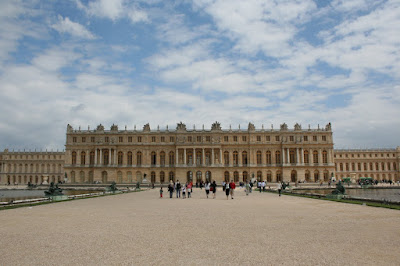 Looking at the backside of the palace. 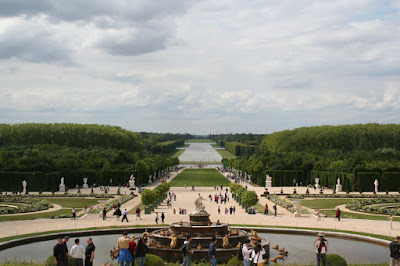 Turn around 180 degrees from the previous picture and this is your new view. Looking out over the gardens. There are hedge mazes, massive greens, countless fountains and statues, hunting grounds, and a man-made lake (seen here in the center background). 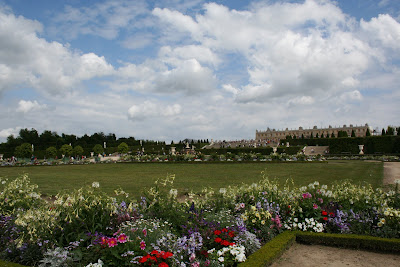 Being July, the gardens were in full bloom, and the current caretakers have done an excellent job with them. The flowers were all soft pastel pink, rose, purples and off-whites. It had a very dream-like effect to it. It made you feel like you were no longer alive amongst the troubles of the world...instead you have escaped to some uber-pleasant world of soft grass, fragrant flowers, and singing birds. Even with all the other tourists around, it was easy to escape. Just like in the Forbidden City, you only have to go a short distance off the main-axis to find yourself mostly alone! 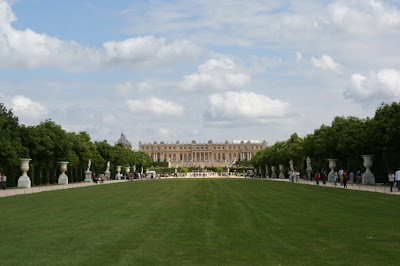 There are really a lot of people in this picture...take that into account to get a sense of how massive this place is. 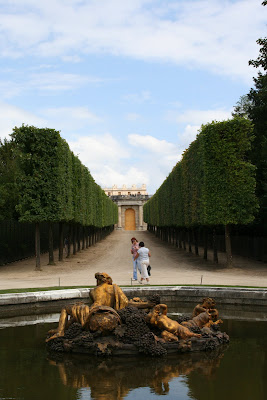 In the hedge maze. This is a legit maze...those "hedges" are mostly small trees; the wall heights have to be around 20 feet or so. 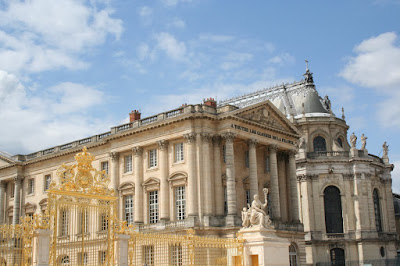 Hm, golden gates. Nothing says "I'm filthy rich and I want the world to know it" like golden gates. Seriously, this royal family got what was coming to them. Let them eat cake? More like let you eat the cold, hard steel of the guillotine.