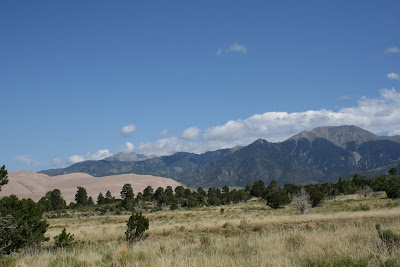 Colorado. I really, really love this state! The following post is about some of the more exciting things we did in Colorado over this past summer. I'll start with the Great Sand Dunes National Park. Yes, Colorado has sand dunes...great ones. See the pictures above and below if you don't believe me. Above you have a 13er (on the right) and a couple 14ers (background on the left) and then some several hundred foot high dunes on the left. Below shows the dunes and the view out over the massive, flat San Luis Valley. 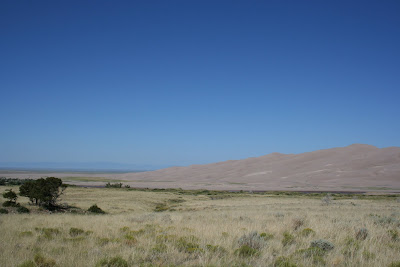 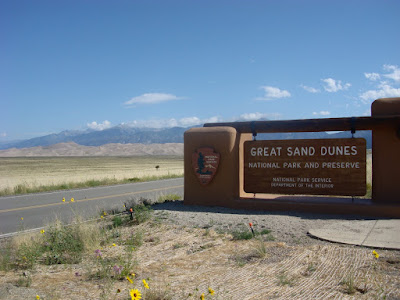 So you might find yourself asking, how did these dunes (the tallest in North America) end up in Colorado, which is not a desert state? The answer is clear when you consider the geography. The huge, flat San Luis Valley (check out the terrain feature on Google maps to get an idea of what I'm talking about) lies between the San Juan mountains to the southwest and the Sangre de Cristo mountains that make a massive spine running north-south to the immediate east (all the mountains seen in these pictures). The prevailing winds blow east and slightly north...so what happens is small particles of sand are picked up in the San Juan's and blow freely across the broad flat valley. The winds, however, don't have enough force to carry the sands up and over the barrier formed by the Sangre de Cristos, so the sands begin to pile up. The dunes have formed in a kink in the Sangre's, which acts as a collection point. Give a few million years of sand pile-up and badda-boom badda-bing, sand dunes. Picture taken by Missy (MLK) 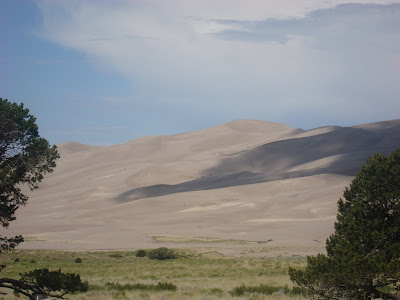 They are a truly incredible sight...they are huge, at hundreds of feet in height and covering thousands of acres. Then you have the mountain backdrop, making for an incredibly dramatic landscape. (MLK) 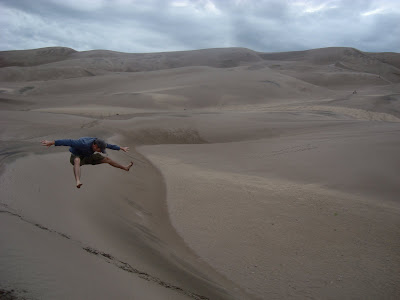 The dunes are fun to play on too...just expect to be finding sand in different places for about the next week or so (or indefinitely in your camping gear). This is me taking a nice spread-eagle leap off the top of one of the steep-sided dunes...I highly recommend this. (MLK) 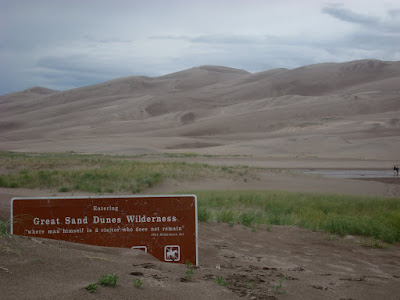 As you can see from this sign...the dunes shift regularly. (MLK) 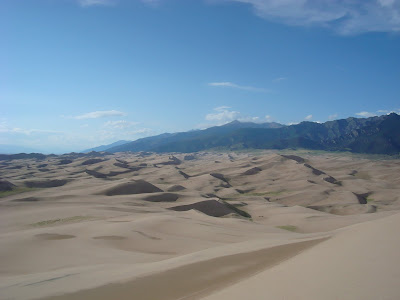 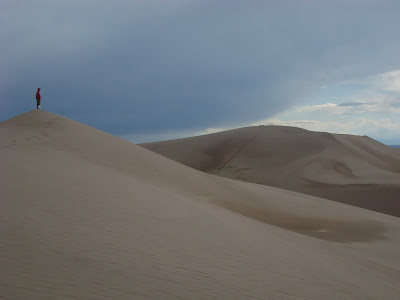 Bailey and I enjoying the view. The others from our group are on top of High Dune in the distance. (MLK) 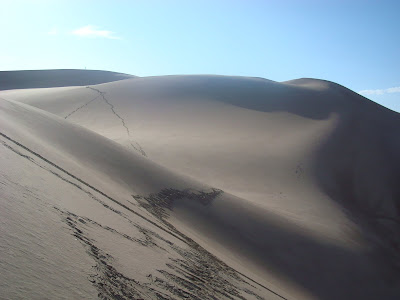 We had an afternoon thunderstorm our first day there, but then the sky cleared beautifully and gave us the most incredible light on the dunes for sunset. Maciej kept saying how we should show people the pictures and tell them we took a trip to Northern Africa. (MLK) 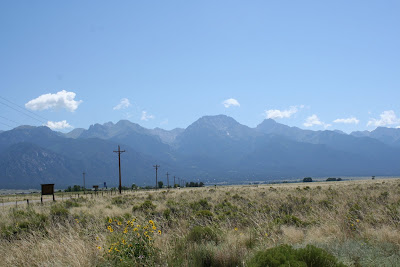 The next day, we drove north in the valley to the small town of Crestone, right at the foot of the mountains. We were using the trail here to access a high-alpine lake and 2 fourteeners. 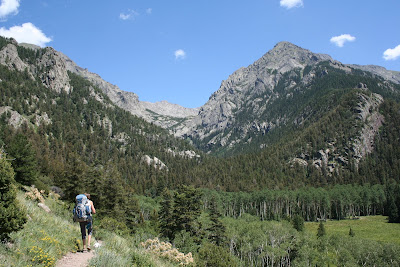 The Willow Creek trail...it's quite steep climbing around 4000 feet in just over 4 miles...and with heavy packs on, that can get exhausting. It is a beautiful hike though. 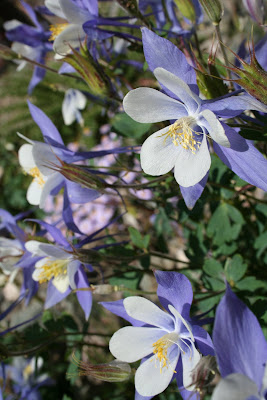 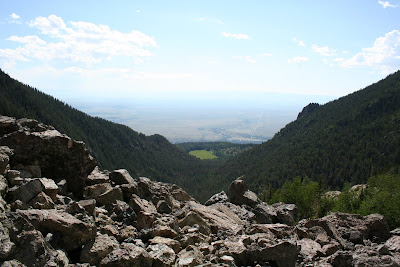 Looking back at where we came from...Crestone is the faint town on the valley floor in the center (above and slight to the right of the big green clearing). As I said...steep hike. 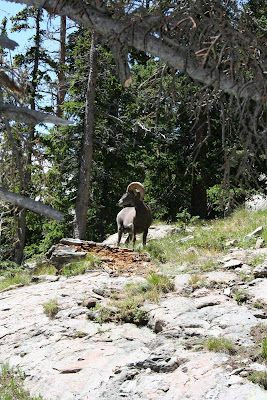 This bighorn sheep hung around us for quite some time. 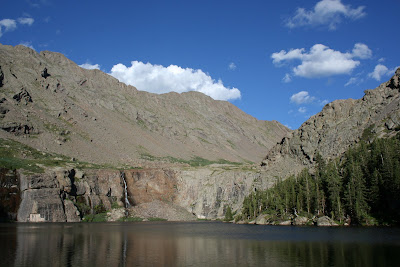 Willow Lake with it's waterfall. This was a spectacular area up here, though it was infested with other backpackers. 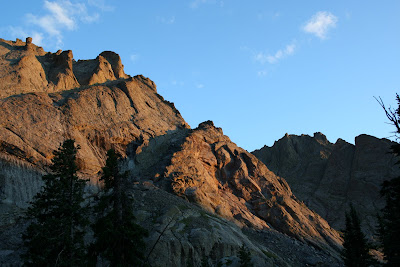 We had another brilliant show for sunset. 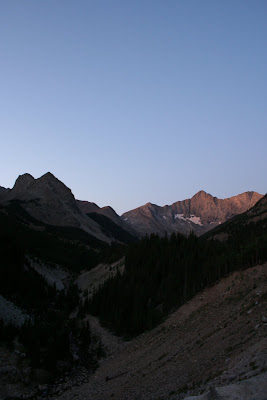 OK, these pictures are now from a different weekend. Having a Sangre de Cristo theme this summer, in large part because I was down in New Mexico, we decided to go climb Mt. Lindsey, a 14er. This is a picture of the valley we used for access and the massive Blanca Peak glowing in the sunrise light. 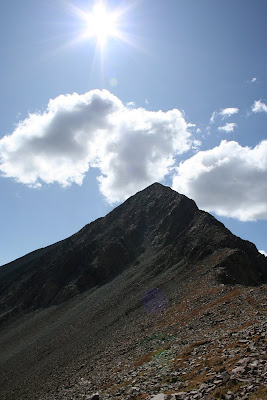 Mt. Lindsey's false summit. Missy and I ended up hanging back at around 13,000 feet. She was happy to have made it that far and didn't want to mess with the intimidating looking Mt. Lindsey. 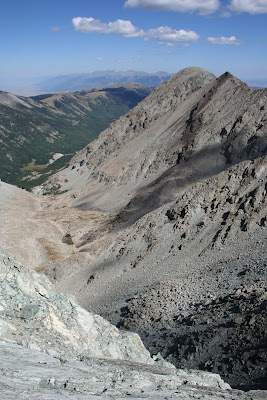 In the distance here you can see the peaks near where we were at Willow Lake: Kit Carson and Challenger Point, as well as the Crestones. This was taken near the top of the Iron Nipple, a 13er near Mt. Lindsey. I took a nice scramble up this mostly because I wanted to say I had climbed the Iron Nipple, which is just a hilarious name! This is some nice exposure though...a tumble here would have landed me about a thousand feet below. 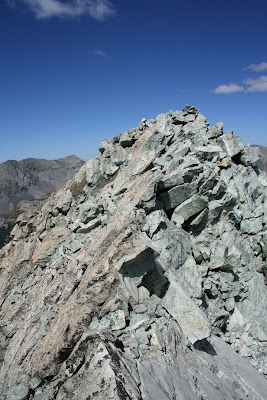 The point of the Iron Nipple summit. 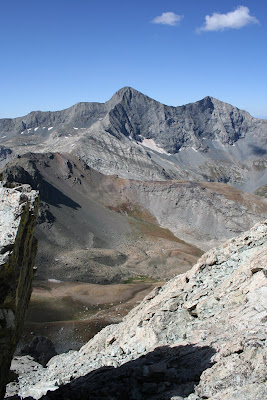 Blanca massif from the Iron Nipple. Blanca is enormous and was a very holy mountain to the Native Americans living in the area. 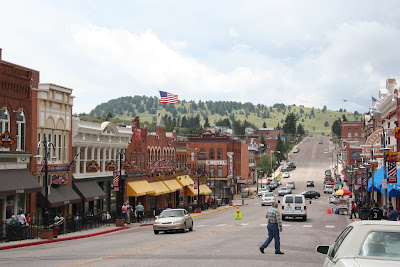 From yet another weekend excursion: main street of Cripple Creek, CO. An old mining town which has now embraced the casino business. It's an interesting place, especially considering it was once going to be the capital of the state (and it is at 8,000 something feet!). 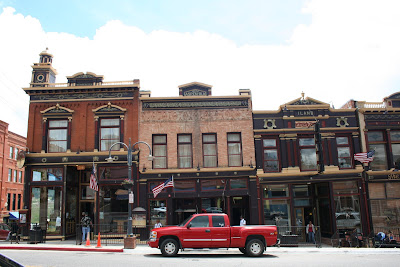 Three of the casinos in Cripple Creek. They have done a great job preserving the old western-expansion era buildings. The town has an awesome feel to it...like you've stumbled into the old west (except for the cars). 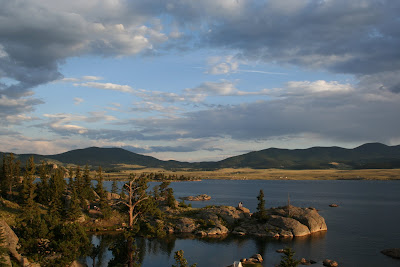 11-Mile Reservoir, revisited. Missy and I love it here, so we decided to come back (the same weekend we went to Cripple Creek). Once again, we lucked out with the lighting at sunset. 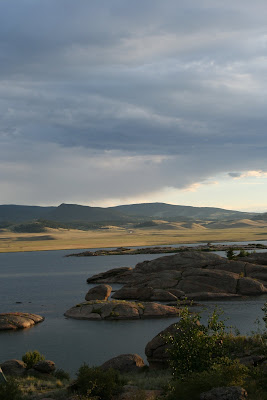 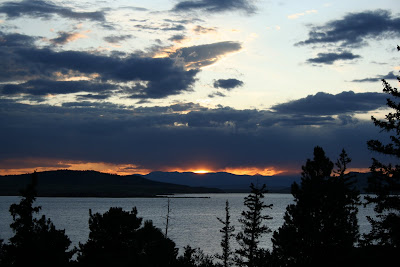 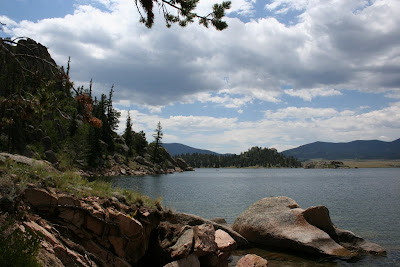 We also took a nice hike around part of the reservoir this time...venturing significantly further than we had before. This area is incredible. 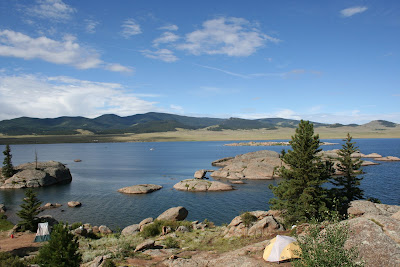 The camping was alright, though we had a pretty nasty storm... 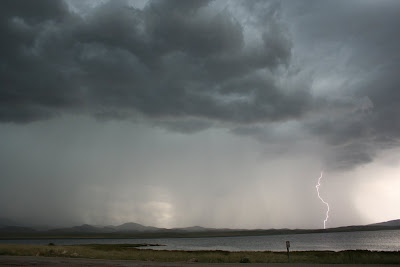 and I managed to snag a shot of lightening, without even messing with the exposure time! After a really terrifying experience with lightening in the mountains earlier in the summer, I dragged Missy and Bailey back to the car for shelter while the storm blew over. From the safety of the car, we were treated to an incredible show! I figure that the closest strike was within about a quarter mile or so...pretty incredible showing of nature's power!
Posted by Drew at 6:08 PM