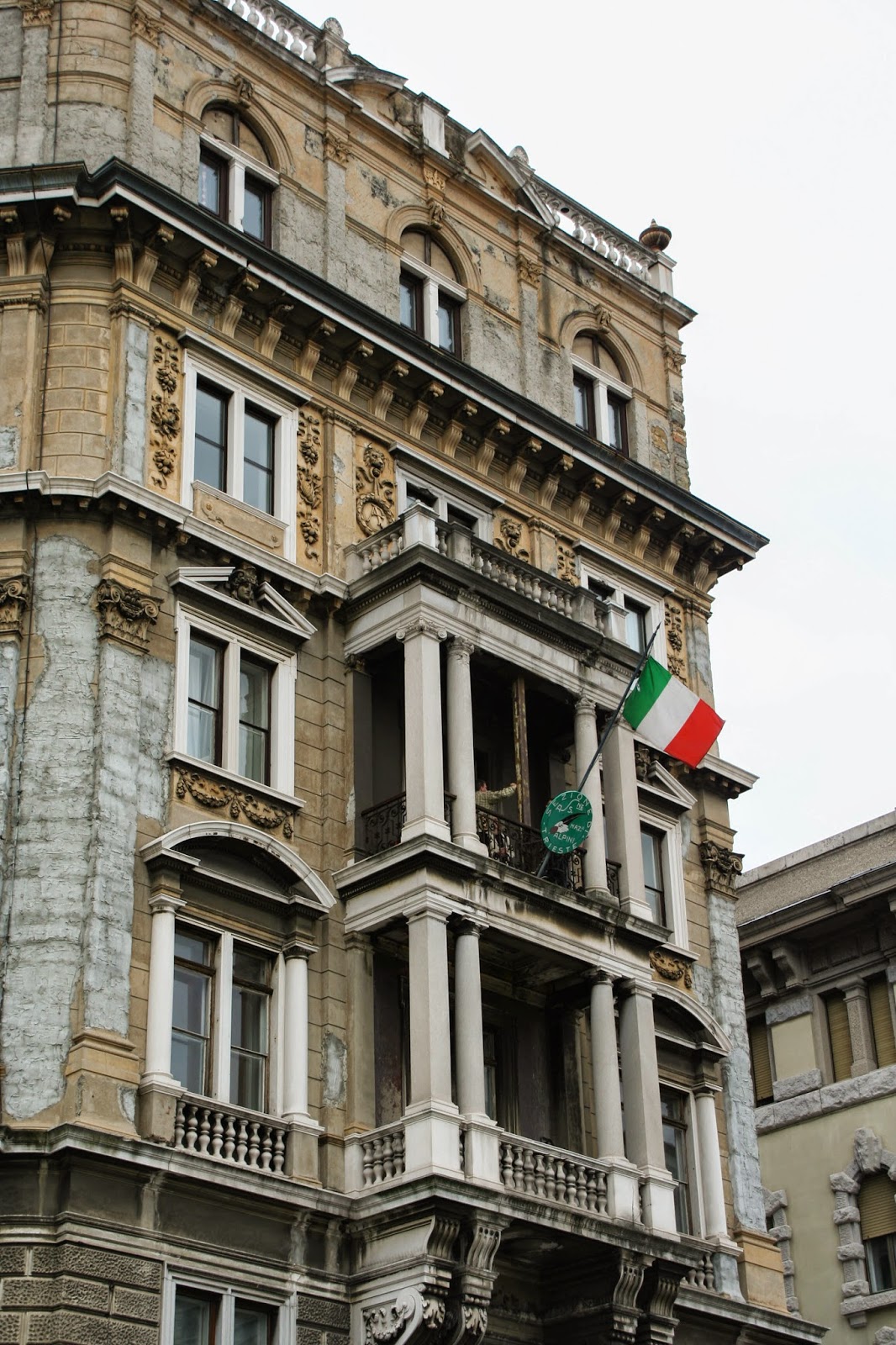 On a great mini-road trip through Slovenia from Austria, two good friends and I took the opportunity to spend an afternoon in Trieste, Italy, which is only 20 minutes or so from the Slovenian border.  According to a guide book I read, Trieste is considered an ugly Italian city... well, if that is true, then I really need to see a pretty one.  This was my first taste of Italy, and it was only a very, very small taste.  However, it was a true amuse-bouche that did its job and left me wanting so much more.  The trip involved a wander around the city center, which was quite different from every other European city I've been in, and one of the best meals I've ever eaten, which was even more beautiful for its shear simplicity.  Like Italy itself, true Italian food left me wanting to return (to eat) too. 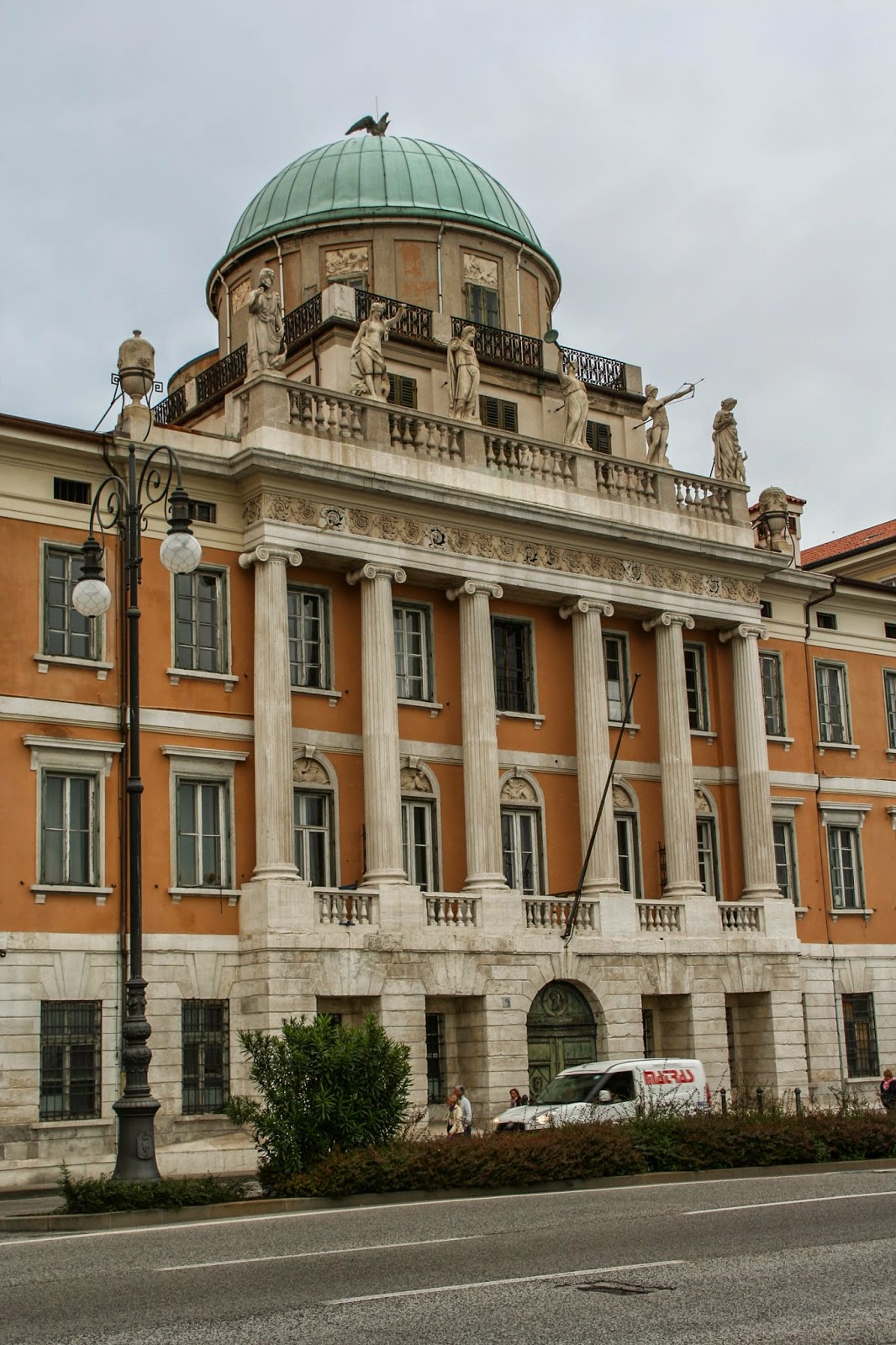 I often forget that Italy is one of the wealthiest nations in the world.  Trieste's architecture reflects that, as well as its imperial history.  Take this building for example: it is grandiose with Romanesque features, right down to the statues from the Roman pantheon at the top of the columned facade.  Even the lampposts were fancy. 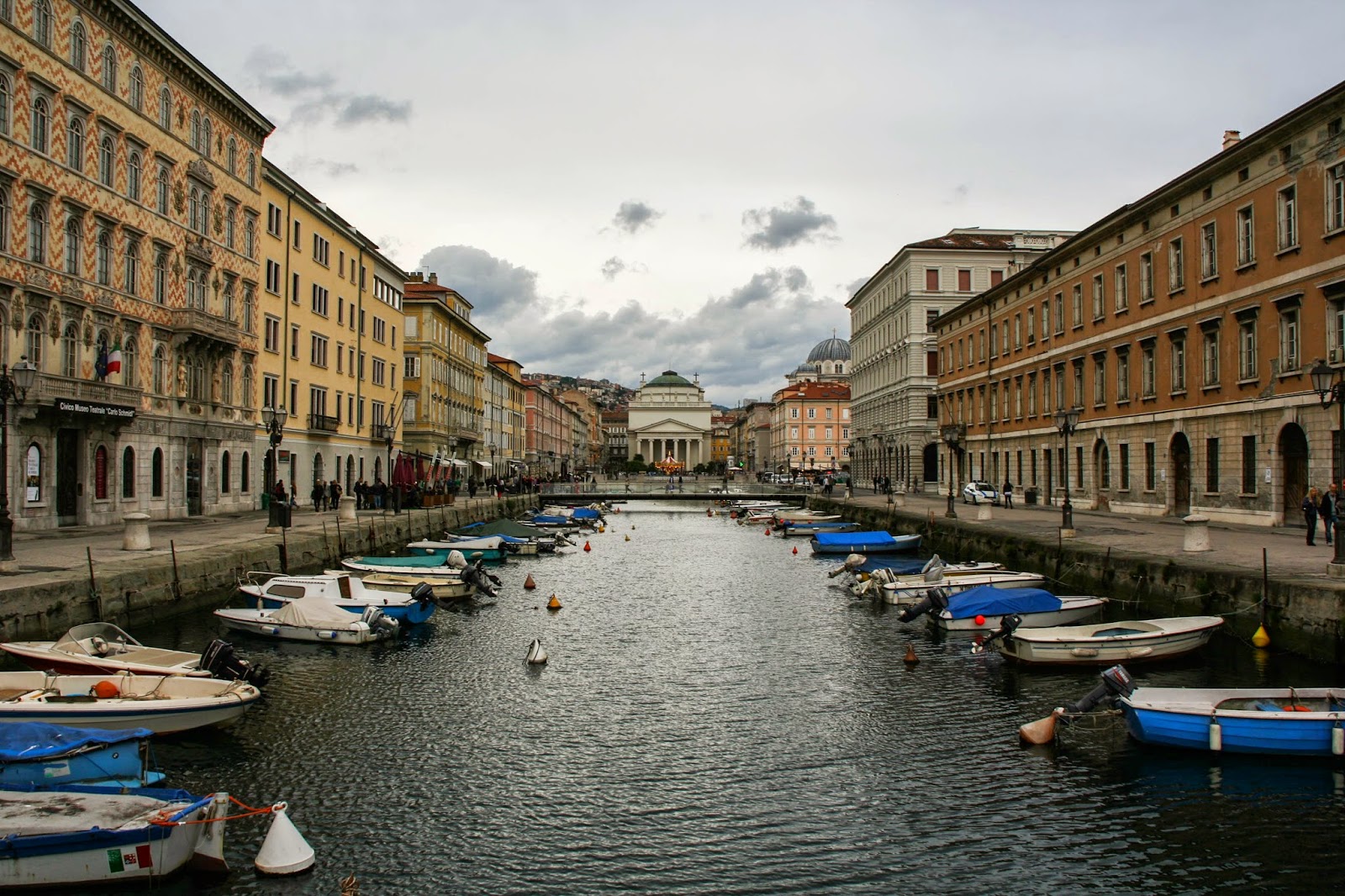 Trieste is a port city, and it has served as such since the times of the Roman Empire.  During the era of the Habsburg Empire, Trieste was the main Austro-Hungarian port and grew to be one of the largest cities in the empire.  Since Trieste was a major trading city between great powers and city-states from Italy, Central Europe, Eastern Europe, and the Middle East, it bears distinct influences from many of those places. 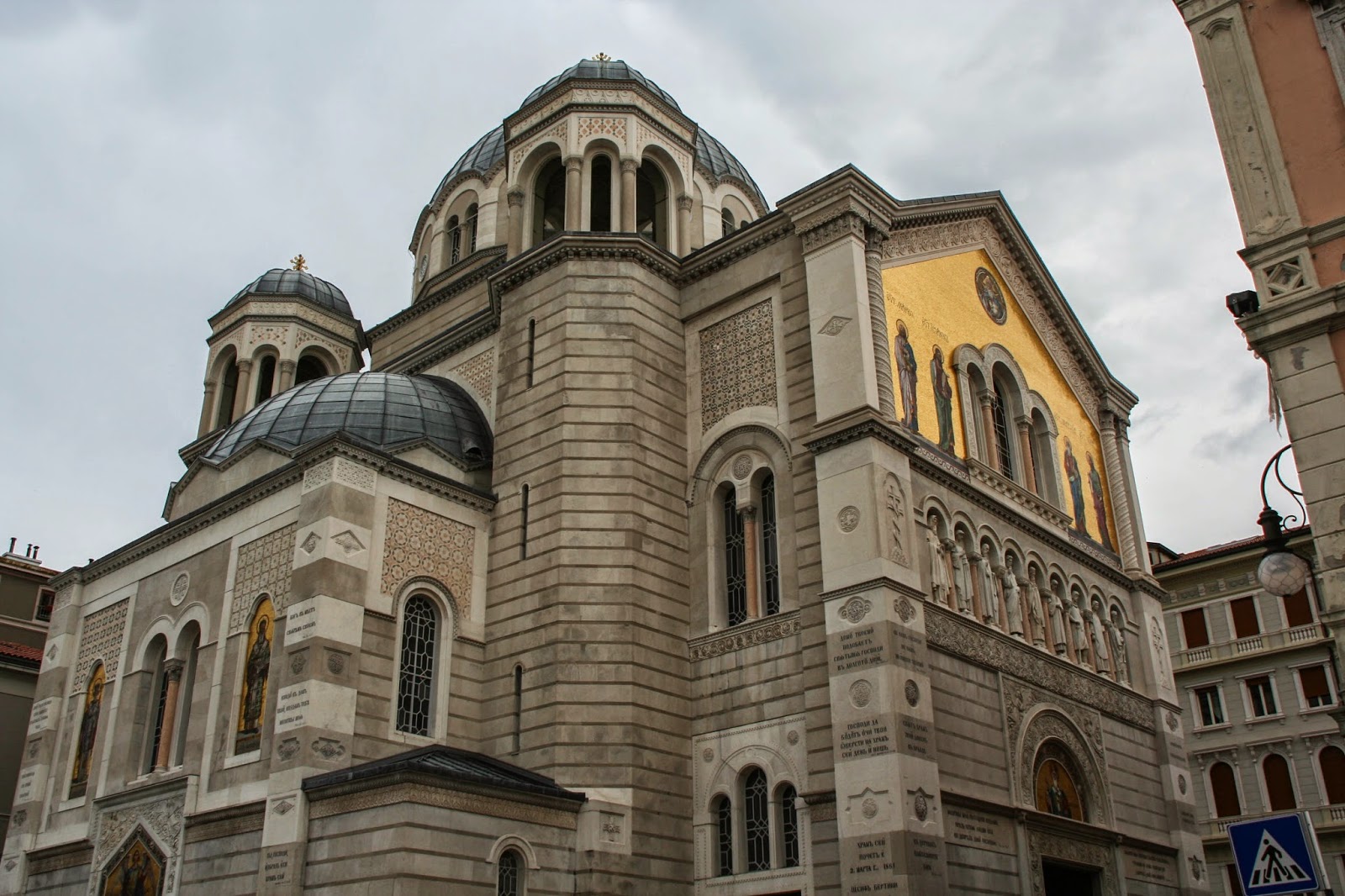 I was shocked by the density of fine and monumental architecture around Trieste.  Though, a lot of it did seem like it was lost in time and somewhat out of place in what is now the modern, industrial, Italian city.  I'm not complaining about that though; it was actually really neat and completely unexpected. Like I said, we were only there for an afternoon, so this is going to be an architecture heavy post, as I was busy snapping away while wandering around and popping into the odd cafe or market.  The domes on this church reminded me a lot of those on the Blue Mosque in Istanbul.  This is an example of Serbian Orthodox churches, which often incorporate such domes into their designs, and the resemblance to Turkish domes is thanks to the influence of the Byzantine Empire, which ruled from Constantinople, a.k.a. ancient Istanbul.  Trieste was part of the Byzantine Empire during the Dark Ages and still bears some evidence from that period. 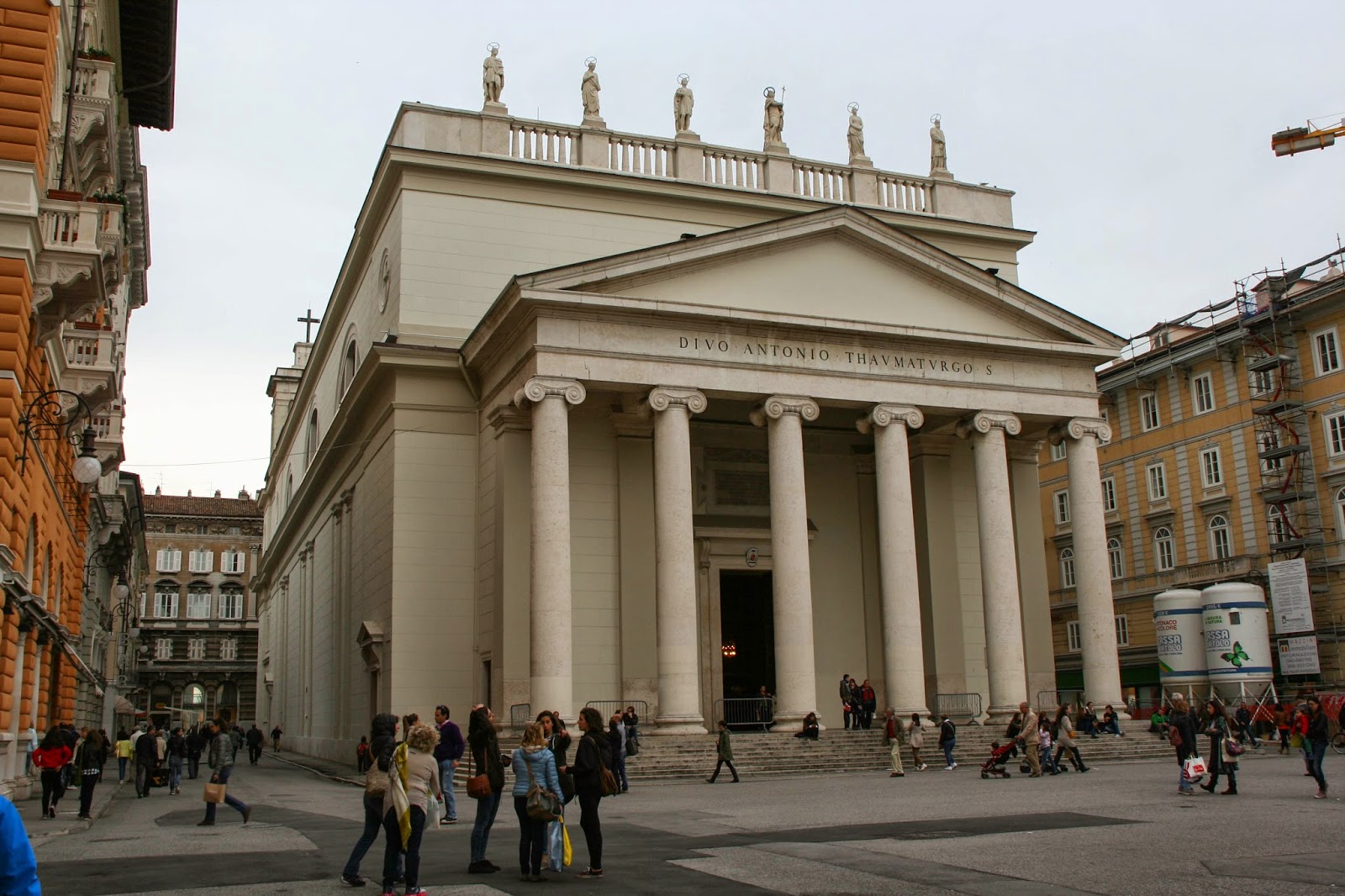 And stepping back even further in time, here is a church with very classic Roman-style architecture.  Note the Latin inscription across the top too.  This relates to one of the first and most bizarre (to me) things I noticed about Trieste: the streets are in a grid.  Having traveled pretty extensively in Europe now, I'm quite used to cities laid out in seemingly random, maze-like and quite organic forms.  However, many Italian cities are quite different... they are laid out on orthogonal grids, thanks to the order of the Roman Empire.  This was unlike anything I've encountered in old European cities so far in my travels. Roman architecture was all over the place too. 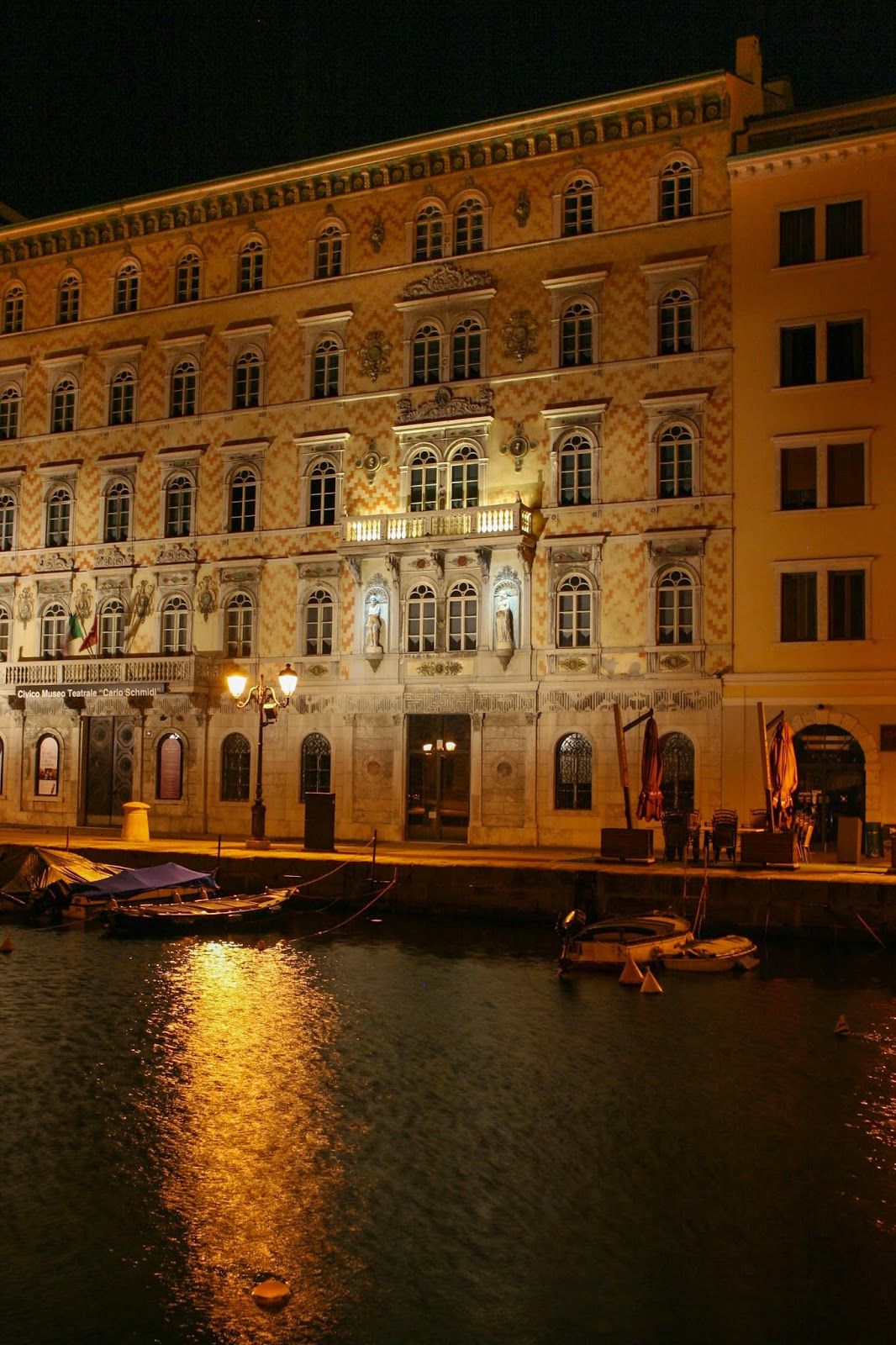 This building along the Canal Grande is a great example of Venetian architecture, which also featured prominently around town.  Combined with the canal, this shot might be right out of Venice. 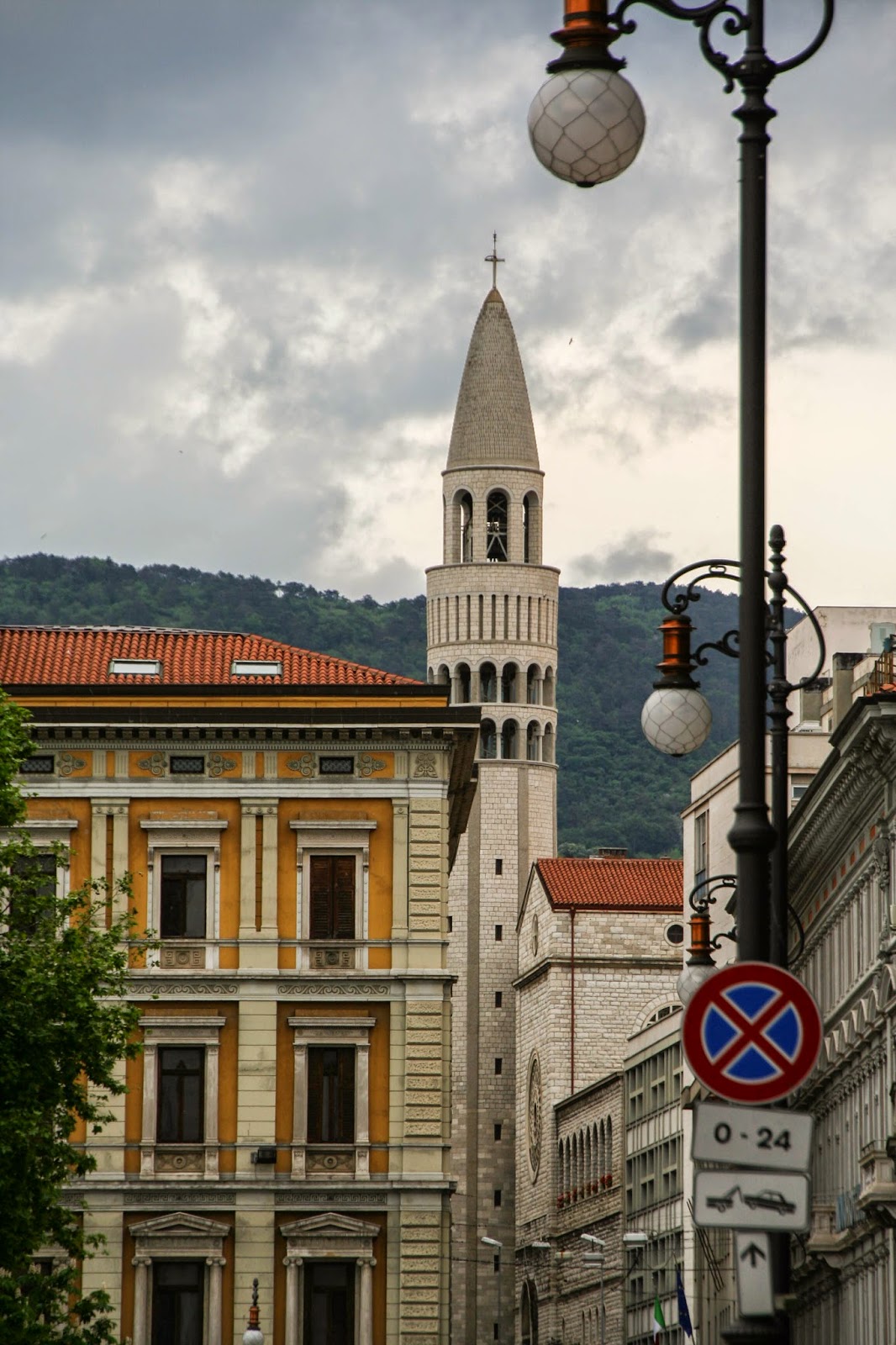 Then there was this church, featuring architecture of the neighboring Karst region in Slovenia.  As I'll discuss in more detail in my Slovenian posts, this architectural style uses near-perfectly cut stone blocks without mortar, or dry-stone architecture.  Limestone from the local Karst region is used, lending that ghostly pale gray color to the structures.  The stone steeple, shaped like a bishops hat, and red-tiled roof are also touches that are very familiar in neighboring Slovenia. 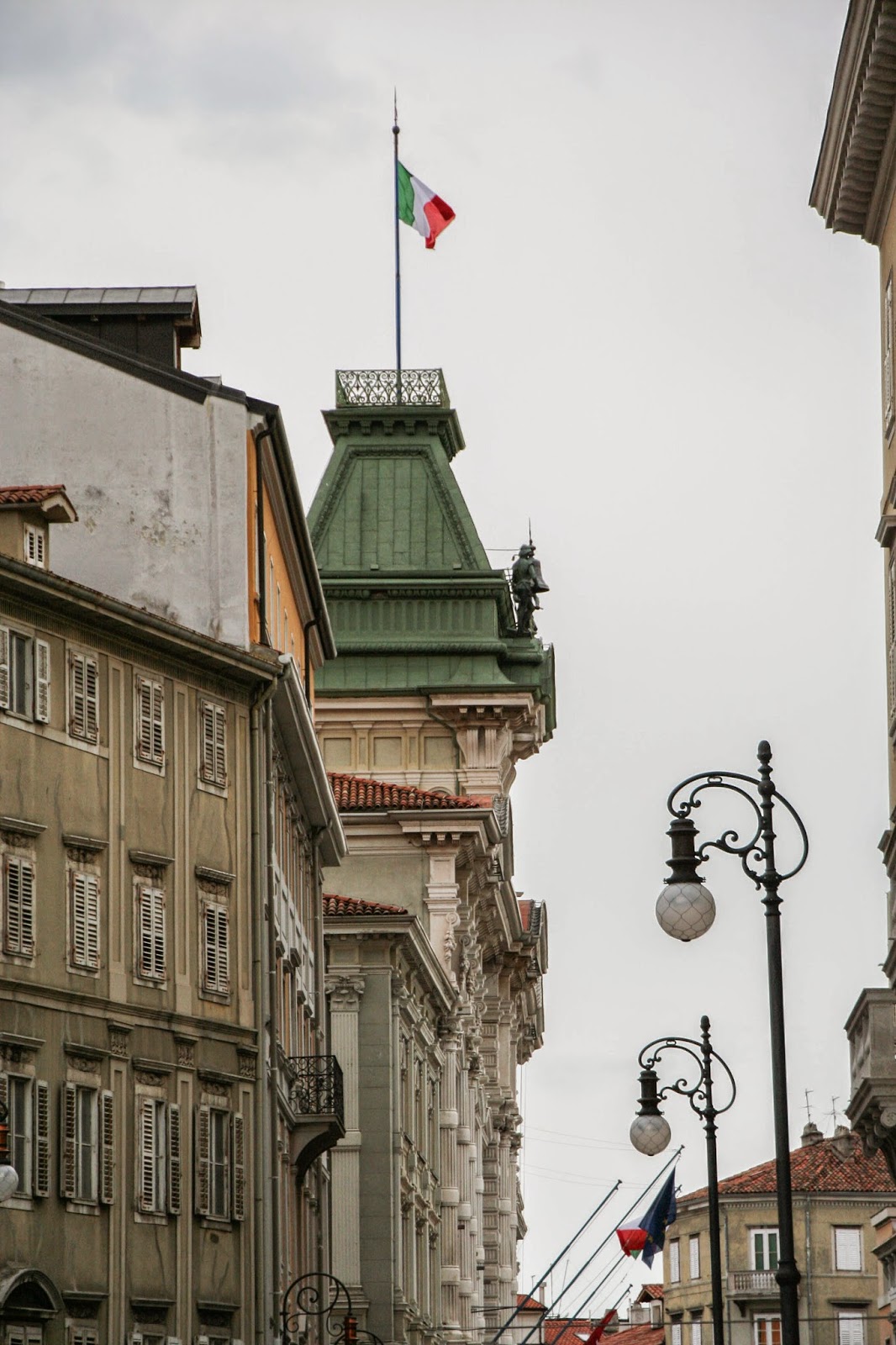 But I wasn't in Rome or Istanbul or Venice or Slovenia... I was in Trieste, an interesting, lively, and not-so-little city that I had never really heard of before this trip. 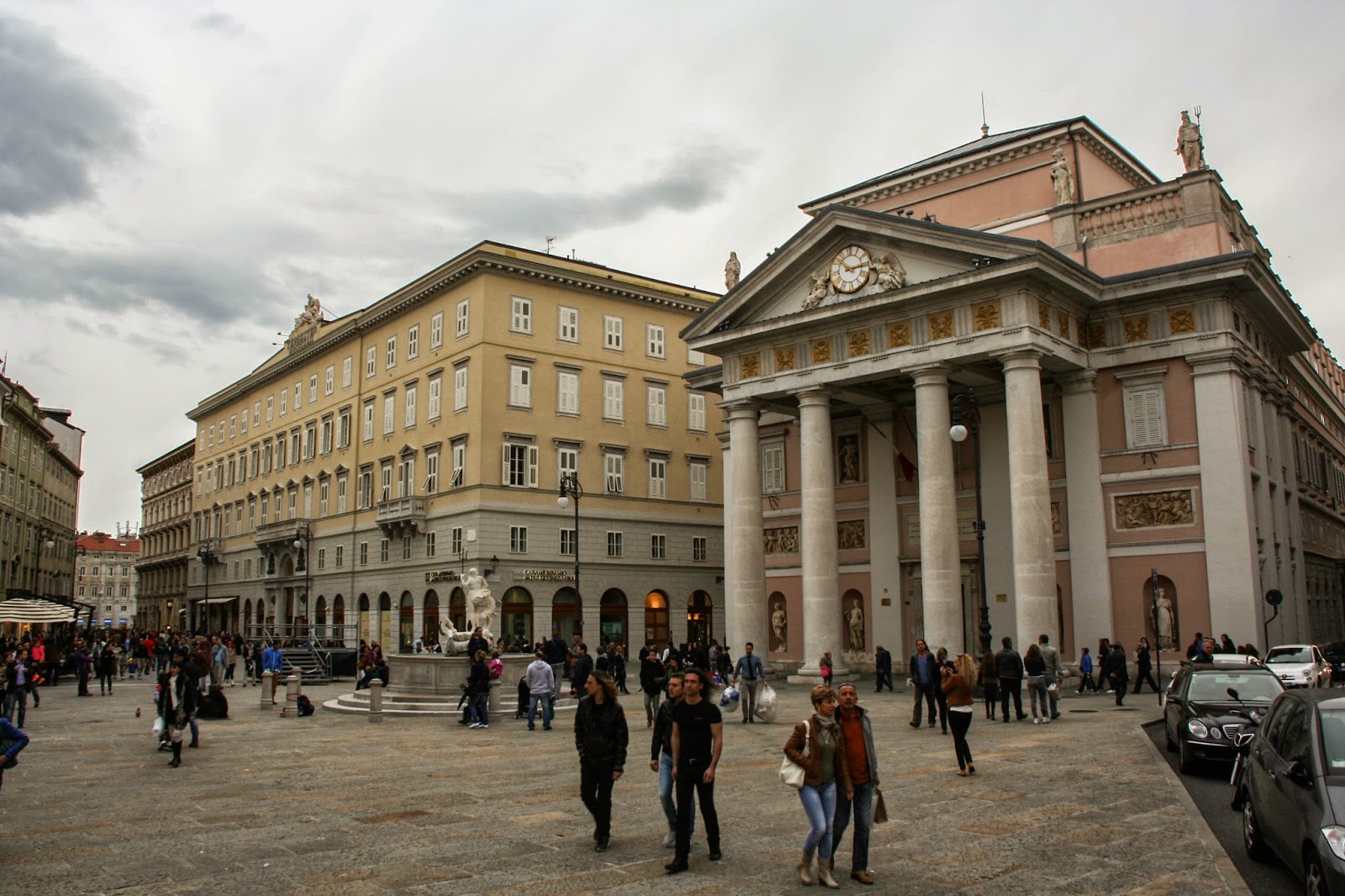 Despite the lost-grandeur-of-eras-long-gone feeling, the people of Trieste were seemingly all about one thing: enjoying life.  The streets were packed with pedestrians, people out shopping, eating, drinking, and relaxing in public spaces, markets, restaurants, cafes, and bars.  It made for a very lively atmosphere, despite the overcast and dreary weather. 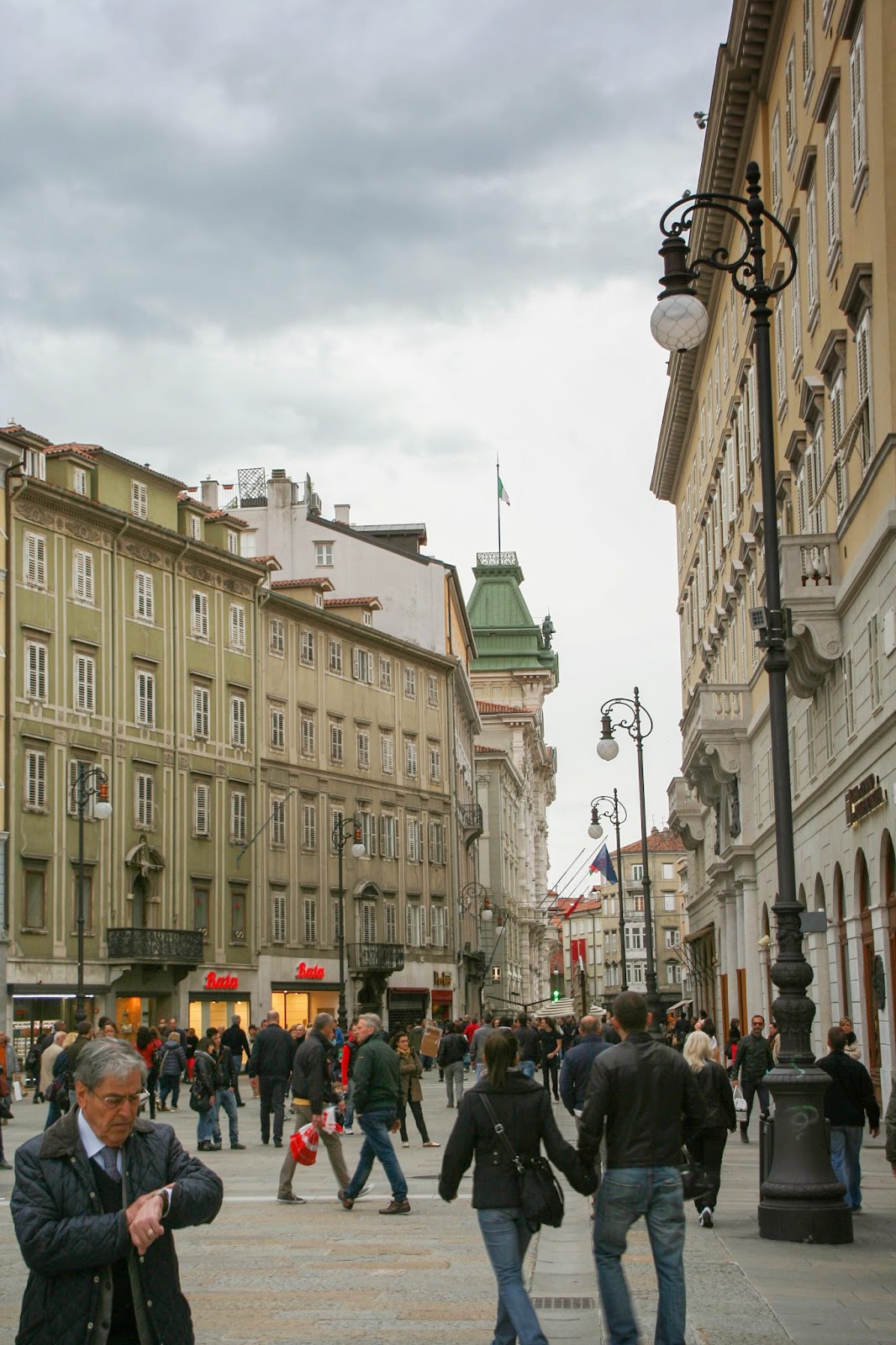 Italy is part of the Group of Eight (G8)... an economic group of eight of the world's strongest - and dominant - economies.  This is something that I hadn't really appreciated before visiting.  It was quite obvious that the locals had relative wealth... people were dressed well (very well), many of the stores were high-end, and there were plenty of locals eating out in the many, many restaurants around town (so many in fact that it was tough for us to get a table without reservations!). 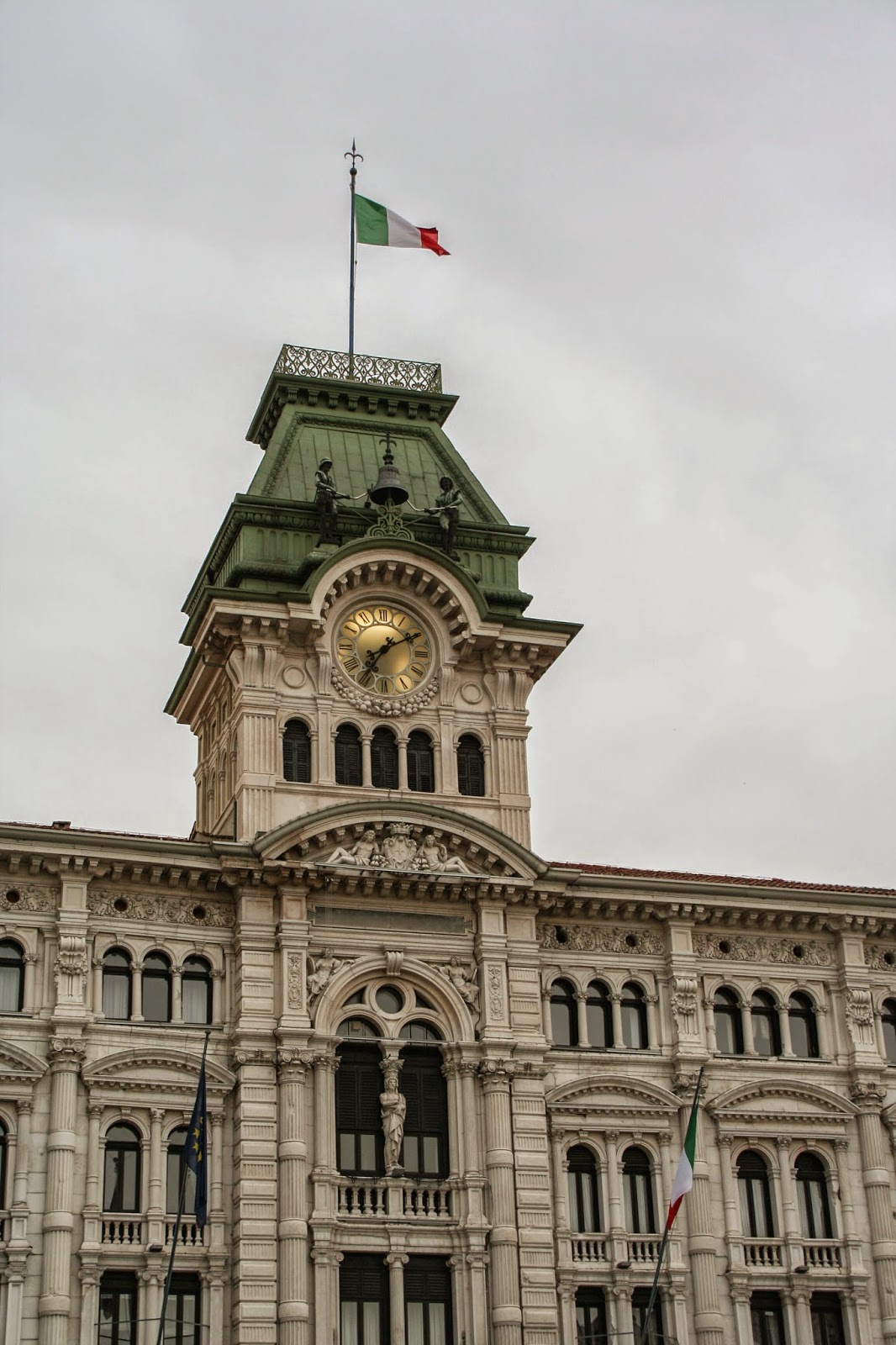 This is the showpiece of the Piazza Unita d'Italia, the main city square opening onto Trieste's waterfront.  Like much of the rest of the city, the buildings along this square were also quite grandiose and heavily ornamented. 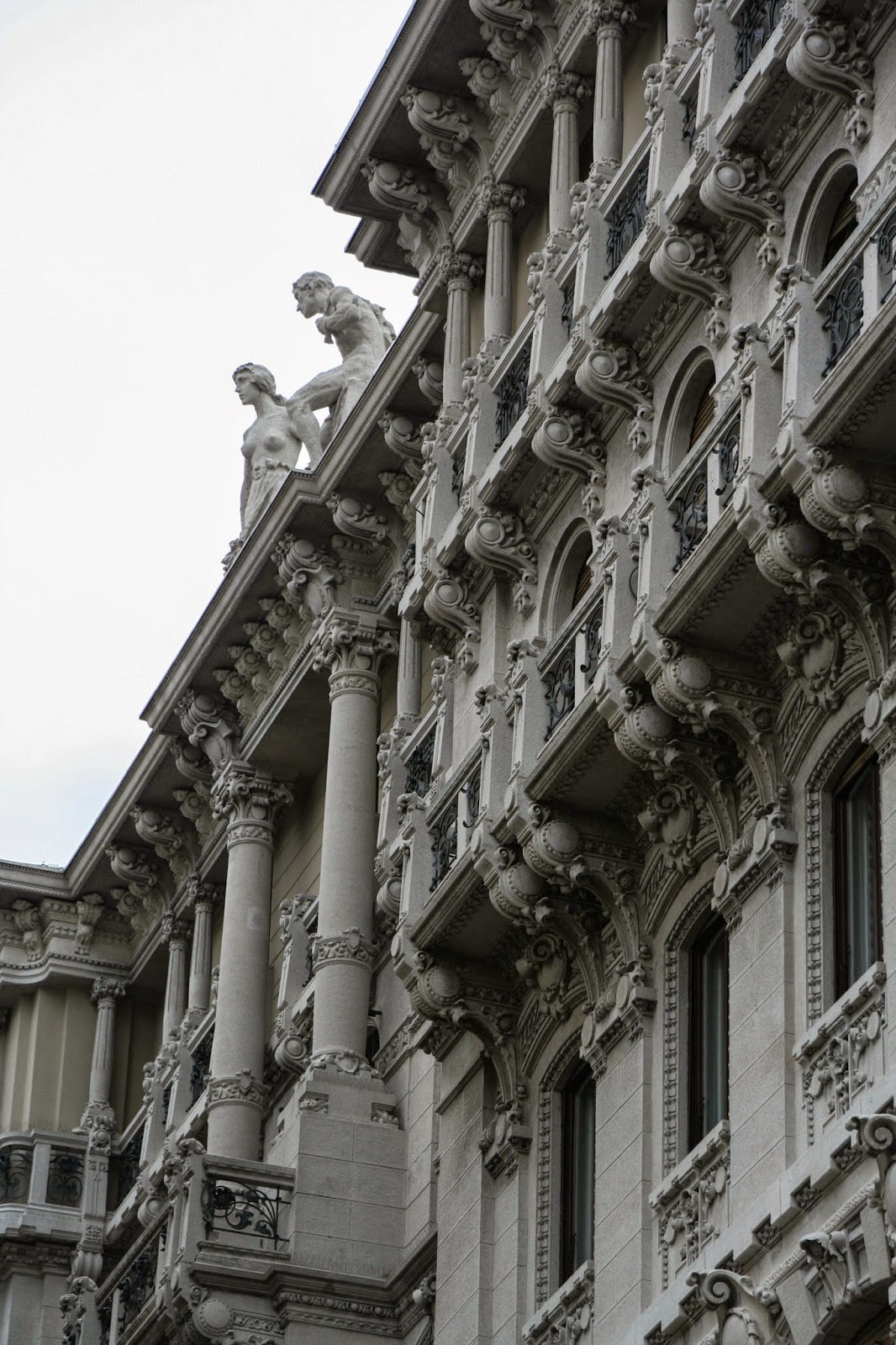 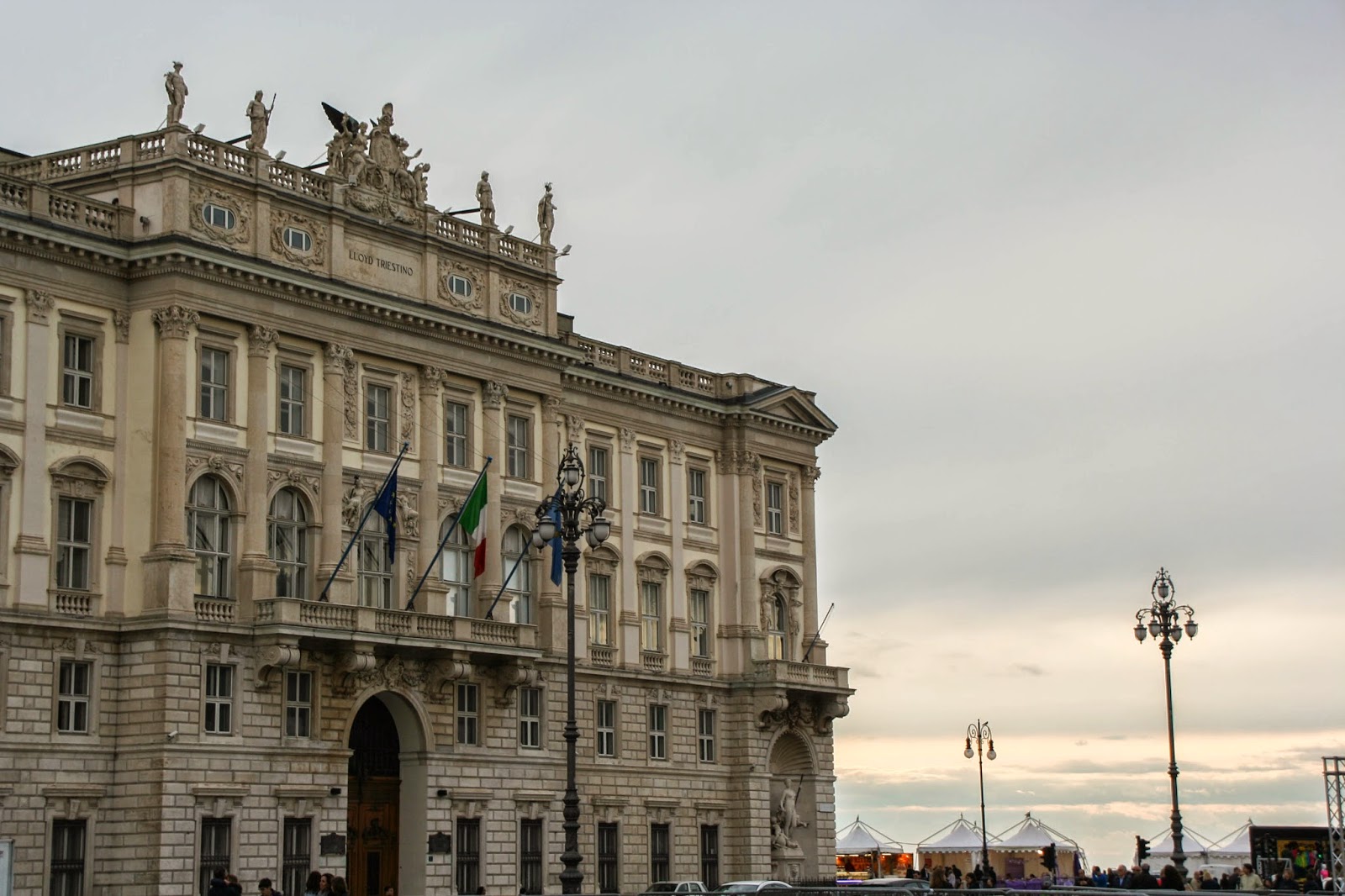 Looking out from the square onto the waterfront.  There was a market set up in the tents across the street from the square.  That street was one thing I would definitely change about the city layout... it is big and crazy busy and effectively disconnects the square (and the rest of the city) from what could be a much more atmospheric waterfront area.  I found the same along the Canal Grande actually... the presence of vehicular traffic really kept the place from being truly charming and inviting.  I was surprised by the amount of pedestrian only ways in the city center, particularly right around the Piazza Unita d'Italia, but then there were places like the waterfront and the Canal Grande that were just begging for pedestrian-only spaces but were held back by cars and trucks on the roads adjacent to them.  I understand the practical reasons for keeping such a street open to traffic, but it really did take away from the appeal of the place, for both tourists and locals I'm sure.  I genuinely hope that the future of great city centers is pedestrian only, with maybe some acceptance and access for public transport like street cars, buses, or light rail (and definitely subways); there is nothing like walking around a charming place unhindered and unmolested by vehicular traffic. 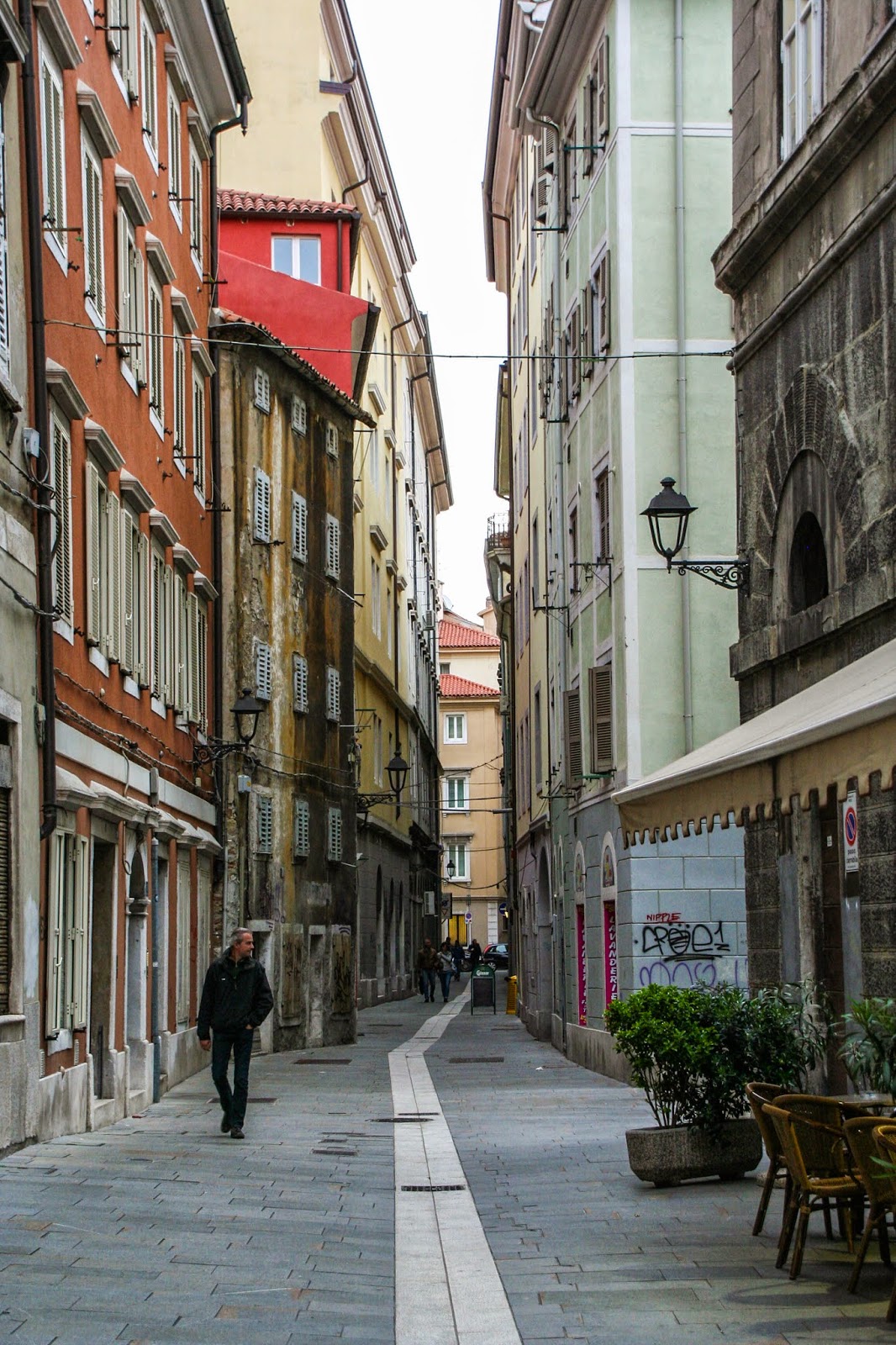 In the backstreets, things started to remind me a lot more of the Europe I'm more familiar with. 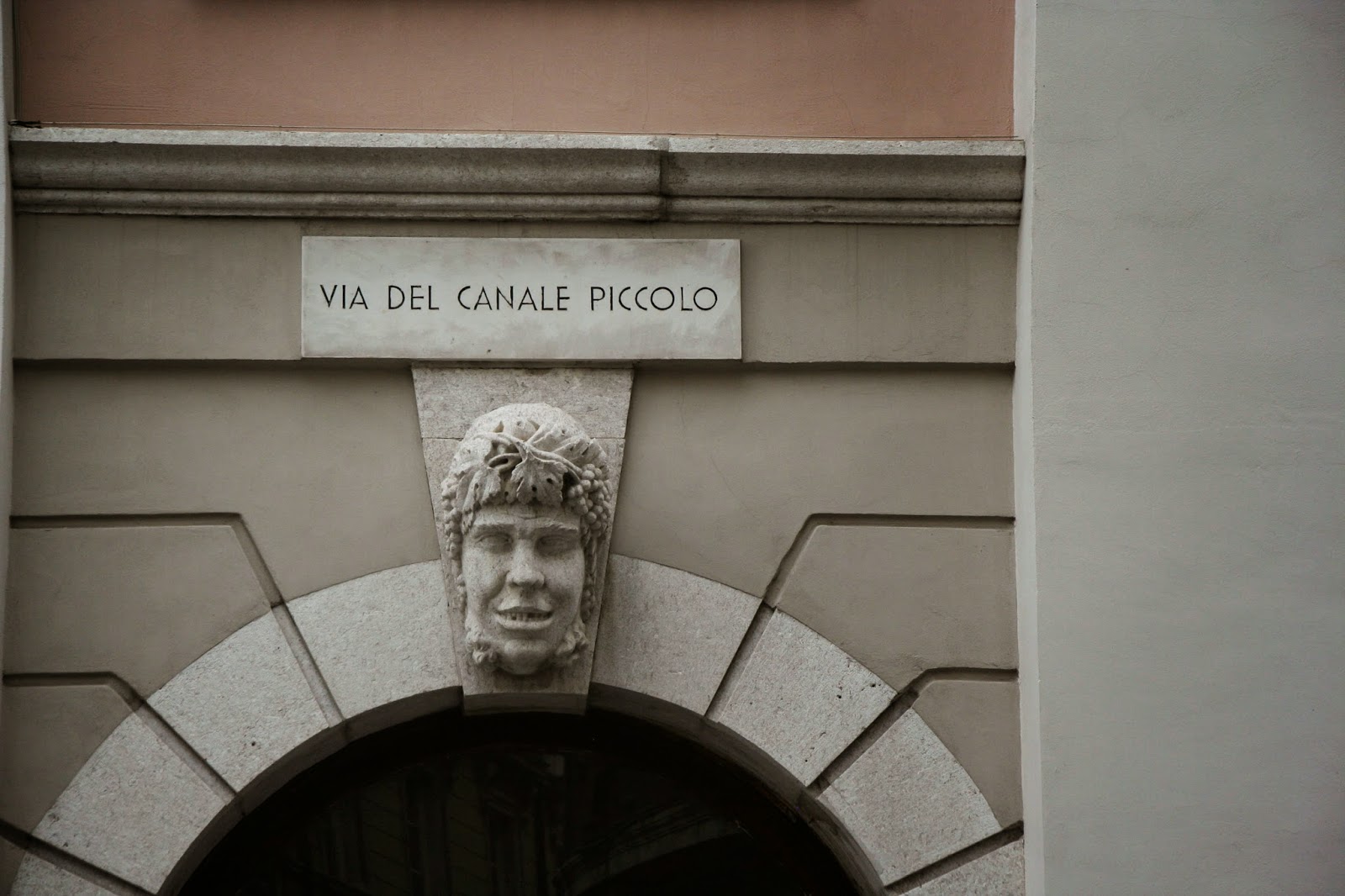 Trieste had plenty of smaller, finer details hidden all over the place too.  It's these details that are what make a place truly brilliant in my opinion.  They add those little touches of character that make you appreciate wandering and make random wandering so much more rewarding. 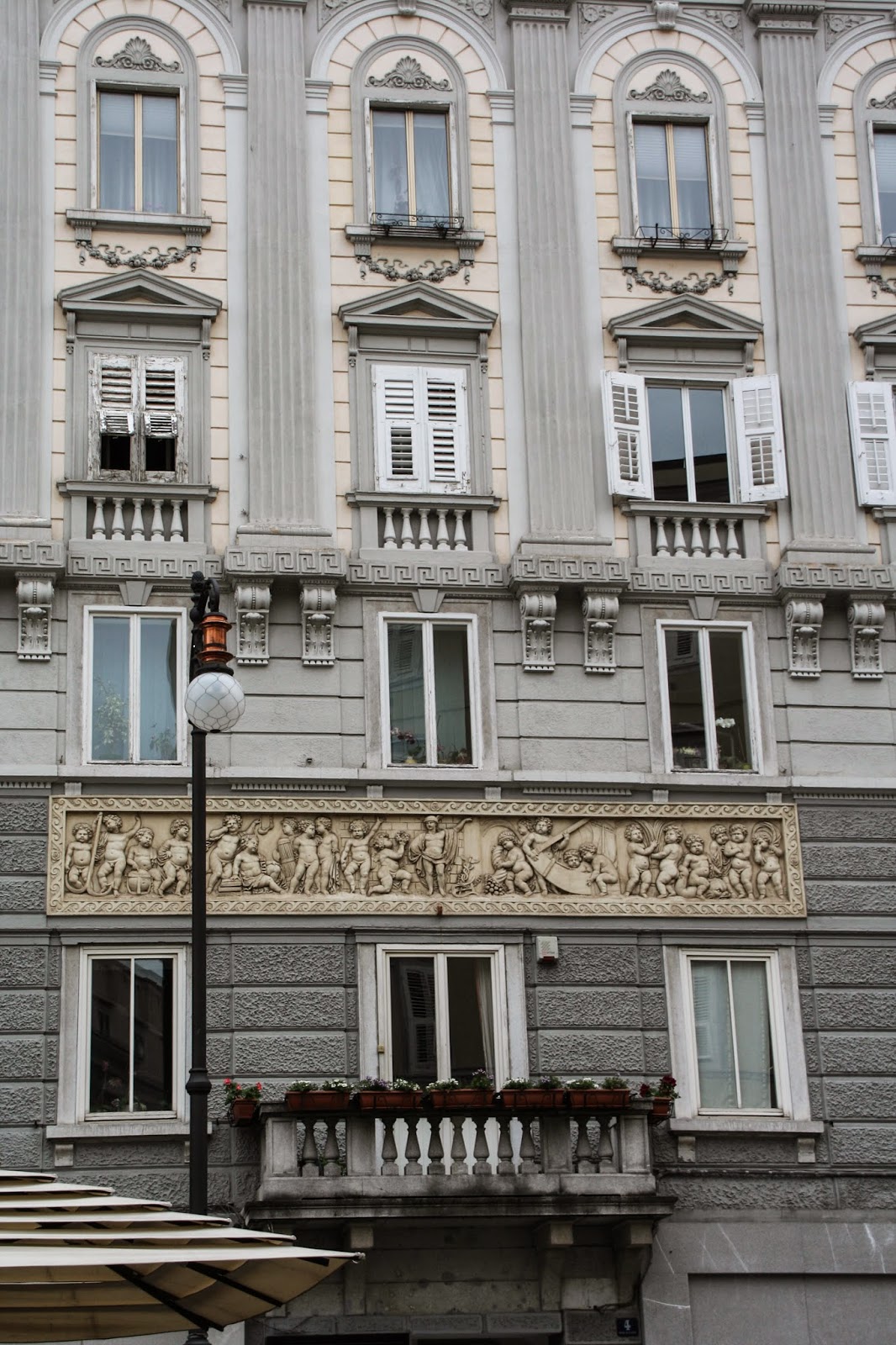 Check out this random relief too... I say that, in general, we need more public works of art of all types around the world.  They add so much to a place's character and charm, but more importantly, they tell visitors that the citizens of a place appreciate their city and take the time, effort, and money to showcase that appreciation and make it so that they and visitors can enjoy that city more. 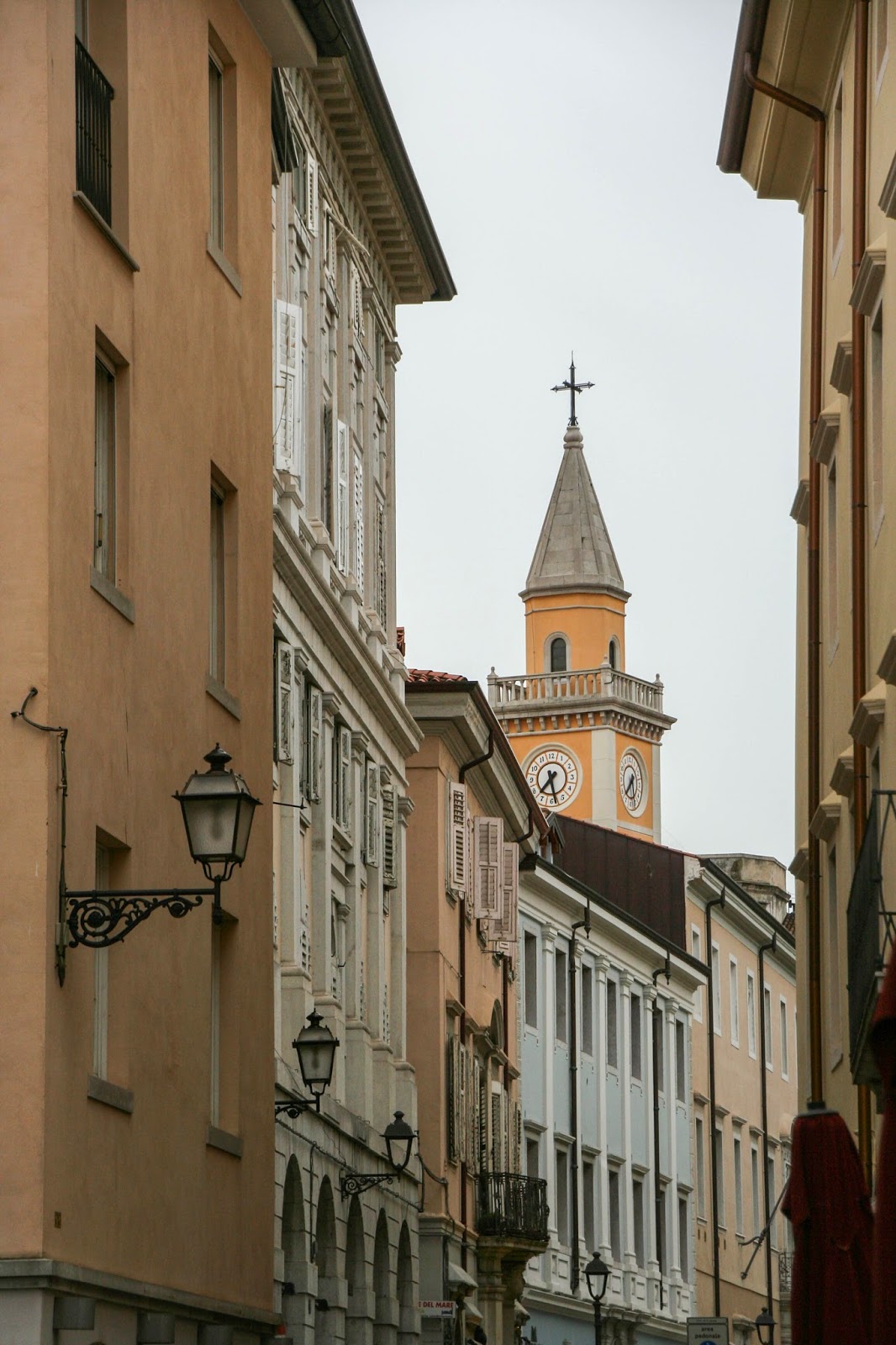 We ended up eating dinner at a random place that actually had a table available when we got there.  We spent about 40 minutes trying to find a restaurant, and despite having plenty of options, all the rest were packed full and did not have any available tables without reservations.  The place we found was tucked away down a little alley between two main streets east of the main square.  It was also busy, but there were two tables left, and we got one of them.  I ended up getting a clam and asparagus pasta (like linguine but more square shaped in cross-section) and seafood medley fried in olive oil with lemon and pepper and house white wine.  It was one of the best meals I've ever eaten.  The ingredients were all obviously fresh, and each was cooked perfectly.  The thing that blew my mind the most was the pasta... it was al dente and seemed infused with the perfect amount of salt and the dish's light white wine sauce.   How the pasta ended up infused with flavor like that while still being so perfectly al dente remains a mystery to me... but it left me hooked and requiring more, like a habitual drug addict after their first hit of heroin.  The clams and asparagus served on top of the pasta complemented each other and the pasta and sauce perfectly too.  The fried seafood medley was fantastic as well... salmon, sardines, calamari, some type of flaky white fish, and prawns each fried to light, delicious lemon-peppery perfection.  Each one had to be in the oil for a different amount of time, and each was in for just the right amount of time.  To top it all off, the inexpensive house white wine (about the same as the price of bottled water) was delicious and went great with the dishes.  My first taste of Italy left me begging to get back and eat more... I'll do what I can to return as soon as possible and spend some legitimate time exploring and eating in that country. 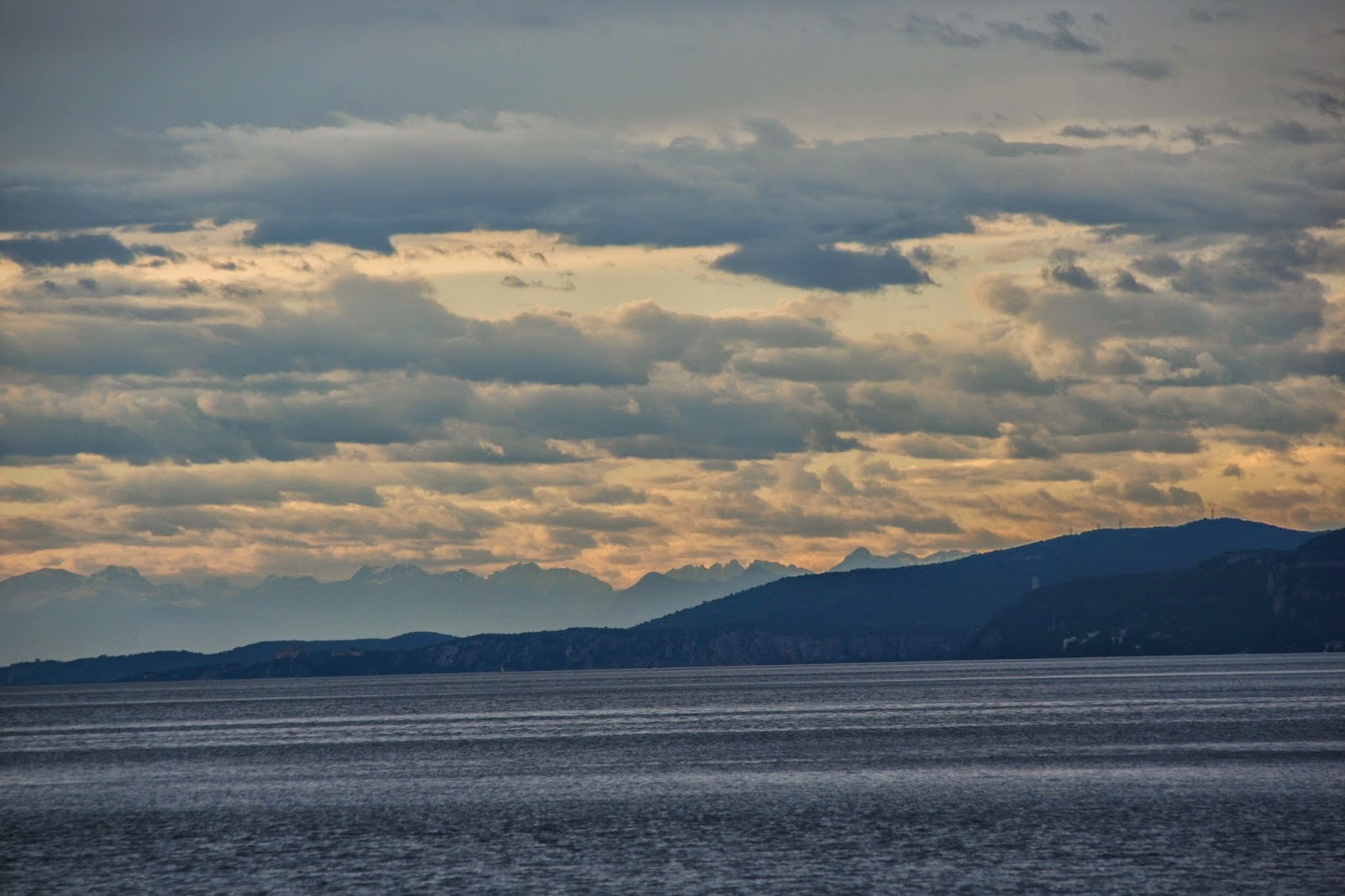 The view north and west over the northern Adriatic, in the directions of better-known Udine and Venice, from Trieste's waterfront.  Those are the Italian Alps in the distance... another sight that left me drooling to return.  I can't wait to get back to Italy, though I already feel like no amount of time will be enough to explore that country.  If Trieste peaked my interest so much, I can only imagine how overwhelmed I'll be by the rest of the country.  Like a few other choice places,  Italy already seems like a place I will have to return to multiple times throughout my life, and I hope to return again to explore more soon.
Posted by Drew at 1:02 PM