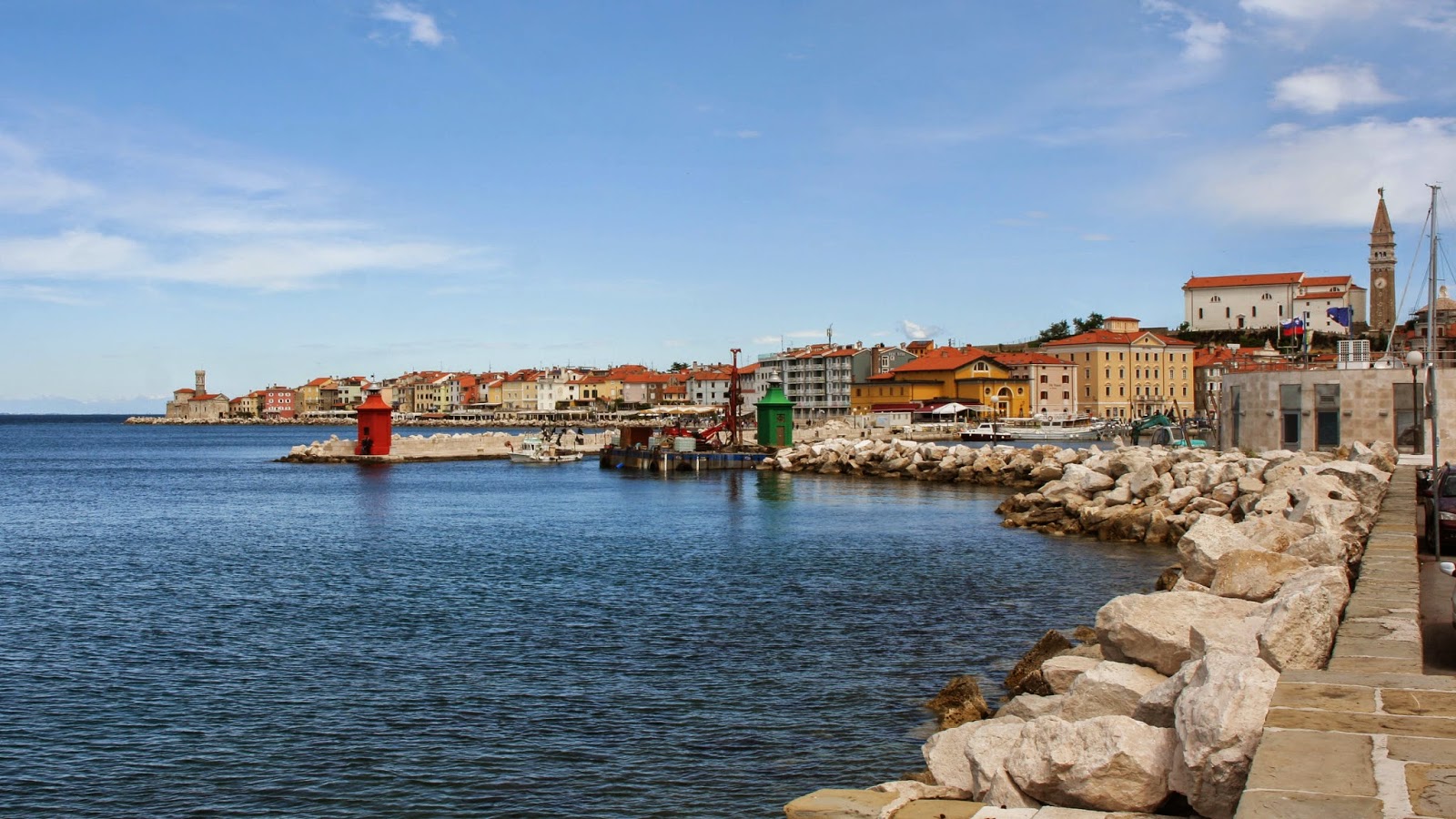 Slovenia is a country blessed with both mountains and sea.  This second post covers the coast, while the third will be on the mountains.  Welcome to Piran: a charming old city on the short sliver of land pinched between Italy and Croatia that forms Slovenia's Adriatic Sea coast. 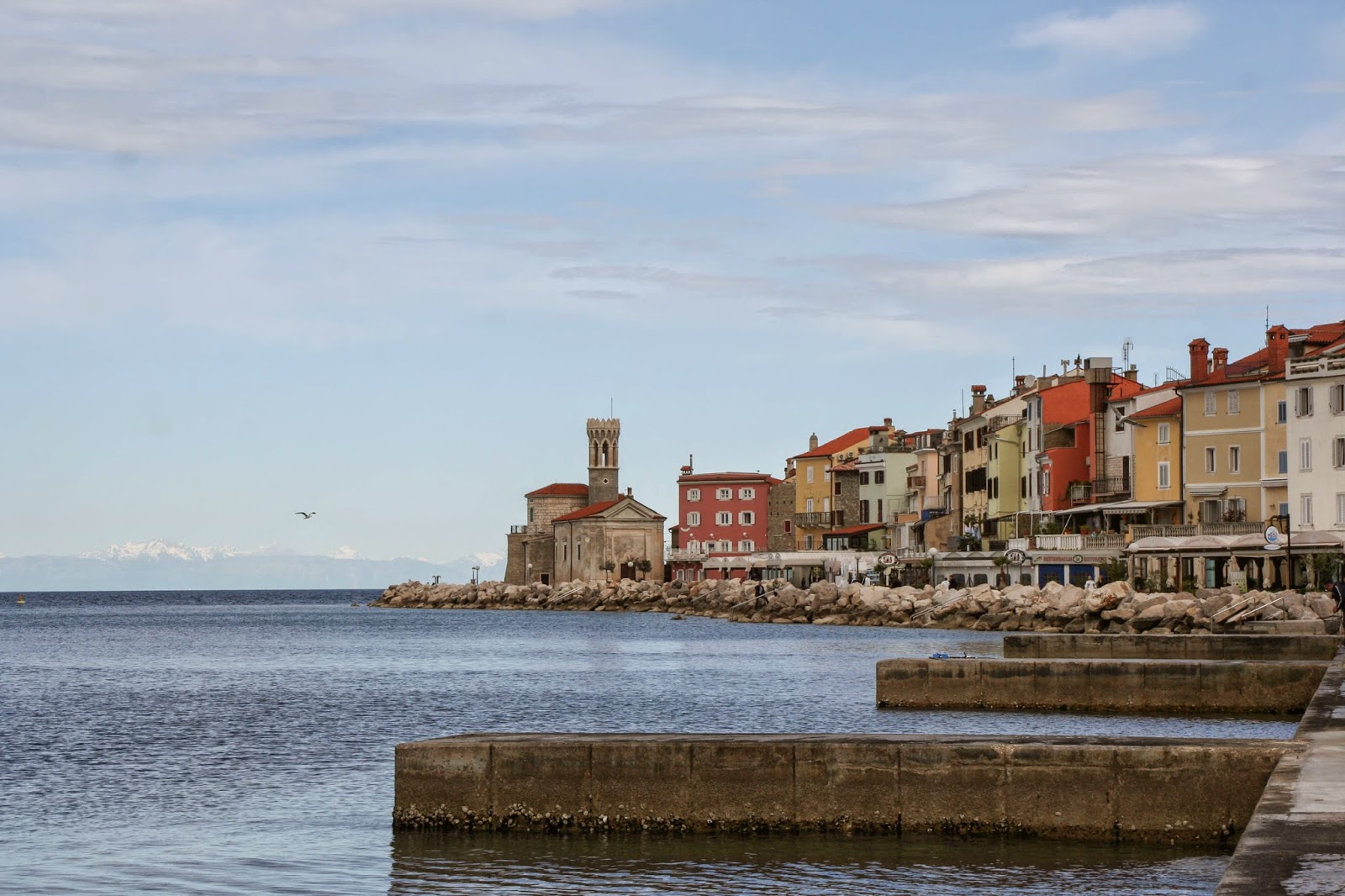 Piran is definitely more popular as a summer destination; it was relatively abandoned when we were there in April.  I'm not complaining at all about that though... it was actually really refreshing to not be overwhelmed by hordes of tourists.  The place was peaceful and quite relaxing; it makes sense that this place was a spa town in the 1800s. 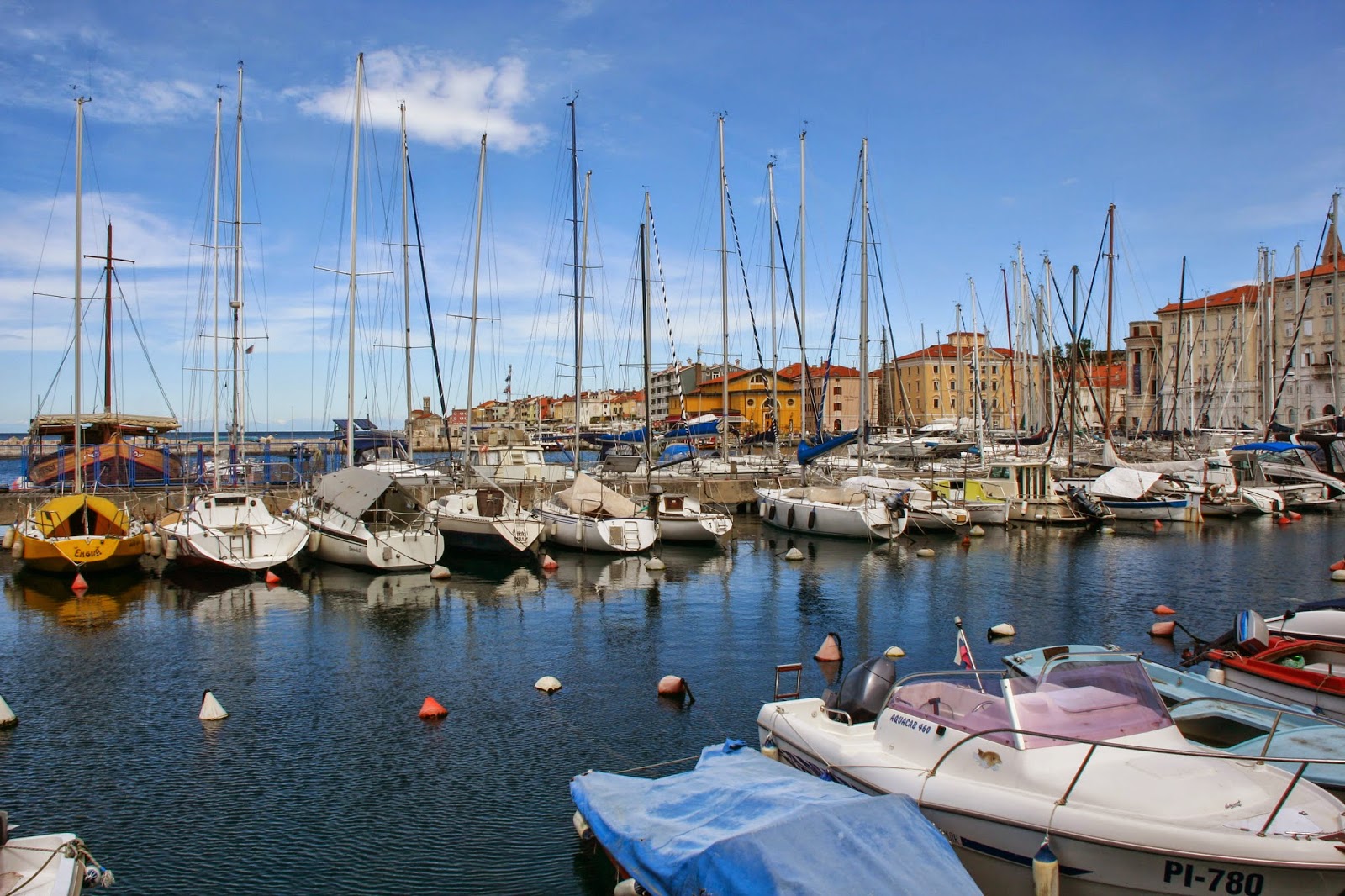 Nowadays, Piran's harbor has plenty of nice boats and yachts.  It is a popular port of call for pleasure cruisers sailing around the Adriatic. 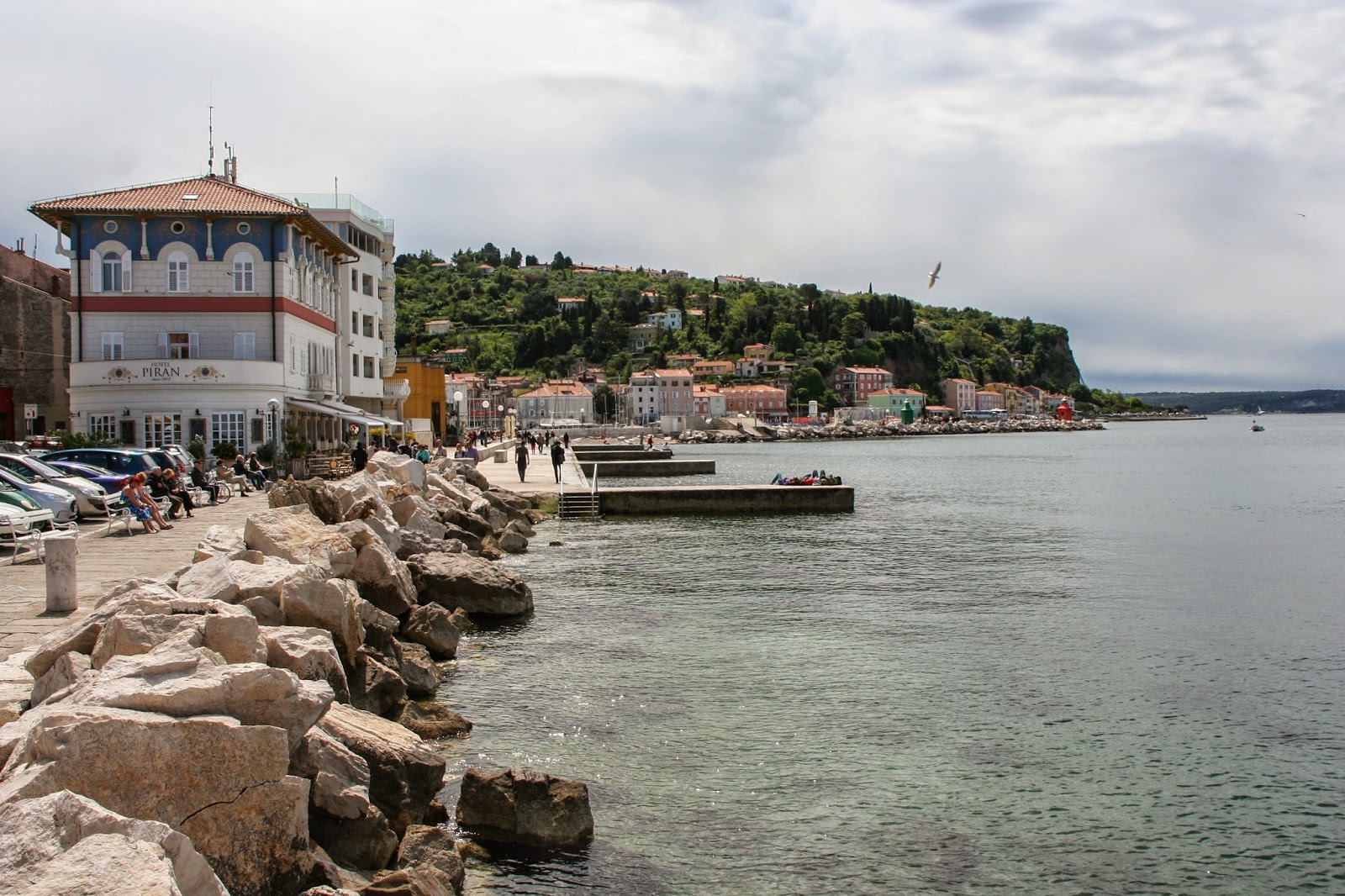 You can actually see three countries from Piran: Slovenia (of course) plus Italy to the northwest and Croatia to the south.  The town's waterfront and harbor are lined with old mansions, several of which have been converted into hotels.  Fortunately, much of the old city is just that, old, and its medieval layout has also been pretty well preserved.  The place itself certainly is charming, though it does seem like it gets swamped by tourists (I know, I'm a hypocrite), and I think that has had somewhat of a negative impact on the locals' demeanor. 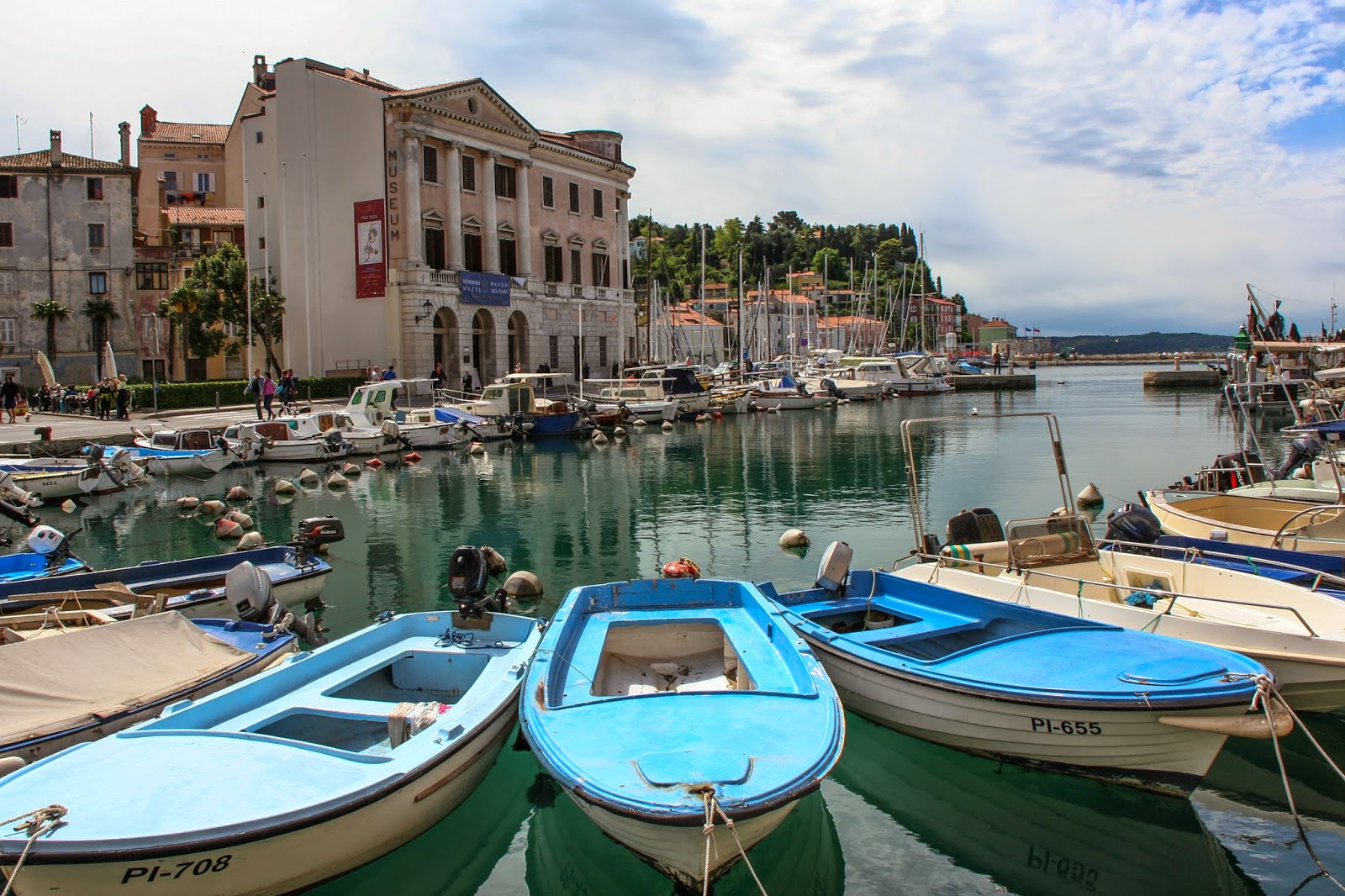 Piran was first founded as a settlement and outpost during the Roman Empire. Being situated on a narrow peninsula, the local geography was favored for settlement because of its defensive capabilities. It has continued to thrive since then as a significant port in the Northern Adriatic, surviving as part of several empires, such as the Byzantine, Holy Roman, and Austo-Hungarian, and outliving each in turn. 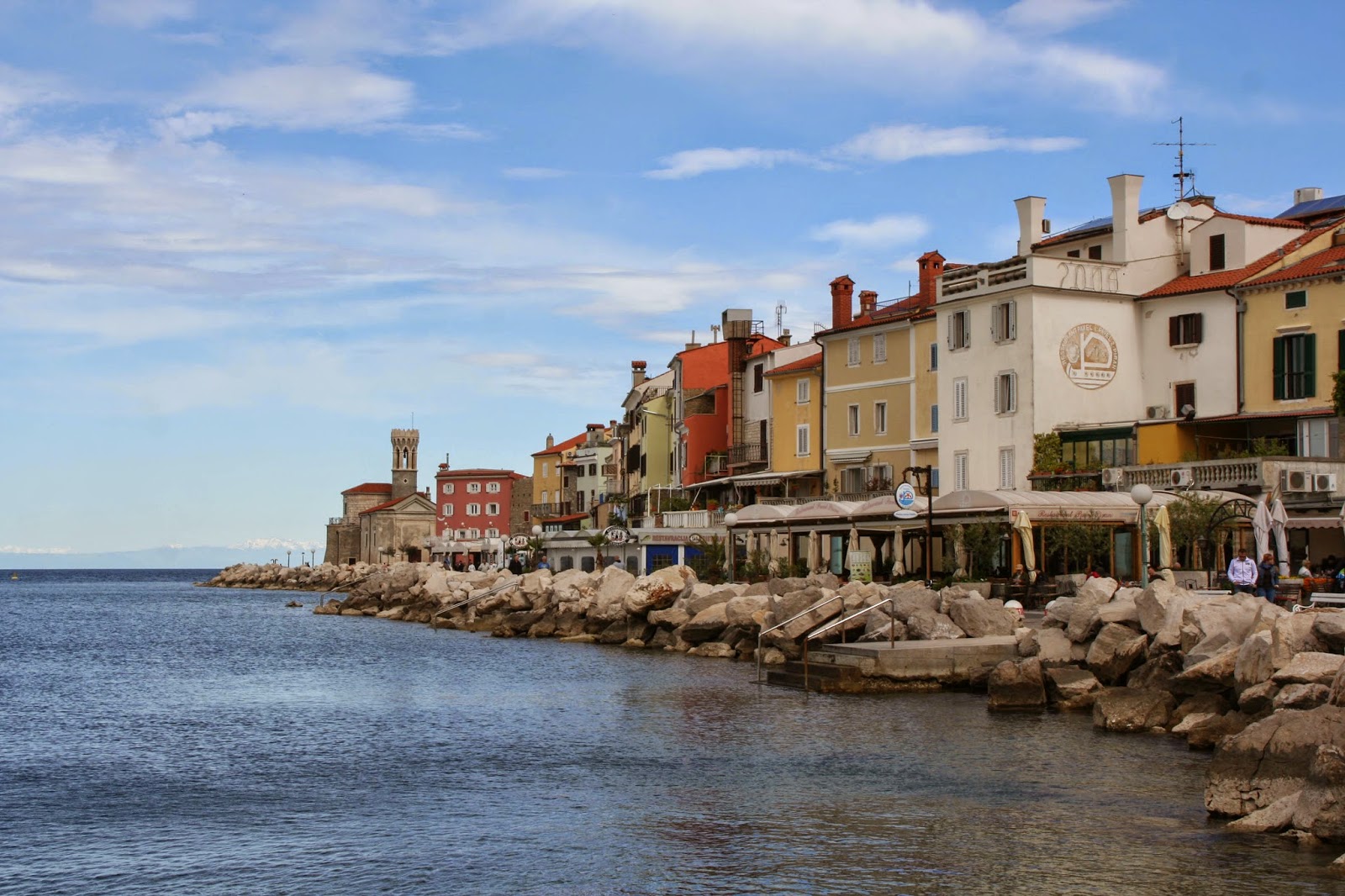 The water was crystal clear and not terribly cold either, which was surprising considering it was April.  I didn't go for a swim, since I didn't have my bathing suit, but if I had it with me, I definitely would have taken a dip.  I can only imagine what the locals and European tourists would have thought of that though... most of them were bundled up in winter jackets, which I found quite ridiculous.  People's sensitivity to climate really is quite relative. 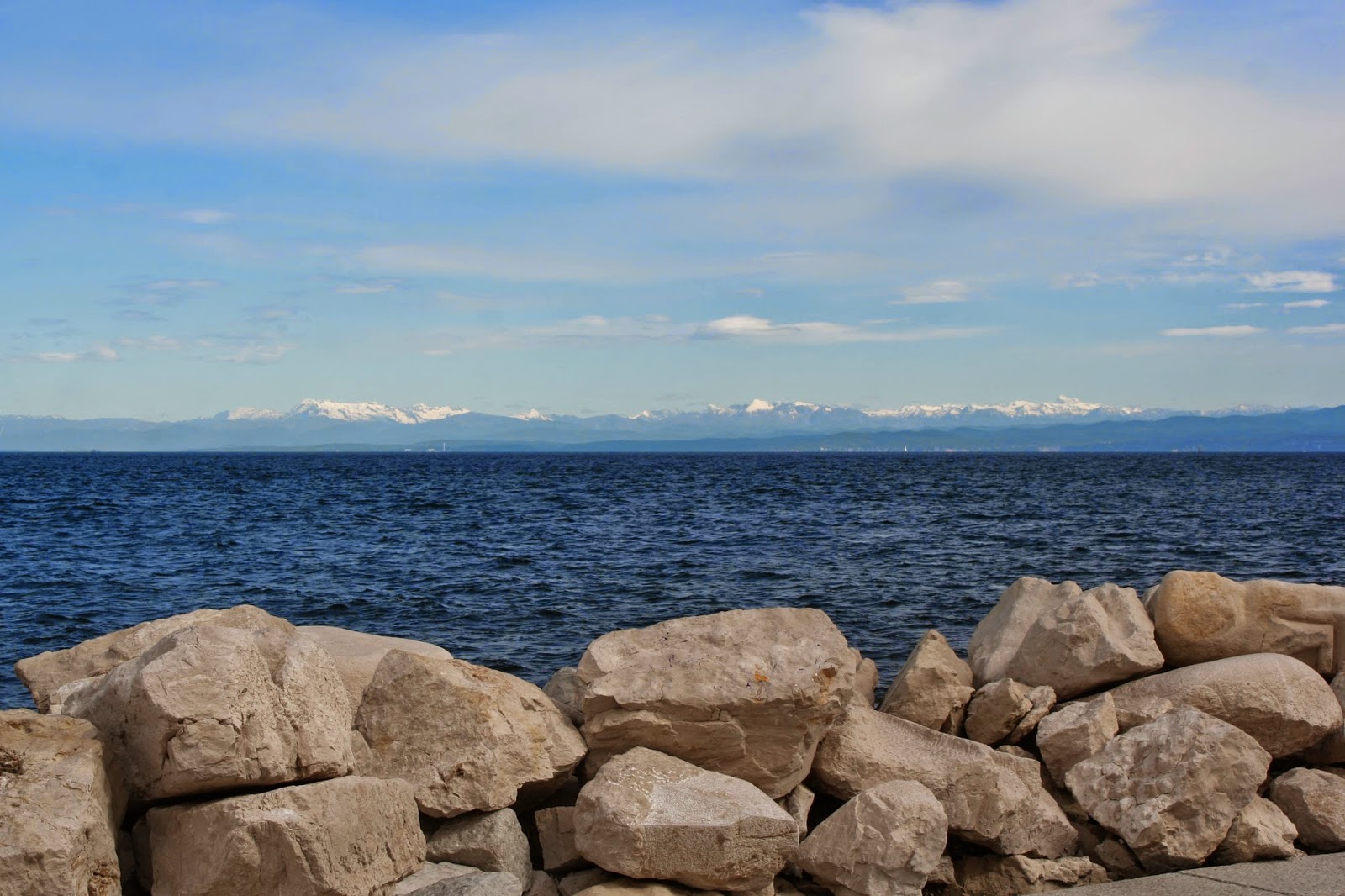 The view of the Alps across the northern Adriatic was also amazing.  Some of the best scenery in the world combines mountains with the sea... 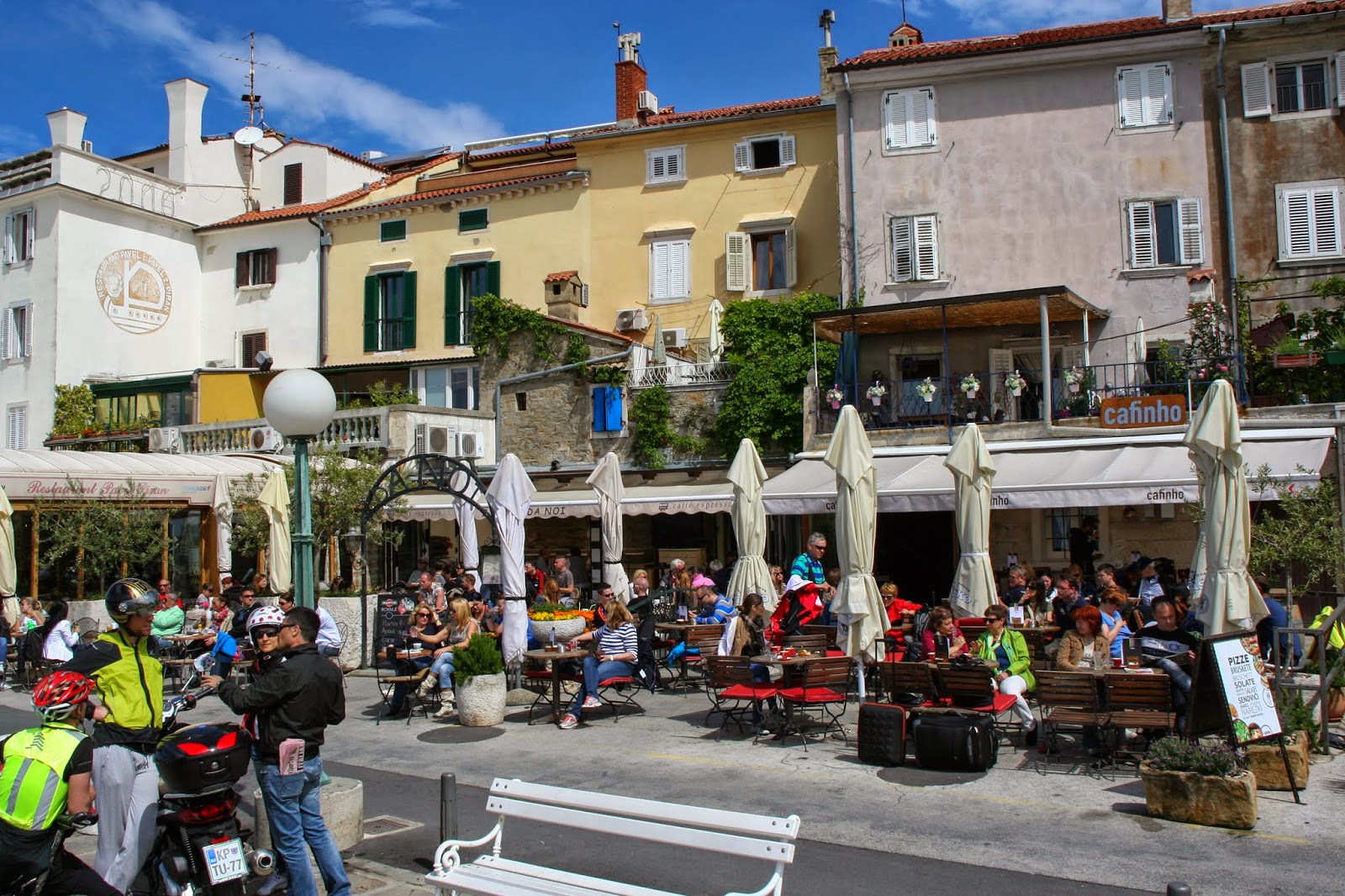 Along the waterfront, mostly everything caters to tourists with plenty of restaurants and cafes, all of which have patio seating that is perfect for people watching as well as taking in the natural scenery.... it is very European. 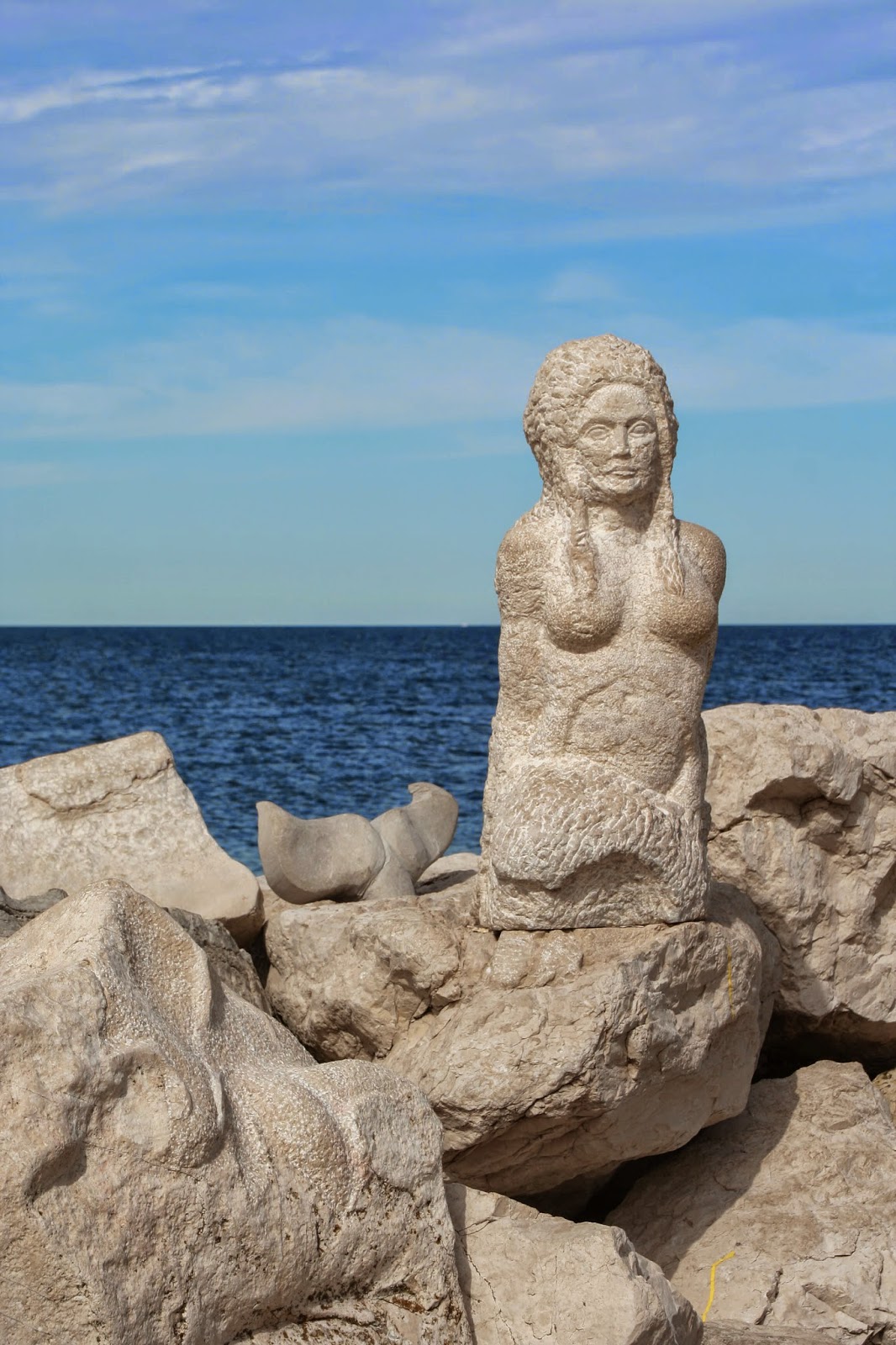 There are also several random old statues set up all over the place.  These are leftover ruins from various periods in Piran's past.  The oldest of those may even date back to the Roman Empire.  This feminine bust was craftily transformed into a mermaid with the addition of that little tail, which is obviously newer than the figurine.  My other favorite was an old lions head statue propped up in a garden just off of the main square. 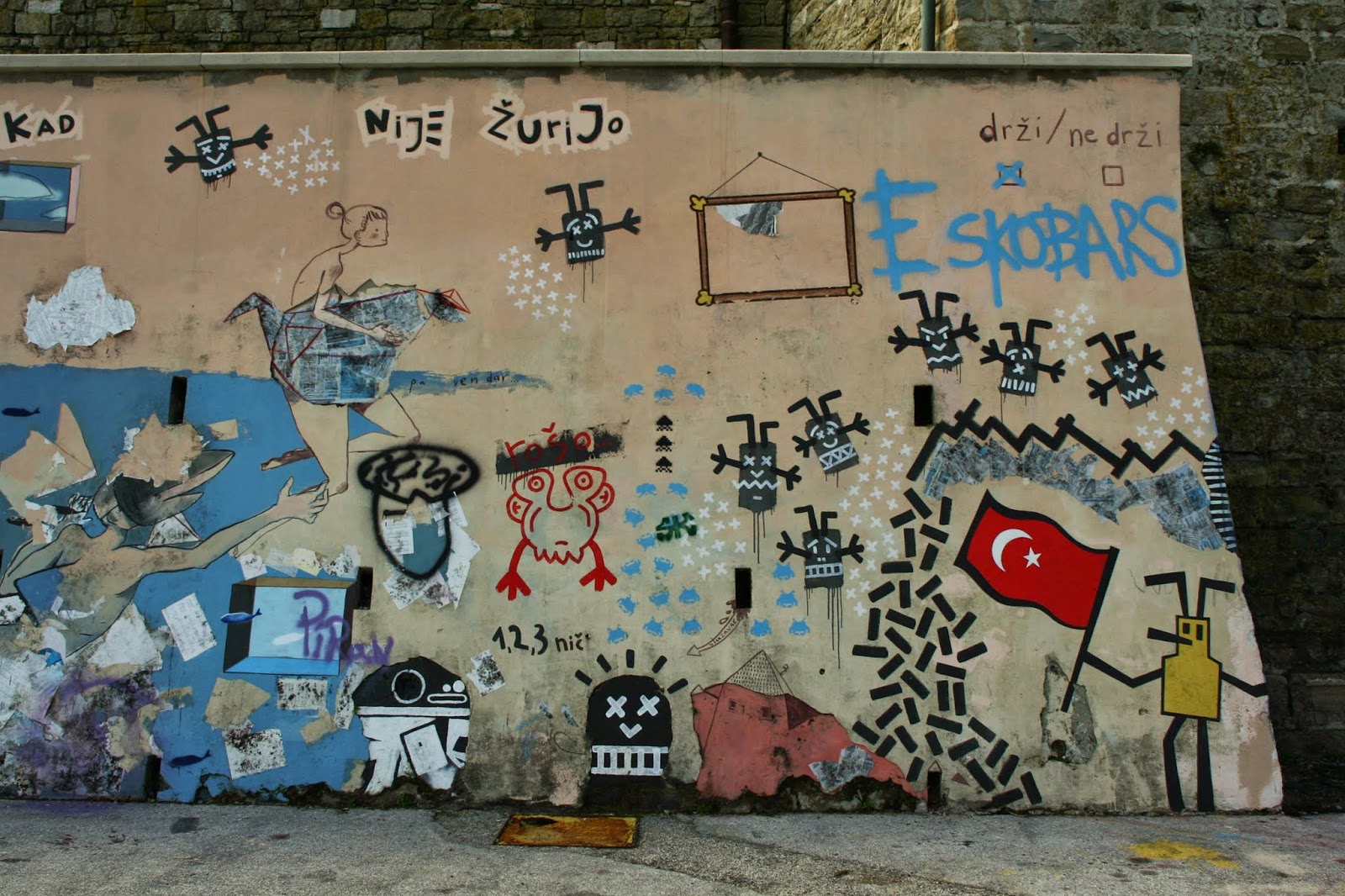 Piran offers up some nice street art too... 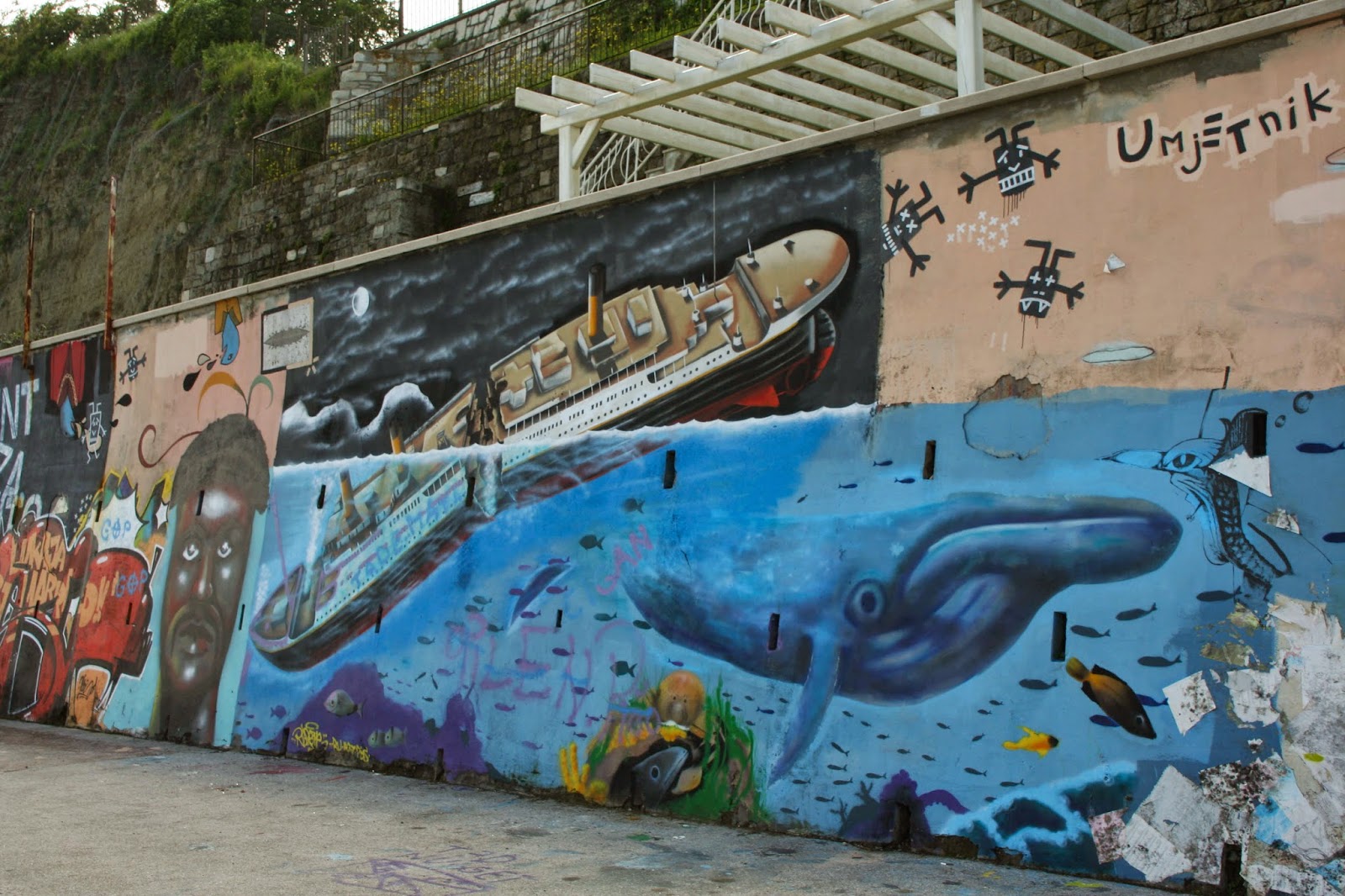 This mural was pleasantly bizarre.  It was huge and incorporated a lot of very random components, which were very amusing when combined. 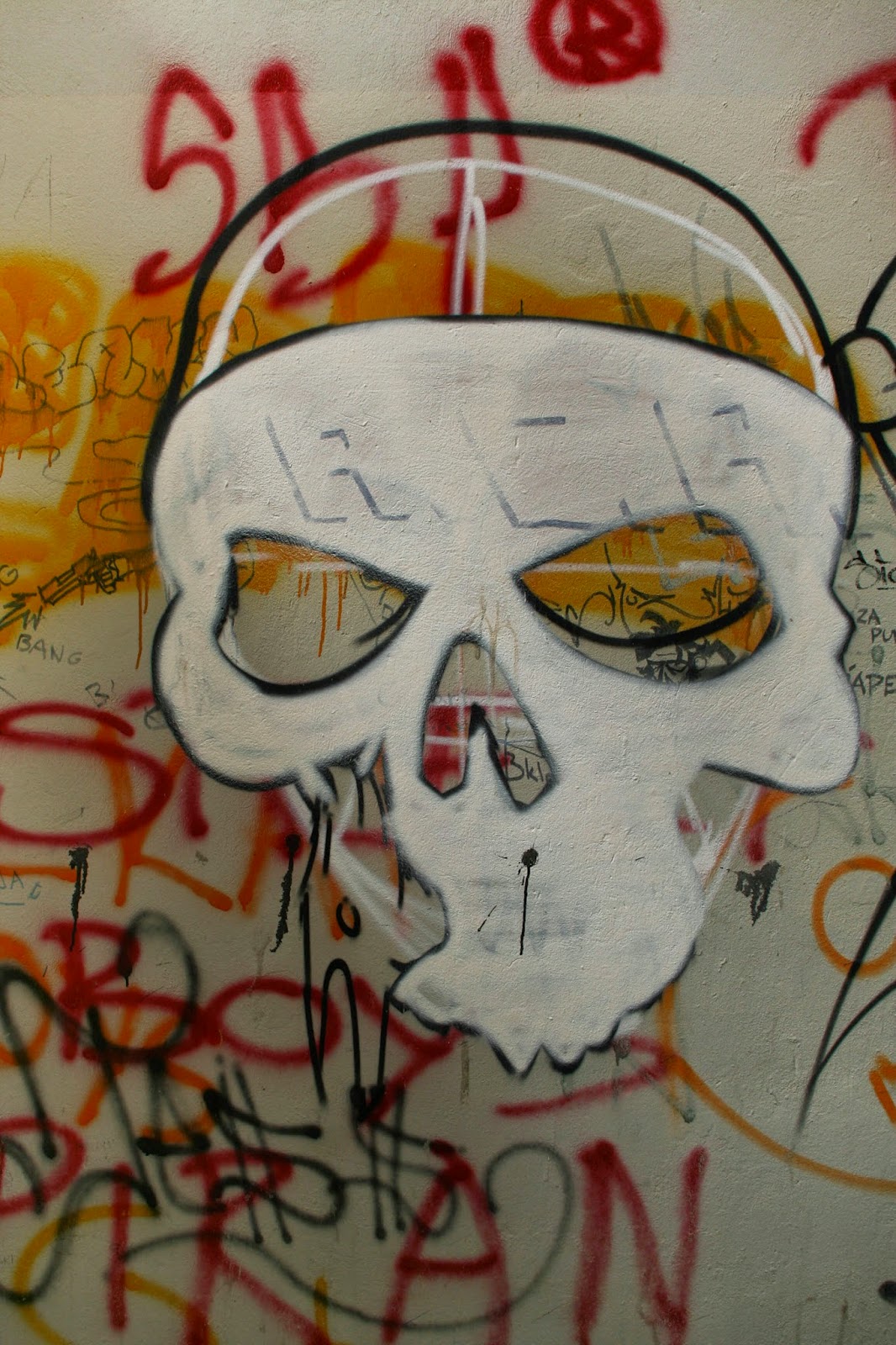 This haunting piece was in the back alleys... I loved the simplicity of it and how it seemed to pop off the wall. 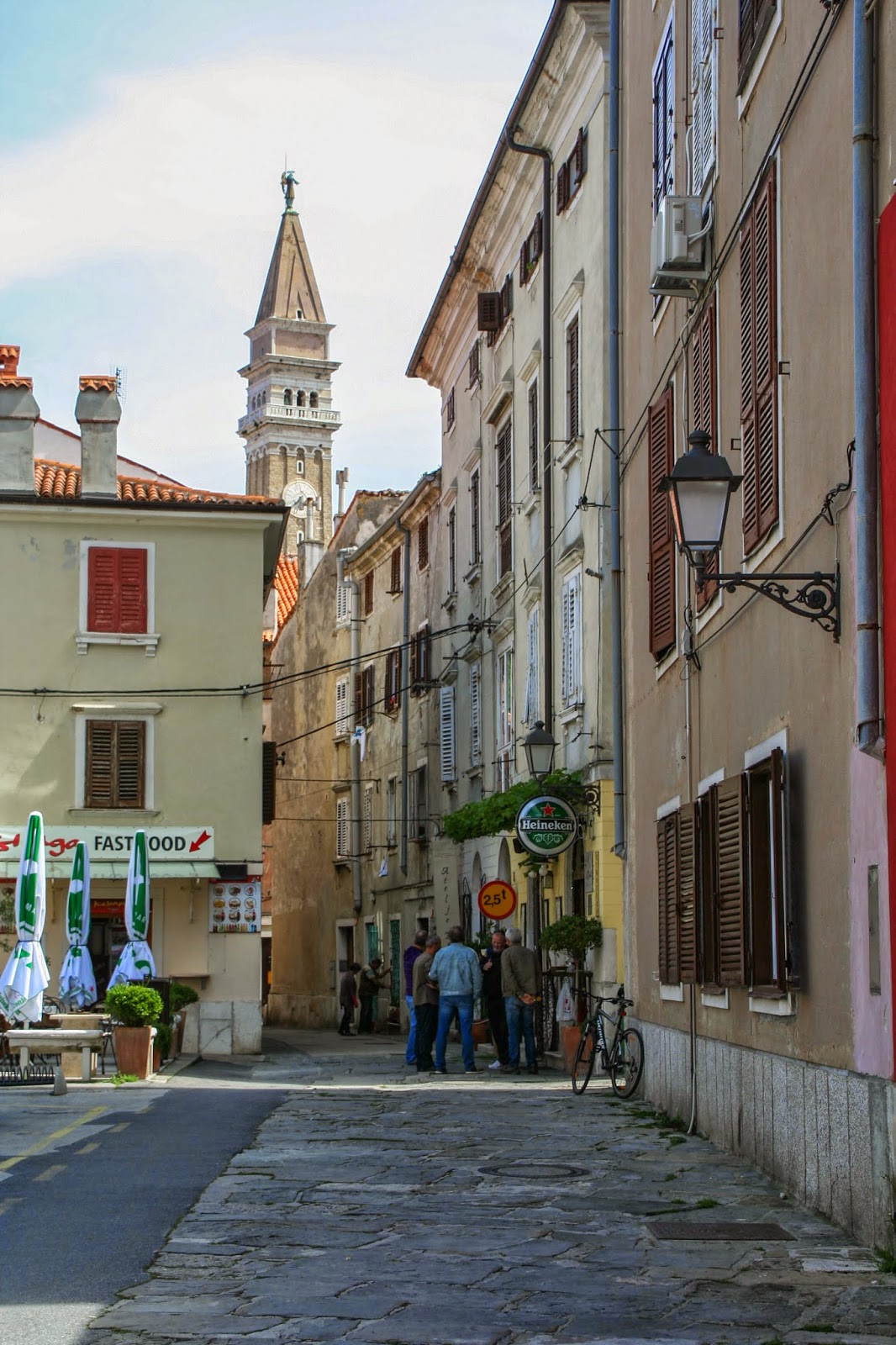 Piran - and Slovenia in general too - has some great pubs... though we found the locals in Piran to be a bit feisty at night at this local place.  The bartenders were not too welcoming or friendly and the locals at the bar clearly felt like we didn't belong in their pub.  It was not the best environment despite the legitimate charm of the pub itself. 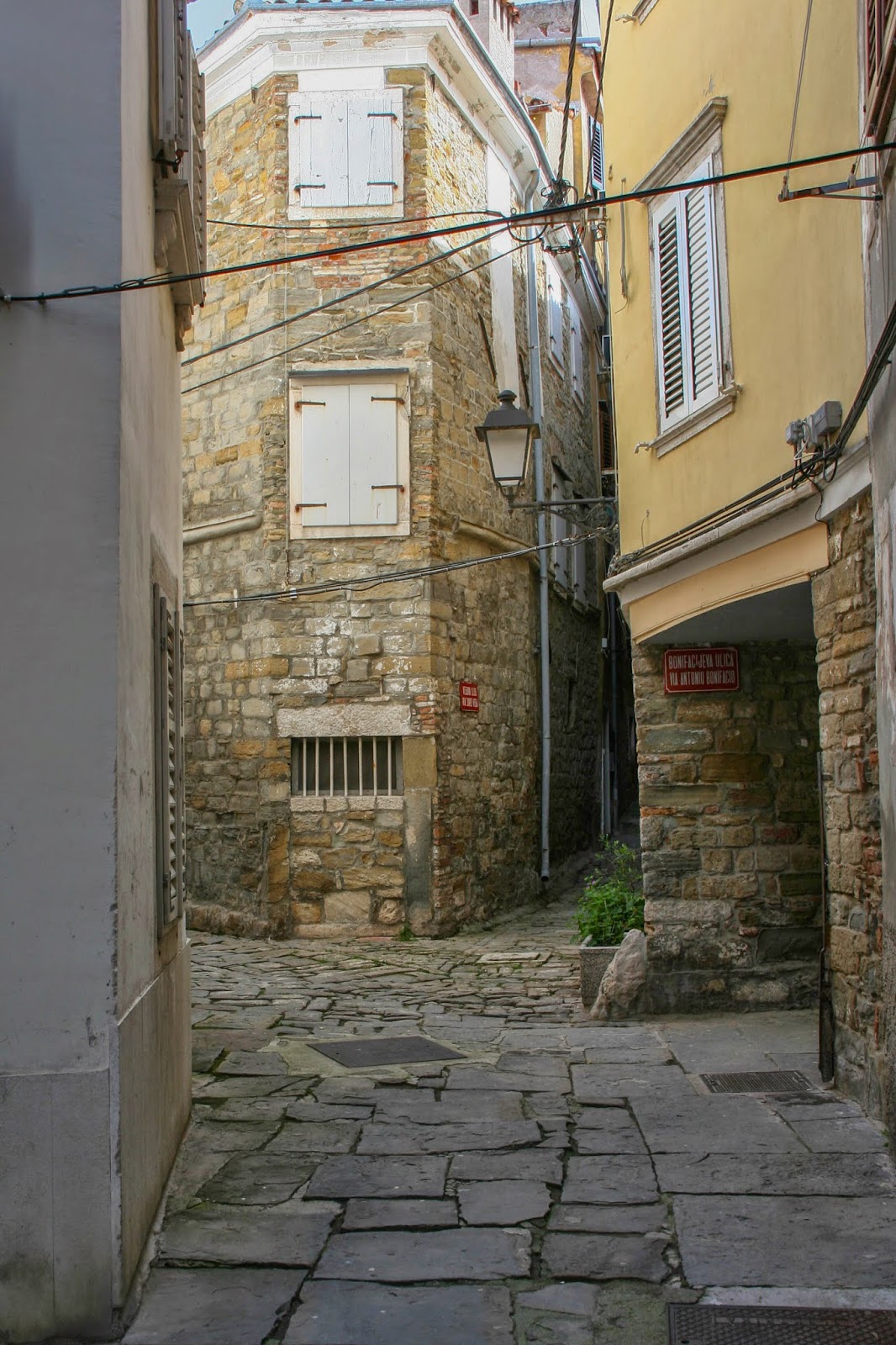 Piran's maze of backstreets and alleys are awesome to explore... if you need to get away from the tourists, just tuck back there.  It really is crazy how seemingly more than 90 percent of all tourists stick to the waterfront only.  Are that many people afraid to explore off the beaten track? 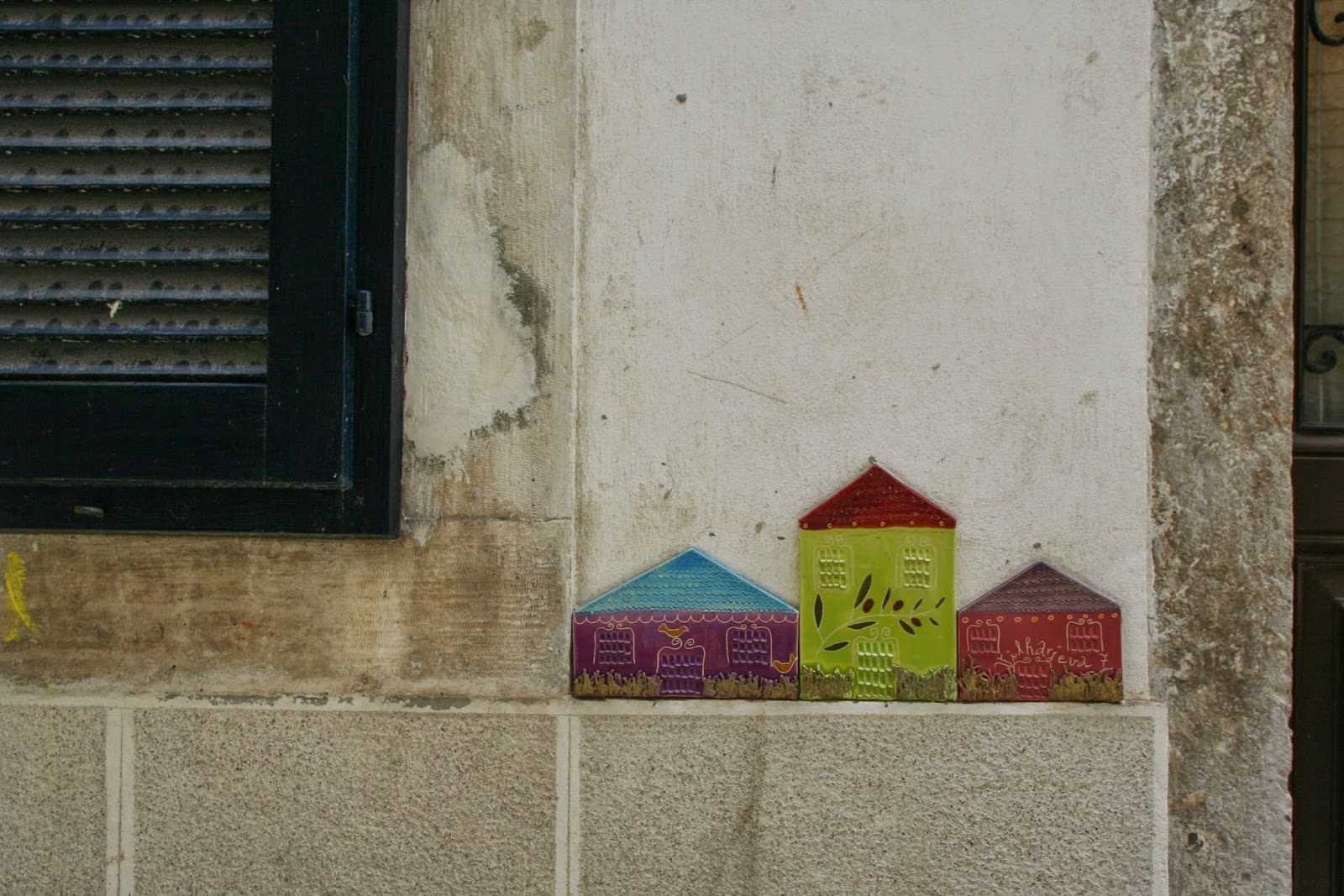 There are some great little touches and details back there too... 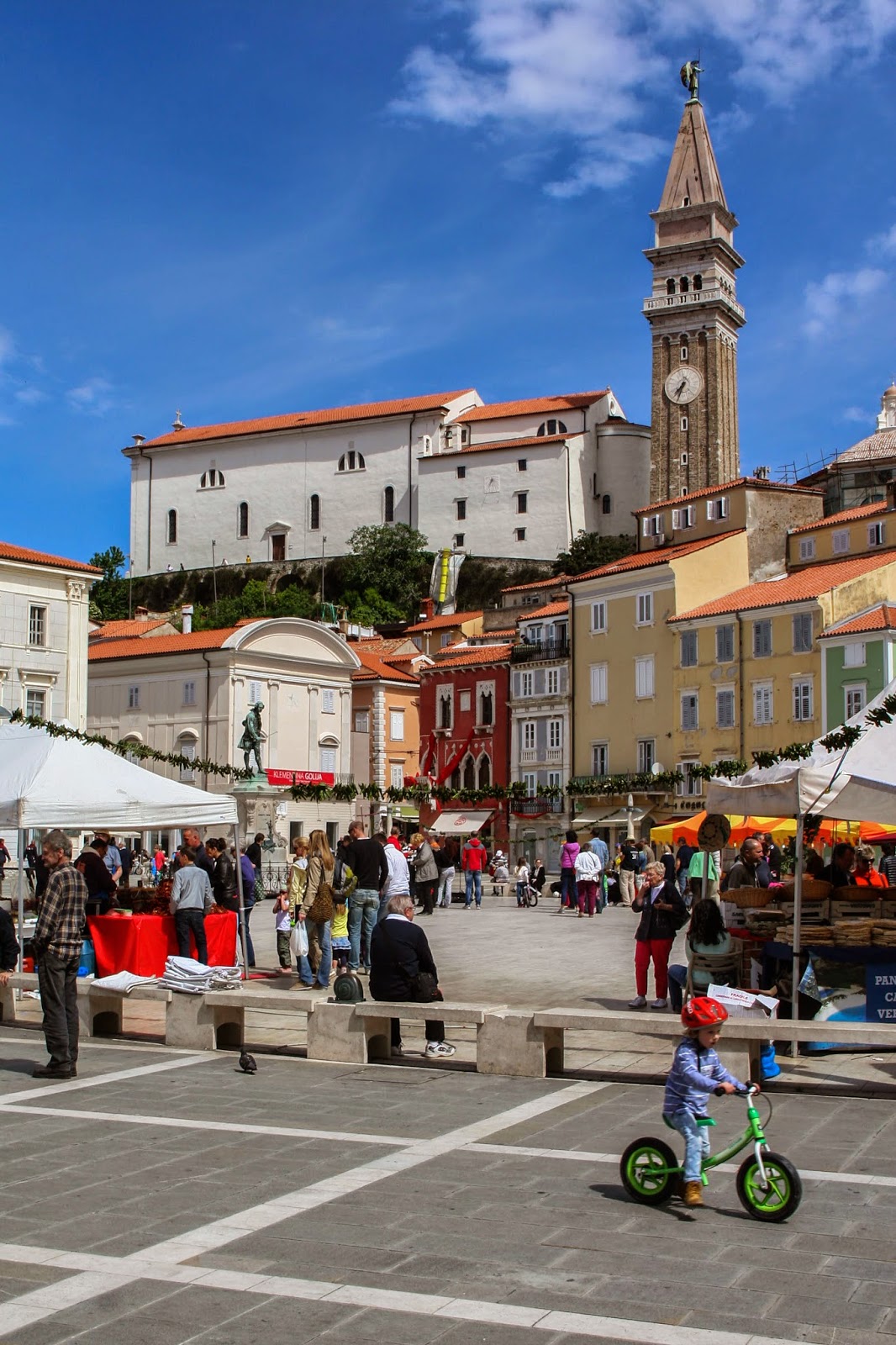 The main square and Piran's Venetian clock tower.  The square used to be an inner marina, but it was filled and turned into this public space.  On this beautiful Sunday morning, it was clearly bustling. 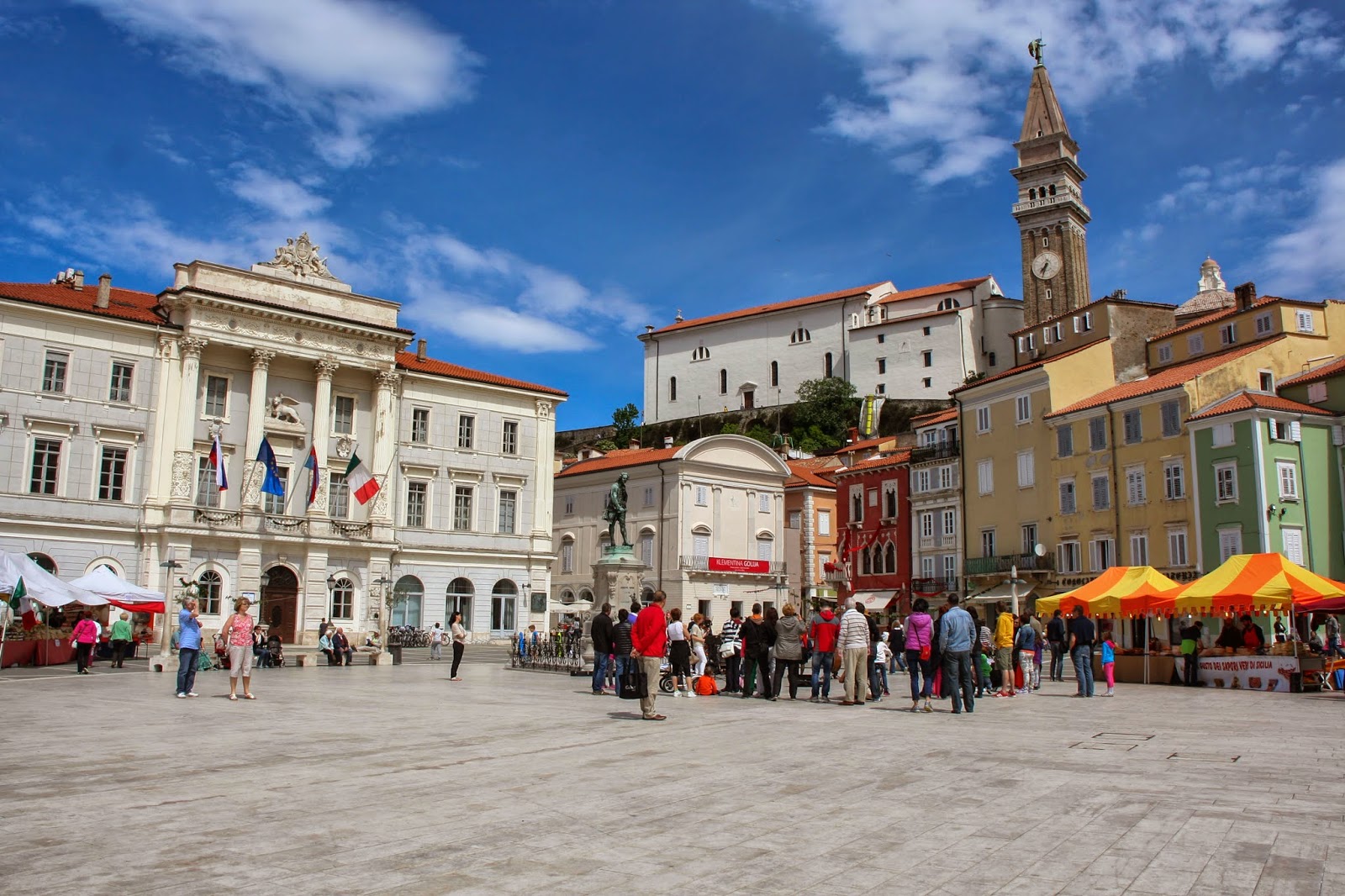 Part of the draw to the square was a local market that was set up under the orange and yellow tents.  They were selling a lot of locally sourced products like produce, cured meats, oil, and cheeses. 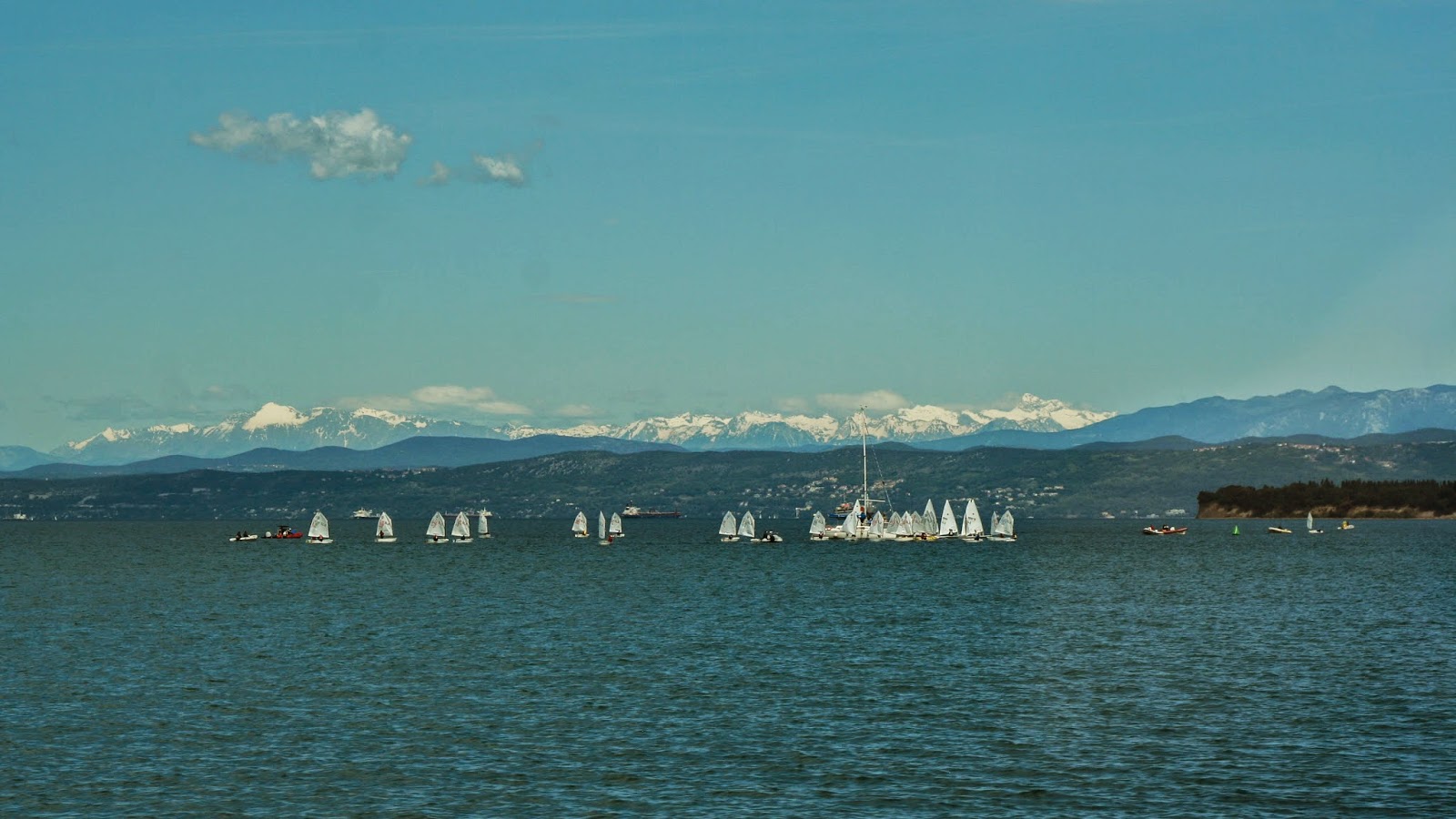 Driving out of town offered the best views of the Alps... Piran was very nice, and the surrounding area really was quite stunning.  The town itself was obviously a bit of a playground for the rich though... and the locals were not the friendliest folks, but that might just be because they are sick of the average tourist.
Posted by Drew at 10:08 PM