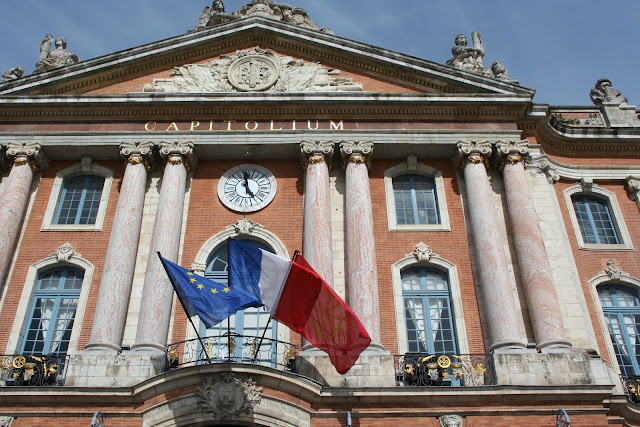 Toulouse: the heart of southwest France and a major city along the Canal du Midi, connecting the Atlantic to the Mediterranean.  France is a very regional country, and Toulouse is the capital of one of those unique regions.  The city has a very walkable city center, with everything centered around the colorful and photogenic Capitolium and its massive square. 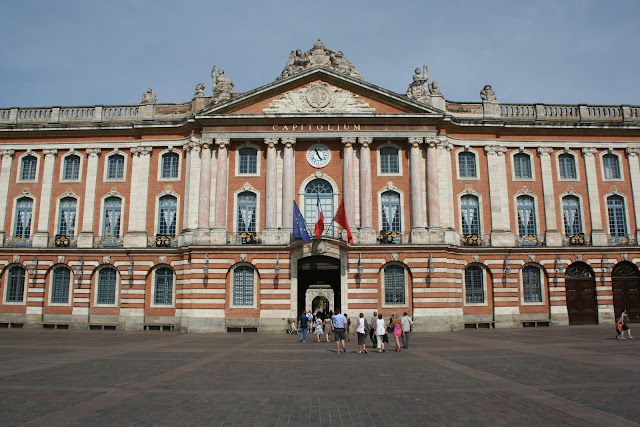 I ended up approaching the Capitolium from immediately behind it, knowing I was headed in the general direction of the main square but not that this was the capitol building itself.  I walked through it via the open, central doors seen here, and ended up popping out into the square (and the sunlight).  The square is huge, and pretty much empty (other than people).  However, it is lined by cafes and hotels and, of course, the Capitolium.  Toulouse and the region have been governed from this spot since the 12th century! 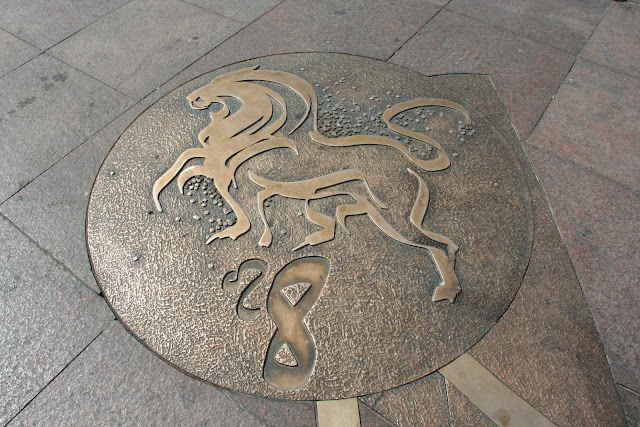 The only real decoration in the central square itself is the zodiac.  My symbol, Leo is shown here, but they do have all 12.  I'm sure Dan Brown (i.e., the author of The DaVinci Code) would have a field day with this... 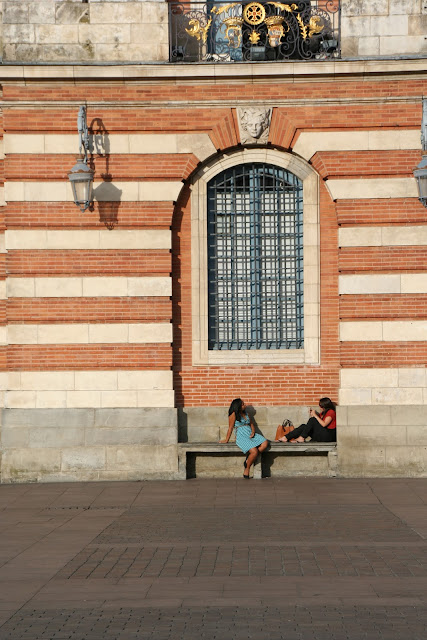 The Capitolium and central square serve as a popular meeting place.  Like those seen here, it is easy to just find one of the alcoves and let your acquaintances know at which one you are waiting.  The building really is quite lovely though, with the rosy pink brick that the city is famous for contrasted by the white-grey of the marble/stone and of course all of those classical architecture bells and whistles. 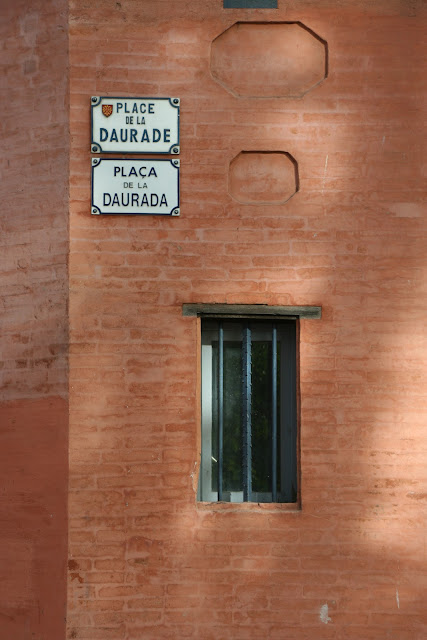 Walking around town, you will likely notice pretty quickly that signs are posted in two languages... You might be fooled into thinking that these are French and Spanish, since Toulouse lies only ~100 km or so north of the Pyrenees Mountains that form the border between France and Spain.  The second language though is actually Occitan, which is spoken along the Mediterranean coast between Southern France and Northern Italy.  The region for which Toulouse serves as capital is actually named for the language: Languedoc (think French: langue = language; d'oc = of Oc[citan]).  Many locals, being good, proud French, still speak Occitan too.  It is a romance language, descending from Latin, with its closest living relative being Catalan Spanish.  Note, this picture also features more of that pink brick, one of the reasons why Toulouse is known as the Ville Rose (pink city). 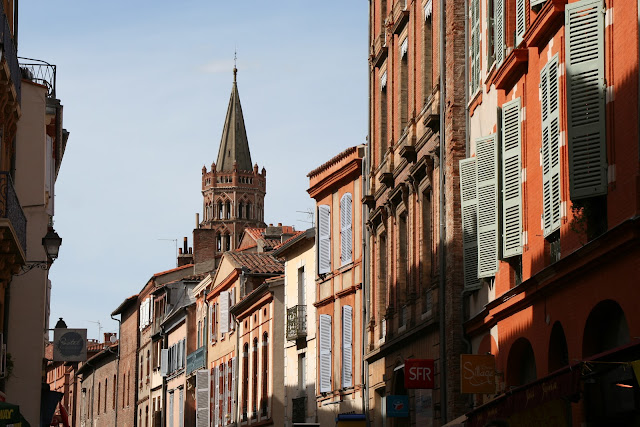 Back to the city...this is a shot of the skyline along the Rue du Taur (I think that is Road of the Bulls...but not sure since bull is taureau?).  Anyway, its a very characterful thoroughfare...the buildings are very classic French/European and there is the St. Sernin basilica tower poking up above them. 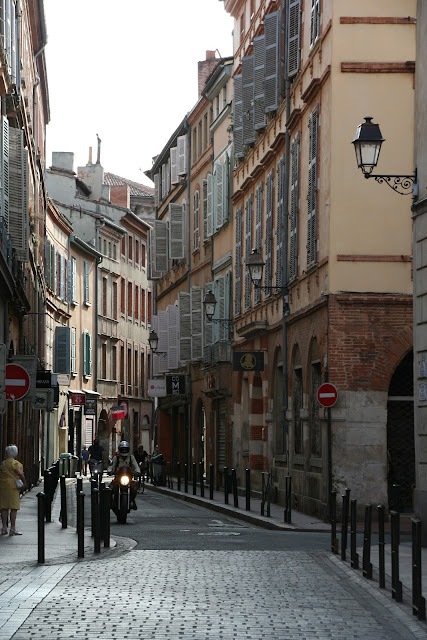 Another typical street scene in Toulouse (not along the Rue du Taur though).  It is just a remarkably pleasant town...classic example (or stereotype?) of the French city (i.e., not Paris) as far as I know.  The streets and lanes are narrow, so the center isn't very car friendly.  People were doing very well on motorcycles and mopeds though!  The lack of car traffic and manageable size also makes it great for getting around on foot. 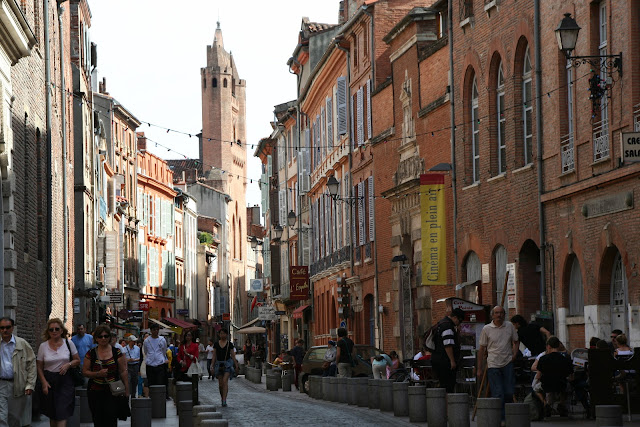 Back on the Rue du Taur, I was reminded again and again why I love France and the French culture.  The French really have mastered the art of good living... they enjoy simple, everyday pleasures and genuinely take the time to properly savor them.  Examples include: sitting on the sidewalk with friends (or alone) on a sunny morning enjoying a coffee and pastries from the local cafe; taking 2 or more hours to enjoy a delicious dinner made with locally sourced, artisan, and fresh, seasonal ingredients and fantastic wine; enjoying a picnic (with more great, artisanal, local foods and wine) with friends watching the sunset along the river.  It seems to be about what feels good now and a priority on enjoying the moment over worrying about the impacts of what has already happened or the consequences of what is to come. 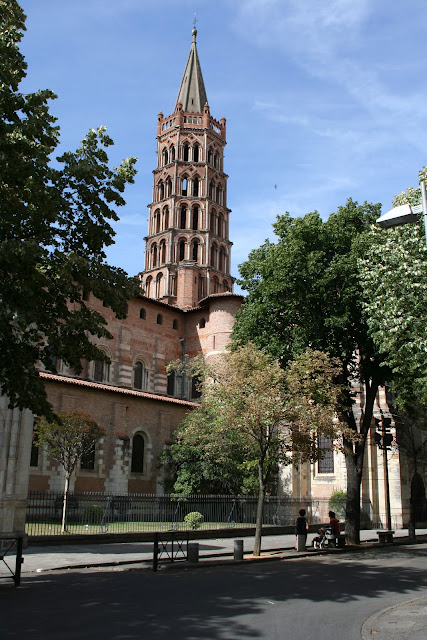 Outside of the St. Sernin basilica.  Construction started on this old church back in 1080 AD.  The ornate octagonal belfry is a really neat feature and the crypt inside is definitely worth checking out. 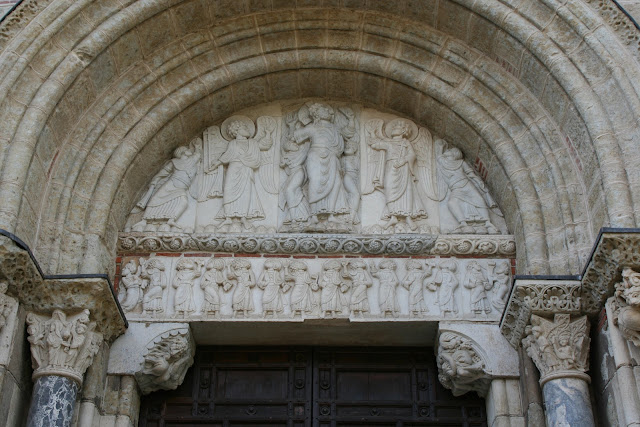 Entering the basilica from the south through the Porte Miegeville: these carvings date from the 12th century, and are supposedly responsible for launching the Toulouse school of sculpture. 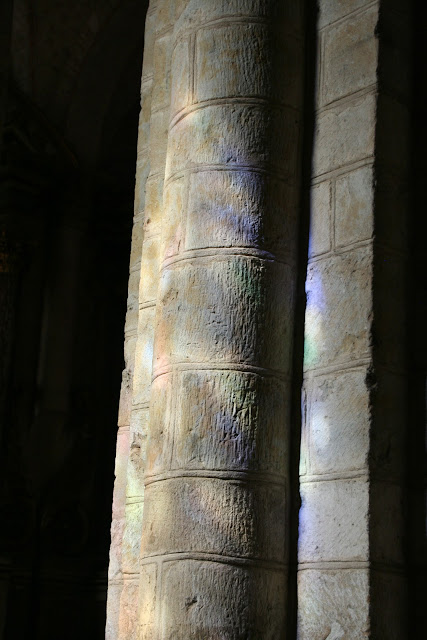 I was treated to a beautiful light show inside thanks to sunlight through the stained glass.  The colors didn't turn out nearly as vibrant in the picture, but I'm sure you get the gist. 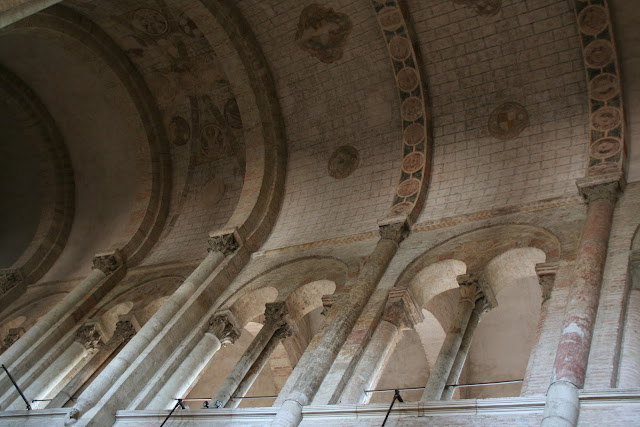 Inside, the basilica just feels ancient...it's very impressive and humbling.  I mean, just regard the stone work in the arched ceiling and consider that was done over half a millennium ago... pretty amazing. 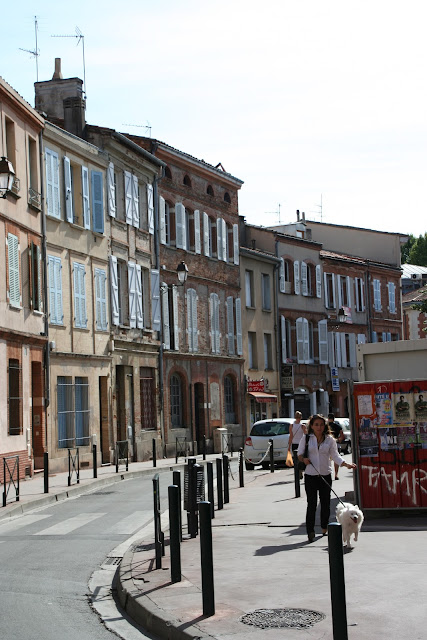 Yet another street scene... Toulouse really is quite photogenic.  It is also a student town...making the populace quite photogenic too and rendering the city with a very vibrant, youthful, and fun characteristic and atmosphere. 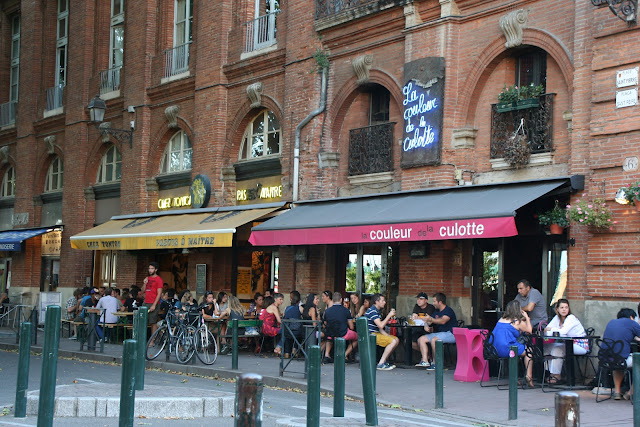 Being a student town, Toulouse also offers a great bar culture and nightlife scene.  You can get some great happy hour drink specials (like 17 small beers or pastis for 10 euro).  Pastis is everywhere... it is a liqueur made with anise, and it is normally cut with water, which when done leaves you with a sweet, licorice flavored, milky-white-clouded drink. 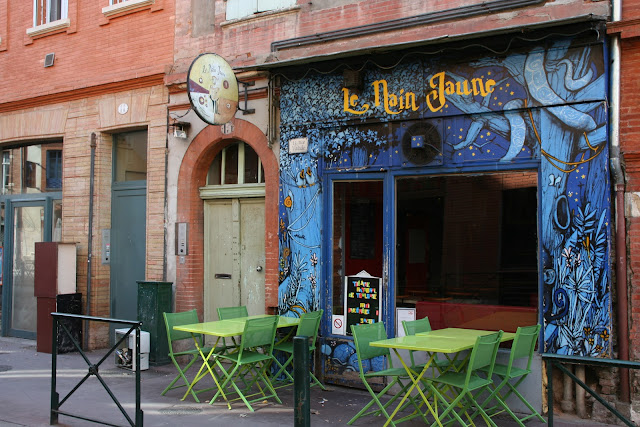 Toulouse is full of fun touches and details... like the bright green tables and chairs and painted storefront of this cafe/bar (which unfortunately was closed when I went by). 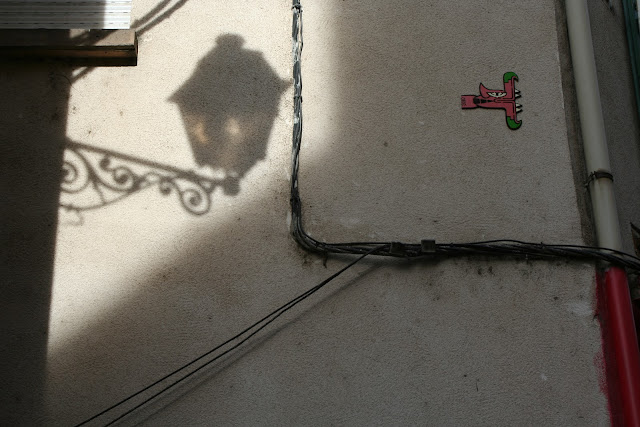 There was some very good street art too.... 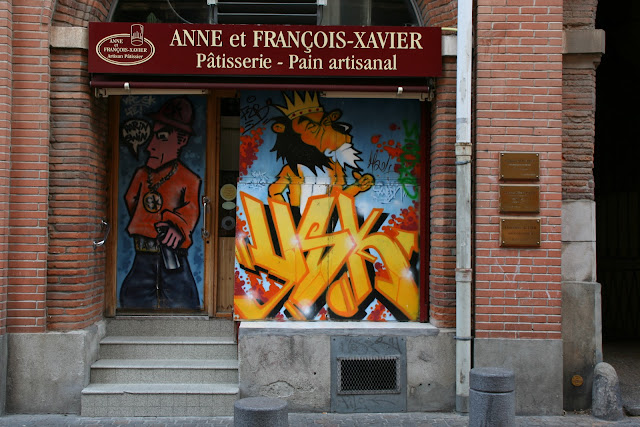 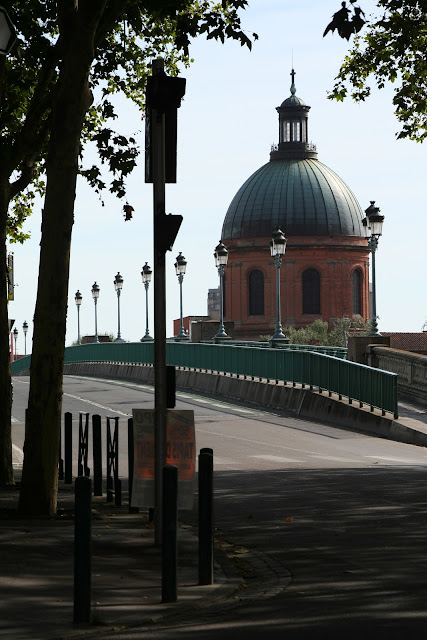 Toulouse's center is sandwhiched between the Canal du Midi and the Garonne River.  The picture above is looking at the Pont St. Pierre bridge across the river).  The canal was used as a naval route between the Atlantic and Mediterranean through only French soil (bypassing the longer route around Spain and through the foreign controlled Straight of Gibraltar).  The entire canal is tree lined (purposefully to provide shade, which slows evaporation to better maintain a constant surface level), and there are paths going alongside it on many sections between the two coasts.  In Toulouse, the city has a rental bike program, where you can pick up and drop off bikes at various, automated rental stations throughout the greater metro area (there are lots, and lots of these stations...it is incredibly convenient), and I can definitely recommending spending a couple euro to take a bike and go for a ride around town and along the canal for a morning or afternoon. 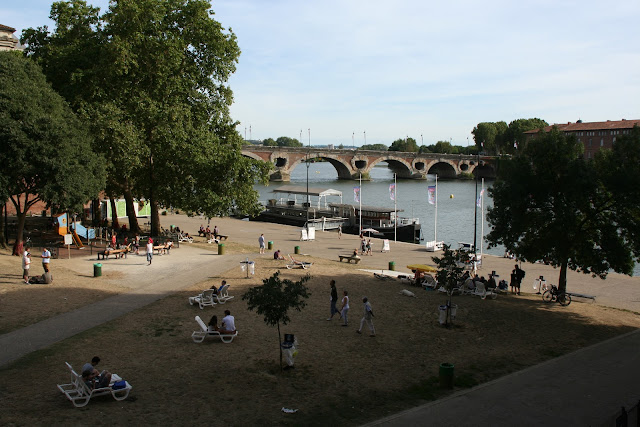 Looking down on the Quai de la Daurade, the river, and the Pont Neuf bridge.  Those white lawn chairs are apparently a feature of this little park, further supporting people to just come and lounge and enjoy the area.  At sunset, the place is pleasantly packed with groups of family and friends picnicking.  I reiterate: the French are just wonderful at enjoying life. 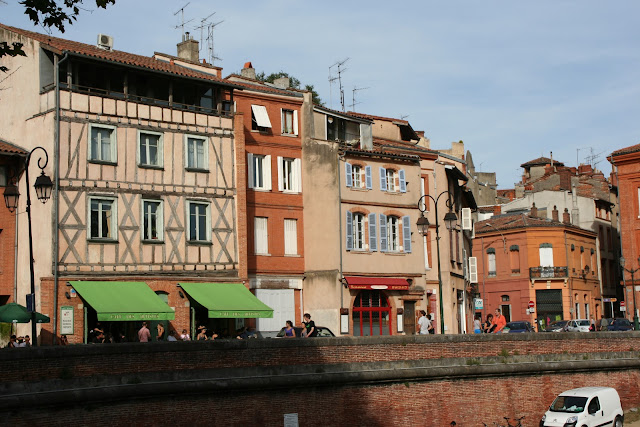 The Ville Rose glowing in the warm light of a summer sunset. 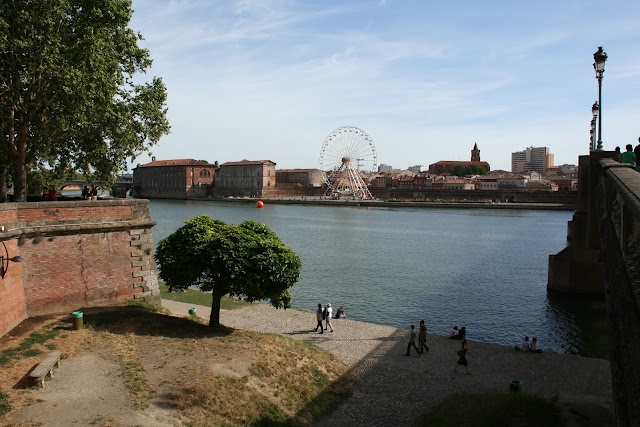 I didn't venture across the river at all... but there are supposedly some good museums and more to do/see over there.  Toulouse has been supported as a high-tech center in the French economy, so it has a very intelligent, cultured population, leaving it with a high density of things to do (museums, galleries, restaurants, cafes, parks, etc.) as a visitor... 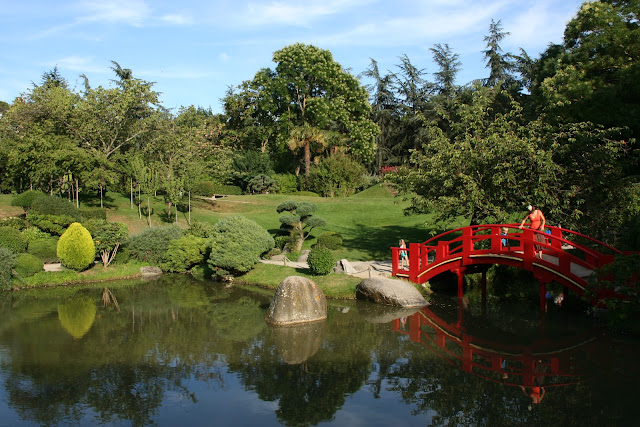 An example of one such park: Toulouse's Japanese zen garden.  Very peaceful... 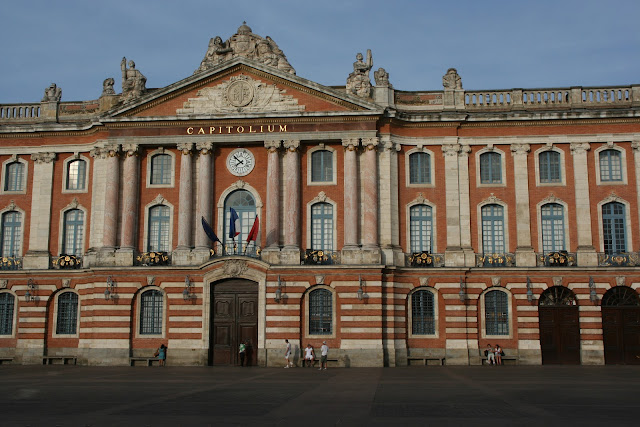 Back to the Capitolium, I started here, and I'll finish here.  This is a picture of the building at sunset.  The whole town just seemed to glow in the setting sun...it was quite beautiful.  It was great for people watching too as groups of friends met to go out for dinner and drinks and just celebrate a summer's evening together. 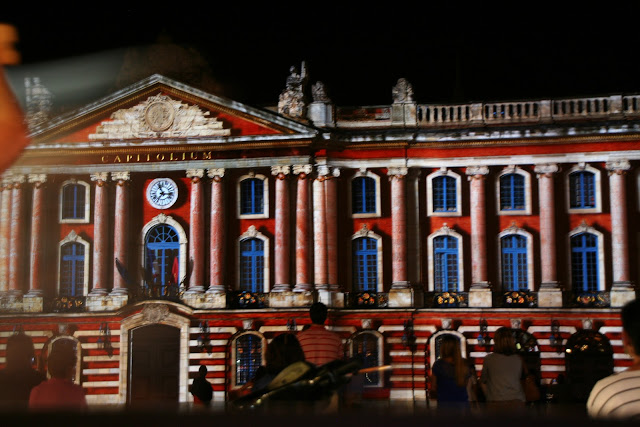 I ended up having a light dinner (cured meats, cheese, fresh bread and wine) on the main square, and I was pleasantly surprised by this light show that they did after dark.  A series of hidden projectors put on quite the show, using the Capitolium itself as the screen!  Toulouse is a great city, and definitely one that I will go out of my way to get back to.  The region offers so much (the Canal, the Pyrenees, and easy access to Spain), and Toulouse can be used as the perfect launching point to explore it. 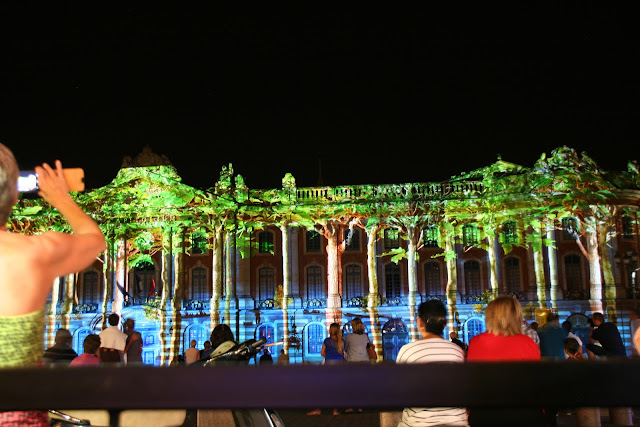