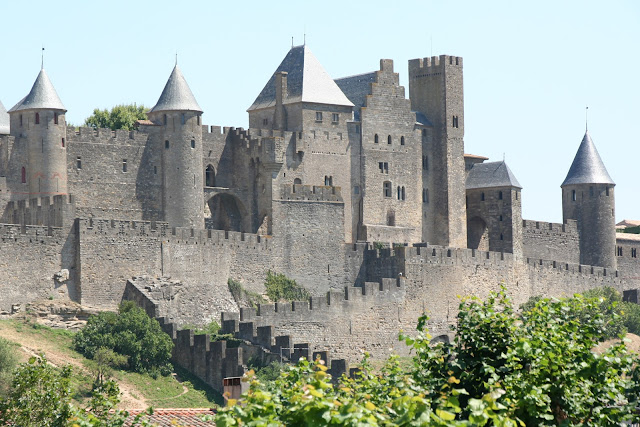 Only ~1 hour away from Toulouse by frequently running trains is the old town of Carcassonne.  This destination has been one of the topmost on my list of places to visit in France for one reason: its immaculately restored medieval castle and old town. 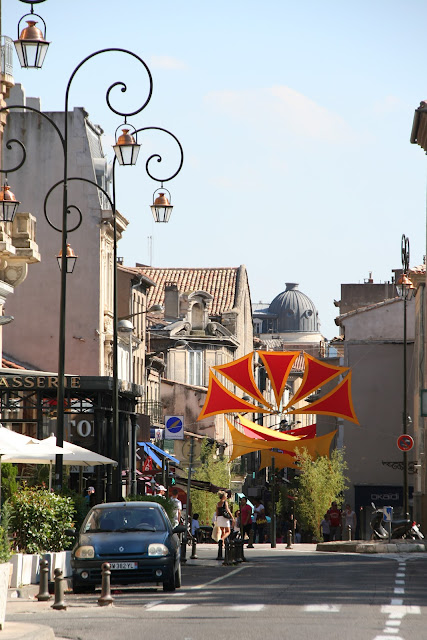 Carcassonne is split into two towns, the Ville Basse and the Cite' (this is an accented "e").  The Ville Basse is the lower town (literally "Base Town"), which is organized on either side of the Aude River, but the center of which lies across the river from the hill on which the Cite' sits.  The Cite' is the old castle and medieval town, while the Ville Basse is the modern French town shown in the picture above.  The reason for this split personality disorder is historical: Carcassonne was involved in a war against the Cathars in the early 13th century.  The Cite' was captured by forces backed by the monarchy of France in 1209, and the people of Carcassonne organized a rebellion 31 years later, which failed.  To punish the old ruling family of Carcassonne, who the king figured (most likely rightfully) was organizing the rebellious people, King Louis IX ordered that the ruling family be exiled from the Cite' and instead must live across the river.  I'm sure the court and aristocracy, and thus merchants and business, would have followed the ruling family, which is what was needed to properly establish the Ville Basse in its own way. 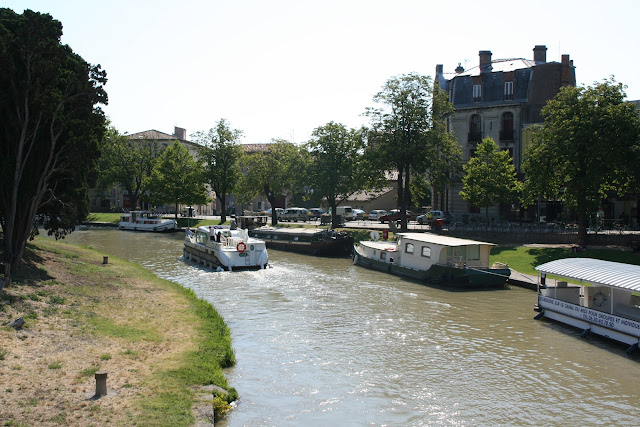 I talked about the Canal du Midi in the Toulouse post, but it also runs through Carcassonne (and is one of the first sights you'll see when leaving the train station).  There are locks in town here, allowing one to see how the canal engineers handled the gradients involved when building a canal through souther
France between the Atlantic and Mediterranean.  The locks were quite active too... several pleasure boats, packed with French who had already started their summer vacations,  were using them when I went by (there was a queue the second time!).  It's great to see that such an old waterway still has such active use. 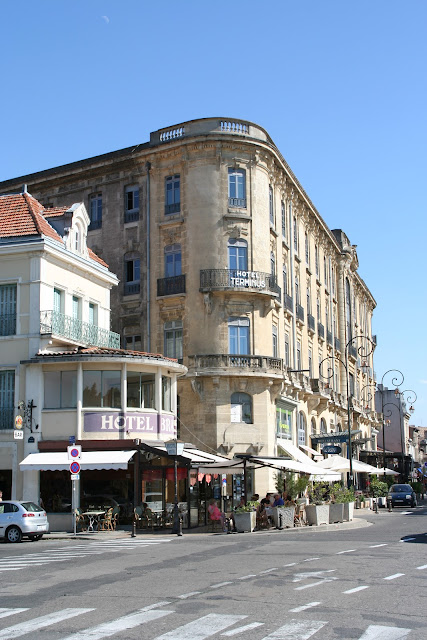 As expected for southern France, the Ville Basse is pleasant and charming. 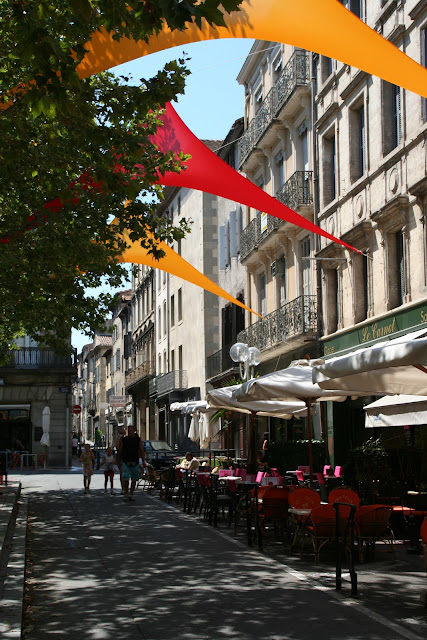 I don't know if the decorations were for the summer, or since I was there in late July, maybe they were still leftover from Bastille Day?  Though interestingly they are the Languedoc colors, not the French tri-color (blue, white, and red)... so I'm betting they were summer or permanent decorations. 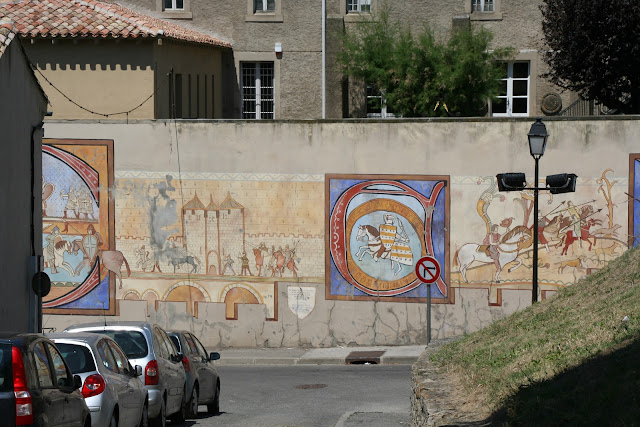 These decorations on what would otherwise be a really boring and ugly wall across the river were obviously a bit more permanent, and they foreshadowed the nature of the Cite', which I was approaching. 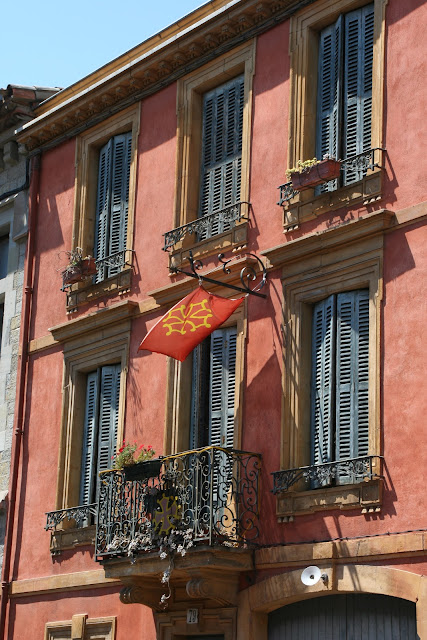 I loved this building, with the red facade and blue shutters and ironwork.  The show of Languedoc pride, with the flag prominently displayed was just icing on the cake.  Languedoc pride was obviously pretty common though; the flag and colors were all over town. 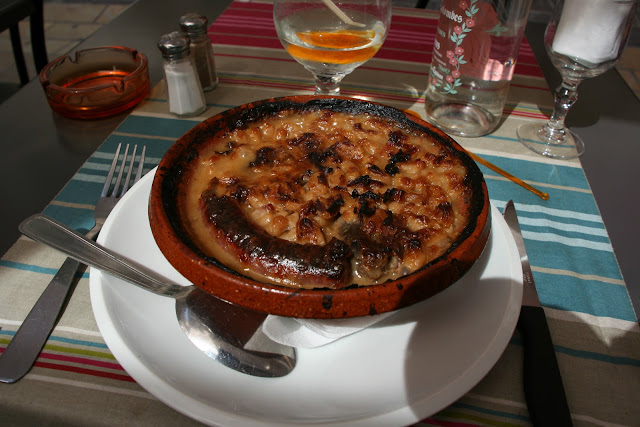 This was a massive highlight.  Despite being a blisteringly hot July afternoon, I decided to do the tourist thing and try the local, Languedoc food speciality: a piping hot dish of thick and hearty Cassoulet.  Cassoulet consists of navy beans, sausage, and a goose leg baked in an earthenware dish.  Sounds basic (it definitely derives from peasant food... but some of the best stuff does), but it was incredibly delicious and lived up to its hearty and warm reputation.  It was so worth the sweat from the combined heat of the dish and the air; the dish was seasoned perfectly and the gravy that formed from the beans and meats was just so savory and rich.  I even ended up scraping the bowl... highly recommended you try this if you're ever in the region (the experience is probably heightened to near perfection in the colder months too!). 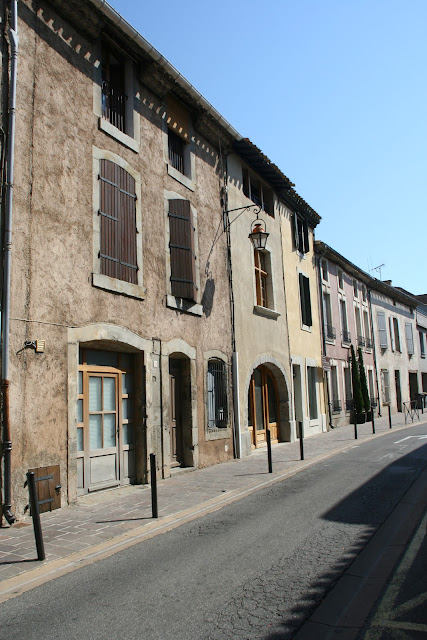 A row of buildings on the way up to the Cite'.  You can tell the Ville Basse is old... the medieval arches that would have framed old shop fronts are still there on many of the structures, revealing their age. 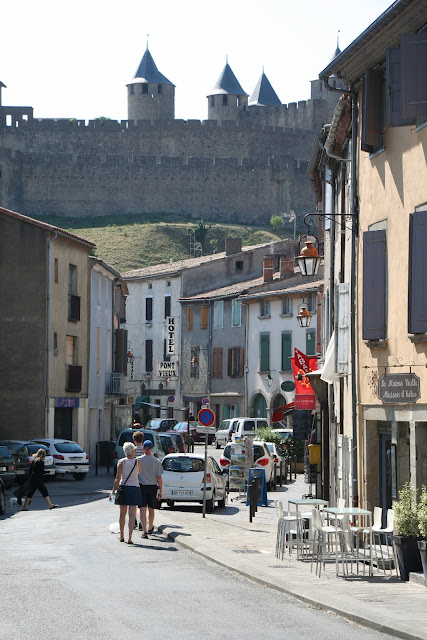 Getting a glimpse of the Cite' on its hill above town.  It's pretty bizarre and definitely invokes a feeling of some unnatural collision or melding of different times.  You look on the street level and think, ok, I'm in a modern French town, but look to the distance and see that castle on the hill and you immediately feel transported to the Middle Ages, expecting knights on horseback parading by, plenty of peasants working the fields and going about their business, sombre-chanting or jolly-drunken tonsure monks, blacksmiths with their anvils ringing, and maybe even a "bring out your dead" cart! 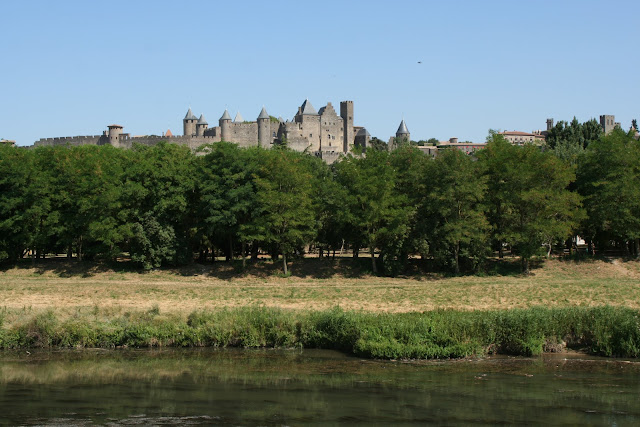 Seriously, I mean this picture could have been taken in 1400 (if cameras existed back then) just as easily as today.  As a medieval buff, visiting Carcassonne was like unleashing my stick-sword wielding inner-child.  It was exciting and invigorating to let my imagination run wild in such a place.  It's kind of sad actually, when you think that mentally escaping to a different time and place are easy for a 10 year old to embrace on a castle-themed wooden jungle gym in their local park, but it takes an outright castle in its original setting to do the same in an adult.  The castle is amazing though; it's no wonder why it is the setting for many modern day movies and productions, including parts of Robin Hood: Prince of Thieves.  The Cite was restored from ruins by the architect, Viollet le Duc, in the 1844 and is now a UNESCO World Heritage Site.  Apparently, there is an ongoing debate that the restoration was "too perfect", but it's obviously considered a success to most (and the town too... it is entirely responsible for making Carcassonne a major destination on the tourist map of France). 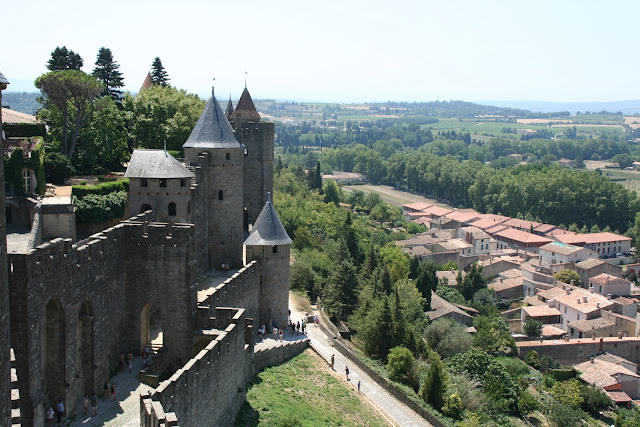 Entrance to the Cite' is free.  You can walk unhindered (if not for the throngs of loitering tourists) through one of the several outer wall gates and into the old city.  the only thing you need to pay admission to is the inner keep (more on that below).  The countryside around Carcassonne is very pleasant too, with woods and farmers' fields and rolling hills.  It was apparently sunflower season while I was there too; the train ride was stunningly beautiful, with enormous brilliant yellow fields of the flowers glowing in the sun. 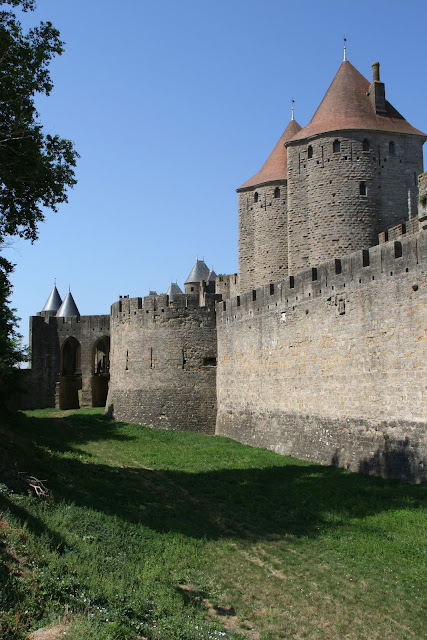 A view along part of the outer wall and defensive trench (maybe an old moat?) around it.  You can see how a full frontal attack against such a defensive position would be foolhardy, which is why the preferred tactics were either 1) sneaking in with a small, elite force (via tunnels, deceit, or scaling the walls) and launching a quick, stealthy mission to open one of the gates to your waiting army (if you are pressed for time); or 2) fully encircling the castle, cutting off its supply chain and waiting until those inside are starved enough to surrender (if time is not an issue). 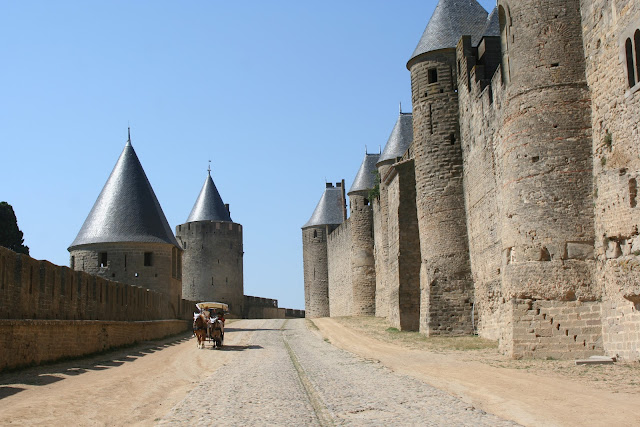 The inner wall: Carcassonne was a double walled fortress town.  No two gates line up between the inner and outer walls, forcing any attacking army to navigate this inner killing-zone area before sieging the inner gates for access into the city. 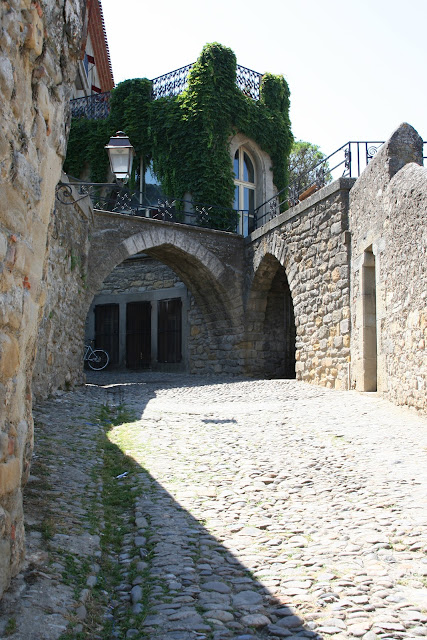 Once inside the inner walls, you are officially in the Cite'.  It is as if you stepped back in time, apart from the throngs of tourists and odd reminders of the modern world (like glass, lanterns, bicycles, etc.). Step into an alley or side street and it isn't too hard to escape the crowds though.  As with anywhere that is frequented by tourists, most people are statistical... they stay within a pretty close standard deviation of the mean, which is of course focussed on the main thoroughfares and sights.  So, being an outlier isn't too difficult if you only put your mind to it. 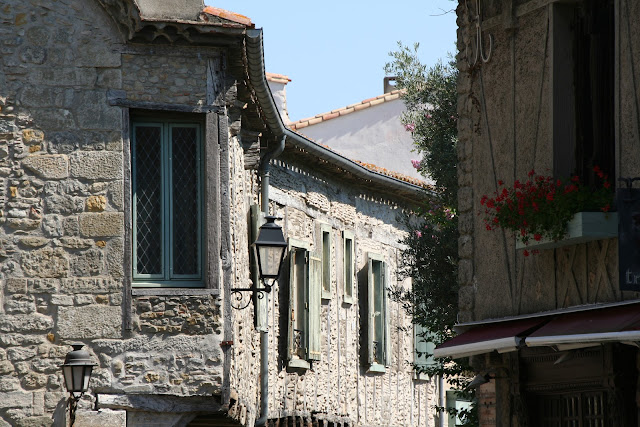 The Cite' is amazingly pleasant and restored.  Though you'll notice many of my shots are up above street level... this is because of the incredible amount of people there.  It was crowded, but that should be expected in such a place on a warm, clear summer day. 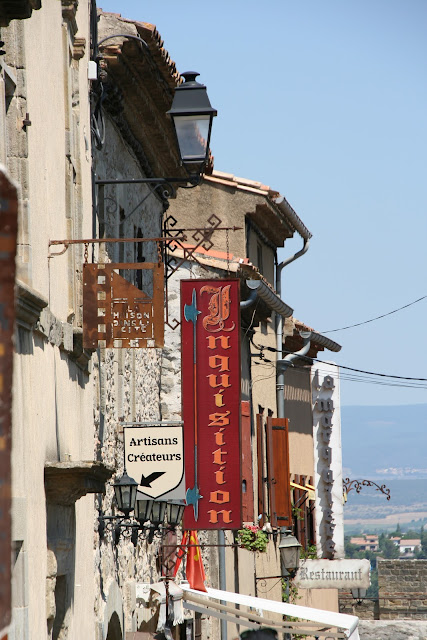 At times (and in places), the Cite' felt a bit too Disney-Landish for my own taste... there are lots of Renaissance Fair type places and aspects.  Still, at least everything seems to be pretty local and home-grown (very much unlike Disney). 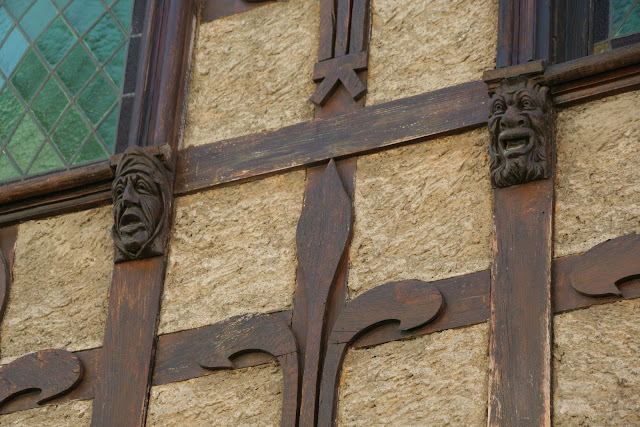 Overall, Carcassonne is still pretty charming though, and it's not hard to get a spot at a cafe in the Place Marcou or Place du Grand Puits and just relax a bit and take in your surroundings.  It's also pretty easy to find a nice spot to yourself on the ramparts, which are open and accessible to the public (amazingly so since there are no handrails and some pretty dangerous heights... gotta love European common sense and lack of American lawyers). 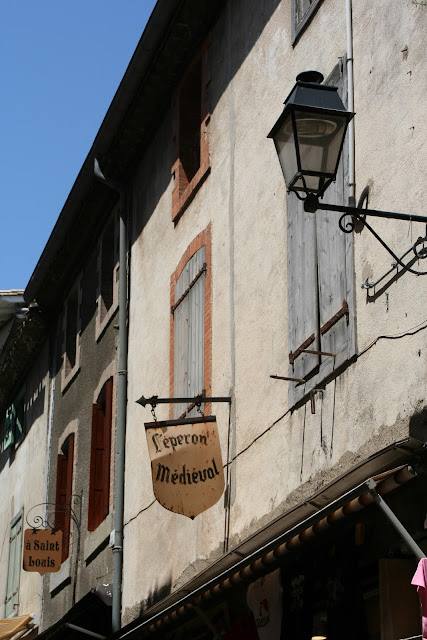 All of the shops in the Cite' are touristy.  Don't expect to find any deals here.  Though there are some good little souvenirs if you're looking for such things.  Also, I'd very much recommend eating down in the Ville Basse instead of the Cite'.  The prices (and probably quality too) are much more reasonable below, and you shouldn't need to fight or wait long for a table. 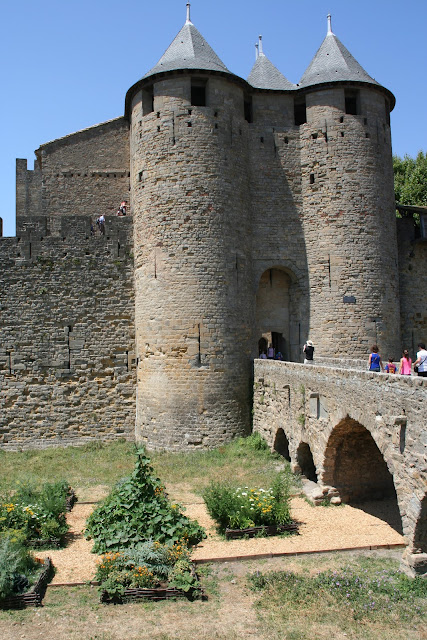 The inner castle; a citadel within the fortified town.  The whole town could fall back inside the citadel if the outer and inner walls were compromised by an attacking force.  The attackers then had another set of walls to breach and even more defensive tricks to tackle. 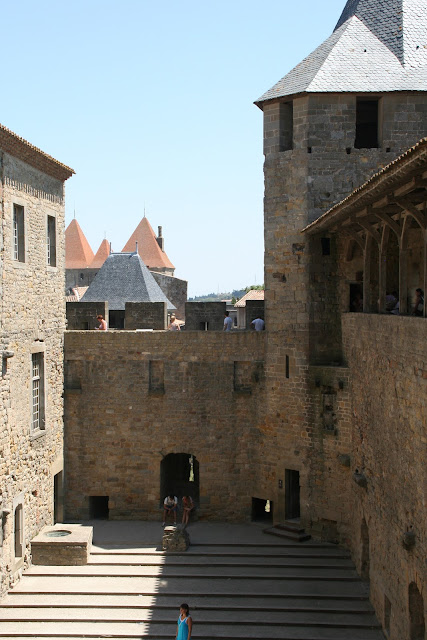 You have to pay to wander around the chateau (castle), but it's definitely worth it, if only for the views from the towers alone. 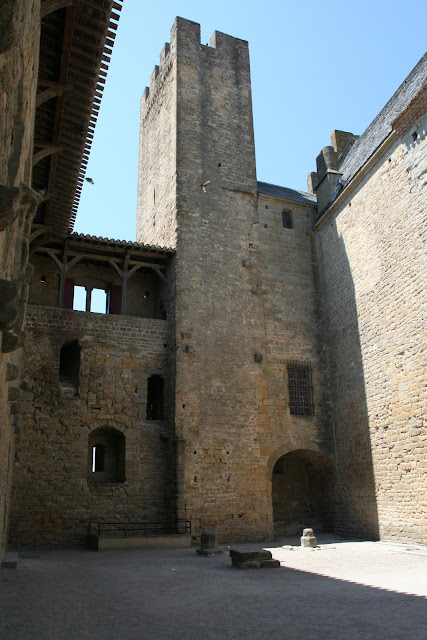 It's also another good place to escape the crowds. 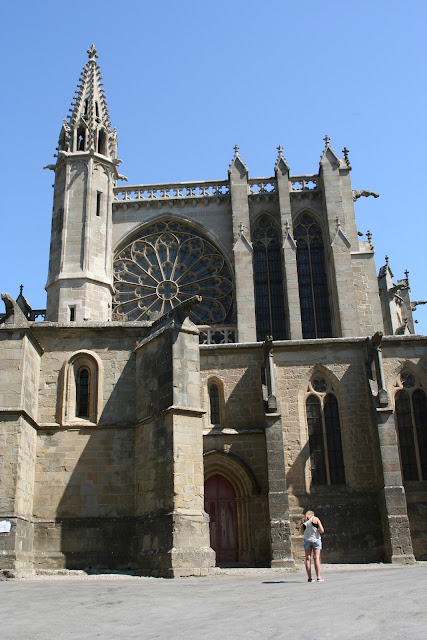 The other main building in the Cite' is the church of St. Nazaire.  It's a beautiful old building with a very unusual sense of organization (or lack there of), with no real symmetry in its form.  For example, look at how the main door is tucked away here.  It seems as though it was constructed pretty ad hoc, having to fit into tightly spaced buildings around it. 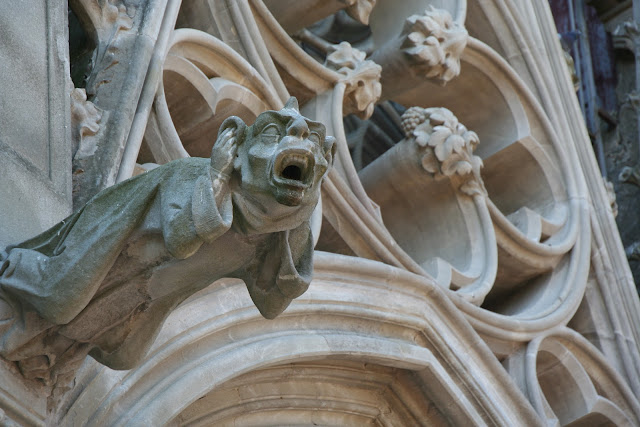 The restored church has some beautiful details, like these gargoyles, stone-work, and stained-glass windows. 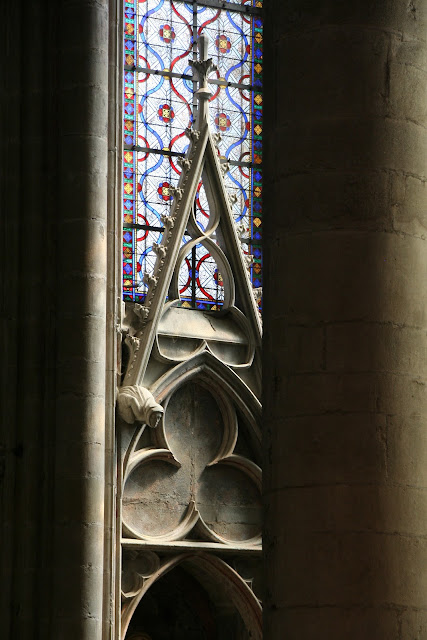 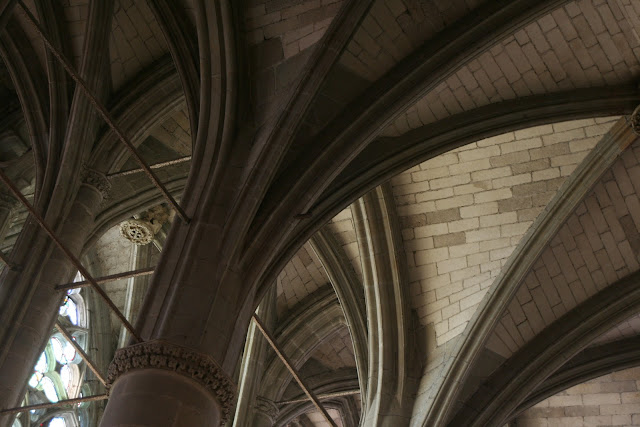 As usual, the engineer in me just can resist a shot of the vaulting, even if it is being reinforced with those steel rods now. 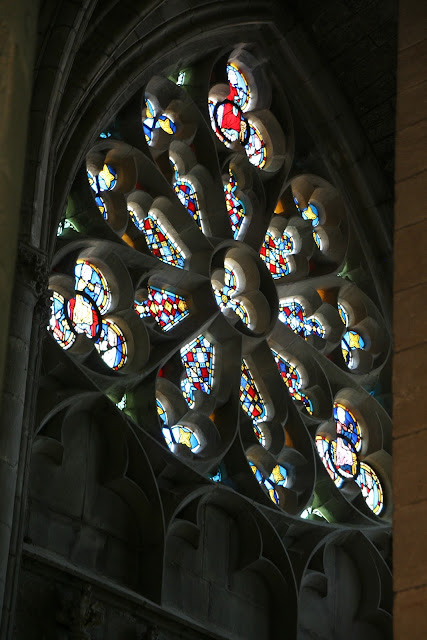 I was fortunate to be treated to a light show in the church too.  St. Nazaire is a little gem in the Cite; it's peaceful and beautiful... a great place to calm and cool down and reflect on the day or whatever else you have in mind. 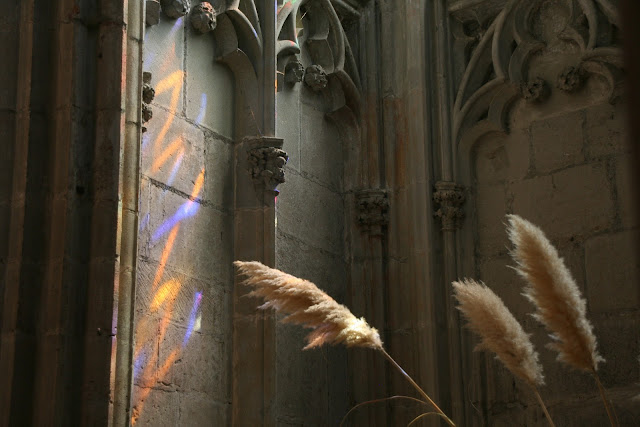