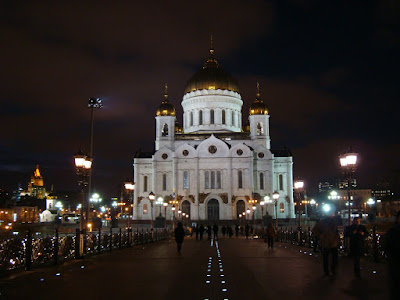 This is going to be a picture heavy post, since I've already devoted a good post for Moscow.  I was back in the capital of Russia for a meeting in November...a stark contrast to July in many ways.  It was colder, though not terribly cold, but the most noticeable thing was the length of the day...it was very, very short.  This is the Cathedral of Christ the Savior.  Stalin actually tore down the original cathedral here to build his seventh, and grandest skyscraper, the Palace of the Soviets.  However, this 1000+ foot high building never got off the ground, as the soil was supposedly too soft being so close to the river.  Instead, the Soviets converted the massive foundation that had been dug into a massive public swimming pool.  However, when the Soviet era ended, the government built this new cathedral to replace the one that Stalin tore down. 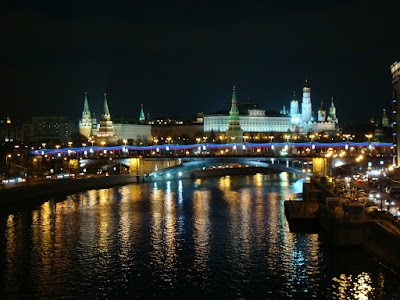 The Kremlin and Moscow River by night.  It really is a beautiful city, and it is very obvious that the Muscovites are experiencing an economic upswing.  There were more Mercedes, BMWs, Audis, and Astons here in Moscow than in Los Angeles. 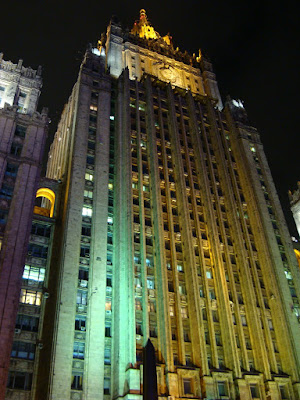 One of the six Stalin Skyscrapers that are so characteristic of the city...I believe this one is now the Foreign Ministry...pretty cool. 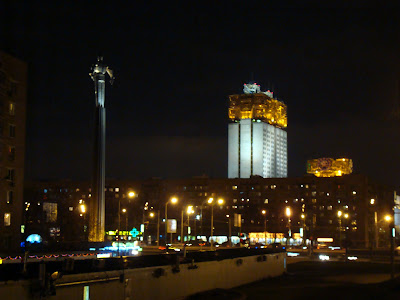 The "Brains" buildings (background) and epic monument to Yuri Gagarin (foreground left).  Gagarin has surpassed hero status and is something more of a demi-god in Russia.  He has even coined the new informal, yet popular, way to say cheers when drinking with his first words from space (or before liftoff?): Поехали (pa-YEH-a-li), which means "let's go" 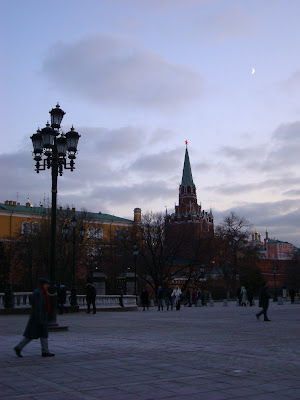 The Kremlin and the Moon at sunset 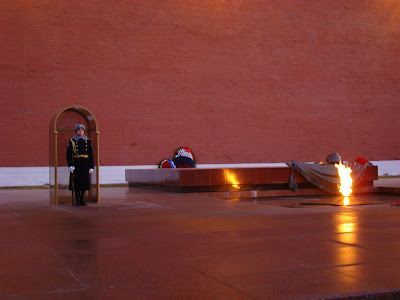 You can compare the uniform of the guard at the Tomb of the Unknown Soldier with that form my July trip...quite different and oh so much more Russian looking in Winter form. 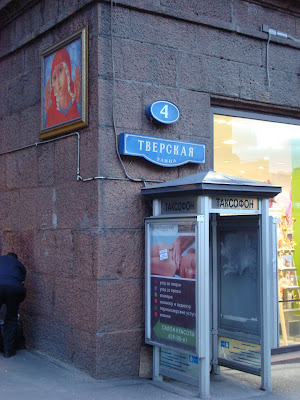 Like St. Petersburg, Moscow also has replicas of art hung in random places around the city...this one shown adjacent to the taksofon (pay telephone) booth.  The art is a nice touch I think. 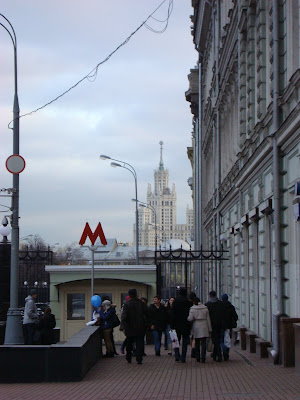 The famous Moscow Metro and another of the Soviet skyscrapers in the background. 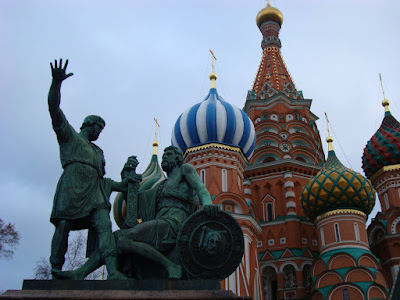 On this trip, I was actually able to get up close and personal with St. Basil's Cathedral.  I was lucky too as it had just been renovated for it's anniversary. 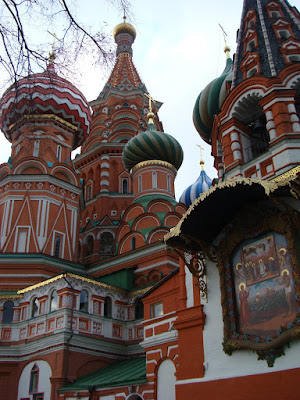 It's an absolutely beautiful building...the architects went wild with the detail and intricacy. 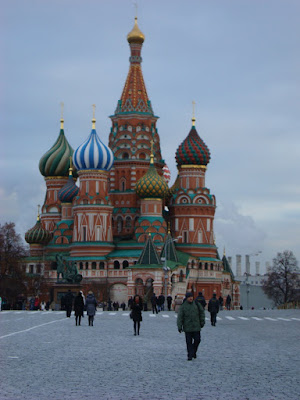 The cathedral seen from across Red Square. 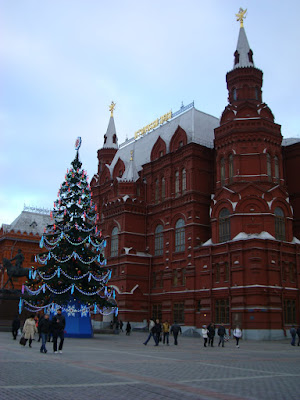 Being the end of November, it was almost Christmas season, and the city was decorated as such... 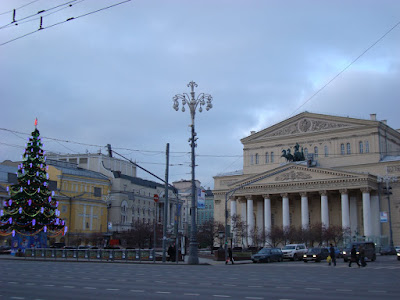 Another Christmas tree outside the Bolshoy Theater... 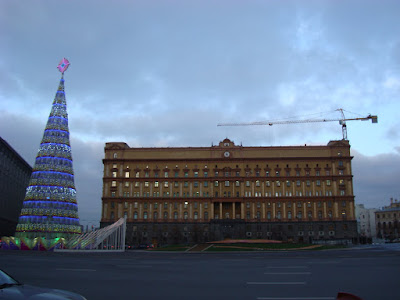 And another in...wait...Lubyanka Square...oh that's just not right.  The Lubyanka Building (seen here in the background) was the former home of the KGB and is the current home of the Russian Federal Security Service, a federal police force similar to, but with much more power and right to invade personal privacy than the FBI or Royal Canadian Mounted Police (i.e., Mounties). 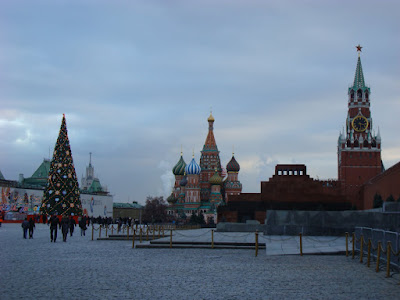 And of course, the Christmas Tree in Red Square...wait, wait...right in front of Lenin's Tomb.  OK...someone has got to reconsider these things...I mean the man was fundamentally communist...you know, one of the founding philosophers behind Marxist-Leninist atheism?  Does anyone else find this a little disrespectful, or maybe ironic... 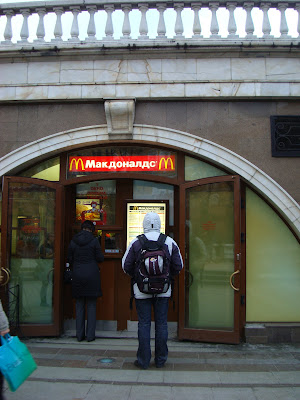 Speaking of irony concerning former Soviet Russia...here is a picture of the Red Square Mc Donalds...just a conveniently short stroll from Lenin's Tomb. 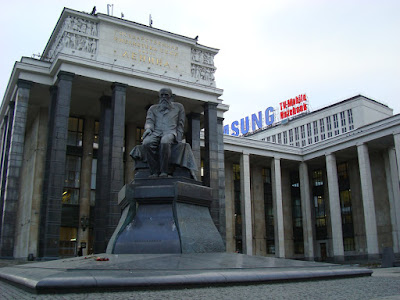 And Lenin's Library...with a massive Samsung advertisement in the background (which is lit up brilliantly with florescent lights at night too)... enough said I guess.  Modern Moscow is definitely a different place. 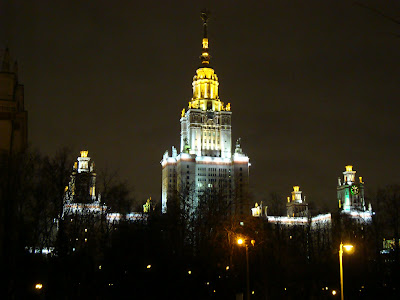 Finally, the sixth Stalin Skyscraper...and the largest of the existing buildings: Moscow State University.  Much of the University is housed within this building, including classrooms and student dorms! 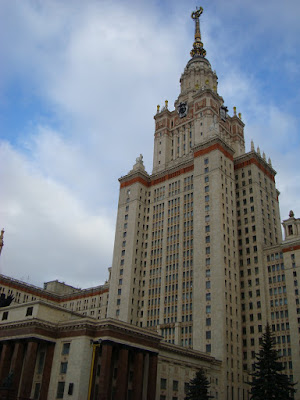 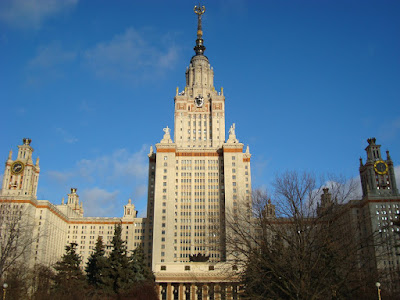 Overall, Moscow by winter (OK, technically late fall...but close enough...I saw snow and it dropped to -15 deg C overnight) was pretty beautiful actually.  The city center is spectacular by night (and the nights are long during that time of the year) and they do a nice job decking it out for the holidays.  On a bit of a sadder, political note: Russia was also ramping up for elections when I was there, and I had an interesting conversation about the current state of affairs.  Basically, Putin's party dominated the campaign adds and posters/billboards (they were everywhere, on buses, benches, street lamps, and buildings, and practically nothing visible from any opposition), and despite there being legitimate opponents, it was well recognized and frustratingly accepted that no matter how people actually voted, Putin and his party would remain in control.  Moscow is an interesting place, and I look forward to returning...though on my next trip to Russia, I'll definitely have to get out of it's two big cities and see more of the actual country itself.