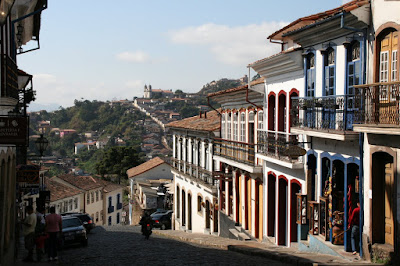 After an overnight, bouncy, and twisty bus journey north of Rio, I arrived early morning in Ouro Preto, which translates to Black Gold. This place is an old, old town in the state of Minas Gerais. I spent only a couple days here, but that was enough to wander around the historic city center, get a feel for the place, and eat some awesome Minas cuisine! 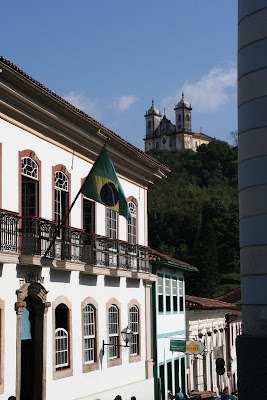 Ouro has a ton of Boroque churches, which is part of the reason it was designated a Unesco World Heritage Site. As you should know by now if you follow this blog, I love historic, well-preserved old cities, and Ouro Preto definitely fits this bill. As an added bonus, it is surrounded by these incredible mountains, and the town itself is built on very hilly terrain, which offers spectacular views over different parts of the city as you wander around its twisty cobbled streets. 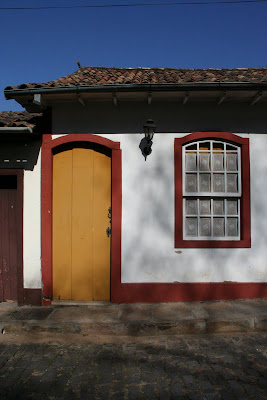 Like Paraty, the place has been really well preserved, and the locals maintain everything just wonderfully. 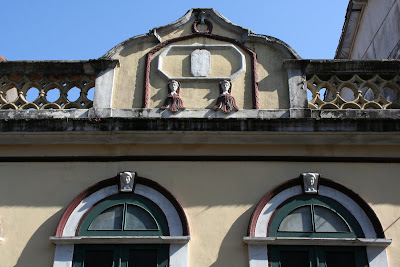 Why don't we have detail like this on buildings anymore? 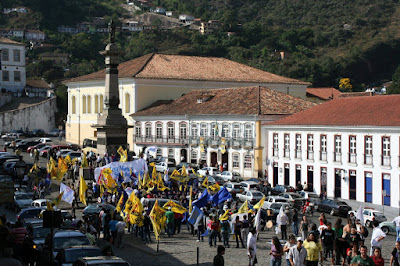 Ouro Preto is a town steeped in history, and it holds a special place in the financial and political history of Brazil. It was in Ouro Preto that the Inconfidencia Mineira revolution was attempted in 1789. The attempt was the result of Portuguese colonial rule over Brazil and the increased demand of gold from Ouro Preto's mines. The political elite organized the revolt, but it was quelled and the leaders executed. The statue, seen in the middle of the town square and political rally in the picture above, is of Tiradentes, one of the most prominent leaders of the attempted revolt, and the main building on the square now houses a museum devoted to Ouro Preto's history with a lot covering the attempted revolt. Even Minas Gerais' state flag (seen below) reflects this history; the words "Libertas quae sera tamen" was the motto of the Inconfidencia. It translates to "Freedom albeit late." 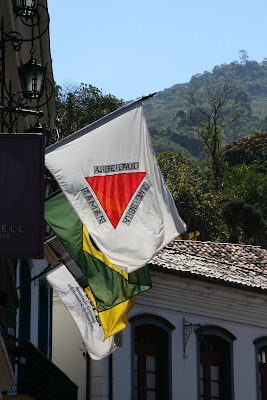 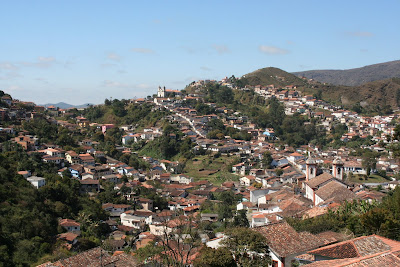 One of those sweeping views from around town. You can see the churches sticking up above the other buildings. 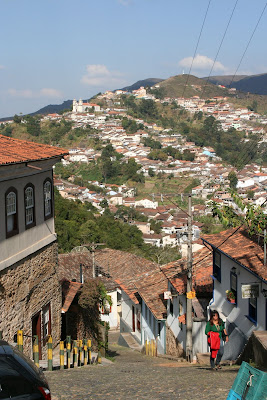 You definitely burn some calories wandering around town. The hills it is built on are steep, but they didn't stop the cities architects and contractors. 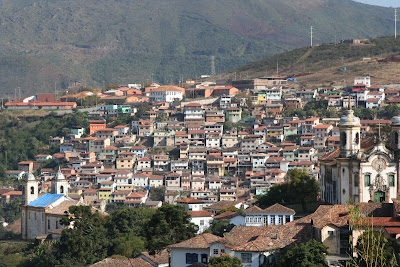 There are favelas clinging to the hills here too...many of these serve as the homes of local miners and their families. In the local hills and mountains, the dominant resource is aluminum, but other stones, metals, and minerals are still mined too including iron, bauxite, manganese, talcum, marble, gold, hematite, dolomite, tourmaline, pyrite, muscovite, topaz and imperial topaz, which is unique to the area. This wealth of minerals is very evident in the multitude of gem shops around town and even peddlers offering discounted, uncut gems on the street. It's unfortunate that this wealth isn't more evenly distributed amongst the workers; there is an enormous difference between these favela dwellings and some of the more expensive ones around town. 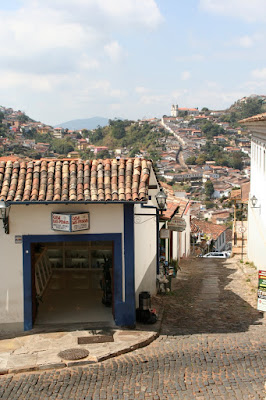 A neat thing about Ouro Preto is that the town is still very much lived in. Despite heavy dependence on tourism and even more so than Paraty, the place has not at all been ruined or made fake by over-catering to tourists. 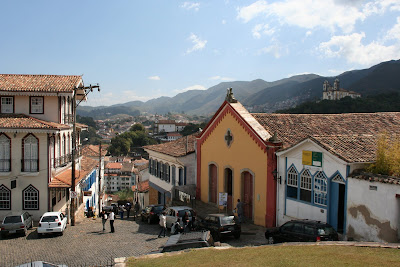 Just another typical view of town. 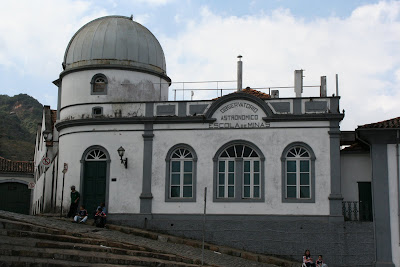 The observatory at the old School of Mines. Ouro Preto is also a university town (the Federal University of Ouro Preto is here), which is another bonus point in my books. 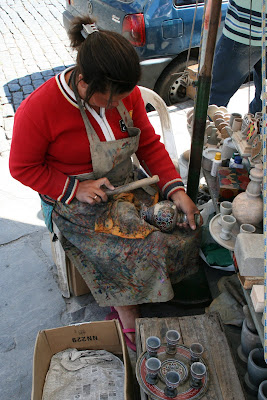 You can get some INCREDIBLE handmade stoneware in the markets in Ouro Preto, and the stuff is really well-priced. I got a couple hand carved and painted stone candlesticks for only US$4.50 and a stone shot glass for US$1! The carvings are intricate, and you can see people doing the work right in front of you (picture above). Then they use those wonderful bright colors to paint the pieces...really a great deal. As with most street markets, just remember to politely and respectfully haggle, or run the risk of being taken advantage of! 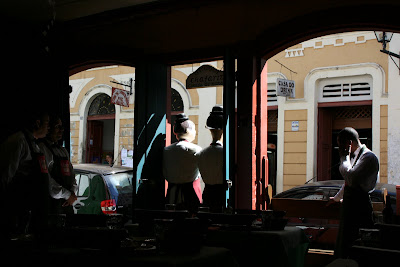 Awesome restaurant... Minas is known nationwide for its cuisine. When I told Brazilians I met along the way that I was headed into the state, all of them told me to make sure I enjoy the food. That was another great thing about Brazil in general; we met some really nice and friendly people. Missy wasn't with me in Ouro Preto, and I was approached by several people about our age just wondering where I was from and what I was doing in Brazil. They were beyond friendly and after nothing but a little practice with their English (which was really good for the most part!) and to make a new, foreign friend. I have more notes in my guide book from these meetings as these new friends pointed out their favorite places around the country, and I even collected some email addresses of those who offered places for Missy and I to stay around the country when we return in 2014 for the World Cup! 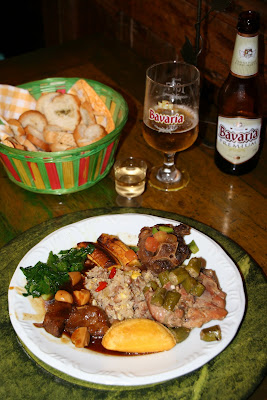 One of my plate-fulls of amazing food at Chaferez...my favorite of the local restaurants. Buffet style meals are popular in Brazil, and this one was incredible. They also had unlimited cachaca, the Brazilian spirit distilled from sugar and similar to a strong rum (seen in the small shot glass next to the beer). Brazilians take their cachaca seriously too, and Paraty had entire cachaceria's devoted just to the beverage! Each region is known for its different styles of it, and the amazing caipirinha drink is made using it (along with fresh lime juice and sugar...delicious!). 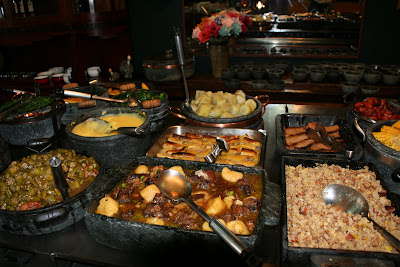 Minas food is very savory, salty, and stew-like. Rice and bread serve as the major starches and for sopping up the various sauces. As is the norm in Brazil, there are lots of meat dishes...lamb, beef, pork, and poultry. This is just part of the spread from Chaferez; it was absolutely delicious and served all you can eat! I stuffed myself there. 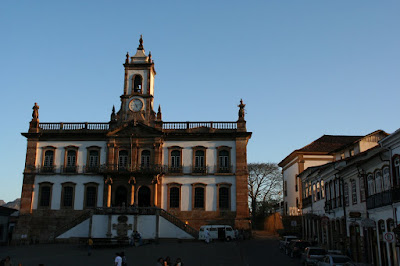 The museum is located in this old building on the city's main square. I'd recommend a visit...they have a lot of really neat stuff in there and many of the displays and interactive exhibits have English translations. 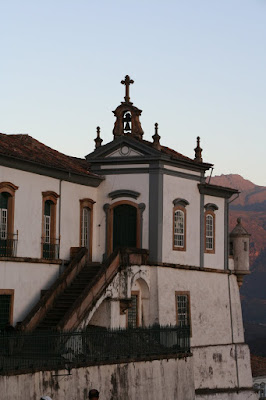 You just get this incredible feel walking around the place...like you are in another time. Also, I felt extremely safe here... I was alone the whole time and wandered around much of the city without any problems. 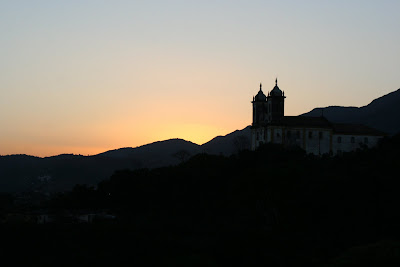 Sunset over Ouro Preto, with one of its famous Baroque cathedrals in silhouette.
Posted by Drew at 3:11 PM

It is very important to have good thoughts in mind to write a beautiful post and your mind seems very clear only then you have written such a beautiful post, it is worth praising on this post, the amount of praise this post will be less.
gurugram phase 5 escorts
Palam Vihar Escort Servcie
Call Girls in Indirapuram
Sushant Lok Escorts Girls

Your article is very good and very different. Your post will be very useful for me because I like these articles very much, I am thankful that I found this post.
Rent Call Girls In Gurugram
Rent Escorts Service
Call Girls Golf Course Road
Escorts Service Aerocity
Call Girls Huda City Center
Call Girls Sector 29
<a href="https://girlsrent.in/M.G.R

The comment is good, there are some people in the world who do something. But the one who walks with everyone is a good person, really your post is very good and very unique thanx
Call Girls Sector 15
Vip Escorts Service Sector 50
Call Girls In Gurugram
Gurugram Escorts Service
Independent Escorts Bhiwadi
Dlf phese 1 Escorts Service
Call Girls Jharkhand
Call Girls sector 24
Gurugram Call Girls

Escort girls in Delhi make independent Brahma; Delhi call girls are always ready to serve you for interested people. Call girls in Delhi have been placed in many categories. Surely we are available according to you, you can come on our website and contact us. Female Escort In Delhi

Welcome to Gurgaon Escort Service. We provide one to one sexiest girls and provide cheap service rates. You can visit our website to take advantage of the service. Cheap Escort Service In Gurgaon

Most valuable and fantastic blog I really appreciate your work which you have done about the electricians,many thanks and keep it up. Very useful info. Hope to see more posts soon! I really like to read this post, it shares lots of information to readers.a