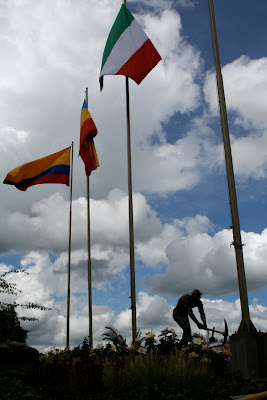 On our last day in Bogota, we decided to do a day trip out to Zipaquira, just around 50 km north of the city center. We took public transport up to the Bogota North bus depot and then a minibus out to the small town. Bogota has a pretty good public bus system, which is run like an above-ground subway along the city's major roads; the buses have their very own lanes that are totally separated from the rest of traffic! Anyway, it was no problem getting out there, and we got our first glimpse of the countryside outside of the city. I cannot stress enough how beautiful of a country Colombia is! With it's mountains, coasts (Colombia is the only South American country with both a Caribbean and Pacific coast), and location in the tropics just north of the equator, Colombia provides a wide range of landscapes, many of which are hilly/mountainous with plenty of trees and vegetation that paint the terrain with brilliant shades of vibrant green. Anyway, Zipa is an old mining town, famous for it's salt mines, which still produce a massive amount of Colombia's salt. 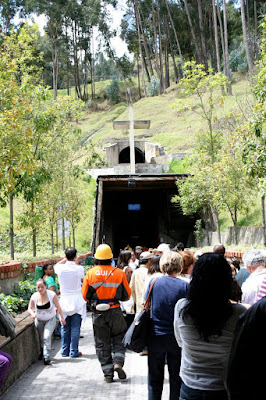 Despite a pretty cool, clean little town with lots and lots of great choices for eating (famous for the local form of barbeque, which is cooked slowly over very big, open, wood fires), the salt mines of Zipaquira draw tourists from around Colombia to see the Catedral de Sal (Salt Cathedral), which was carved out of the salt and rock by miners. There were A LOT of people there, and I think we were the only native English speakers out of the bunch! The picture above shows the entrance into the mines, where visitors go into the mountain and travel down a long, dark tunnel carved out of the salty rock into the depths below the mountain. 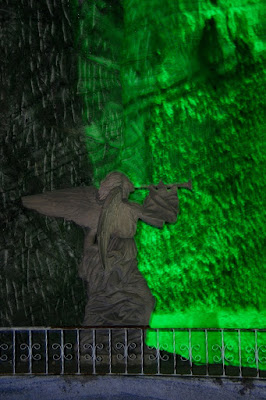 Within the mines, they have the tourist parts lit up with erie neon lights. Disappointingly, this angel was by far the most intricate carving in there. After Wieliczka in Poland (see the pics from there in my archives), I figured it would be difficult to meet my expectations. Still, seeing such massive chambers and any carvings so far underground is quite impressive. Plus, this was a working mine, so every once in a while there would be a very large, earth shaking boom from where the miners are working below. That was pretty cool and kind of scary! 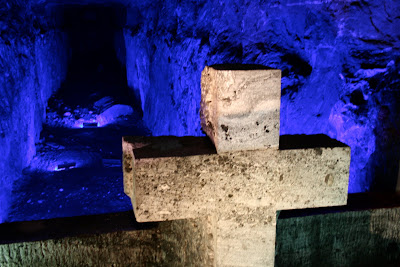 The cathedral goes through the Stations of the Cross using a series of crosses in various setups to symbolize each Station. 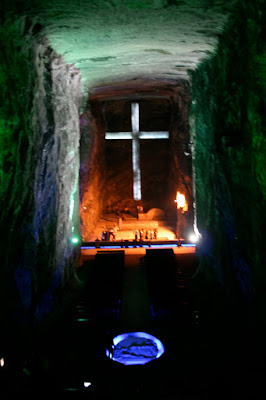 At the end is a series of massive chambers and the cathedral itself. 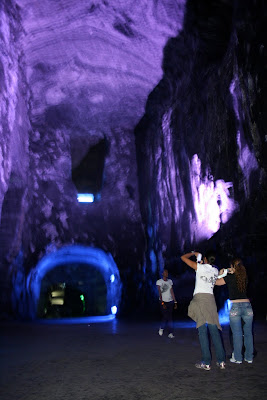 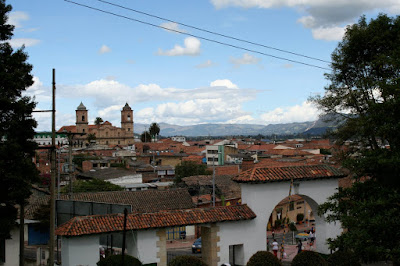 The view of town from outside of the mine. Zipa's cathedral (seen in distance here), looked more like something out of North Africa than South America and dominated the skyline (obviously). This was the first we'd been outside of Bogota on our trip, and I couldn't stop thinking about Colombia's ongoing war with the guerrillas. I knew we were safe in Zipa, but still, it is really crazy when you consider that there are large regions of the country, some very close to large cities, that are totally out of bounds, particularly for people with foreign passports! That nagged at me throughout the first part of our trip through the central mountain region, but we had no problems, and other than the ever-present military and some interesting security precautions (like bus companies doing a pre-departure walk-through of the bus with a video camera to have video evidence of who exactly was on board), we never would have thought there was an ongoing civil war in the country. 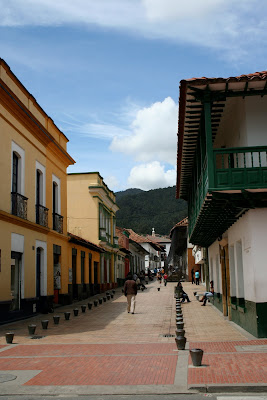 Compared to Bogota, Zipaquira was really a clean town! This was where we had our first real exposure to the brilliance that is Colombian fruit too...there were plenty of fruit stands along the streets. It was here, too, that I had my first limonada, blended limeaid, which I became absolutely addicted to throughout the trip. 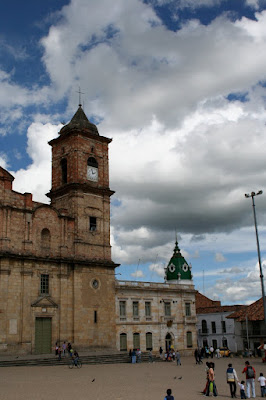 Zipa's cathedral and main square. We ended up staying here longer than we thought and got back to Bogota right around sunset. We even got separated in the mad rush hour on the way back, but fortunately, we all knew how to get back to the hostel and met up again at our bus stop. This ride back, and Bogota in general, made me feel like a visitor again, similar to how Missy and I felt in China. Everyone knew we were outsiders, and they seemed intrigued by us. We got lots of looks and some outright stares, but we had no problem drawing smiles from our observers. Colombians turned out to be quite friendly and mostly very inviting people!
Posted by Drew at 8:50 PM