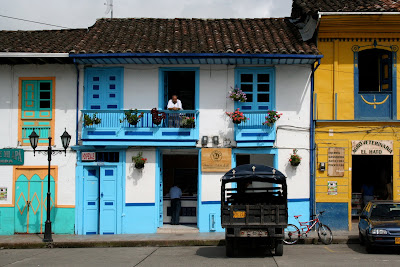 A slow morning start in a sleepy, mountain town. It took us an entire day on a nice bus (really, really comfortable seats on a long distance charter bus, which is common for long distance travel in Colombia) suffering through the latest John Sena movie blaring over the built in tvs (which they just repeated when it finished the first time), but we got into Salento by sunset. I was glued to the window the entire way. From Bogota, we came out of the Eastern Range of the Colombian Andes, through the lush Magdalena River valley, and then into the daunting Central Range of mountains. Colombia is an incredibly beautiful country. Having only seen mountains at higher latitudes, I'd never seen such rugged mountains with tropical forests growing on them...pretty impressive. Many of the landscapes reminded me of New Zealand, and for anyone that knows me, that is saying something for how beautiful Colombia is! Anyway, we had a lunch break in Ibague, a large town at the eastern side of the Central Range before venturing slowly but surely through these impressive mountains and valleys. At the highest point on the drive, we topped out at ~11,000 feet (a little more than 3300 m)! The bus seemed to struggle, but the driver had no problem passing the massive amount of commercial trucks, which were all struggling much more than our bus was. The best was how they do the passing down there. The highway we were on consisted of two lanes, and being in the mountains, there were plenty of hairpin and blind turns, which didn't seem to bother anyone passing...kind of terrifying really when you had 1000 foot dropoffs to the side. We made it to Armenia though where we transferred onto a minibus for Salento. The last hurdle was the mandatory military stop and checkpoint on the way up the road to Salento. There is still a significant drug and guerrilla presence in parts of the Central Range area, and supposedly this checkpoint is always there. Anyway, two armed men in Colombian army fatigues (who we were used to seeing at this point, they were all along the main road from Bogota) got on the bus and told everyone (in Spanish) what was going on. The bus then promptly unloaded except for the large old woman sitting between the aisle and Missy and I. So there we were, trapped on the bus by a stubborn old woman, who refused to trouble herself for any army checkpoint. One of the guards came on the bus and chatted with the woman a bit. He then assumed (mostly correctly) that neither Missy or I spoke any Spanish (or he just didn't want to bother putting up with our butchering of his language) and gestured that he wanted to see inside Missy's bags. He didn't do a very thorough check; I think he was mostly satisfied that we were willing to show him at all and was slightly amused that the old woman had trapped us and obviously made us worry a bit about not following the rules. He smiled and went back outside. Meanwhile, our friend Jack was one of two men from the bus chosen for a full pat down and search of their bags. Jack must have looked shady to Colombians because he seemed to draw all the wrong attention. Anyway, no problems with the checkpoint, and we were finally on the last leg to Salento. 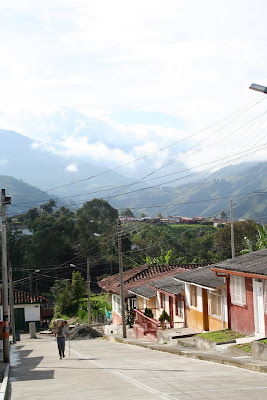 A man hauling coffee. Salento is in the heart of the coffee growing region, and as is commonly known, Colombia produces some of the world's finest coffee. Salento is still quite a small town though, and we were really happy our first night by how safe we felt (compared to La Candalaria and Bogota) walking around the streets at night. We had dinner that night, and breakfast the next day, at a place just off the central square that was recommended to us by our host at the Plantation House hostel, which had absolutely delicious food cooked in a kitchen in the back (totally open and visible to the customers) by the owner, his wife, and his mother. There is a large creek (or small river) that flows in the valley adjacent to Salento, which sits up on a little plateau off the valley floor, and this creek produces some excellent trout, a staple in the local diet. 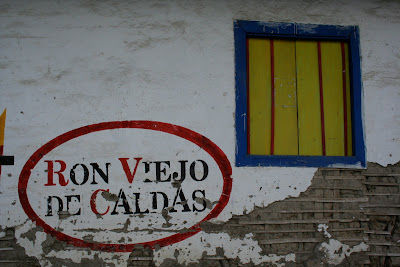 Rum. Colombians produce rum, Ron Viejo being the most famous, but their true liquor passion is for aguardiente (fire water) that is an anis flavored liquor and packs quite the punch. Still it is not uncommon for a group, women and men alike, to sit down and polish off a few bottles of the stuff in one evening, chasing it all down with beer. The Colombians don't mess around when it comes to drinking. That first night in Salento, we ended up doing a mini pub-crawl through Salento's 3 or so bars. The last one we went into was by far the rowdiest, even though the only people there were the owner, his family, and his employees! The owner was well on his way to a hell of a hangover the next morning, as the five of them (only three of which were drinking) were just finishing up their first bottle of aguardiente and about to open their second. They appreciated our patronage and enjoyed a nice conversation in our broken Spanish (though fortunately at this point we had met Phillip, a Brit who is fluent in Spanish), and many a shot of aguardiente were passed around to the cheers of: "Colombia!" Good times, and just another example of how friendly and welcoming most Colombians were to us. 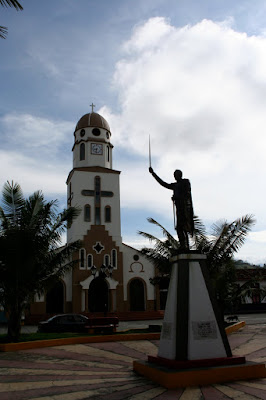 The church in the main square. Salento is tiny...and beautiful because of that! I hope it stays that way. As the owner of the Plantation House (John, another Brit) said: "The day a McDonalds opens on the main square in Salento is the day I pack up and leave." I wish we could have stayed here longer...it's the kind of town that just invites you to get lost from the rest of the world for a little while. It's small, safe, friendly, and surrounded by some of the more beautiful scenery I've seen. 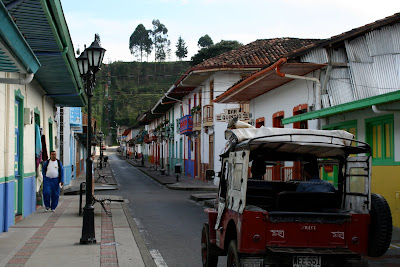 The required form of transportation around Salento: Jeeps. I'll talk about this more in the next post, but just a little teaser here: the Jeeps are necessary to handle the rugged terrain further up in the mountains, and just up over that hill in the distance lies the Valle de Cocora, one of the most beautiful places I've ever seen. 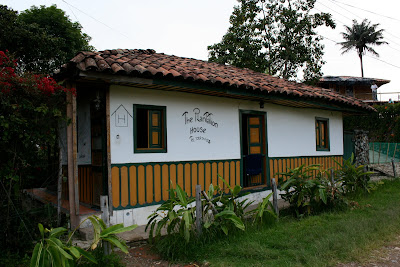 Our hostel, owned by John. It's called the plantation house because he also owns a coffee plantation! The place was really comfy, just adding to the whole "stay here and forget the world for a while" feel. 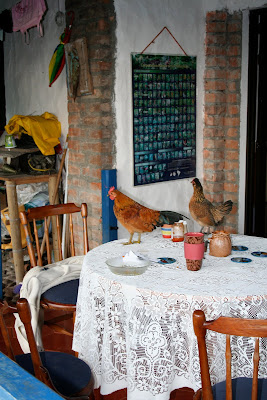 Chickens on the breakfast table... 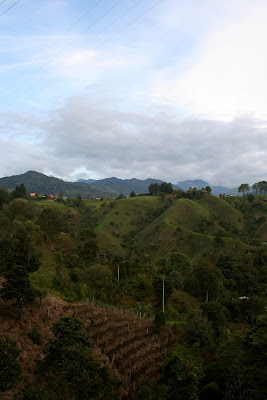 Scenery just outside of town. 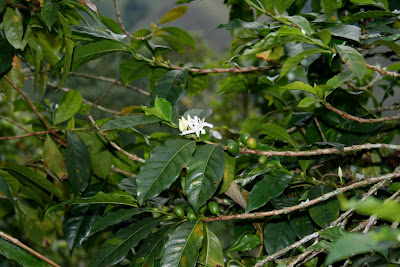 Coffee trees. The white flower will become a coffee bean next year, and those little green beans are the famous product in raw form.

John's plantation. Amazing really...the location is stunning and he has just about ever fruit you can think of sharing the grounds with the coffee trees. Everything from bananas to avocado to strawberries. He even has a lone pineapple plant! This is all testament to the incredible climate provided by the Colombian Andes...they can grow just about anything they want in this country! 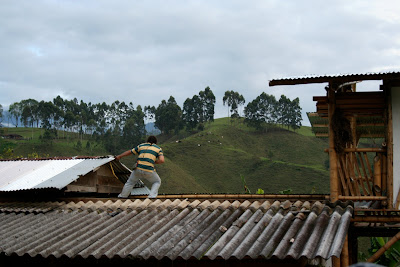 One of John's employees demonstrating how this section of the roof can slide back and forth to uncover the coffee beans that are put out to dry in the sun. You can slide it back quickly in case of rain. 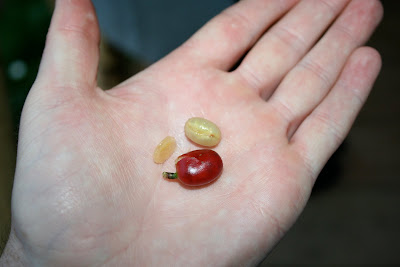 When the beans on the tree turn red, they are ready to pick and process. A simple squeeze reveals the familiar coffee bean, though it is light (since it hasn't been roasted yet) and is covered in a super sweet syrup. The beans are soaked to lose the sweet syrup coating and put out to dry. Then they are bagged up to be sent out for roasting. John's coffee plantation is extremely small scale, and his plan is to do custom coffee, where people buy the coffee from certain trees on his plantation in advance. When a customer's coffee is ready, he will either send it to them ready to roast (if they wish to do it themselves) or will have one of the local roasters in town (Salento has many...and the coffee here is INCREDIBLE) do it for them in the Colombian style (different from the various French, Italian, and other styles of roasting). All I know is that I'll be looking to purchase some of John's coffee some day...the flavor is amazingly rich and complex and not anything you would want to cover up with sugar or cream...and the best part is, the coffee from the plantation is free to guests staying at the Plantation House. Like I said...a place you could easily stay for a little while. 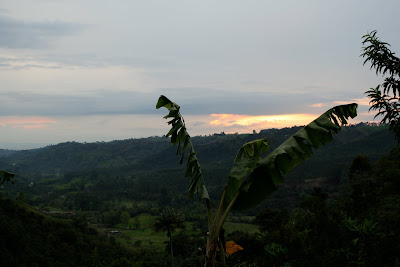 Sunset over the valley from the plantation.