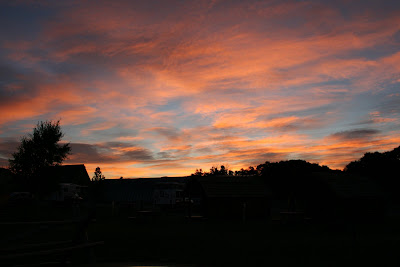 Missy, Bailey, and I woke up early to this sunrise at our campsite in Northwestern Wyoming. We were on our way to spend five days and nights driving, hiking, and camping through Grand Teton and Yellowstone National Parks over an extended Labor Day weekend (September 2008). We had left after work the day before and drove into the early morning to cover the huge distance between Boulder and the far corner of Wyoming. 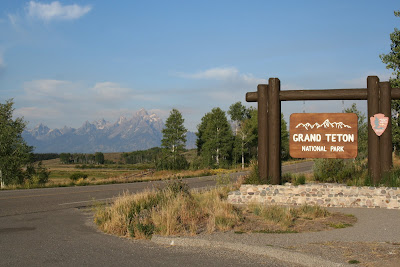 Entering Grand Teton National Park from the Eastern, Moran Entrance. The Teton range bursts out of the valley running the length of its Eastern sides. Grand Teton itself (the tallest mountain in this picture) rises nearly 7,000 feet above the 6,800 foot base plain to an altitude of 13,770 ft. It is spectacular seeing these massive mountains towering so high above you and dominating the landscape for miles and miles around them. 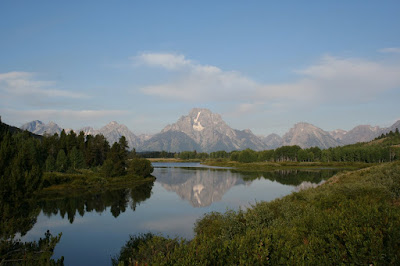 Mt. Moran and its reflection on the way in. 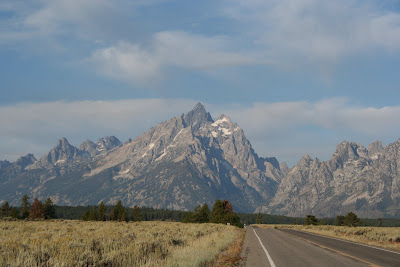 As I mentioned above...the mountains dominate the landscape. These pictures do little justice to the real thing. I found it absolutely spectacular to have such a broad, flat valley (the Snake River valley) and this behemoth of a range right next to it that absolutely ignores the notion of foothills and gradual inclines. 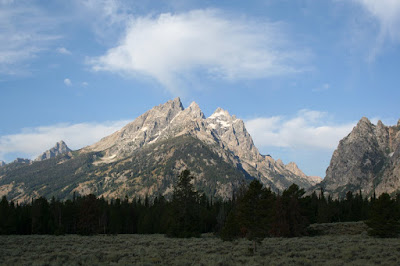 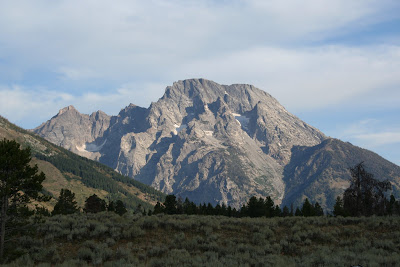 Mt. Moran, from the side this time. 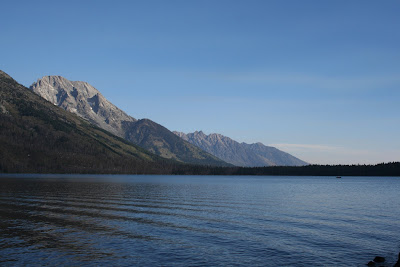 Yet another of the spectacular features of the valley is the series of lakes that run along the very feet of the mountains themselves. They are crystal clear, glacial lakes, carved out by the spectacular forces of those receding rivers of ice. I heard from a geologist once that the fault along which the Tetons lie is still very active (obviously when you look to the activity in Yellowstone to the North) and causing the Tetons to grow higher while the lakes get deeper. I haven't confirmed this, but if true, that is pretty cool. 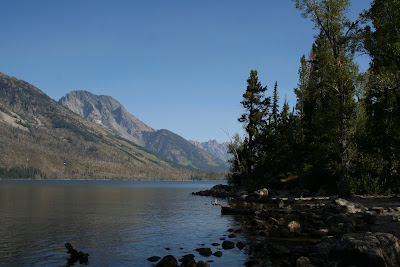 Mt. Moran from the beautiful Jenny Lake and just a short hike from our campsite. 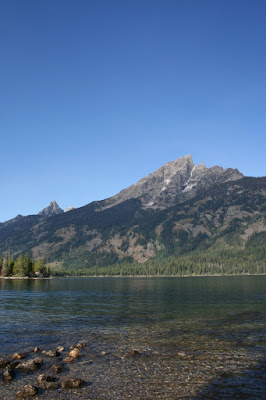 Grand Teton and Jenny Lake. I absolutely fell in love with the area around the Tetons. As for what I look for in nature, you can't get much better than this. 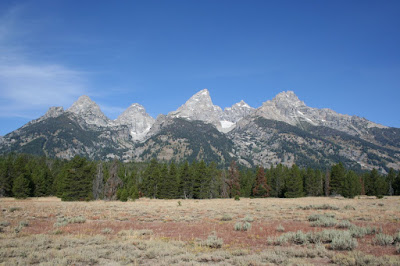 The Tetons. Their modern name derives from what some apparently sex-deprived French-Canadian fur traders called the three dominant peaks: Les Trois Tetons (Translation: The Three Breasts). Somehow, this perverse nickname stuck, and now the United States has a National Park named after a grand tit. 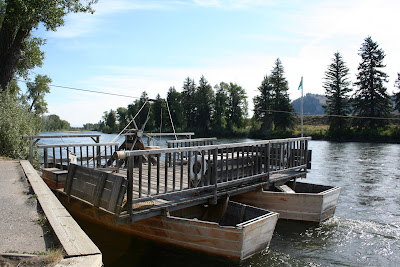 Menor's Ferry. This ferry is part of a historic area in the park, where settlers once made their livelihoods and homes. Menor's Ferry used to be one of the only places for miles to cross the formidable Snake River. The ferry itself is an ingenious design, the guide rope above it restricts its motion to basically one dimension (along the line), and due to the angle on the two pontoons in the water, the side-to-side (in the direction of the guide rope) component of the force moves the ferry. So with the set up in this picture (ferry angled left into the stream), the ferry wants to move left but is stopped by the wall; to move right, just angle the ferry the other way (right into the stream) and let the river do the work for you! 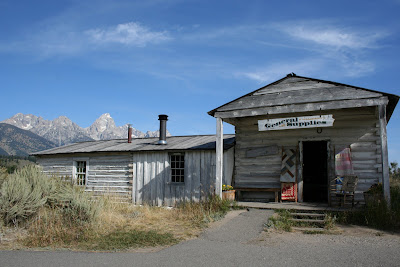 The old General Store at Menor's Ferry historic area. They still sell goods, and the interior is decked out with antique, settler-era furnature, stove, and memorabilia. It is definitely deserving of a walk around inside. 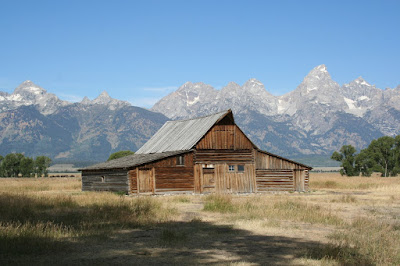 One of the barns along Mormon Row...and yes, that is a herd of buffalo behind it on the left! I can only immagine living in this area in the 1800's...it would have been amazing and terrifying at the same time being so secluded in such a beautiful part of the world. I was blown away to find that there are still private residences INSIDE the park limits! They are left over from before the area had national park status. Lucky, lucky (and probably filthy rich) owners. 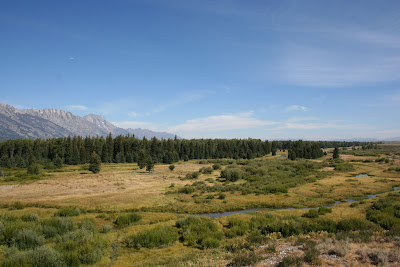 The area around the Snake River is lush. 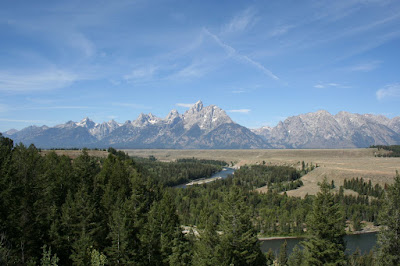 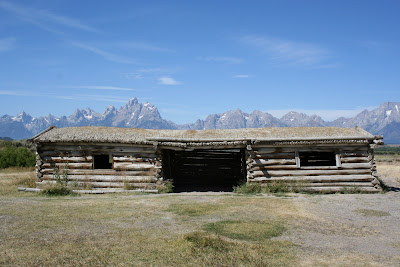 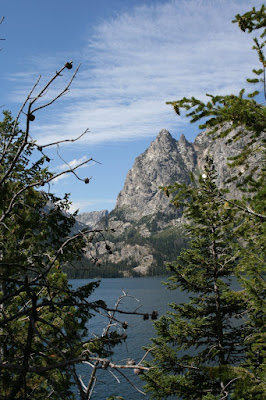 And more spectacular views. I found myself as I was in Australia at Uluru...I could not stop taking pictures of these massive peaks. Each new angle, setting, and lighting provided another opportunity I couldn't let pass by. 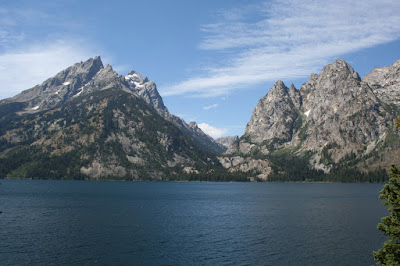 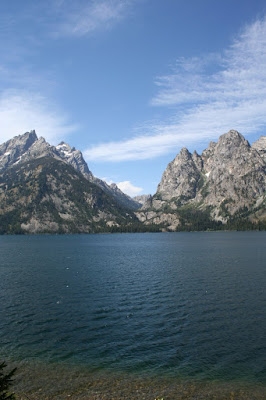 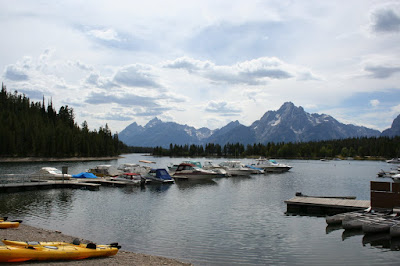 I was surprised and a little disappointed to find a full-out marina at Colter Bay Village along Jackson Lake, the biggest and least natural (it is pretty much a reservoir created by a massive man-made dam) of the lakes. Though taking a couple kayaks or a canoe out would be spectacular, I just don't enjoy the sound of gas motors so much when I'm in such a beautiful area....though I'm hypocritical now since we drove in a car to cover the parks large distances. 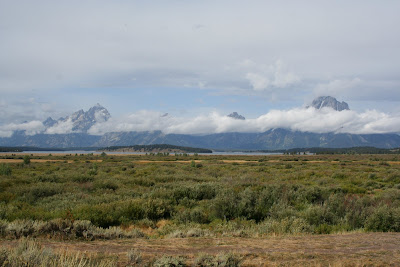 On our second morning in the park we woke up to find this thin blanket of cloud resting midway up the range. The picture does little justice to just how cool this looked, especially since the clouds morphed and evolved in real time, disappearing within about an hour of when we first noticed them.
Posted by Drew at 8:45 PM