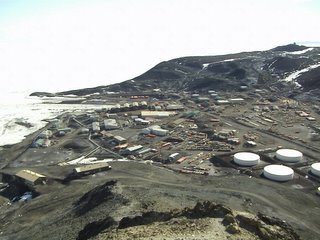 McMurdo Station once again. This is a sweet shot of the station from Observation Hill (well named eh?), which we climbed on our delay day at the station. McMurdo houses about 1000 people during the summer months. It is a very busy station and the food is NOTHING compared to that at Pole. Still, the mountains and ice shelf make for very nice scenery! 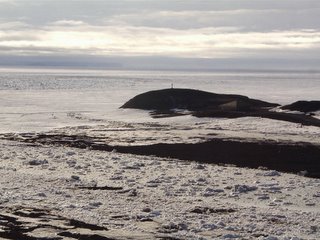 This is a picture of the ice dock (where the ice breaker comes into) and Hut Point. Hut Point has a memorial cross and Scott's Hut on it. Back in 1902, the hut was built to house Scott's expedition when their ship was caught in the ice and they were forced to winter over (that would SUCK back then). The hut was used in later years for other expeditions. It is really cool too because the wood on the hut looks like it is brand new. The extra cold weather has let it keep very well. 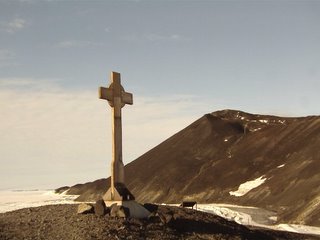 The memorial cross at Hutt Point. This was for a sailor that fell into a crack in the ice near the point and died. There were also some seals on the ice when I was here. They were pretty boring, however, as they just layed on the ice flicking the odd flipper every now and then. I guess I wouldn't be too active either if I were that awkward out of the water... 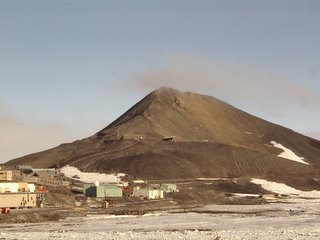 This is a picture of Observation Hill. People climb this to get some great views of McMurdo Sound, Ross Island, and the mountains accross the ice shelf. On our delay day, we climbed this, then hiked over to the Kiwi station: Scott Base. Scott was awesome! Very cozy inside with the usual friendly Kiwis all over. Their bar/game room was the best. They had a stuffed kiwi bird and maps from all over the world, plus darts and an old pool table. Very comfortable base those Kiwis have going on! 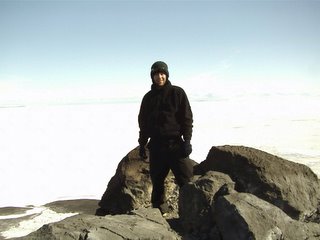 Here I am at the top of Ob Hill. The background didn't turn out too detailed, but it was beautiful up there. 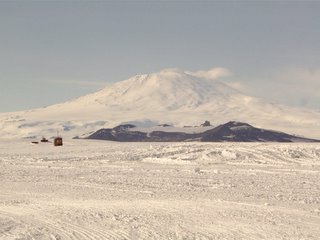 This is a sweet shot of McMurdo Sound with Mt. Erebus in the background. McMurdo is right in the center (we are far from it and it is quite hard to make out, but trust me, in the center where the ice meets the rocks is that huge, 1000 person station. Ob Hill is the little one in the very front right). Mt. Erebus is a massive (12000+ feet) ACTIVE VOLCANO! Yea, that smoke coming out of the top is not a cloud folks! It and its neighbor, Mt. Terror (how sweet of a name is that for a mountain!) make up the bulk of Ross Island. This picture was taken from the larger airport on the ice shelf: Pegassus. It lies quite a distance (as you can see here) from the station and is the station used for C-17 flights. I got my last glimpses of the frozen continent from here, and with such a clear, sunny day, they were unbelievable!

Looking at those pictures of NZ are really making me want to catch the last flight out of pole. Keep up the postings. I'm definitely using this as a reference when I finally head off. Your pictures even make Mactown look interesting.
When I went to Costa Rica last summer, we took about 20 pictures of the splash dolphins make when they go back in the water. I think video is a better idea when trying to catch dolphins.

Hello Drew, Thank you for doing this Blog ~ it helps me to picture where you are and what you're doing ~ with a slight time lag, of course. It's almost as good as getting an email or talking with you! So glad you are having fun ~ just keep on keeping on ~ so you can come home to us safe and happy! With love, Mom

It's really hard and tough to travel on this continent Antarctica because there is much freezing out there.
cheap stansted airport parking