Today, Jan 7th, South Pole Station had some special visitors. Two senators and several congressmen traveled to the pole to take a tour of the station. They were all on committees dedicated to the National Science Foundation, and were therefore very interested in the science and station here at the South Pole. 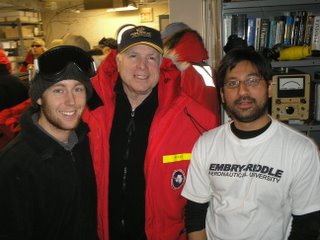 Yes, Senator John McCain was one of the two senators to visit, and I even got to talk with him! He knew of Embry-Riddle (from reputation as well as the campus in Prescott, AZ). He thanked Dr. Azeem and I personally for the research we were doing, and I must say that was pretty cool coming from a very possible candidate for US Presidency in 2008. I then thanked him for his work in the Senate, of which I am very much a fan. 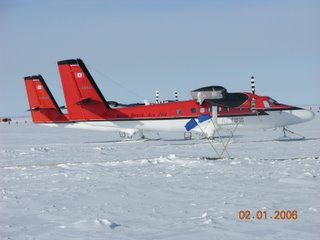 This is from a totally different day; but notice the Canadian flags on the tails of these "twin otters:" small planes used for flights around both poles. These were from a Canadian company that specialized in flying to very cold, remote areas, and I thought it was just nice to see some Canadian presence (especially considering we don't have a flag down here!!!).