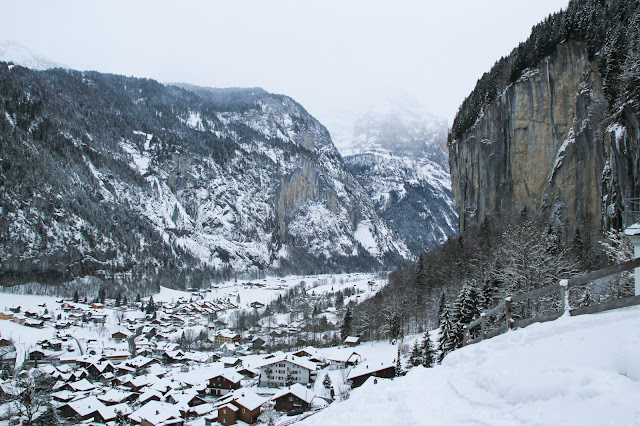 From Bern, the stunning Lauterbrunnen Valley is just a short (and precisely punctual) train ride away via Interlaken.  When I read about this being reputably one of the most scenic Alpine valleys in Switzerland, I couldn't justify going anywhere else. 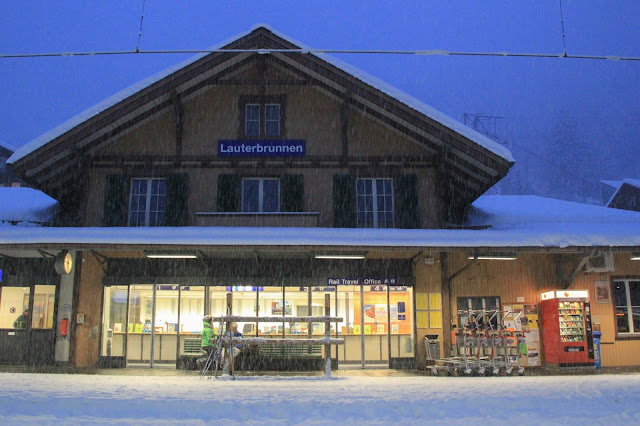 Lauterbrunnen is the gateway to the Jungfrau Ski Region.  The way skiing works in Switzerland is so much different than in North America.  Instead of mountains and the infrastructure to access their higher areas being run by large companies, entire regions in Switzerland are instead controlled by the local government, who issues the ski passes.  It is pretty incredible: a lift ticket basically covers an entire region of the country, and there are legitimate villages instead of the tacky and artificial resort towns that you find at the base of ski mountains in North America. 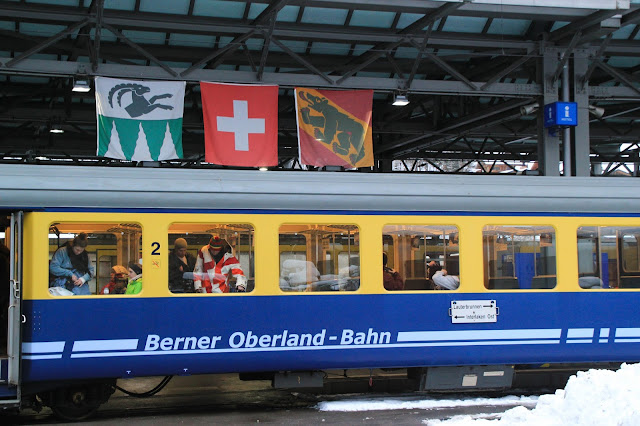 The train from Interlaken to Lauterbrunnen, and from left to right, the square flags of Lauterbrunnen (commune), Switzerland (country), and Bern (canton). 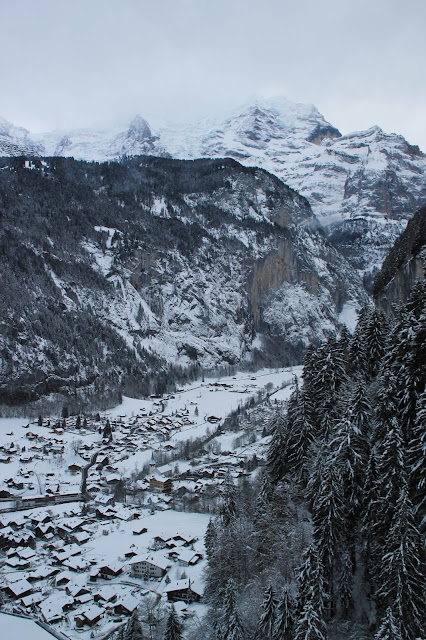 The town of Lauterbrunnen sits in the bottom of a deep "U" shaped glacial valley.  The valley has these epic cliffs on either side as well.  It is a spectacular setting. 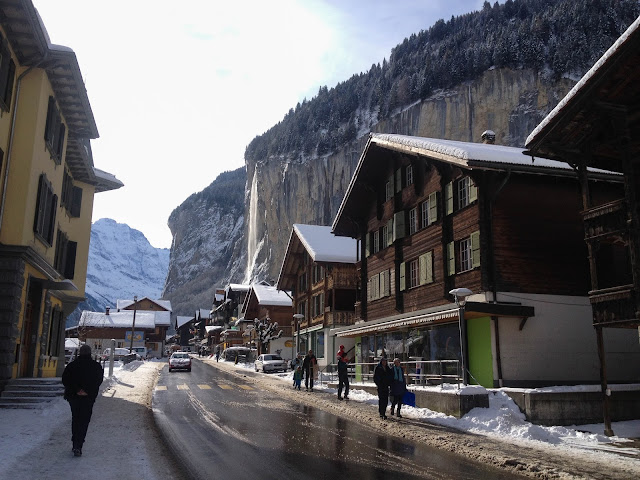 This valley supposedly inspired some of the computer generated scenery for Rivendell in The Lord of the Rings movies.  It is kind of unbelievably beautiful, and yes, that is a waterfall coming down the cliff in the background. 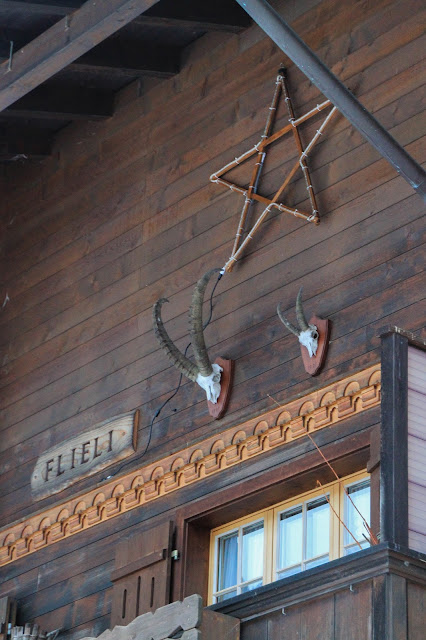 The town itself is pretty neat too.  It is rustic and so authentic.  The best part is that people actually live there.  These are homes, not dorms for lifties from Australia and New Zealand. 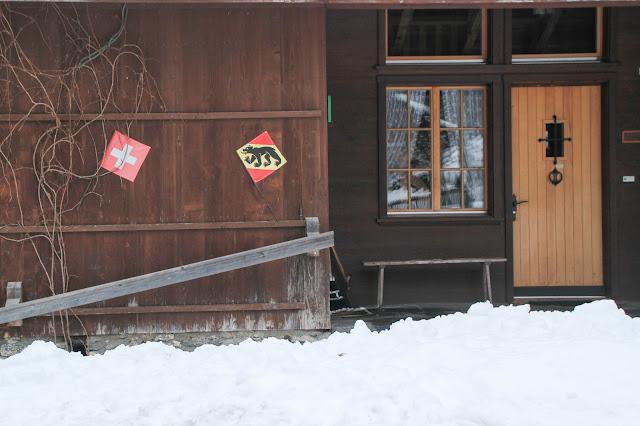 They are quality homes too, old ones that people have taken care of for generations now.  The woodwork is amazing. 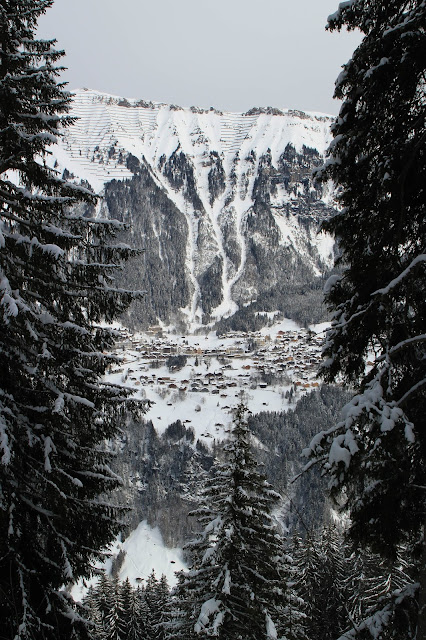 The mountains rise up abruptly on both sides of Lauterbrunnen and the other villages nearby (like Wengen, pictured here).  This explains the avalanche brakes above the towns... you kind of wonder how many Swiss towns were buried prior to the development of this simple yet effective technology.  I'd hate to be the guys that had to build those things up there... especially those that had to haul the materials UP! 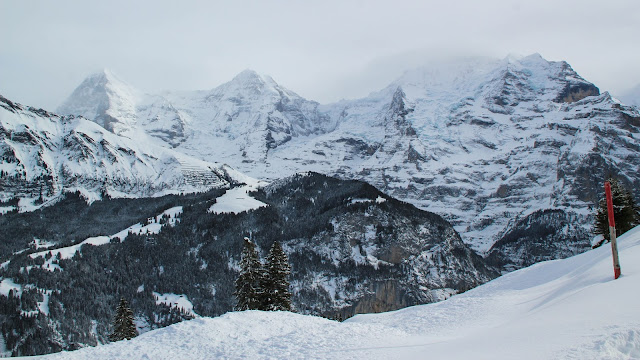 And the stars of the region, the trilogy of high Alpine peaks. The region is dominated by these three peaks in particular, which are revered with near God-like status both in Switzerland and internationally.  These mountains are: 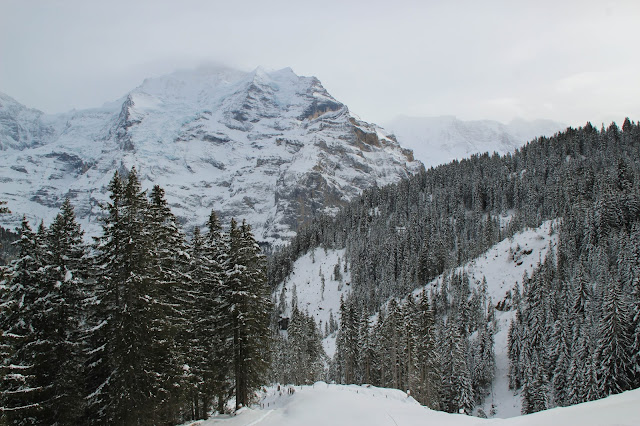 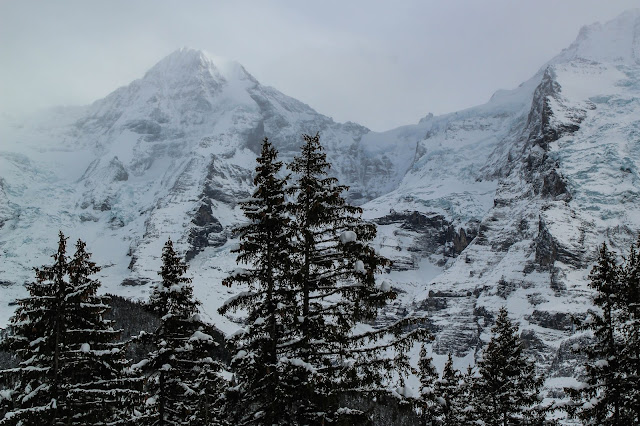 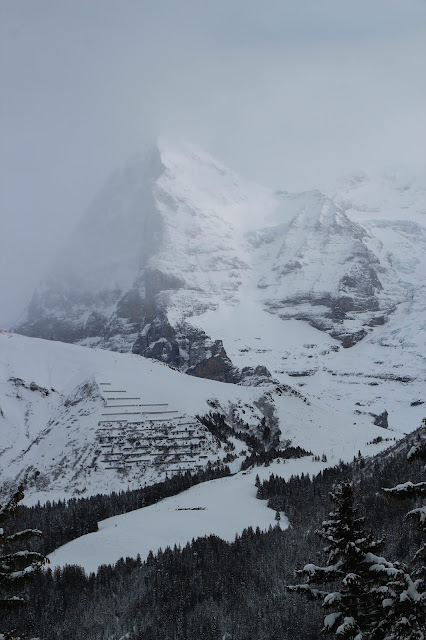 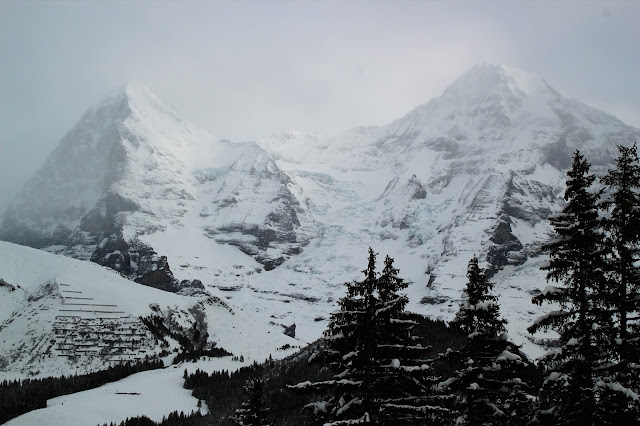 The Jungfrau is the biggest of the three mountains, but it is the Eiger that commands the most respect from mountaineers.  These mountains are where things get serious.  First of all, they are amazingly impressive seen from below.  The gradients in Switzerland are unlike anything I've become used to from California and Colorado.  Unlike in Colorado, where the most extreme you have is a 14,000 foot mountain shooting up out of a ~8,000 foot base plane (i.e., 6,000 feet of prominence), here in Lauterbrunnen, the Eiger tops out at just over 13,000 feet, which sits a solid 10,000 feet above the valley floor in Lauterbrunnen!  And that gradient is over just a few short miles; things are compressed in the Alps compared to the much more grandiose and spread out Rocky Mountains.  The Eiger in particular is so famous because of its north face, seen here on the left side of the picture.  The Eigerwand or Nordwand (the north face) is the biggest north face in the Alps.  Why is this a big deal?  Well, climbing the most extreme north faces (coldest and steepest due the geography and geology of the range) of the Alps were one of the great mountaineering challenges from the 20th century, and the Eiger is the king of them all. 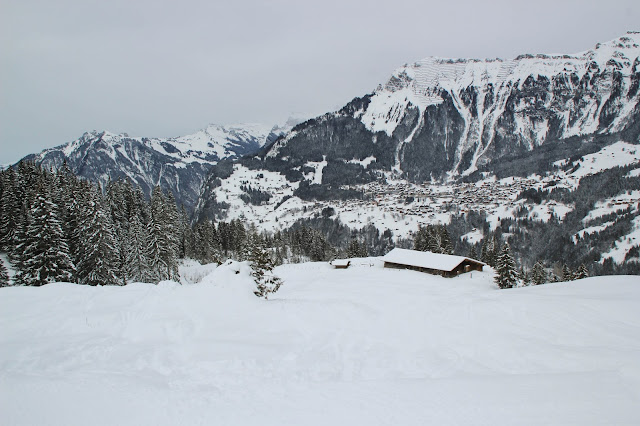 Back to the village of Wengen.  Wengen is much more of a ski resort.  It is only accessible by a cog-train from Lauterbrunnen, which works its way up the steep valley walls slowly but surely.  The village seems to be taken over more by Europe's wealthy elite, with ski chalets and cabins that obviously cost a lot of money.  The village obviously caters more to tourists as well.  It is the access point to the heart of the Jungfrau ski area though.  From Wengen, you can catch a series of cog trains, funiculars, gondolas, chair lifts, and T-bars to get you all over the area between Wengen and Grindelwald (a HUGE area).  I spent a day snowboarding there, which was epic!  My favorite was the lift up from Kleine Scheidegg, which takes you right up to the base of the Eigerwald.  It is spectacular, and being so close to the mountain gives you a hell of an appreciation for how difficult that climb must be.  You feel like an insignificant mite compared to the gargantuan chunks of ice and rock that so precariously jut and hang from the mountain.  That is another big difference from Colorado, the Alps are a lot more featured and complex than the Colorado Rockies.  Being much further north, they are also properly glaciated.  At one point up there, I saw the beautiful iridescent blue of the glacier glowing beneath me.  Amazing stuff. 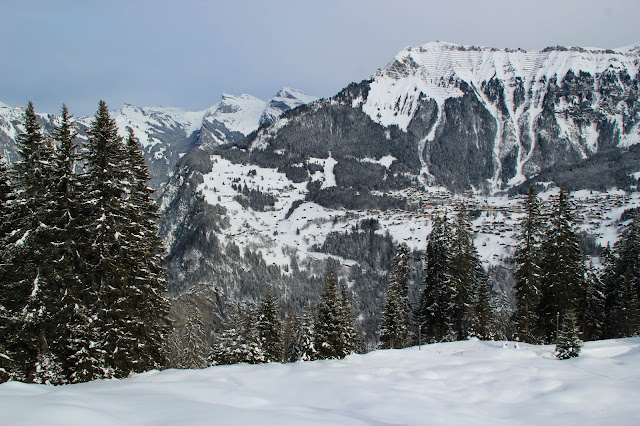 Then there was this... so much fresh, untouched powder. 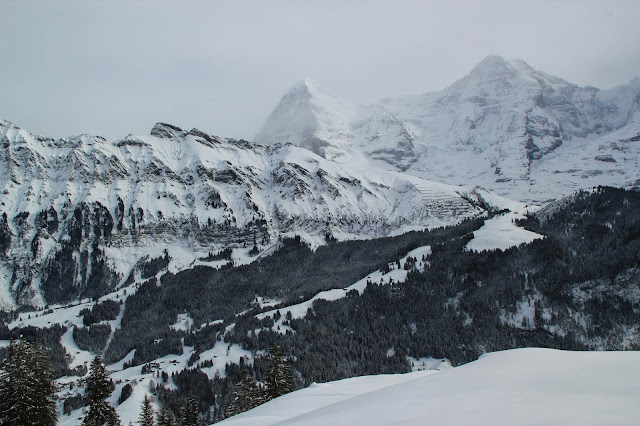 Looking across the Lauterbrunnen valley at the Jungfrau ski area.  Europeans apparently don't tend (on average) to go "off piste" (off the groomed runs).  I was careful about doing so, but I did so nonetheless.  The patches of untouched, thigh deep powder were just way too appealing.  I do understand their caution though: supposedly the area does not blast as thoroughly for avalanche prevention as they do in North America plus there is the added threat of the extreme features in the area.  It would be easy to end up off track and in a shoot or bowl or valley that ends abruptly with a huge cliff.  And if you managed to stop yourself from going off such a cliff, it would be a long, cold, and miserable slog back up to a safe alternative route to continue down to safety.  The weather also changes very quickly there.  On my day out, I went from patches of sun and clear mountain views to near whiteout conditions at the top within only a few hours; such displays of nature's power over us command respect from all but the suicidally stupid. 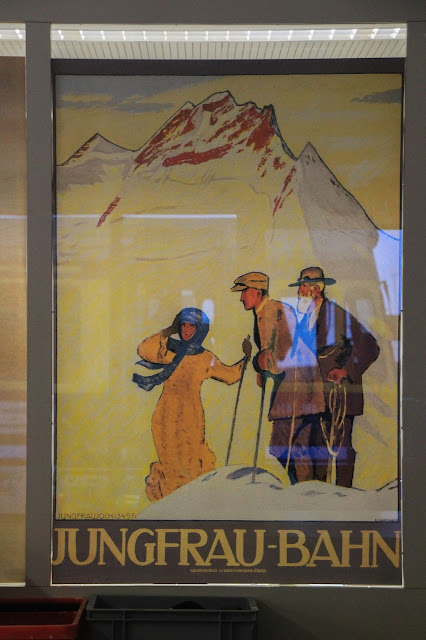 The train station had these amazing vintage resort posters.  This region has been a ski destination for about as long as downhill skiing has been a form of human entertainment! 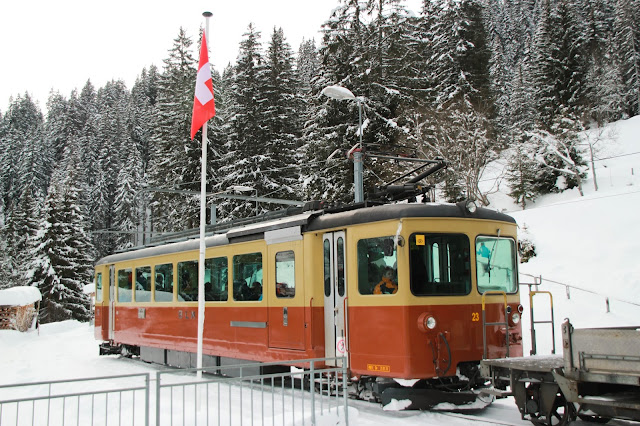 One example of the crazy combination of transportation they have to ferry people around the mountains.  It is so weird seeing a train like this carting people around at such altitude. 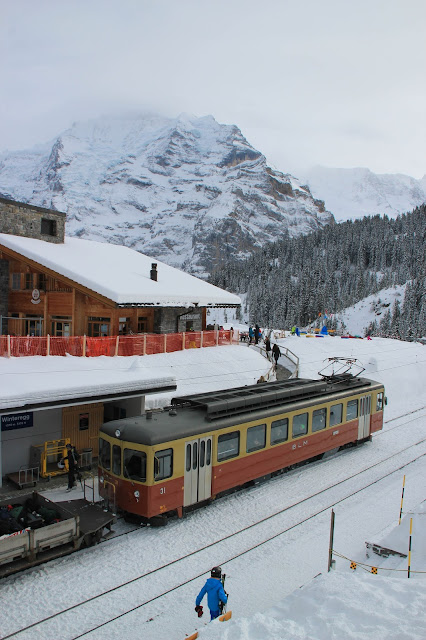 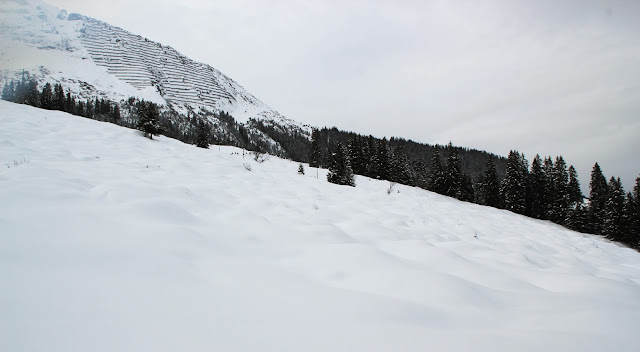 Like I said before: so much powder... it was a winter wonderland up there. 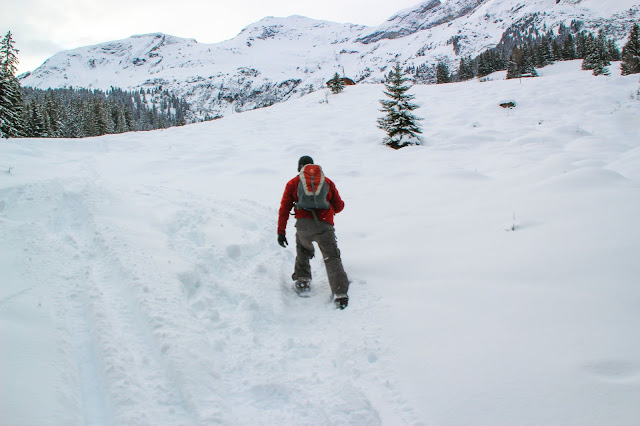 I also took half a day to do some snowshoeing, which was amazingly rewarding as well, both for the workout and for the views. 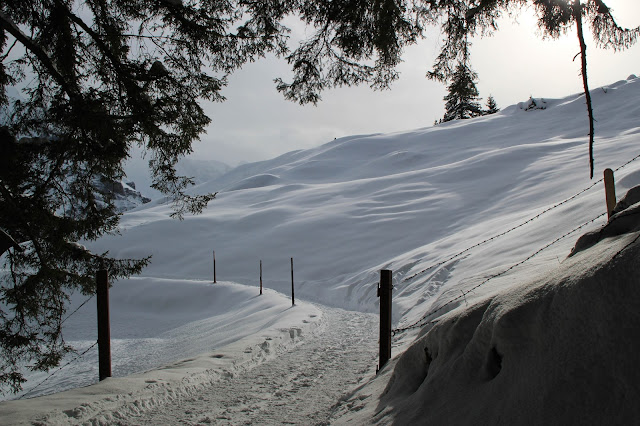 The Swiss know they have a good thing going, and they have done a great job keeping it that way. 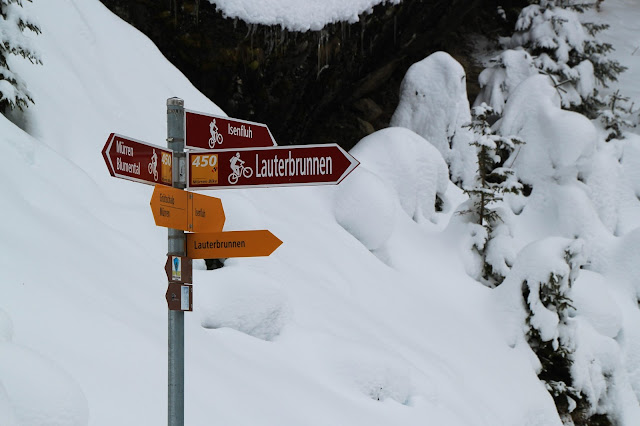 There are so many activities to do in these mountains.  When the snow has melted over the summer, these skiing and snowshoe trails turn to mountain bike runs. 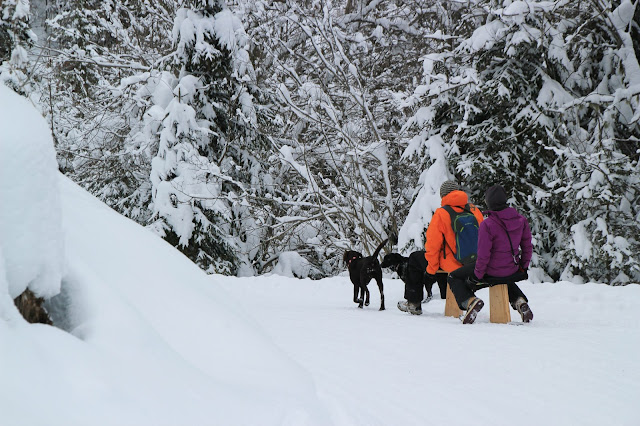 People also use all sorts of personal transportation devices to enjoy the ride downhill.  These ski benches were just weird, but a lot of people were using them! 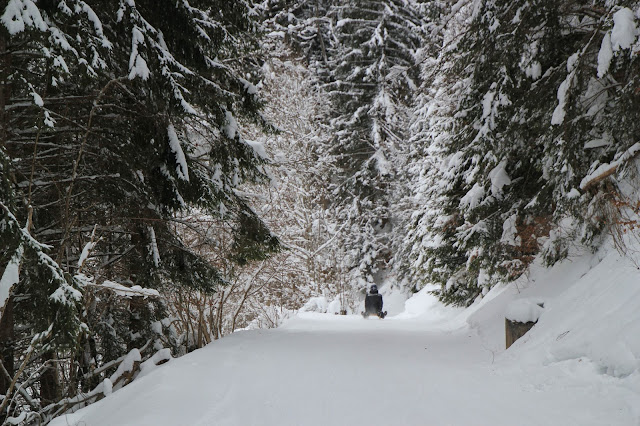 I saw many fun types of sleds too.  And these people weren't messing around either... this is a ski trail with a steep dropoff to the left, and they were moving very fast down this slope.  You have to know what you're doing to control a sled like that and be confident that you won't end up over that ledge and bowling for trees. 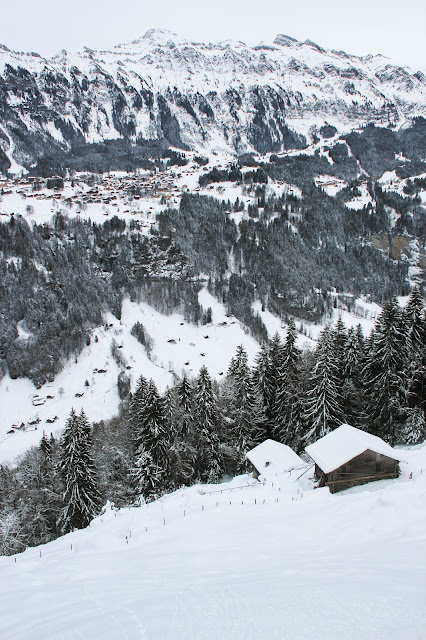 A view across and down.  The Lauterbrunnen Valley floor is so narrow and sits so far below that most of the time it is invisible. 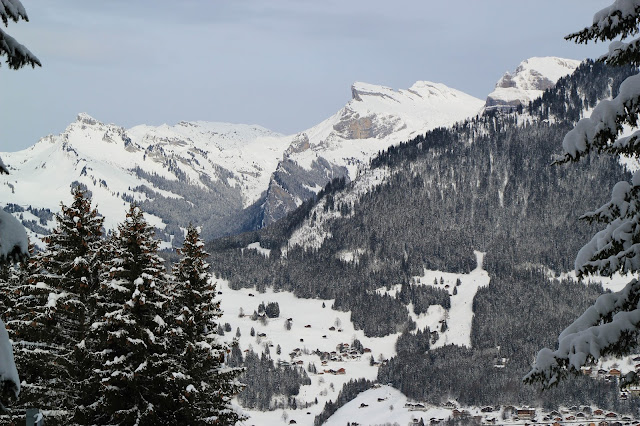 I love mountains, and you just can't beat this.  I need to get back to Switzerland and explore more there.  It is an extremely beautiful country.