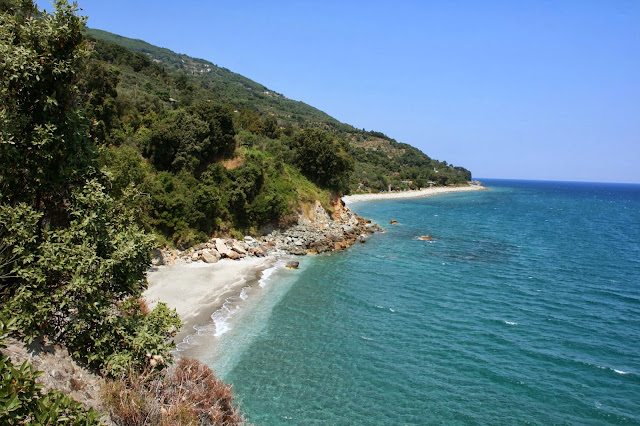 As anyone who is familiar with this blog knows, my favorite type of landscape combines beaches and the sea with mountainous terrain.  Make them warm, clear seas and lush, forested mountains with sparse human population, and you have my form of heaven.  I found all of this on Greece's Pelion Peninsula. 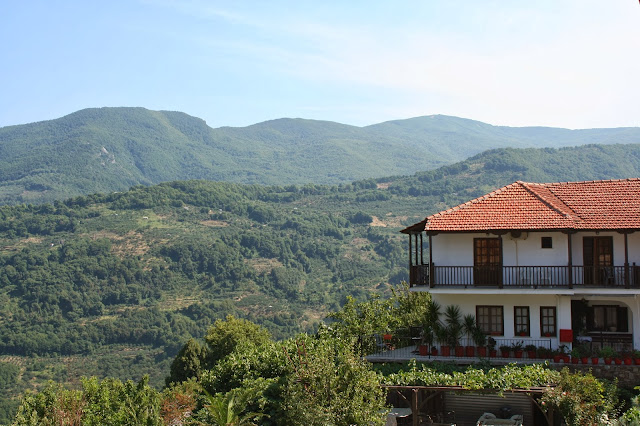 The Pelion Peninsula is dominated by Mount Pilio, which is also responsible for giving the peninsula its unique microclimate.  The peninsula is lush for Greece, with dense forests covering most of the landscape thanks to Mount Pilio's abundance of fresh springs and creeks.  This water also makes it an agricultural wonderland, with different types of fruits, nuts, grapes, and other crops grown around the peninsula. 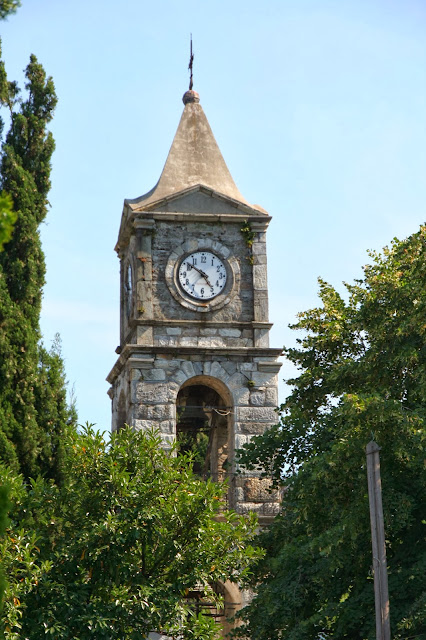 After a somewhat hair-raising drive through the sprawling city of Volos, which sits at the top of the Pagasetic Gulf, we drove up over the southern shoulder of Mount Pilio to Zagora.  Zagora is a big town for Pelion, but it is quite small by most standards, with only a few thousand people living there.  It is also immensely charming. 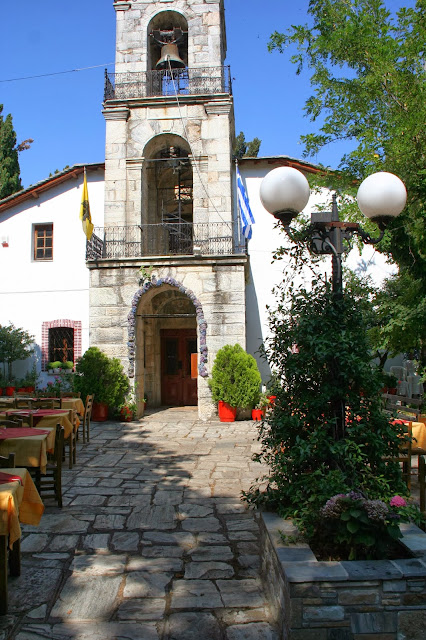 We stopped for a late lunch before continuing down the hill to where we were staying, in Chorefto.  There is this fantastic taverna on one of the main squares in Zagora (pictured here... you can't miss the church right off of the main road).  The place seemed to be family owned and operated, and the food was fantastic.  We had a fresh Greek salad, extra olives, tzatziki, and a local specialty: sausage cooked in olive oil with peppers and tomatoes.  It was delicious, and the atmosphere was unbeatable.  The place is just so pleasant... the air is not too warm and not too cool, just comfortable, with the lightest of breezes and a good, healthy scent of forest with just a hint of sea to it.  At that point, we knew we were going to enjoy ourselves over the next few days. 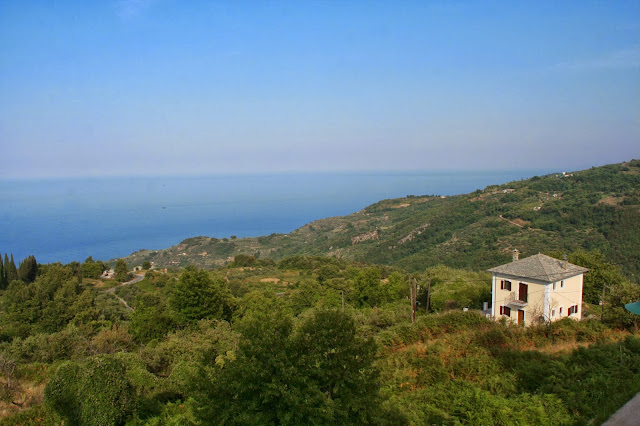 Despite how it feels most of the time driving or hiking around on the Pelion, you are never too far from the sea.  Every once in a while, you emerge from the forest and are treated to views like this: the steep terrain falling off to the sea below, with few houses and plenty of forest or orchards in between.

The Pelion is like a land that time has forgotten... in a very, very good way.  The region is its own little relaxed and very pleasant world, thanks mostly to its relative isolation due to the mountain and narrow, twisting roads.  With landscapes like this, it is no wonder that the Pelion is the mythical home of the centaurs.  Hiking through those forests makes you think that you might just stumble upon a herd of the wise creatures. 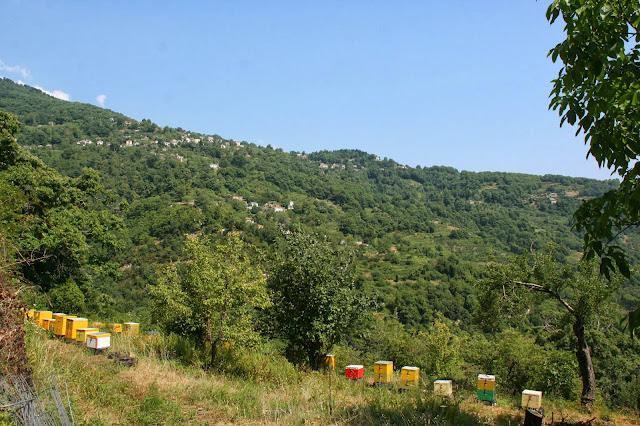 Another factor is agriculture.  The peninsula has a great climate for growing many different crops.  It was known for a long time for its apples, though the apple orchards have been recently giving way to other fruit and nut trees.  With all those blossoming trees around, the Pelion is also well known for its honey, as the bee hives here indicate. 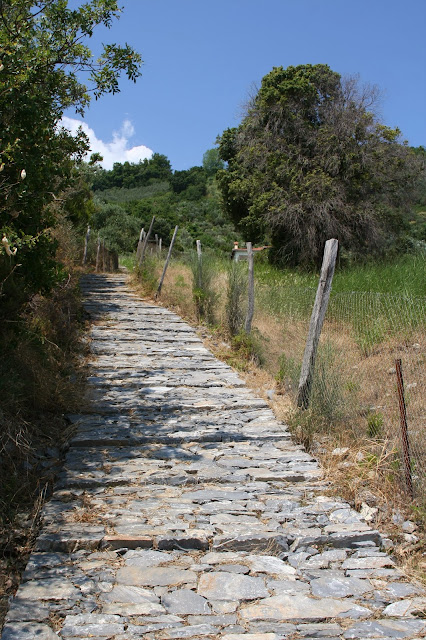 The peninsula is transected by interspersed hiking trails and walking paths.  Some are cobblestoned like this one, while others are just single-track dirt trails.   Most of them lead to something nice though, whether it be a charming little village, a stone bridge over a babbling creek in the middle of the forest, or a spectacular and isolated beach.  The rewards come at a price though; the terrain is very steep. 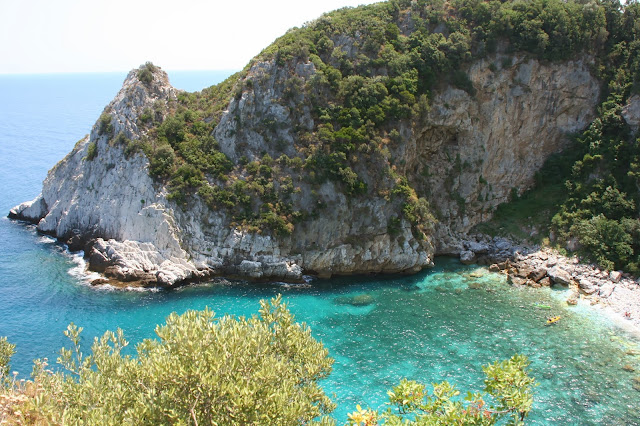 The path in the last picture led to this little cove... a hidden gem with crystal clear water and a stony beach.  There was even a waterfall (just a trickle when we were there, but supposedly it flows heavier at times) and small caves behind the beach.  When we first got there, we were the only people on the beach, and while we were there, we were only ever joined by 5 other people... not too bad.

A view down on the beach and that brilliantly clear water.  There were several places where the stones were small and smooth, where were fine to set up on.  Also, unlike so many of the other beaches we had been to, this one had plenty of natural shade to offer, whether it be in the shadow of one of the larger boulders or cliffs or under the trees further back. 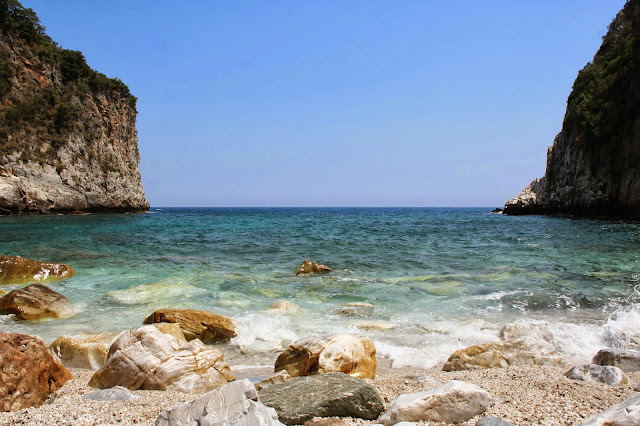 I was shocked when we got down to the beach and I realized that those large rocks and all the small pebbles were marble.  I couldn't believe it.  Being from North America, marble is always considered a luxury stone... something that fine art and monuments and expensive counters and tiles are made from.  So it was weird and quite amusing for me to be sitting on a marble beach in Greece.  The rocks and pebbles were beautiful too, having been smoothed and polished by the forces of the sea. 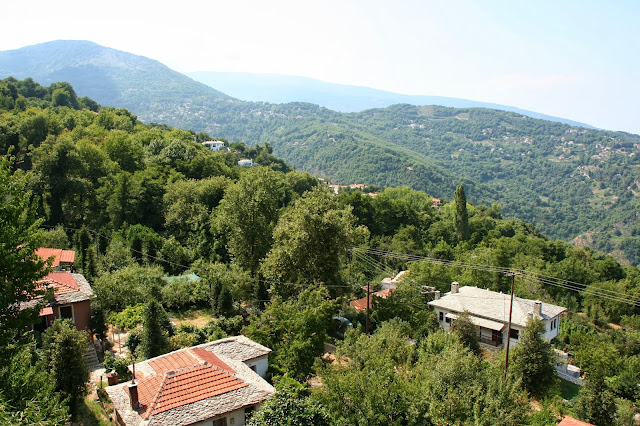 This is the Pelion... sparse population and lovely homes, plenty of forest, groves, and orchards, and those hills, ravines, and mountains. 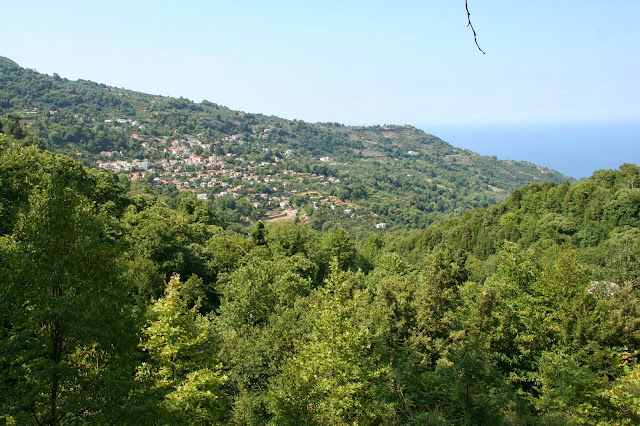 Then turn your head from the right vantage point and there is the big blue sea.  These pictures really can't do justice for the place... they don't convey the quiet calm to the air or the fresh, clean scents on the peaceful and refreshing breeze.  The place is idillic. 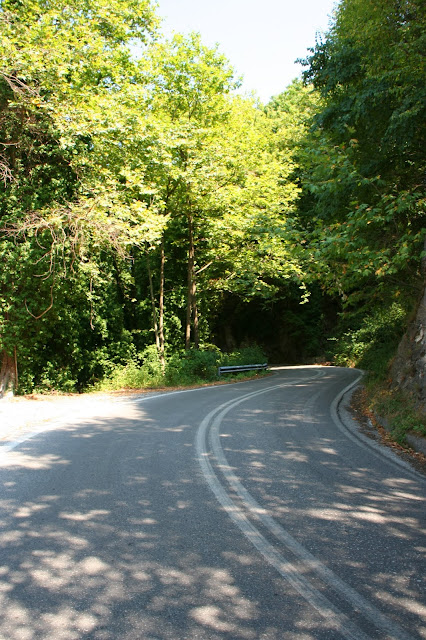 Then there are the roads... this is one of the "highways" through the Pelion.  The smaller roads don't have lines and are only barely wide enough for two cars to pass, and all of the roads are all very windy and very steep.  Being in a rental car, which was also a stick shift (I don't drive stick regularly, in fact this trip was the first I had ever driven stick more than just around the neighborhood or in a parking lot for practice), I was a little nervous at first.  OK, to be honest, I was terrified.  But, with day one down and us safely checked in to our hotel by the beach in Chorefto, I was a bit more confident over the next few days and by the end, actually started to really enjoy all the twists, turns, and hills.  If you do find yourself driving around the Pelion, though, have fun but go with caution.  You can come around one of the many, many blind curves and find yourself face to face with a large truck taking up three quarters of the road, a live tree taking up half the road (seriously... they had this in many of the villages... fortunately you're already going slow through those, so it isn't that big of a deal), or people and/or livestock out for a stroll (and taking up the entire road). 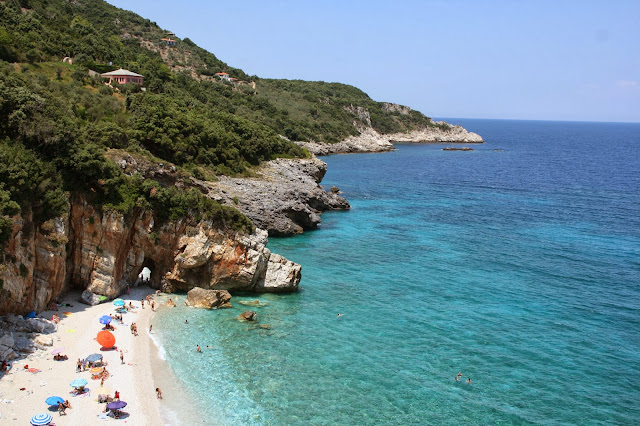 It is good to have a car there though, as a personal vehicle can get you around to places like this.  Mylopotamos Beach... yet another to add to my list of favorites. 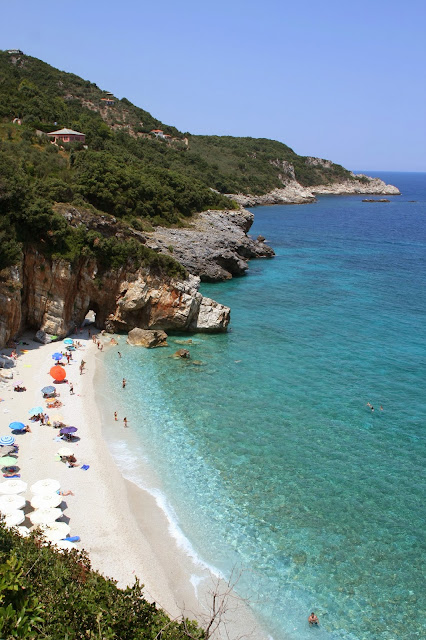 Yes, that is indeed a tunnel through the rock, and yes, it is natural.  I mean seriously, how can a place be so awesome and so well preserved?  I hope to never see massive hotels lined up along the top of the cliffs above this piece of perfection.  As is, there is a small restaurant and a parking lot amongst the trees.  This beach also boasts a small bar and snack stand down on the beach too, which makes things terribly convenient to lose a morning, afternoon, or whole day there. 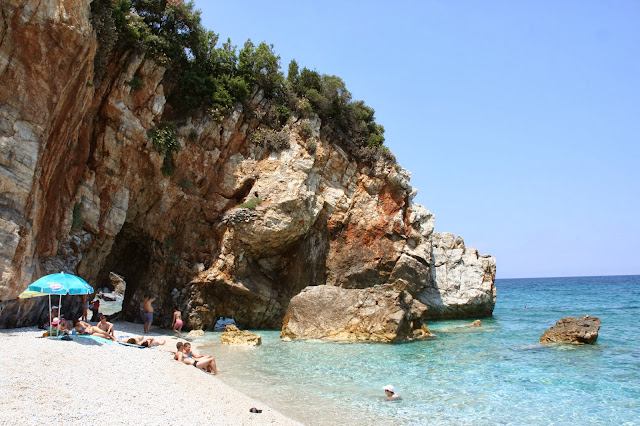 This beach was one of the busier that we visited, but it was worth it.  Through the tunnel, there is a the beach continues in a large cove with a tall cave that many people set up in to take advantage of the shade. 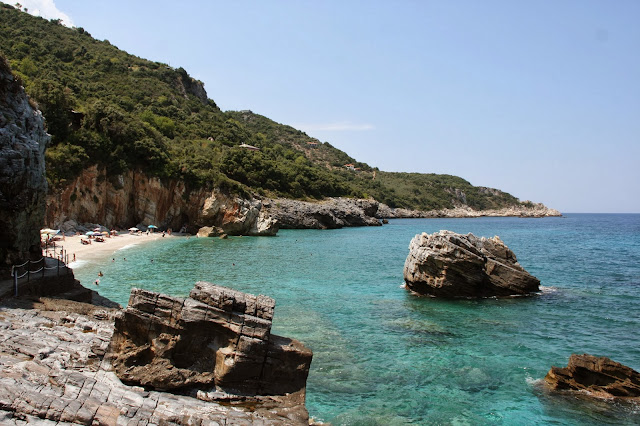 And then there are the rocks.  The beach is pebbly, which continues out into the sea.  However, there are large rocks and boulders strewn haphazardly about the coast line, many of which serve as fantastic diving platforms.  The one in the center right here was just perfect, offering up a ~4 meter plunge into ~4 more meters of crystal clear water.  I just loved the forested and steep backdrop too... it makes you feel so much more remote and lucky to be in such a place. 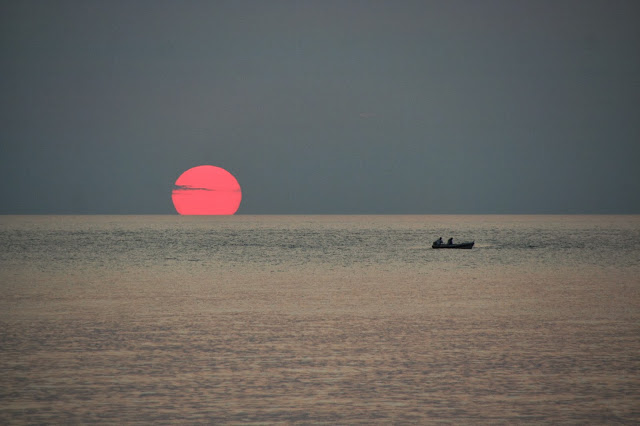 We woke up early on our second to last morning to take in sunrise from our patio.  It was a nice one, especially thanks to the local fisherman out attempting the whole "early bird" thing. 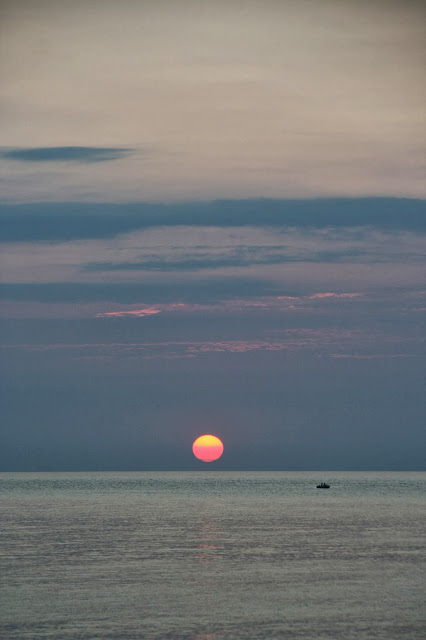 It was neat to look east and think that right across that sea is Turkey and Asia.  This is the same sea that Odysseus and the Greeks crossed during the Trojan war; the same sea that provided trading routes for Romans, Ottomans, and many more; the same sea that Nazis and Allies fought in during WWII.  History was one thing that we only really appreciated in Athens and Santorini (plus on the drive back from the Pelion when we stopped at Thermopylae, famous for the stand of 300 Spartans against a massive Persian army, and Khalkis, where Aristotle jumped off a bridge out of confused frustration over befuddling channel currents), yet history is all around you no matter if you're looking for it or not in Greece. 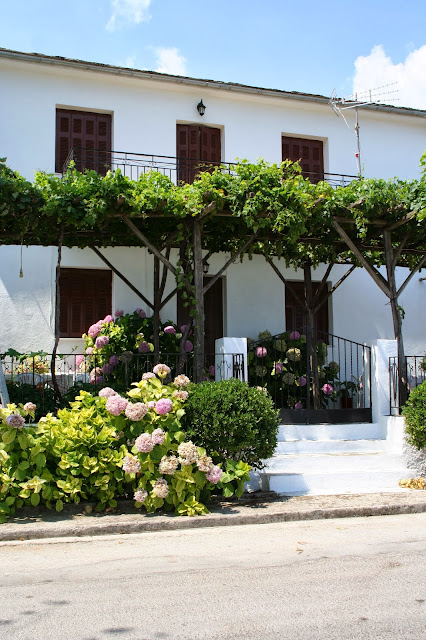 Chorefto also has quite a bit of history.  Many of the hotels and guest houses are converted from old, 19th-century mansions.  The gardens are all quite nice too... it is easy to see how well plants grow in the region. 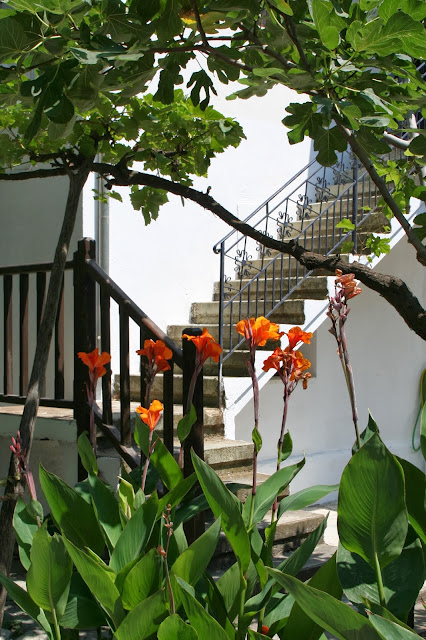 Chorefto is a nice little town.  It is spread along the main road that runs beside the beach, and there are plenty of little shops, tavernas, and restaurants to keep visitors occupied in the evenings. 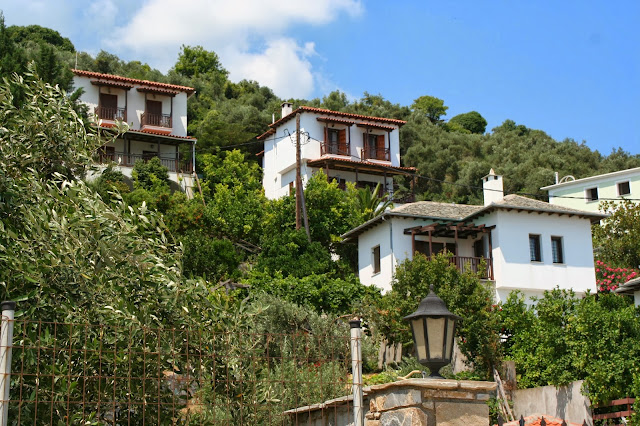 They were obviously developing the area too, with new, smaller buildings being put up along the shore line (like below)... how long can we keep pristine coastlines in this world? 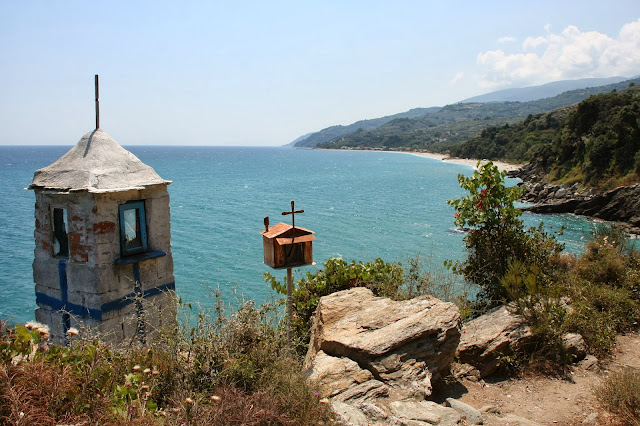 There was a nice hike along the coast north of Chorefto.  It went by this little shrine on the way to the beach featured in the first picture of this post.  I just loved these views from along it, showing the Pelion's forested hills and mountains plunging into the sea.