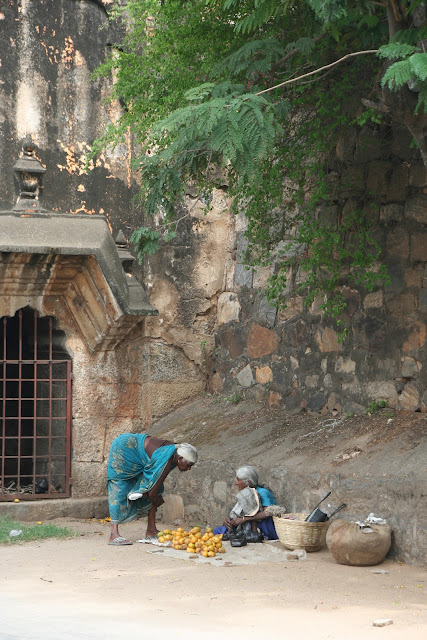 Just to the north of Mysuru, ~40 minutes by bus from the city center, is the religiously, culturally, and historically important island and community of Srirangapatna.  This makes a great half or full day trip from Mysuru.  It offers a brief glimpse of some Indian countryside, gets you out of the hustle and bustle (and filth, noise, crowds, etc.) of the city, and lets you experience some very interesting Indian history and culture.  When you get there, the bus drops you off at the edge of town, just inside the old fortress walls, which provide your first glimpse of the historical significance of the place.  Just inside one of the old main gates, I enjoyed watching these two older ladies haggling with each other over those oranges.  They obviously knew each other and had done that many, many times before, and they both took it very seriously, each trying to get the best deal! 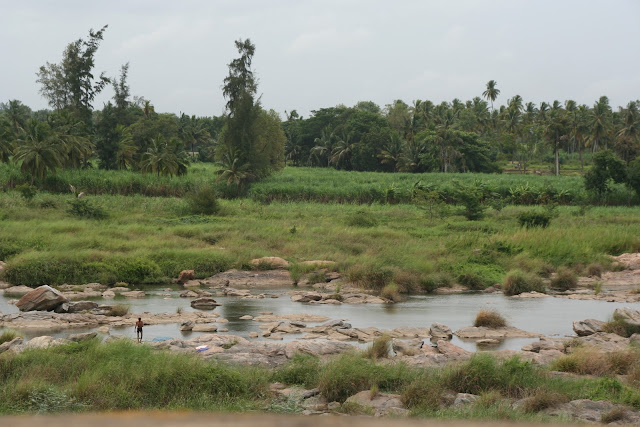 Srirangapatna is one of three Hindu holy islands on the Kaveri River.  It's actually a pretty big island, around 13 sq. km (5 sq. miles).  I rented a bike while I was there, which I would definitely recommend.  There are a few places offering bikes at good prices for a daily rental.  Most of the area is relatively bike friendly (by Indian standards of course)... its not too busy and the roads are small and narrow, keeping the average speeds low.  You just have to be careful crossing the main highway, and fortunately, there are speed control gates at the main intersection, which help a lot with the crossing. 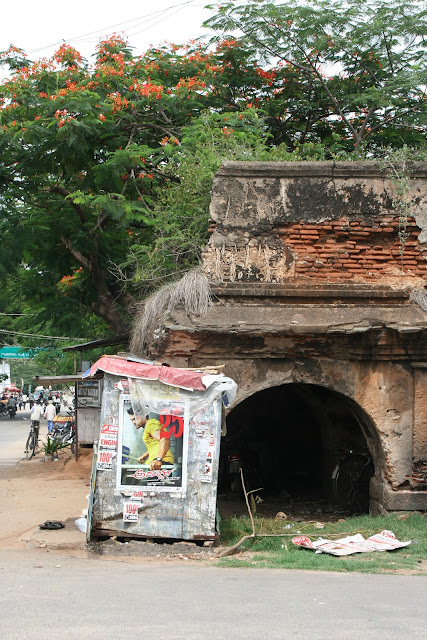 Another shot of the crumbling old walls around the town.  Srirangapatna has been a Hindu pilgrimage site for millennia, but it also played an important part in more recent political history.  During the British raj (colonial era), Srirangapatna was one of the last strongholds of Indian sovereignty.  This defiance ultimately boiled over with the capture of several British officers by the Indians that led to a very important battle in 1799, in which the local ruler of Srirangapatna, Tipu Sultan, was killed by the British.  After this, the British destroyed the palace at Srirangapatna and set up the future Duke of Wellington, Col. Arthur Wellesley, as the local dictator.  This history is not forgotten; many of the key sites in this series of important events can be visited around Srirangapatna.  And of course, the old fortress walls around the town serve as a massive reminder. 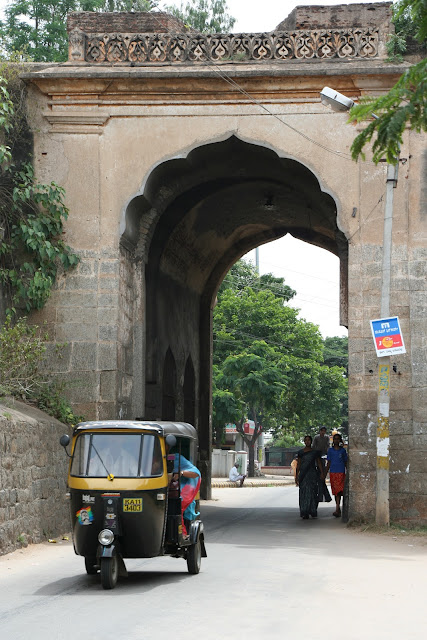 A classic example of an Indian arch and of course the ever-present rickshaw. 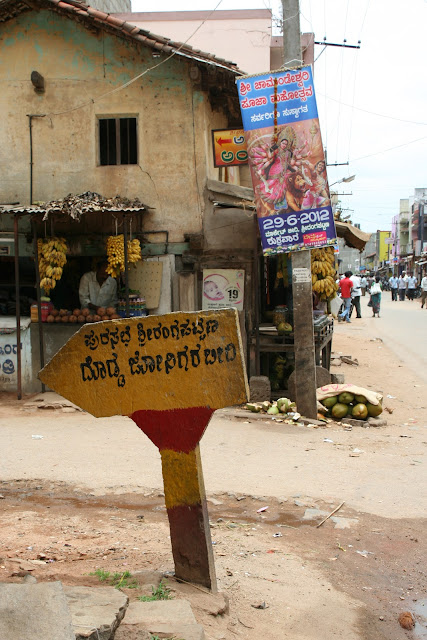 A shot in the center of town.  When I first got in, I went for some tea at a small local shop before picking up my bike.  The chai (spiced tea with lots of milk) in India is absolutely delicious.  It is dirt cheap (less than 10 cents per cup normally) and found everywhere.  Coconuts and bananas (also seen in the picture here) are just about everywhere too.  Coconut sellers set up at opportune locations, like railroad crossings and busy intersections.  Nearby these, you often find small mountains of empty coconut shells, which rot very slowly apparently.  It seems kind of gross at first glance, but they are completely natural and biodegradable, so I guess it isn't really hurting anything. 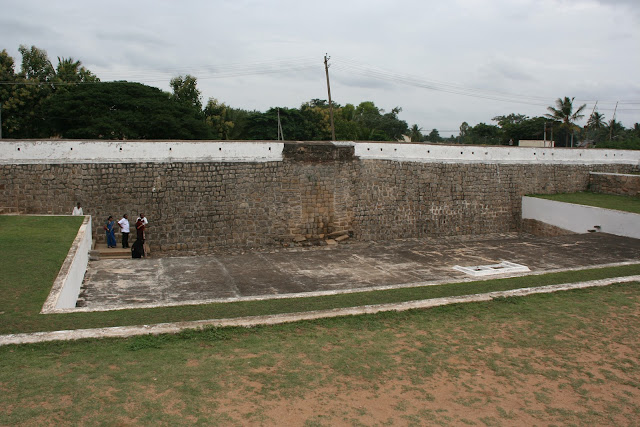 The old prison: it was here that Tipu Sultan kept the British officers captive.  The prison is actually down below here, and it would not have been a pleasant place.  The only saving grace was that it was out of the sun, though this kept it damp and cool, and probably outright cold overnight.  The prisoners were simply chained to the walls, and I'm betting they didn't have sleeping pads and definitely  not toilets.  Being so low, I'm betting that when it rained, the water probably pooled in places too. 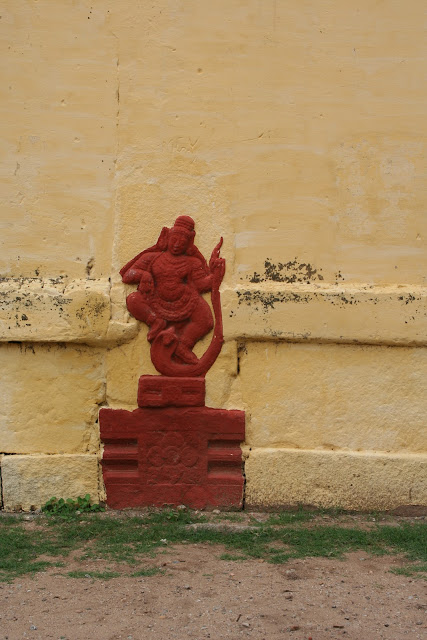 Srirangapatna is famous for its history, and is a particular point of pride considering its prolonged, outstanding resistance to the British.  Overall, though, Srirangapatna has, and continues to be, a major pilgrimage site for Hindus.  The current temple there is ~1200 years old! 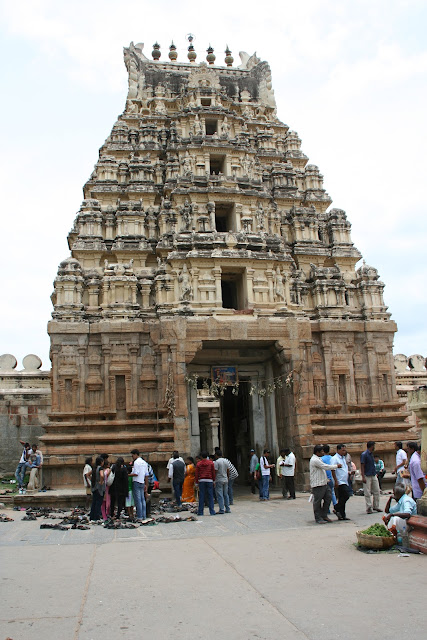 This is the main entrance to the temple, which is just a short walk from town and the bus stop. 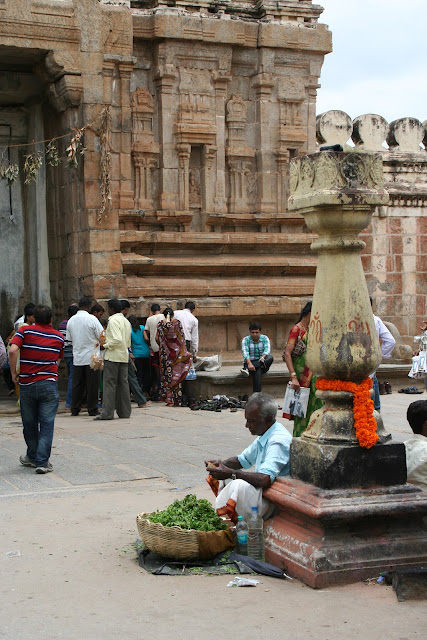 Beware of scams and overzealous salesmen outside of the temple.  The scams involve people collecting money to "keep" your shoes while you're inside the temple.  It is mandatory to take your shoes off outside and enter the temple grounds with bare feet.  I definitely suggest tipping these folks, but just don't let them (particularly the younger ones) charge you, especially if it seems extortionate (anything more than 20 or 30 rupees, ~$0.50, is too much since they aren't official in any way).  Also, make sure you don't pay more than one guy.  If you pay one and another comes over to demand money, just insist that you've already paid and point to who you did.  As for the salesmen, they can be outright offensive and very, very annoying in their stubborn persistence.  Just remember to be polite but firm and respect your surroundings, they might not be either polite or respectful, but you still should considering it is a holy place and you are a visitor there. 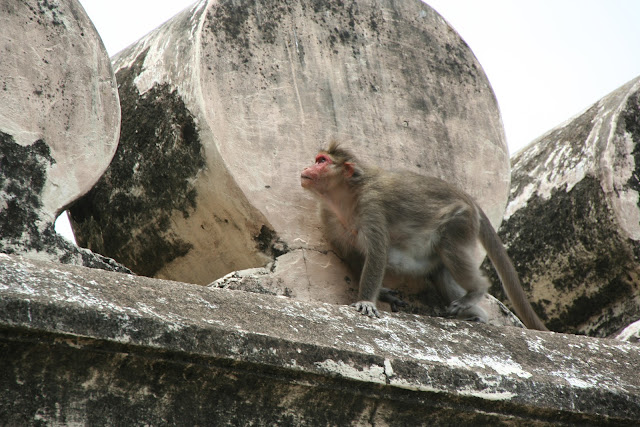 Temple monkeys: monkeys are tolerated at India's temples out of respect for Hanuman, the monkey headed deity that was a faithful friend of Rama, one of Vishnu's incarnations. 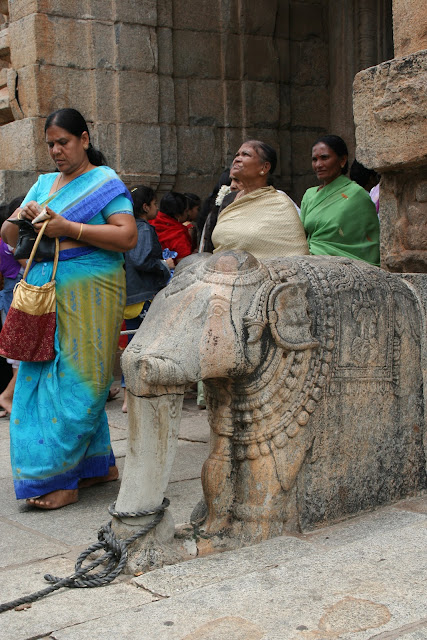 Several of these beautiful carved elephants were found around the inside of the temple complex.  The temple was very, very busy too.  The people queued up quite courteously though by Indian standards, and the line moved pretty well through the temple itself.  Unless you are a devote Hindu, I wouldn't recommend the wait though.  The grounds are pleasant and much less crowded, and even inside the large temple itself, you can just step out of line and find a nice place to watch the devoted at worship. 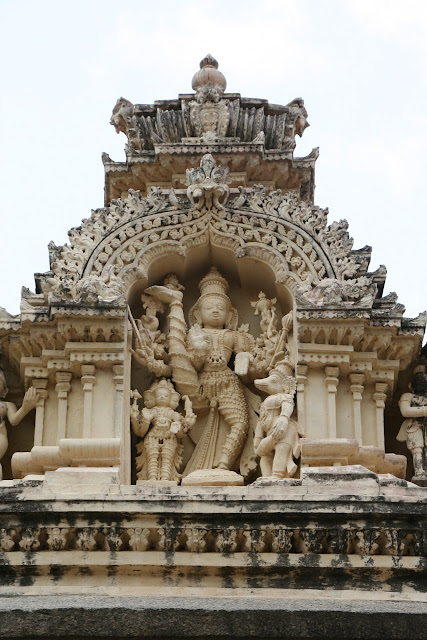 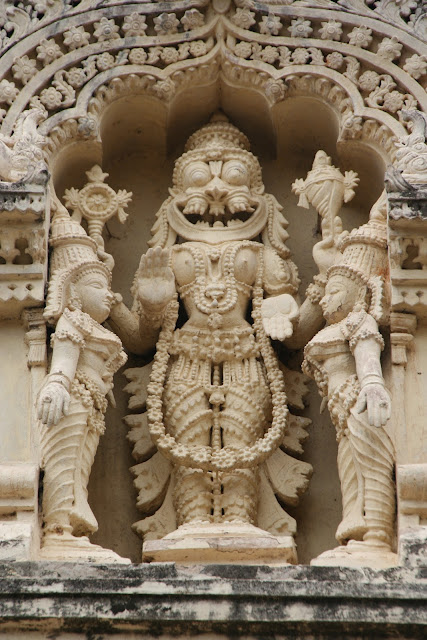 I don't know which deity this demon-headed one is.  Though it is seen all over the place... quite the mouth on it there.  I'm pretty sure it is female too based on the breasts and hourglass figure. 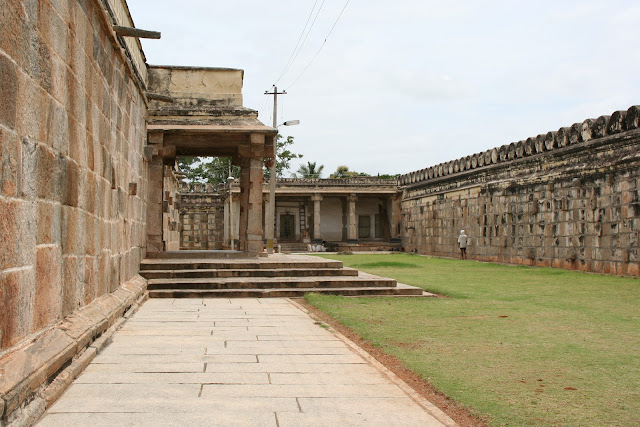 As I mentioned before, the temple grounds are peaceful and quiet. 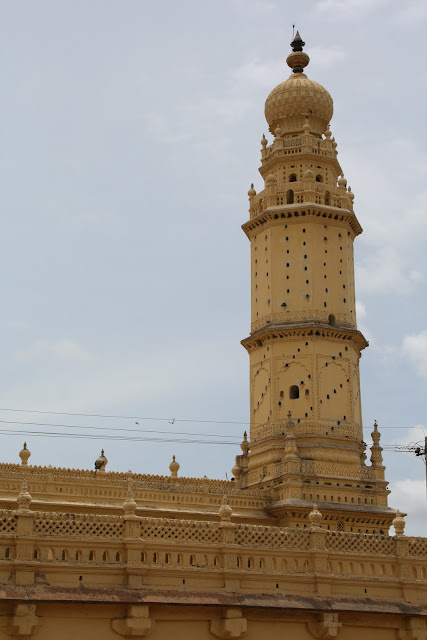 Srirangapatna also has another beautiful religious building, but this one is for India's other dominant religion.  The Jumma Masjid mosque is literally on the other side of town from the Hindu temple.  It is an impressive building, with plenty of geometric architecture and two of these large, intricate minarets. 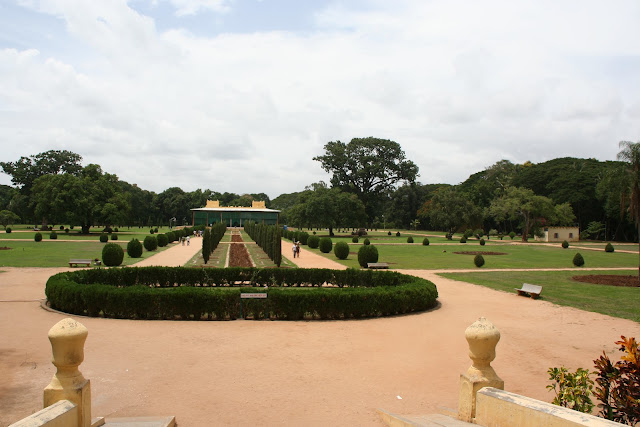 Outside of town and the old fortress walls and across the highway, you can find Tipu Sultan's summer palace, Daria Daulat Bagh.  This place is pretty neat, with pleasant gardens and a deceptively impressive palace right in the center of the complex. 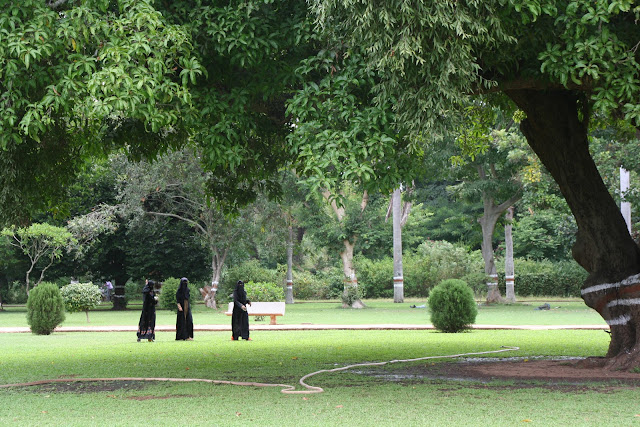 There are several massive, old trees that provide shade from the oppressive sun.  This was also the first I saw fully covered Muslim women in India. 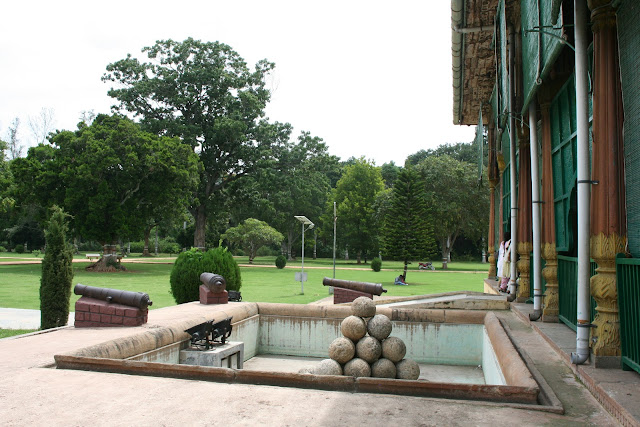 After the British took control of the area and killed Tipu Sultan, they turned the summer palace into the administrative center.  It was here that Col. Wellesley lived and ruled.  These old cannons are a reminder of this role and also of the area's bloody past. 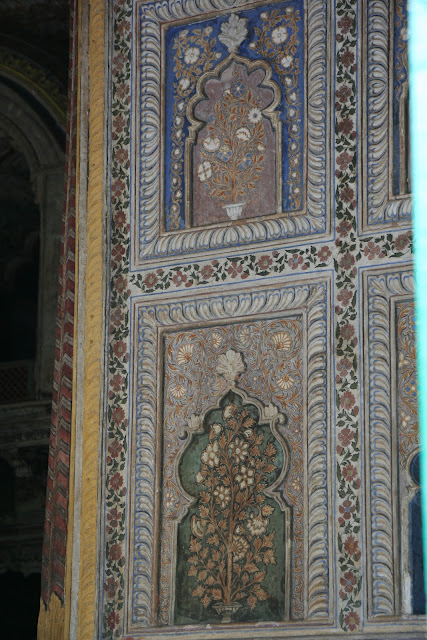 So the palace looks quite drab and actually kind of ugly from the outside (see below).  The reason for this is the presence of hanging shades that block all views of the details inside.  Once you get inside, you find an intricately detailed paint job on just about every surface.  The shades are required to protect these paintings from the sunlight.  Pictures aren't allowed inside, so I took the above shot from outside looking in through a gap in the shades.  It does little justice for the sheer magnitude of the details painted throughout the interior, but it at least gives you an idea of what I'm talking about.  There are also a couple of giant murals inside, one depicting the battle where Tipu Sultan captured the British officers and another showing Tipu's army in full parade.  Srirangapatna is really an impressive place when you let yourself be immersed in the rich history of it all. 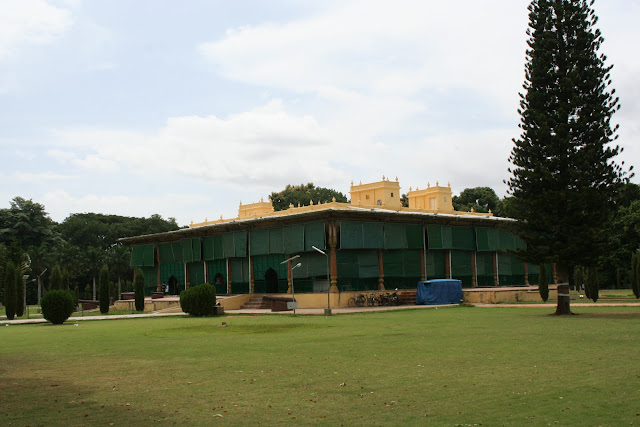