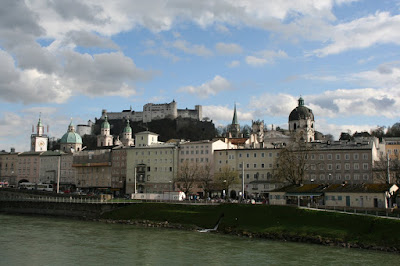 Just across the border from Germany, north of the Alps, is the city of Salzburg. It's a beautiful and very well-preserved old city with a very interesting history. 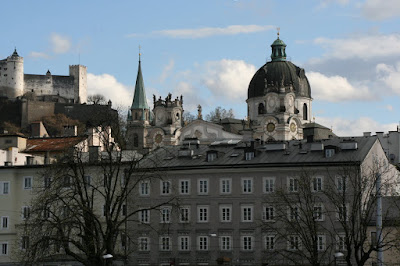 2 things dominate the skyline in Salzburg center, the Altstadt (old town): the Prince-Archbishops' Castle (Festung Hohensalzburg) on the hill and all the churches. Can you guess who ran things in Salzburg back in the day? 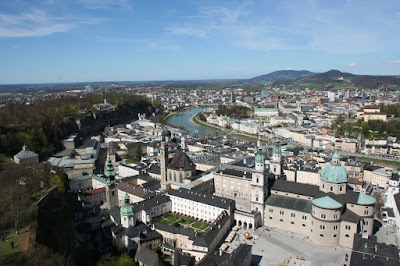 Looking down on the city from the castle. Salzburg is a great city to just walk around. Missy and I were there three days and got to see much of it without any need of buses or taxis. The buses are pretty good though (except in the relatively car-less Altstadt), with plenty of options both local and within the region, including Germany. 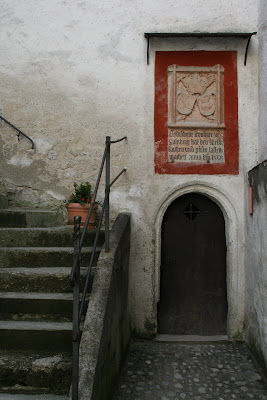 The castle is well worth the walk up the hill. There are museums and fantastic views. Plus, there is plenty of history on that hill; a fortified castle has been on this hill in Salzburg (the city name itself means Salt Fortress) since 1077! 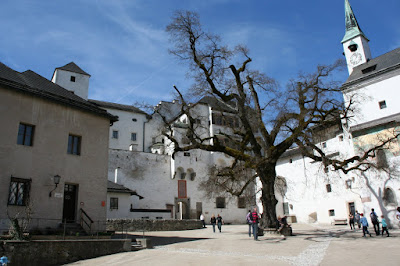 In the castle's courtyard...those trees were great 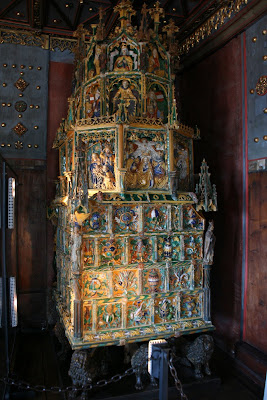 The Prince-Archbishop's oven and furnace to keep the royal quarters nice and toasty warm. It's amazing how much money (and power) these old rulers wielded. 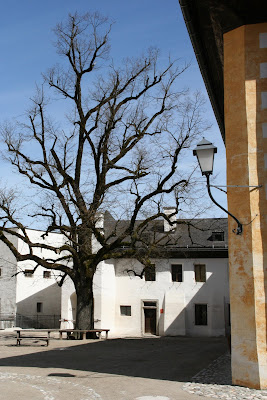 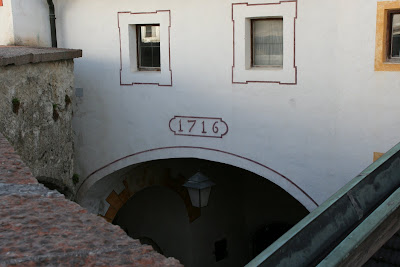 Different parts of the castle have been added and altered over the millennium that is has been around. 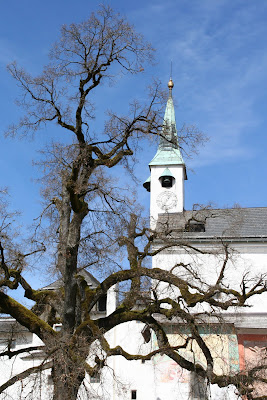 Can you tell I liked the trees? 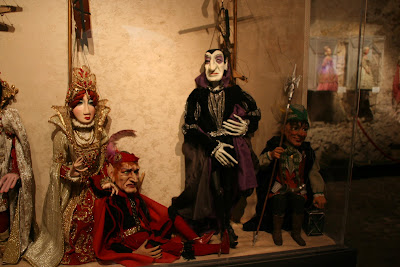 There is a marionette museum in the castle...random but pretty cool 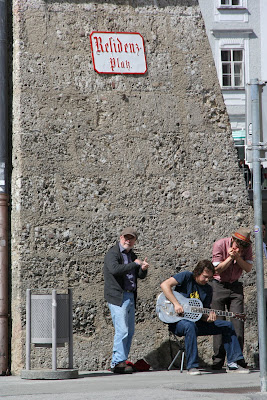 In the Altstadt, which is a neat mix between wide open squares near the churches and narrow lanes and streets walled in by tall row houses. There are these great passageways going under a lot of the buildings as well...it makes you feel almost like you've stepped back in time! 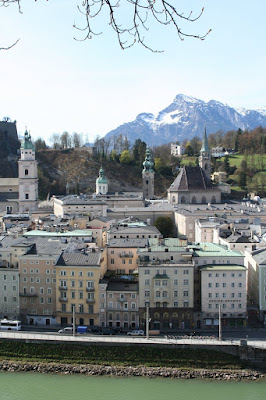 There are more historic sections of town across the river...if you can, search out a staircase that seems to disappear into one of the buildings...it's actually a public stair (despite its appearance) that leads one up to a park and great views over the Altdstadt and the rest of Salzburg. 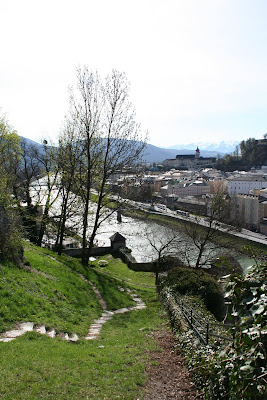 This whole mountainside seems to be parkland and the staircase leads right up to it...there is this old defensive wall that wraps around it too. Beautiful views and a great escape from all the people too! 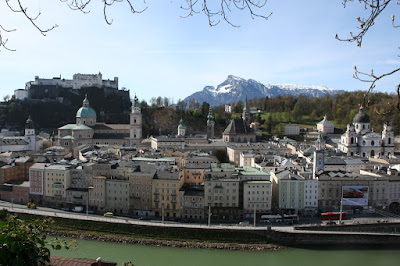 Like I said, incredible views down on the city. I had no idea that the mountains were so close until we got up here. The wild thing is that the mountain in the background is also visible from Berchtesgaden...it's wild how close things are in Europe. I'm very accustomed now to the vast distances of North America. 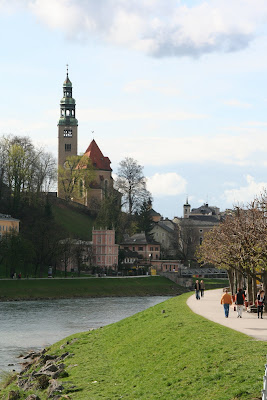 Oh what a pleasant view around the river bend....and if you wander over to that church on the horizon you'll find... 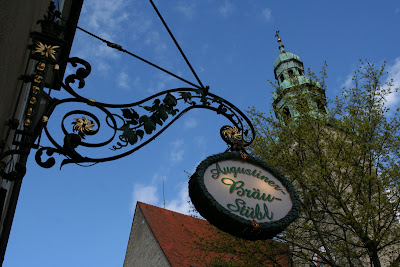 The best beer house EVER 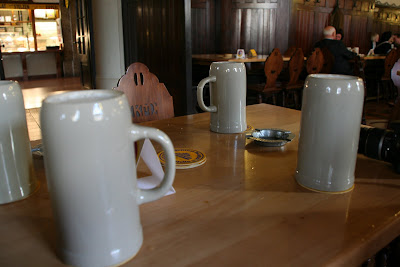 Run by Augustine monks...for centuries now... the Augustiner Braustubl is one of the highlights of my visit to Salzburg! The place is a big complex across the way from the Augustiner church. You enter through a series of corridors, hallways, and staircases and find yourself in what feels like a massive beer hall in a basement enclosed on two sides by Earth and on the other two by a long corridor with food stalls, washrooms, and THE BEER. Everything obviously culminates in the beer since you come around the corner and face an open area centered around a large fountain with a big rack full of empty ceramic beer mugs, a man at a cash register, and two men operating two massive oak casks and slinging out frothy mugs of fresh, monk-brewed beer. The system works like this: 1) grab a mug from the racks; they are dirty and empty. 2) take the mug to the giant central fountain and wash your mug until personally satisfied with its cleanliness. 3) take the mug to the cash register and tell the man what kind of beer you desire (light or strong); get a receipt. 4) take the receipt to the men at the casks and get your clean mug filled with delicious, monk-brewed beer. 5) don't slip on the tile floor as you stroll out to the beer hall with your beer. 6) try and find a seat with whoever and enjoy! AWESOME EXPERIENCE! We ended up inviting this Austrian farming couple and their Czech farmhand to join us at our table. They shared their fresh deli meats (literally fresh from the farm and their personal butcher), butter, and bread while we talked about life over the mugs of beer. Priceless cultural experience. When in Salzburg, you must seek this out. A good friend and colleague of mine told us about this place before we left for Austria; he is from Salzburg, so we knew it was a good tip. It's called bosna, and it has apparently been a Salzburger institution for quite some time now. Apparently, Bulgarian immigrants to Salzburg combined their favorite combo of spices with the Austrian love of ground saussages to produce this: the bosna...amazing. There is only one "best place in town" (of course) and it is in the small passageway across from the ice cream shop just past the McDonalds....you'll know what I'm talking about if you actually are there and just explore a bit. You'll see a sign down the passageway marked "Bosna"...thats it. If its the same woman we got...she doesn't speak ANY English (fair enough!) and you'll just have to point to what you want. Get the original. Soooooooo good 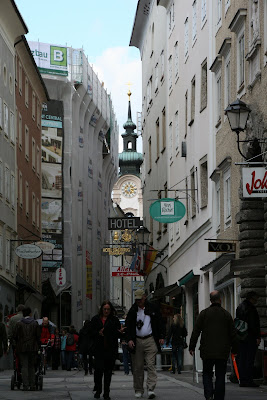 We stayed in the small hostel attached to the church in the background here....great location. The town is lively...lots of tourists (almost too many for comfort actually). It's all very relaxed and peaceful though, and the Austrians working everywhere at least make you feel welcome for the most part. 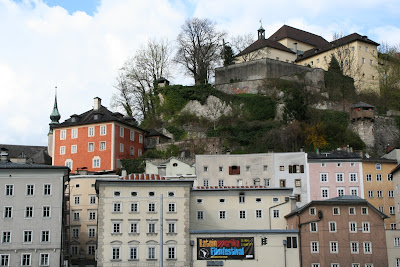 The old city is beautiful...I can't stress that enough. This is looking at the section of town with the stairs I mentioned earlier. They go right up the hill you can see here. Also in this area are: 1) the brothel that has been around since Roman times (along the road that has also been along so long); 2) bars carved into the mountain; yes, the back walls are actually carved out of the rock; 3) a building at a particularly narrow part of the lane with massive scars at the foundation, reputedly from the American tank during the occupation that was attempting to navigate between the buildings and mountain on the old Roman road to get to the brothel...true story 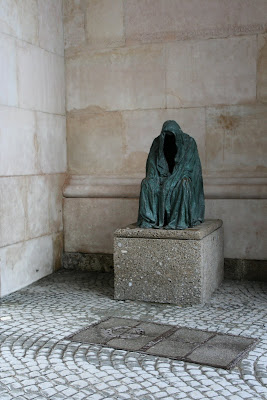 The cloak of peace...a very neat statue at one of the churches...reminded me a lot of Lord of the Rings 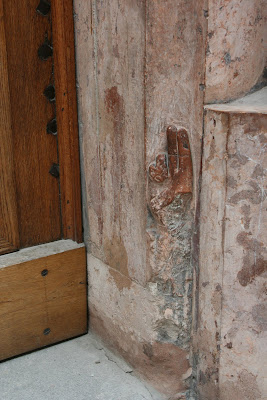 Just outside the Franziskaner Kirche (Franciscan Church) is this carving of a hand.... it is the hand of asylum. ANYONE who was running from persecution for ANY crime could run to this church, and so long as they touched this hand, they were granted asylum. I'm probably making it out to be more dramatic that it was, but I imagine all sorts of folks, the Robin Hoods and Bonnie and Clydes alike who made their way here, running from the local enforcement and making a diving reach for this hand of safety. I also have pictures of them finding the church doors closed and barred and an already strung noose or sharpened axe of the enforcement working FOR the church.... 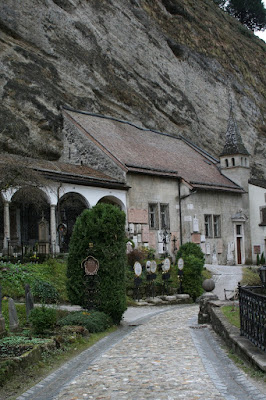 They are big on building right into the mountain in Salzburg, as this church is testament to. There are also catacombs here within the tunnels, which came highly recommended. They were closed for renovation when we were there unfortunately, so I cannot comment further. 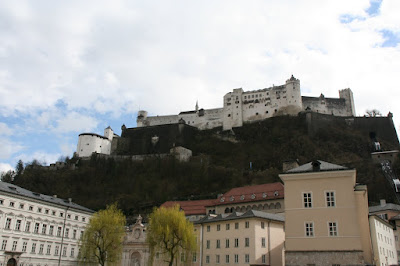 Another view of the castle looming overhead, always reminding the lowly Salzburger of who was in charge... 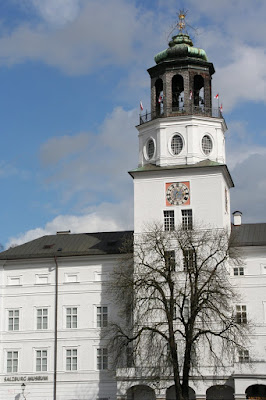 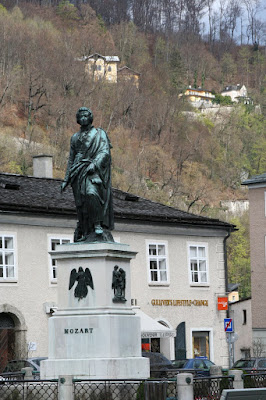 Mozart: they have a SERIOUS obsession with him here, as Salzburg was his birth-city. They also have an obsession with the Hollywood hit the Sound of Music. That is all I will say on either of these topics and far-overly-done tourist draws. 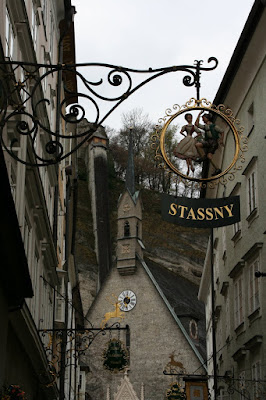 A cool thing about the Altstadt is the regulation that all businesses must have an old, iron-wrought sign...even McDonalds. Some of them are obviously very old and quite original. Overall, I'd highly recommend Salzburg...its a bit over-touristy at times, but you can still easily escape that and drift off into another time.
Posted by Drew at 8:44 AM