Rio de Janeiro (pronounced heeo-dgee-janeiro in Brazillian Portuguese). This place totally rocked my expectations. Coming into Brazil, I didn't know what exactly to expect...I thought of Rio as a very dangerous city, and in many ways it is. In many ways, it's not at all though, and I found the majority of people I interacted with to be beyond friendly, nice, helpful, and proud. I thought of Brazil as a place of beauty, and my expectations were far exceeded in that aspect. This is the start of my month and a half journey through South America, and what a place to start: Rio...the opening picture here shows the world-famous, iconic Corcovado (topped by the Christ the Redeemer statue) and its jungle shrouded peak (really a massive state park in the middle of the city!). In the foreground is one of Rio's equally famous and notorious favelas, or slums. This past month, Rio became the center of the world media attention when the police cracked down on some of the drug lords and gangs that rule over the various favelas. What ensued was a small-scale war. It's really hard to believe that such brutal and horrible things go on in such a beautiful city, but it is a big city. To be honest, Missy and I were quite cautious not to venture outside of the "safe" areas. However, we did walk around and travel the city via public transport on our own. We went out at night and took taxis. We enjoyed ourselves and only followed our normal, common-sense approach to safety. All this and the entire time we kept remarking how familiar and comfortable we felt there. We had practically no problems. So, I guess Rio is a two-faced city, a place of dichotomy. There is the safe (and relatively wealthy) side of it, which we came to love and enjoy, and there is the dangerous (and mostly poor) side of it, which we really only glimpsed on our bus rides to/from the airport and the rodoviaria (city bus terminal) and from afar when we saw the favelas clinging to the mountainsides. 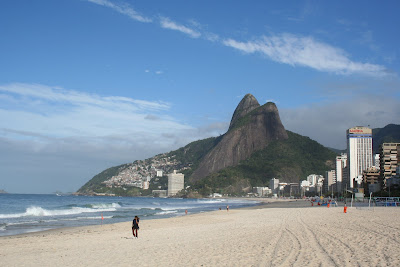 The view from Leblon beach, where we found a great little hostel to shack up in for the first few days. These mountains are incredible! They reminded me something of those bizarre peaks from the Li River area in China, but the scale was quite different. The mountains permeating the landscape of Rio are enormous and incredible steep. Yet, somewhat miraculously, the people of Rio have built all around and much of the way up them. They are truly a part of the city, surrounding you and never letting you forget where you are.

The people of Rio seem quite active. There are ongoing games of futbol on pitches (official and otherwise) all over the city (and the beach), and along the beaches, there are always people jogging, power-walking, working out, or playing volleyball. They have a great climate there, and they enjoy it. The ever-present and wonderfully unique Brazilian flag is most often visible somewhere too. 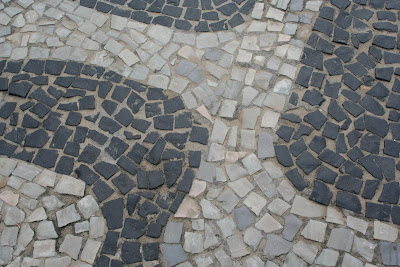 Each beach has a distinct tile pattern for the sidewalks. This is part of the pattern at Leblon. Every hundred meters or so there are also little food and drink stalls right on the beach, which is great for a fresh coconut drink, cold beer, or street food snack. 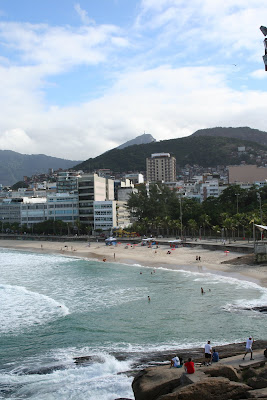 The view back on Ipanema from Arpoador (the rocky outcrop separating Ipanema and Copacabana beaches). The Corcovado is seen in the distance...it is incredible how it is visible from so many different parts of the city. 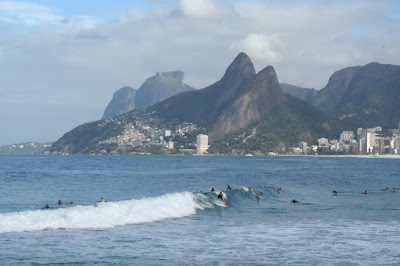 Surfers shredding it up at Arpoador. They didn't even need to paddle out...they would ride a wave in, then walk out on the rocks and jump back in beyond the break point...probably have no idea how lucky they are! 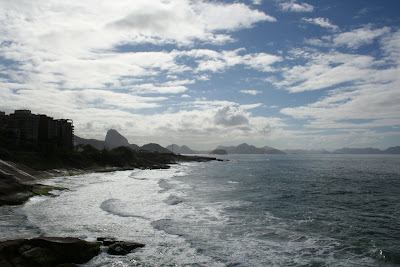 Looking towards Copacabana and the famous Guanabara Bay. Sugarloaf Mountain is the tallest in the background there. There is a cable car up to the top, which is supposed to be spectacular at sunset. Missy and I didn't make it up due to time and also because I've heard it is quite touristy, and we got our fill of that (the cost for the great views) at the Corcovado. We will be returning to Brazil, so maybe we'll catch a sunset from up there then... 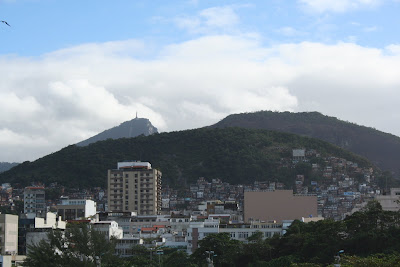 Another view from Ipanema...this shows how the city just climbs up the mountainsides. 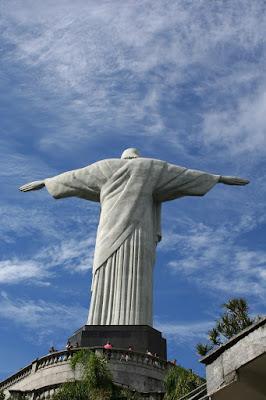 Up on the Corcovado looking at the backside of Christ the Redeemer...it's pretty big. 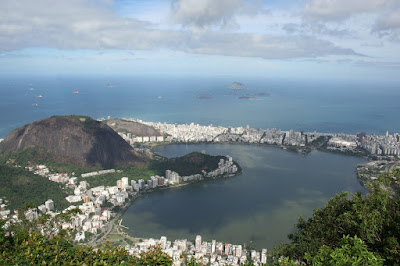 Looking down on Ipanema and Leblon from the Corcovado. Supposedly, Ipanema means dirty water in the old native language and is called so because of the bay seen in the picture here. 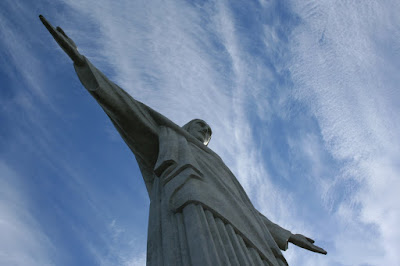 We were lucky to have some great weather up there...the clouds were coming and going, but at least we could see. Apparently it had rained almost non-stop for the week before we go there! 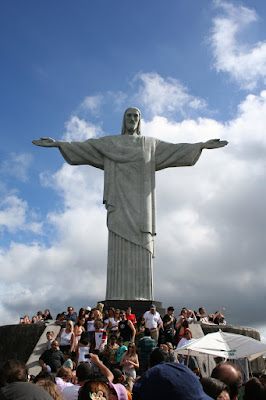 Yay, hordes of inconsiderate tourists! Just what I absolutely love. These people pretended they were the only ones up there...absolutely ignoring the other 20 some-odd people within a 5 foot radius of them. Worst of all were the ones who decided to imitate the Christ statue and stood with their arms out while one of their idiot friends laid on the ground to get a picture of them in place of the statue...so basically, they took up about as much space as two people could in the crowd. Missy and I started out by being respectful of their ridiculous ways, but by after about a dozen of them stayed in position for much much more time than it takes to get the shot, we stopped caring. Like all the people seen here, I was definitely a guest star in many a "look I'm Christ the Redeemer" shots. Oh well. 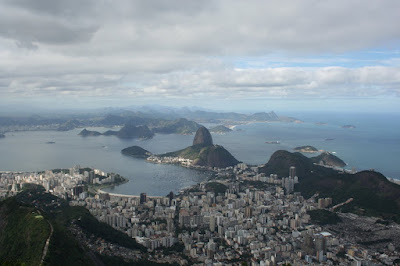 Looking down on the city center, Sugarloaf, and the amazingly beautiful Gunabara bay. 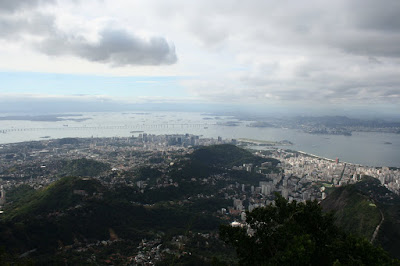 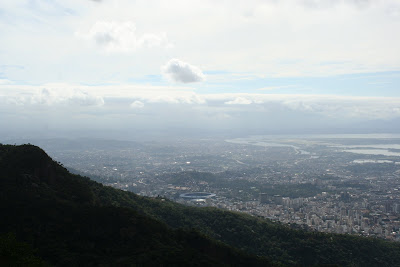 Now more northwest...the enormous soccer stadium is seen in the lower center here. It is the biggest in the world, and will be one of the venues for the 2014 World Cup, which Missy and I WILL be returning for! Unfortunately, it is in a bit of a rough neighborhood, so it is best to arrange tickets and transport through the place you are staying (they all provide this service to enjoy the national sport). 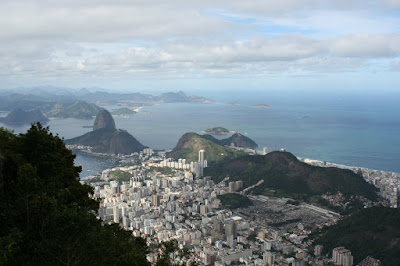 Couldn't really get enough of it up there...that is til the other tourists drove you absolutely mad. 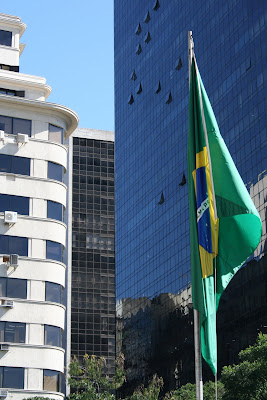 Centro...downtown Rio. Missy and I wandered around here a bit. It was a week day and it had the feel of many other major cities...very business oriented. 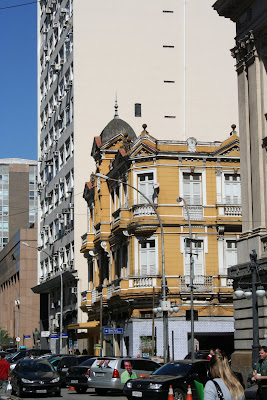 There are these awesome old colonial buildings sprinkled all around though, which I loved. 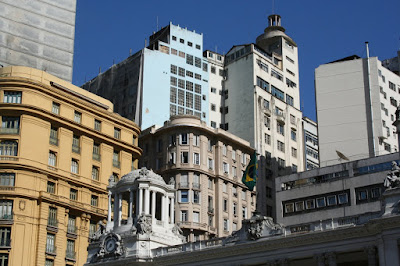 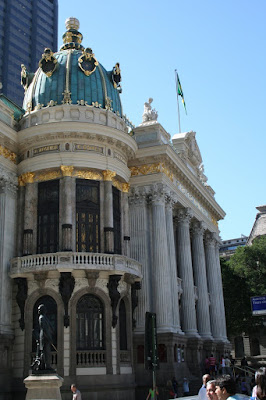 Teatro Municipal, the central theater. We didn't catch a show, but the cafe is pretty sweet. 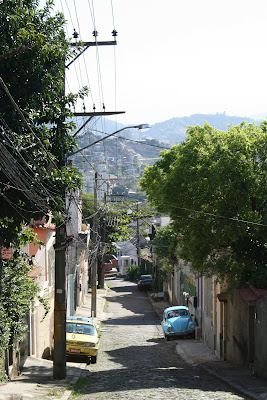 The favela of Santa Teresa. Yes, I said favela, and yes, Missy and I went there on our own and just walked around. Santa Teresa is a middle-class favela and is quite safe. It's beautiful too, and there are some great little places to eat or enjoy a nice coffee, juice, or cocktail. 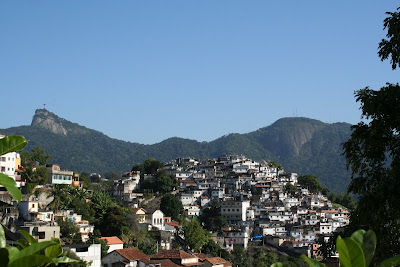 Looking at one of the neighboring favelas. The views out over the city from Santa Teresa were awesome. 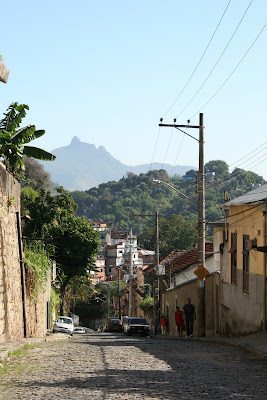 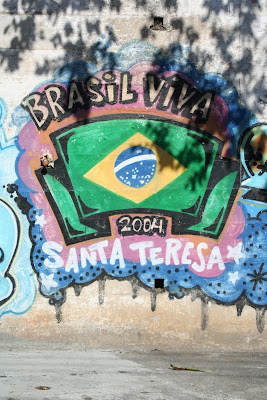 As we found in Colombia...Rio (and the other big Brazilian cities) have some very, very talented street artists. Santa Teresa had some awesome murals and pieces, but true works of art are scattered throughout the city. Keep your eyes peeled on the buses, you'll see a ton. Our favorite was the modern-day Wizard of Oz mural (we were on a bus though and didn't snag a picture in time). It featured more modern takes on the main characters skipping down the yellow-brick road, with Dorothy jamming to her iPod and the Tin Man wielding a chainsaw...amazing stuff. 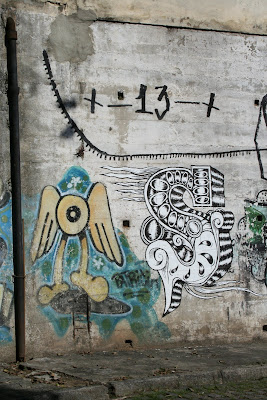 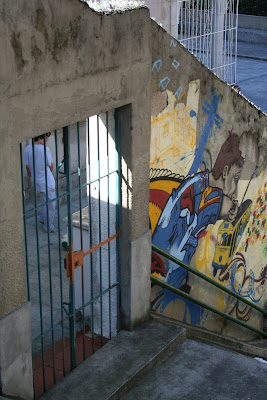 Notice the kids playing soccer through the gate... 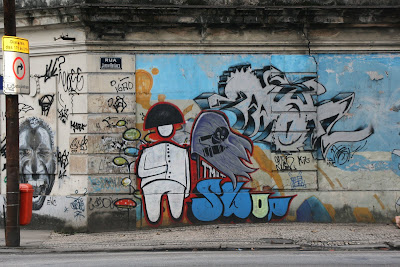 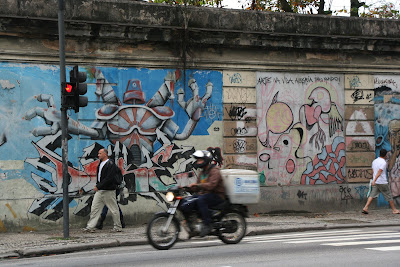 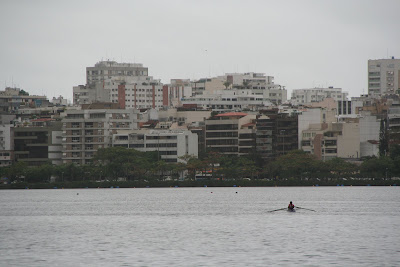 Rowing in Ipanema.
Posted by Drew at 9:11 PM