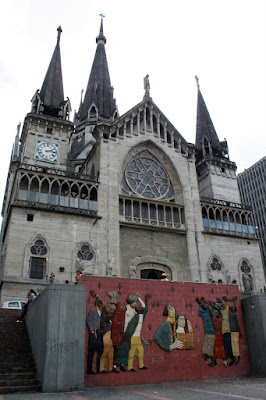 Manizales: After another spectacular bus ride along the edge of the central mountain range and through the heart of Colombia's coffee growing region, we arrived here. The city of Manizales is a very interesting one; the city center is perched atop a ridge line, with the wealthiest districts and neighborhoods, including the fair-sized university, at the top and increasingly poorer and poorer ones as you go to lower altitudes. I've never seen a place where the social stratification is manifested in such a symbolic way. Despite this, the city was nice and so were the people. Pictured here is the neo-Gothic cathedral in the main square. The cathedral is made out of concrete instead of the classic, cut-stone. The detail is impressive, and the concrete is interesting, though I must say I prefer stone. 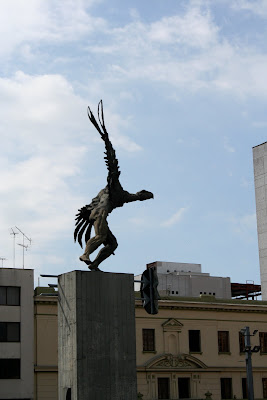 This is the dark and somewhat terrifying statue of Simon Bolivar in the main square outside of the cathedral. Half-man, half-vulture, with a large face jutting out at the top of the base...adds to the Gothic feel of the place. 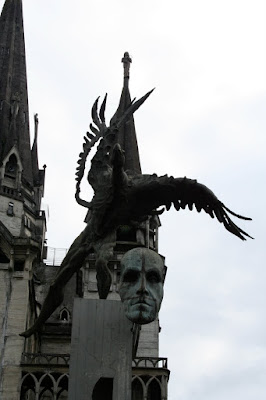 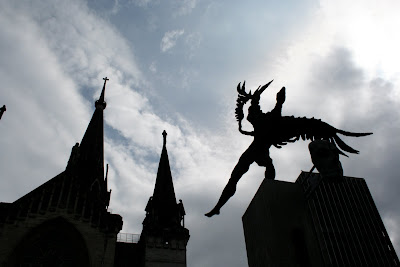 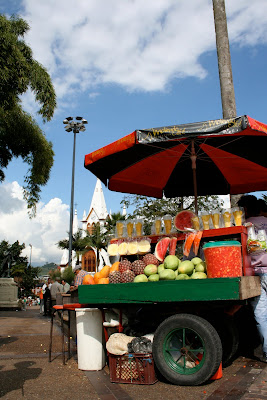 The ever-present fruit stand. The fruit in Colombia was amazing. They can grow practically everything there. I got hooked on the various types of smoothies they make with all the varieties of fresh fruit. We had an interesting experience in Manizales when we stopped for lunch at a little cafe. They had fruit smoothies available and a lovely selection of fruit. My favorites were guanabana, mango, banana, and the ever-present limonada (limeaide). So at this little cafe, I asked for a combination of strawberry and banana. The waitress at first did not seem to understand...she gave me a weird look and asked if I wanted two: 1 banana and 1 strawberry. So, I tried to explain in my broken Spanish that I wanted them both combined together with milk. The lady then gave me an outright look of disgust and warned me that it might not be good. We realized then that strawberry banana must not be a combination they've tried there in Manizales. We reassured her it was what I wanted and tried to convey that we knew it should be delicious...and it was. We tried to get the waitress to try it, but she just couldn't get over such a "strange" combination! 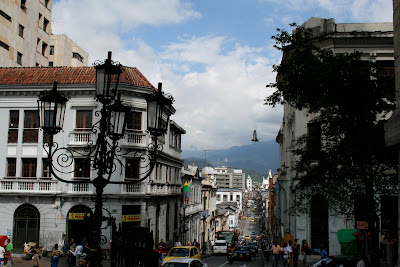 Looking down one of the main boulevards from the Plaza de Bolivar (where the cathedral is). Following this down off the ridge, you will start to enter poorer and poorer areas. Unfortunately, other than the bus station and the cab ride up, we didn't spend any time off of the main ridge. We did have another interesting time in Manizales though. On our walk back to our hostel around 4 in the afternoon, we decided to stop at a bar that had a nice little area out front by the sidewalk. We grabbed a "giraffe" of beer (3L in a really tall tube with a tap at the bottom) for our table and then sat outside to people watch since the weather was just about perfect. However, we turned out to be the most interesting thing to watch apparently. Everyone who walked by just stared at the five of us gringos, just sitting there drinking our beer and trying to watch everyone watching us...which just turned out to be a bit awkward. Apparently, the European style of sidewalk cafes and people watching isn't the norm yet in Manizales. 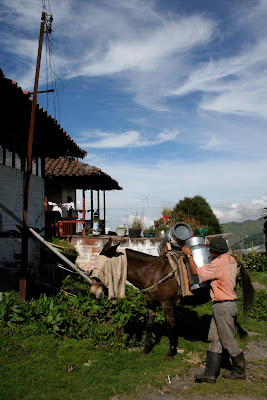 We were in Manizales primarily to gain access to the Los Nevados National Park, which houses a series of massive, glaciated Andean volcanoes. The safest way to do this at the moment is to go with a tour. As you know, I'm not big on organized tours, and thanks to my time in Ireland, I have a particularly accute hatred of tour bus groups. However, I had to give in on this one in order to get up to Nevado del Ruiz, an enormous volcano (still active) at 5,300 m (17,388 ft) of elevation. We woke up early the morning of the tour and got picked up at our hostel, which was nice. After a long ride up through beautiful green countryside, we stopped for breakfast. First thing we saw when we got off the bus was this guy attending to his mule. We had found Juan Valdez! 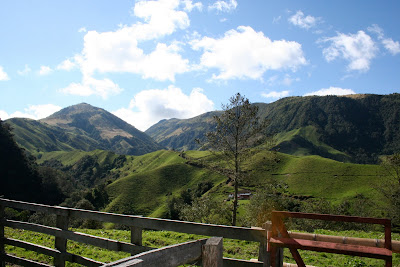 We also found ourselves in this spectacular setting. The phrase "God's country" came to mind a lot while I was traveling through rural, central Colombia...I think that really says something about a place. 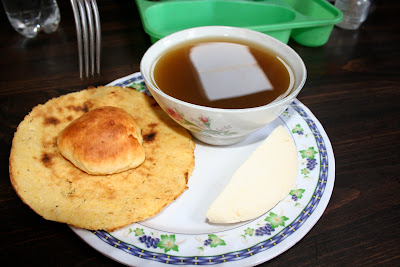 Our breakfast: fresh bread and cheese curd served with a sweet, malt broth that reminded me a lot of beer wort. Good and filling all around. 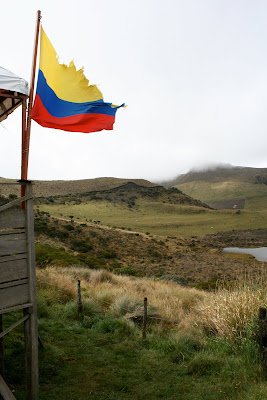 We ascended higher and higher, and the landscape kept changing with the altitude. We're above tree line here and just over the elevation range where Colombia grows it's potatoes. As we went up, we just moved further and further into the clouds that shrouded the summit. 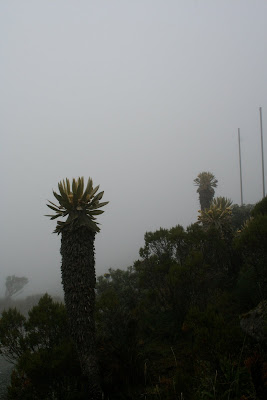 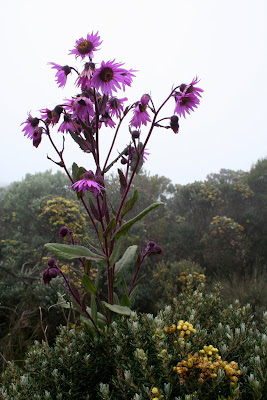 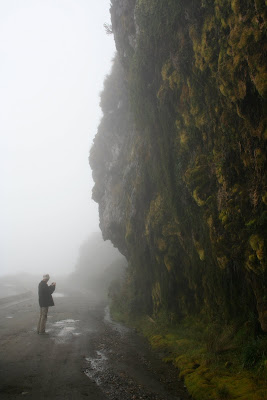 We made several stops on the way up so that people on the bus could get a chance to acclimatize to the thin air. Despite this, we still had a young girl who suffered from altitude sickness. Coming from Colorado, and having spent several days at 8700 feet above sea level, we managed just fine. 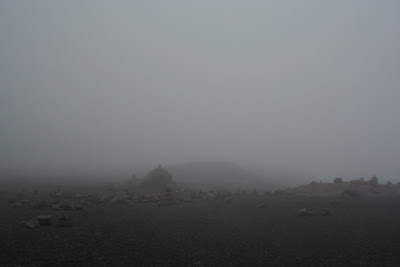 They called this place the "surface of the moon". People visiting here had made all these rock cairns, which would definitely be helpful in the event of wandering off too far into the mist. The landscape was surreal. Being a volcano (which had its last major eruption in 1985), it was very different from the mountains we were used to in Colorado. Unlike the large boulders and slag that make the top of Colorado mountains feel like a large rock pile, Nevado del Ruiz has this fine, dense top soil of ash and crushed rock. It really did seem like we were on a different world. 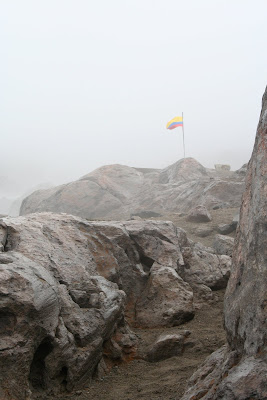 Finally to the hike. The bus took us up higher than any of us had been before: just over 15,000 feet. We hiked the last bit, just under 2000 feet vertical to right around 17,000 feet altitude. They forced us to go slow to avoid overexertion, which was fine by us since we were really enjoying the whole experience. 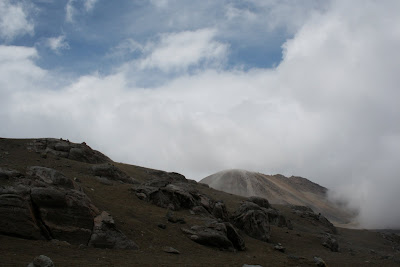 The clouds passing over the mountain somewhat cleared at times, giving us a better view of our surroundings. 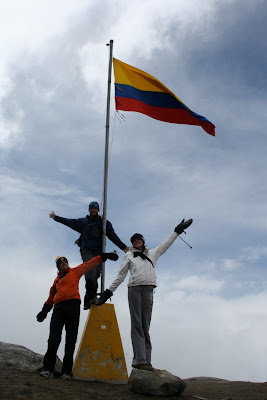 Tiffany, Jack, and Missy enjoying themselves. Despite being just a few degrees of latitude above the equator, it was very cold up there. We packed warmer gear specifically for this one-day event. 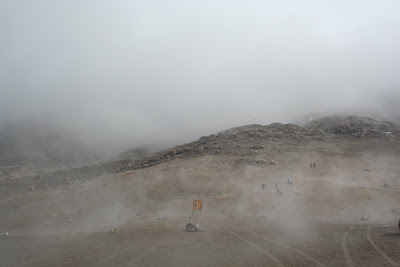 Looking up...note the size of the people up there. 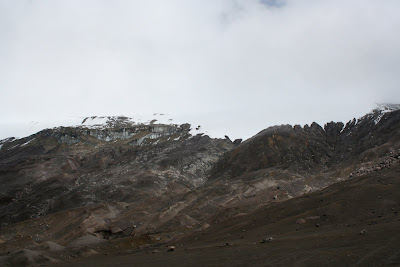 Looking back at where we'd come from. The snowfield at the top here blends a bit into the clouds, but our hike brought us up to that line, which is at just under 17,000 feet. To go on to the summit, they suggest at least crampons and an ice axe, and the tour guides do not allow their customers to do it. You need to hire a personal guide if you want that privilege. Despite this, we had a great day and really enjoyed ourselves. The hot springs we stopped at after dinner just made the day too...it was nice to relax in the geothermic heated pools after the hike. Unfortunately, the place we stopped for dinner gave Missy and I food poisoning, but I'll get to that in the next post. Anyway, if you go on a tour, be wary of the mass produced food at the "restaurant" you stop at for dinner.
Posted by Drew at 9:34 PM

Hi! I'm going to colombia in March and considering a trip to the coffee region. what tour company did you go with to hike nevado del ruiz? how much did it cost? Thanks! I'm at cslassen@gmail.com