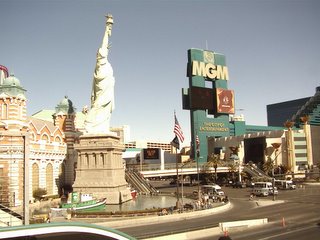 So this past weekend (26th-28th January 2005) my friend Rob and I went to Las Vegas for his 23rd birthday! We stayed in the Luxor pyramid, which was incredible, and we did the normal Vegas blitz: 2 days of gambling, shows, drinking, clubbing, and of course, sleep deprivation.
This was my second trip to Sin City, and I loved it every bit as much as the last time.
This shot, is a view of the Statue of Liberty in front of New York, New York, with the MGM Grand across the street. It was taken from the walkway between Excalibur and NY, NY. 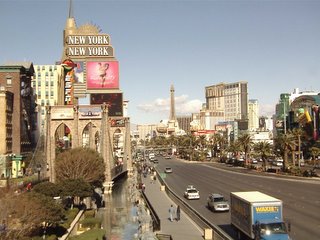 This is a view down Las Vegas Blvd from the South end of the strip looking North. The Brooklyn Bridge is on the left at NY, NY. The Aladdin and Paris' Eiffel Tower and hotel can be made out down on the right, with the Flamingo in the far distance. The Strip is really, really long. I made the trip from the Luxor down to Caesar's, Treasure Island, and the Imperial Palace several times while we were there (the Imperial Palace is my favorite casino for gambling as my luck there hasn't lost me money yet!), and by the end of the trip, the bottoms of my feet were bruised and the toes very blistered...it was still so worth it though! 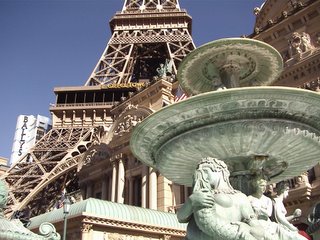 This is my artistic shot of the fountain in front of Paris with the Eiffel Tower in behind. I know...its good... :P kidding! Anyway, I just love seeing how all the casino's have spent rediculous amounts of money making the places so detailed, intricate, and unique! You can entertain yourself just wandering the casinos and not spending any money at all! My favorites are definately the Luxor, Caesar's Palace, and the Venetian. Caesar's and the Venetian have massive indoor malls that are themed around a Roman marketplace and a Venice canal, respectively. The Luxor, with its Sphynx, full sized pyramid, and ancient Egyptian decor is just incredible as well. Treasure Island has a free pirates show, which kicks serious booty (yeaaarg!) and Bellagio has a free fountain/light show at their massive outdoor lake. Inside the Mirage, you can find albino tigers, a MASSIVE aquarium with a ton of tropical fish, and a dolphin tank. And for those poker enthusiasts (like myself) it isn't too hard to catch one of your favorite pros at the various high stakes poker rooms...I just highly recommend NOT SITTING DOWN at one of those tables! I just watched...and those people are good...and have deep pockets. 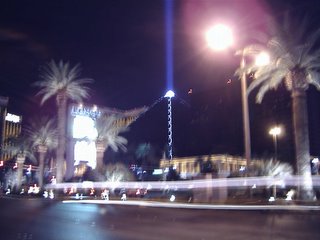 This is one of the only night shots that turned out half decent, which is a shame since the whole city glows at night. This was our hotel, the Luxor. The pyramid has that beacon shining at the top which you can see from anywhere in the city. Very nice for those nights that go a little too crazy, as you always know the way back to your room! 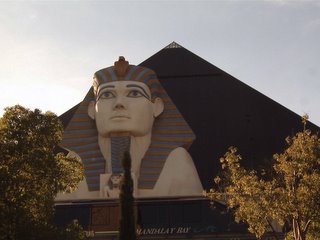 Here is the Luxor again...like I said, full-sized Sphynx and pyramid...amazing! I definately recommend Vegas to anybody and everybody! Its like Disney World for an adult! I also saw one of the shows, Fantasy, at the Luxor. It was quite entertaining (the comic relief was the best part), and yes, it had showgirls, who weren't too bad either (just not up close....definately a case of "nice from afar, but far from nice" for most of them). As for the gambling...I recommend just setting yourself a daily limit on that, and DO NOT GO OVER IT! Expect to lose it and if you do, then you hopefully had fun playing the games in the process. If you end up winning, then its all the more sweet, sweet victory! Oh yea, and I recommend craps...that game is incredible and if you play it right, it has the highest odds in the players favor of any game at a whopping 49.6%...and I think its one of the most fun and exciting games to play too!

I went to Vegas once a couple of years ago. I caught a Cirque de Soleil show and really enjoyed watching the fountain at the Bellagio. I didn't gamble much though, just enough to get a free drink and jet.

Thanks for the virtual tour of the hostel, Drew. It really means a lot to me to see where you are staying. On our trip to Ireland I tried to take a picture of each place we stayed in and it really helped a lot, later on, to refresh my memory of the place. Glad you are happy and comfortable! With love, Mom